Non-epithelial ovarian cancers are histologically and clinically distinct rare tumours, including germ cell tumours and sex-cord stromal tumours, each of which is subdivided into several histological sub-types (1). Female malignant ovarian germ cell tumours (MOGCTs) accounts for only 2–5% of all ovarian malignancies (2). MOGCTs can occur in all age groups, with peak incidence in young girls aged 15 to 19 years old (3). MOGCTs are histologically heterogeneous neoplasms arising from the primordial germ cells of the embryonal gonad. Most common MOGCT histology subtypes include dysgerminomas, immature teratomas, yolk sac tumours, and mixed germ cell tumours. Other less frequent MOGCTs include embryonal carcinomas, choriocarcinomas, and struma ovarii, the latter defined as mature ovarian teratoma containing 50% or more thyroid tissue (4,5) (Table 1). MOGCTs classically manifest clinically with palpable mass and/or abdominal distension, lower abdominal pain, urinary symptoms, and feeling of fullness in the pelvis. According to the histologic subtype, MOGCTs can frequently cause serum tumour markers elevation. Such tumour markers include lactate dehydrogenase (LDH), alpha-fetoprotein (AFP), and human chorionic gonadotropin (HCG). In addition to clinical findings and conventional histological material, immunohistochemical markers and fluorescent in situ hybridisation (FISH) are useful for the establishment of the diagnosis. SALL4 and OCT4 are widely used, whereas SOX2 can be used to diagnose embryonal carcinoma and neuroectodermal tumours of teratomatous origin (5-7). MOGCTs share many characteristics with male testicular germ cell tumours, though MOGCTs can frequently spread to the peritoneum, showing the same pattern as the epithelial ovarian cancer. After appropriate multimodal management, the prognosis is quite good, with 5-year survival exceeding 85% (5-8). The majority of MOGCTs are diagnosed while confined to the ovary (stage I), and these early-stage tumours can be treated with surgery alone. Surgical staging represents the first step in the management of MOGCTs. Surgical procedures include exploratory laparotomy, peritoneal washing for cytology, omental biopsy, unilateral oophorectomy, and selective removal of enlarged lymph nodes. Among MOGCTs, dysgerminomas have a high risk of nodal spread. There is no consensus about the role of systematic lymphadenectomy. Nevertheless, the omission of staging peritoneal procedures seems to increase the recurrence rate without affecting survival rates. Nodal debulking surgery is only required in cases of residual disease following adjuvant chemotherapy. Bilateral salpingo-oophorectomy and hysterectomy can be considered in women who do not wish to preserve the ability to have children in the future (6,9). Fertility preservation is an important issue because MOGCTs typically affects young women of child-bearing potential. Fertility-sparing surgery is the mainstay of treatment in early-stage disease and can be also proposed in advanced stages after careful discussion with young patients who desire pregnancy (10). Cisplatin-based chemotherapy with surgery can provide good outcome even in the presence of advanced or incompletely resected disease (11). The role of second-look surgery is not entirely clear, but resection of residual teratoma represents the main indication (12). Centralisation of care can further improve the clinical outcomes. However, clinical trial data are severely missing due to the rarity of these malignancies, and progress has lagged behind other tumours. MOGCTs are largely equivalent to those originating from male germ cells with regards to many aspects, and majority of data on MOGCT chemotherapy are extrapolated from male germ cell tumours. Available literature mainly consists of retrospective data. Indeed, existing combination chemotherapies in use for MOGCTs are similar to standard regimens for male germ cell tumours (6,11). This review will focus on current chemotherapy options in the treatment of non-paediatric MOCGTs, highlighting also the scenario with regards to precision medicine and ongoing trials. 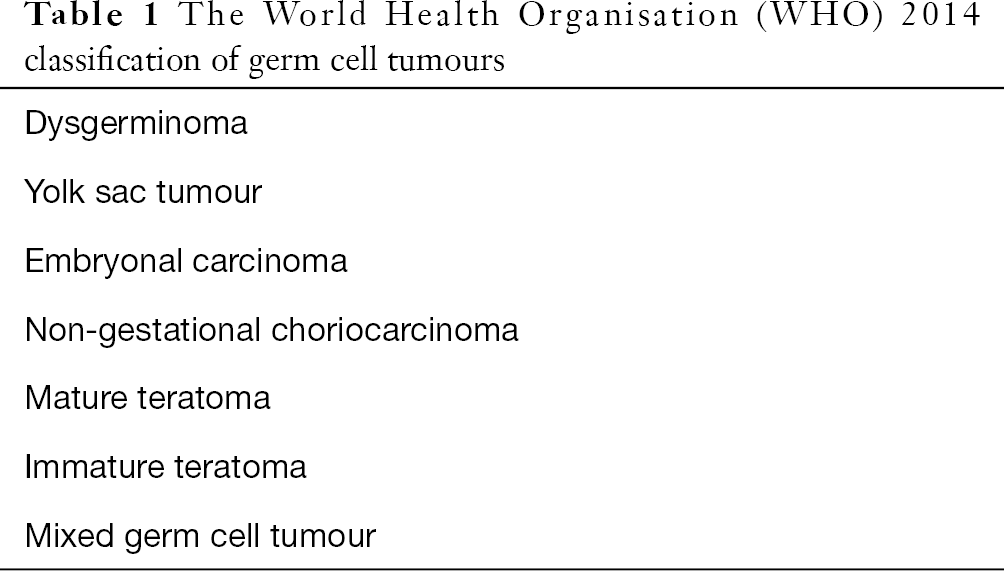 Following surgery, cisplatin-based adjuvant chemotherapy is the standard of care in MOGCTs. However, early-stage dysgerminoma (stage IA and IB) and stage IA grade 1 (G1) immature teratoma are usually spared from adjuvant chemotherapy. The indication of adjuvant chemotherapy remains controversial in stage IA G2–G3 and stage IB–IC, whereas all patients with yolk sac tumour histology are offered adjuvant chemotherapy (7). The International Federation of Gynecology and Obstetrics (FIGO) classification is commonly adopted for MOGCT staging (13). In addition to advanced stage, other prognostic factors include age >45 years, incomplete surgical resection, and yolk sac tumour histology (7,14). Limited prospective trials have evaluated the use of BEP (bleomycin, etoposide and cisplatin) and other platinum-based combinations in the adjuvant setting, showing 5-year survival rates of 85% or higher, according to the stage at diagnosis (6,7,11). The PVB (cisplatin, vinblastine and bleomycin) regimen was widely used in the past, but it has been largely replaced by more tolerable combinations since the introduction of etoposide. BEP is the most popular regimen while EP (etoposide and cisplatin) can be considered in patients ineligible to bleomycin (7,11). Advanced age, poor kidney function, pulmonary comorbidity and smoking history are traditionally regarded as relative contraindications to bleomycin due to increased risk of bleomycin-induced pneumonitis (15,16). Some guidelines recommend obtaining baseline pulmonary function tests (PFTs) before Bleomycin commencement and repeat as clinically indicated thereafter. However, many institutions do not routinely perform baseline PFTs and mainly rely on patient’s selection in order to avoid drug-related pulmonary injury (17). In 1996, Bower et al. (18) published data of 59 subjects treated with POMB/ACE (cisplatinum, vincristine, methotrexate, bleomycin, actinomycin D, cyclophosphamide and etoposide). After a median follow-up of 7.7 years, the 3-year survival was 87.8%. Nevertheless, POMB/ACE did not demonstrate to be superior to BEP in male populations and is regarded as the regimen of choice for extensive metastatic and recurrent MOGCTs in selected institutions only (6,19). Williams et al. (20) enrolled around 40 patients with completely resected stage IB–III dysgerminoma to receive a regimen containing carboplatin plus etoposide for 3 cycles. The regimen was well tolerated, sparing those women from cisplatin-related peripheral neuropathy and hearing loss. After a median follow-up of around 7.8 years, none suffered from MOGCT relapse. Therefore, adjuvant carboplatin can be considered in cisplatin-ineligible women as an alternative regimen. Three cycles of BEP are currently recommended for early-stage radically resected MOGCTs while four cycles are usually adopted in more advanced stages (11). BEP chemotherapy was initially developed as a 5-day regimen requiring a brief inpatient stay in the hospital. A more convenient 3-day schedule was subsequently developed for outpatient administration. Evidence on BEP chemotherapy in MOGCT is mainly extrapolated from testicular cancer, but a large Taiwanese retrospective case series of patients treated with post-operative 3-day BEP chemotherapy reported good safety and efficacy profile in female MOGCTs (21). Advanced MOGCTs often exhibit an aggressive behaviour and require expedited workup and prompt delivery of chemotherapy. The role of preoperative chemotherapy in MOGCTs is not well defined and has not been investigated in randomised trials. It is usually offered to women with advanced stage and significant tumour burden not amenable to upfront fertility-sparing surgery (6,7,11). A weekly EP induction regimen can be adopted in the presence of poor performance status in order to obtain an initial response before proceeding with standard treatment (22). Standard preoperative chemotherapy regimens do not differ from those in the post-operative setting. In large case series published, the number of chemotherapy cycles ranged from one to three, according to treatment response and single institutional practice (11,23,24). Treatment of MOGCTs with brain metastasis at presentation can be challenging, but it usually involves the use of platinum-based chemotherapy. Upfront and/or additional radiotherapy and/or neurosurgery can be offered in particular clinical scenarios, according to individual decisions. Whenever possible, stereotactic radiotherapy is usually preferred over whole brain radiotherapy in order to achieve improved disease control with minimal effect on brain tissue, resulting in better cognitive outcomes. The use of multimodality treatment is more frequently adopted in MOGCTs relapsed with brain metastases, as chemo-resistance can be commonly observed in this setting (7,25). Following radical treatment, women are routinely followed-up with standardized surveillance protocol for either 5 or 10 years, according to the risk of relapse and institutional practice. Clinical examination, chest x-rays, computed tomography, magnetic resonance imaging, and tumour markers are the investigations regularly adopted by surveillance protocols in order to detect potentially curable relapse from MOGCTs (6,7). Additionally, MOGCT on follow-up should be assessed for late effects from chemotherapy such as increased risk of secondary malignancies and cardiovascular complications, sensory peripheral neuropathy, hearing loss, chronic fatigue, impaired fertility, interstitial pulmonary fibrosis, chronic kidney disease, and nontraumatic osteonecrosis (26,27). Relevant psychological and psychosexual sequelae from anti-cancer treatment can also require specialist intervention. Involvement of dedicated teenage and young adult specialist team is strongly recommended, as subjects in the transition between adolescence and adulthood are often unable to cope with the distress provoked by the novelty of illness, side effects from treatments, and hospital admissions (6,27).

Over the past decades, the use of validated surgery and chemotherapy protocols has led to high rates of remission in patients diagnosed with MOGCTs. However, around 15–20% with advanced disease at presentation will experience refractory disease. Whilst the management of recurrent or refractory disease is mainly derived from evidence extrapolated from the male population, women who relapse with MOGCT have poorer outcomes when compared with testicular germ cell tumours (6,7). The majority of recurrences from MOGCTs occur within the first two years of treatment and are mainly detected by rise in serum tumour markers and/or abnormal surveillance imaging. Due to the rarity of the disease and paucity of data, salvage treatment is quite complex and relies on prognostic factors, patient’s preference and single institutional experience (7,28). Patients with late relapses and/or growing teratoma syndrome can be managed with surgery alone. However, potentially radical treatment of early and late relapses very often involves the use of platinum-based chemotherapy. Management of recurrent MOGCTs should be restricted to high-volume institutions with experienced surgeons and, whenever possible, high-dose chemotherapy (HDCT) availability (6,7,11). Retrospective data show that long term survival was achieved in only 10% of recurrent MOGCTs treated with conventional-dose salvage chemotherapy. Yolk sac histology can be frequently seen at recurrence. Most commonly used conventional dose chemotherapy regimens for recurrent MOGCTs include TIP (paclitaxel, ifosfamide, cisplatin), TE/TP (paclitaxel and etoposide/paclitaxel and cisplatin), and Gem-TIP (gemcitabine added to TIP) (6,7). Treatment with palliative intent can also include GemOx (gemcitabine and oxaliplatin), VAC (vincristine/actinomycin D/cyclophosphamide), paclitaxel/gemcitabine, and other chemotherapeutic agents given as single agent or in combination (11,28,29). Retrospective data suggest that HDCT plus peripheral blood stem rescue may be superior to conventional-dose chemotherapy as front-line therapy for recurrent testicular germ cell tumour (30). The role of HDCT in MOGCTs still remains unclear, though some retrospective evidence suggests that HDCT can provide long term remission in around 30%-40% of patients (11,29). The ongoing phase 3 TIGER trial (31) will definitively assess the role of HDCT in relapse male germ cell tumours by comparing with the standard conventional-dose chemotherapy. Extrapolation of results from the TIGER trial will likely impact on MOGCT treatment algorithm.

MOGCTs are rare entities with limited available literature. Multidisciplinary management and centralisation of care are crucial to achieve optimal outcomes. Fertility-sparing surgery and platinum-based regimens are the cornerstone of treatment, leading to high cure rates and acceptable quality of life. Prognosis of recurrent disease is dismal, calling for efforts to perform valuable multicentre clinical trials. Current chemotherapy protocols and algorithm for MOGCT largely rely on evidence extrapolated from testicular germ cell tumours. Studies aimed at better assessing the role of active surveillance and alternative chemotherapy in earlier stages are also warranted. The incorporation of targeted therapy and immunotherapy into the standard of care of MOGCT still requires more efforts.

Conflicts of Interest: All authors have completed the ICMJE uniform disclosure form (available at http://dx.doi.org/10.21037/atm.2020.04.15). The series “Ovarian Cancer: State of the Art and Perspectives of Clinical Research” was commissioned by the editorial office without any funding or sponsorship. SB served as the unpaid Guest Editor of the series. Dr. MM reports other from AstraZeneca, outside the submitted work. The other authors have no conflicts of interest to declare.