White matter hyperintensities (WMHs) or leukoaraiosis, as one of the main magnetic resonance imaging (MRI) expressions of cerebral small vessel disease (CSVD) (1), are detected in 64–86% of stroke patients (2,3). WMHs may have important clinical implications as predictors of poor functional outcome, increased mortality, and long-term recurrence after ischemic stroke (2,4,5). However, the clinical significance of WMHs on stroke outcomes was inconclusive (6).

Data also suggest that stroke patients with WMHs may respond differently to treatment and secondary prevention (7-9). However, the therapeutic effect of stroke preventive therapies in patients with WMHs have yet to be reported from a randomized controlled trial. However, the interaction of WMHs severities with antiplatelet therapies for stroke outcomes has rarely been reported.

Moreover, the distribution of WMH seems to be an even more critical factor. Periventricular white matter hyperintensities (PVWMHs) and subcortical deep white matter hyperintensities (SDWMHs) are supposed to have different pathophysiological significance, thus distribution of WMHs may be a critical factor for clinical consequences after stroke (10-13). Investigations on WMHs will help to stratify risks in stroke patients.

Accordingly, we sought to characterize WMHs in a population of CSVD by examining minor stroke patients within the Clopidogrel in High-risk Patients with Acute Nondisabling Cerebrovascular Events (CHANCE) trial and assess the relationship between WMHs and outcomes of stroke, as well as response to antiplatelet treatments.

The CHANCE trial is listed on clinicaltrials.gov (NCT00979589). The protocol and data collection of the trial were approved by the ethics committee of Beijing Tiantan Hospital and all participating centers. All participants or their representatives provided written informed consent before inclusion into the study.

Participants of the imaging subgroup

Patients who were required to undergo magnetic resonance (MR) examinations (3.0 or 1.5 T) at baseline with the following sequences were included in the imaging subgroup: T1 weighted imaging, T2 weighted imaging, fluid-attenuated inversion recovery (FLAIR), diffusion weighted imaging (DWI), and 3D time-of-flight MR angiography (MRA). Those without any of the aforementioned sequences of MR examinations at baseline were excluded from the imaging subgroup. As reported in our previous article (17), baseline characteristics of patients in the trial with and without the MR sequences were similar.

All images were centrally read by 2 readers (L Zong and C Zhang), who were blinded to patient information. Neuroimage markers of CSVD including WMHs, lacunes, cerebral microbleeds (CMBs), and perivascular spaces (PVSs) were evaluated.

The inter-rater agreement for the rating of WMHs was assessed on a random sample of 100 subjects at 8-week intervals. The intrareader reliability analysis showed a good reliability with κ values of 0.73 and 0.79 for PVWMHs and SDWMHs respectively.

Other neuroimaging markers of CSVD were assessed as following standards (19). Lacunes were defined as focal lesions 3 to 15 mm in size, with the same signal characteristics as cerebrospinal fluid on all MRI sequences, and surrounded by a hyperintense rim on FLAIR images, mainly situated in basal ganglia or white matter. Lacunes were initially assessed on T1WI. CMBs were defined as a round or ovoid area of homogeneous signal loss on SWI, 2 to 10 mm in diameter with blooming effect. Multiple CMBs were defined as ≥5 CMBs. PVSs were defined as small (<3 mm) punctate (if perpendicular to the plane of scan) or linear (if longitudinal to the plane of scan) hyperintensities on T2WI in the basal ganglia or centrum semiovale. Burden of PVSs was then stratified into 4 groups: 0, 1–10, 11–20, >20. Severe PVSs were defined as >10 PVSs in the basal ganglia, or >20 in the centrum semiovale.

We presented categorical variables as percentages and continuous variables as mean with SD or median with interquartile range. The continuous variables between the 3 groups were compared by one-way analysis of variance or Kruskal-Wallis test. Categorical variables were compared by the χ2 test. We assessed the associations between WMHs (including Fazekas scale score ≥2 for the PVWMHs and SWMHs) and outcomes (NIHSS, mRS, and stroke recurrence) using multivariable Logistic regression models. Adjusted factors for NIHSS included age, gender, medical history, smoking, multiple CMBs, lacunes, and severe PVSs. Adjusted factors for mRS and stroke recurrence included age, gender, medical history, baseline NIHSS, smoking, antiplatelet therapy within 90 days, multiple CMBs, lacunes, and severe PVSs. In addition, we assessed whether the treatment effect differed in certain prespecified subgroups by testing the treatment-by-subgroup interaction effect with the use of Cox models. The level of significance was P<0.05 (2-sided). All analyses were performed with SAS 9.4 (SAS Institute Inc., Cary, NC, USA).

Among the 5,170 patients enrolled in the CHANCE trial, 1,089 patients at 45 sites underwent MR examinations at baseline. After excluding TIA patients and those without Fazekas scores and mRS at 3 months, 787 patients undergoing baseline MR examinations with all the required sequences were included in this subgroup analysis (Figure 1). 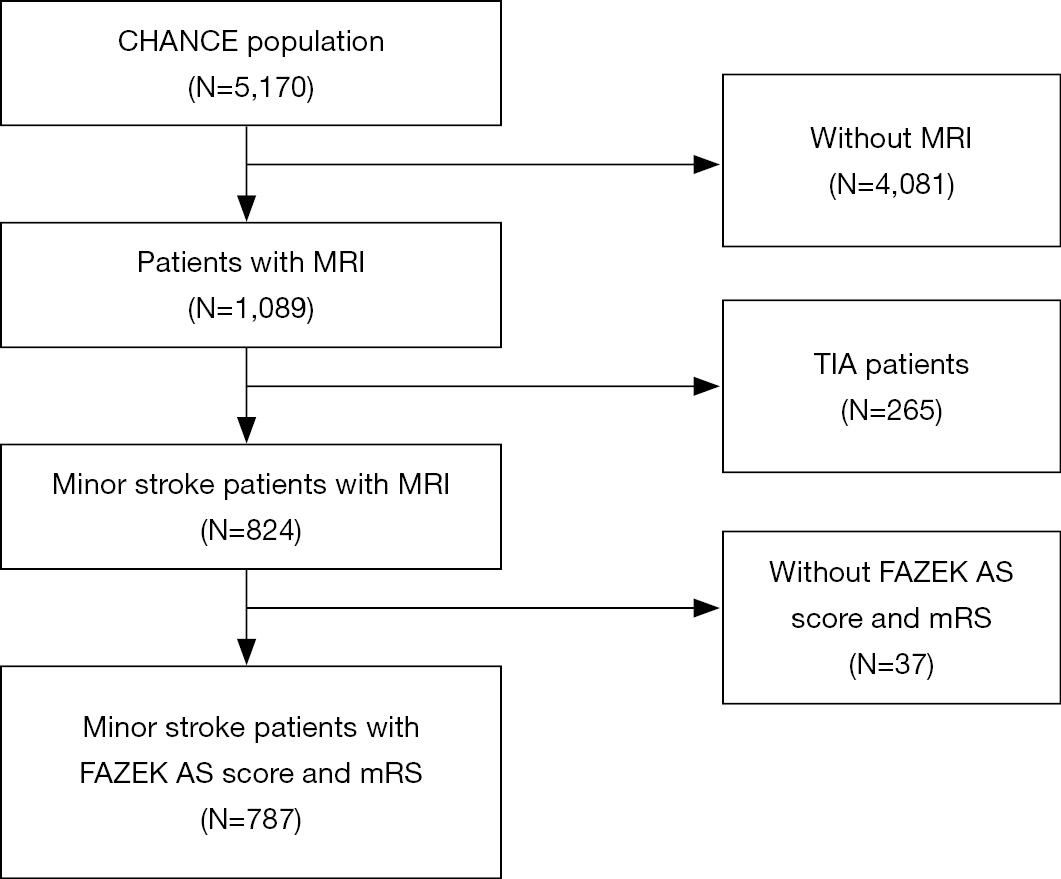 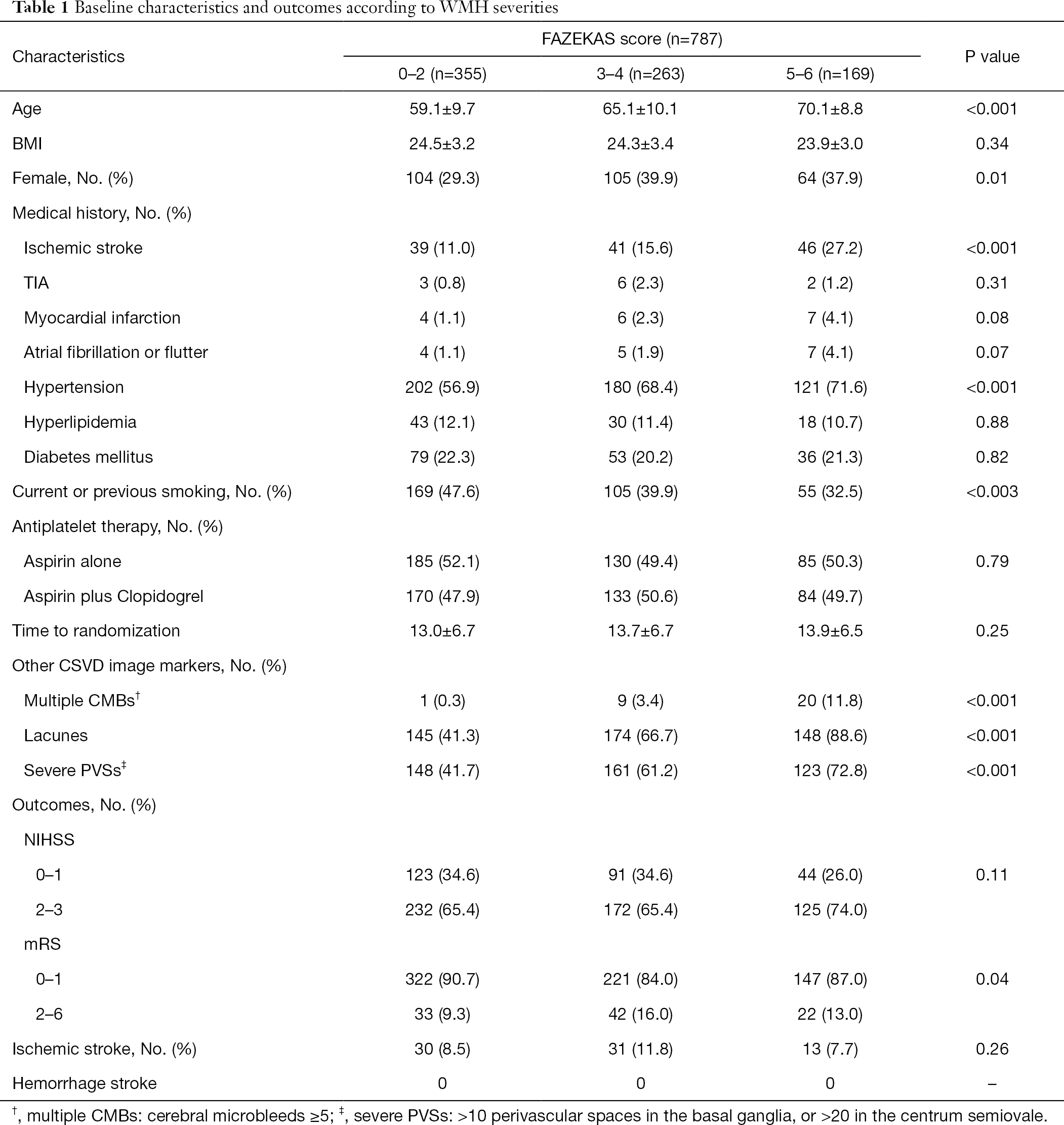 Association of WMHs with stroke outcomes

The risk of stroke recurrence and functional outcome did not differ for dual antiplatelet therapy versus aspirin alone amongst patients with different WMH features. There were no significant interactions in any of the subgroups (P>0.10 for all comparisons) (Table 3). Since none of patients developed hemorrhage stroke, there was no suggestion that the dual antiplatelet therapy increased intracranial hemorrhage in patients with severe WMHs.

Our study reveals that high WMHs burden, especially SDWMHs burden, substantially impacts initial stroke severity in minor stroke; WMHs might not be a predictor of mRS and stroke recurrence in 3 months.

Our results agree with findings from the studies showing that the WMHs were highly predictive for NIHSS on admission (20,21). The probable reason is that loss of white matter tract organization resulted in reduced functional network integrity. It is difficult to compensate for deficits caused by acute ischemic stroke. This hypothesis will require confirmation in additional studies. One intriguing finding is that SDWMHs and PVWMHs both predict severe NIHSS, while SDWMHs might be more relevant. The two subtypes of WMHs have different but converging trajectories, possibly because of overlapping but not identical mechanisms and pathogenesis involved (22). Neuropathological differences are reported that PVWMHs are more likely due to diminished cerebral vasomotor reactivity and subsequent hypoperfusion, while SDWMHs are related to microangiopathy (22). In addition, the functional significance of the two subtypes is possible to be different. In a study involving stroke patients, SDWMHs had a stronger association with cortical perfusion, although SDWMHs counted for only 1/3 of the total WMHs volume, with PVWMHs counting for 2/3 (23,24). That supports our finding, that the two subtypes are differently associated with initial stroke severity in CSVD.

Some studies suggested that patients with WMHs have a higher risk of intracranial hemorrhage and disability after stroke (25,26). Particularly, periventricular WMH volume was associated with accelerated functional decline (27). However, we demonstrated that WMHs has no impact on short-term functional outcome. In addition, several studies indicate that PVWMHs were significantly associated with poor functional outcome at 3 months (12,13,28). However, mRS does not seem to corelate with the location of WMHs in our study. This might be due to the fact that we exclusively included patients with minor stroke who have relatively good functional outcomes. Because of the limited sample size, the result is not conclusive. Further studies are needed to fully understand the association and mechanism.

Whether WMHs are risk factors of intracranial hemorrhage is controversial in prior studies (6,25). We did not observe a statistically significant treatment interaction between WMHs and dual vs. mono antiplatelet therapy. Therefore, the presence of WMHs might not impact on clinical decision making regarding the second preventive treatment.

Our study had several limitations. First, potential selection bias might have existed since this subgroup analysis included only approximately 20% of patients from 45 of 114 participating sites providing MRIs. However, baseline characteristics of patients in the trial with and without the MR sequences were similar (Table S1). Second, the CHANCE trial enrolled only Chinese patients. Hence the external generalizability of the findings of this subgroup analysis needs further validation in Western populations. Third, MRI-based WMHs grading using the Fazekas scale is well established, frequently used in clinical research, and has been shown to correlate well with the WMHs volume. However, the volume of WMHs might be a more precise way to define the severity of CSVD (29). Forth, some patients were scanned with 1.5 T MRI and some other with 3.0 T MRI. This might cause inconsistency in the evaluation of image markers of CSVD. Fifth, in CHANCE study, minor stroke was defined as an acute ischemic stroke with NIHSS ≤3. However, the standardized surrogate information of the stroke severity might include infarct size on DWI at presentation. Sixth, in our study, stroke subtypes were not determined based on the Trial of Org 10172 in Acute Stroke Treatment (TOAST) criteria. There are suggestions that stroke outcomes may be affected by WMHs differentially depending on stroke subtypes (29). 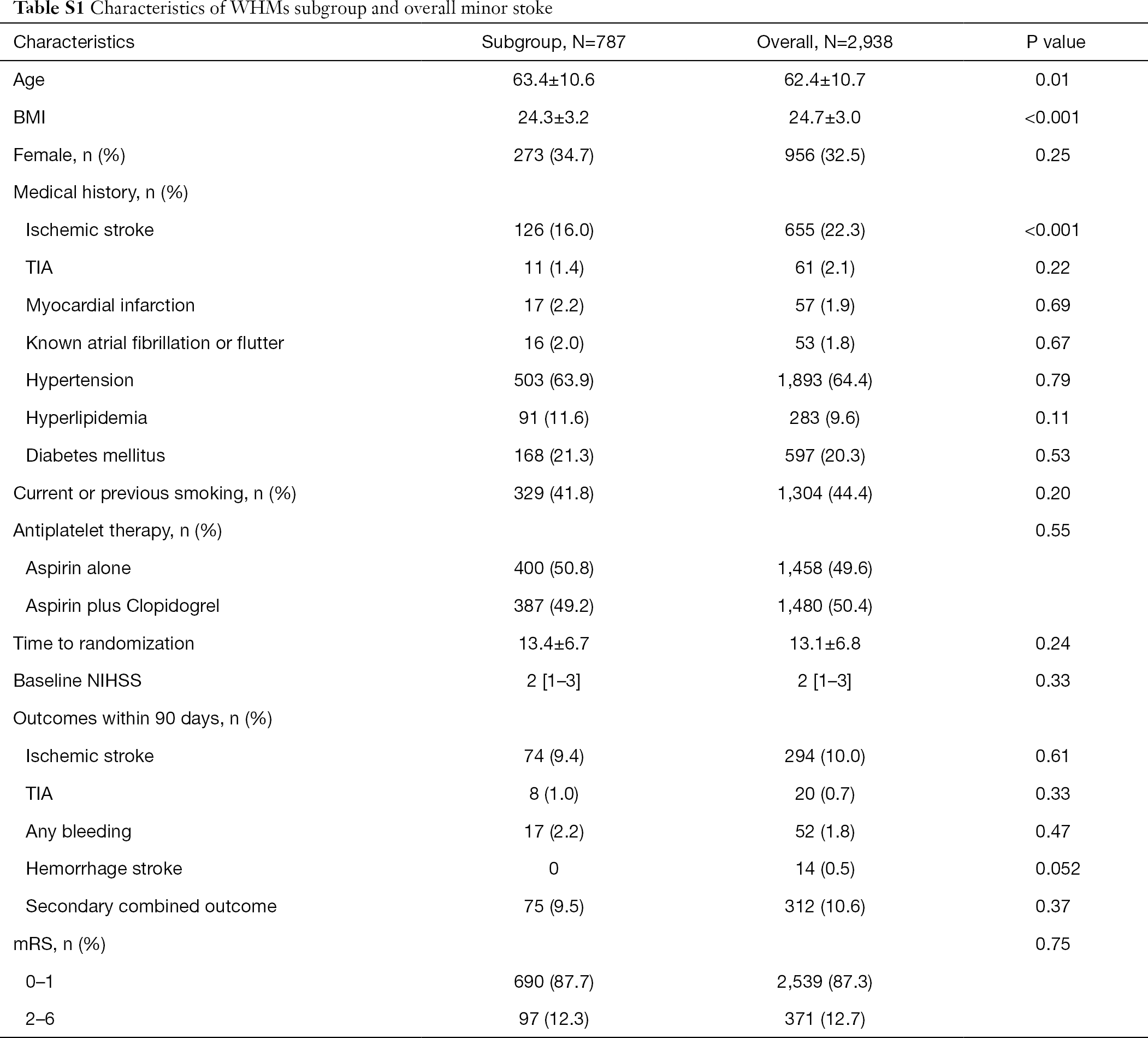 In summary, in patients with minor stroke, both SDWMHs and PVWMHs were predictors for initial stroke severity. WMHs might not be associated with the effect of secondary stroke preventative therapies.

The authors thank all the participants who gave their time to the study.

Ethical Statement: The authors are accountable for all aspects of the work in ensuring that questions related to the accuracy or integrity of any part of the work are appropriately investigated and resolved. The protocol and data collection of the trial were approved by the ethics committee of Beijing Tiantan Hospital and all participating centers. All participants or their representatives provided written informed consent before inclusion into the study.