Metastasis ranks as the first leading cause of cancer mortality worldwide. It is a complex process at the cellular level—only a few cells detached from a primary tumor can inflow into the blood vessels or lymphatic system, then successfully colonize a distant area in the body (8). As a prominent signal for cancer, mitochondrial dysfunction shows a significant correlation with poorer tumor progression and increased metastasis (9,10).

In this review, we address recent insights into the metabolic plasticity of cancer cells and the metabolic coupling between these cells and their tumor micro-environment (TME) in the process of cancer metastasis, as well as a possible mechanism. We also discuss the coupling of mitochondrial proline metabolism and extracellular matrix (ECM) in metastasis. More importantly, we emphasize the crosstalk between mitochondrial proline metabolism and ECM, and how mechano-environment, such as stiffness, might affect cancer progression.

The metastatic cascade is a multi-step process, which includes (I) detachment of local tumor cells (resistance to anoikis), (II) intravasation (with the potential requirement of epithelial-to-mesenchymal transition, EMT), (III) survival in the blood circulation, (IV) extravasation from the circulation, and (V) colonization at the secondary sites (11-13). In all these stages, metastatic cells fine-tune their mitochondrial metabolism to better adapt to the ever-changing environment (13,14).

Mitochondrial metabolism on resistance to anoikis

During the metastasis, tumor cells are detached from the natural matrix niche. The first challenge for cells to metastasis is how to skip anoikis, which is programmed cell death that occurs in cells sensitive to matrix detachment. Unlike these normal cells, tumor cells have attained resistance to anoikis since many tumor cells already limit oxidative phosphorylation (OXPHOS) and reactive oxygen species (ROS) before detachment as a result of the Warburg effect (13) (Figure 1). Thus, tumor cells may inherently endow a survival advantage when detached from the primary tumor. Consistently, antioxidants can reduce oxidative stress and contribute to cancer progression in a lung cancer mouse model (15). 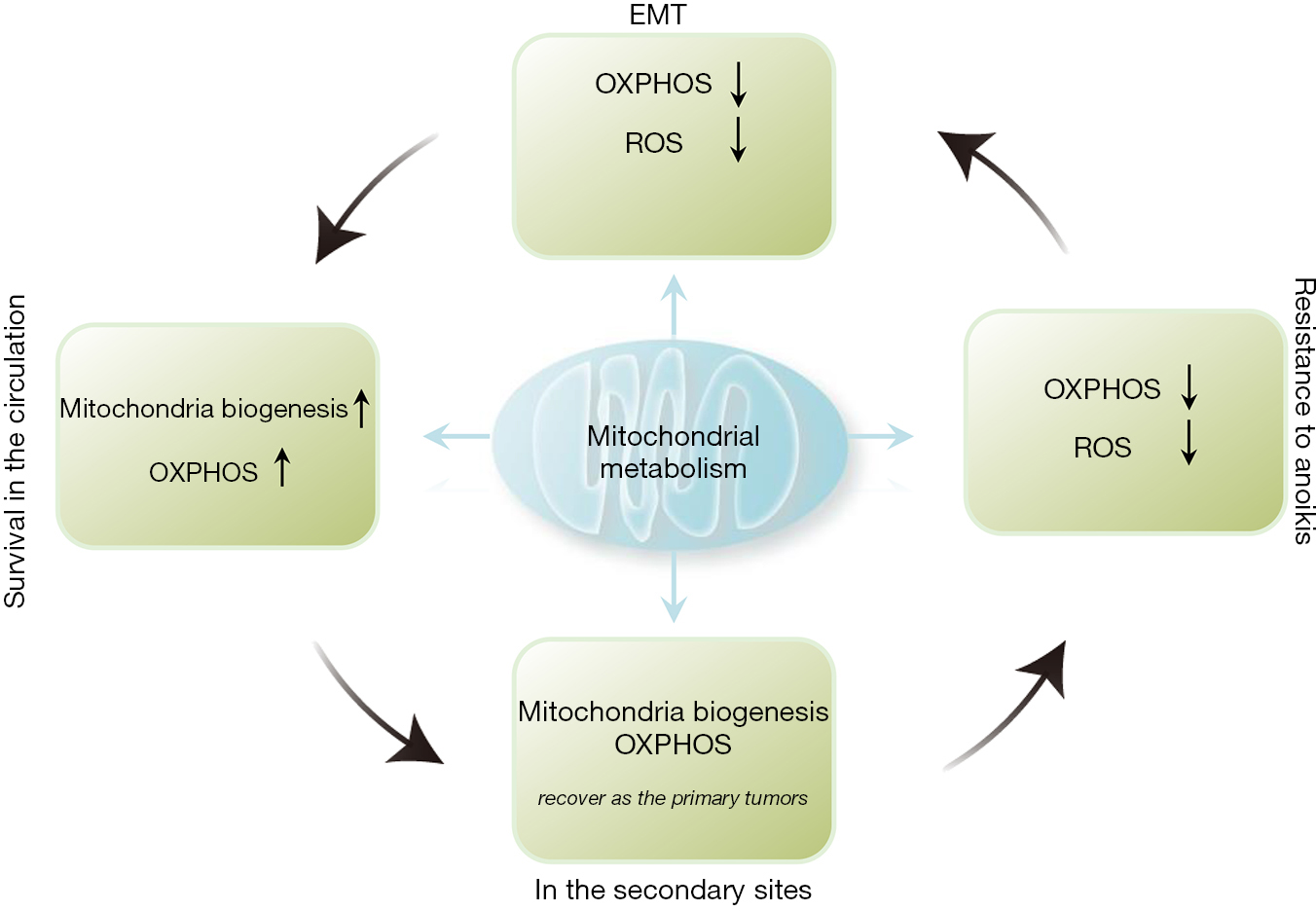 Mechanistically, pyruvate dehydrogenase kinases (PDKs), critical mitochondrial enzymes in glucose metabolism, could block OXPHOS and promote the Warburg effect (16). High expression of PDKs (such as PDK1) in tumor cells can evade excess ROS generated from glucose oxidation, which protects tumor cells from ROS-induced anoikis, thus promotes metastasis. On the contrary, loss of PDK in tumor cells can restore their susceptibility to anoikis owing to increased glucose oxidation and ROS production, leading to decreased metastatic potential (17). Consistently, Clinical analysis of human cancers reveals that PDKs expression in tumors has a strong positive correlation with the formation of distant metastases and a negative correlation with disease-free survival.

Besides, pyruvate kinase M2 (PKM2) is another important mitochondrial enzyme in the metabolic pathway of glucose (15), inhibition of which can shift glucose into pentose phosphate pathway, generating sufficient reducing potential for the detoxification of ROS. Meanwhile, the oxidative branch of the pentose phosphate pathway produces numerous NADPH (18,19), which is a critical cofactor for replenishing reduced glutathione (GSH), the most important antioxidant. Hence, increased antioxidant capacity also helps tumor cells to survive when they detach from the local sites.

Once tumor cells overcome the risk of anoikis, they activate the EMT process to help intravasate the blood or lymphatic vessel, inducing a metabolic rewiring (13). Metabolic reprogramming of tumor cells could be regulated by the EMT process through many molecules, including HIF, Snail, p53, and KISS1 (13). Among them, HIF promotes metastasis and suppresses oxidative metabolism as well as ROS generation. HIF-1 is an important regulator for glycolytic enzymes such as lactate dehydrogenase (LDH), hexokinase, and monocarboxylate transporter (MCT), hence favoring the glycolytic switch (20-22). Furthermore, HIF-1 also inhibits oxidative metabolism by upregulating PDK, an inhibitor of pyruvate dehydrogenase (PDH), which further prevent pyruvate from lowing into the TCA cycle (20,21,23). Another EMT inducer Snail regulates mitochondrial repression and ROS production by suppression of cytochrome C oxidase (COX) subunits or loss of fructose-1,6-bisphosphatase 1 (FBP1) (24). Involved in the first rate-limiting process of glycolysis, phosphofructokinase platelet (PFKP) can also be suppressed by Snail, which would shift the glucose flux more to the pentose phosphate pathway, leading to more NADPH production (24,25).

Meanwhile, p53 and KISS1 have been shown to suppress the Warburg effect and promote oxidative metabolism, resulting in blocking metastasis (26,27). P53 promotes the expression of OXPHOS through by upregulating of synthesis of cytochrome c oxidase (SCO2), which is a member of the COX-2 assembly and involved in oxidative metabolism as well as the electron-transport chain (28). KISS1 makes a metabolism shift from aerobic glycolysis to OXPHOS through stabilization of PGC1α, a key positive transcriptional regulator for metabolic genes in the TCA cycle and oxidative metabolism (29).

Emerging shreds of evidence suggest that the correlation between EMT and metabolism is mutual (14). Metabolic dysfunction can also drive EMT in some circumstances (14). Several mitochondrial metabolites favor the EMT (9,30), in particular, fumarate (31), succinate (32) and 2-hydroxyglutarate (2HG) (33), which are accumulated when mutation or deletion in fumarate hydratase (FH) (31,34-36), succinate dehydrogenase (SDH) (37-41), and isocitrate dehydrogenases (IDHs) (42-44) occur respectively. Mechanistically, Sciacovelli et al. reported that fumarate, succinate, and 2HG are responsible for the activation of EMT by suppressing the Ten-Eleven Translocation (TET)-dependent demethylation of miR200 (31), which is a known inhibitor of both SNAIL2 (45) and ZEB1 (31,46), thus showing anti-metastatic effect in breast cancer (33) and colorectal cancer (33,47). In addition, succinate accumulation promotes cell migration and invasion by activating the TGF-β/SNAIL1 pathway in colorectal cancer (48) and ovarian cancer (49); while in lung cancer and a human lung xenograft-mouse model, loss of SDH5 (50) induces EMT through activating the axis of glycogen-synthase kinase (GSK-3β)-β-catenin (51).

Mitochondrial metabolism on cell survival in the circulation

In order to survive in the blood or lymphatic vessel, mitochondrial circuitry of cancer cells changes for adapting to the changing environment. Gene expression profiling coupled with bioinformatic analyses by LeBleu et al. reveal that circulating cancer cells (CCC) from breast cancer primarily rely on OXPHOS and increased ATP production, compared to cancer cells from the primary tumors (PCC) (Figure 1). Further research reveals that transcription co-activator PGC-1α was a key factor in enhancing OXPHOS, oxygen consumption rate, and mitochondrial biogenesis. Overexpression of PGC-1α promotes mitochondrial OXPHOS and enhances the invasion of breast cancer cells. By contrast, suppression of PGC-1α in these cells inhibits their invasive potential and attenuates metastasis. Consistently, the expression of PGC-1α in human cancer tissue is positively correlated with tumor progression and metastasis (52).

Mitochondrial metabolism on colonization at the secondary sites

When the CCC arrive at and proliferate at the secondary sites, their mitochondrial metabolisms recover as the primary tumors. There are similar gene expression levels on OXPHOS and mitochondrial biogenesis between metastatic cancer cells (MCC) and CCC, suggesting that expression of these genes are recovered as CCC colonize at their metastasis sites (52). However, in some MCC, their gene expression levels are merely partially recovered compared with that in primary cancer cells, potentially as a result of a collective mixture of MCC at different metastatic stages (i.e., arrest, extravasation, migration and proliferation stages) (52) (Figure 1).

TME is crucial for tumor progression and metastasis (53), which is composed of non-transformed stromal cells including fibroblasts, mesenchymal stem cells (MSC), endothelial cells, various inflammatory cells as well as the ECM. Cancer-associated fibroblasts (CAFs) serve as a prominent component of TME, which favors tumor metastasis. Several studies reveal that CAFs and cancer cells are metabolically coupled in many types of human tumors such as breast, prostate (54), and head & neck cancers as well as lymphomas. On one hand, cancer cells foster oxidative stress in surrounding CAFs, forcing CAFs to undergo autophagy/mitophagy as well as aerobic glycolysis. On the other hand, anabolic cancer cells that undergo oxidative mitochondrial metabolisms are supported by recycled nutrients from CAFs, such as lactate, ketones, and glutamine (55,56). Moreover, in breast cancer patients, these lactate- or ketone-induced gene signatures are associated with poor clinical outcomes (including metastasis, recurrence and poor overall survival) (57). Last but not least, the administration of lactate dramatically enhances the lung metastasis rate (>10-fold) in a xenograft model of breast cancer (MDA-MB-231 cells) (58).

Mechanistically, HIF1-alpha and NF-κB signaling are the master pathways that drive oxidative stress, then induce autophagy and senescence in CAFs (59-63). Moreover, caveolin-1 (Cav-1) and monocarboxylate transporter 4 (MCT4) are new biomarkers of this CAF phenotype. Loss of Cav-1 can induce high MCT4 expression in the stroma, which has been found to promote cancer cell migration and metastasis (64,65). A recent study reveals that exosomes play important roles in the metabolic coupling between CAFs and cancer cells. Exosomes, secreted by patient-derived CAFs, can strikingly induce metabolic reprogramming after their uptake by cancer cells, which inhibits mitochondrial OXPHOS, subsequently increases glycolysis and glutamine-dependent reductive carboxylation in prostate and pancreatic cancers (53).

Coupling of mitochondrial proline metabolism and ECM in metastasis

ECM is an intricate structural support network, which plays a positive role in the metastasis of cancer cells (66). Collagen is one of the most important components in the tumor ECM, especially in solid tumors. More importantly, collagen provides mechanical strength (67). Proline, a critical component of collagen, restricts the rotation of the polypeptide collagen chain by cyclic structure, hence strengthens the helical characteristic of the molecule (62,63). About 99.8% of hydroxyproline in the human body is stored in collagen and is an indicator of the total volume of collagen.

A new study reveals that mitochondrial proline metabolism and ECM are strongly correlated (68). Proline synthesis is strikingly influenced by the mechano-environment. For example, proline synthesis is decreased when cells are plated on soft ECM, while stiffening ECM significantly increases proline synthesis. In turn, alteration of proline metabolism may affect the collagen synthesis as well as ECM remodeling in lung cancer, since ~23% of the amino acid of the collagen molecule is comprised of proline and hydroxyproline (69-71), which are crucial for the biosynthesis, structure, and strength of collagen. Mechanistically, as an integrin-associated protein, kindlin-2 is well-known to localize at focal adhesions (72-79) sites where ECM proteins are linked to actin stress fibers (80). Interestingly, it is newly found to be translocated into mitochondria and interacts with pyrroline-5-carboxylate reductase 1 (PYCR1), which is a critical enzyme for proline metabolism in organisms. Furthermore, the stiffening of ECM promotes the translocation of Kindlin-2 as well as its interaction with PYCR1 in mitochondria, increasing the PYCR1 protein level, thus promoting proline synthesis and cell proliferation (Figure 2).

Conflicts of Interest: All authors have completed the ICMJE uniform disclosure form (available at http://dx.doi.org/10.21037/atm.2020.03.42). The series “Cancer Metastasis: Molecular signaling and therapeutic options” was commissioned by the editorial office without any funding or sponsorship. The authors have no other conflicts of interest to declare.