Hepatic surgical resection (SR) is considered as curative treatment in hepatocellular carcinoma (HCC) in the patients with preserved liver function (1). However, HCC recurrence is more than 50% within 5 years after surgery, which is the biggest problem after SR (2,3). Liver transplantation (LT) is the most effective treatment for HCC based on the Milan criteria (MC) (4). In Eastern Asia, SR is a priority for HCC patients with sufficient liver function due to limitation of deceased donation, whereas LT is performed as the initial treatment in Western countries.

Intrahepatic recurrence after SR is very common. Various treatments, such as LT, SR, radiofrequency ablation (RFA), transarterial chemoembolization (TACE), percutaneous ethanol injection (PEI), and combination of TACE and RFA (TACE-RFA), are being applied to these patients, and the response to treatment influences long-term outcomes (5).

The aim of this study was to compare the effects of various treatments on patients with intrahepatic HCC recurrence with MC after SR in solitary HCC patients.

This study included patients who underwent SR for treatment-naïve single HCC, which was diagnosed by preoperative radiologic images, in Seoul National University Hospital (SNUH) (n=938) and Samsung Medical Center (SMC) (n=1,382) from January 2005 to December 2011. HCC was diagnosed on the basis of several guidelines (9,10) and histologically confirmed after SR. We included patients with intrahepatic HCC recurrence within the MC after SR in two centers (n=515) (Figure 1), and present study was approved by Institutional Review Board of two centers. 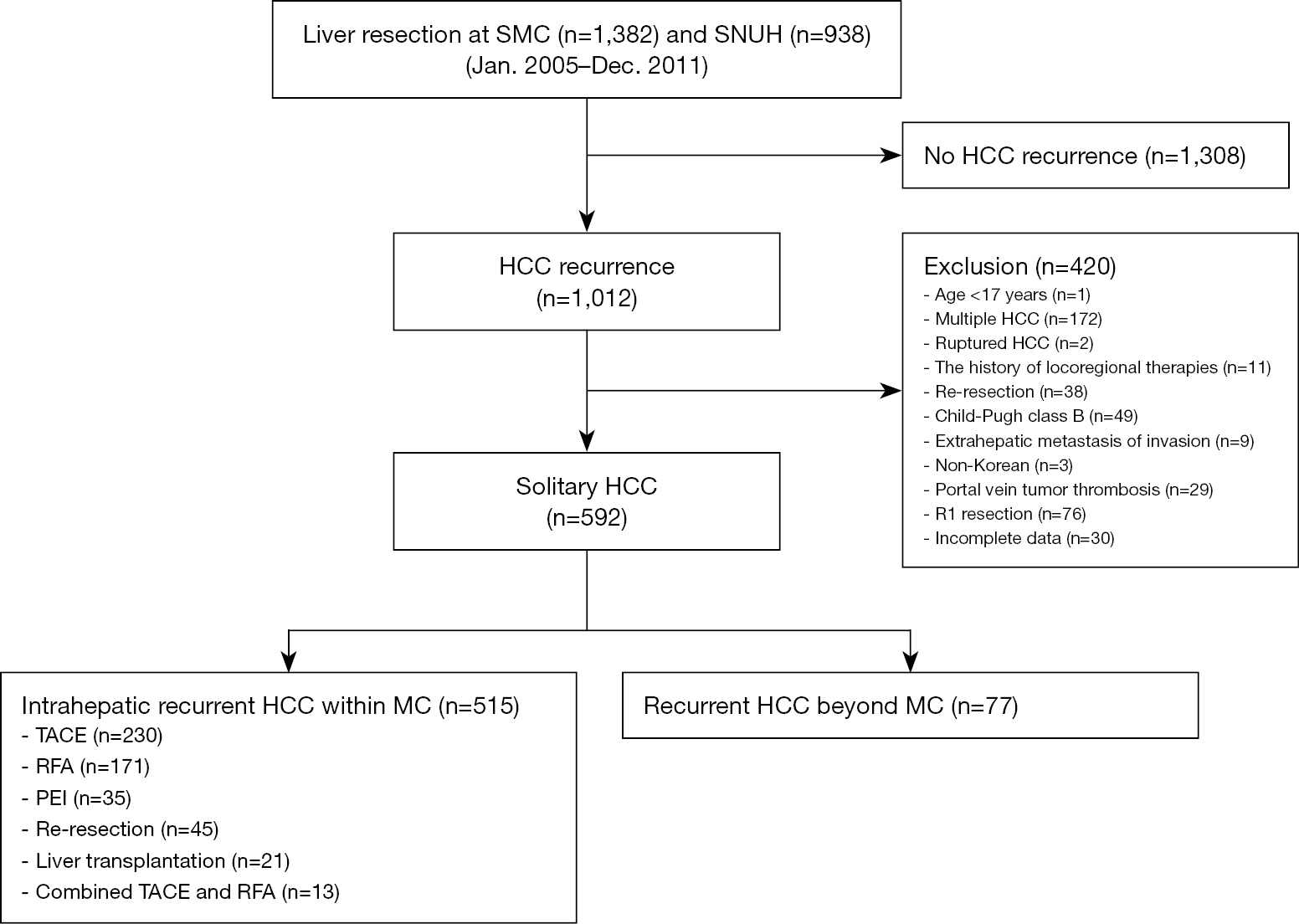 When a recurrence was detected during follow-up after primary curative SR in solitary HCC patients, patients were hospitalized and treated within 1 month after diagnosis. RR was performed in oligonodular HCC patients with Child-Pugh class A. RFA or PEI was considered in solitary HCC less than 3 cm when RR was difficult and dangerous. TACE was considered if serum total bilirubin level was less than 2 mg/dL without satisfying the previous criteria. Salvage LDLT was considered to have potential living donor and be difficult to use RR, PEI, RFA, and TACE due to decompensated liver function. TACE-RFA was performed in SMC in the case of small solitary HCC less than 3 cm where RFA was difficult because of tumor location. Target therapy and systemic chemotherapy were not considered as treatment in intrahepatic recurrent HCC patients.

Categorical variables are expressed in number and percentage and continuous variables are described as median and range. Comparisons between the treatment groups (LDLT, RR, RFA, PEI, TACE, and TACE-RFA) were performed by the Chi-square test or Fisher’s exact test. A one-way analysis of variance (ANOVA) was used for continuous variables. Disease-free survival (DFS) and patient survival (PS) were considered from the date of treatment for recurrent HCC to a 2nd HCC recurrence and the last follow-up or death, respectively. Survival rates were analyzed using the Kaplan-Meier method with log-rank test. All tests were two-sided, and statistical significance was defined as P<0.05. All statistical analyses were performed using SPSS ver. 22.0 (SPSS, Inc., Chicago, IL, USA). 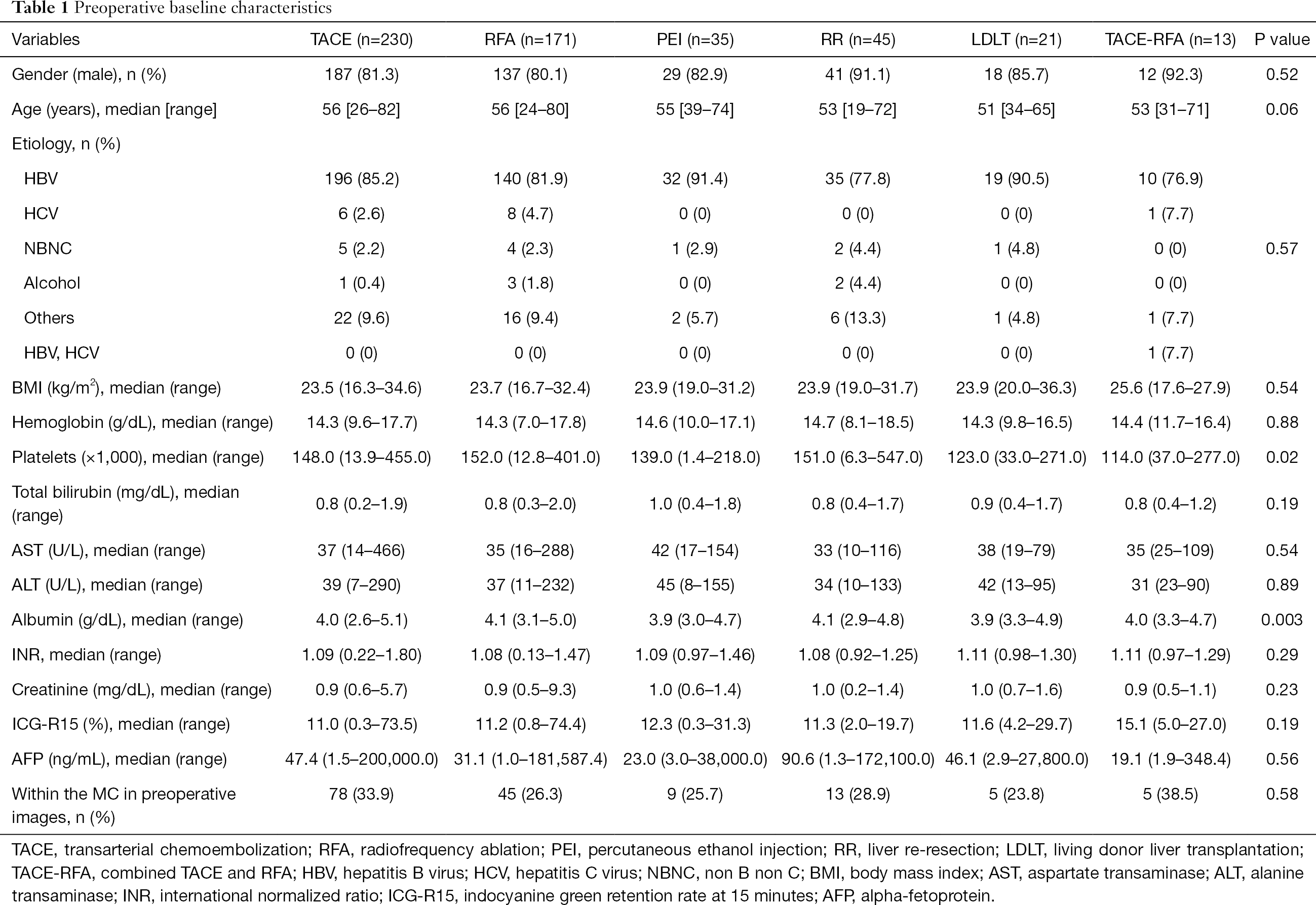 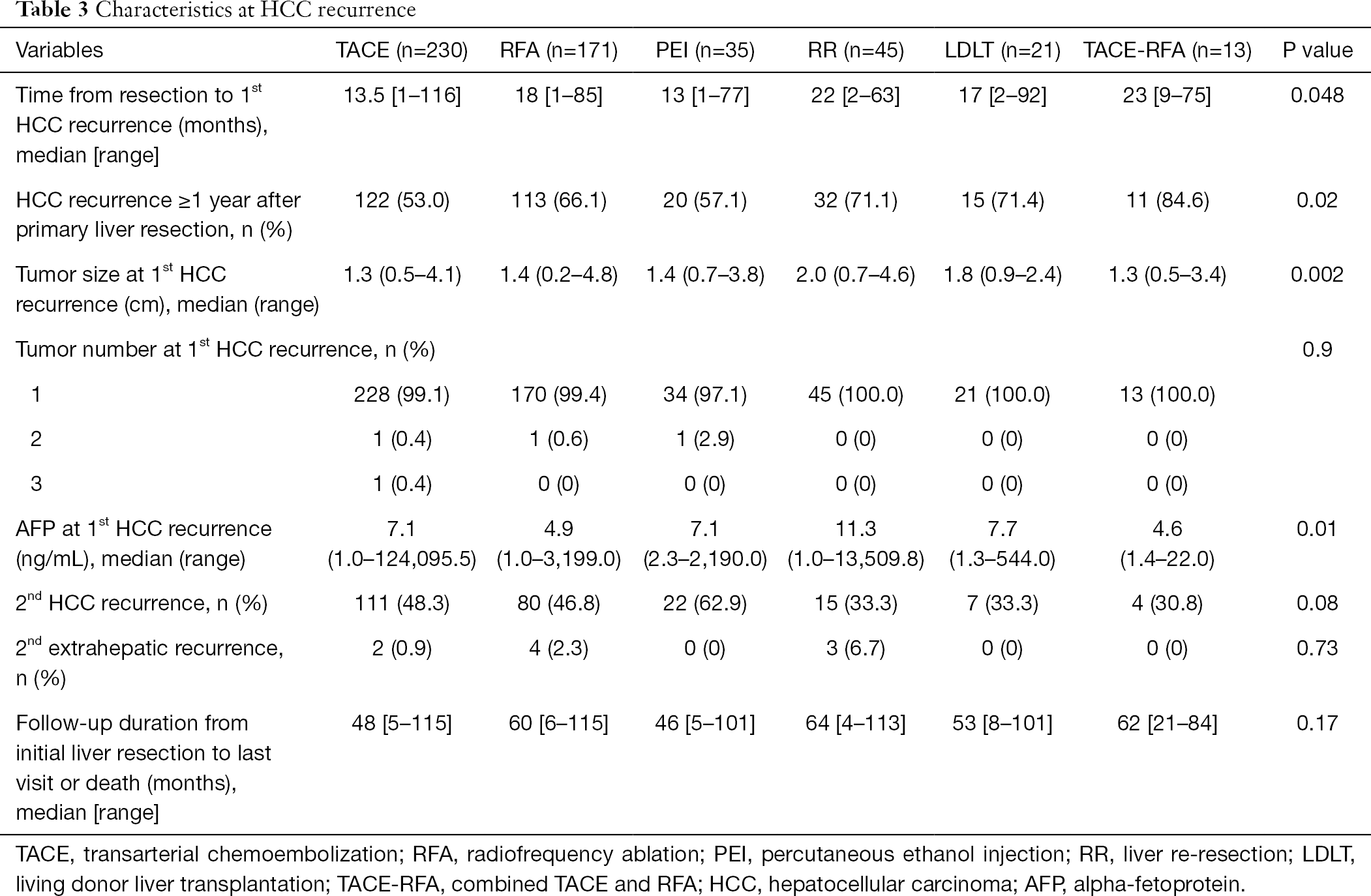 The long-term prognosis in recurrent HCC patients after curative LR is unsatisfactory because tumor recurrence is related with patient death. The reported independent prognostic factors for post-recurrence survival are primary tumor status such as satellite nodules or PVTT, and advanced liver cirrhosis in background liver. The time to recurrence and the tumor size, number, and location of recurrence affect PS (2,3). In addition, early diagnosis and treatment of recurrence after liver cancer surgery have a great influence on the prognosis of patients with hepatectomy. The choice of treatment depends on the location of the tumor, performance of patient, and liver reserve function. However, consensus treatment strategies for recurrent intrahepatic HCC have not been established. According to the treatment algorithm in multiple guidelines, reallocating patients with recurrent HCC to treatment as if they were treatment-naïve patients might be inappropriate (10).

All the recurrent HCC patients after curative SR in the present study were Child-Pugh class A and within the MC because we wanted to evaluate the outcomes from different first-line treatments for intrahepatic recurrent HCC with preserved liver function. In this study, a 2nd HCC recurrence in recurrent HCC within the MC did not differ by treatment modality except for the PEI group. PS in the LDLT and TACE-RFA groups was higher than in the other groups. We thought it would show a good prognosis after LDLT as aggressive treatment for recurrent HCC. However, LDLT is not overwhelmingly superior to other therapies in our study.

Previous several studies have reported that aggressive treatments, such as RR and SLT, have survival benefits over non-surgical treatments (11-14). The single recurrent HCC at the peripheral site shows a good prognosis after RR or RFA (15,16). Previous propensity score matching study showed that long-term survival in the RFA group was higher than in the RR group (11). In our population, 3-year DFS rate and PS rate from the time of recurrence were 58.1% and 60.2% in the RR group and 48.3% and 51.7% in the RFA group, respectively. Thus, our study showed similar outcomes between the two groups.

The feasibility of RR or RFA can be limited by multinodular recurrent tumors, difficult tumor locations, a small expected remnant liver volume, poor performance status, medical comorbidities, limited liver functional reserve, and other causes. TACE is an alternative option for those patients. In this study, we found comparable DFS rates and PS rates in the TACE and RFA groups.

Predicting HCC recurrence after SR is associated with tumor aggressiveness. Pathologic reports reflect tumor aggressiveness. The proportion of tumor grade of 3 or 4 in the PEI and LDLT groups was higher than in the TACE, RFA, RR, and TACE-RFA groups. Additionally, the incidence of intrahepatic metastasis in the TACE group was higher than in the other groups. The optimal treatment strategy should ideally be guided by a rigorous risk-versus-benefit assessment, but even such an analysis does not always provide a clear answer.

This study has several limitations. First, our study is retrospective. in our study. Second, the type of treatment was not randomly decided, and treatment selection bias did not completely eliminate in present study. Third, PET/CT or serum inflammatory indices were not evaluated in our study. Fourth, our population contained a higher proportion of patients with hepatitis B virus than reported in Western countries.

Ethical Statement: The authors are accountable for all aspects of the work in ensuring that questions related to the accuracy or integrity of any part of the work are appropriately investigated and resolved. This study was approved by the Samsung Medical Center Institutional Review Board (SMC 2013-05-013) and Seoul National University Hospital Institutional Review Board (H-1303-061-474). Written informed consent was exempted from each IRB.