How does microRNA modulate Wnt/β-catenin signaling in thyroid oncogenesis?

MicroRNAs (miRNAs) are class of endogenous small non-coding RNAs commonly deregulated in cancer, which became hallmarks for diagnosis and prognosis of cancer (1). One of the main function of miRNAs is to inhibit the translation of target mRNA by binding to 3'-UTR region, reducing protein levels. One single miRNA may control several hundreds of targets at once, and thus, this mechanism of action results in a broad and complex effect in different signaling pathways involved in the oncogenesis and tumor progression (2). In the current issue, Yu et al. (3) describe a novel association of high expressed miRNA miR-3619-3p in PTC with tumor progression through Wnt signaling. High levels of miR-3619-3p in PTC positively correlated with characteristics of invasive potential such as extrathyroidal invasion, multicentricity and lymphnode metastasis.

The miR-3619-3p is poorly conserved among mammal species and the target prediction by TargetScan algorithm (4) extended to more than 2,000 potential mRNA controlled by miR-3619-3p. β-catenin (CTNNB1), a component of the canonical Wnt signaling pathway, is among the top 10 predicted targets. Interestingly, overexpression of miR-3619-3p in human thyroid cancer cell line did not reduce β-catenin protein levels as expected but enhanced CTNNB1 mRNA half-life and protein levels demonstrated by the Yu et al. (3). Moreover, knock-down of miR-3619-3p reduced β-catenin in PTC cell lines. Either, miR-3619-3p is acting through an unconventional and less frequent mechanism or there is an indirect effect on other proteins that led to β-catenin mRNA stabilization.

The canonical Wnt signaling depends on the control of β-catenin levels. In the absence of signal, free β-catenin (not bound to E-cadherin) is constantly targeted to degradation by the destruction complex composed of scaffold proteins APC and Axin, and CKI and GSK3β which phosphorylate β-catenin. This leads to recruitment of β-TrCP, a ubiquitin E3 ligase that ubiquitinates β-catenin addressing it for proteasomal degradation (Figure 1). Wnt signaling cascade is activated upon binding of Wnt to Frizzled (FZD) and LRP5/6 co-receptors that recruits Dishevelled (DSV) and APC protein, disrupting β-catenin degradation complex and leading to β-catenin accumulation in the cytoplasm. Then, β-catenin translocates to the nucleus and forms a complex with TCF/LEF to promote the expression of target genes such as cyclinD1 (CCND1) and MYC. Dickkopf-1 (Dkk1) is an negative regulator of Wnt signaling as it binds to LRP5/6 receptors and block the formation of LRP5/6-Wnt-FZD complex (Figure 1). 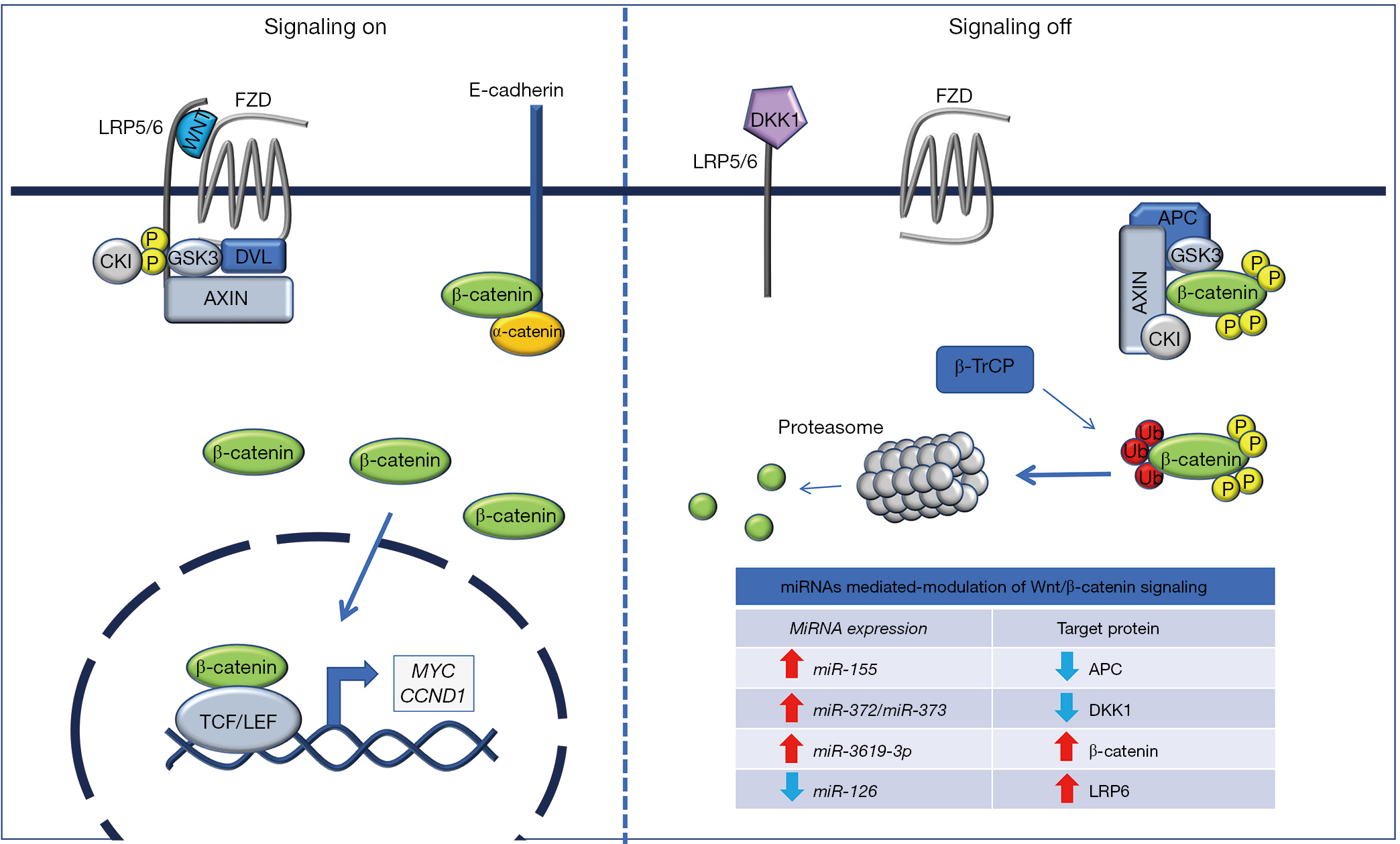 Figure 1 Canonical Wnt/β-catenin signaling depends on the control of β-catenin degradation and translocation to the nucleus to activate target genes transcription. Deregulation of microRNAs that control key signaling components of Wnt/β-catenin pathway is observed in thyroid cancer. NT, normal thyroid.

Several studies have shown that miRNA-mediated regulation of Wnt signaling is altered in thyroid cancer. In PTC, high levels of miR-155 target APC, a component of destruction complex (10). Overexpression of miR-155 leads to cell proliferation and activation of β-catenin signaling targets in vitro and tumor growth in vivo using a xenograft model. On the other hand, low levels of miR-126 are detected in PTC in association with poor prognosis such as LN metastasis, tumor size and stage, leading to overexpression of its target LRP6, a coreceptor for Wnt signaling (11). Additionally, β-catenin signaling can induce miRNA deregulation. Activation of β-catenin signaling induces the transcription of miR-371/miR-373/miR-373 cluster (12). These miRNAs miR-372 and miR-373 down-regulate DKK1 by the binding to mRNA 3'-UTR, and consequently enhancing β-catenin signaling in a feedback loop. High levels of miR-372 are detected in PTC and correlates with tall-cell variant that frequently is more aggressive and shows relapse (13).

Recently, high-throughput screening has shown that additional genetic alterations are important to thyroid cancer progression (14,15). In anaplastic thyroid cancer, the most lethal form of thyroid cancer, mutations in β-catenin, Axin1 and APC are frequent and seems to be mutually exclusive (16,17), leading to nuclear accumulation of β-catenin, a common observation by immunohistochemistry (IHC). Moreover, there is a cross-talk with the tumor-suppressive pathway of p53 (18). Active p53 down-regulates β-catenin levels by enhancing degradation process via GSK3β and proteasome. However, in mutant inactive p53 cells β-catenin degradation is blocked, or when β-catenin gene is mutated cells becomes resistant to p53-induced degradation of β-catenin (18). This cross-talk indicates that the presence of TP53 gene mutations which is a hallmark of ATC, being detected in up to 73% of the patients using high-throughput sequencing (14), could help to enhance β-catenin accumulation in aggressive thyroid cancer. These observations point an important role of β-catenin and Wnt signaling to thyroid cancer progression.

Indeed, aberrant β-catenin expression in PTC is positively correlated with loco-regional recurrence and distant metastasis (19). Moreover, high expression of WNT10A in PTC has been reported to increase β-catenin signaling activation (20). Data extracted from 50 pair-matched PTC samples from TCGA database shows increased expression of WNT10A, CTNNB1 and CCND1, while AXIN2 is downregulated (Figure 2), indicating that Wnt signaling is activated in PTC. 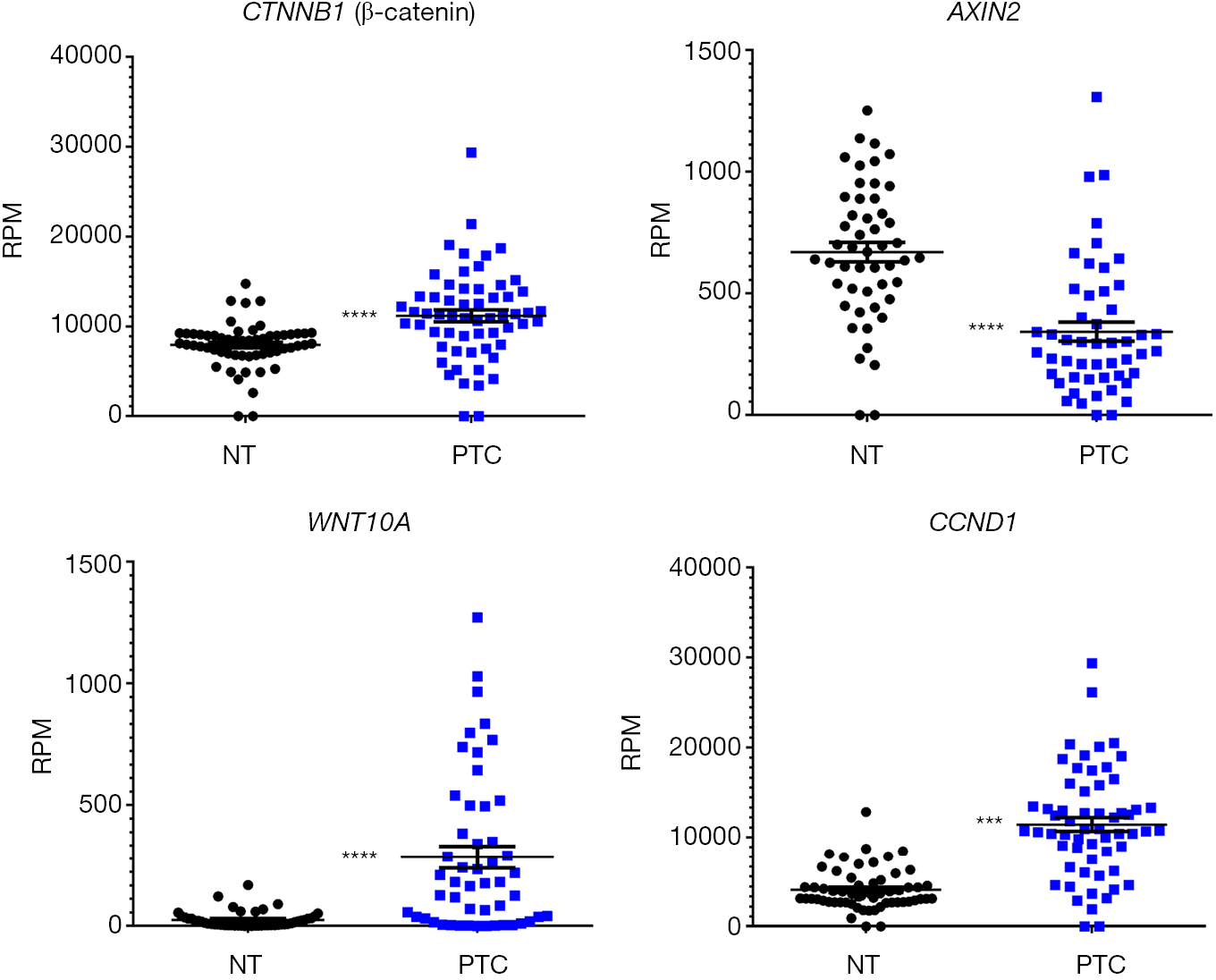 Modulation of Wnt/β-catenin signaling pathway would be a potential adjuvant approach to treat aggressive thyroid cancer. Indeed, knock-down of the overexpressed β-catenin using shRNA blocks cell proliferation and induces senescence in RAS-mutated ATC cell lines (21). On the other hand, modulating Wnt signaling antagonist DKK1 has shown promising effects in vitro (22). DKK1 is down-regulated in PTC, and its restoration reduced thyroid cancer cell viability and migration while induced apoptosis. Moreover, several drugs that target Wnt signaling pathway are under clinical-trials, however none have been approved for clinical use to date (6,23).

Thus, identification of novel miRNA deregulated in aggressive PTC that modulate Wnt signaling uncovered an additional layer of post-transcriptional regulation by miRNA; and miRNAs emerge as a new potentially targetable molecules for an adjuvant therapy in the future.

Funding: The authors would like to thank FAPESP and CNPq for financial support.