Primary prevention of myocardial infarction: aspirin is not as useful as it seems

The primary preventive effect of aspirin on cardiovascular events has been a controversial issue in past decades. Early studies conducted before 2000 (1,2) consistently considered aspirin to confer a greater benefit than risk in primary prevention. As a result, aspirin was recommended for people with increased cardiovascular risk to balance the benefit-risk ratio. However, studies since 2000 (3,4) have shown little or no benefit from aspirin. In particular, three large studies [Aspirin to Reduce Risk of Initial Vascular Events (ARRIVE) (5), Aspirin in Reducing Events in the Elderly (ASPREE) (6), and A Study of Cardiovascular Events in Diabetes (ASCEND) (7)] published in 2018 suggested that aspirin might increase bleeding risks and was far from providing significant benefits in primary prevention.

Studies on aspirin for the primary prevention of all myocardial infarctions were searched in PubMed, Embase, Web of Science, Cochrane Library and Google Scholar. Included studies had to be randomized double-blind controlled trials and provide sufficient primary data (including patient number and events of myocardial infarction in the aspirin group and control group). The language was limited to English, and the search was finished on July 27, 2019.

Reference lists of all included studies were also carefully read for potential studies. Dr. Yi Luan and Dr. Ya Li independently evaluated articles. If there was any disagreement on inclusion, it was resolved by discussion with another author, Dr. Wenbin Zhang.

The quality of all original studies was evaluated in accordance with the Cochrane Collaboration risk of bias tool, including selection bias, performance bias, detection bias, attrition bias and reporting bias. The absence of the above five biases was considered indicative of high quality.

The effects of aspirin on the primary prevention of myocardial infarction were estimated by calculating the pooled risk ratio (RR) and its 95% confidence interval (CI). The Z-test was used to determine the significance of pooled RR. P<0.05 was considered statistically significant.

After initial screening, fifteen full-text articles were assessed for eligibility. However, the British Male Doctors (BMD) (10), Primary Prevention Project (PPP) (11), Japanese Primary Prevention Project (JPPP) (12), Japanese Primary Prevention of Atherosclerosis With Aspirin for Diabetes (JPAD) (13) and Aspirin for Primary Prevention of Cardiovascular Disease and Renal Disease Progression in Chronic Kidney Disease Patients (AASER) (14) studies had high performance bias because they were not blind. The 650 mg/day aspirin dosage in the Early Treatment Diabetic Retinopathy Study (ETDRS) (15) was much higher than the current dosage used for prevention. We ultimately included 9 original studies (1-7,16,17) with 135,043 participants (aspirin group n=67,486, vs. control group n=67,557). The characteristics of the included trials are shown in Table 1.

Figure 1 Primary prevention of all myocardial infarctions with aspirin vs. control. (A) Forest plot: individual and pooled RRs with 95% CIs and the weight of the corresponding study in the meta-analysis. (B) SND scatter plot: SND on the vertical axis is equal to the logarithm of RR over its standard error, and the precision on the horizontal axis is the reciprocal of the standard error. The extension line of the regression line passes through the origin (P=0.881), indicating no publication bias. RR, risk ratio; CI, confidence interval; SND, standard normal deviate. 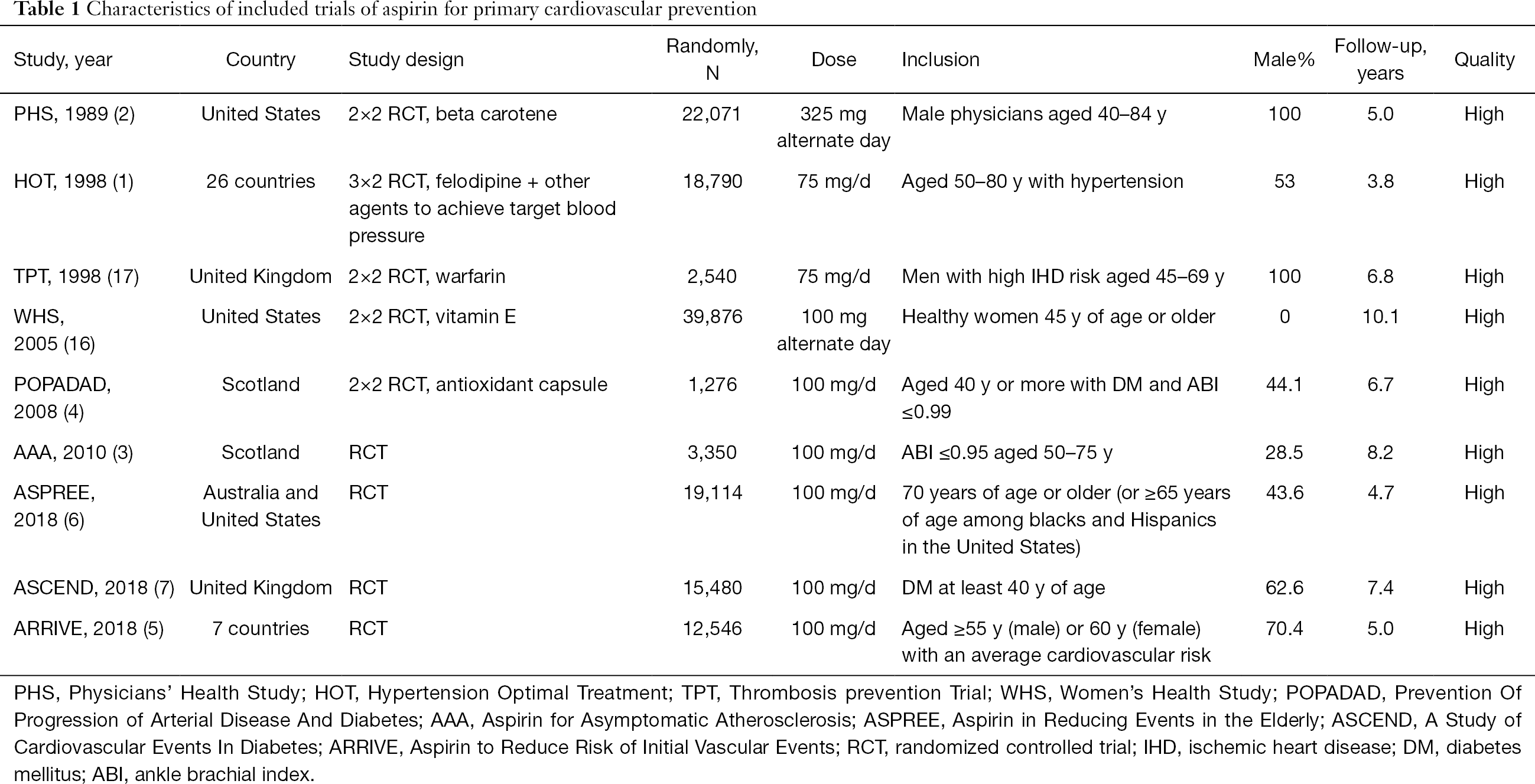 At the same time, patients with SMI belong to a high-risk subgroup. They are often unaware of their illness and do not limit their activities. With SMI, the incidence of heart failure was significantly increased (20,22), and the effects of high-risk factors, such as smoking, reduced physical activity, high body mass index, poor dietary habits, hypertension, hyperlipidaemia and hyperglycaemia, on cardiovascular disease were almost doubled (23). If clinically manifested acute myocardial infarction patients were found to have prior SMI by late gadolinium enhancement cardiac magnetic resonance (LGE-CMR) images, they would have a more than 3-fold risk of mortality and major adverse cardiovascular events (21). Furthermore, 42.4% of the individuals who experienced sudden cardiac death without a clinical history of coronary artery disease were detected to have a previous SMI at autopsy (24). All these findings indicate that the presence of SMI is an important prognostic indicator, and SMI patients require attention. Our study found that the preventive effect of aspirin on total myocardial infarction was weakened after the inclusion of SMI, suggesting that aspirin may not exert an overall primary preventive effect on all myocardial infarctions patients. However, due to the heterogeneity of the study population and the limitations of SMI detection methods (electrocardiography used in previous studies might miss smaller infarctions, and not all patients produce Q waves after infarction), it is still challenging to demonstrate that aspirin is completely useless. Though screening SMI by electrocardiography is cost-effective, the sensitivity and negative predictive value of electrocardiography are lower than those of CMR (25). Accordingly, further studies are needed to determine, for example, the location and distribution of scar tissues using LGE-CMR to validate and evaluate the presence and extent of SMI.

Funding: This study was funded by grants from the National Natural Science Foundation of China (81700213) and the Medical and Health Technology Program of Zhejiang Province (2018263306).