Pancreatic cancer (PC) is the fourth most lethal malignancy, with a poor prognosis and a 5-year relative survival rate of only 9% (1). In patients with inoperable or unresectable PC, gemcitabine treatment is the frontline chemotherapy in PDA, though its mechanism of resistance remains unclear.

MicroRNAs (miRNAs), a class of small, endogenous single-stranded RNAs of approximately 22 nucleotides in length initially discovered in 1993 (2), often play a negative regulatory effect in animals and plants via targeting specific mRNAs for degradation or translation suppression (3). However, the emerging role of miRNAs as activators of gene expression by targeting gene regulatory sequences (4) has been fully recognized just recently. Place et al. described this novel miRNA-induced RNA activation (miRNAa) phenomena and discovered that miR-373 bound the E-cadherin promoter sequences and induced gene expression (5). Interestingly, its mechanism has since then been elucidated by several subsequent studies. A series of such studies were followed to elucidate the mechanism. Xiao et al. reported that miR-24-1 could serve as an enhancer trigger by modifying chromatin status favorable for transcriptional gene activation (6). In support to this view, Huang et al. revealed an endogenous function for miRNA in gene activation as miR-744 and miR-1186 could induce CCNB1 expression and reinforce cancer cell growth (7).

The differential expression of miRNAs has also been reported in modulation of immune infiltration. Frank et al. provided evidence for tumor-immune cell interactions shaping the immune cell phenotype and miR-375 acting as a crucial regulator of phagocyte infiltration and the subsequent development of a tumor-promoting microenvironment (12). In addition, Pyfferoen et al. reported that dendritic cell-derived miR-31 promoted lung cancer progression (13).

CIBERSORT is utilized to explore the relationship between immune infiltration and gemcitabine resistance. The bioinformatics tool of CIBERSORT was developed to deconvolve the expression matrix of immune cell subtype based on the principle of linear support vector regression (14). This deconvolution algorithm characterizes cell composition of complex tissues based on their gene expression profiles. In this study, CIBERSORT was used to assess the relative proportions of 22 tumor-infiltrating immune cells in PC and to investigate the relationship between the composition of tumor-infiltrating immune cells and gemcitabine therapeutic effect.

Here, we identified four differentially expressed miRNAs and their targeted DEmRNAs in gemcitabine resistant PC cells from the Gene Expression Omnibus (GEO) database using integrated bioinformatics analysis. Subsequently, through the bioinformatics tool of CIBERSORT, we explored the relationship between immune infiltration and gemcitabine resistance according to the gene expression profiles of PC from the TCGA database and found that gemcitabine therapeutic effects were closely associated to memory CD4+ T cells. Collectively, this study showed a T cell immune-related miRNAa regulatory network. Additionally, our findings provide insights into the role of memory CD4+ T cells in PC chemotherapy and can potentially help in the design of future treatments.

Gemcitabine-resistant PC cells (PANC-1-GEM) and its parental cells (PANC-1) used in this research were purchase from Suyan Co (Guangzhou, China). All cells were maintained in RPMI medium 1640 (Gibco Invitrogen, Grand Island, NY, USA) with 10% fetal bovine serum (FBS) (Gibco Invitrogen, Grand Island, NY, USA) and 1% antibiotics, in a humidified atmosphere containing 5% carbondioxide (CO2) and 95% air at 37 °C. Additionally, the PANC-1-GEM cells was cultured with 80 µmol/L gemcitabine to maintain drug resistance and gemcitabine was removed from RPMI medium 48 hours before any experiment was performed.

Cell viability ability was determined by using CCK-8 assay. CCK-8 assay was performed under the manufacturer’s instructions (Dojinodo, Shanghai, China). PANC-1-GEM and PANC-1 cells with transfection were seeded in 96-well plates at 5×103 cells per well and incubated with gemcitabine for 48 h. CCK-8 (10 µL per 100 µL) was added to each well and incubated for 2 hours at 37 °C before detection.

We firstly filtered and deleted the difficultly detected mRNAs or miRNAs with read count value =0 or missing values in more than 33.3% of samples. Then, the k-nearest neighbor algorithm (KNN) was used for filling in the missing values. The differentially expressed mRNAs (“DEmRNAs”) and miRNAs (“DEmiRNAs”) between gemcitabine resistant PC cells and their parental cells were screened out individually using the limma package in the R 3.3.2 software. The threshold for the expression of DEmRNAs and DEmiRNAs was P<0.05 and fold change >1.2. The DEmRNAs and DEmiRNAs whose expression trend was inconsistent in two mRNAs datasets or three miRNAs datasets were excluded. With R package pheatmap, hierarchical clustering analysis of DEmRNAs and DEmiRNAs were conducted.

Three bioinformatics algorithms, including miRDB, microT, and Targetscan were used to predict the targeted DEmRNAs. In the predicted results by Targetscan, the “Total context+ score” less than −0.2 was selected. Only mRNAs predicted by all three databases were considered as candidate mRNAs. The candidate mRNAs that intersected with DEmRNAs were screened out, and a miRNA-target gene network was constructed. The Cytoscape (version 3.7.1) software was utilized to draw this network.

Functional enrichment analysis of the key DEmRNAs in this network was performed based on Gene Ontology (GO) and Kyoto Encyclopedia of Genes and Genomes (KEGG) databases to identify the genes’ functions and pathways regarding gemcitabine-resistant PC. Metascape tool was used to display network relationships among DEmRNAs.

The Kaplan-Meier plotter is a web server for a meta-analysis based on discovery and validation of survival biomarkers (15). Its mRNA subsystems include 54k genes from 21 cancer types, and miRNA subsystems include 11k samples from 20 different cancer types. Gene expression data and relapse free and overall survival (OS) information are derived from GEO, EGA, and TCGA. The survival analysis tool in Kaplan Meier plotter was utilized to analyze the prognostic significance of DEmiRNAs and targeted DEmRNAs. Survival analysis was performed using the Kaplan-Meier method, and the hazard ratio with 95% confidence intervals and logrank P value were calculated.

DEmiRNAs in gemcitabine-resistant PC cells compared to their parental cells 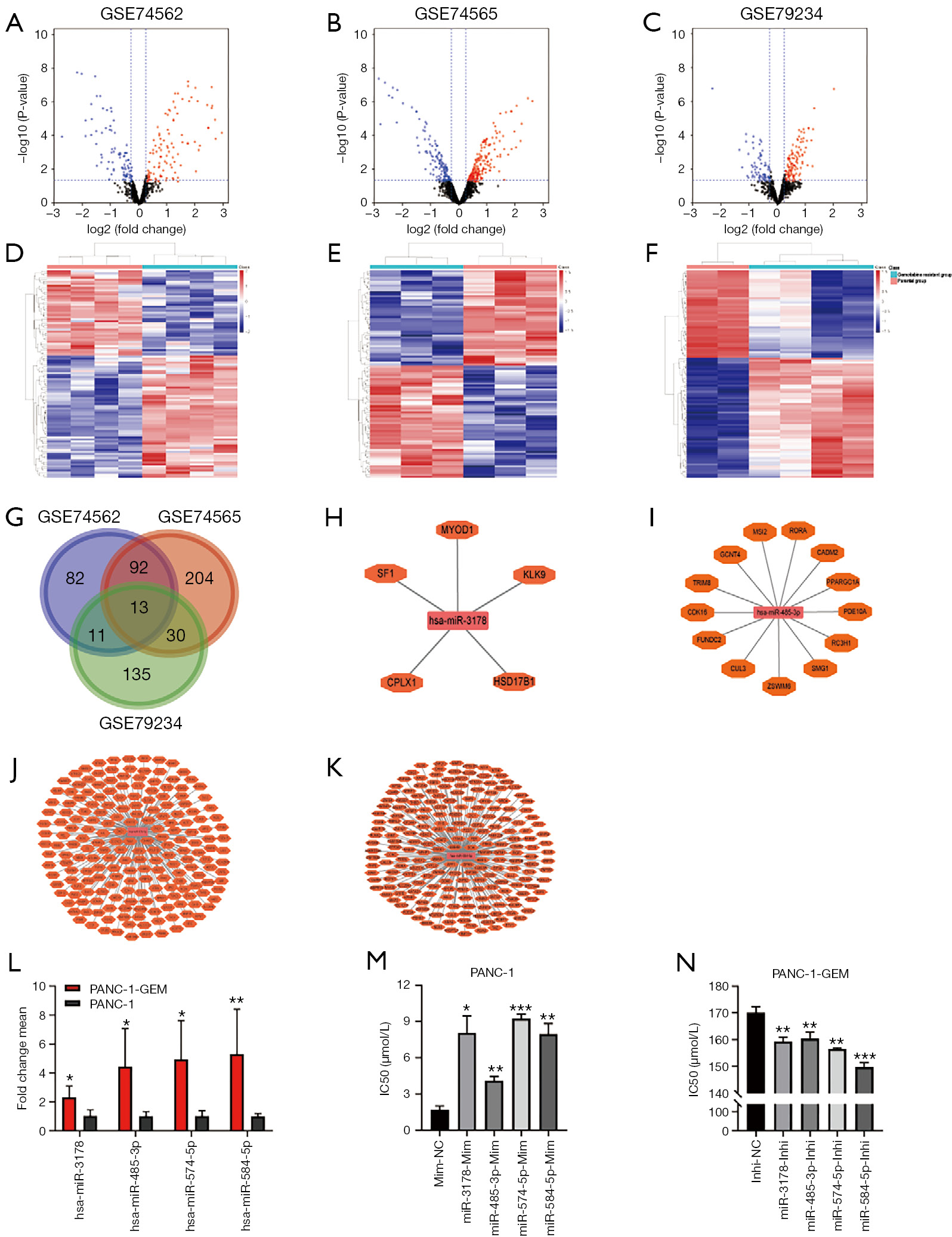 The four DEmiRNAs recognized above were mapped into miRDB, microT, and Targetscan databases to search for their target mRNAs according to the inclusion criteria. Their respective miRNA-target gene network was generated using Cytoscape software (Figure 1H,I,J,K).

DEmRNAs in gemcitabine-resistant PC cells compared with their parental cells

Compared with the parental cells, a total of 5,340 (3,084 up- and 2,256 down-regulated mRNAs) and 5,774 (3,518 up- and 1,715 down-regulated mRNAs) DEmRNAs were identified from GSE79953 and GSE80617 in gemcitabine-resistant PC cells (Figure 2A,B,C,D), respectively. Further intersection analysis showed that 1,565 mRNAs overlapped in two datasets (Figure 2E). Similarly, DEmRNAs with inconsistent expression trend were excluded. Furthermore, the remaining 952 DEmRNAs were performed for next analysis.

Functional enrichment analysis based on 952 DEmRNAs showed that the DEmRNAs related to PC gemcitabine resistance were involved in biological processes (BPs) such as regulation of cellular amino acid metabolic process and negative regulation of ubiquitin-protein ligase activity and molecular functions (MFs) such as protein channel activity in GO database (Figure 2F). In addition, they had an impact on cell components (CCs) such as proteasome complex, proteasome accessory complex, proteasome regulatory particle, proteasome regulatory particle, and lid subcomplex (Figure 2F). As for the KEGG database, proteasome and ribosome biogenesis in eukaryotes and RNA polymerase-related pathways were significantly enriched (Figure 2G). Consistent with GO and KEGG results, hsa03050:proteasome was enriched best using the tool of Metascape (Figure 2H,I)

The candidate mRNAs targeted by the four DEmiRNAs were intersected with the 952 DEmRNAs, and zero, one, five, and one target mRNAs were identified by hsa-miR-3178, hsa-miR-485-3p, hsa-miR-574-5p, and hsa-miR-584-5p, respectively. Particularly, the expression tendency of all four DEmiRNAs and their target mRNAs has increased in gemcitabine-resistant PC cells compared with their parental cells, which was consistent with miRNAa phenomena. The PPI network of seven targeted genes is displayed in Figure 4. 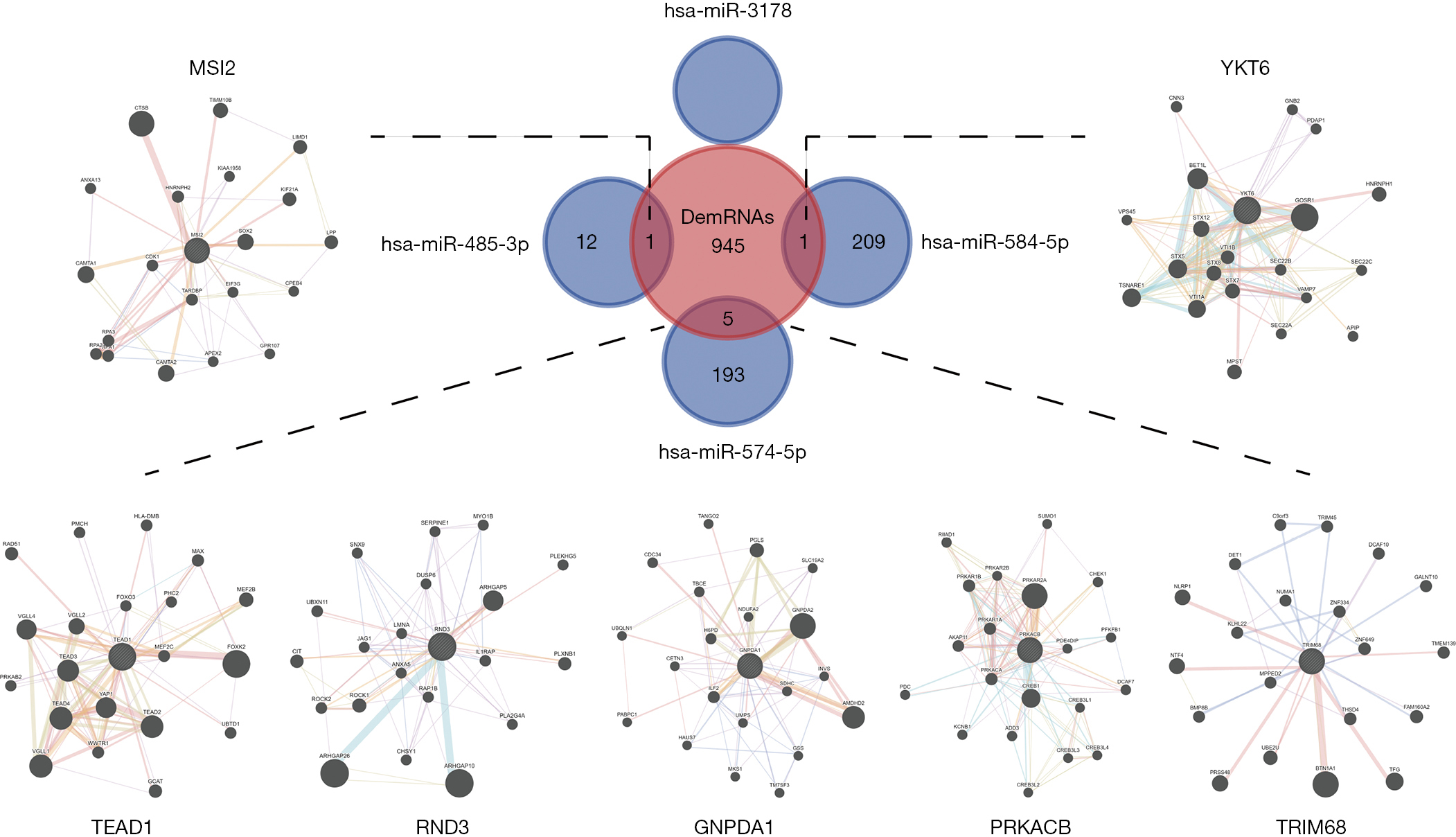 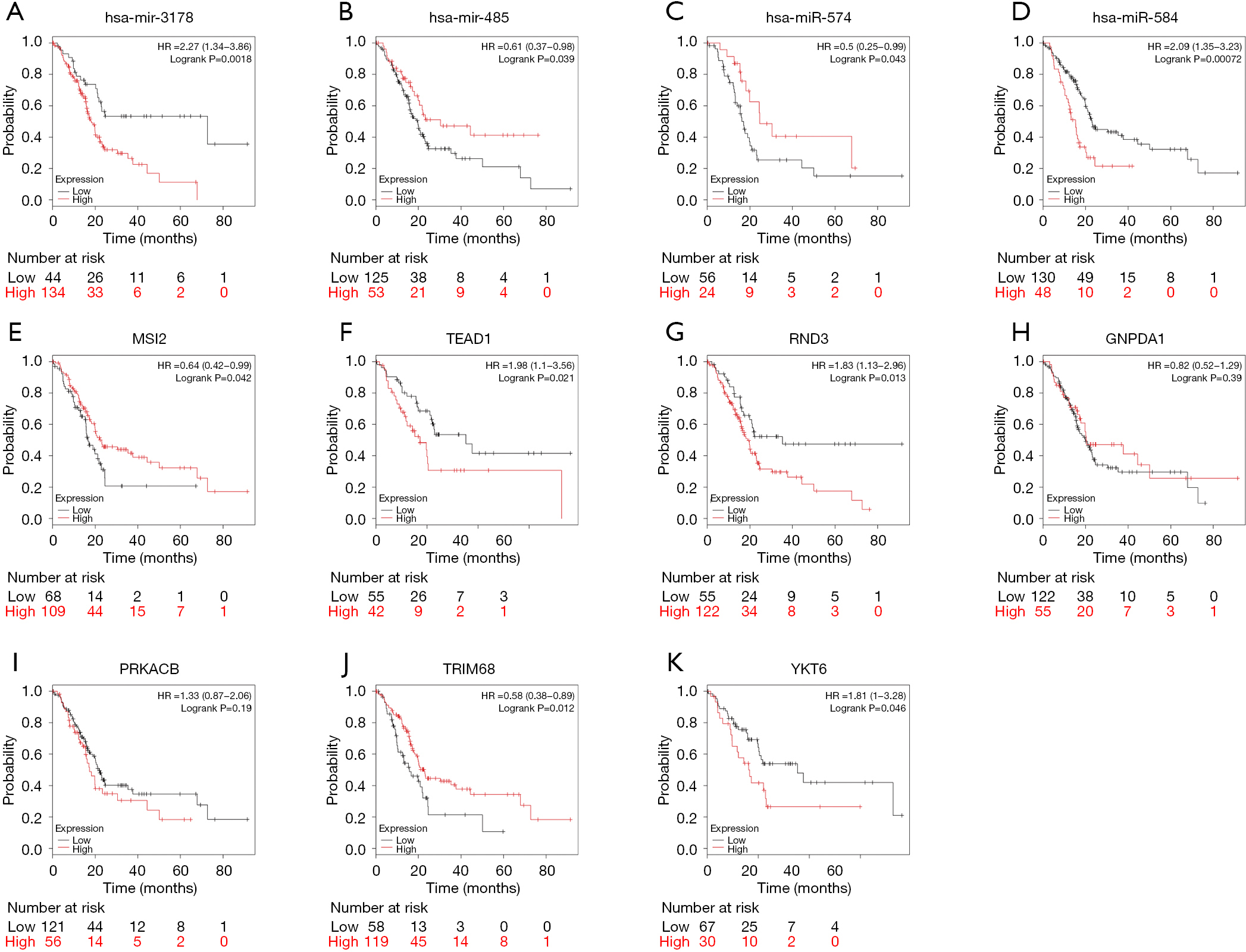 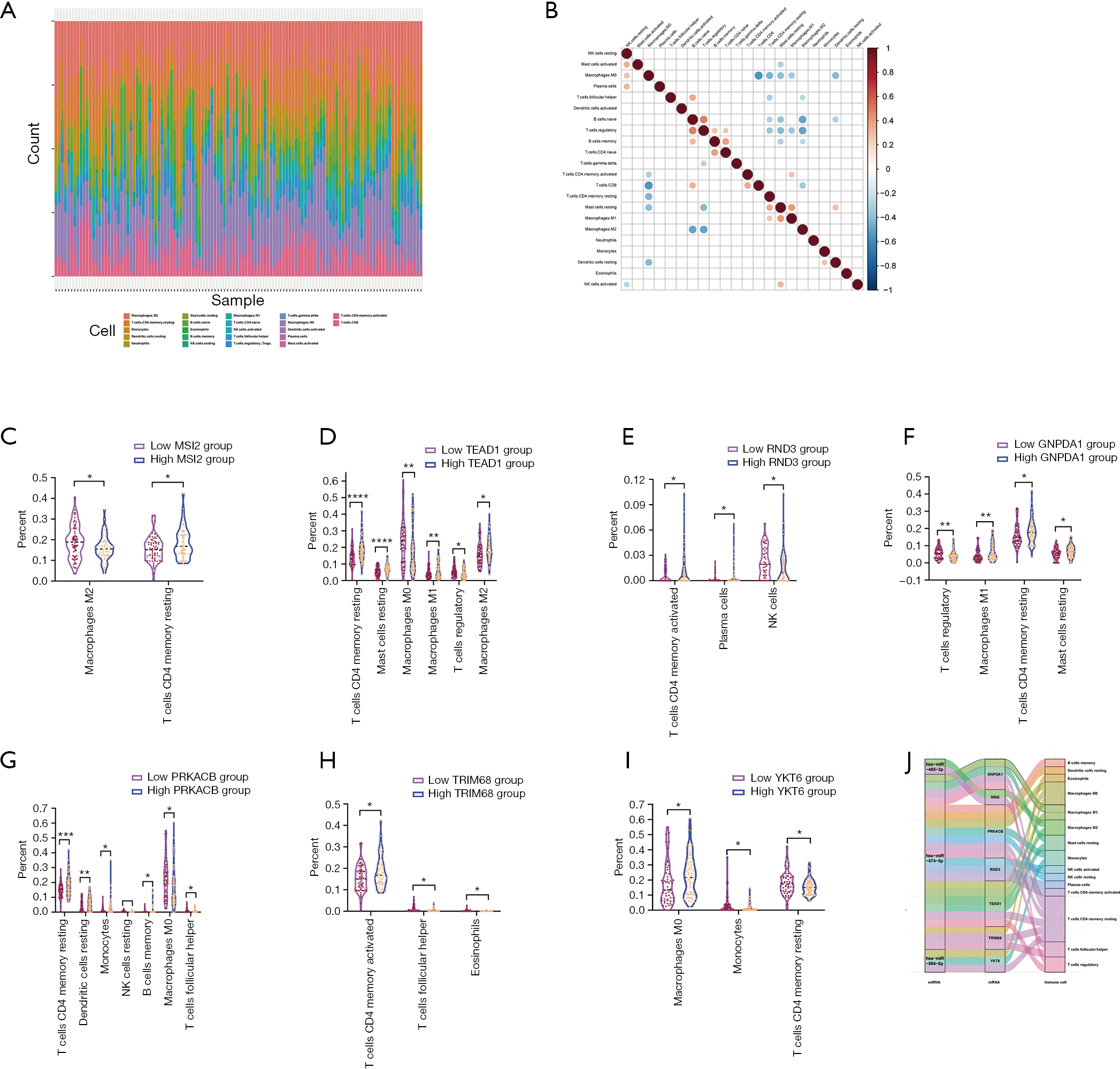 Three notable findings stand out in the present study. First, our study identified four DEmiRNAs (hsa-miR-3178, hsa-miR-485-3p, hsa-miR-574-5p, and hsa-miR-584-5p) and seven targeted DEmRNAs (MSI2, TEAD1, RND3, GNPDA1, PRKACB, TRIM68, and YKT6), all upregulated, which was consistent with novel hypothesis of miRNAa (4,6,17), in gemcitabine resistant PC cells compared with their parental cells. Second, we discovered that these seven targeted DEmRNAs in chemotherapy-resistant cells were associated with immune infiltration status, which was analyzed using CIBERSORT algorithm according to gene expression profiles of PAAD from TCGA database. Finally, we found that the gemcitabine therapeutic effect was closely associated with effector memory CD4+ T cells in PC patients.

It is generally accepted that miRNAs inhibit translation by mRNA degradation or destabilization and translational repression (18). Moreover, researches over the past decade have shown that miRNAs can not only suppress but also activate the expression of target genes (4,6,17), namely, miRNAa phenomena. In the present study, we identified four DEmiRNAs (hsa-miR-3178, hsa-miR-485-3p, hsa-miR-574-5p, and hsa-miR-584-5p) and their targeted DEmRNAs (MSI2, TEAD1, RND3, GNPDA1, PRKACB, TRIM68, and YKT6) from GEO database and found, unexpectedly, their expression tendency increased in the gemcitabine treatment group, which was consistent with miRNAa phenomena.

Gemcitabine therapeutic effect was proven to decrease memory T cells and promote naive T cell activation (27), consistent with our results. However, the intrinsic mechanism is totally unclear. In our study, we propose a completely fresh approach that gemcitabine therapeutic effect may alter fraction of CD4+ memory T cell through miRNA-induced RNA activation-targeted mRNA network in PC. None of the four DEmiRNAs (hsa-miR-3178, hsa-miR-485-3p, hsa-miR-574-5p, and hsa-miR-584-5p) had been reported to have an impact on CD4+ memory T cell. However, hsa-miR-3178 played a role in cancer immune surveillance by regulating DUSP1, PD-L1, and MUC1 (28). miR-485 restricts influenza virus infection by priming antiviral immune response (29,30) and is associated with the immune system in Alzheimer’s disease (31). miR-584 is significantly up-regulated in inflamed pulps and plays an intricate and specific role in inflammation and immunity (32). All seven DEmRNAs (MSI2, TEAD1, RND3, GNPDA1, PRKACB, TRIM68, and YKT6) did not show any direct effects on CD4+ memory T cell. Nevertheless, TEAD1/p65 complex could regulate innate immune response (33). PRKACB-encoding Cβ2 regulates innate as well as adaptive immune sensitivity in vivo (34). TRIM68 could regulate IFN production by targeting TFG (35). In addition, DEmRNAs can have an indirect effect on CD4+ memory T cell through PPI network. Most of DEmiRNAs and DEmRNAs influence immune system through a variety of ways.

Our study provides a splendid insight on gemcitabine resistance and association between chemotherapy resistance and tumor immune infiltration status in PC. However, further experiments are required, as we did not completely prove our conclusion.