The cuff technique of the rat lung transplantation (LTx) model was first reported by Mizuta et al. in 1989 (1). Various modifications and improvements have been reported in recent years (2-5). Although it has been thought that any trained surgeon could perform this technique successfully, the difficulties and disadvantages of this model still exist and often require a long learning curve (6). In addition, complications such as twisted blood vessels, pulmonary atelectasis, bleeding, and thoracic effusion still occur, although some recipient rats survive without any symptoms (4). Because improper devices and procedures for this technique could potentially lead to frustration and failure to complete one’s training, disclosing the improvements of the devices and procedures may shorten and simplify complex steps, thereby encouraging the trainee to continue. This article describes the key tricks and modifications of devices used in this improved cuff technique that optimize the rat LTx model, helping to achieve successful operations in a shorter time with a lower complication rate.

Small, handheld surgical instruments and larger equipment for rat LTx were used as in previous studies of Kyoto University (7,8) and as described in Figures S1-S3. We have modified the device for cuff preparation. We used a petri dish attached to two foam blocks. A groove and hole were carved on the foam blocks to match the ends of a bulldog clamp (Natsume Seisakusho Co., Ltd, Tokyo, Japan) (Figure 1). To prevent lung tissue injury, we modified the ends of the cuff tail from rectangular to round (Figure S4). 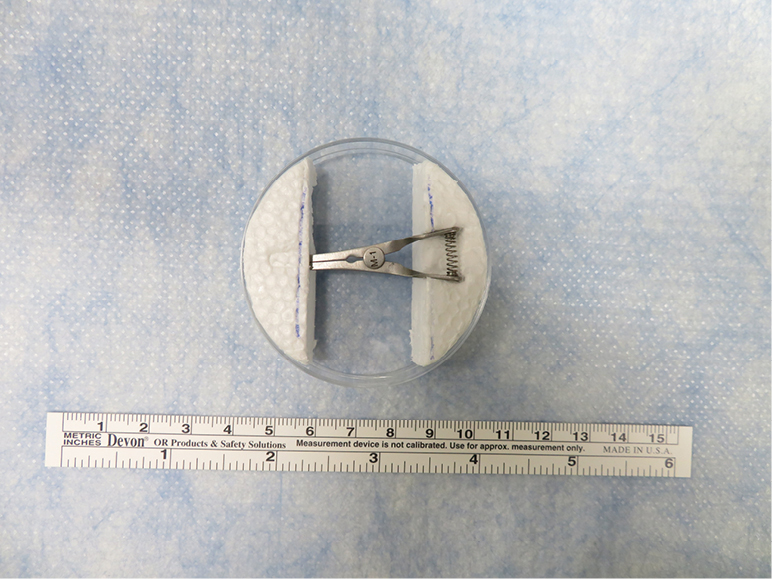 Figure 1 Graft preparation plate is modified by two foam blocks attached to a petri dish. A groove and hole were carved on the foam blocks to match the ends of a bulldog clamp.

Male Brown Norway and Lewis rats were purchased from Japan SLC, Inc. (Hamamatsu, Japan). Models of syngeneic and allogeneic transplantation were performed as described previously (7) (further details are described in supplementary material). Animals were sacrificed at ≥2 weeks postoperatively. All rats were maintained under specific pathogen-free conditions at The University of Tokyo. Animals were fed a standard diet and provided with water ad libitum.

Donor heart-lung block retrieval was performed as in previous studies (7,8). After the hilar structures of the left main bronchus, pulmonary artery (PA), and pulmonary vein (PV) with part of the left atrium were dissected, the hilar structures were consecutively everted around the cuff and secured by a preparatory 6-0 slipknot. Thereafter, the graft was rewrapped by organ perfusate-soaked paper and stored on ice for implantation (Videos 1,2).

A thoracotomy incision was made from the area of a palpable cardiac impulse on the chest wall and extended dorsally for about 3–4 cm. A blepharostat was used as a chest retractor (Speculum BANGERTER Large Right; Inami, Tokyo, Japan) to expose the thoracic cavity. The hilar structures were dissected and then clamped distally and proximally using two Satinsky clamps. The Satinsky clamps were then fixed in plastic clay to place mild tension on the bronchovascular structures. A ┴-shaped incision was made on the front wall of the PA using micro-scissors. V-shaped incisions were made from the inferior-to-superior branches of the PV and bronchus (Figure 2).

The “pendulum model” method was used for implantation. The bronchus was implanted first. The native bronchus and cuff body were secured using a preparatory 6-0 nylon knot positioned loosely around the recipient bronchus. The superior bifurcation of the bronchus was excised to eliminate any overlaps between the bronchus and the PA. The donor lung was then repositioned to allow a PA anastomosis without tension. The donor lung was repositioned again to allow creation of the PV anastomosis without tension. The PA and PV were implanted in analogous fashion as with the bronchus. After excising the left native lung parenchyma, the end rim of the native structures was cut for debonding before reperfusion (Figure S5) (Video 3). 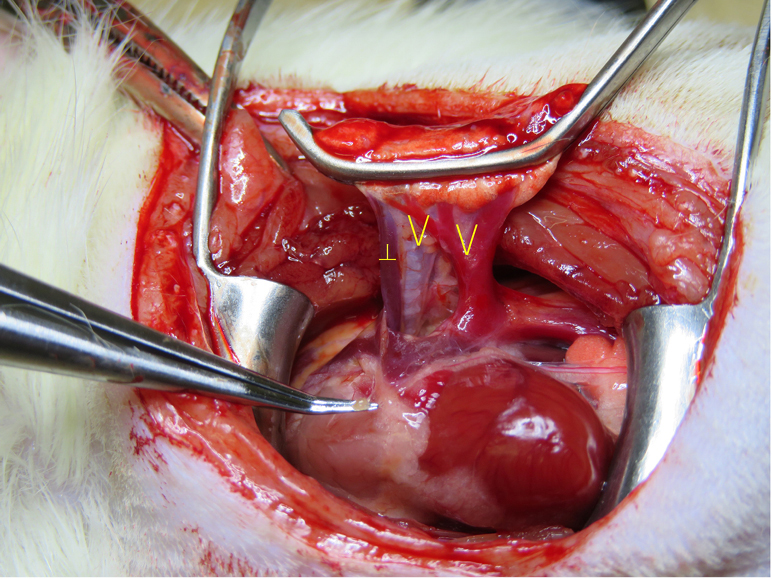 Figure 2 Hilar bronchovascular structure incisions are “V”-shaped on both bifurcations of the pulmonary vein and bronchus and “┴”-shaped for the pulmonary artery.

Assessment of chest-radiography and histology

Post-transplantation rats underwent chest plain radiography on postoperative day 7 to screen for complications such as atelectasis or to have recorded complications at the time of sacrifice. For routine histological evaluation, lung grafts were fixed in 10% formalin, embedded in paraffin, sectioned into 4-µm thickness, and stained with hematoxylin-eosin.

Key tricks and modifications on techniques and devices

The following devices and techniques were improved and modified in our series (Table 1).

In a consecutive series, 180 (syngeneic 33, allogeneic 147) anastomoses were completed by one performer (D Tian) without lacerations, twisting, or angulation of intraoperative bronchovascular structures and without bleeding at the vascular anastomosis. There were no intraoperation deaths, pneumothorax, or vessel thromboses. Partial or full pulmonary atelectasis was observed in 10 cases (5.6%). Five deaths (2.8%) were found at a follow-up time of 3–7 days, most likely due to pleural effusion.

Operation time of rat LTx of all procedures

The mean weights of the rats at the time of transplant of Lewis and Brown Norway rats were 239.7±42.8 and 291.2±23.0 g, respectively. The mean operative times of heart-lung block retrieval, cuff preparation, cold ischemia, warm ischemia and total procedure time are seen in Table 2. 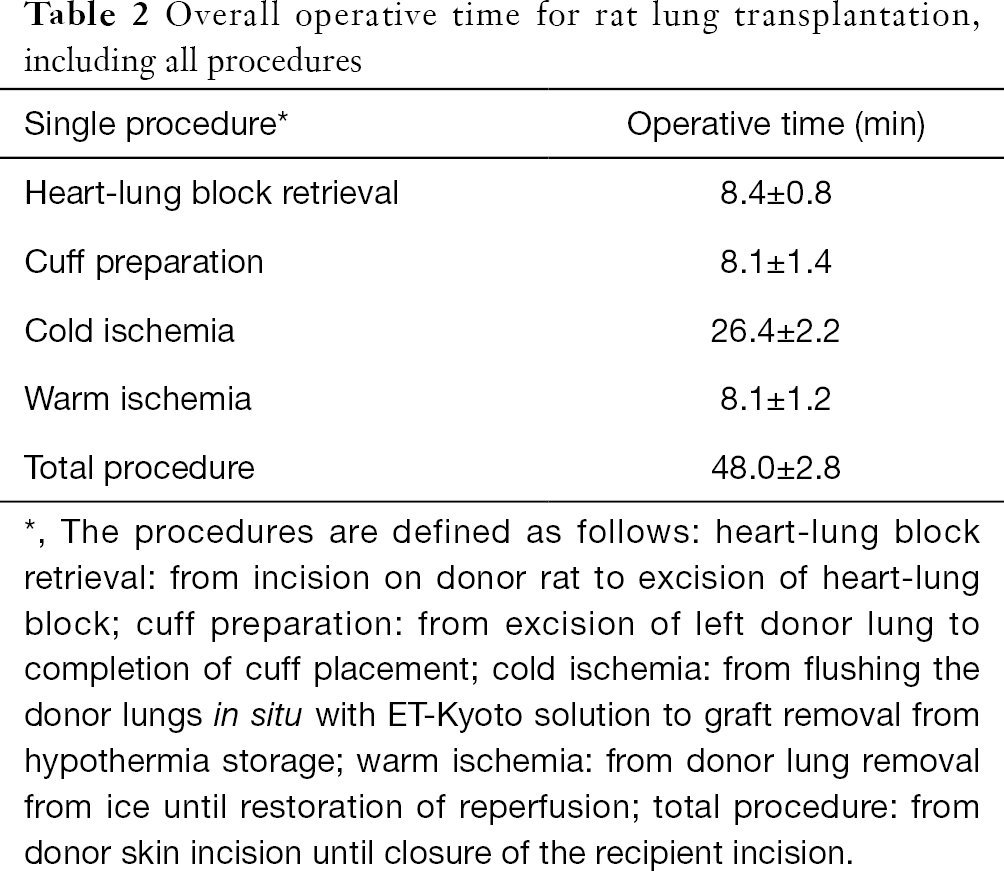 Although several studies have introduced technical modifications for rodent LTx after Mizuta and colleagues first reported the cuff technique (1), some important and difficult key procedures have not been described. Rat LTx remains a difficult procedure, necessitating a long learning curve. In this study, we modified the operative devices and the cuff techniques to make it easier to master the procedure with a low complication rate and a high success rate. Using this modified technique, one author (H Shiiya) completed the first successful case at the 10th trying. Because it is a more expeditious operation, the ischemic times were shorter than those in a previous study (1) with fewer complication and no intraoperative deaths.

The skin incision of the recipient is important for transplantation. It is impossible to measure the intercostal space on a rat before surgery. Most previous reports that described the incision location, however, relied on different intercostal spaces (3-6,10,11). Habertheuer et al. (12) started the skin incision 1 cm below the inferior margin of the scapula, which is unreliable because of the scapula is easily mobilized. In our series, we located the region of palpable cardiac impulse on the chest wall. This apical impulse region is at the level of the third or fourth intercostal space, as previously described (4,6,13,14). It seems more useful, however, to follow this apical impulse when performing rat LTx. Our series showed no failures in placing a suitable incision.

Another key trick is to locate the incisions on the recipient’s PV, bronchus, and PA. To shorten the warm ischemia period and minimize pulmonary injury, an expeditious technique is important. Most of the previous reports made a transverse incision on the front wall of the recipient’s hilar structures (3,9,12,15,16). Guo et al. (5) made the incision in a├shape toward all the structures. Jungraithmayr et al. (16) made the incision on the lower branch of the PV. We first introduced the V-shaped incisions from the inferior-to-superior branches on the PV and bronchus cuffs. This V-shaped incision follows a wide rim of structure ostium, which allows the donor graft to be easily implanted without laceration. To match the lengths of the Br and PV, the ┴-shaped incision is made on the front wall of the PA, which can well prevent proximal laceration at implantation. Guo et al. (5) reported a 5% intraoperative failure rate of their technique due to bleeding and PV injury during the operation. Our study showed no intraoperative failures with hilar structure lacerations.

The “pendulum model” method for implantation was proposed in our study. Previous investigators often chose vessels as the first step. Rajab et al. (11) addressed PV first, followed sequentially with the bronchus and PA. Sugimoto et al. (9) went in the opposite direction, with the PA, bronchus, and PV, respectively. In our study, we anastomosed the bronchus first because, compared with vessels, it is structurally solid and easy to anastomose without laceration. In addition, we cut the superior bifurcation of the bronchus before the PA anastomosis because the bronchus and PA are always located adjacent to each other. Previous studies have not been concerned about the rim of the native hilum structures before reperfusion. Because the rim of the structures may contract and compress the graft structures, we cut the rim of the native structures to release them. With this technique, no vessel thrombosis, inadequate blood supply, or airway compression occurred after reperfusion and reinflation. Regarding the implantation time, previous studies reported an implantation time (warm ischemia time) of 15.2–20.0 min (5,6,12). With our modified implantation technique, the warm ischemia time was only 8.1 min.

Previous studies also showed follow-up survival rates of <90%. The intraoperative deaths were mainly due to pleural effusion, venous cuff failure, or pyothorax (1,5,12). Habertheuer et al. (12) reported about 18.9% cases were lost because of severe pleural effusions during the postoperative period. With our approach, the total follow-up survival rate was 97.2% (175/180), with no intraoperative deaths. A high success rate not only saves cost and time, it can strengthen the operator’s confidence during surgery. All five deaths in our study were most likely due to pleural effusion. Minor bleeding from intercostal muscles is difficult to detect and may have caused the pleural effusion. As effusion accumulates, it may compress the grafted lung, causing a life-threatening complication. Thus, careful inspection is necessary before chest closure.

Pulmonary atelectasis is a common, severe complication of rat LTx. Although a rat can survive without obvious symptoms, the animal may not be used for further evaluation. In our study, only 5.6% of rats experienced graft atelectasis during the follow-up period, which appears to be an acceptable result for the rat LTx model. In our series, the post-LTx complications and follow-up deaths were rare. Reperfusion injury, a major cause of graft injury, is related to the ischemia time. A decrease in reperfusion pressure is thought to minimize this complication (17-19).

We developed modifications of devices and procedures of the cuff technique for the rat LTx model. The advantages of this modified cuff technique include its expeditiousness, low complication rate, and high rate of success. Our improvements could further facilitate rat LTx in a feasible, reproducible manner.

The authors acknowledge the Japan-China Sasakawa Medical Association for its contribution to this work. We thank the members of the Department of Thoracic Surgery, Graduate School of Medicine, Kyoto University, especially Dr. Akihiro Takahagi, Professor Toyofumi Chen-Yoshikawa and Professor Hiroshi Date for training one author (D Tian) in the original technique of rat LTx in 2017. We thank Nancy Schatken, BS, MT (ASCP), from Edanz Group (https://en-author-services.edanzgroup.com/), for editing a draft of this manuscript.

Conflicts of Interest: The series “Strategies to Achieve Long-Term Success of Lung Transplantation” was commissioned by the editorial office without any funding or sponsorship. MS and DT served as the unpaid Guest Editors of the series. DT serves as an unpaid Section Editor of Annals of Translational Medicine from Oct 2019 to Sep 2020. The other authors have no other conflicts of interest to declare.

Ethical Statement: The authors are accountable for all aspects of the work in ensuring that questions related to the accuracy or integrity of any part of the work are appropriately investigated and resolved. The institutional Animal Care and Use Committee of The University of Tokyo (Tokyo, Japan) authorized this study (approval No. H19-027).