The prevalence of nonalcoholic fatty liver disease (NAFLD) is rising dramatically worldwide, with approximately 1 billion individuals afflicted globally (1). NAFLD-related advanced fibrosis is considered to be the main risk factor among various disease spectrum of NAFLD (2,3) for all-cause mortality (4), especially for cardiovascular events (5). Patients with type 2 diabetes mellitus (T2DM) have extremely higher risk of NAFLD, which is around 49% to 62% (6,7). T2DM increases the risk of liver-related deaths, as well as overall mortality in NAFLD patients (6), meanwhile increases the risk of cardiovascular disease and accelerates the progression of macro and microvascular complications (8). In addition, patients with NAFLD presenting hepatocellular carcinoma in cirrhotic liver were more likely to be obese or have type 2 diabetes (9). The prevalence of diabetes around the world, especially in China, is getting more challenging in recent years (10). Therefore, screening for NAFLD-related advanced fibrosis should be considered in T2DM patients.

Telomere is duplicate sequences of (TTAGGG) that relates to shelterin proteins. Telomere is considered to protect chromosome from degradation (11). Oxidative stress-induced reactive oxygen species and chronic inflammation are major reasons for telomere shortening (12). Therefore telomeres are reported to be closely associated with metabolism disorder, such as obesity, diabetes, NAFLD, hypertension and dyslipidemia (13-16). Previous studies suggested that shorter telomere was observed in diabetes and NAFLD, similar as insulin resistance. Recently Kim et al. identified that shorter leucocyte telomeres were associated with advanced fibrosis among USA subjects (17). Considering that the association between telomere and NAFLD-related disease may be variable in different ethnicities (18,19), together with the higher prevalence of NAFLD-relevant fibrosis in diabetic patients, our study aims to investigate whether shorter leucocyte telomeres were linked to hepatic advanced fibrosis in Chinese diabetic patients.

A total of 483 participants were T2DM patients treated at Tongji Hospital (Wuhan, China) between Jan 2012 and May 2018, 41 were excluded according to exclusion criteria. Finally, 442 Han Chinese patients, ranging from 20 to 84 years old, were admitted under the following exclusion criteria: (I) over 210 gram of alcohol drinking every week for males, (II) over 140 gram of alcohol drink every week for females, (III) coexistent liver disease, (IV) treatment with systemic corticosteroids, (V) pregnancy, (VI) secondary diabetes. This study was approved by the ethics committee of Tongji Hospital. All the procedures complied with the provisions of the Declaration of Helsinki. Informed consents were obtained from all the patients.

AxyPrep Blood Genomic DNA Miniprep kit (Axygen, Corning, Inc., NY, USA) was used for Blood Genomic DNA extraction. The concentration of DNA samples was measured by Nanodrop. Genomic DNA were digested by Hinf I (R0155L, New England Bio Labs, Beverly, MA, USA) and RsaI (R0167L, New England BioLabs) at 37 °C overnight. Then, agarose gel electrophoresis was applied to separate the digested DNA at 70 volts for 18 hours. After that, denatured the gel in a pyrex container. Neutralize the gel for 30 min after drying the gel. Then the gel was transferred to a cylindrical hybridization tube. The gel was prehybridized with 10 mL prehybridization solution for 2 hours at 37 °C. A 32P-labeled telomeric probe was used to detect telomeres. The hot probe was made with 10 µL probe system (Deionized water 3.0 µL, T4PNK buffer 1.0 µL, 32P-labeled telomeric probe 5'-(CCCTAA)3-3' [(10 pmol) 1.0 µL, [γ32-P] ATP (370MB q/mL) 3.0 µL, T4PNK (8 U/µL) 2.0 µL], then incubated at 37 °C for 1 hour and T4PNK was inactivated by heating at 68 °C for 10 min. After discarding the hybridization solution, the hot probe was added to the hybridization solution and let it hybridize overnight at 37 °C. After the gel was washed, it was then exposed to a phosphor imager and scanned with a Typhoon system (Typhoon, GE Healthcare, Wisconsin, USA) separately, and the results were visualized with Image Quant software (Molecular Dynamics, Sunnyvale, CA). The weighted mean telomere length was calculated.

All data analysis was performed using SPSS (version 22.0). A value of P<0.05 was considered statistically significant. Student’s t-test was used to test the difference between means of normally distributed data. Distribution of the continuous variables was carried out by Kolmogorov-Smirnov Test. Mann-Whitney test was applied to analysis Non-normally distributed data. χ2 test was applied to examine categorical data. Pearson’s correlations and Spearman’s correlation were performed to examine the relationship between leucocyte telomere length (LTL) and other parameters. Multiple logistic regressions were performed to identify the risk factors for advanced fibrosis. The ANOVA trend analysis with polynomial contrast was used to estimate the association between hepatic fibrosis and eGFR. The accuracy of LTL as a biomarker for advanced fibrosis in T2DM patients was calculated by area under the receiver operating characteristic (ROC) curve. 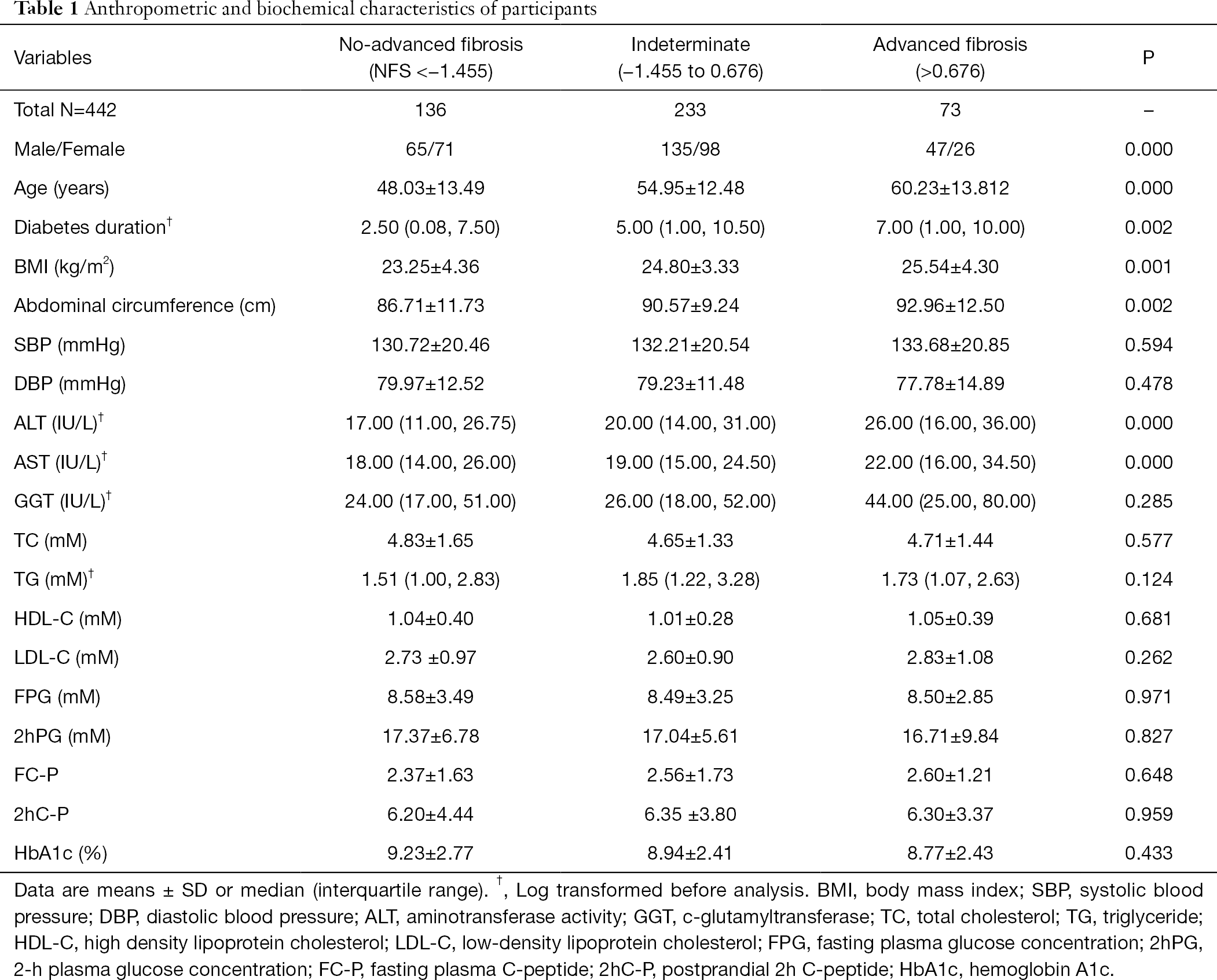 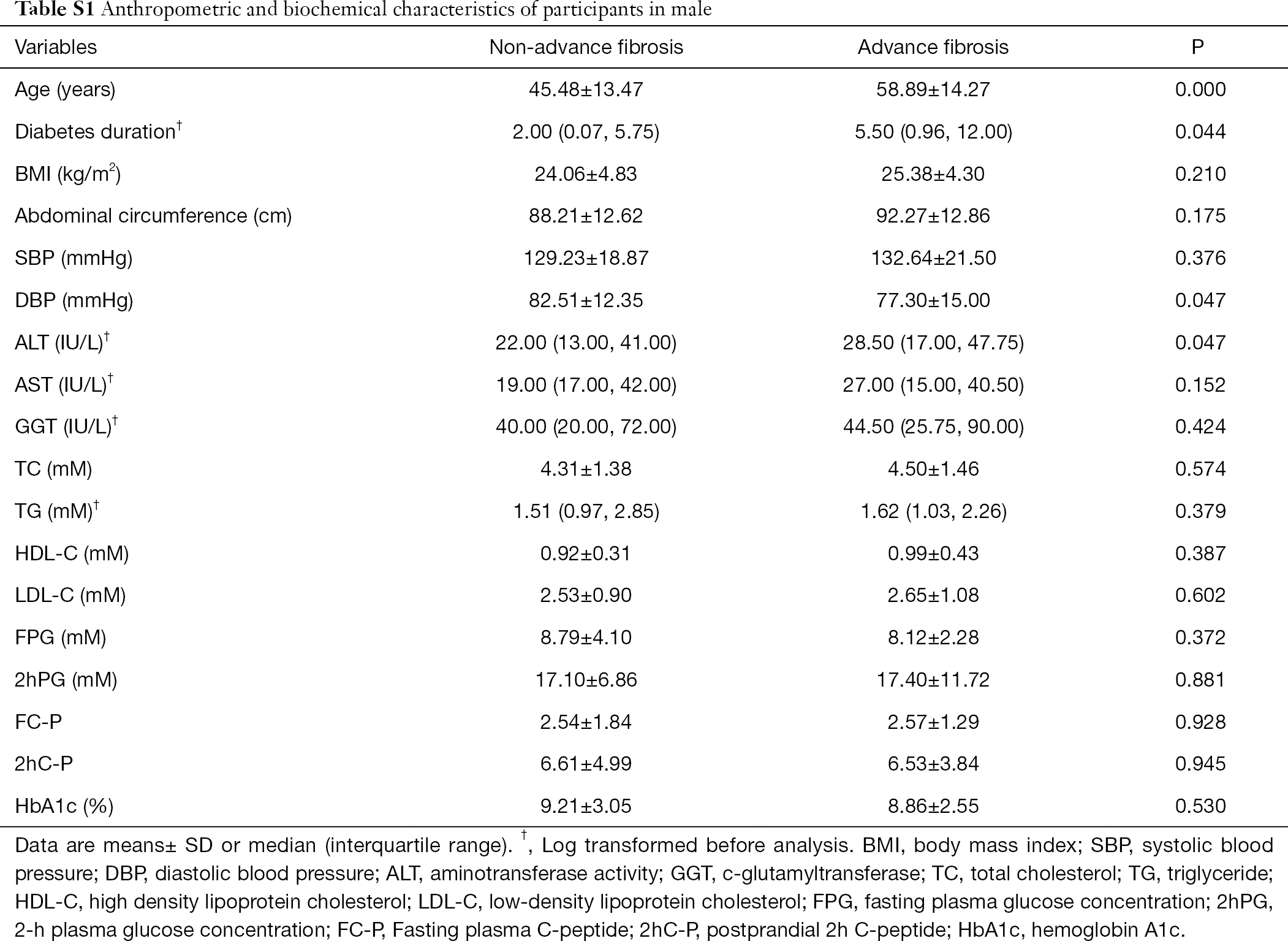 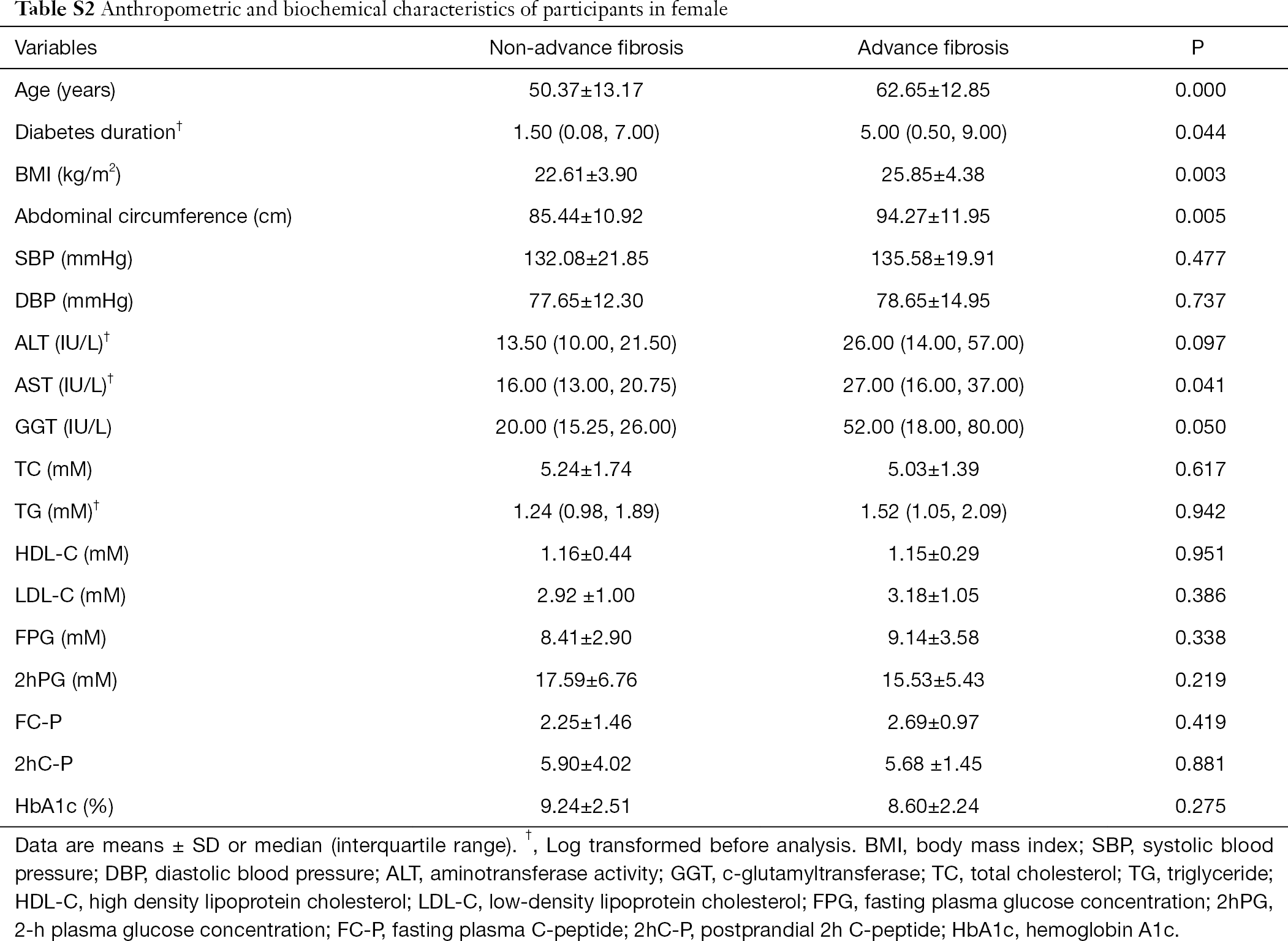 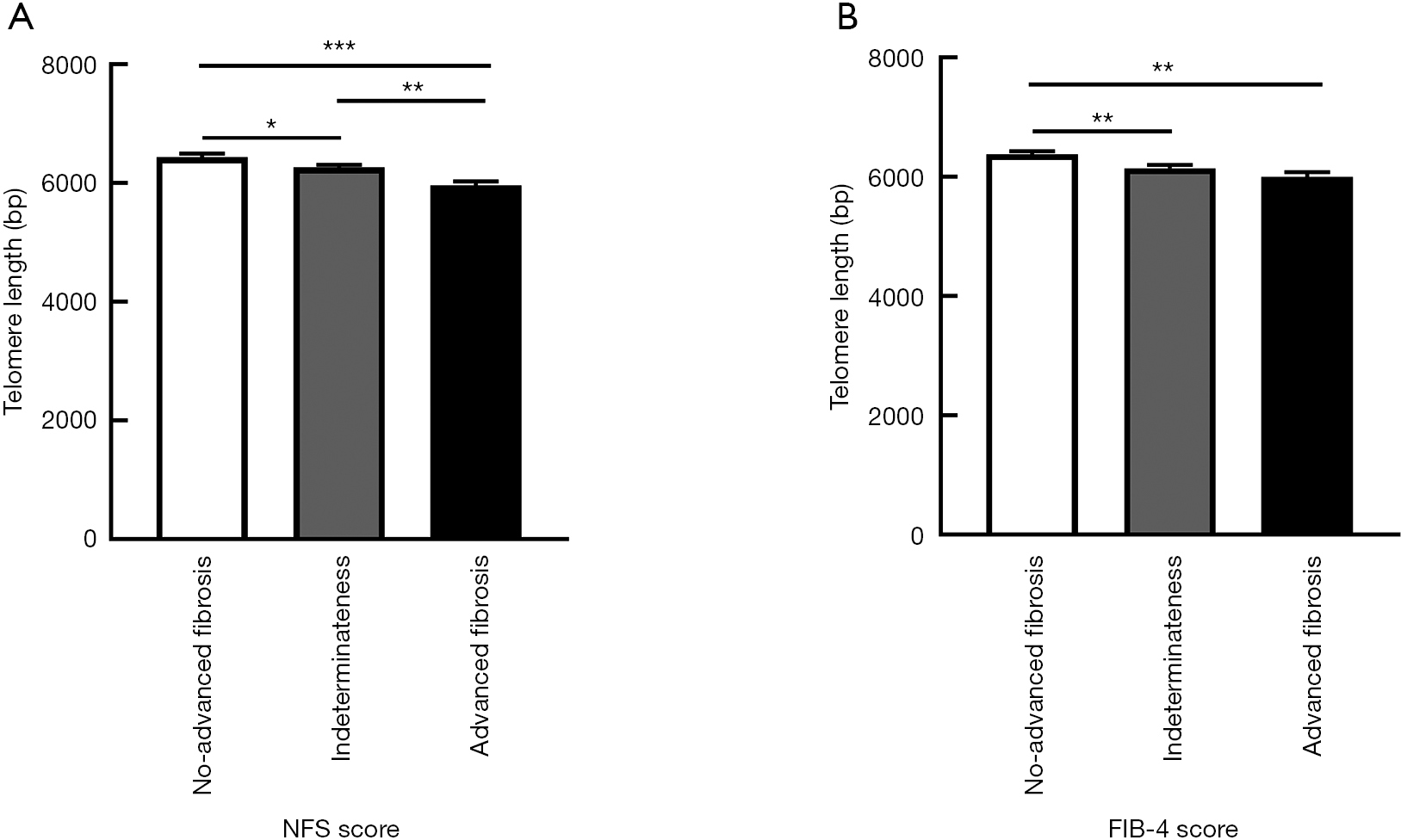 Association of LTL with age and diabetes duration

We next investigated the correlation between LTL and a cluster of anthropometric and biochemical parameters (Table 2). The analysis indicated a significant negative association of LTL with age (r=−0.273, P<0.001), diabetes duration (r=−0.107, P=0.038) and triglyceride (TG) (r=0.153, P=0.006). But the association of LTL with diabetes duration and TG was no longer significant after adjustment for age. 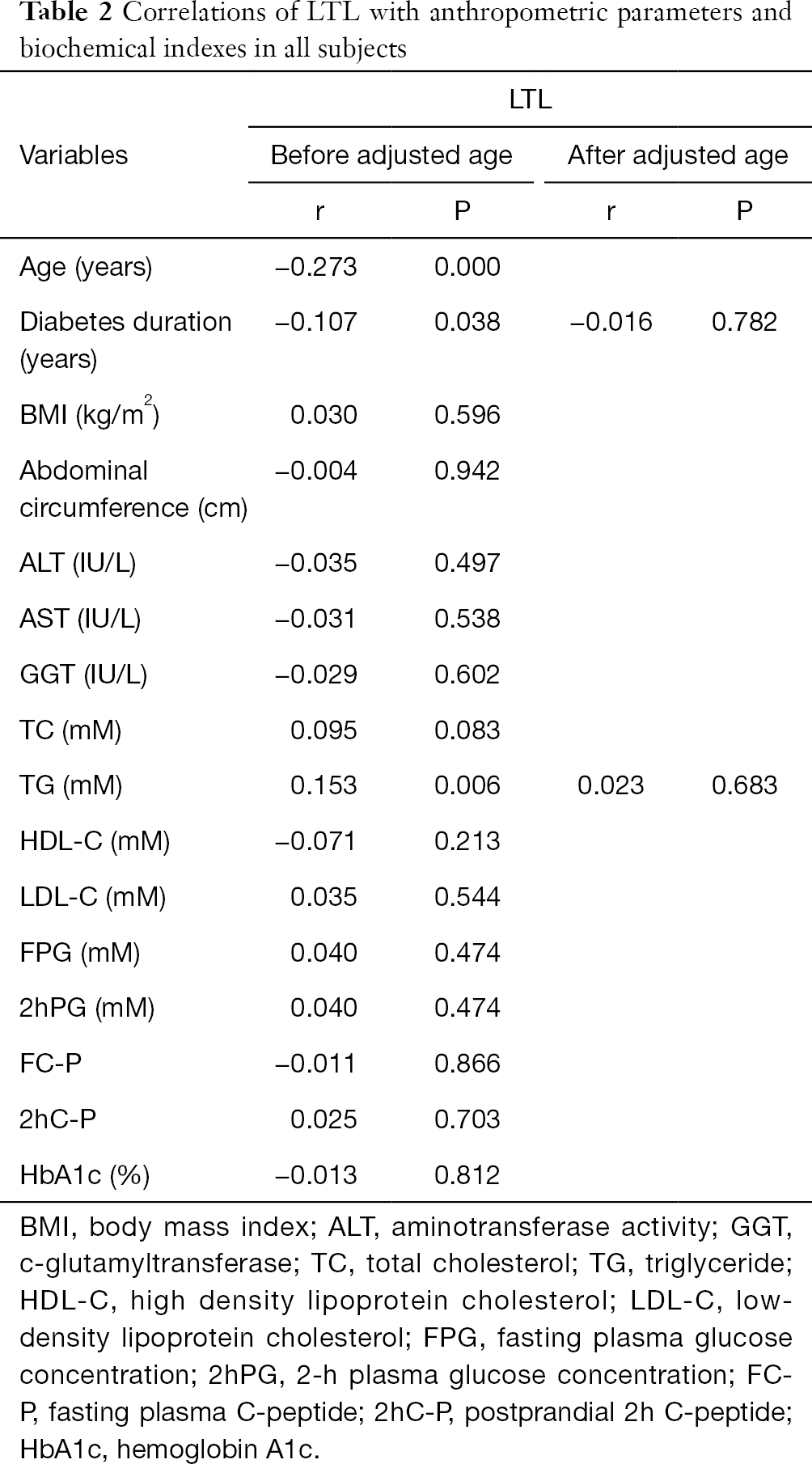 LTL as an independent factor of advanced fibrosis in T2DM patients 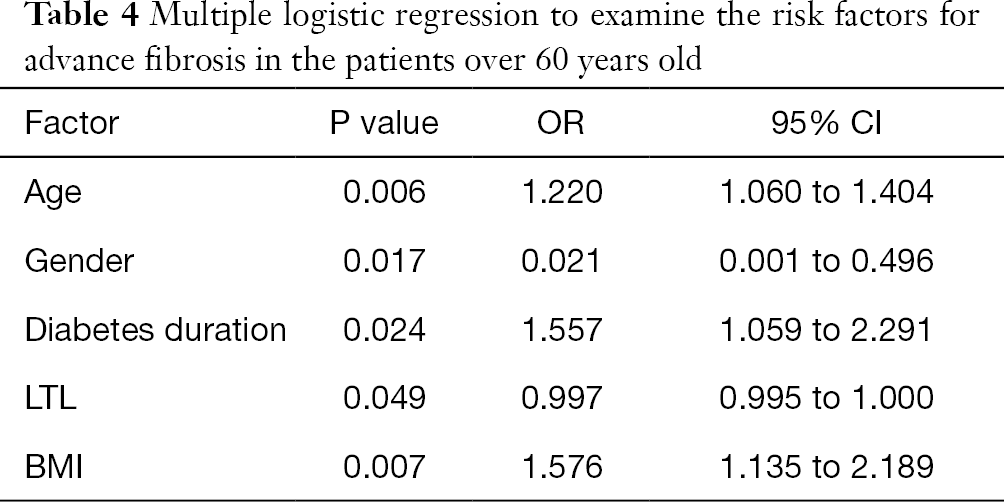 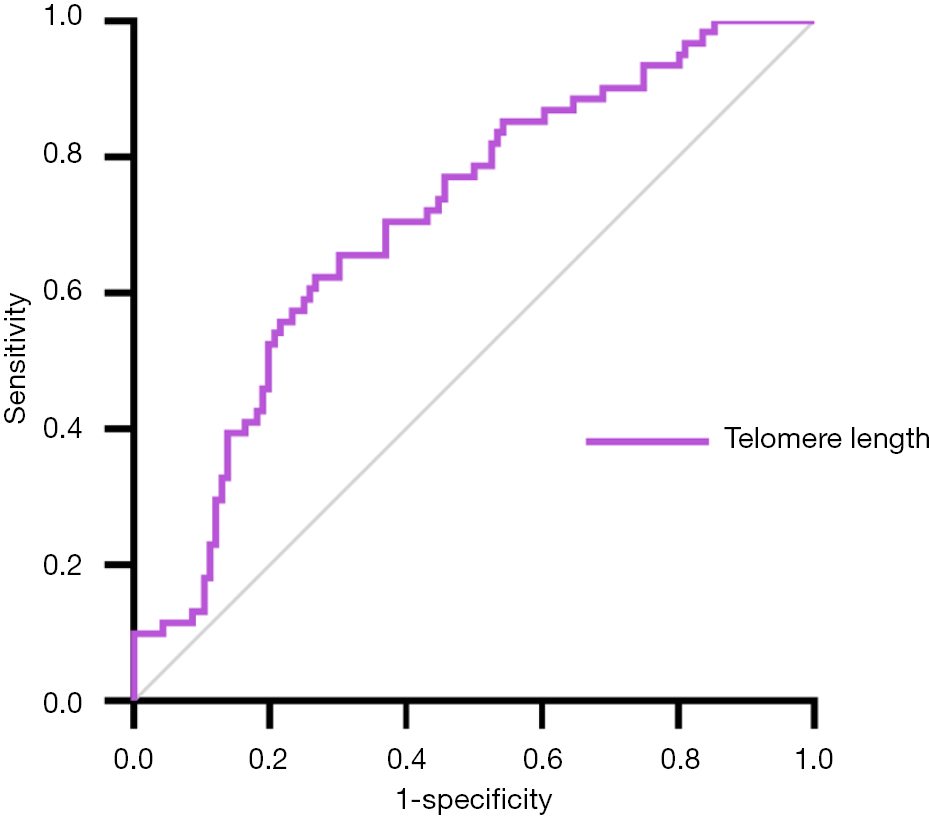 The severity of hepatic fibrosis was reported to reversely relate to eGFR (22). Our study also suggested that diabetic patients with advanced fibrosis had lower eGFR. Meanwhile higher prevalence rate of MACE (4) and diabetes complications were observed in advanced fibrosis in current study, which was consistent with previous studies (23). Due to the strong relation between diversified hazard and advanced fibrosis, it’s necessary to identify the biomarker for advanced fibrosis in T2DM patients.

Our finding suggested that advanced fibrosis had significantly shorter LTL in T2DM patients, no matter when advanced fibrosis was estimated by NFS and FIB-4 score system. In fact, shorter telomeres were also reported to link to other chronic liver diseases, such as alcoholic liver disease and viral hepatitis (24,25). Furthermore, patients with cirrhosis had shorter telomere than age-matched controls, and the association of short telomere with hepatic cirrhosis could be explained by the TERE gene variants which were components of telomerase (26). Recently, Kim et.al found that short LTL was reversely correlated with liver fibrosis, and this correlation was more obvious in elder subjects as well as among non-Hispanic Whites. Diabetes and obesity could not further promote the risk of advanced fibrosis in the continuous National Health and Nutrition Examination Survey (NHANES) in USA. Considering that the correlation between LTL and NAFLD-related disease is largely affected by ethnicity (18,19,27), it is still necessary to explore the relationship between LTL and liver fibrosis in Chinese diabetic patients. In accordance with previous study (17), this study identified that shorter LTL was closely related to advanced fibrosis in Chinese diabetic patients for the first time. And this correlation was confirmed, even after adjusting for age and gender.

The specific mechanism between short telomere and fibrosis was still remains obscure so far. Telomeres are regarded to protect chromosomes tips from degradation, end-to-end fusion and compensate for the DNA loss (31). Telomeres become shorter gradually during each cell division by DNA replication, so senescence or apoptosis may trigger cellular signaling cascades which may lead to shortened telomeres (32). Chronic liver injury induced by NAFLD lead to a series of pathophysiological changes, which include hepatic regeneration, increased cellular turnover and dysfunctional telomere repairs induced progressive telomere shortening (33,34). These pathophysiological changes may finally cause liver fibrosis. And oxidative stress is supposed to lead to reactive oxygen species and chronic inflammation, which may induce telomere shortening. Based on cross-sectional and prospective studies (35,36), chronic hepatic injury was reported to be significantly associated with the T2DM, In turn, T2DM leading to oxidative stress (37) and elevation of liver enzymes, induces progressive hepatic damage and regeneration. Therefore, T2DM may further damage fatty liver, and induce progressive telomere shortening.

The strengths and limitations were discussed as follow. First, our study uncovered that shorter LTL was associated with NAFLD-related advanced fibrosis in T2DM patients. Therefore, it may provide a clinically safe, feasible and effective method to detect advanced fibrosis by measurement of LTL. Second, the southern blot-based method, terminal restriction fragment analysis, was used in our study to measure LTL, which is considered as the gold standard. This method is more accurate and repeatable compared to quantitative PCR in other studies. There were several limitations of our study. First, our study did not apply more accurate advanced fibrosis diagnosis methods such as liver biopsy. Second, we did not apply more accurate NAFLD diagnosis methods, such as CT, MRI, or biopsy-proven steatosis. Third, our study was cross-sectional, and the sample size was relatively small. In the future, we plan to perform longitudinal studies, which will be essential to evaluate the role of telomere length as a potential predictor to assess the pathogenesis of advanced fibrosis in T2DM patients.

In summary, our findings may have established a critical role for short telomere length as a biomarker for NAFLD-related fibrosis in diabetic patients. In addition, our results suggest that diabetes duration can be considered as a risk factor in the detection of advanced fibrosis in old T2DM patients. Further studies will be conducted to estimate the role of short telomere length in diagnosing NAFLD-advanced fibrosis identified by liver biopsy in T2DM patients.

We would like to thank Professor Yong Zhao from Sun Yat-sen University for his technical advice and assistance.

Ethical Statement: The authors are accountable for all aspects of the work in ensuring that questions related to the accuracy or integrity of any part of the work are appropriately investigated and resolved. This study was approved by the ethics committee of Tongji Hospital. Informed consents were obtained from all the patients.