Cardioprotection of cortistatin against isoproterenol-induced myocardial injury in rats

Although an increase in public awareness and the improvement of therapeutic strategies including the use of antiplatelet drugs, thrombolytic drugs, and percutaneous coronary intervention, acute myocardial infarction (AMI) remain as one of the major causes of morbidity and mortality in patients with ischemic heart diseases (IHD) worldwide. Myocardial injury, including AMI, is a common feature of IHD. Although the pathogenesis of myocardial injury remains unclear, it is involved in multiple mechanisms, such as endoplasmic reticulum stress (ERS), oxidative stress, apoptosis, autophagy, and inflammation (1). There is a lack of consensus concerning the best therapeutic strategies, even though the mechanism of AMI has been extensively studied. Therefore, it is important and urgent to investigate the pathogenic mechanism of myocardial injury and to explore new myocardial protection strategies in the field of cardiology.

An increasing number of studies have indicated endogenous bioactive peptides play an important role in reducing myocardial injury and exerting cardioprotective effect (2). Cortistatin (CORT) is a new endogenous bioactive peptide originally found in the cerebral cortex and hypothalamus (3). Further studies indicated that CORT was widely expressed in the nervous, endocrine, and immune systems, and in areas such as the brain cortex, stomach, pancreas, monocytes, macrophages, and dendritic cells (3). CORT has been shown to exert multiple biological effects, including increased sleep, anti-nociception, anti-inflammation, induction of immune tolerance, and regulation of endocrine and metabolism, through activating somatostatin receptors (SSTRs) and/or growth hormone secretagogue receptor 1a (GHSR1a) (3,4).

In recent years, increasing importance has been attached to the protective role of CORT in the development of cardiovascular diseases since CORT and its receptors are widely expressed in heart and blood vessels (5). Several studies have indicated that CORT can attenuate the proliferation and migration of vascular smooth muscle cells (VSMC) (6,7), alleviate autoimmune myocarditis in mice immuno-induced by a fragment of cardiac myosin (8), and inhibit atherosclerosis in ApoE-deficient mice fed western-style diets (9). Our experimental results showed that CORT could inhibit vascular calcification in rats in vivo and in vitro (10,11), and suppress myocardial apoptosis and activation of cardiac fibroblasts in rats during sepsis (12,13). In the previous study, we also found CORT could improve heart function in rat myocardial infarction induced by left anterior descending coronary artery ligation (14). However, the role and the underlying mechanisms of CORT in the development of myocardial injury remain obscure.

Therefore, the present study was designed to examine whether CORT could protect rats from myocardial injury induced by subcutaneously injecting isoproterenol and to clarify the possible mechanisms. It is hoped that this will provide a novel target for the prevention and treatment of myocardial injury and its related diseases.

Male Sprague-Dawley (SD) rats (200±20 g) were provided by The Second Affiliated Hospital of Harbin Medical University. All experimental protocols conformed to the Animal Management Rule of the People’s Republic of China (Ministry of Health, China, document no. 55, 2001), and the Animal Care Committee of Harbin Medical University Health Science Center.

Induction of myocardial injury in a rat model and animal groups

All rats were kept at room temperature (24±1 °C), with humidity at 50–55%, in a 12/12 h light/dark ratio with ad libitum access to standard rat feed and water. They were randomly divided into four groups (8 rats in each group): (I) control group, and rats received subcutaneous (s.c.) injection with equal volume saline daily for 2 days; (II) ISO group, a rat experimental model of myocardial injury was induced by ISO as described previously (15) with rats receiving s.c. injection with ISO 85 mg/(kg·d) for 2 days; (III) ISO + CORT 25 µg/(kg·d) group and ISO + CORT 50 µg/(kg·d) group, rats received s.c. injection with CORT 25 µg/(kg·d) and CORT 50 µg/(kg·d) for 3 days, respectively, which began on the day before ISO treatment. All animals fasted for 12 h before they were deeply anesthetized by 10% chloral hydrate (3 mL/kg, intraperitoneal administration). Then, blood samples were collected and centrifuged at 3,500 rpm for 15 min for separating serum that was stored at −20 °C for further analysis. At the same time, hearts were removed and saved for testing as required.

Hematoxylin and eosin (HE) staining

After removing large blood vessels and epicardial adipose tissue, hearts were washed with cold saline and blotted dry with filter paper. The heart was cut into two halves from the central plane of the left ventricle. After the apexes were fixed for 24 h in 4% paraformaldehyde, they were dehydrated and then embedded in paraffin, and cut into 5-µm-thick sections. These sections were stained with HE, and then examined and photographed under a light microscope for pathomorphological changes.

Enzyme activities of LDH and CK-MB and MDA content were measured in the serum of rats with the use of corresponding kits obtained from the Nanjing Jiancheng Bioengineering Company according to the manufacturer’s protocols.

Western blot analysis was performed as previously described (11). In brief, tissue samples were homogenized at 4 °C and lysed on ice for 15 min with 10 volumes of tissue lysis buffer, followed by centrifugation (4 °C, 13,500 rpm) for 20 min. The supernatants were used as protein samples. Protein concentrations were determined with the use of the enhanced bicinchoninic acid (BCA) Protein Assay kit (Beyotime, Nantong, China), Protein samples (50 µg) were separated by 10% sodium dodecyl sulfate-polyacrylamide gel electrophoresis (SDS-PAGE) and transferred to polyvinylidene fluoride (PVDF) membrane. The PVDF membrane was incubated with 5% non-fat dried milk for 1 h at 37 °C. Then, the membranes were incubated overnight at 4 °C with primary antibodies: anti-GRP78 (1:1,000), anti-Caspase-12 (1:1,000), anti-CHOP (1:500), anti-p62 (1:500), anti-Beclin-1 (1:1,000), anti-LC3 (1:1,000), and anti-glyceraldehyde-3-phosphate dehydrogenase (GAPDH) (1:20,000), followed by the secondary antibody for 1 h at 37 °C. They were visualized by the enhanced chemilumescent (ECL) detection system and analyzed by Image Lab software. Protein levels of GRP78, Caspase-12, CHOP, p62, Beclin-1 and LC3 were normalized to that of GAPDH.

CORT attenuated the increased protein levels of GRP78, CHOP, and Caspase-12 in rats induced by ISO 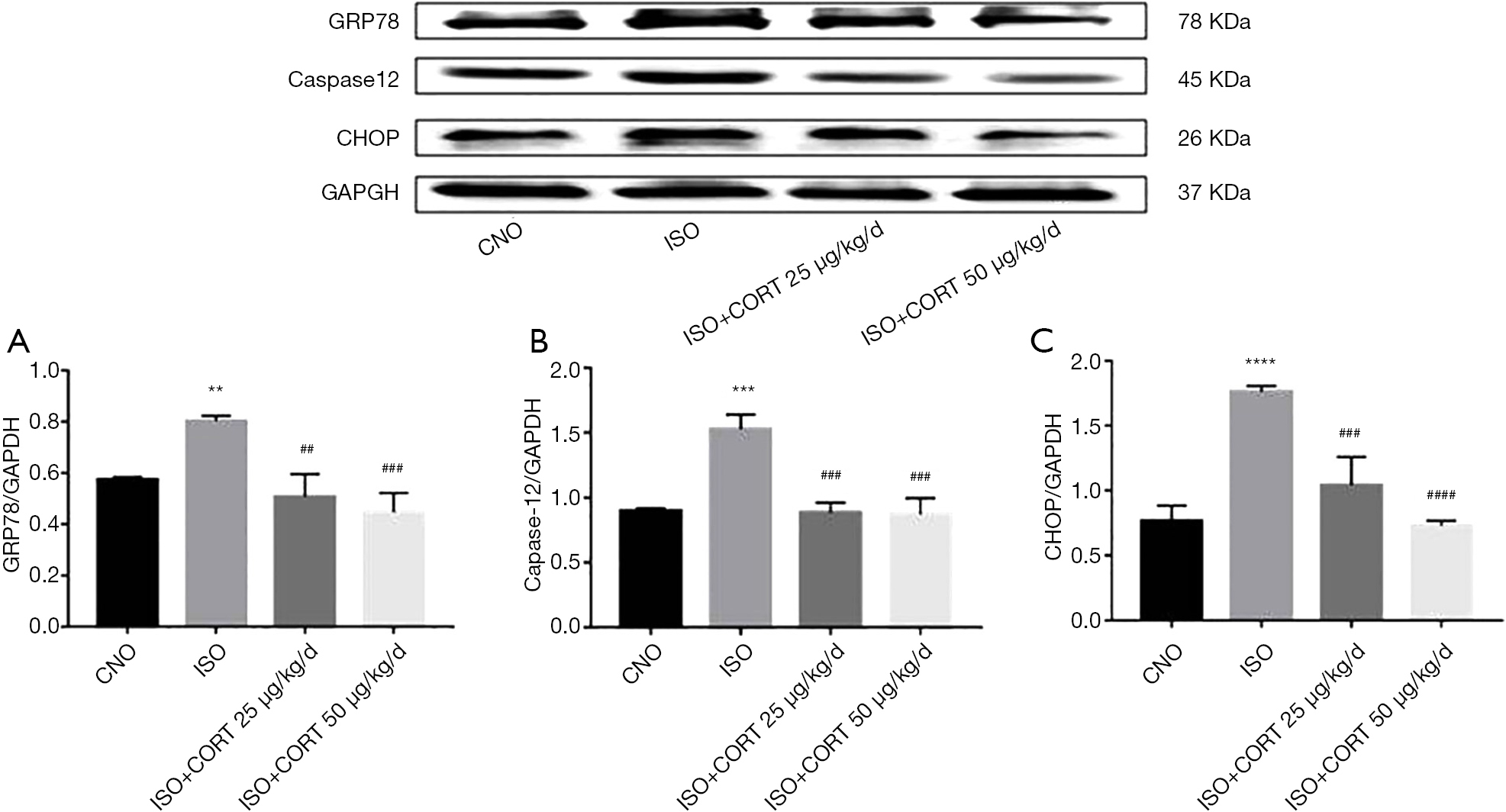 CORT inhibited the increase of LC3-II, LC3-II/I, Beclin-1 and p62 in rats induced by ISO

In this study, the administration of CORT alleviated myocardial injury in rats induced by ISO, as shown by its reduction of the increased activities in LDH and CK-MB, and by its alleviating of the pathological myocardial damage and inflammatory cell infiltration. Moreover, we demonstrated that this cardioprotection of CORT was likely mediated via reducing lipid peroxidation, ERS, and autophagy.

ISO is a beta-adrenergic receptor agonist that has been widely used to induce experimental animal models of myocardial damage, resulting in morphological and biochemical changes in the heart similar to the change in humans (17). In clinical practice, LDH and CK-MB are released into the blood during myocardial injury, and there is a significantly positive correlation between elevated LDH and CK-MB and ischemic myocardial injury (18). Therefore, LDH and CK-MB are often used as indicators to assess the extent of ischemic heart damage. In the present study, the levels of LDH and CK-MB were significantly elevated in the ISO group when compared to the levels in the control group. Moreover, myocardial tissues were infiltrated by massive inflammatory cells, and became loose, and had obvious myocardial cell rupture in rats of the ISO group compared to the control group. These data indicate that an experimental rat model of acute myocardial injury was established, which was consistent with the model of myocardial ischemic injury induced by ISO by Garg et al. and Akila et al. (19,20). Moreover, we demonstrated that different doses of CORT could reduce the ISO-induced increase of LDH and CK-MB and pathological morphological changes in the rat in a dose-independent manner. This provides the first in vivo evidence that CORT protects myocardia from ISO-induced injury.

Oxidative stress and lipid peroxidation are involved in the development of myocardial injury. In this study, we found that the serum MDA level was significantly higher in the ISO group than that in the control group. It has been shown that ISO can increase myocardial contraction and oxygen demand, resulting in electron leakage in the respiratory chain. These free electrons interact with molecular oxygen to create reactive oxygen species (ROS), further oxidizing elements of the cells, including proteins, DNA, and membrane lipids, directly damaging the myocardium. Suchal et al. also reported that antioxidant enzyme levels were significantly reduced, while MDA levels were elevated in ISO treated rats (15). Our further study indicates that different doses of CORT could prevent the increased levels of serum MDA in rats induced by ISO, suggesting that inhibition of CORT on myocardial injury caused by ISO was associated with reducing lipid peroxidation. However, this underlying mechanism remains to be further studied.

A wealth of evidence has convincingly demonstrated that ERS plays a crucial role in the development of the cardiovascular disease, including myocardial infarction (21), myocardial ischemia/reperfusion (I/R) injury (22), heart failure, and other conditions (23). The endoplasmic reticulum (ER) is a dynamic organelle that is essential for maintaining cellular homeostasis. Under stressful situations, such as ischemia, hypoxia, oxidative stress, and changes of intracellular Ca2+ concentrations, the ER environment is compromised, which consequently leads to the accumulation of unfolded proteins, which is called ERS (24). In this study, we found that the expression classical ERS markers like GRP78, caspase-12, and CHOP protein in the myocardial tissue of the ISO group was significantly increased compared with the control group, while the expression of GRP78, caspase-12, and CHOP protein were significantly lower in the ISO + CORT group than those in ISO group, indicating that CORT might attenuate ISO-induced myocardial injury in rats by inhibiting ERS. It has been reported that ERS initiates its signaling pathways by activating 3 transmembrane effector proteins: protein kinase RNA-like ER kinase (PERK), inositol-requiring protein-1 (IRE-1), and activating transcription factor 6 (ATF6) (25), and thus participates in cardiovascular diseases. However, the regulating role of ERS signaling in the cardioprotection by CORT remains unclear and needs to be further elucidated.

Notably, some studies have shown that lipid oxidation products contribute to triggering ERS. In particular, ERS activation has been demonstrated in endothelial cells exposed to oxysterols and oxidized low-density lipoprotein (ox-LDL) (32,33). Proteins are much more susceptible to oxidative stress than fat and DNA (34). It has been confirmed that the activation of IRE1α, PERK, and ATF6 and the subsequent activation of CHOP, GRP78, and GRP94 are associated with ox-LDL treatment (35,36). It is worth mentioning that ox-LDL can also activate autophagy (36). Even so, the specific molecular interactions of ERS, autophagy, and lipid oxidation in CORT’s inhibition of myocardial injury induced by ISO remain to be further clarified.

In summary, the present study is first to demonstrate that CORT may attenuate acute myocardial injury in rats induced by ISO, which is likely mediated by CORT’s reduction of lipid peroxidation and inhibition of ERS and autophagy. These provide rational evidence for CORT as a novel target for the prevention and treatment of myocardial injury and its related diseases.

Ethical Statement: The authors are accountable for all aspects of the work in ensuring that questions related to the accuracy or integrity of any part of the work are appropriately investigated and resolved. Rats received humane care and all experimental protocols complied with Animal Management Rule of the People’s Republic of China (Ministry of Health, P. R. China, document no. 55,2001), and Animal Care Committee of Harbin Medical University Health Science Center.