Most patients with drug-susceptible tuberculosis (TB) are successfully treated using the standard six-month treatment regimen consisting of isoniazid, rifampin, ethambutol, and pyrazinamide, with a treatment success rate of 90–95% (1). Previous studies have shown that treatment outcomes can be suboptimal in patients with additional risk factors, such as the following: being >10% below ideal body weight; being an active smoker; and having diabetes mellitus, human immunodeficiency virus (HIV) infection, or signs of extensive disease observed on chest radiographs (2-7).

Besides the above factors, the most well-known risk factors for unfavorable treatment outcomes are cavitation on chest radiograph (3) and positive culture 2 months post-treatment initiation (hereafter positive culture at month 2) (3,8). In patients treated for six months, having both cavitation and positive culture after a two-month treatment is associated with an approximately 20% recurrence rate (7-9). Accordingly, the current guidelines have proposed extending the continuation phase of treatment with isoniazid and rifampin for an additional three months in these patients, corresponding to a total of nine months of therapy. It is also recommended to consider extending the continuation phase in patients with cavitation only (7).However, there is limited treatment outcome data available to support this recommendation.

Accordingly, we aimed to investigate the treatment outcomes in patients with drug-susceptible cavitary pulmonary TB who received treatment with an extended continuation phase.

We included all consecutive adult patients (age ≥18 years) with newly diagnosed or retreated drug-susceptible cavitary TB at Hallym University Kangnam Sacred Heart Hospital (a 577-bed referral hospital in Seoul, South Korea) between January 2012 and June 2017. During the study period, 1,288 patients were diagnosed with pulmonary TB, while 97 (7.5%) were diagnosed with cavitary pulmonary TB. After excluding patients with no available two-month sputum culture results (n=22), those initially diagnosed with multidrug-resistant TB (MDR-TB) (n=4), and those with ongoing treatment (n=4), 67 patients were included (Figure 1). Before commencing TB treatment, the attending physicians determined the baseline comorbidities. The study protocol was approved by the Institutional Review Board (IRB) of Hallym University Kangnam Sacred Heart Hospital (IRB application no. 2018-07-007). All data were anonymized before analysis and the need for written informed consent was waived by the IRB due to the retrospective nature of this study.

Acid-fast bacilli (AFB) staining was performed on sputum samples with an auramine-rhodamine fluorescent stain, followed by confirmation with Ziehl-Neelsen-staining. Staining results were graded according to the American Thoracic Society/Centers for Disease Control and Prevention guidelines (10). Specimens in which the AFB smear results were categorized as grades ≥1+ were defined as smear positive. All clinical specimens were cultured on both solid and liquid media for six weeks. To this end, decontaminated samples were inoculated into mycobacterial growth indicator tubes (MGIT 960 system; Becton Dickinson, Sparks, MD) and 3% Ogawa agar (Shinyang, Seoul, Korea). All positive cultures were subjected to an AFB smear to confirm the presence of AFB and exclude contamination. Pulmonary TB was diagnosed based on sputum AFB smear or Mycobacterium tuberculosis (MTB) polymerase chain reaction (PCR) results. The PowerChek MTB/NTM Real-time PCR Kit (Kogene Biotech, Korea) was used to analyze sputum samples. Drug susceptibility testing (DST) was performed using the absolute concentration method with the Lowenstein-Jensen medium at the Korean Institute of Tuberculosis (11). Follow-up sputum AFB smear and culture were performed monthly. All the procedures were performed in Class 2 biosafety cabinets.

Data are presented as the median and interquartile range (IQR) for continuous variables and as frequency (percentage) for categorical variables. Data were compared by the Mann-Whitney U test for continuous variables and by Pearson’s chi-square test or Fisher’s exact test for categorical variables. To evaluate the effect of a positive culture on the treatment outcomes at month 2, multivariable logistic regression analysis was performed after adjusting for age, sex, body mass index, cavity size, bilateral lung infiltrates, and treatment duration. All tests were two-sided, and P values of <0.05 were considered statistically significant differences. All statistical analyses were performed using IBM SPSS Statistics for Windows (version 23; IBM Corp., Armonk, NY, USA) and STATA (version 14; Stata Corp., College Station, TX). 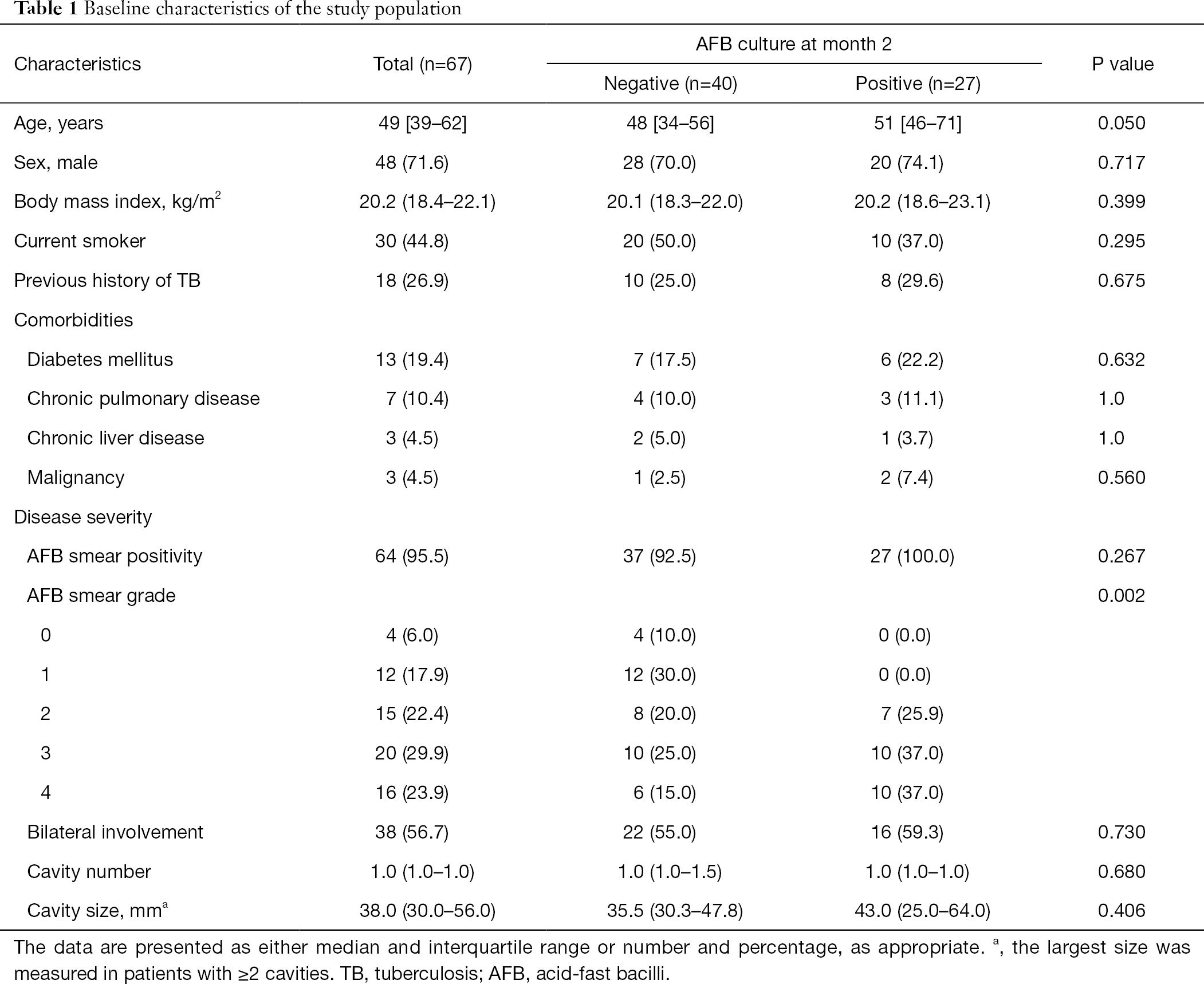 Treatment regimen and duration for patients with drug-susceptible cavitary TB are summarized in Table 2. A standard anti-TB medication regimen was initiated in all patients, which consisted of rifampin, isoniazid, ethambutol, and pyrazinamide. Second line anti-TB medications were used in some patients who had experienced side effects of standard medications, which included a fluoroquinolone in five (7.5%) patients (levofloxacin in three and moxifloxacin in two), injectable drugs in two (3.0%) (streptomycin in one and streptomycin followed by kanamycin in the other), and cycloserine in one (1.5%). There were no significant differences in TB treatment regimen between the patients regardless of culture conversion at month 2 after treatment initiation. 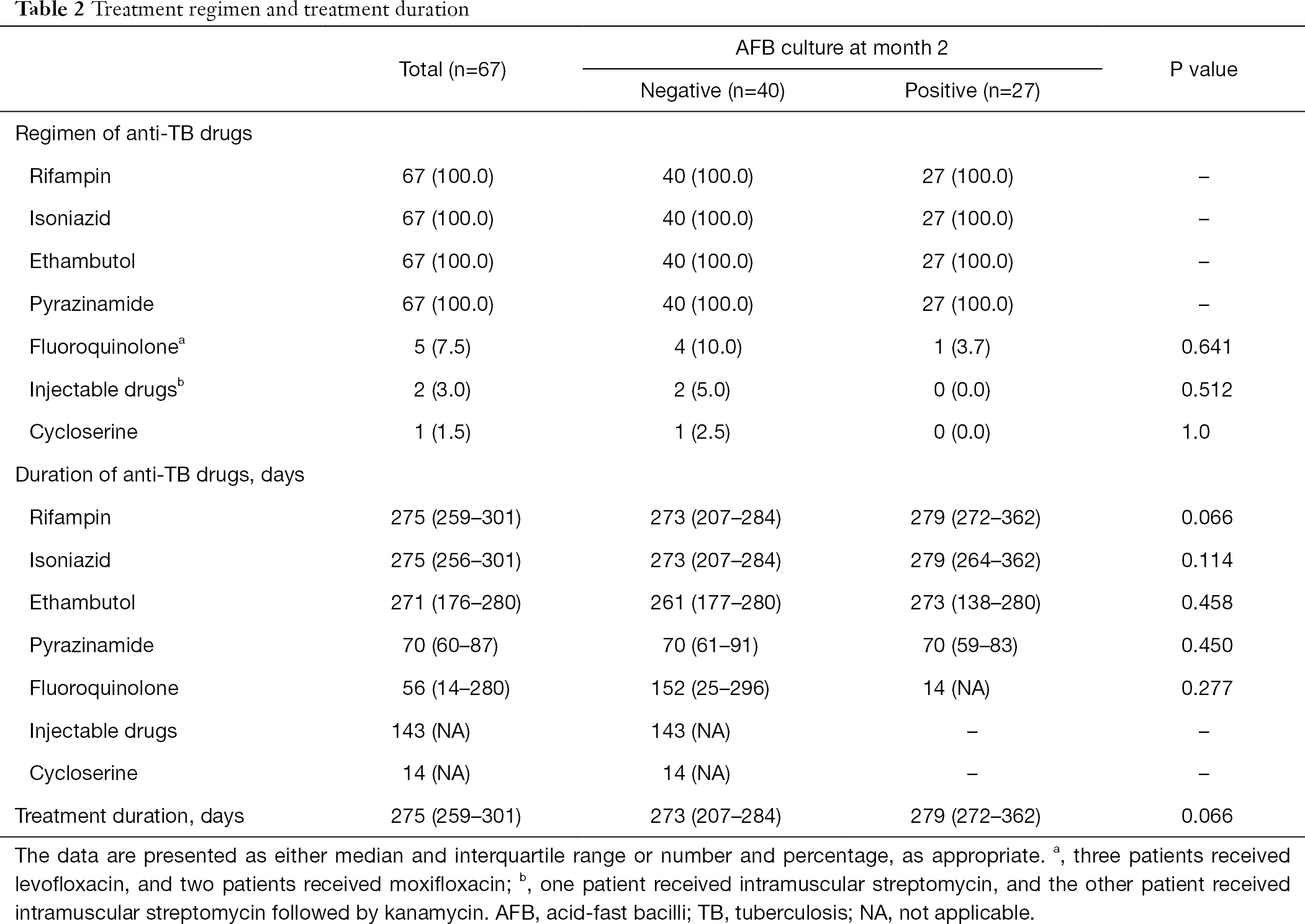 Patients were treated with rifampin, isoniazid, and ethambutol for approximately nine months, and pyrazinamide for approximately two months. Although patients with positive culture at month 2 were more likely to be treated for a longer duration, and receive rifampin for a longer duration than in those with negative culture at month 2, these differences were not significant (P=0.066, both for overall treatment duration and duration of rifampin use). 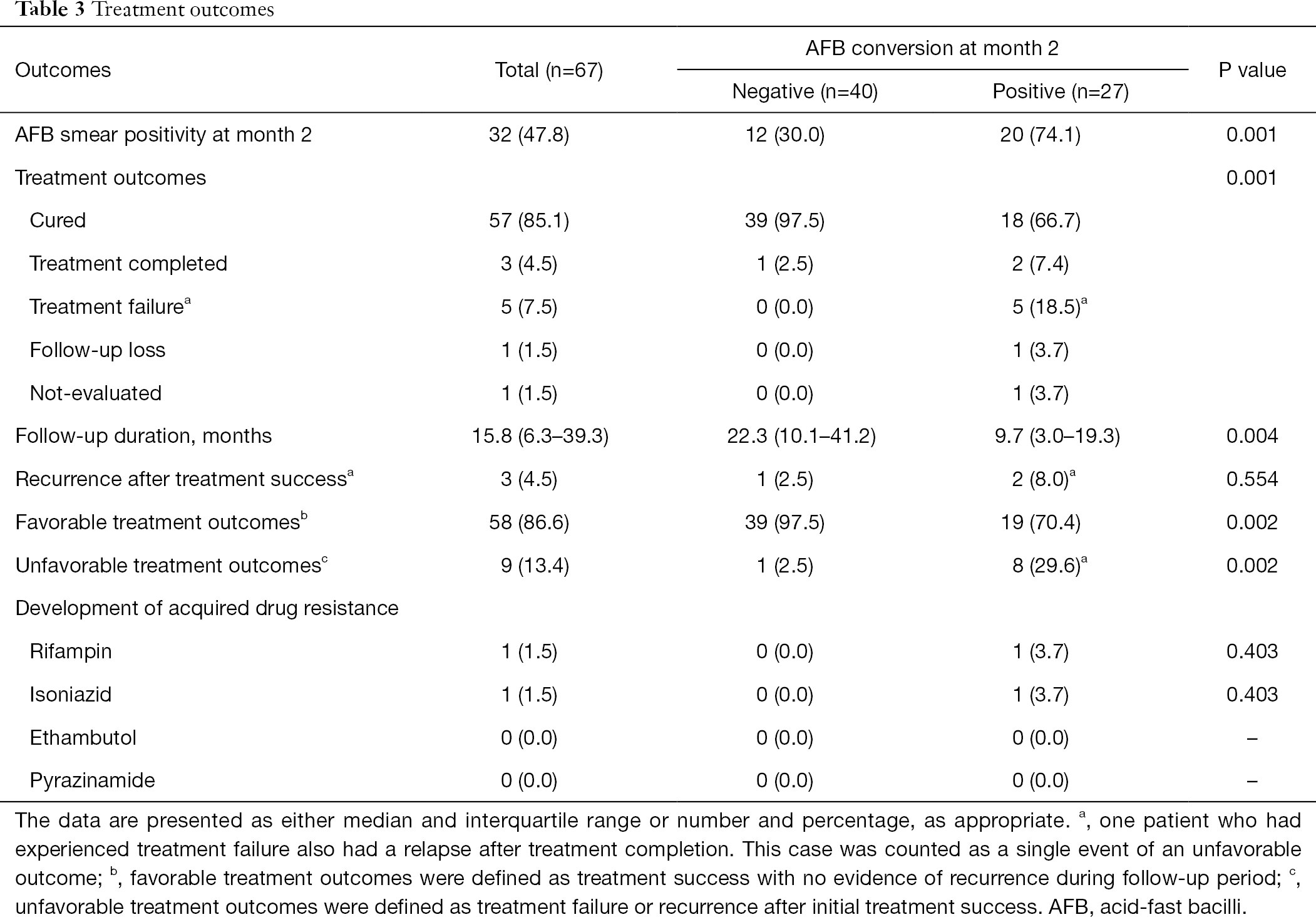 The effect of positive culture at month 2 on treatment outcomes

Clinical characteristics and treatment regimens of five patients with initial treatment failure are provided in Supplementary Table S1. DST performed using M. tuberculosis grown on month 4 sputum cultures did not reveal any new drug resistance. After detecting treatment failure, all five patients received a treatment regimen composed of isoniazid and rifampin with or without ethambutol, which was the standard continuation phase regimen. Three patients achieved culture conversion after extending the duration of therapy, one patient developed MDR-TB at 5.5 months after treatment initiation, and one patient was lost to follow-up 5.8 months after culture conversion, which was achieved 8.7 months from treatment initiation. Of the three patients who had achieved treatment success after prolonged treatment, recurrence was observed in one patient 37.7 months after treatment completion. 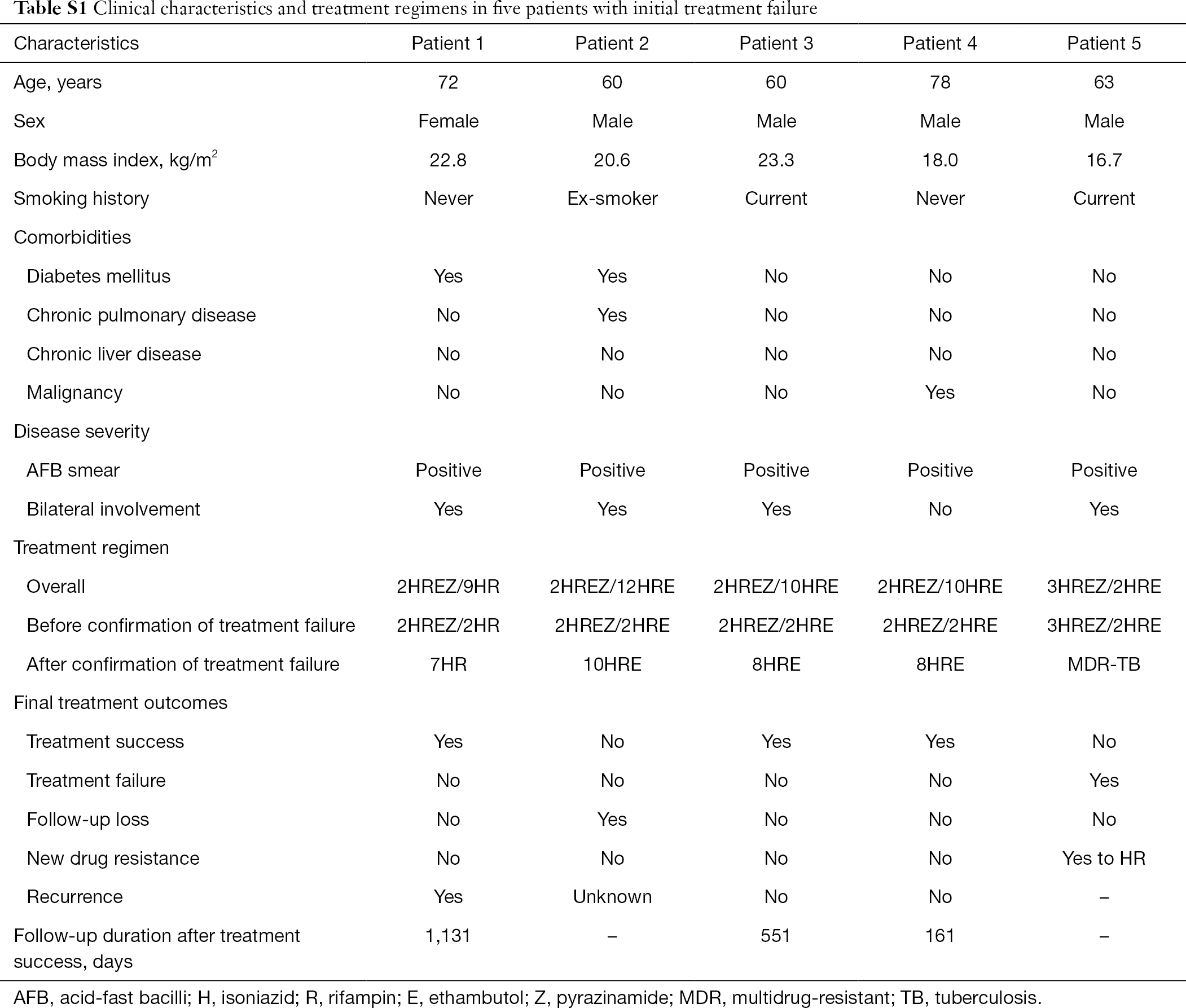 Several studies using qualitative smears and cultures have shown that patients with cavitary TB have higher mycobacterial loads in their sputum (16-20), which may result in a high recurrence rate, ranging up to 20% in cavitary TB patients, especially in those with a positive culture at month 2 (7-9). These study results suggest that the current six-month standard therapy is not an adequate treatment duration for cavitary pulmonary TB despite drug-susceptibility. Thus, the current treatment guidelines recommend extending the continuation phase therapy for three months in cavitary TB patients with a positive culture at month 2, and considering an extended continuation phase therapy in TB patients with only cavitation (7). However, there have been insufficient data to support this recommendation.

From this perspective, our study provided informative data about the treatment outcomes of an extended treatment regimen in these patients. Supporting the current expert recommendation, the recurrence rate after extended treatment was about 4.6% (2.5% in patients with a negative culture at month 2 and 8.0% in patients with a positive culture at month 2) in this study, which is lower than the previous results (ranging up to 20%) in patients who received a six-month treatment (8). The factors related to recurrence including age, underlying comorbidities, and disease severity in this study were comparable with those of the previous study conducted by Jo and colleagues (8). Moreover, a recent meta-analysis reported that the subgroup of patients with both cavitation and positive 2-month smear positivity had shown a relapse risk of at least 10% (21). Thus, the extended treatment duration may have a significant role in decreasing the recurrence rate. In addition, the Korean Government public-private mix collaboration policy (explained in the Methods section in detail) (14,15), which has been settled since 2011, may have an additional role in decreasing the recurrence rate by enhancing medication adherence.

In this study, five patients among those with positive culture at month 2 experienced treatment failure, defined as persistently positive culture results after four months of treatment (7,12). Although maintaining the continuation phase therapy led to culture conversion in three patients, one patient was lost to follow-up, and one patient acquired MDR-TB. Some researchers have raised concerns that lengthy TB treatment might increase the development of drug resistance (26,27). Supporting this perspective, one fifth developed MDR-TB during extended treatment for cavitary TB in this study. Thus, although it could be postulated that extending the continuation phase therapy might be helpful to reduce the recurrence rate, we should be careful not to facilitate the development of MDR-TB. We believe that reinforced 2-month intensive phase regimen may shorten the treatment duration as well as prevent the development of drug resistance in patients with unfavorable outcomes. Future research highlighting new regimens is needed to overcome the drug resistance issue.

Our results, along with the findings of previous studies, strongly suggest that an augmented treatment regimen may be needed for the treatment of cavitary pulmonary TB in patients with positive culture at month 2. Considering the poor penetration of first line oral anti-TB drugs in cavitary lesions (28-30), augmentation of the treatment regimen with second line drugs such as moxifloxacin may be helpful (29). A previous study using an animal model revealed that moxifloxacin showed a high tissue-plasma ratio of distribution in cavitary lesions (nine in cavity caseum and 16 in the cavity wall), while tissue-plasma ratios of isoniazid, rifampin, and pyrazinamide were relatively unsatisfactory (29). In addition, a recently published article by Strydom and colleagues investigated TB drugs’ distribution in the patient’s lung lesions and suggested a mechanistic model for regimen and dose optimization (31). We may incorporate such a promising tool into practice, which will lead to more tailored regimen to overcome subtherapeutic drug concentrations in cavities.

This study has several limitations. First, it was a retrospective study with a relatively small sample size from a single referral hospital. For example, cavity size was larger in patients with a positive culture at month 2 than in those with a negative culture at month 2, which might have resulted in culture positivity at month 2 and hence treatment failure. However, the difference in cavity size was not statistically significant, probably due to the small sample size. Second, because genotyping was not available, this study could not discriminate relapse due to reactivation from recurrence due to exogenous reinfection (32). Third, although there was no significant difference in the recurrence rate between patients with positive and negative culture at month 2, the statistical insignificance may be due to the relatively small study population. However, this limitation does not change our study findings regarding the potential role of an extended continuation regimen. Studies with a larger number of patients are needed to confirm these findings.

Funding: This research was supported by Basic Science Research Program through the National Research Foundation of Korea (NRF) funded by the Ministry of Science, Information and Communications Technologies (NRF-2019R1G1A1008692).

Ethical Statement: The authors are accountable for all aspects of the work in ensuring that questions related to the accuracy or integrity of any part of the work are appropriately investigated and resolved. The study protocol was approved by the Institutional Review Board (IRB) of Hallym University Kangnam Sacred Heart Hospital (IRB application no. 2018-07-007).