Gastric cancer (GC) is the fourth most frequently diagnosed cancer in the world (1). In China, almost 80% of patients are diagnosed with advanced GC due to inadequate early diagnosis, and in contrast, the rates for patients in Japan and South Korea are <50% (2,3). For metastatic or recurrent GC, palliative chemotherapy is still the main treatment choice (4).

To date, several prognostic indicators have been reported to be associated with survival in metastatic or recurrent GC patients. Eastern Cooperative Oncology Group performance status (ECOG PS) is commonly used by physicians and nurses in oncology as it is regarded as an important prognostic factor for assessing treatment response and outcomes in cancer patients (5,6). However, some cancer patients with good PS (0–1) status have poor prognosis clinically (7-9). Therefore, patients with good PS status might have some specific prognostic factors. To our knowledge, few studies have analyzed the prognostic parameters among this subset of cancer patients (7,8,10,11). Although a model for the prognoses of patients with metastatic or recurrent GC and good PS who undergo chemotherapy as a first-line treatment has been modified before (7), some issues still need to be solved. Firstly, some important host- or tumor-related prognostic factors, such as coagulation markers and tumor biomarkers, that have been proved in the recent studies were not included in the previous prognostic model (12-15). Secondly, there is no validation procedure in the previous prognostic model (7). Thirdly, the previous prognostic models lacked the feature of integrating multiple putative prognostic factors into a single numerical evaluation (7,16-19). A points-based nomogram that differs from the traditional prognostic models could be an efficient tool by combining the prognostic factors that estimate survival probability tailored to individual patients (20).

We herein described the development, both internally and externally, of a nomogram to inform overall survival (OS) predictions for metastatic or recurrent GC patients with good performance status receiving first-line chemotherapy.

A retrospective cohort study was conducted on GC patients with good PS who received first-line palliative chemotherapy at the First Hospital of China Medical University. The inclusion criteria of patients were as follows: (I) aged ≥18 years, (II) histologically confirmed diagnosis of GC, (III) with at least one measurable or evaluable lesion, (IV) who underwent at least one cycle of chemotherapy, (V) with PS 0–1, (VI) no clinical evidence of infection or other inflammatory conditions, and (VII) access to clinicopathological data at the beginning of chemotherapy. Those with esophageal cancer, squamous cell carcinomas, or gastroesophageal junction tumors were not eligible for inclusion. The study was in line with the Helsinki Declaration and approved by the Ethics Committee at the First Hospital of China Medical University (No. AF-SOP-07-1.1-01). All patients have signed the informed consent form.

The flow chart for patient selection was shown in Figure 1. At random, a total of 309 patients (from April 2007 to December 2013) were split into 2 cohorts, a training cohort (n=259) and an independent internal validation cohort (n=50), at a 4:1 ratio. An independent cohort with similar criteria for inclusion was used to validate our model, with subjects prospectively recruited between January 2014 and October 2016 (n=147, the external validation cohort). The primary endpoint was OS, which was defined as the time from metastasis until death or the time of their ultimate follow-up visit. 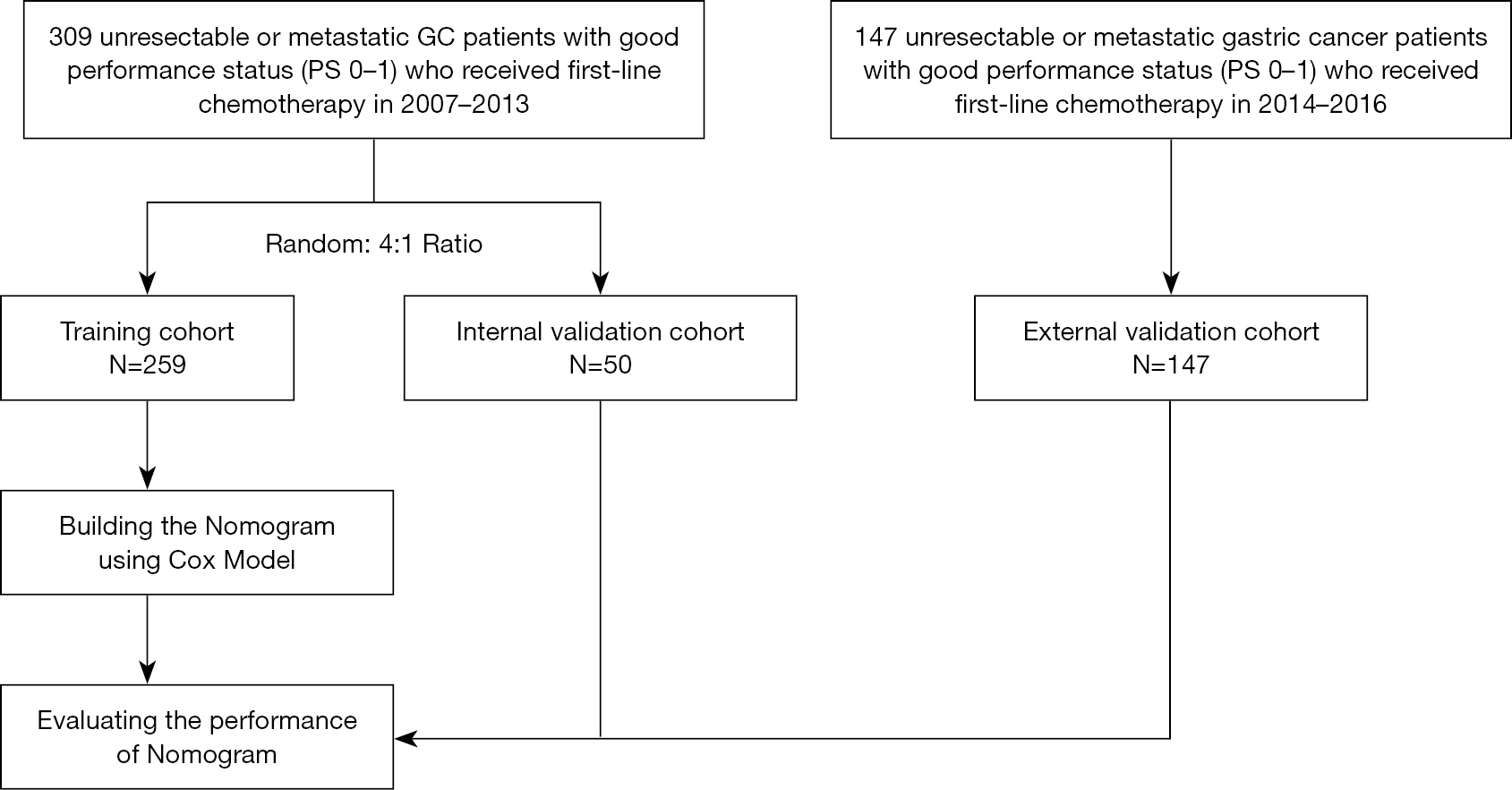 For developing a nomogram, univariate analyses of every clinicopathological variable were performed by way of a Cox proportional hazards regression model. The variables that achieved a significant level of P<0.2 were entered into multivariate analyses for screening as independent risk factors via the Cox model with forwarding stepwise procedures. Based on all independent prognostic factors, a nomogram was constructed to allow for a visualized estimate of individual OS probability after 1 year.

Nomogram validation included 3 activities: firstly, 1,000 bootstrap replications were developed to estimate the Harrell’s concordance index (c-index) in both pieces of training as well as validation cohorts (21). Secondly, to carry out calibration, we plotted the observed vs. predicted OS probabilities after one year, grouping all patients in the training and validation cohorts. Thirdly, the value of the nomogram with respect to competing benefits and problems was estimated using decision curve analysis (DCA).

Categorical variables were presented in the form of numbers and percentages. We recorded laboratory variables as continuous variables and presented them as mean ± SD. The cut-off values for continuous variables were determined based on the normal value range. The clinicopathological parameters among the training cohort and the validation cohorts were analyzed using a Chi-square test or Fisher’s exact test. We then conducted Cox regression analyses to evaluate independent prognostic factors in the training cohort. Statistical significance was considered to exist when P value <0.05, and all P values corresponded to significance tests (two-tailed). A receiver operating characteristic (ROC) curve analysis was carried out to calculate the area under the curve (AUC). SPSS 17.0 software package (SPSS, Chicago, IL) and R software, version 3.3.1 (http://www.r-project.org), facilitated the statistical analyses. 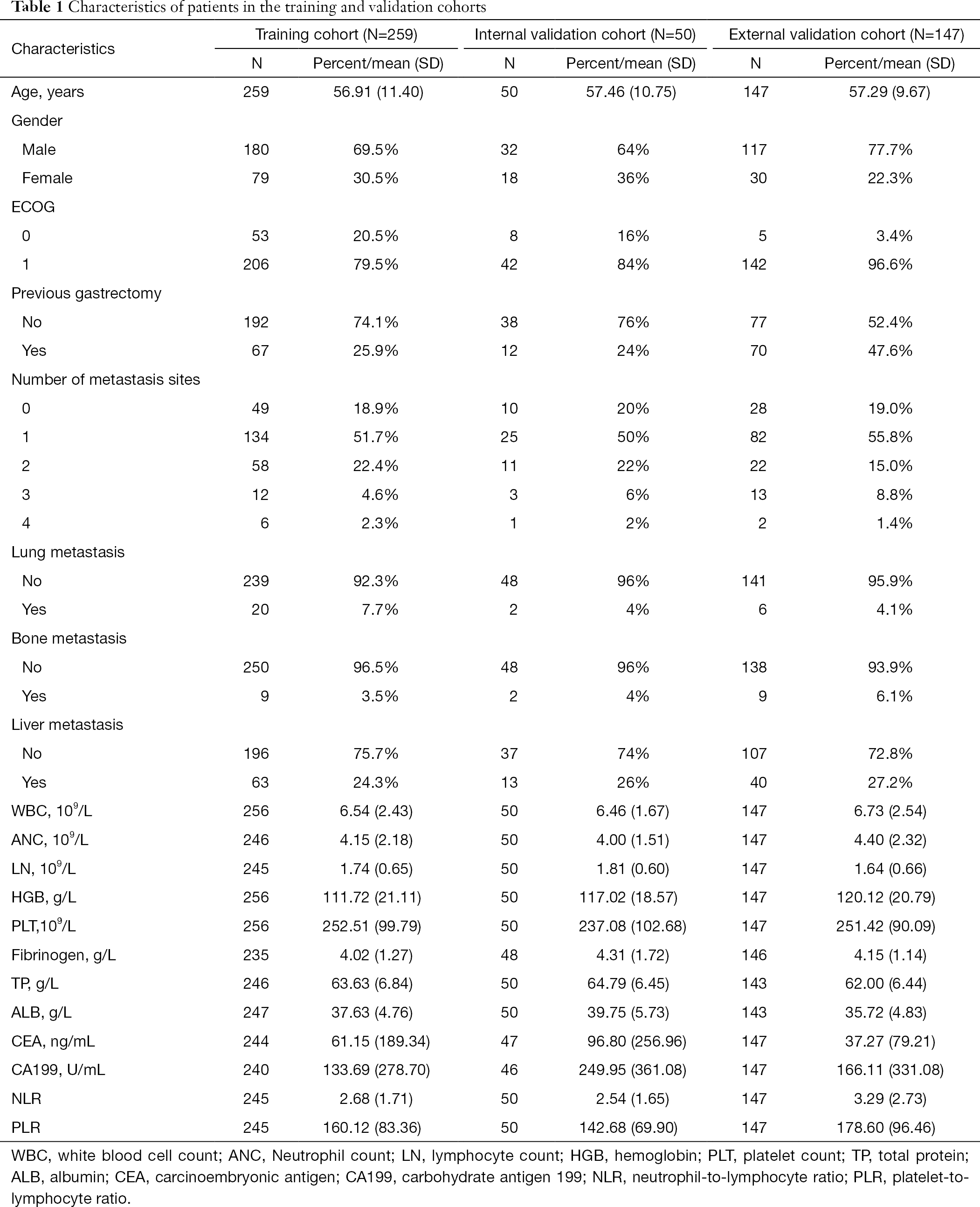 Twenty clinicopathological variables were associated with OS in univariate analysis (Table 2). Subsequently, a multivariate Cox proportional hazards regression model was used in the training cohort (Table 3). Three covariates showed a significant correlation with survival: number of metastatic sites, fibrinogen, and CA199. Next, a prognostic nomogram was developed as shown in Figure 2, in which points were given based on the score of each variable of an individual patient by locating the corresponding scale of the variable. The total values were then summed up, and then a vertical line was drawn through the survival scales that provided the probability for 1-year OS. With the training cohort, the nomogram attained a bootstrap-corrected concordance index (c-index) of 0.623 (95% CI, 0.58–0.67) (Figure 3A). Decision curve analysis (DCA) showed that if the threshold probability was >0.6, the developed nomogram was considered superior in predicting OS in all of the patients’ dead scheme or none of the patients’ dead scheme (Figure 3B). The ROC curve for predicting the OS showed a higher AUC (0.756) than the previous model (0.670) (Figure 3C). 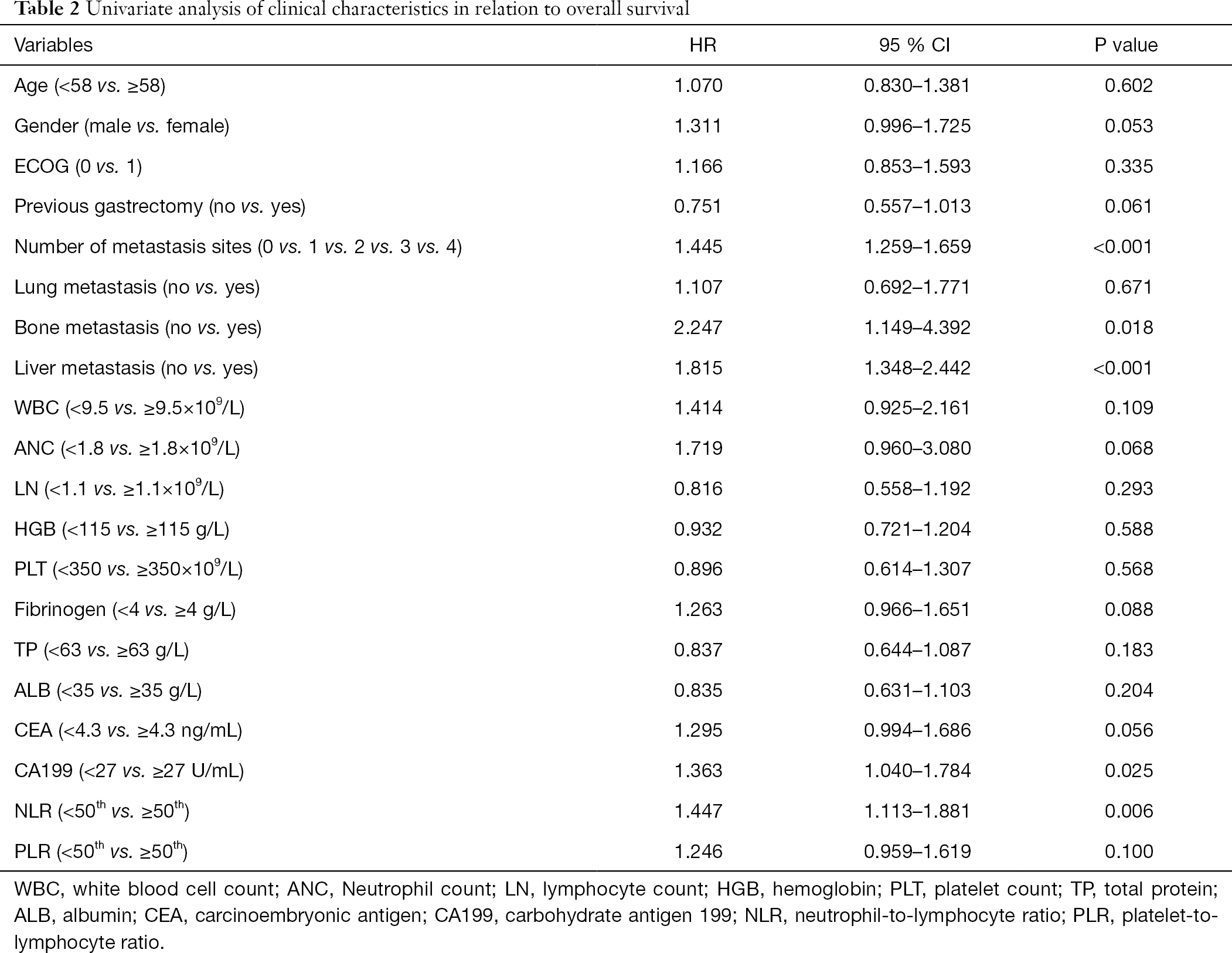 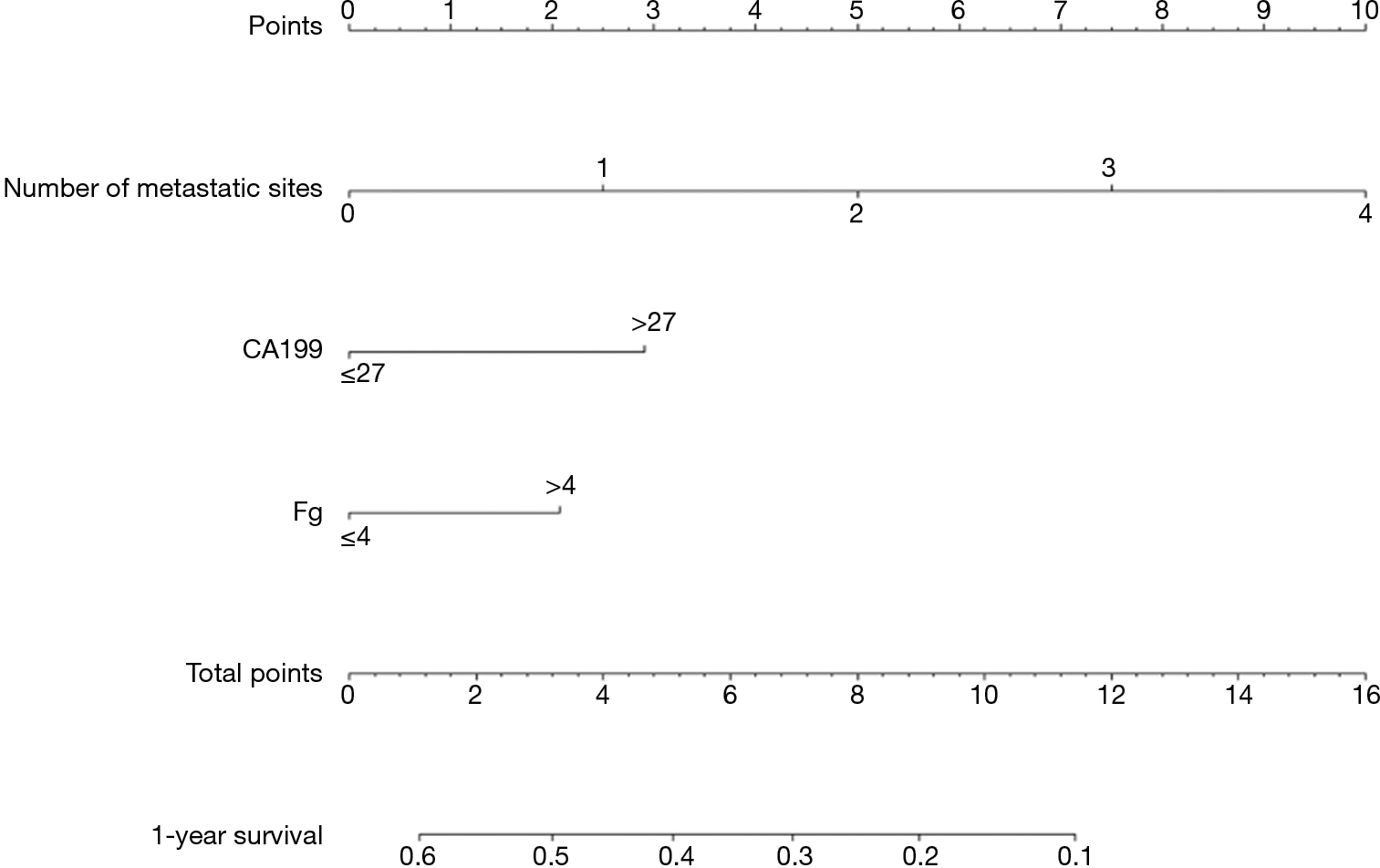 Figure 2 Nomogram is predicting 1-year overall survival in patients who had unresectable or metastatic GC and good performance status who underwent first-line chemotherapy. 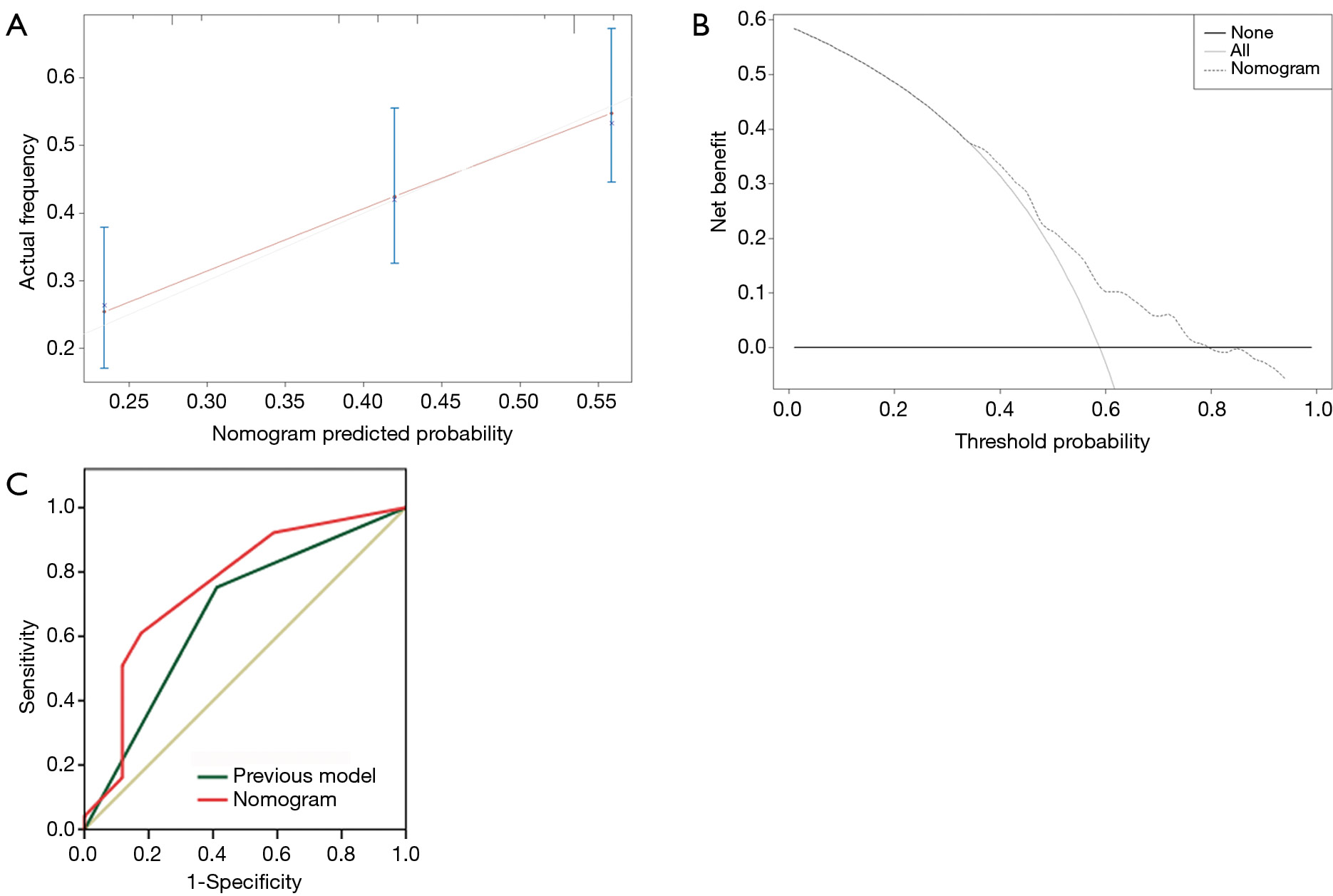 Figure 3 Evaluation of the nomogram in the training cohort. (A)The calibration plot was showing patient survival predictions after 1 year with a 95% confidence interval by decile (y-axis) overpredicted risk probability (x-axis) in the training cohort. A dashed line corresponds to a 10% margin of error. (B) The decision curve analysis (DCA) of the nomogram. (C) The ROC curves by nomogram and the previous model.

Validation of the nomogram

According to the nomograms in metastatic or recurrent GC patients who received first-line chemotherapy, only two studies have been reported (22,23). However, there are some limitations still to address. The selection process for patients who underwent analysis in the previous nomograms, for example, was too indiscriminate, and patients with esophageal adenocarcinoma were included (23). In addition, some host inflammatory factors and tumor biomarkers that are prognostic clinicopathological factors were not involved in the nomograms analysis (22,23). To our knowledge, no nomogram is available that includes host inflammatory factors, coagulation index, and tumor biomarkers for patients with metastatic or recurrent GC who have good PS and have received first-line chemotherapy.

The nomogram for individualized risk prediction could provide physicians as well as patients with a general outlook on prognosis from when GC is diagnosed (23). The final nomogram of our study consisted of three parameters, which included the number of metastatic sites, fibrinogen, and CA199. The number of metastatic sites, as a well-known factor, exhibited a significant negative prognostic effect in metastatic GC (24,25). The patients with tumors were always in a hypercoagulable state, and thus coagulation index has been put forward as a key marker for the prognosis of different forms of cancer, including GC. Emerging evidence has indicated that a high level of plasma fibrinogen showed a significant association with poor OS in GC patients (12,13). Our study for the first time, included fibrinogen in the development of a nomogram for metastatic GC. Fibrinogen acts as a scaffold molecule that affects the progression and metastasis of tumor cell growth and sustains the cellular responses of adhesion in different malignancies (26). Fibrinogen facilitates platelet adhesion in tumor cells, thereby protecting the tumor cells from escaping from the cytotoxicity of natural killer cells (27). Moreover, fibrinogen assessment might have implications for therapeutic optimization (27). According to a previous case report, systemic chemotherapy has successfully controlled the disseminated intravascular coagulation that is associated with advanced GC (28). The etiology and its contribution to therapeutic optimization still warranted further evaluation. Tumor markers that are easily obtained from the serum before chemotherapy was also evaluated in this study. Our nomogram showed CA199 as one of the independent risk factors. In recent studies, elevated serum CA199 was illustrated as an independent inferior prognostic factor in patients with metastatic GC (14,15). The mechanism as to why CA199 affects the prognosis of patients with metastatic GC remains unclear. The reasons for the effects of CA199 were due to its role in intercellular adhesion and in cells that express this surface glycoprotein, which subsequently resulted in tumor metastasis and invasive potential (29).

When considering the generalizability of the nomogram, there are some potential limitations that should be taken into account. First, we conducted the study retrospectively and designed it with a small population and a shorter duration of mean follow-up time. More patients are needed in both the training and validation cohorts. Secondly, the impact of subsequent lines of chemotherapy on the length of survival was not taken into account with our nomogram. Third, the human epidermal growth factor receptor 2 (HER2) status was not described in this study. Because the patients enrolled in the training cohort were from 2007 to 2013, and the HER2 status test in patients with metastatic GC was not a routine examination in the early years, especially before 2010, when Trastuzumab for Gastric Cancer (ToGA) study reported (30). Despite these limitations, it is worth noting that our nomogram had moderate discrimination ability for OS (c-index of 0.623 in the training cohort and 0.638 in the external validation cohort) and the calibration plots at 1 year were also good in all the cohorts.

In conclusion, a reliable nomogram was developed and validated to predict the OS of patients who had unresectable or metastatic GC and a good PS who underwent first-line chemotherapy. The developed nomogram has great potential for application in clinical practice for estimating the mortality risk in treating GC patients individually.

Ethical Statement: The authors are accountable for all aspects of the work in ensuring that questions related to the accuracy or integrity of any part of the work are appropriately investigated and resolved. The study was in line with the Helsinki Declaration and approved by the Ethics Committee at the First Hospital of China Medical University (No.AF-SOP-07-1.1-01). Informed consent was obtained from the patients or their relatives.