As culture-dependent methods are insensitive and inadequate to study the entire microbial community, high-throughput sequencing technology has proved to be a more effective means for investigating microbial diversity over the past decade. While variations in gut microbiota during the perioperative period in liver transplant recipients have been studied. Surgery and the application of postoperative antibiotics and immunosuppressive agents lead to intestinal microbial environment changes (7). No such information exists on bile microbiota of liver transplant recipients.

The patients enrolled in the study were liver transplant recipients treated at our center over the period from September 2015 to June 2017. The inclusion criteria consisted of post-liver transplantation patients ranging in age from 18–65 years that had signed informed consent forms. Exclusion criteria included: (I) clinical and pathological diagnosis of acute or chronic rejection, (II) imaging results showing biliary anastomotic stenosis post-liver transplantation, (III) clinical and pathological diagnosis of primary disease recurrence (virus hepatitis or tumor), (IV) invasive systemic infection and (V) antibiotic use within the prior one-month period.

This study was approved by ethics committee in Beijing Friendship Hospital. Written informed consent was obtained from participants. No organs from executed prisoners were used in this study.

Definition of the patient groups

Samples were treated using a mini-bead beater (Biospec Products, Bartlesville, OK, USA) and DNA was extracted using a QIAamp DNA Mini Kit (Qiagen, Hilden, Germany). The DNA extracts were stored at −80 °C until use. The concentration of DNA was determined spectrophotometrically while agar gel electrophoresis was used to assess DNA integrity.

Raw fastq files were demultiplexed, quality-filtered by Trimmomatic and merged by FLASH with the following criteria: (I) reads were truncated at any site receiving an average quality score <20 over a 50 base pairs (bp) sliding window, (II) primers were exactly matched allowing 2 nucleotide mismatching, while reads containing ambiguous bases were removed and (III) sequences whose overlap was longer than 10 bp were merged according to their overlap sequence.

Operational taxonomy units (OTUs) were clustered with a 97% similarity cutoff using UPARSE (version 7.1, http://drive5.com/uparse/) and chimeric sequences were identified and removed using UCHIME. The taxonomy of each 16S rRNA gene sequence was analyzed by RDP Classifier (http://rdp.cme.msu.edu/) against the Silva (SSU115) 16S rRNA database using a confidence threshold of 70%.

Species diversity was evaluated with use of Shannon, Simpson, Chao, and Ace indices. Calculations of principal coordinates analysis (PCoA) were performed by Hellinger distance, Bray-curtis distance and (un) weighted UniFrac distance. LDA Effect Size (LEfse) analysis was performed to identify species in which relative abundance was significantly different among the various populations. The Kyoto Encyclopedia of Genes and Genomes (KEGG) pathway was evaluated. A Wilcoxon rank-sum test was performed to evaluate differences between the two groups in alpha diversity, principle coordinates, and community difference analysis. A P<0.05 was required for results to be considered as statistically significant.

Patients of the control group (n=13) ranged in age from 39 to 62 years (mean ± SD =51.4±8.1 years) and consisted of 10 males and 3 females. These patients included 4 cases of hepatitis B cirrhosis, 4 cases of alcoholic cirrhosis, 2 cases of hepatitis C cirrhosis, 1 case of primary biliary cirrhosis (PBC), 1 case of primary sclerosing cholangitis (PSC) and 1 case of drug-induced liver injury. One bile specimen was collected from each patient, resulting in a total of 13 bile samples for analysis.

In order to reduce the impact of low-abundant OTU on subsequent statistical analysis, OTU with sequence numbers ≥5 in at least three samples and an OTU with a total number of retained sequences ≥20 were retained. The sequence data included ten bacterial phyla, subdivided into 65 families, 110 genera and 172 OTUs. According to the number of reads sampled and sobs index of OTU level, rarefaction curve of the two groups were plotted (Figure 1). In our study, the curves tended to be flat, which indicated that the reads number was relatively large enough to reflect species richness. 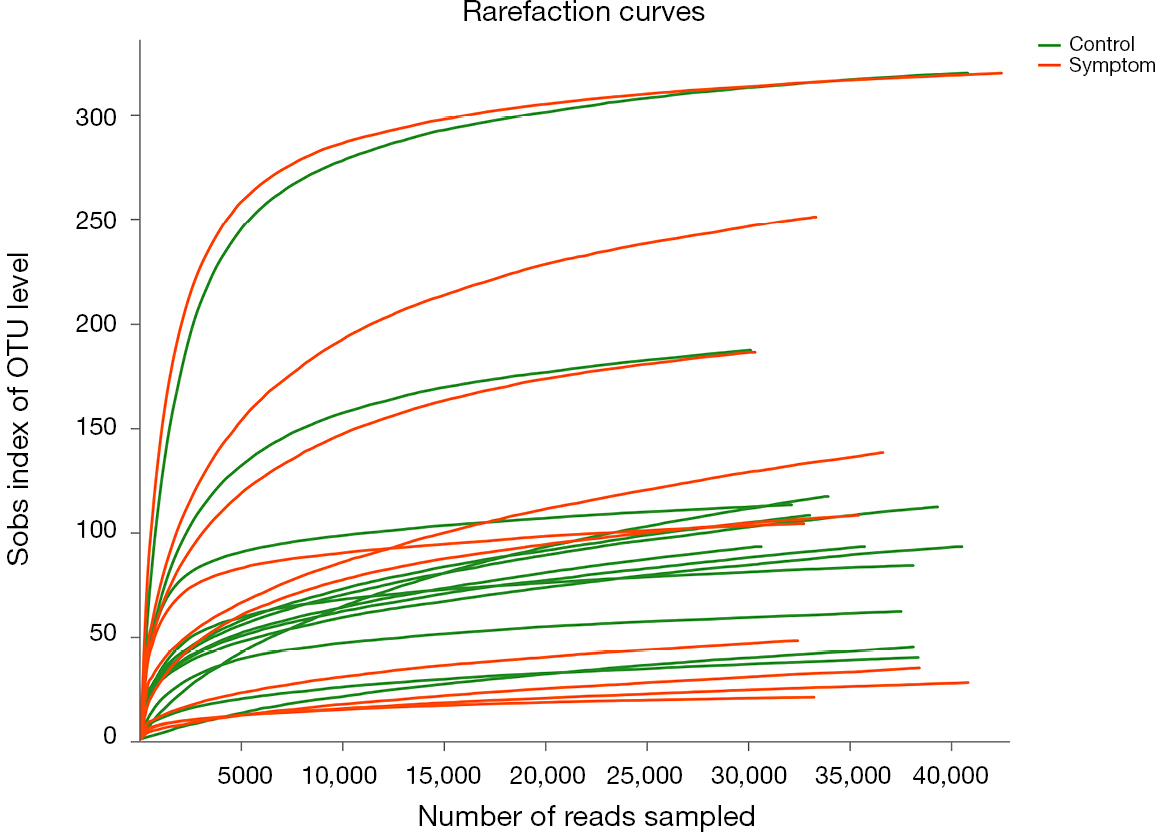 Distribution and abundance of bile microbiota

Figure 2 Distribution and abundance of bile microbiota in phylum level (others:abundance <1%). The main phyla in the symptom group were Proteobacteria, Firmicutes, Actinobacteria and Bacteroidetes. 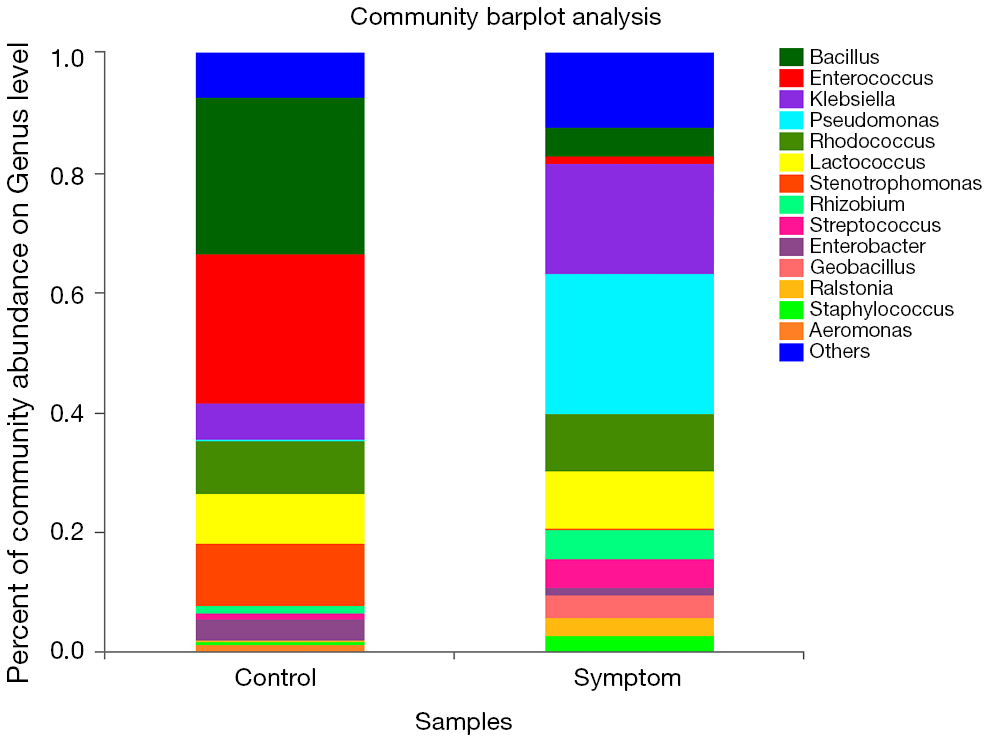 Figure 3 Distribution and abundance of bile microbiota at the genus level. The most common genera of the symptom group were Pseudomonas, Klebsiella, Lactococcus, Rhodococcus, Rhizobium, Bacillus and Streptococcus.

Alpha diversity provides a measure of species diversity within a sample. Shannon’s and Simpson’s are common indices for measures of species diversity including species richness and evenness. The greater the Shannon index, the higher the diversity, while an opposite relationship comprises the Simpson index. Chao and Ace are indices used to access species richness. The greater the value in these indices, the higher the diversity and richness of the microbial community. No statistically significant differences were obtained among all cohorts (P>0.05) as measured with these commonly used Shannon, Simpson, Chao and Ace indices (Figure 4). 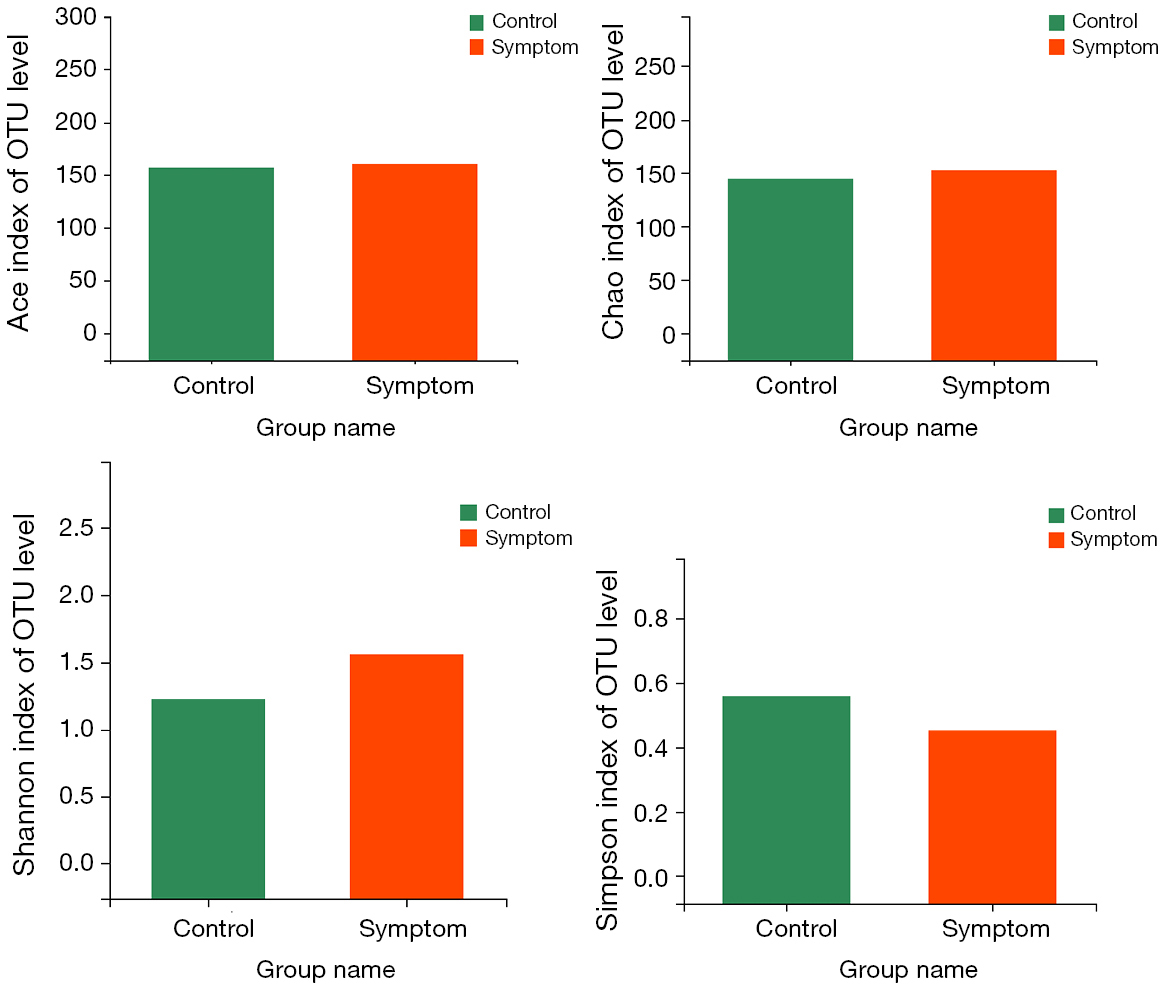 Figure 4 Alpha diversity analysis. No statistically significant differences were obtained among all cohorts (P>0.05) as measured with these common indices including the Ace, Chao, Shannon and Simpson. OTU, operational taxonomy unit.

PCoA is based on the OTU classified taxon data and involves analyzing the intrinsic composition of the microbial structure between the two groups. In our study, a number of methods were used to calculate the distance matrix, including the Hellinger, Bray-curtis and (un) weighted UniFrac. PCoA analysis of the four distances revealed that the two groups could not be completely discriminated (Figure 5). 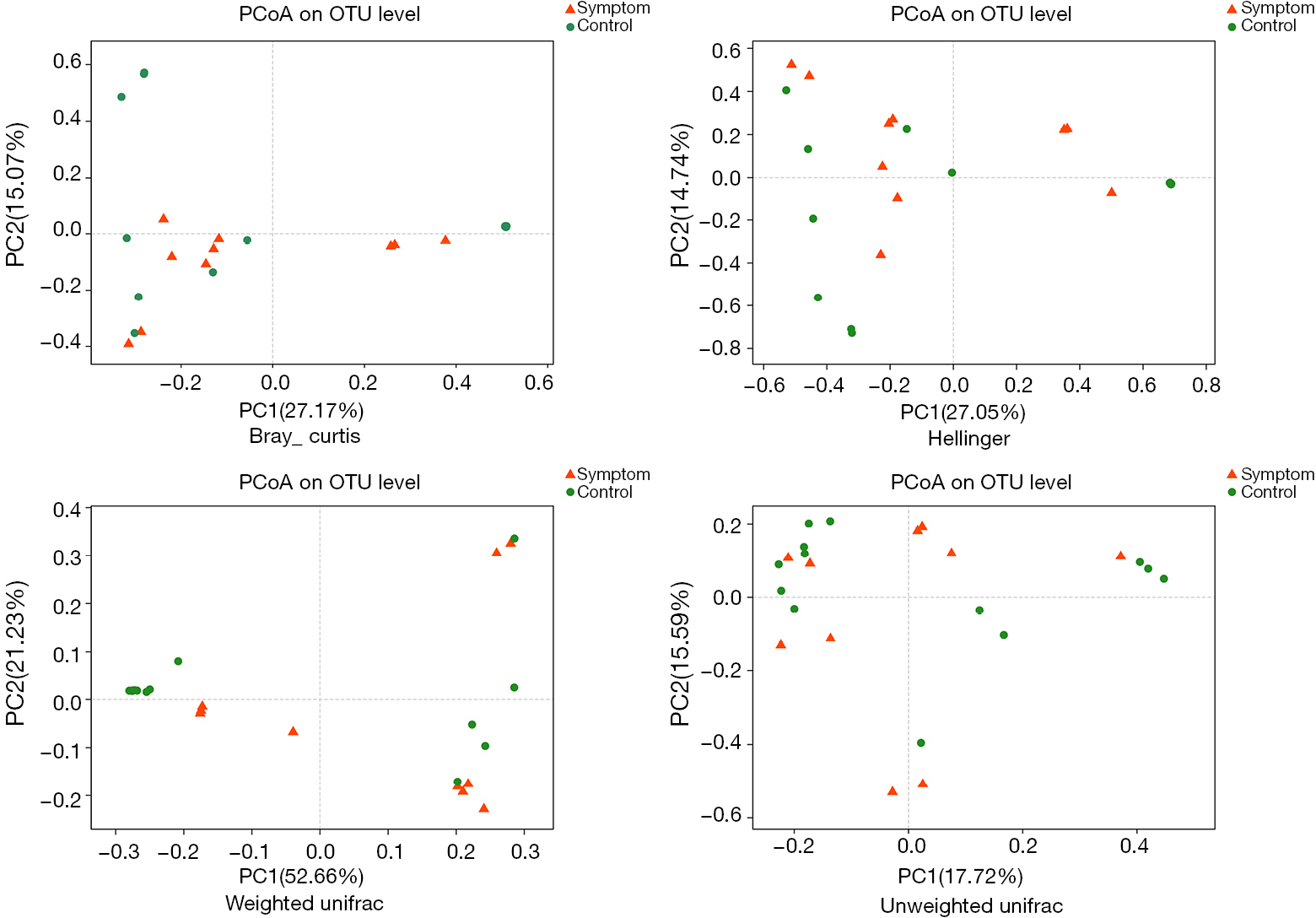 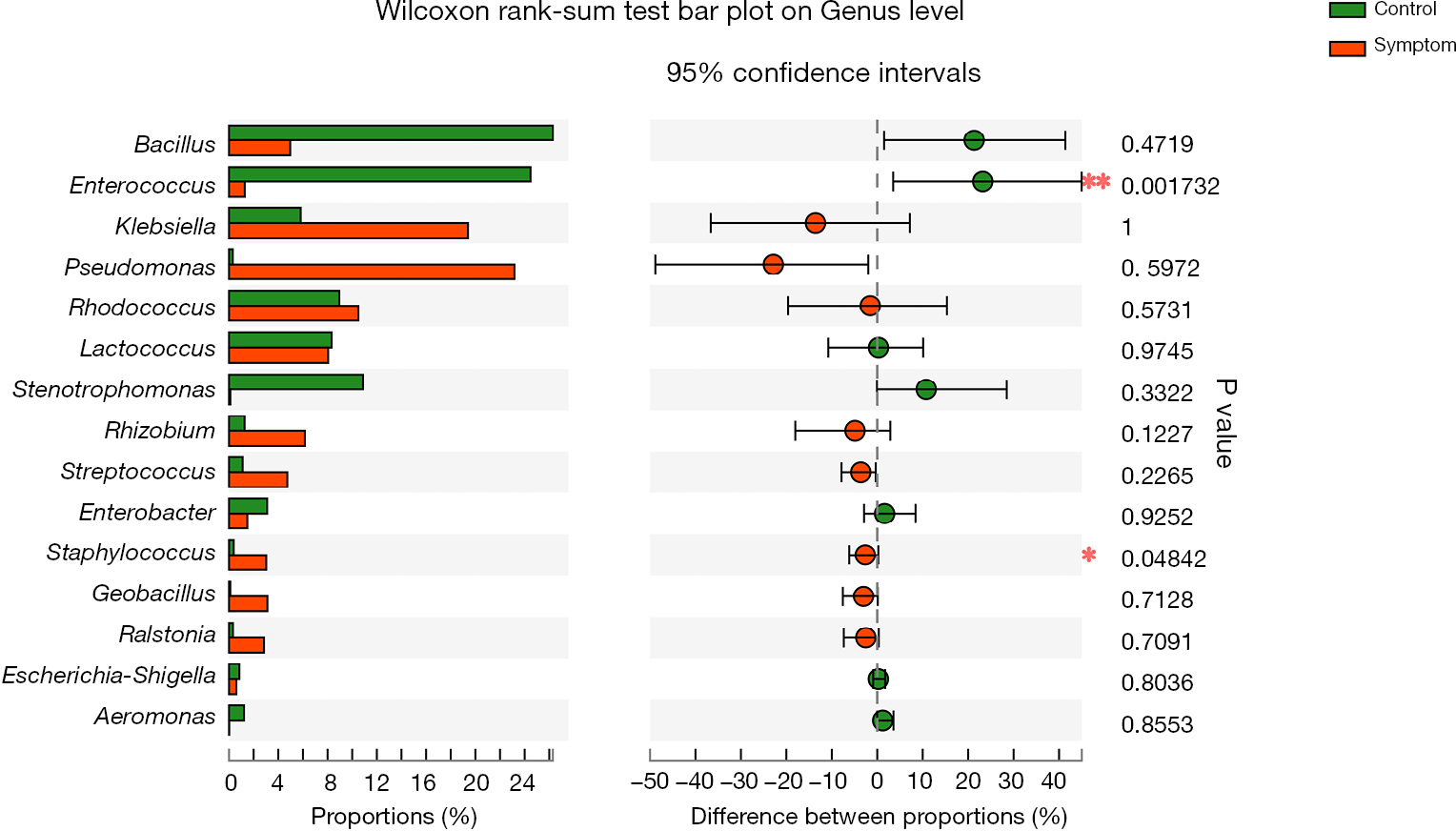 LEfSe analysis was used to detect differential abundances of species between the control and symptom groups. We identified differential distributions of species using the default cut-offs (LDA score >2.0; P value <0.05). The results showed that the relative abundances of Bacilli, Firmicutes, Enterococcaceae, Enterococcus, Planctomycetacia, Brevibacillus and Micrococcus were significantly decreased, while those of Proteobacteria, Bosea, Staphylococcus, Trichococcus, Ruminococcaceae-UCG-002, Epilithonimonas, Fusicatenibacter, Subdoligranulum, Lachnospiraceae-UCG-004, Pelomonas, Blautia, Ruminococcus-1, Roseburia and Empedobacter significantly increased in the symptom group as compared with the control group (Figures 8,9). 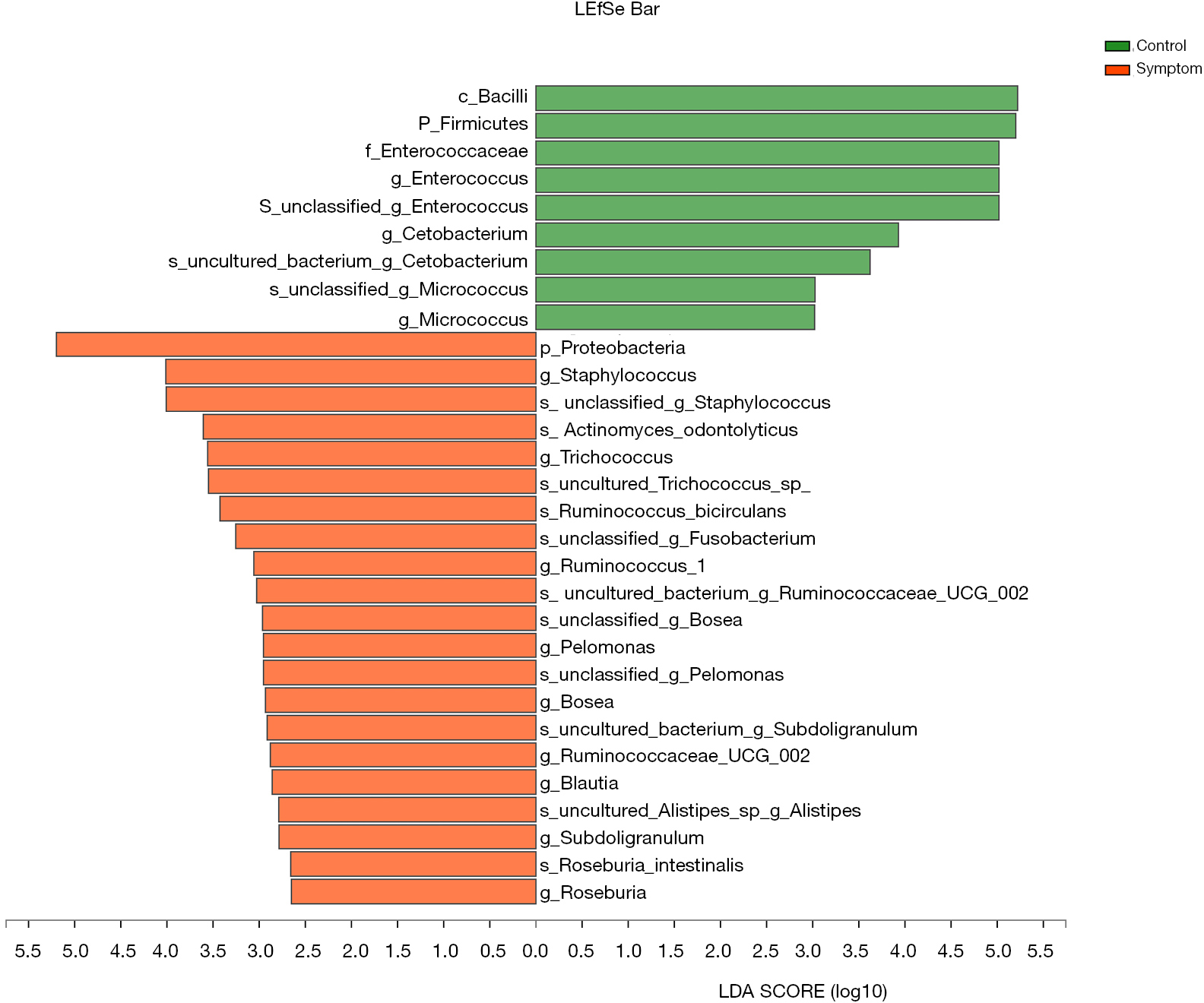 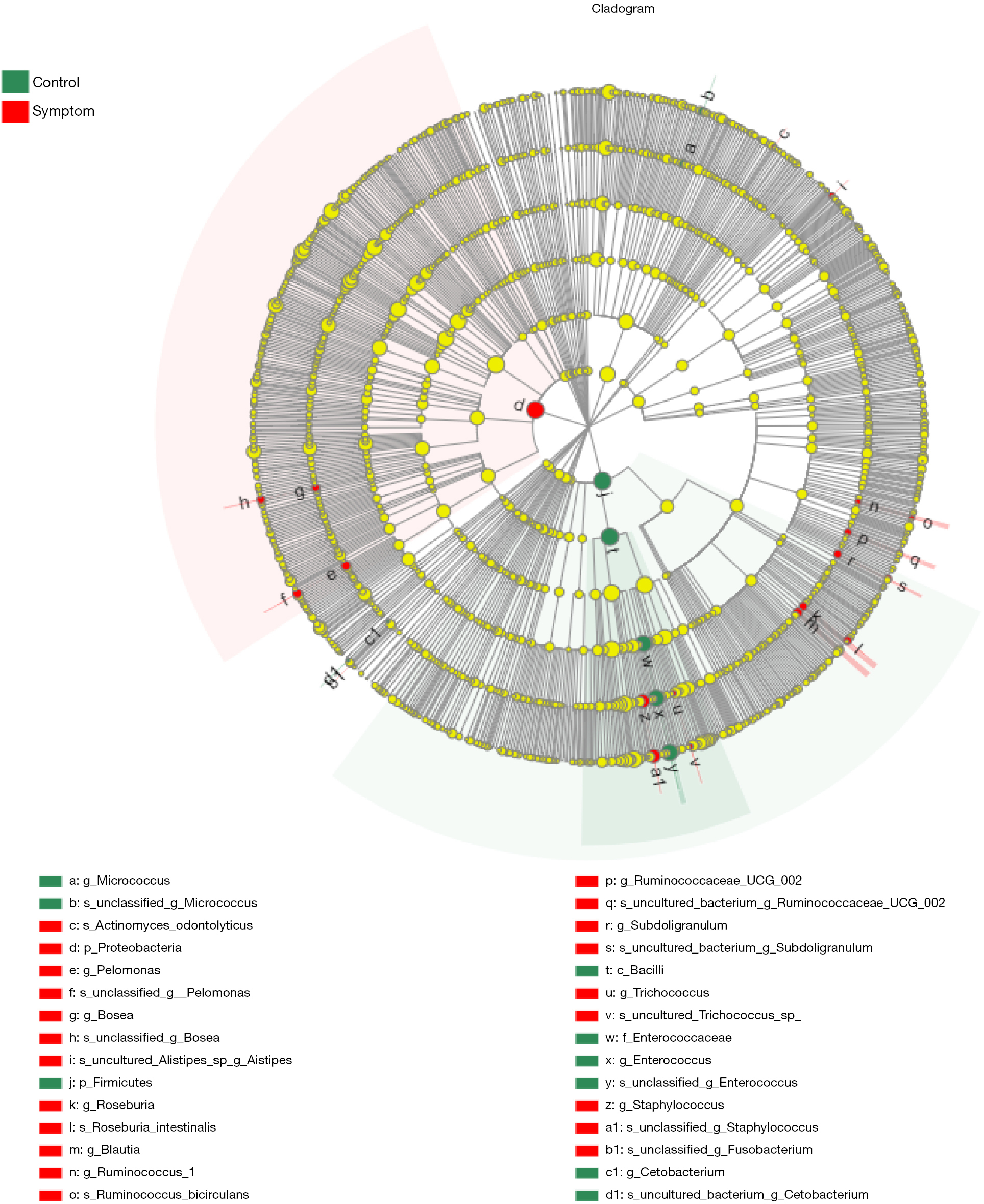 The composition of the OTU sequence was transformed into KEGG orthology to analyze differences in metabolic pathways between the control and symptom groups. We identified 5 significantly enriched and 5 depleted pathways in bile samples in the symptom versus control group.

Figure 10 Differences in KEGG pathway levels between the control and symptom groups. KEGG, the Kyoto Encyclopedia of Genes and Genomes.

To the best of our knowledge, this study represents the first to apply high-throughput sequencing technology for the study of biliary microbiota in patients with biliary complications after liver transplantation. With use of this technique, it was possible to examine the role of biliary microbes associated with the onset, occurrence and development of biliary complications following liver transplantation.

As bile acids present in the bile contain a certain amount of antimicrobial activity (8), the biliary tract of healthy people is generally considered to be a relatively sterile environment (9). However, in certain diseases or infectious conditions, bile acid secretion can be reduced (10). A few studies have used modern molecular methods to characterize the microbes present in bile, mainly in relation to various disease conditions (11,12). In our study, the main bacterial phyla in bile samples of the symptom group were Proteobacteria, Firmicutes, Actinobacteria and Bacteroidetes, while the main bacterial genera in this group were Pseudomonas, Klebsiella, Lactococcus and Rhodococcus. In a study on bile microbiota in patients with PSC the most common phyla were Bacteroidetes, Firmicutes, Proteobacteria, Fusobacteria and Actinobacteria, and the most common genera were Prevotella, Streptococcus, Veillonella, Fusobacterium and Haemophilus. Streptococcus abundance was shown to be positively correlated with an increase in disease severity and it may play a pathogenic role in the progression of this condition (8).

Biliary complications, which are characterized by abnormal liver function, biliary stricture and obstruction, represent one of the major problems associated with liver transplantation (13,14). If treatments such as medications, endoscopy, interventional therapy are ineffective, these complications can eventually lead to liver failure and even death (15,16). Biliary stricture can be characterized as either anastomotic or non-anastomotic. The former is mainly related to surgical techniques or local ischemia. Therefore, in this study, patients with biliary anastomotic stricture after liver transplantation were not included. In a prospective study reported by Gotthardt (6), 213 patients with biliary complications after liver transplantation underwent endoscopic retrograde cholangio-pancreatography (ERCP), and bile samples were collected during the first endoscopic treatment. Bacteria or fungi were found in 180 patients, with 57% being Gram-positive and 24% Gram-negative bacterial isolates, and the main species obtained were Enterococcus and Escherichia coli. The results of this study suggest that infections of Enterobacteria and fungi are significantly associated with the clinical signs of cholangitis, a condition which significantly lowers survival rates in patients with biliary tract injury.

In our study, patients in the symptom group included those whose imaging results indicated the presence of the non-anastomotic biliary stricture, and the patients displayed clinical signs such as fever and cholangitis. At the phyla level, bile samples in the symptom group predominantly consisted of Proteobacteria, with this content being significantly greater than that observed in controls. Pseudomonas and Klebsiella were the dominant genus in the symptom group, but were not significantly different from that of the control group. Bile samples from patients in the symptom group were also assessed in bacterial cultures, with these cultures showing the presence of Acinetobacter baumannii, radiation Rhizobium, Enterobacter cloacae, Klebsiella pneumoniae, Pseudomonas aeruginosa, and Chryseobacterium indologenes. Among these, five species belong to Proteobacteria, suggesting that Proteobacteria may play a significant role in the occurrence and development of biliary tract injury after liver transplantation.

Enterococcus, a bacterium that can grow in a bile-rich environment, is a normal flora of the human intestine and one of its probiotics. This bacterium can regulate the balance of intestinal flora and also possesses certain immune regulatory and anti-allergic effects (17). In our study, Enterococcus was found to be enriched in bile samples from the control group. The absence of enrichment in symptom patients may be due to changes in the bile microenvironment associated with biliary complications and a disruption of the inter-dependent balance of bile flora. In this way, the reduction in abundance of Enterococcus in biliary complication patients suggests that Enterococcus may play an important role in maintaining the stability and balance of bile microecology.

Staphylococcus, a conditional pathogen, belongs to the phylum Firmicutes, class Bacilli, order Bacillales and family Staphylococcaceae. Some strains of Staphylococcus can produce a variety of pathogenic factors such as exotoxin, enterotoxin, agglutination factor and bio film, which represent common bacterium of biliary infection. We found that Staphylococcus was enriched in the bile of patients with biliary complications from the symptom group. These findings suggest that this bacterium may contribute to the biliary injury in immunodeficient patients after liver transplantation.

There exist some salient differences in the metabolic pathways of bile samples between the two groups. However, the 16s rRNA sequencing analysis is limited and predictive in the study of KEGG pathways. Whether these pathways are involved in the development and progression of biliary complications after liver transplantation will require further studies which can incorporate a combination of metagenomics and metabolomics.

There remain some limitations in this study. Notably, an increase in sample size and multicenter experiences will be required to corroborate these findings. In addition, combining genomics, metabolomics and transcriptomics will be necessary to achieve a more comprehensive and deep understanding of the pathogenesis of biliary complications after liver transplantation.

Funding: This study was supported by the National Natural Science Foundation of China (Grant No. 81570586).

Ethical Statement: The authors are accountable for all aspects of the work in ensuring that questions related to the accuracy or integrity of any part of the work are appropriately investigated and resolved. This study was approved by ethics committee in Beijing Friendship Hospital (No. 2017-P2-060-02). Written informed consent was obtained from participants.