Prehypertension and risk for all-cause and cardiovascular mortality by diabetes status: results from the national health and nutrition examination surveys

Prehypertension, also known as high normal blood pressure (BP), is an intermediate BP state between normal BP and hypertension that is characterized by designating systolic BP (SBP) of 120 to 139 mmHg and diastolic BP of 80 to 89 mmHg (1,2). Prehypertension is a common condition across age, sex, ethnicity, which continues to be a major global health burden (3). A large number of previous studies have shown that prehypertension could significantly increase the risk of hypertension (4), target organ damage (5), cardiovascular events (6), and mortality (7). Meanwhile, data from 1,129,098 participants, which were derived from 20 prospective cohort studies, demonstrated that prehypertension was associated with cardiovascular disease (CVD) mortality, but not with all-cause mortality (8). Another systematic review and meta-analysis of 13 prospective studies with 870,678 participants showed that prehypertension was not associated with all-cause mortality, but was significantly associated with a greater risk of CVD mortality (9). The inconsistency of the above findings indicated the need to investigate whether prehypertension was significantly related to future cardiovascular and all-cause mortality. There were several previous studies that have revealed how prehypertension probably increased the risk of CVD events among diabetic patients (10-12). However, a randomized trial performed in United States and Canada, showed that in patients with type 2 diabetes with high risk for cardiovascular events, targeting a SBP of less than 120 mmHg, as compared a target with less than 140 mmHg, did not reduce the rate of composite major cardiovascular events (13). In addition, there were different views on the therapeutic target of BP to prevent CVDs or mortality in patients with type 2 diabetes. Therefore, the aim of this study was to investigate the association of prehypertension with cardiovascular and all-cause mortality among United States adults with and without diabetes using data from the National Health and Nutrition Examination Surveys (NHANES) and how the associations were modified by age, gender and ethnic subgroups.

Data for this study was obtained from the 1999–2014 NHANES, which was an ongoing study designed to assess the health and nutritional status of adults and children in the United States. The NHANES was a nationally representative survey of the civilian, non-institutionalized United States population conducted by the National Center for Health Statistics of the Center for Disease Control and Prevention. Detailed descriptions of the survey design were published elsewhere (14-16). In the 1999–2014 NHANES study, subjects with age ≥18 years old with diagnosis on the status of diabetes and prehypertension were enrolled. However, subjects that aged <18 years old, missing data on diabetes history, missing hemoglobin A1c (HbA1C), missing fasting blood glucose (FBG), missing BP, missing mortality data and people with hypertension at baseline were excluded. After applying the exclusion criteria, there were total 26,070 participants included for analysis (Figure 1). The survey protocol was approved by the Institutional Review Board of the Centers for Disease Control and Prevention. All participants have provided written informed consent.

The questionnaires and test indicators of the NHANES were all obtained based on a standardized procedure and protocol. Age, sex, ethnicity, smoking status, educational level, history of CVD and cancer were self-reported using questionnaire during the in-person interview. Medication history was obtained from self-report and questions for prescribed medications. Smoking status, baseline CVD and cancer history were dichotomized as yes or no. Educational level was categorized into less than or more than high school education. Other covariates included height, weight, FBG, total cholesterol (TC), high-density lipoprotein cholesterol (HDL-C) and HbA1C were all according to a standardized procedure and protocol. Body mass index (BMI) was defined as mass (kg) divided by the square of height (m2). Estimated glomerular filtration rate (eGFR) was calculated using Modification of Diet in Renal Disease formula (19). Detailed examination methods and questionnaire information can be referred to https://wwwn.cdc.gov/nchs/nhanes/Default.aspx.

Baseline characteristics are presented as mean ± standard deviation (continuous variables) or percentage (categorical variables) as appropriate. The One-Way ANOVA, Kruskal Wallis H test and Chi-square tests were used for test for subgroup differences. Participants were grouped into without diabetes and prehypertension, diabetes alone, prehypertension alone and had both diabetes and prehypertension. Survival analysis was performed using standardized Kaplan-Meier curves, and log-rank test was performed to compare the differences in survival rate by prehypertension/diabetic status. Cox proportional hazards regression models were used to calculate hazard ratios (HRs) and 95% confidence interval (CI) for all-cause and cardiovascular mortality. The model 1 only adjusted for prehypertension/diabetic status, and model 2 was additionally adjusted for age and gender. Model 3 was adjusted for age, gender, smoking, education, race, BMI, baseline CVD, baseline status of cancer, TC, HDL-C, eGFR, statin using and antiplatelet drugs. Indicators being used for subgroup analysis included age (<70 or ≥70 years), gender (male and female) and race (White and non-White) and their interactions between diabetes and prehypertension status with all-cause and cardiovascular mortality were also tested. A 2-sided P<0.05 was considered statistically significant. All statistical analyses were performed using R version 3.3.2 (R Foundation for Statistical Computing, Vienna, Austria). 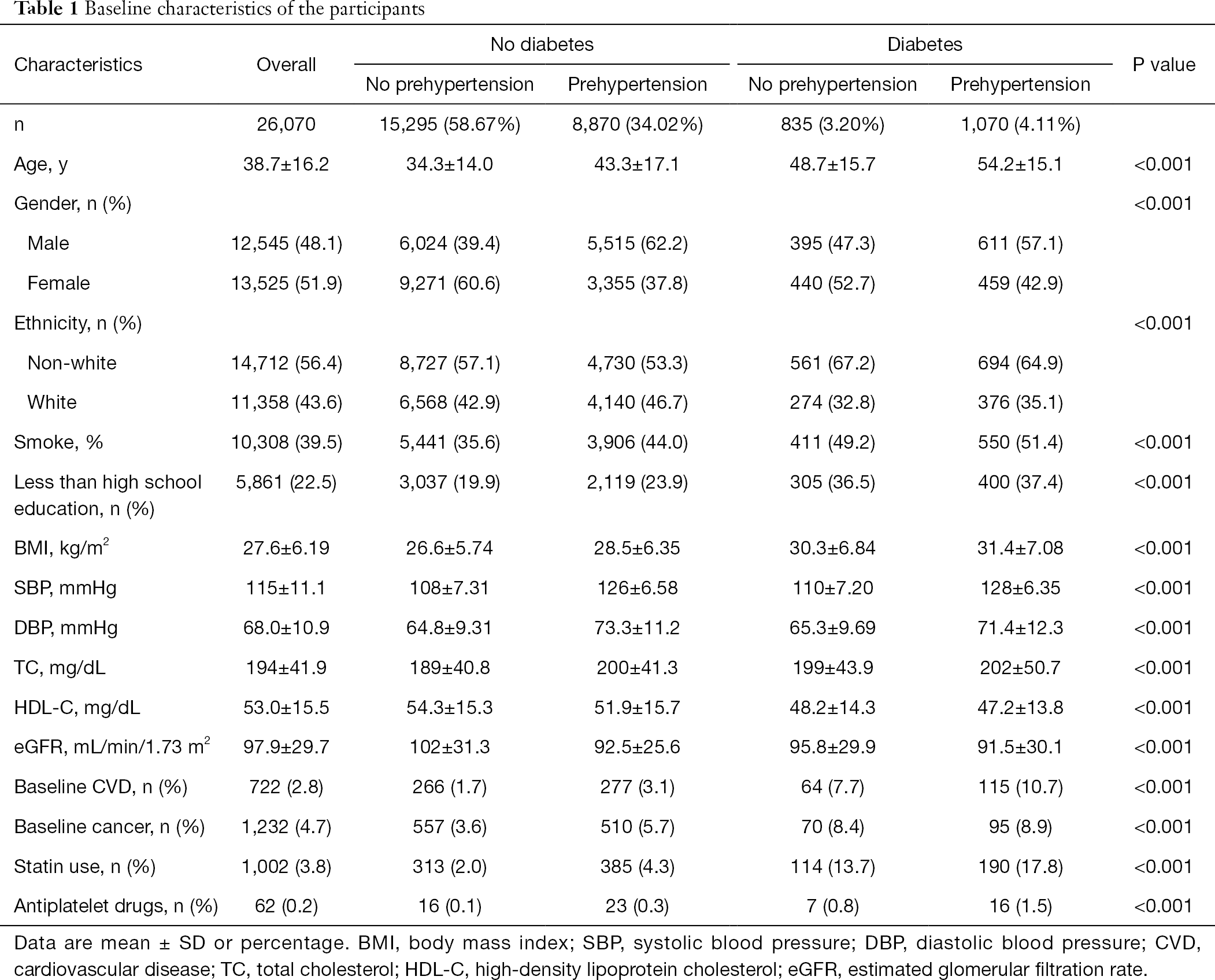 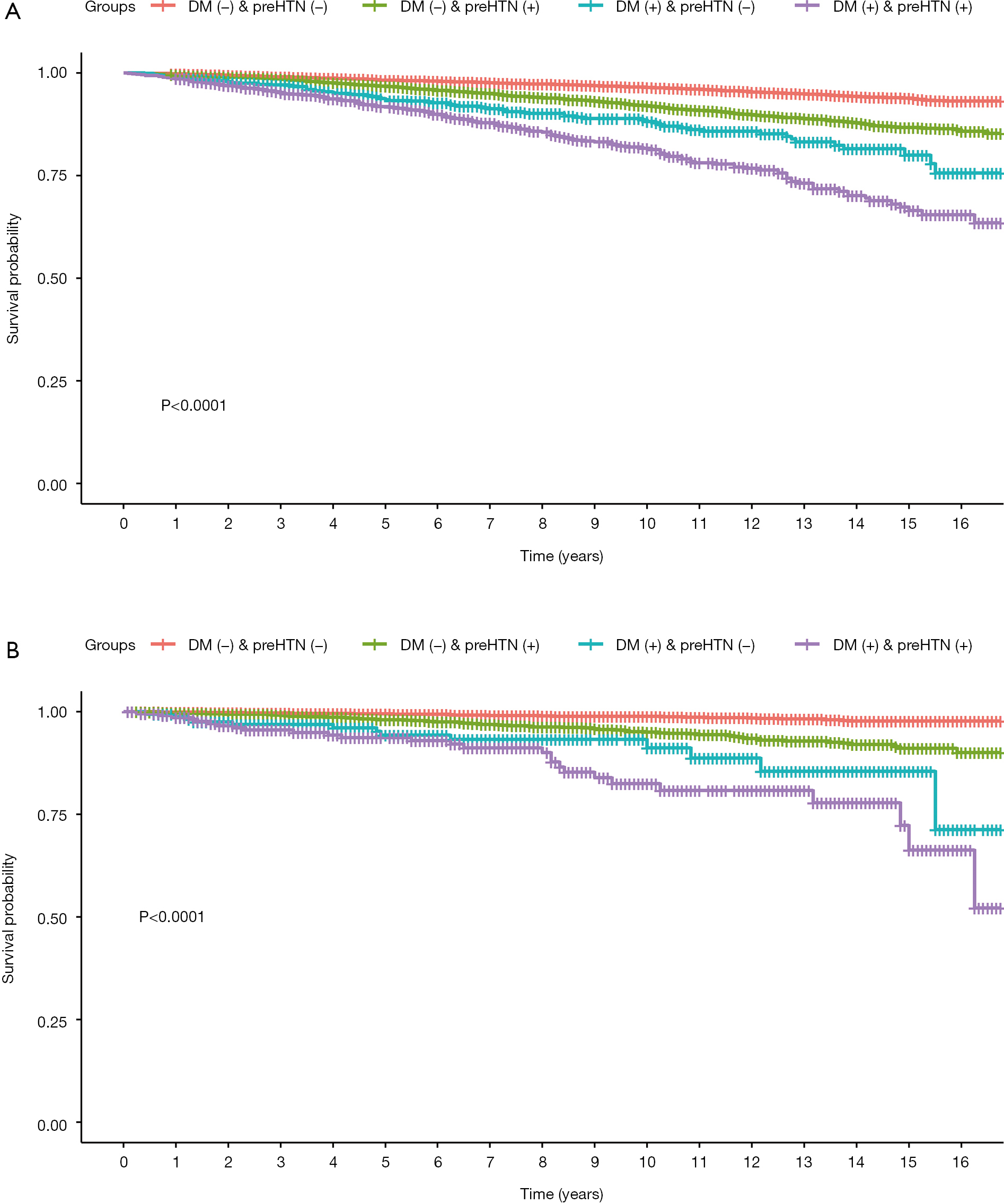 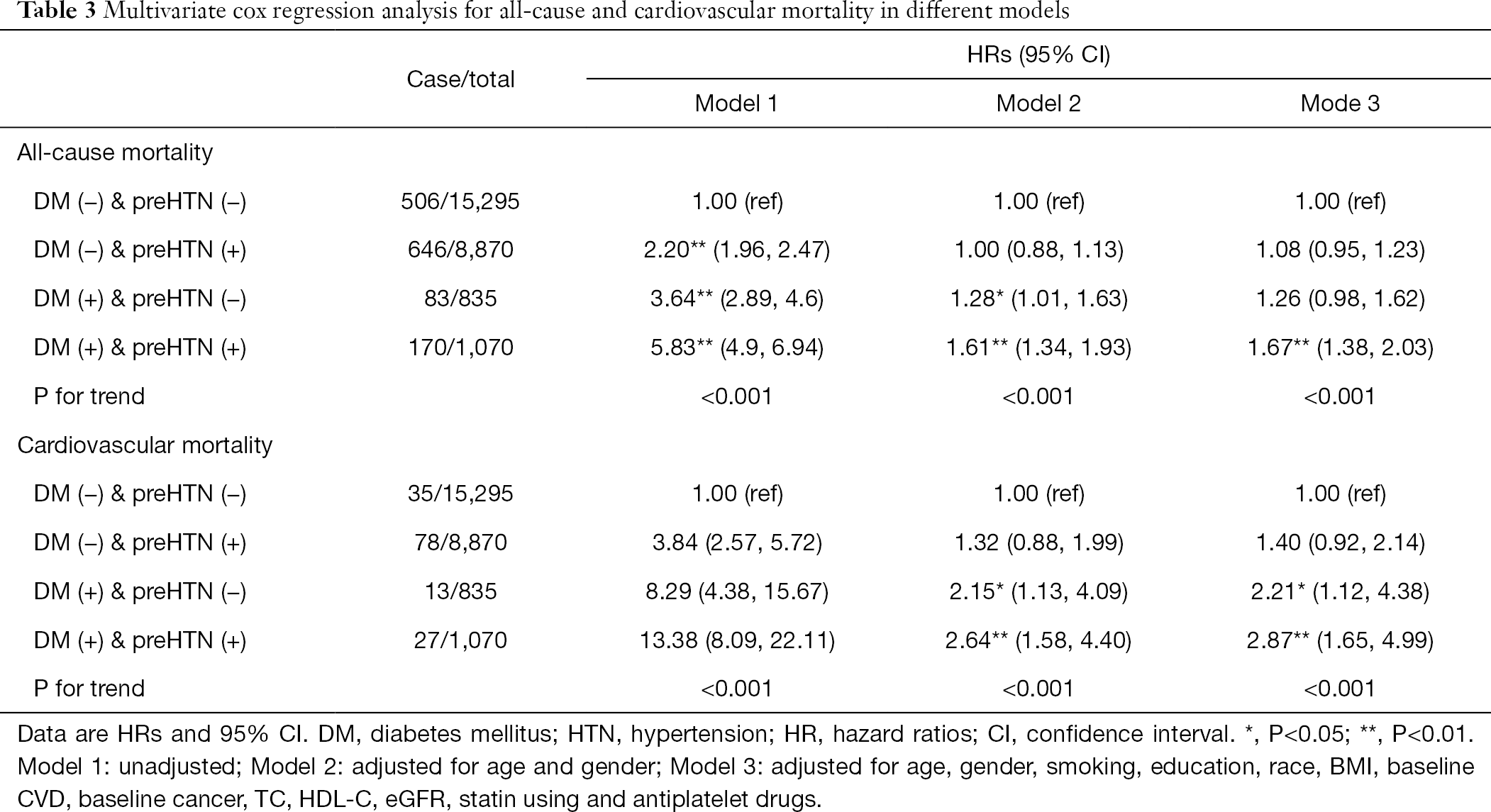 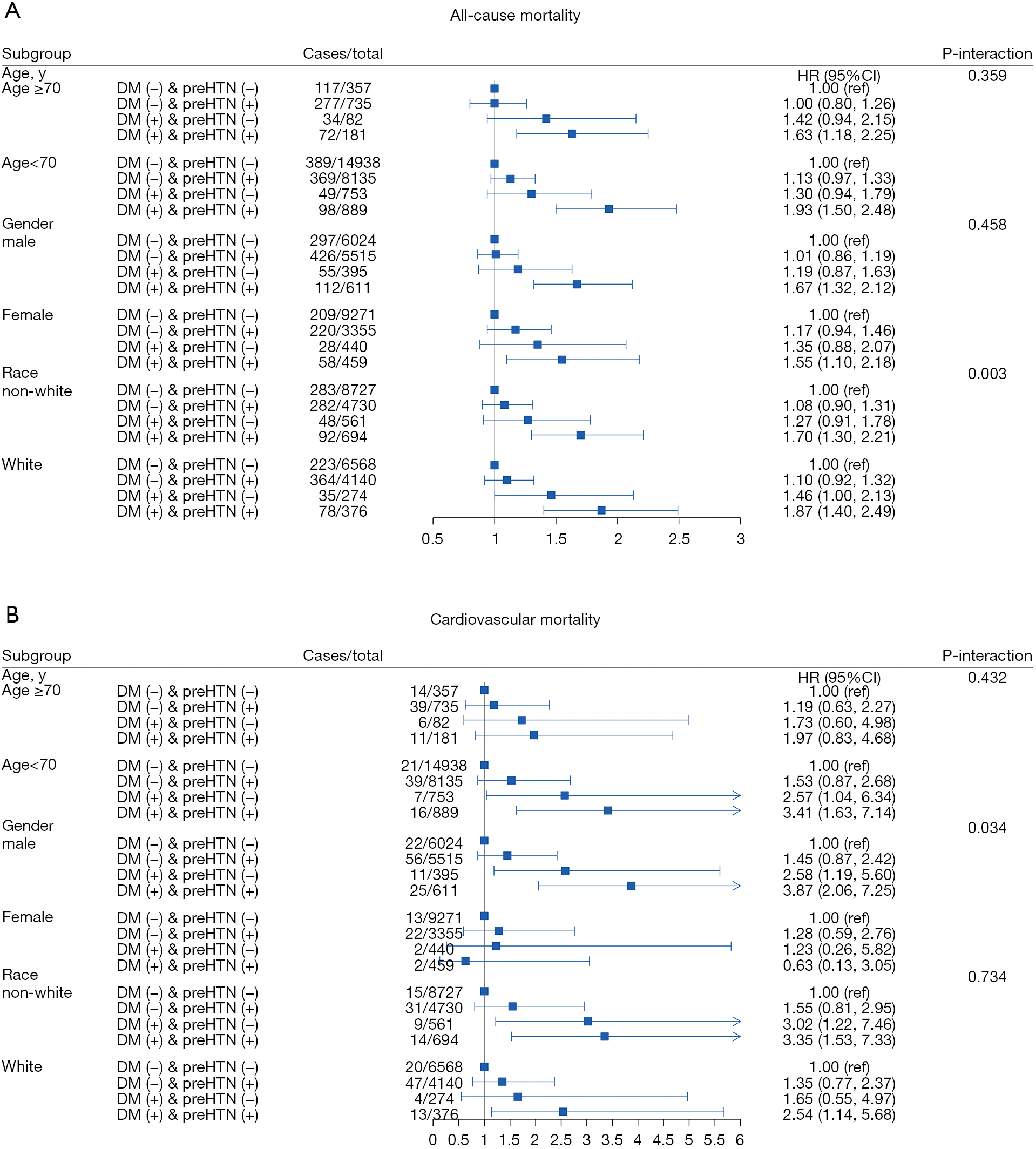 Several limitations should be taken into consideration when interpreting our results. First, FBG and HbA1C were measured only once at baseline, and we did not have data on postprandial blood glucose after 2 hours, which might result in bias in the estimation of the total number of diabetes. Second, we did not adjust for physical activity, which may also associate with cardiovascular and all-cause mortality. In addition, many confounders were self-reported, such as smoking status, previous disease history and medication history, which might be susceptible to self-report bias. Finally, the types of diabetes were not available within the NHANES data. Despite these limitations, the current study also has several strengths. First, the study obtained data from a nationally representative sample. Second, standardized protocols were used for data collection, including BP, HbA1c, and fasting plasma glucose.