Percutaneous intervention is widely used to treat peripheral vascular disease using ipsilateral antegrade femoral arterial access and vascular closure device (VCD) (1-3). However, it is associated with vascular complications and significant morbidity and mortality secondary to retroperitoneal hemorrhage (1,2,4). Herein, we describe a case report with hemorrhagic shock to technical errors, who was successfully treated by resuscitative endovascular balloon occlusion of the aorta (REBOA), which is the first case to show a beneficial role as damage control surgery.

A 71-year-old man with hypertension presented with a 3-month history of right leg claudication. He reported a history of percutaneous transluminal angioplasty (PTA) of the right popliteal and the anterior tibial arteries 2 years prior to presentation. He continued to smoke after the procedure and did not use any medications including antiplatelet drugs. Physical examination showed absent pulsation in the dorsalis pedis and feeble pulsation in the popliteal artery. Repeat PTA of the right lower extremity peripheral artery was performed. A 6 Fr sheath was inserted into the right common femoral artery (CFA) via ipsilateral antegrade access (AA). Baseline blood pressure was 175/74 mmHg. Peripheral angiography revealed significant stenosis of the distal superficial femoral artery (SFA) and the popliteal artery. We performed balloon angioplasty and deployed the EluviaTM drug-eluting stent (Boston Scientific, Marlborough, MA, USA) at the site of the distal SFA lesion. We used the 6 Fr Mynxgrip VCD (Cordis, Milpitas, CA, USA) for femoral puncture site closure.

After transfer to the general ward, the patient developed severe right lower quadrant pain, and his blood pressure reduced to 110/53 mmHg. Immediate abdominopelvic computed tomography (CT) performed for suspected retroperitoneal hemorrhage (RPH) revealed active bleeding from the right external iliac artery (EIA) at the site of sheath insertion and a huge retroperitoneal hematoma (Figure 1). Unfortunately, the patient’s systolic blood pressure reduced further to 50 mmHg after the CT scan, and he developed cardiac arrest. We performed manual compression of the puncture site and chest compressions. His vital signs were restored following a minute of cardiopulmonary resuscitation. At our hospital, a covered stent was not available for placement in EIA. Therefore, interventional therapy for retroperitoneal bleeding could not be performed, and the patient was transferred to the operating room under compression of the puncture site. Despite blood transfusion, vasopressor support and external compression, his systolic blood pressure was maintained at 80 mmHg. Shortly before the induction of general anesthesia, we observed rapid hemodynamic deterioration (systolic blood pressure <50 mmHg), and REBOA was performed as a damage control procedure.

Ultrasound-guided cannulation of the left CFA was performed for placement of a 7 Fr Radiofocus® Introducer II (Terumo, Tokyo, Japan) sheath. After sheath insertion, the 7 Fr RESCUE BalloonTM (Tokai Medical Products, Aichi, Japan) was deployed using the umbilicus as an external anatomical landmark. The balloon was initially inflated to 8 mL for partial occlusion of the lower abdominal aorta, without any resistance. Balloon occlusion improved the patient’s systemic blood pressure from 50 to 130 mmHg, and the ideal location for zone 3 REBOA was confirmed radiographically (Figure 2). Following REBOA for damage control resuscitation, a paramedian incision made between the puncture site and the groin revealed a huge hematoma, and this was the suspected site of bleeding. The balloon was deflated gradually and cautiously to definitively identify the bleeding site. The site of injury was subsequntly identified in the lateral wall of the EIA, and primary repair was performed using 6-0 Prolene (Ethicon, Somerville, NJ, USA) suture. The REBOA balloon catheter was removed in the operating room. The total time of partial aorta occlusion was 34 min (Figure 3). His vital signs stabilized postoperatively, and blood transfusion and vasopressor support could be withdrawn. The patient was discharged without any complaints 17 days postoperatively. 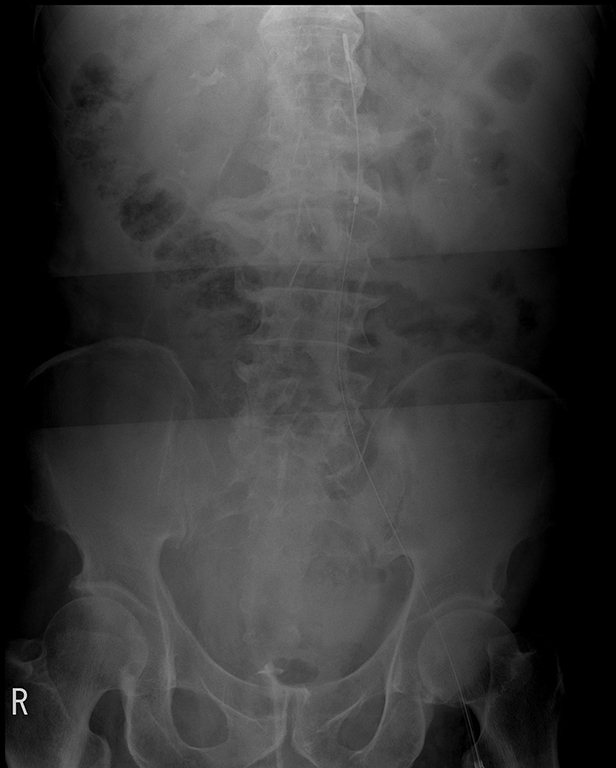 Figure 2 Radiograph showing infrarenal resuscitative endovascular balloon occlusion of the aorta in zone 3. Zone 3 of aortic occlusion corresponds to the lowest area below the renal artery above the aortic bifurcation.

Endovascular therapy is a standard procedure for the treatment of peripheral vascular disease (1-3). Ipsilateral AA and conventional retrograde access (RA) are performed to treat infrainguinal occlusive disease (2,3). AA scores over RA by avoiding difficult inflow anatomy and reducing the contrast agent and radiation dose (1,3). However, AA is more likely to be associated with procedure-induced complications, such as retroperitoneal hematoma in cases with a high puncture site in the EIA (1,2). Therefore, ultrasound-guided CFA puncture is recommended. Manual compression is conventionally used for sheath removal upon completion of an endovascular procedure. VCDs potentially reduce procedure time and facilitate early ambulation. Therefore, currently, VCDs are useful alternatives to achieve hemostasis at percutaneous access sites following endovascular procedures (4). VCD use is associated with a low rate of complications; however, patients with high punctures, obesity, and vessel calcification are at a high risk of device failure (4). In this case, the patient developed massive RPH with shock, which could be attributed to the following factors: (I) unintentionally, the EIA puncture performed instead of CFA puncture without ultrasound guidance. (II) The puncture site was observed on the lateral wall of the EIA, resulting in ineffective compression of the EIA. (III) Vessel calcification was observed in this patient.

Conservative management is acceptable as standard care for RPH in hemodynamically stable patients, and endovascular treatment including covered stent placement could be attempted in patients with RPH (5,6). Vascular surgery is necessary in hemodynamically unstable patients. Surgery is indicated even in hemodynamically stable patients in the event of endovascular treatment failure or in patients in whom an appropriate graft is unavailable. However, identification of the bleeding site is often challenging, and surgery is usually associated with significant morbidity and mortality (1,6). Therefore, aortic occlusion is an acceptable alternative for hemostasis to achieve temporary hemodynamic stabilization and restore blood pressure in patients with hemorrhagic shock secondary to RPH.

REBOA is used in patients with trauma presenting with hemorrhagic shock because this salvage technique can temporarily achieve hemodynamic stabilization in patients with non-compressible torso hemorrhage (7,8). REBOA offers the following benefits in patients with hemorrhagic shock secondary to RPH: (I) it increases the central arterial pressure. (II) It reduces active hemorrhage below the level of the inflated balloon. (III) Owing to the relatively bloodless operative field, the site of bleeding can be easily identified, which minimizes the significant morbidity and mortality associated with technically challenging surgery.

There are several limitations to our observations. If the hemorrhagic shock secondary to VCD failure has been suspected earlier, the patient would not have developed a cardiac arrest and might not have needed REBOA. And more precise methods to evaluate the shock and to manage the bleeding were not performed immediately. However, we believe that our experience can provide valuable information to establish an optional strategy for patients with hemorrhagic shock secondary to RPH.

In conclusion, REBOA is not a definite treatment, but it could be a life-saving procedure in patients with hemorrhagic shock secondary to RPH. If not delayed, REBOA may be a useful option as bridging management for hemostasis and may reduce morbidity and mortality rates in patients with RPH with shock.

We would like to thank Editage (www.editage.co.kr) for English language editing.

Ethical statement: The authors are accountable for all aspects of the work in ensuring that questions related to the accuracy or integrity of any part of the work are appropriately investigated and resolved. The institutional review board of dankook university hospital approved this retrospective analysis pertaining to this case report: REBOA for retroperitoneal hemorrhage and shock after ipsilateral antegrade angioplasty with VCD. Written informed consent was obtained from the patient for publication of this Case report and any accompanying images.