Endometriosis is a well-known cause of infertility (1). The pathophysiological mechanisms by which endometriosis induces infertility remain unknown (2-4). Available molecular, histological and morphological studies have shown that endometriosis is harmful to the ovaries (5). Toxic content from an endometrioma may exert adverse effects such as increased oxidative stress and inflammation. It is probable that even mild endometriosis may adversely affect the oocyte development, embryogenesis and then implantation, resulting in the low fertility (6-10).

In recent years, the clinical outcome of ovarian endometrioma is a focus in the gynecological studies. It has been reported that surgical excision of these cysts may be harmful for the ovarian reserve (11,12). Especially, the removal of bilateral endometriomas will significantly and adversely affect the IVF outcome (12,13). Recently, studies have revealed that the responsiveness to ovarian hyperstimulation and the number of oocytes retrieved are significantly reduced in women with bilateral endometriomas compared with age-matched controls (14).

Progestins with good tolerability and low cost are the commonly used drugs for endometriomas and have been an economic alternative to surgery. MPA has been used as an alternative treatment to progestin for its unique advantages (15). Some studies have investigated the use of MPA in patients undergoing IVF (16-18). There is evidence showing that the embryos originating from MPA regimen in patients with advanced ovarian endometriosis have similar developmental potential as the short protocol (19). However, the responsiveness to hyperstimulation and the number of oocytes retrieved are still not unknown thoroughly from MPA protocol in patients with endometriomas (>3 cm) or undergoing cystectomy who have similar antral follicle count (AFC) as compared to tubal infertility during controlled ovarian hyperstimulation (COH) in (in vitro fertilization) IVF treatment.

This was a prospective case control study, and patients with endometriosis (cases) and those with tubal infertility (controls) were recruited from the Department of Assisted Reproduction of the Ninth People’s Hospital of Shanghai Jiaotong University’s School of Medicine between November 2015 and April 2016. The trial was registered in the Chinese Clinical Trial Registry (ChiCTR-ONC-15007399). This was performed according to the Declaration of Helsinki for Medical Research. All participants provided informed consents after counseling for infertility treatments and routine IVF procedures.

The patients with endometriosis were included according to the following criteria: (I) patients were aged 20–40 years, (II) the follicle stimulating hormone (FSH) was less than 10 IU/L, (III) the AFC was 5–20, (IV) patients with diagnosed with advanced endometriosis on laparoscopy or laparotomy and had ovarian endometriomas that were treated surgically by laparoscopy or laparotomy before IVF or had ovarian endometriomas that were aspirated and identified as “chocolate” cysts (>3 cm) during ovulation monitoring or at the time of oocyte retrieval.

The tubal infertility patients who had the IVF/ICSI attempt were recruited in the same time period according to the following criteria: patients did not undergo prior ovarian surgery and did not have any ultrasonographic sign of endometriotic and/or non-endometriotic ovarian cysts at the time of the cycle; they were matched with the advanced endometriosis patients by age at the time of the cycle. The women with tubal factor infertility undergoing their first IVF/ICSI inclusion criteria were as follows: (I) aged 20 to 40 years; (II) FSH less than 10 IU/L; (III) AFC 5–20.

The exclusion criteria in the endometriosis group and tubal infertility group were as follows: (I) patients had polycystic ovarian syndrome (PCOS); (II) patients had hydrosalpinx; (III) patients had adenomyosis on the laparoscopy or laparotomy, ultrasonography displayed disordered myometrial echo, or magnetic resonance imaging (MRI) showed adenomyosis; (IV) patients had documented ovarian failure including basal FSH above 10 IU/L. The cases and controls were age and AFC matched (1:1).

A total of 300 cycles in 300 patients were analyzed. Patients were divided into two groups: 150 cycles (EMS group, n=150) were in women who were diagnosed with advanced endometriosis by laparoscopy or laparotomy and had ovarian endometriomas treated surgically before IVF or had ovarian endometriomas that were aspirated and identified as “chocolate” cysts (>3 cm) during ovulation monitoring or at the time of oocyte retrieval; 150 cycles (control group, n=150) were in women undergoing IVF because of tubal factor infertility. Staged III–IV endometriosis was diagnosed according to the revised American Fertility Society (AFS) classification of endometriosis (20).

This was a prospective non-inferiority trial. The sample size was estimated according to previous studies (16,21). The primary end-point was the number of oocytes retrieved. The mean number of oocytes retrieved was assumed to be 10.0, and that for non-infertility was <2.0. It was assuming that the number of normal ova obtained was similar between endometriosis women and tubal infertility patients. Thus, the required sample size was 130 for each group to achieve an α=0.05 and a power of 0.8 (PS power and sample size calculations, version 2.1.30). Given the possibility of 10% dropouts, 150 women were included in each group.

Women undergoing IVF followed the MPA + hMG protocol that has been reported in detail previously (21). The final stage of oocyte maturation was triggered with decapeptyl (0.1 mg) (Ferring International Center SA, Germany) and hCG (2,000 IU; Lizhu Pharmaceutical Trading Co, China) (21). The embryo quality (the number/uniformity of blastomeres and the degree of fragmentation) was assessed (22). All follicles with a diameter larger than 10 mm were retrieved. Oocytes were fertilized conventionally or by intracytoplasmic sperm injection (ICSI). Embryos were graded in the same way on the third day. 1 or 2 good-quality embryos were transferred, and the procedure for frozen and thawed embryos was carried out the same as the study group.

The primary outcome was the number of oocytes retrieved. The secondary outcomes included the duration and dosage of hMG, number of mature oocytes (MII oocyte) retrieved, high/low ovary response, cycle cancellation rate, and clinical pregnancy rate. Cycles were cancelled because of hyper- or hypo-ovarian response. The hyper-response was defined as the serum estradiol level greater than 4,000 pg/mL and/or more than 20 follicles identified on ultrasonography before HCG administration. The hypo-response was defined as no more than three follicles on ultrasonography during ovarian hyperstimulation. 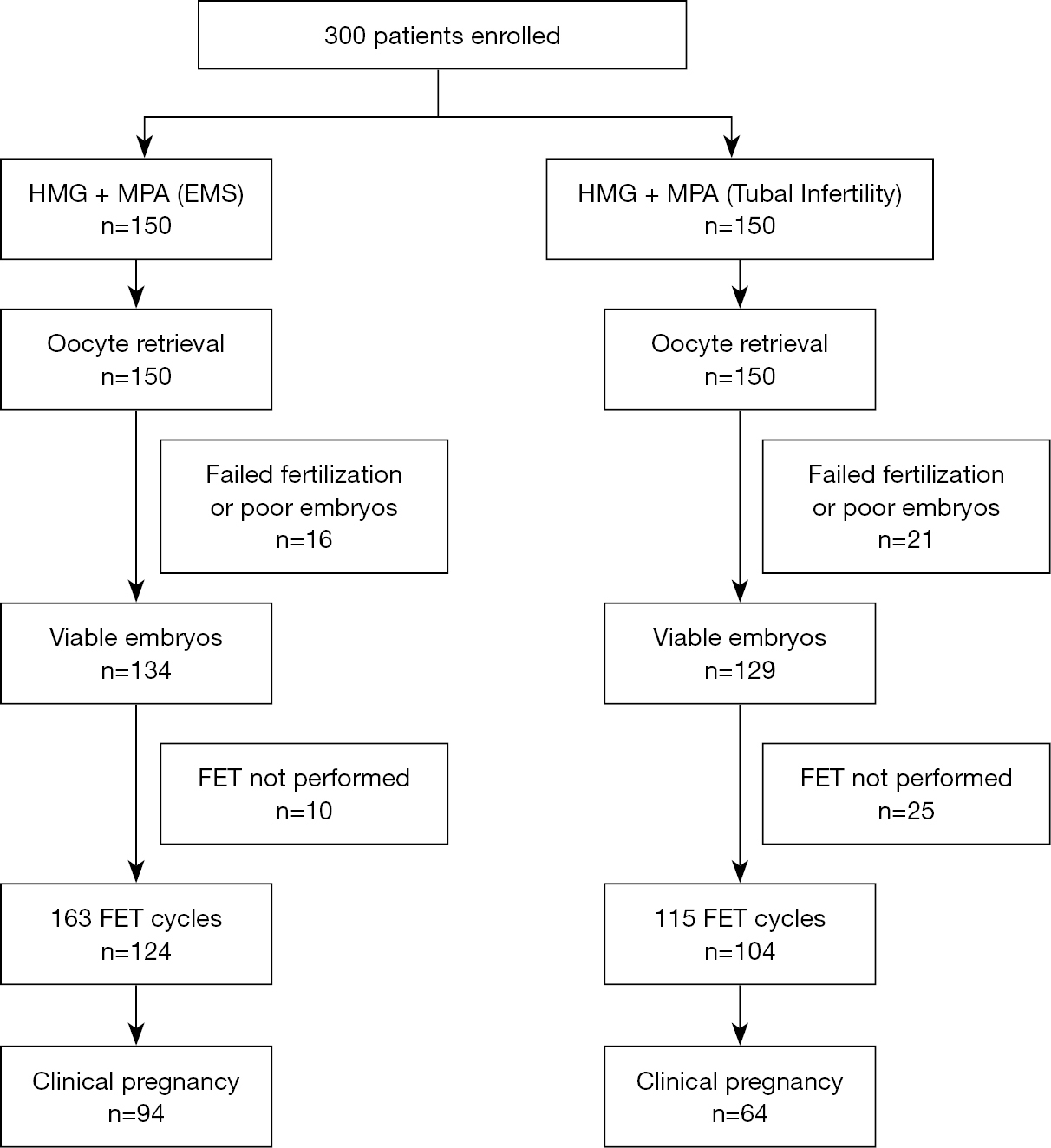 There were no significant differences in the age, BMI, AFC, baseline FSH, LH, E2 and P between two groups. However, the duration of infertility was longer and the primary infertility rate was significantly higher in the EMS group than in the control group (P<0.05) (Table 1). Moreover, no significant differences were not observed in the baseline characteristics (age, BMI, duration of infertility, AFC, previous failed FET cycles, primary infertility rate and baseline FSH, LH, E2 and P) between EMS surgery group and endometriomas group (P>0.05) (Table 2). 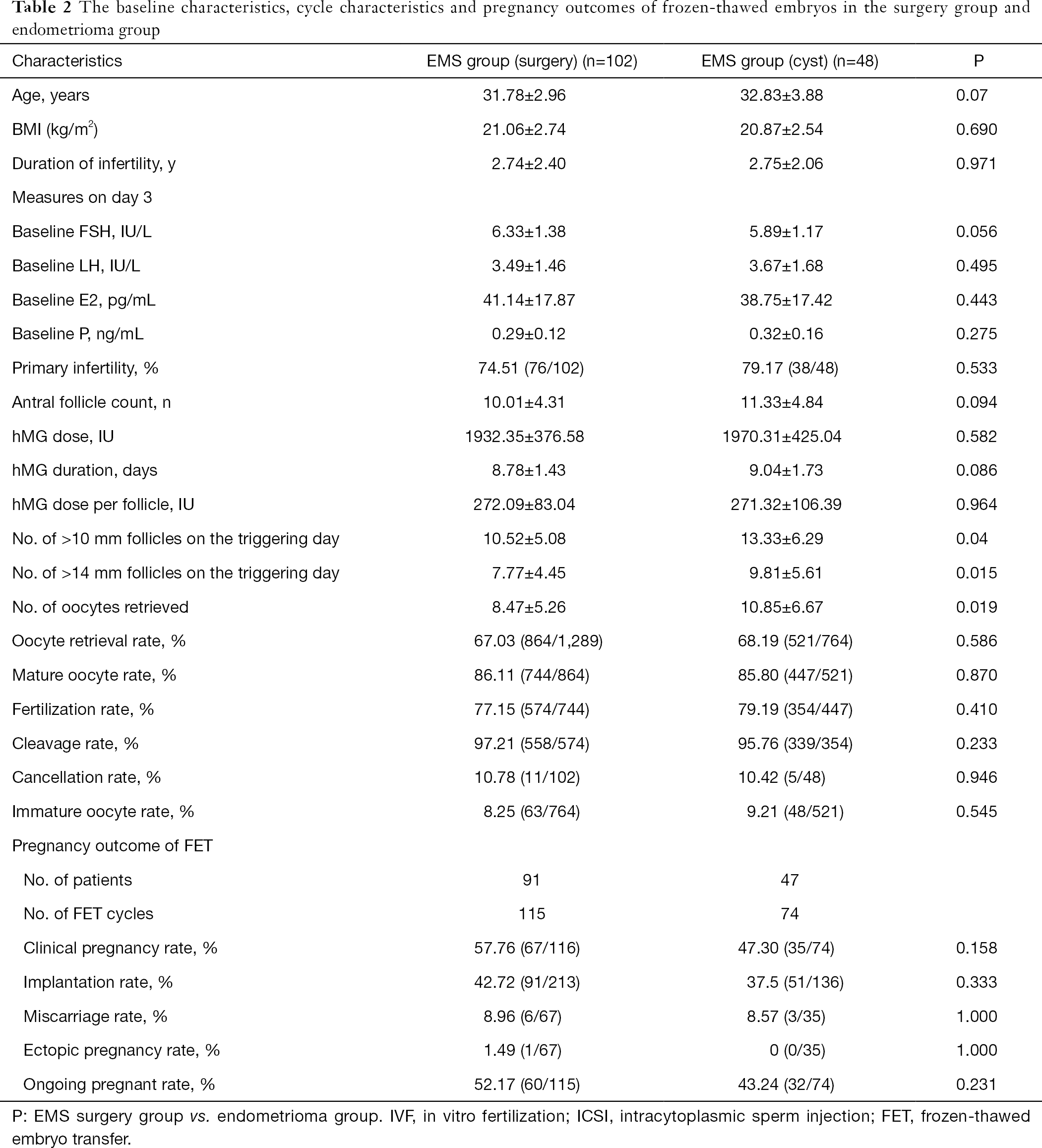 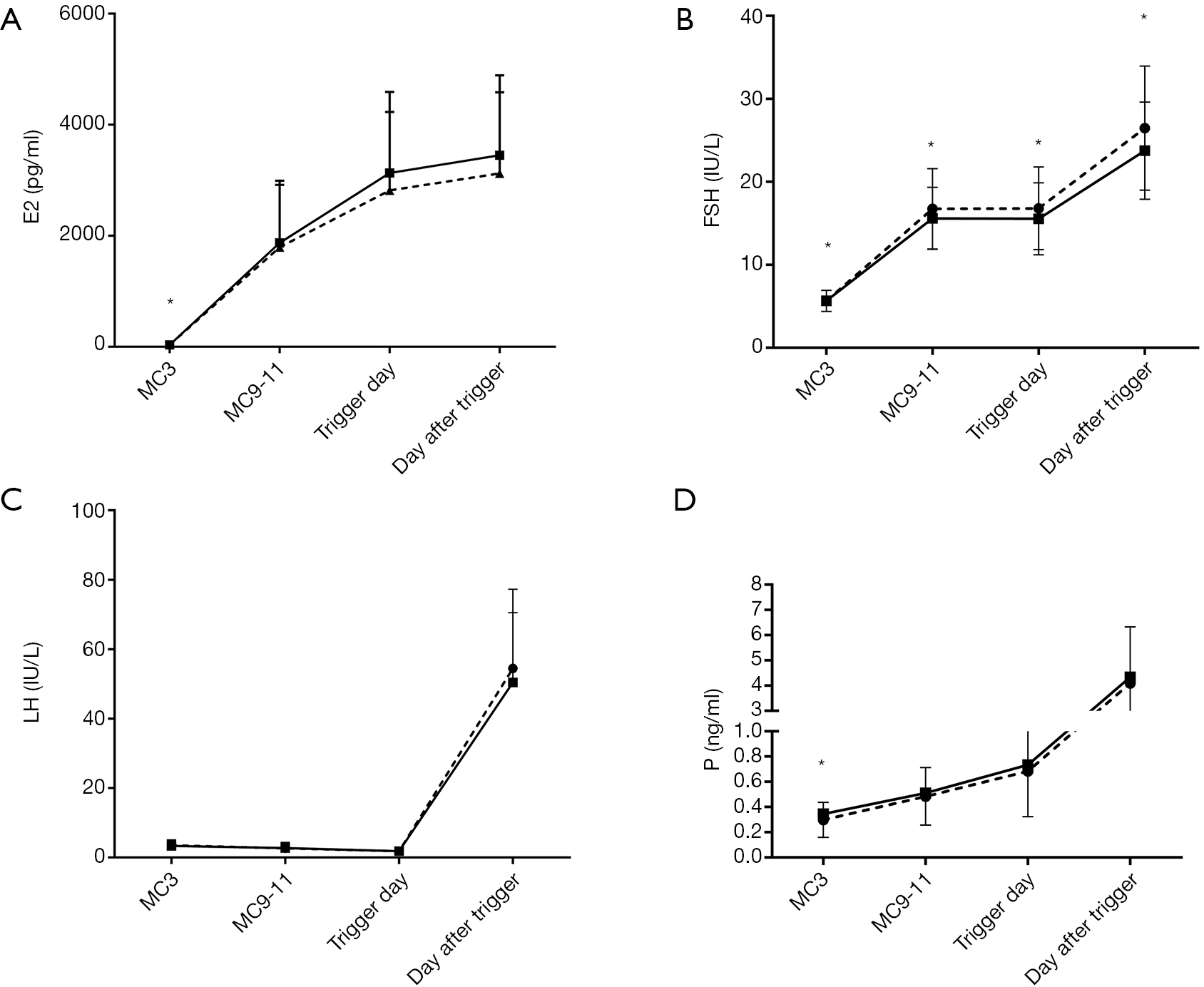 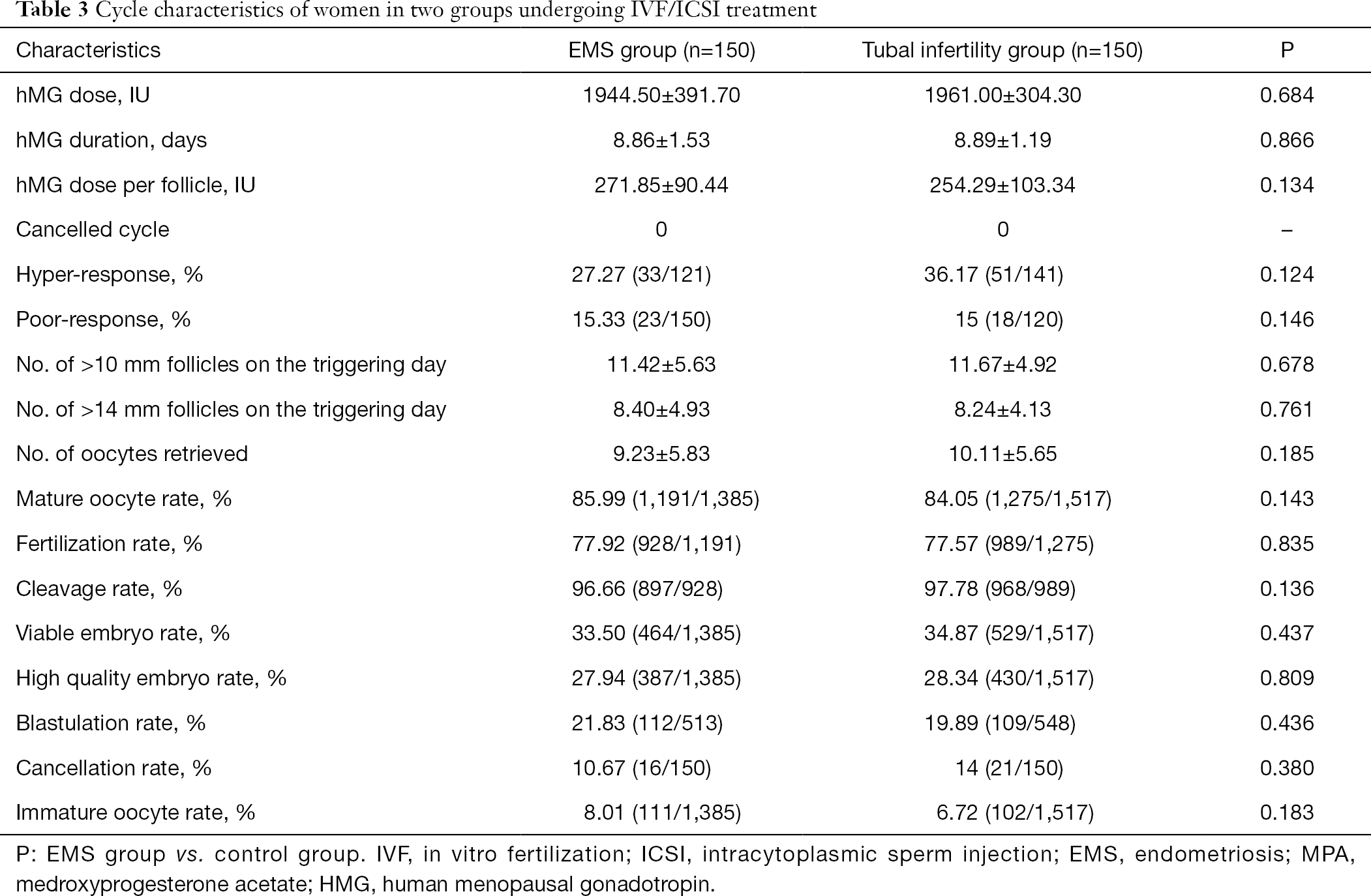 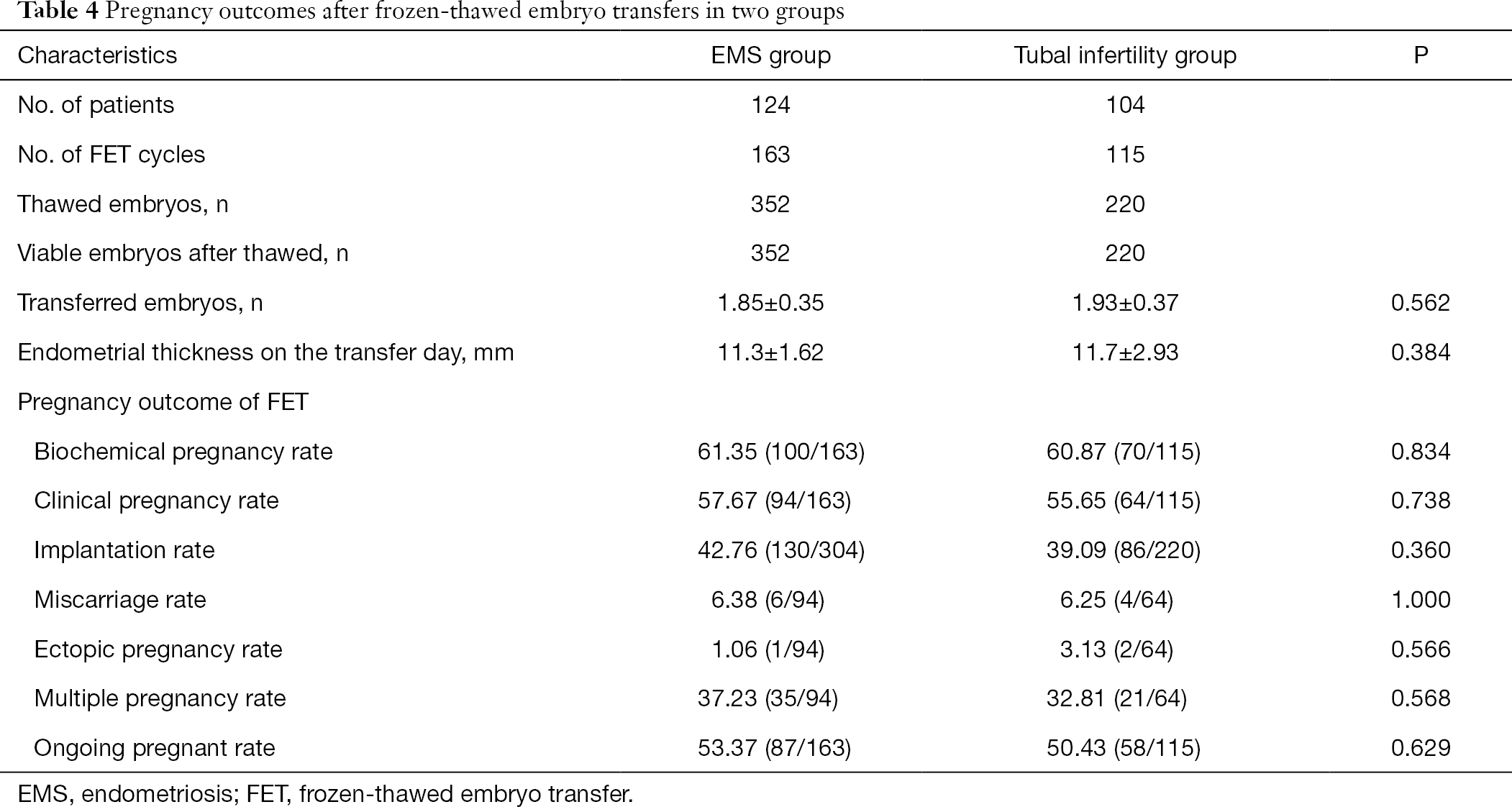 Endometrioma was not specifically examined in the presence of normal ovarian function in available studies. The expansion of results from most previous studies is limited by the methodology, sample size and accurate diagnosis (28,29). In order to resolve these controversies, the present prospective study was designed to assess the pregnancy outcomes with normal ovary reserve, in which controls matched in age and AFC were recruited. Recent studies have paid attention to the impact of surgical treatment for endometrioma on the ovarian reserve (30-32) and IVF/ICSI reproductive outcomes (33,34). However, the possible adverse effects of the endometrioma and the surgery for endometrioma on the oocytes and embryos in women with normal ovarian reserve during IVF/ICSI have not been studied. Our findings indicate the surgical removal of the cysts or the cysts themselves might not damage the oocytes and embryos in patients with normal ovarian reserve. Furthermore, the oocytes and embryos had similar developmental potential between patients receiving MPA protocol and tubal infertility patients. Therefore, based on our findings, the MPA and hMG protocol can be used without affecting the competent oocyte/embryo production in advanced endometriosis patient. The peak E2 level was comparable between control group and EMS group, which is not consistent with previous findings (35). This may be attributed to the normal ovary reserve in our study which is different from the inclusion criteria in previous studies.

Compared with women undergoing surgery for endometrioma, women with surgery for cysts had a similar implantation rate and clinical pregnancy rate, although a smaller mean number of oocytes retrieved was noted after endometrioma surgery. In the IVF procedure, the overall cancellation rate was 10.67% in the EMS group and 14% in the control group. The criterion for cancellation was no good-quality embryos. Our results showed endometriosis did not affect the embryo quality and the pregnancy related parameters (fertilization rate, embryo quality, implantation rate, pregnancy rate, and live birth rate), which was independent of active ovarian endometrioma or surgery treatment. Many patients have low ovarian reserve due to the operation of severe endometriomas, which leads to ovarian failure in some cases. Therefore, some patients with endometriomas have not been punctured due to very low possibility of malignancy excluded by B-ultrasound or MRI. The large ovarian cyst will affect the growth of follicles and oocytes retrieval during IVF, so ovarian cyst was punctured before oocytes retrieval. This choice may result in a bias in the findings. However, our results also revealed that endometriosis, even after laparoscopic treatment, affected the number of oocytes retrieved. In addition, following laparoscopic treatment, an ovarian endometrioma had no additional negative effects on the oocyte development. However, there is recent evidence showing that AFC is not a good option in evaluating ovarian reserve of endometriosis patients. Endometriomas, local inflammation, fibrosis, adhesions due to endometriosis and prior surgery may impair the visualization of follicles. AMH may serve as a better test for ovarian reserve. AMH was not counted, which may be a limit of the study. We will add this index in the follow-up study. Thus, more studies are needed to elucidate this issue and to confirm our findings.

Funding: This study was supported partially by the National Key Research and Development Program of China (No. 2018YFC1003000 to Y Kuang), the Natural Science Foundation of Shanghai (No. 81771574 to L Wu), and the Shanghai Municipal Commission of Health and Family Planning Foundation (No. 20174Y0036 to L Wu).

Ethical Statement: The authors are accountable for all aspects of the work in ensuring that questions related to the accuracy or integrity of any part of the work are appropriately investigated and resolved. This was performed according to the Declaration of Helsinki for Medical Research. All participants provided informed consents after counseling for infertility treatments and routine IVF procedures.