Currently, only few modalities for the assessment of small bowel motility are available, and each tool has several limitations in the clinical setting. Radiographic barium study can evaluate the entire passage through the small intestine, but it cannot objectively measure transit time, and patients are at risk for X-ray exposure. Small intestinal manometry can only analyze the motility of the upper part of the small intestine because the catheter cannot reach the lower part through the nose. Radiopaque markers are mainly suitable for the study of colonic and whole gut transit, whereas scintigraphic measurements of small bowel transit time (SBTT) are not generally used outside research project because normative data have wide transit time range. Other drawbacks of these procedures are lack of standardization in clinical practice and high cost of imaging equipment. The lactulose hydrogen breath test does not specifically measure the SBTT; rather, it reflects the summation of gastric transit time (GTT) and SBTT (1-7).

The development of capsule endoscopy (CE) started in the 1980s, and it has been used in clinical practice since the 2000 as a minimally invasive video endoscopy that allows visualization of the small bowel lumen (8,9). CE has been increasingly utilized and is currently part of the routine clinical practice to detect small intestinal disorders, such as obscure gastrointestinal bleeding (OGIB), polyps and tumors in the small intestine, and small intestine, or small/large intestine inflammatory bowel diseases including Crohn disease (10). CE is contraindicated in stenotic lesion or obstructive disorders (11).

Studies on SBTT using CE are scant, and thus, knowledge on the topic is insufficient (12-14). Hejazi et al. (15) observed that SBTT measured using video CE is not significantly different between patients with OGIB and those with iron deficiency anemia. Furthermore, the influence of diabetes mellitus, the most common disorder considered to negatively affect gastrointestinal motility, has not been consistent (15,16). Reaching any viable conclusion about the effect of obesity and prokinetics on intestinal transit was difficult because of conflicting reports (17,18).

Therefore, the primary aim of our study was to investigate the SBTT of CE and clinical factors affecting SBTT. Furthermore, we sought to clarify the intra-individual difference in SBTT and to study the feasibility of CE for the unknown motility of the small intestine.

The study was approved by the Niigata University Review Board (2018-0276) and conducted in accordance with the Declaration of Helsinki.

Outpatients who underwent CE at our hospital from October 2008 to March 2017 were analyzed using data from their electronic medical records. From the database, clinical data such as patients’ age, sex, body mass index (BMI), comorbidity of diabetes mellitus, previous abdominal surgery involving the small intestine or not, and use of prokinetics were extracted to investigate whether these factors affect SBTT.

Outpatients were given standard instructions as per our usual practice, which included a clear liquid diet after lunch the day prior to CE, followed by an overnight fast. Medication on the morning of the examination day was canceled. Patients did not receive polyethylene glycol before the procedure, but only received dimethicone for the pre-examination in order to remove the gastric mucus that hindered the CE examination of the lumen. Apart from the bowel preparation, no other mucosal cleaning or anti-bubble agents were performed or administered. The capsule (PillCam; Medtronic, Country Westmeath, Ireland) was taken around 9 AM on the day of the examination and patients were permitted to resume intake of clear fluid diet and light meal at 2 and 4 hours after the beginning of the recording, respectively. All patients had the CE recorders disconnected after checking the passage to the colon or battery exhaustion (approximately 10 hours). CE movies were displayed on the CE platform with RAPID™ software version 8.0 (Medtronic); thereafter, GTT, SBTT, and completion rate of the small bowel examination were calculated (Figure 1). Only three experts performed the imaging reading to ensure the reproducibility and quality of the examination. The same CE protocol was performed throughout the study period.

From the CE database, patients with technical failure of CE, including accidental removal of the sensor/recorder, and those who had a previous surgery of the small intestine were excluded from the study because their SBTT cannot be analyzed.

The baseline characteristics of the patients are presented as mean ± standard deviation (SD) or number and percentage. We explored variables contributing to the transit time using simple and multiple regression models. We presented the coefficients and the P values of the abovementioned explanatory variables. Patients were divided into the following groups according to age: <44-year (young adults), 45–64-year (middle aged adults), 65–74-year (young-old), and >75-year age groups (elderly) (19). They were also classified according to their BMIs: <18.4 (underweight), 18.5–24.9 (normal range), 25–29.9 (overweight), and >30 kg/m2 groups (obese) (20). Diagnoses were categorized into normal, erosion, angioectasia, or ulcer, stenosis, polyp or tumor, and the others. To explore the variability of transit time within individuals, we depicted the histograms of the standard deviations of stomach and small intestine transit time among those who completed CE multiple times. We also compared the characteristics between the participants with CE retention and completion. In this comparison, we performed Fisher’s exact test. Statistical analysis was performed with SAS statistical software (version 9.4, SAS Institute, Cary, NC, USA). A P value <0.05 was considered statistically significant. 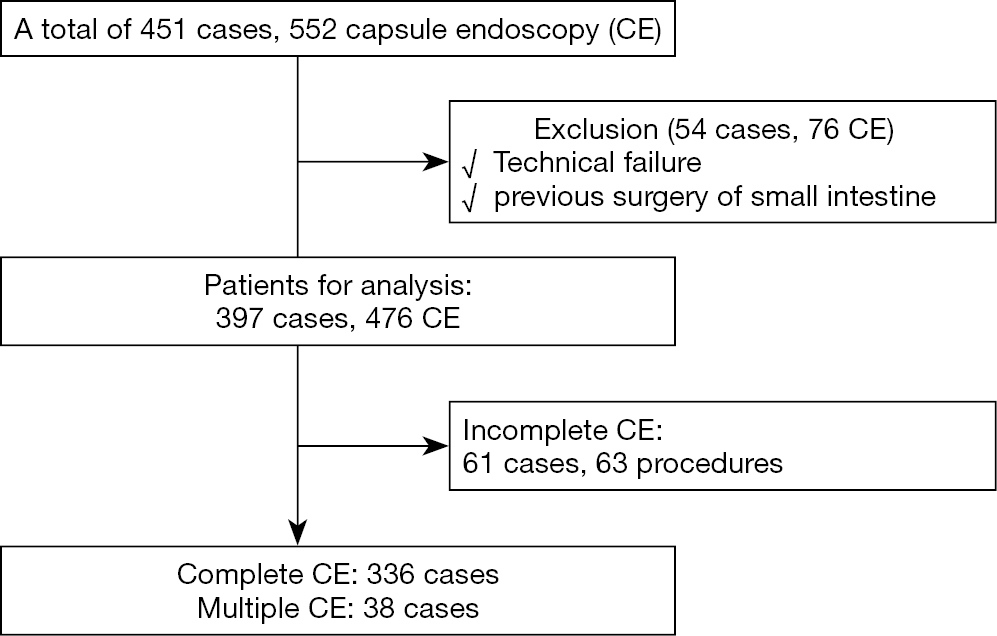 Figure 2 Patients’ enrollment flowchart. Among 451 patients who underwent capsule endoscopy, 397 patients were enrolled in this study for the analysis of small bowel transit time (SBTT). Capsule retention was observed in 61 cases (63 procedures). SBTT could be analyzed in 336 cases with completed CE; of these, 38 cases had multiple (2- 7) CE procedures. CE, capsule endoscopy. 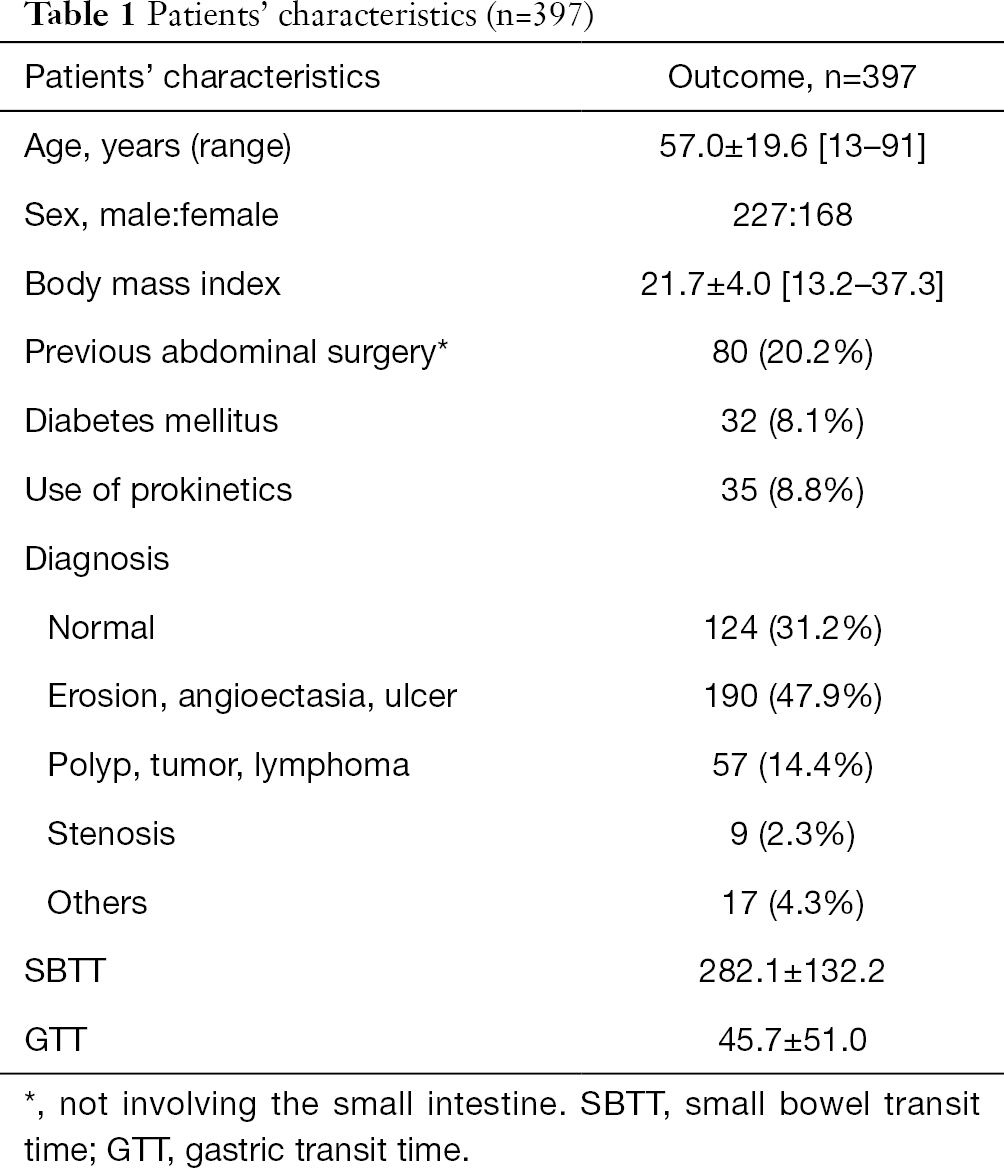 Factors contributing to SBTT of CE were analyzed in 337 patients through univariate and multivariate analyses (Table 2). Among various factors, aging (65–74-year age group and ≥75-year age group: 85.1 (45.6–124.5) and 104.7 (63.5–145.9) min, respectively, in the multivariate analysis), and small bowel stenosis [127.0 (0.3–253.6) min], were calculated as factors extending SBTT. Other factors including sex, BMI, comorbidity of diabetes mellitus, previous abdominal surgery, and use of prokinetics, did not have significance. 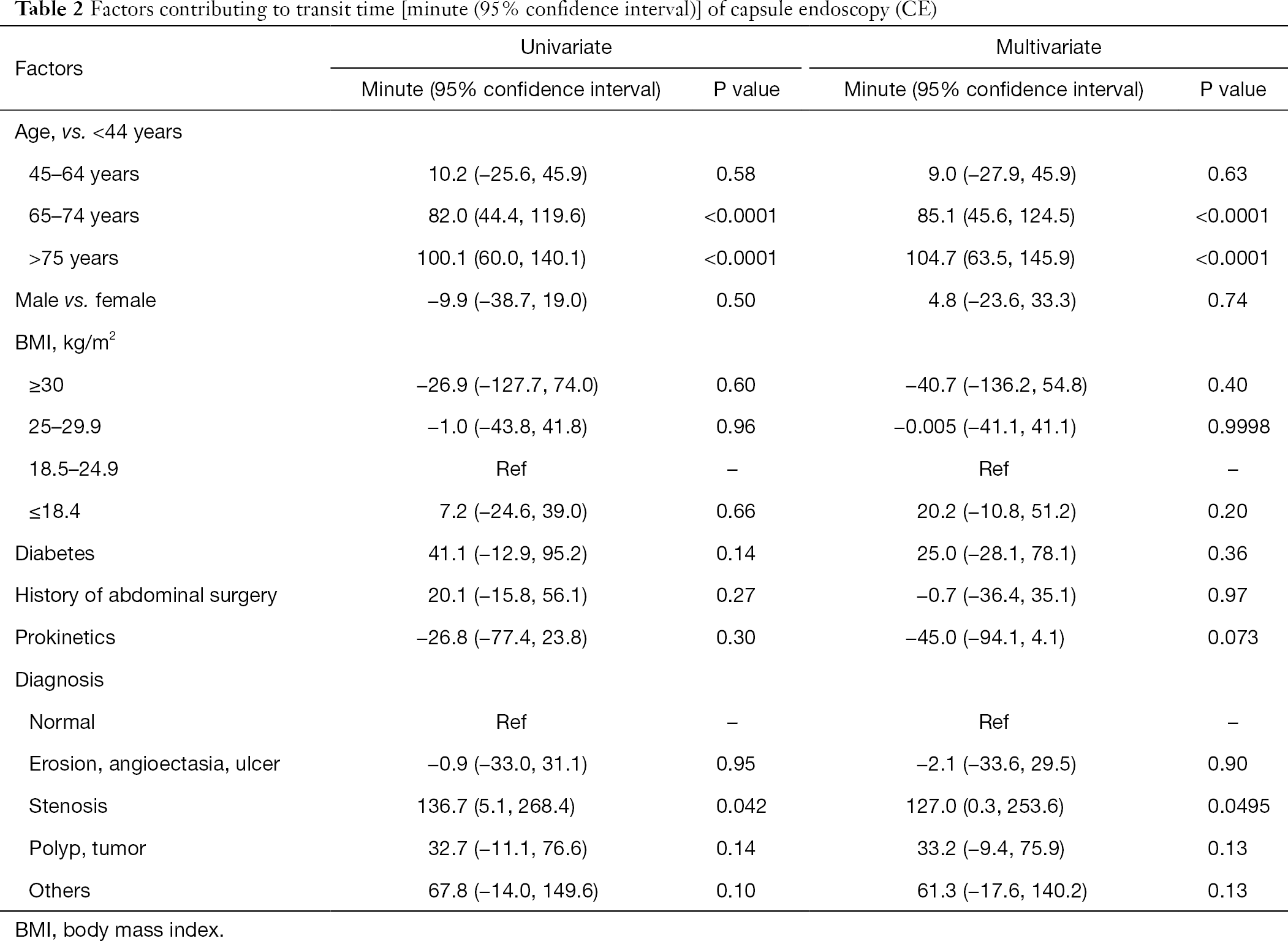 We illustrated the intra-individual variability of SBTT in a histogram of 38 patients who underwent CE multiple times (Figure 3). In SBTT, the mean and SD of the intra-patient variations were 97.966 and 81.99 min, respectively. In contrast, in GTT, they were 32.508 and 41.53 min, respectively.

Figure 3 Histogram variabilities within patient for SBTT and GTT. In SBTT, the variability presented a mean of 97.966 [SD (standard deviation of the variability) 81.99] min, whereas, in GTT, the mean and SD values were smaller [32.508 (SD: 41.53) min]. SBTT, small bowel transit time; GTT, gastric transit time.

CE retention was only related to small intestinal lesions

Comparison of patients’ characteristics between the CE retention and CE completion groups is presented in Table 3. Only CE diagnosis was significantly different between the two groups, even though one-fourth of the patients with CE retention (15 out of 61) did not have any lesions in the small intestine (normal with CE). 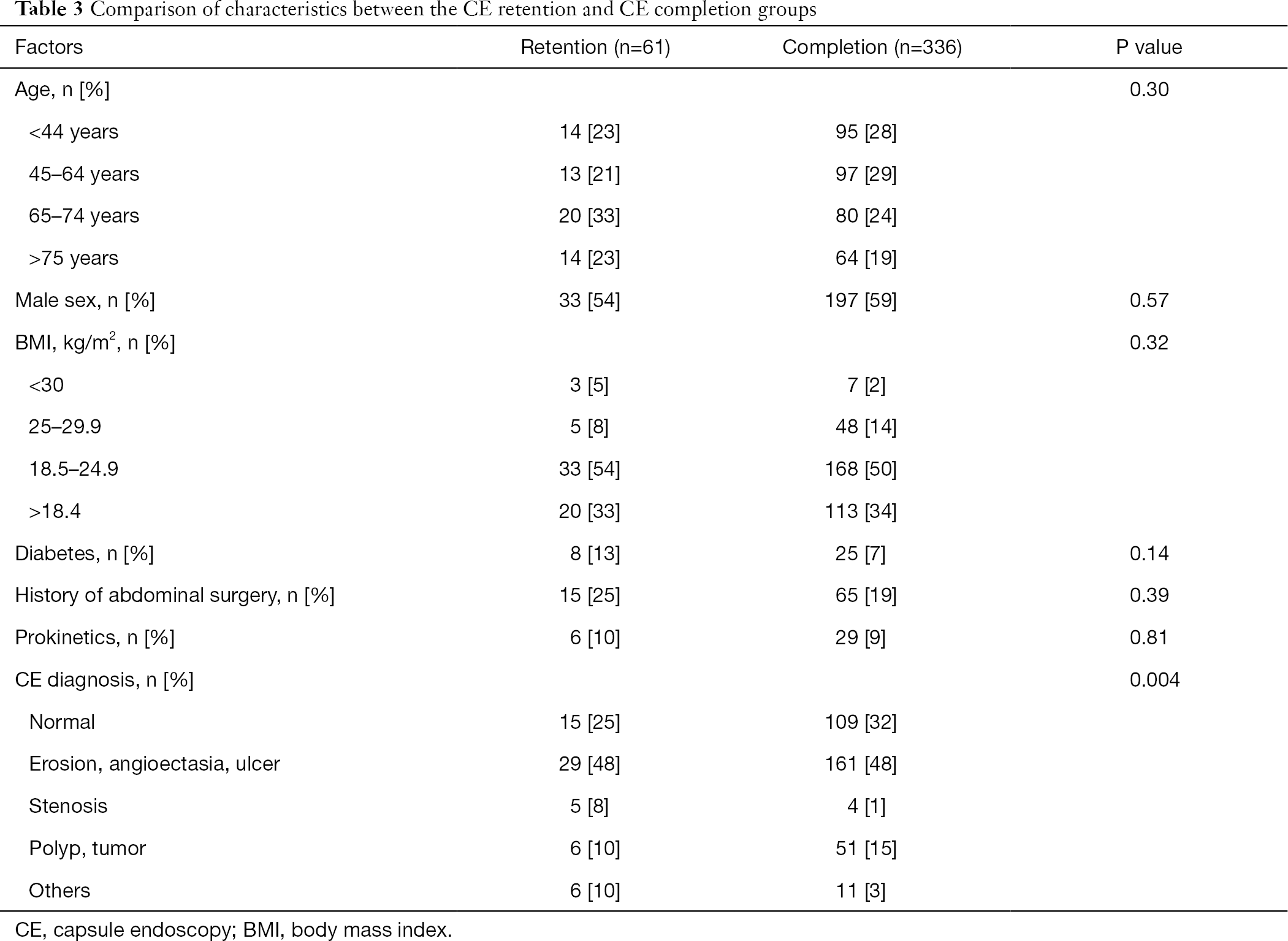 In our study, among the various factors, aging and small intestinal stenosis were found to be the contributing factors extending SBTT. Each factor prolongs SBTT by a mean of 82.0 min (65–74 years), 100.1 min (>75 years), and 136.7 min (stenosis), respectively, in the univariate analysis. Meanwhile, intra-individual difference of SBTT should not be ignored. The SD of SBTT was calculated as 97.966 min, which is comparable to the effect of each abovementioned factor. The SD of GTT was also remarkable. Therefore, we consider that the result of SBTT and GTT in CE should be interpreted with more attention to the intra-patient difference. In fact, coefficient of variation of intra-individual difference of SBTT was reported to be 30.2% in healthy controls at 1 month (21).

The completion rate of the CE procedure depends on gastrointestinal motility to propel the device through the esophagus, stomach, small intestine, and into the colon during the battery’s lifespan. A systematic review revealed a completion rate of 83.5% with a standard 8-hour battery (22). Our study result (completion rate, 86.8%) is similar to that of the previous report. However, in our comparison of the CE retention and CE completion groups, only the final CE diagnosis was significantly different. One-fourth of the patients with CE retention had normal findings in the small intestine, and in such patients, multiple factors may have caused the CE retention; however, in this study, no factors other than aging had significance.

In summary of previous reports and our results, SBTT has remarkable intra and inter individual differences compatible to the effect of factors affecting SBTT. This means that the influence of each factor affecting SBTT is not always strong or motor function of the small bowel may not be susceptible to damage caused by changes of the general condition investigated in this study. Orr et al. (23) reported that the motor function of the smooth muscle of the gut remains largely unimpaired.

Our study has several limitations that should be acknowledged. First, we did not perform CE on healthy individuals who did not have complaints. True intra- and inter-individual differences of SBTT should be analyzed in this population, and compared with that of patients. Second, gastrointestinal transit is important for nutrient absorption and controlling glucose homeostasis (24); therefore, a comparison of SBTT between fasting and non-fasting states needs to be investigated in future studies. For that purpose, a wireless motility capsule can be effective in recording luminal pH, temperature and pressure, under near-normal physiologic conditions with non-fasting state (21). A wireless motility capsule has already shown to be comparable to radiopaque markers, and scintigraphy (25,26). Rao et al. (26) reported that SBTT in healthy controls was 3.8 [3.2–4.7 (25th–75th percentiles)] hours, which was not different from that in constipated patients. Sarosiek et al. (25) also reported that SBTT in healthy controls was not significantly different from that in patients with gastroparesis [4.5 (3.6–5.5) vs. 4.6 (4.0–5.9) hours]. Finally, this is a single-center and small-scale study with a retrospective design, thus, the condition of prokinetics usage could not be uniformed. Further studies should focus on the abovementioned issues. Although our results and previous reports support the negative view, i.e., that small intestinal motility can be maintained even in the disease state and that intra-individual SBTT difference hinders accurate assessment, if the disease specific SBTT is clarified, CE can be used as a tool for motility diagnosis and may support early diagnosis. Furthermore, condition-specific motility (e.g., fasting, non-fasting, or stressful conditions) also supports to elucidate the complex and varied function of small intestine.

In conclusion, aging and small bowel stenosis may affect SBTT. Moreover, the difference of intra-individual SBTT is remarkable; therefore, the results of SBTT analysis should be interpreted carefully.

Funding: Supported by the JSPS Grants-in-Aid for Scientific Research, No. 18K15805.

Ethical Statement: The authors are accountable for all aspects of the work in ensuring that questions related to the accuracy or integrity of any part of the work are appropriately investigated and resolved. The study was approved by the Niigata University Review Board (2018-0276).