Epilepsy is one of the most common chronic neurological disorders, and approximately one-third of patients with focal epilepsy have persistent seizures despite adequate treatment with anti-epileptic drugs. Surgical resection is recognized as the powerful treatment method for drug-resistant focal epilepsy with a precisely delineated epileptogenic zone. However, surgical resection is not feasible for patients in whom the epileptic foci reside in the eloquent cortex of the brain (1,2). In particular, surgical resection can be at high risk of causing irreversible neurological impairments for patients with motor seizures arising from the primary motor cortex (3,4). Over the past few decades, the therapeutic role of deep brain stimulation (DBS) has been reported in patients with refractory seizures. While the anterior nucleus of the thalamus has been proven to be a promising target for focal drug-resistant epilepsy, especially temporal lobe epilepsy, by a multicenter, double‐blind, randomized controlled trial (5,6), the specific target for motor seizures needs to be investigated (7,8).

There is a consensus that the subthalamic nucleus (STN) plays a critical role in the cortical-basal ganglia motor loop (9,10). Clinically, STN-DBS has been successfully used to improve motor symptoms such as tremors, rigidity, and bradykinesia in patients with movement disorders (11). In recent years, some animal experiments have shown that the STN is also involved in the process of motor seizures, suggesting that the STN might be a promising site for DBS for patients with focal motor seizures (12,13). Here, we report a 5-year follow-up of a patient with drug-resistant focal myoclonic seizures treated by unilateral STN-DBS and the case report is presented in accordance with the CARE Guideline.

The patient was a right-handed 13-year-old boy without any personal or familial antecedents for epilepsy. Ictal episodes of brief, frequent myoclonic jerks of the right fingers started at 6 years old, which could progress into rhythmic clonic jerks over the right arm or hemibody. In recent years, he suffered from intermitted epilepsia partialis continua despite optional poly-antiepileptic drug therapy. Obvious weakness of the right arm and slight weakness of the right lower limb were detected. MRI showed subtle atrophy in the left frontal and central regions. Interictal EEG showed suspected low amplitude spiking in the left frontocentral area, but no clear findings on ictal EEG due to massive muscle artifacts were observed. Magnetoencephalography (MEG) revealed dipole clusters over the left central area (Figure 1). In summary, a seizure onset zone involving the left primary motor cortex was suspected. Unilateral STN-DBS for this patient was designed to treat epilepsia partialis continua.

Figure 1 Pre-operative MRI and MEG findings. (A) Subtle atrophy of left lateral primary motor cortex on the MRI slice. (B) Spikes (red circle) on the left central area in sensor space could be detected (left), which were in line with the estimation of the magnetic field patterns (middle, green arrow). It showed that the dipole clusters (red clusters) were over the left central area (right). MEG, magnetoencephalography.

One DBS lead (model 3389; Medtronic) with four platinum-iridium cylindrical surface contacts of 1.27-mm diameter and 1.5-mm length were spaced 0.5 mm apart and implanted into the left STN in 2013. Contacts 0 and 3 were the lowermost and uppermost contacts, respectively. The DBS lead targeted the dorsolateral area of the STN. Based on the classical anatomical location of the STN, stereotaxic coordinates of the STN were refined by direct visualization in the individual T2-weighted MRI. LEAD-DBS software (www.lead-dbs.org) was used to reconstruct the DBS lead (14). In brief, the postoperative MRI was linearly coregistered with the preoperative MRI. The results of the coregistrations were manually adjusted and refined for the patient. Then, the coregistered MRI scans were nonlinearly normalized into the standardized MNI stereotactic space to reconstruct contact locations. The location of each electrode’s contact was thereby registered in MNI space (Figure 2). The subdivisions including the motor, the associative and the limbic area of the STN were displayed using DISTAL atlas (DBS Intrinsic Template Atlas) (15). 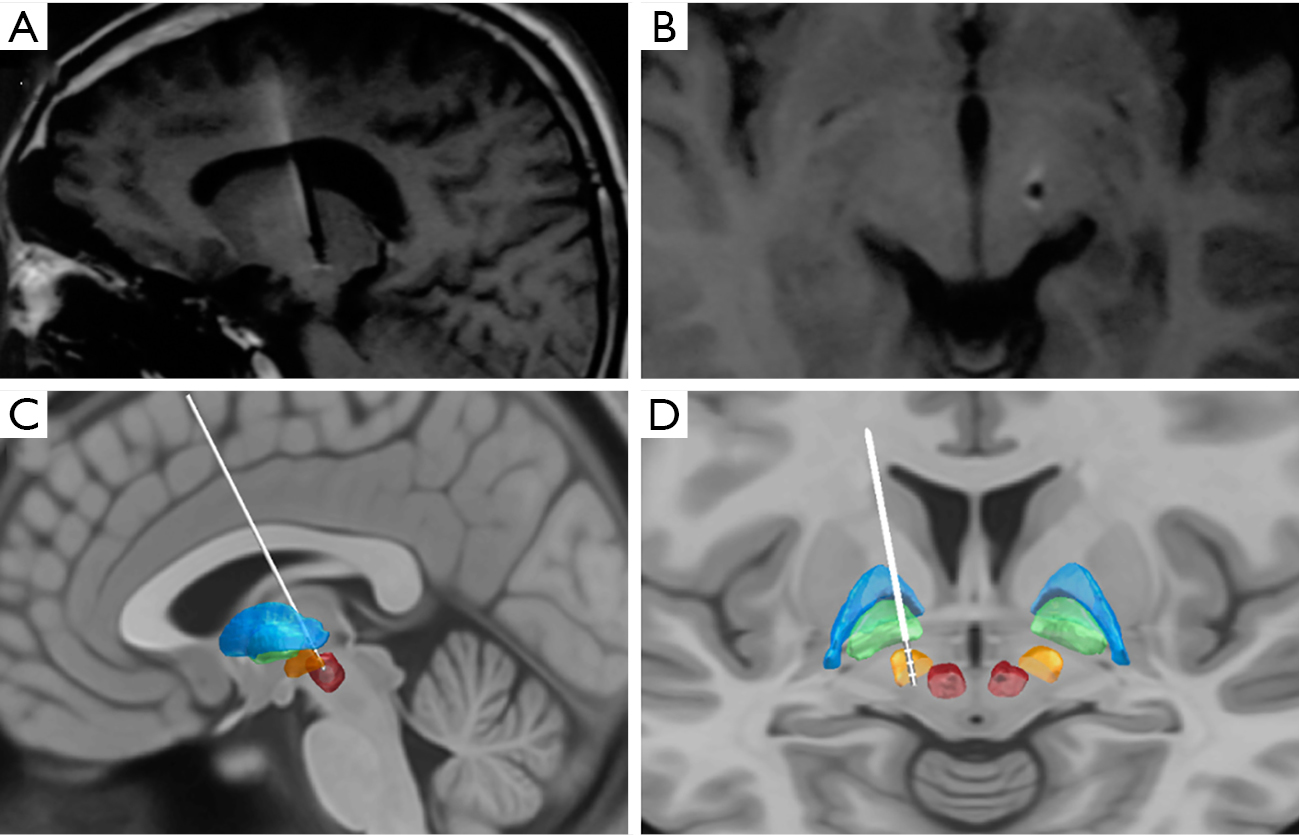 Figure 2 The artifacts in MRI slices indicate the trajectory of the implanted DBS lead in sagittal (A) and axial (B) views and the corresponding reconstructions of the DBS lead located in the dorsolateral part of the STN in the three-dimensional display (C,D). The STN, red nucleus, globus pallidus internus and external globus pallidus are labeled yellow, red, green and blue, respectively. DBS, deep brain stimulation; STN, subthalamic nucleus.

The STN was continuously stimulated after 3 months of permanent implantation of the DBS lead. Further adjustments of the stimulation parameters were scheduled if clinical worsening was reported at every 12-month follow-up visit. Seizure frequency, epilepsy severity, and life satisfaction were evaluated at each visit and compared with those of the baseline period (three months preceding surgery). At the final follow-up 5 years after the procedure, the patient experienced efficacious improvements in seizure frequency, seizure severity, and life satisfaction (Figure 3). DBS began with bipolar, unilateral stimulation with a current of 0.5 mA, a frequency of 130 Hz, and a 90 µs pulse width (at contact 0−, 2+). The patient experienced an accidental DBS interruption at 21 months after initial stimulation. To obtain a better outcome, two monopolar configurations with frequencies of 33 and 160 Hz (2-C+, 90 µs) were applied at 24 and 36 months, respectively. After the initiation of STN-DBS, the mean percentage reductions in disabling seizure frequency compared to baseline were 50%, 40%, 70%, 90%, and 75% at each corresponding 12-month follow-up over the 5-year period. Accordingly, the epilepsy severity scores (Worst, 10) were 4, 5, 4, 1 and 2, respectively, and the life satisfaction scores (Best, 10) were 7, 6, 8, 9 and 8 on a scale from 1 to 10. 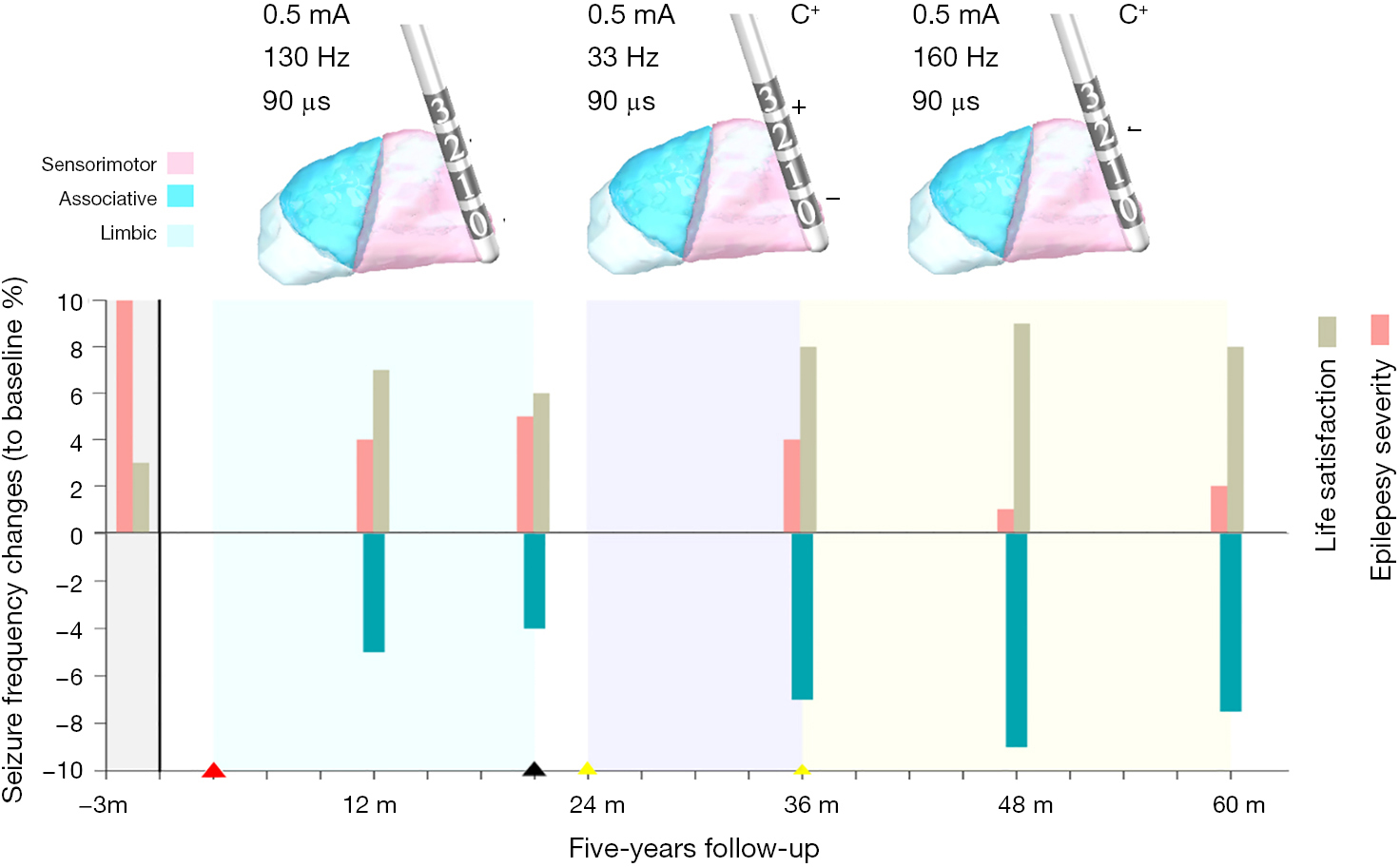 This study was approved by the Institutional Review Board Committee in accordance with the ethical standards of the Declaration of Helsinki, and informed consent was obtained from the patient.

Because available anti-epileptic drugs have failed to control seizures and remarkable impairment of motor function is foreseeable if resection surgery is performed, the patient in this study underwent STN-DBS to treat motor seizures. The five-year long-term clinical outcome demonstrated the stable therapeutically modulatory effects of high frequency stimulation (HFS) of the STN. In line with the decreased seizure frequency and severity, quality of life also improved dramatically. To date, only a few patients with motor seizures who have been treated by STN-DBS have been reported. In 2001, Benabid and his colleagues first reported that HFS of the STN was performed in five patients suffering from medically intractable seizures, and a 67% to 80% reduction in seizure frequency was observed in three of the patients with focal seizures originating from the central area (16). Another study showed that bilateral monopolar STN-DBS reduced the intensity and frequency of seizures by 50% in a patient with progressive myoclonic epilepsy (17). Thus, together with the previous research, our data provide further evidence that STN-DBS has a good effect on cases of focal motor seizures.

The mechanism of the action of STN-DBS for motor seizures is unclear. In a prior study (19), we showed that high-frequency stimulation of the anterior nucleus of the thalamus could desynchronize focal and large-scale epileptic networks and thereby reduce seizure generation and propagation. We thereby speculate that HFS-STN could modify pathological cortical hypersynchronization of the motor cortex and therefore could reduce seizure activity.

Overall, our report provides new evidence that the STN is a potential target for the treatment of focal motor epilepsy, which might offer an option for patients with drug-resistant motor seizures.

The authors would like to thank Wei Du, Xiaoxia Zhou, Yuanyuan Piao, Yanran Li, and Di Wu for the technical assistant.

Ethical Statement: The authors are accountable for all aspects of the work in ensuring that questions related to the accuracy or integrity of any part of the work are appropriately investigated and resolved. This study was approved by the Institutional Review Board Committee in accordance with the ethical standards of the Declaration of Helsinki, and informed consent was obtained from the patient.