Cleft palate (CP) results from failure of embryonic palate shelf apposition and fusion at the midline during embryogenesis (1) and is considered to be caused by the individual and combined effects of genetic and environmental factors (2,3). Epithelial-mesenchymal transition (EMT) of the medial-edge epithelium/midline epithelial seam (MEE/MES) is a crucial process of palatal shelf fusion during palatogenesis (4,5). Thus, any imbalance in MEE/MES cell proliferation and apoptosis, or dysfunction of EMT, may lead to CP formation during palatal shelf fusion (6). In mice, the embryonic palatal shelf first grows vertically in the oral cavity from embryonic gestation day 12.5 (E12.5) to E14; then, at E14.5, the palatal shelves are elevated to the horizontal position and contact each other to complete initial palatal fusion (6). However, the detailed mechanisms regulating palatogenesis remain unclear. Although microRNAs (miRNAs) and/or long non-coding RNAs (lncRNAs) are increasingly being recognized as playing important roles in the development and pathogenesis of several diseases, the regulatory mechanisms by which miRNAs and/or lncRNAs directly or indirectly interact during palatal shelf fusion remain elusive.

Salmena’s research group recently proposed the competing endogenous RNA (ceRNA) hypothesis, which suggests that lncRNAs can “sponge” miRNAs to impair their activity by using shared miRNA response elements (MREs), resulting in the upregulated expression of target genes (7). Subsequent studies have also demonstrated that lncRNAs contain MREs and can act as ceRNAs to compete with mRNAs for the same binding sites on miRNA, consequently influencing multiple biological processes. For example, lncRNA H19 acts as a ceRNA for miR-138 and miR-200a to modulate the expression of multiple genes involved in the EMT (8). Liu et al. (9) further showed that the AEG-1 3'-untranslated region (UTR) functions as a ceRNA to induce EMT in human non-small cell lung cancer cells through the regulation of miR-30a activity. Nevertheless, how lncRNAs, when acting as ceRNAs or miRNA sponges, regulate miRNA in palatal fusion remains unknown.

To clarify this issue, the current study conducted high-throughput sequencing on RNAs and small RNAs obtained from CP embryos of pregnant C57BL/6J mice treated with all-trans retinoic acid (ATRA) (10), which were then compared to control embryos. We analyzed the aberrantly expressed RNA sequencing profiles for the ceRNA hypothesis to identify a new ceRNA network associated with the development of CP. 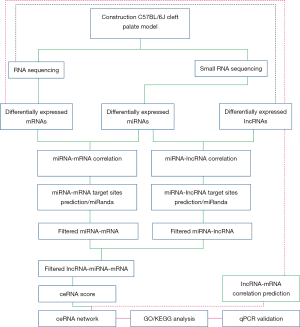 After palatal shelf tissues of the ATRA-untreated and ATRA-treated embryos (E14.5) were harvested, they were immediately photographed using a Leica M8 digital imaging system camera for morphological observation. The palatal shelf tissues were then embedded in paraﬃn and sectioned in either the coronal plane. After this, 4 µm paraﬃn sections were stained with hematoxylin and eosin (H&E) for morphological analysis.

Total RNA for miRNA sequencing was extracted from embryonic palatal shelf tissues (n=6, 3 ATRA-treated samples vs. 3 control samples) and a small RNA library was created with TruSeq Small RNA Sample Prep Kits (Illumina, San Diego, CA, USA) according to the manufacturer’s protocol. The library quality was checked with an Agilent 2100 Bioanalyzer, and 50-bp single-end sequencing was performed according to the instructions of the Illumina HiSeq X platform (Illumina, San Diego, CA, USA). Reads without a 3' adapter and insert tag, and those shorter than 15 nt and longer than 41 nt were filtered from the raw data, and the clean reads were obtained. The miRNA expression level in both the ATRA-exposed group and the control group were assessed for the 3 biological and 3 technical replicates.

For the primary analysis, these RNAs were aligned and then subjected to a BLAST (11) search against Rfam v.10.1 (http://www.sanger.ac.uk/software/Rfam) (12) and GenBank databases (http://www.ncbi.nlm.nih.gov/genbank/). The known miRNAs were identified by aligning against the miRBase v.21 (http://www.mirbase.org/) (13). Based on the hairpin structure of a pre-miRNA and miRBase database, the corresponding miRNA star sequence was also identified. Aberrantly expressed miRNAs were identified (P<0.05) and predicted using miRanda software (14), under the following parameters: S ≥150 ΔG ≤−30 kcal/mol and strict demand strict 5' seed pairing. 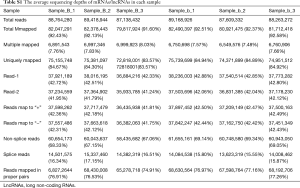 To compare the expression level of a gene across different samples (n=6, 3 ATRA-treated samples vs. 3 control samples), read counts obtained from the RNA‐seq data were normalized as FPKM. For each RNA, we calculated the Pearson correlation coefficient of its expression level for that of each differentiated miRNA/lncRNA/mRNA. A correlation coefficient between miRNA and lncRNA/miRNA and mRNA/lncRNA and mRNA smaller than 0.05 with an absolute value of correlation greater than 0.7 was considered to have potential relevance.

If lncRNA can regulate miRNA and the miRNA can regulate an mRNA, the lncRNA may act as a ceRNA. According to the miRNA-target pair prediction, the prediction of the ceRNAs process was as follows. First, ceRNAs were predicted using ceRNA scores, which were calculated as reported previously (17,18). Second, ceRNAs were predicted using expression levels. We selected the ceRNA-related pairs according to the expression levels of the lncRNA-mRNA and miRNA-target pairs (19). Third, the results of the ceRNA score and expression levels were integrated to predict the ceRNA.

In order to predict the ceRNA candidate genes involved in biological processes and signaling pathways, we performed Gene Ontology (GO) and Kyoto Encyclopedia of Genes and Genomes (KEGG) analyses to assess its functions. For the coding genes with a ceRNA relationship, the hypergeometric distribution test was used to calculate the significance of differential gene enrichment in each GO or KEGG term. The calculated result returned a P value of enrichment significance, and a P value <0.05 indicated that differential gene enrichment occurred in the GO or KEGG term.

Construction of the ceRNA network

According to the prediction of ceRNAs, shared miRNA numbers were sorted from high to low, and pairs with fewer than 3 shared miRNAs were filtered out (20). Then, ceRNA networks were constructed for embryo palatal shelves from both control and ATRA-treated mice.

To validate the RNA-seq data, qPCR was conducted using 6 individual samples, 3 control, and 3 ATRA-treated. Each sample was subjected to 3 technical replications for qPCR. The qPCR primers used in this study are shown in Table 1. The miRNA, lncRNA, and mRNA expression levels were analyzed as described previously (21). 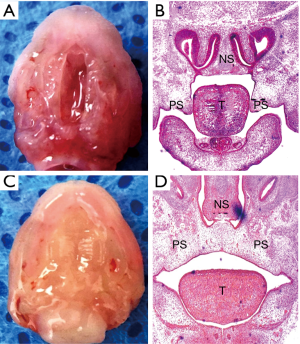 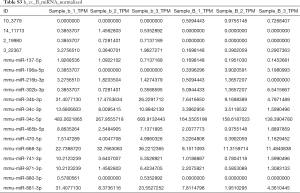 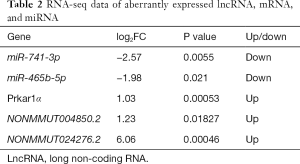 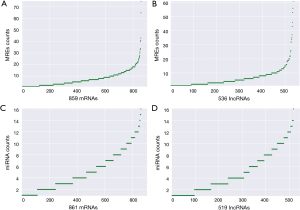 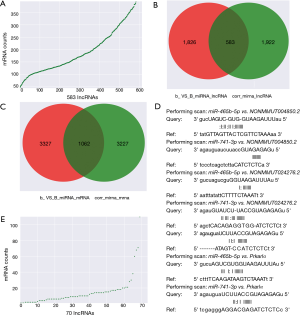 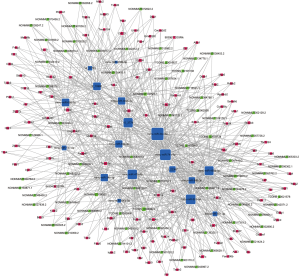 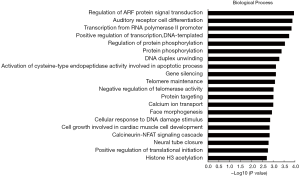 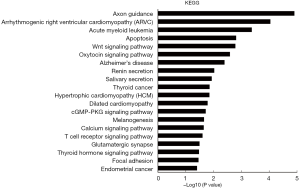 The ceRNA hypothesis proposes a novel molecular, multiple-level gene regulation mechanism that figures significantly in pathological processes (7). However, our understanding of the molecular mechanisms that allow lncRNAs to act as ceRNAs in the palatogenesis of CP is still limited. In our study, we systematically analyzed sequencing data between E14.5 embryos from control and ATRA-treated mice as a CP model. Bioinformatics analyses of the aberrantly expressed RNAs between the groups led us to speculate that the NONMMUT004850.2/NONMMUT024276.2-miR-741-3p/miR-465b-5p-Prkar1α ceRNA network may be associated with the development of CP.

Prkar1α is located at chromosome 17q24 and encodes a regulatory subunit of protein kinase A (PKA) that regulates neural crest cell formation, migration, and differentiation during embryonic development (24). Embryonic cranial neural crest (CNC) cells undergo complex molecular and morphological changes in order to form the vertebrate skull, and nearly three quarters of all birth defects, including CP, result from defects in craniofacial development (15,25). cAMP-mediated growth control in embryonic palatal development may be further modulated by endogenous prostaglandin and/or catecholamine, which depresses palatal cAMP levels (26,27). Previous studies show that cAMP levels increase before palatal fusion, which is coupled with increased PKA activation. In addition, PKA activity decreases to baseline after palatal fusion (26,27). In the present study, we discovered that NONMMUT004850.2/NONMMUT024276.2 acts as a ceRNA for miR-741-3p/miR-465b-5p to modulate the expression of Prkar1α, which results in the negative regulation of PKA activity, thereby blocking palatal fusion.

Despite our findings, it should be noted that our study is still preliminary in nature, and thus further research is needed to completely elucidate the ceRNA-regulation relationship of gene alterations occurring during CP formation. In addition, our sample size is relatively small, and the palatal shelves have been obtained directly from embryonic tissues. Therefore, it is possible that the target tissue could have been contaminated with samples of surrounding tissue. Another limitation is that we cannot exclude the effect of ATRA and its endogenous small molecule metabolites on the experimental results. We expect to integrate an analysis that identifies lncRNAs for a ceRNA network, which can help to further deepen our understanding of this level of lncRNA-dependent post-transcriptional regulation.

In summary, by constructing and functionally analyzing lncRNA-related networks based on the ceRNA hypothesis, we identified a NONMMUT004850.2/NONMMUT024276.2-miR-741-3p/miR-465b-5p-Prkar1α ceRNA network that is potentially associated with palatogenesis and the formation of CP, and thus merits further study.

Funding: This research was funded by the National Natural Science Foundation of China (grant No. 81571920).

Ethical Statement: The authors are accountable for all aspects of the work in ensuring that questions related to the accuracy or integrity of any part of the work are appropriately investigated and resolved. The guidelines and protocols for these experiments were approved by the Ethical Committee of the Medical College of Shantou University, Shantou, Guangdong, China (SUMC2015-106).