Malignant tumors are among the most horrible diseases of the 21st century, and lung cancer is the most commonly diagnosed cancer and the leading cause of cancer death (1). Most lung cancer diagnoses (85%) are non-small cell lung cancer (NSCLC) (2), including lung adenocarcinoma. The 5-year survival estimates for NSCLC range from 73% for stage IA disease to 13% for stage IV disease (3). The increasing morbidity rates of lung adenocarcinoma has led to a relative flood of research.

HSPA2 is a variant in the HSP70 family and it is an essential in spermiogenesis. In oncology research, HSPA2 was first reported in renal cell carcinoma (4). Several studies have shown that HSPA2 plays important roles in the cell growth and proliferation of hepatocellular carcinoma, nasopharyngeal carcinoma, esophageal squamous cell carcinoma, NSCLC, pancreatic ductal adenocarcinoma, colorectal carcinoma and breast carcinoma (5-10). Increased expression of HSPA2 was significantly related to a shorter overall duration of survival in patients with stage I-II carcinoma (7).

Eight-five clinical pathology specimens of lung adenocarcinoma tissue and matched adjacent nontumor tissue were collected from the Department of Thoracic Surgery, the First Affiliated Hospital, School of Medicine, Zhejiang University with the approval of Research Ethics Committee of the First Affiliated Hospital, College of medicine, Zhejiang University. The procedure was conducted in accordance with the 1964 Declaration of Helsinki and its later amendments or comparable ethical standards. All patients had given signed informed consent. The specimens of adjacent nontumor tissue for each patient were obtained more than 3 cm from carcinoma tissue.

We used human lung adenocarcinoma cell lines (including A549, H1975, and H292), human bronchial epithelium, and human embryonic lung fibroblasts (MRC-5) for our experiments. All cell lines were acquired from the Cell Bank of the Chinese Academy of Sciences (Shanghai, China). They were cultured at 37 °C in a humidified atmosphere (Thermo Fisher Scientific) in the presence of 5% CO2 - 95% air and were grown in RMPI-1640 supplemented with 10% Fetal Bovine Serum (FBS).

The cells were plated in six-well plates and allowed to attach overnight. With the application of lipofectamin2000, HSPA2 siRNA sequenced and overexpressing plasmid was transfected into A549 and H1975 cell lines to knockdown or overexpress the HSPA2 gene respectively.

After the cells being transfected as needed, colony formation assay was performed in six-well plates with cell culture for 14 days without disturbance. We washed the media in triplicate with phosphate-buffered saline (PBS) solution followed by 0.1% crystal violet for 15 minutes.

We seeded A549 and H1975 cells (being transfected as needed) into 96-well plates at 80% to 90% subconfluence. MTT was added to the medium for 3 hours of incubation after 24, 48, and 72 hours of incubation. The cell culture medium was then mixed with 150 µL of dimethyl sulfoxide for 10 minutes, and the optical absorbance was measured at 490 nm.

We performed transfection in culture dishes and labeled ER with ER-Tracker™ Green dyes (Invitrogen Life Technologies) according to the instructions of the manufacturer. Washed the cell for three times with PBS for 5 minutes and visualized at room temperature using a Carl Zeiss microscope (Carl Zeiss AG, Jena, Germany). The exposure times between treatments were consistent and the brightness and contrast of the images were adjusted using Adobe Photoshop software (Adobe Systems Inc., San Jose, CA, USA) for presentation.

We performed flow cytometry according to standard protocols of DNA staining solution (Multisciences Biotech Co., Ltd., China). After transfection, the cells were collected and washed with PBS. The cell pellets were obtained by centrifugation and the supernatant was discarded. Then added 1 mL of DNA staining solution incubated the cell samples for 30 minutes at room temperature in the dark for the flow cytometry.

The cells were sonicated in the proper amount of radioimmunoprecipitation assay buffer, and 20 µg of protein was resolved on 12% polyacrylamide sodium dodecyl sulfate gels. The proteins were then transferred to polyvinylidene difluoride membranes, which were blocked with 3% bovine serum albumin in Tris-buffered saline-Tween 20. The membranes were incubated successively with the corresponding primary antibodies and secondary antibodies. Finally, the proteins were visualized with chemiluminescent horseradish peroxidase substrate.

All experiments were performed in triplicate, and the results were analyzed with GraphPad Prism 7.0. P values of less than 0.05 were considered to indicate statistical significance.

We applied qRT-PCR to measure tissue specimens from 85 patients. Every column represented one patient, and the A/C ratio indicated the ratio of PCR results between group A (adjacent nontumor tissues) and group C (lung adenocarcinoma tissues). The qRT-PCR results of demonstrated that HSPA2 showed greater expression in lung adenocarcinoma tissues than in the adjacent nontumor tissues (Figure 1A). 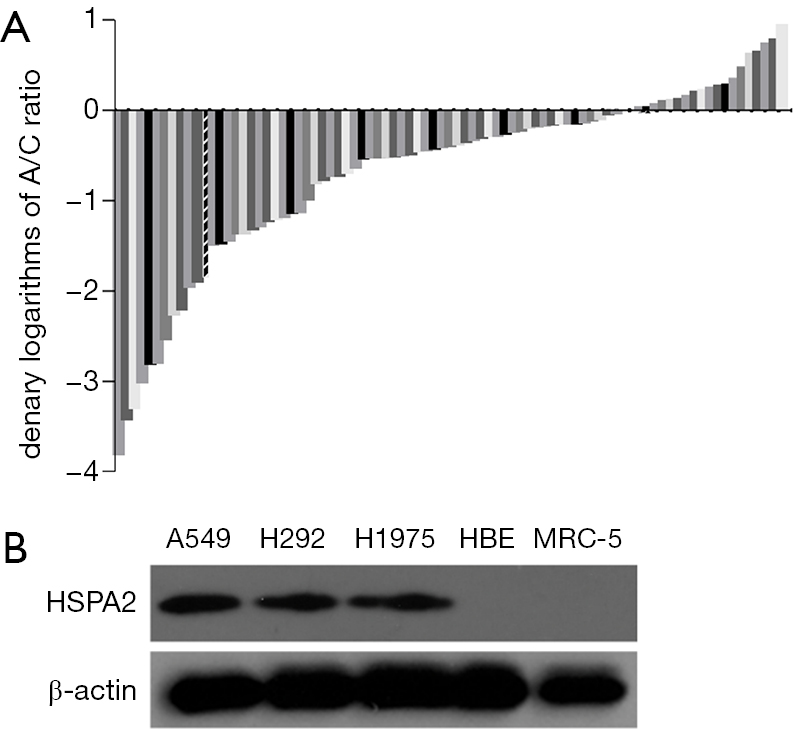 Western blotting showed that the lung adenocarcinoma cell lines had a significantly higher expression level of HSPA2 than the human bronchial epithelium and MRC-5 cell lines (Figure 1B).

We found siRNA sequence no.1532 to be the most effective, so it was applied in the subsequent experiments (Figure 2A). 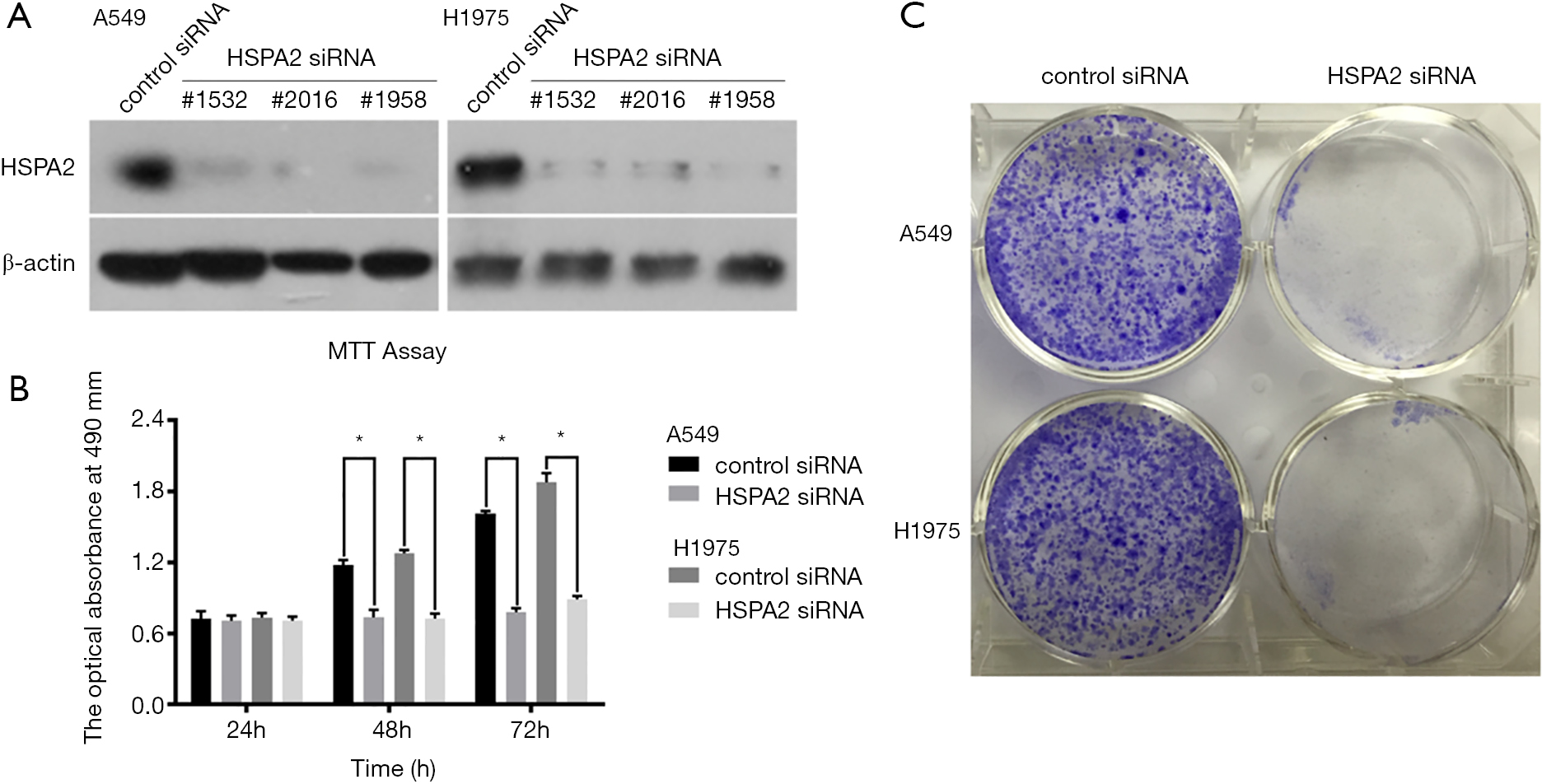 Knockdown of HSPA2 reduced proliferation of A549 and H1975 cells

MTT assay and colony formation assay demonstrated that knockdown of HSPA2 reduced the proliferation of A549 and H1975 cells (Figure 2B,C).

The results of flow cytometry show that G1 phase cell increased and G2 phase cell decreased in the HSPA2 knockdown group of A549 and H1975 cell lines (Figure 3A). These results indicated that knockdown of HSPA2 induced G1/S phase cell cycle arrest. 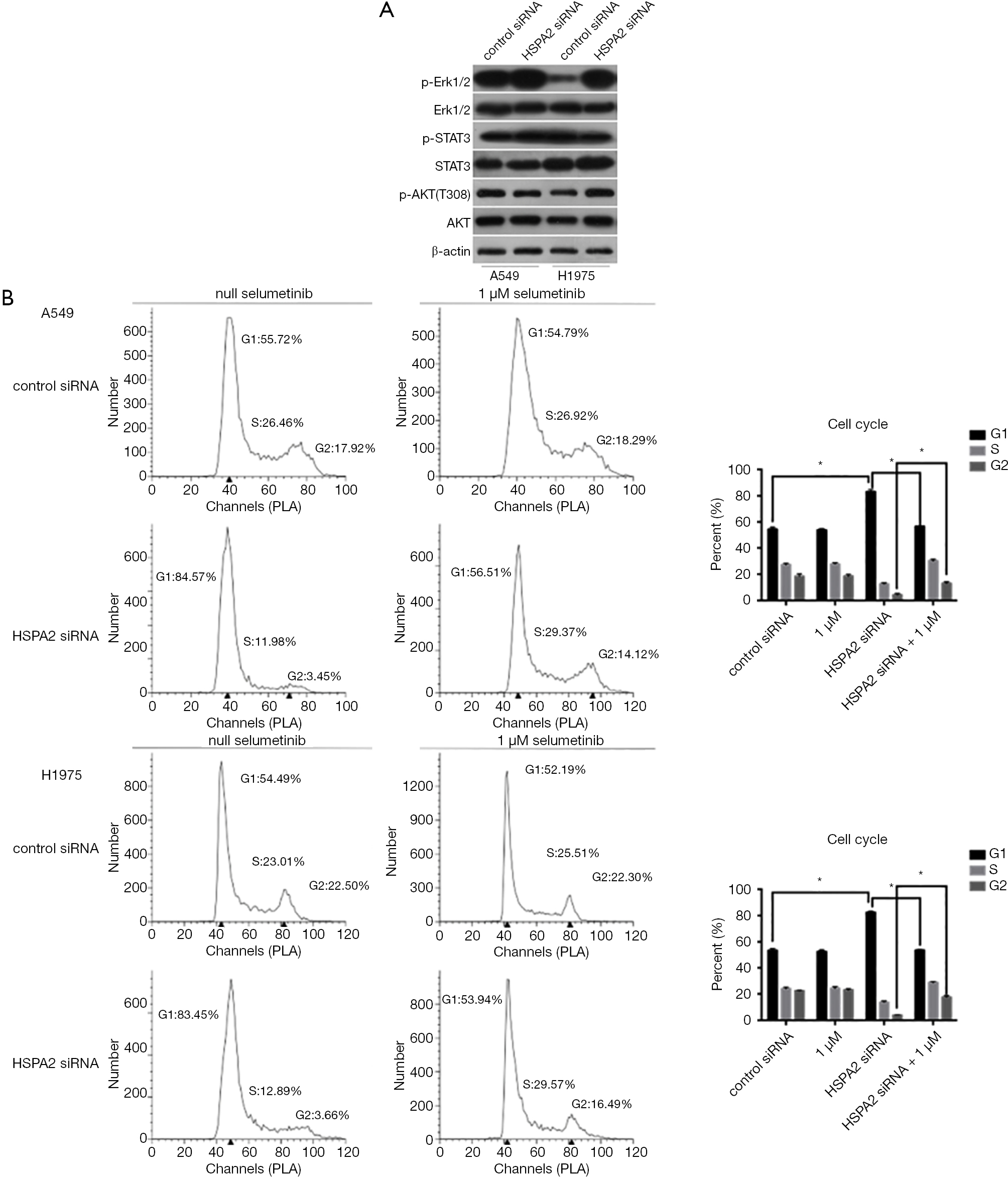 We found an increased phosphorylation level of Erk1/2 protein in both A549 and H1975 cell lines. The total protein level, relative protein level of STAT3, and the Akt pathway remained stable (Figure 4A). We presumed that HSPA2 could participate in the Erk1/2 cell signal transduction pathway. Activation of the Erk1/2 pathway induces cell cycle arrest in lung adenocarcinoma. 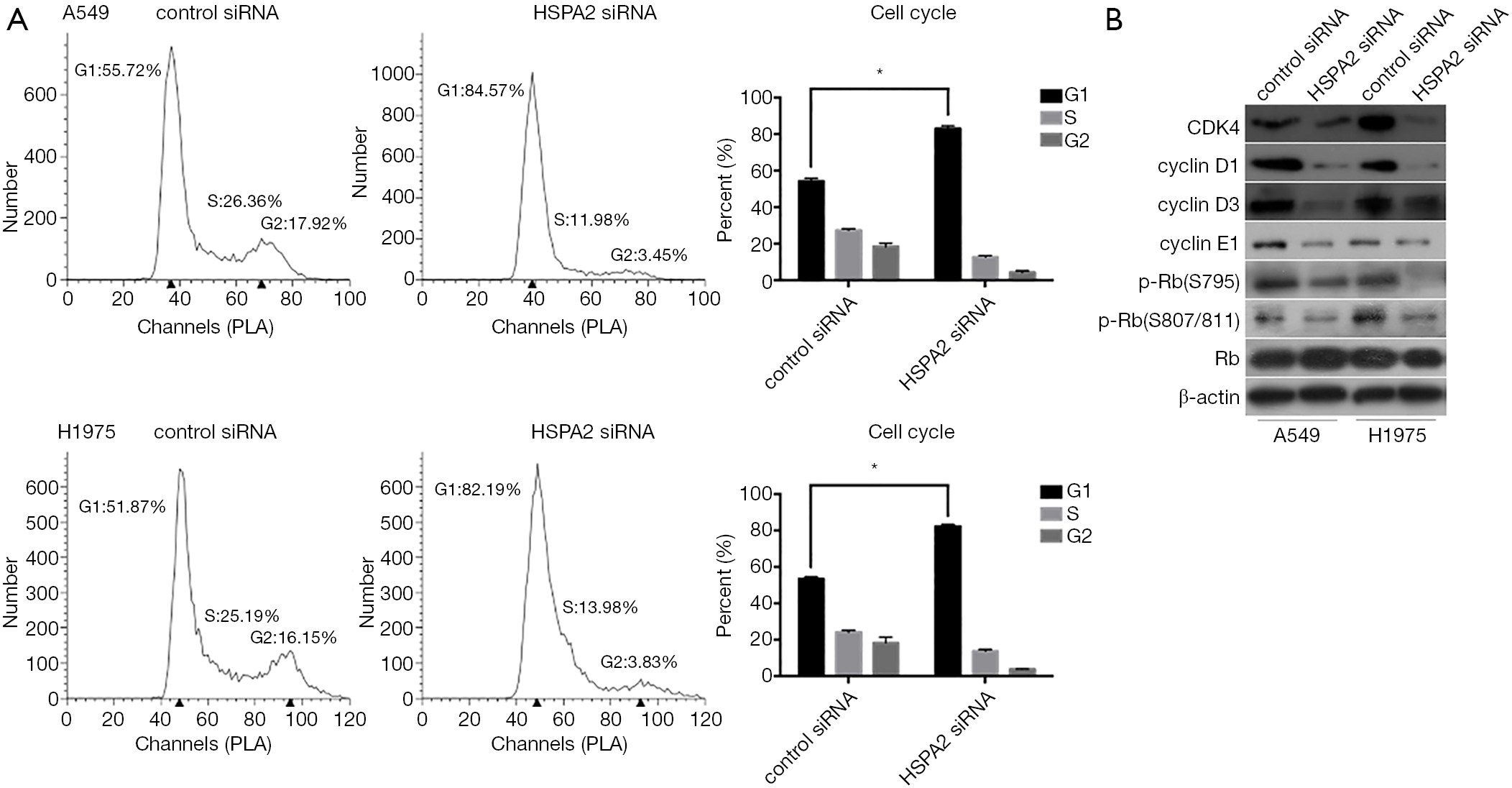 Figure 4 Knockdown of HSPA2 activated Erk1/2 signaling transduction pathway. (A) Downregulation of HSPA2 related with Erk1/2 signaling transduction pathway and c-Myc protein. Western blot analysis of proteins in pathways involved in cell cycle regulation with A549 and H1975 cells transfected with HSPA2 siRNA and control cells. (B) Verification of the finding that HSPA2 knockdown triggers the activation of the Erk1/2 pathway. Cell cycle profiles of A549 and H1975 cells with or without HSPA2 knockdown or Selumetinib (1 µM) and error bars were determined by flow cytometry. *, P<0.05.

Knockdown of HSPA2 enhanced ER stress in A549 and H1975 cells

We hypothesized that organelles may participate in the process of G1/S phase arrest induced by HSPA2 knockdown. We thus selected a specialized endoplasmic reticulum (ER) marker to stain the ER of A549 and H1975 transfected by HSPA2 siRNA or blank siRNA. We then observed them via laser confocal microscopy (LCM). Immunofluorescence demonstrated greater signal enhancement in the HSPA2 knockdown group than in the control group (Figure 5A), which indicates an increase in ER stress (11). These results confirmed our hypothesis. 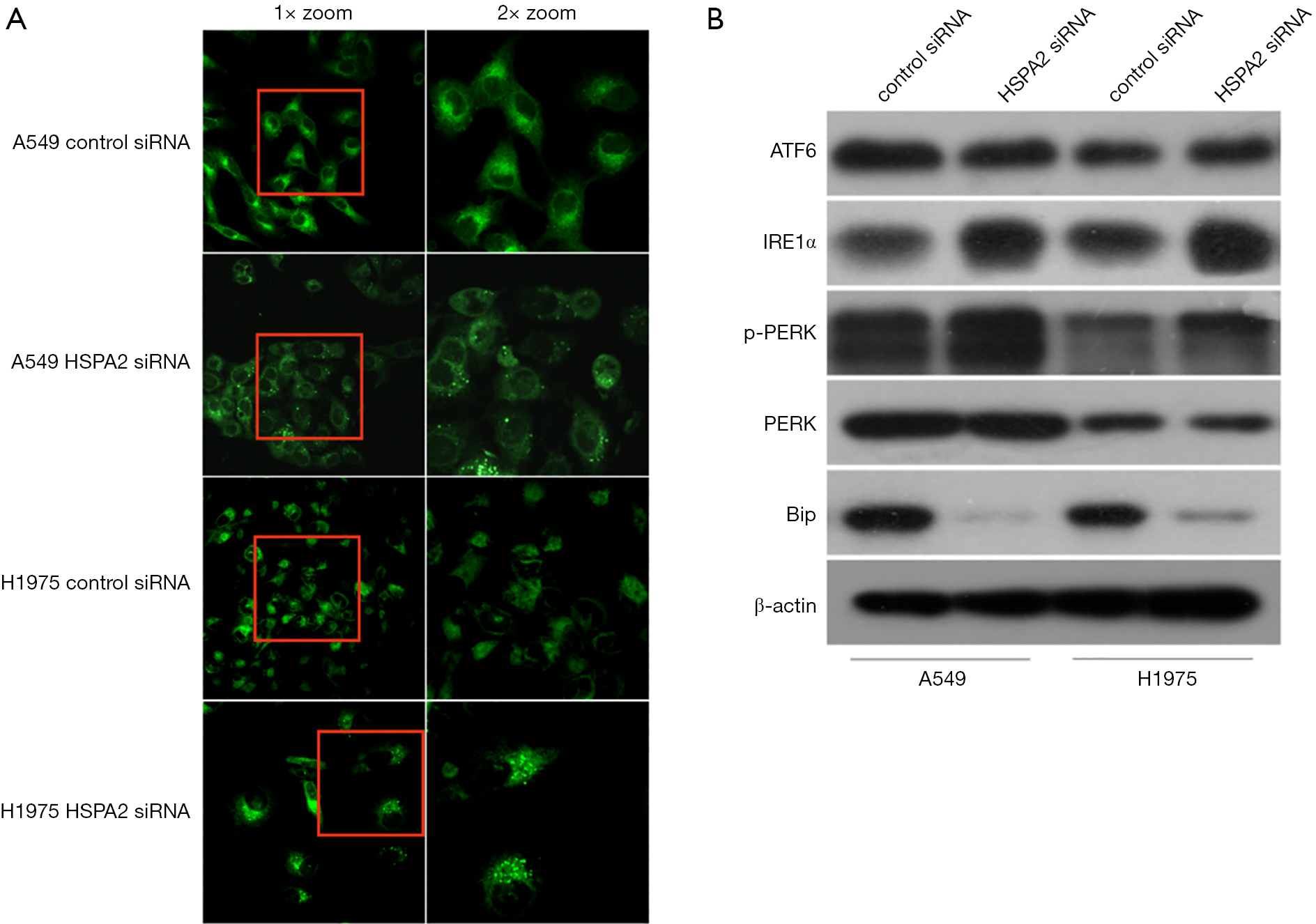 We focused the ER stress signaling pathway protein (ATF6, IRE1α, PERK) and Bip (modulin of IRE1α protein). Western blotting showed that an increase in the expression levels of IRE1α and PERK and a decrease in Bip (Figure 5B).

We observed the expression levels of HSPA2, CDK4, cyclin D1, cyclin D3, cyclin E1, p-Rb(S795), p-Rb(S807/811), p-Erk1/2, IRE1α, PERK, and Bip in the previous experiments. HSPA2 overexpressing plasmid was applied in A549 cell line. By comparing the changing protein levels in the control group (Con), the knockdown group (KD), the overexpression group (OE), and the rescue group (KD + OE), we confirmed the conclusion that downregulation of HSPA2 inhibits proliferation via the ERK1/2 pathway and ER stress in lung adenocarcinoma (Figure 6).

Molecular chaperone HSPs control protein folding to participate in the intracellular balance. Some HSPs serve as the molecular chaperones of other hyperspecialization proteins, such as signal transduction proteins and transcription factors. Some HSPs show resistance to apoptosis and participate in some cellular immune responses (14). These findings have attracted scholars to study and induced lots of clinical applications.

The largest family of HSPs is the HSPA (HSP70) family, which belongs to the human protein group (15). HSPA2 is a variant of this family. It was first found in testicular tissue and is highly expressed in pachytene stage spermatocytes in rodents. We therefore regard HSPA2 as a specific expression protein of the testes (16).

HSPA2 protein is thought to be abnormally expressed in lung alveolar carcinoma (17). The construction of HSPA2 protein directly influences its regulated function in the progression of lung cancer (18). Biomarkers (7,19,20) and polymorphism (21) analysis have been the main achievements of HSPA2 research for lung cancer, but studies of the mechanism are rare. In 2016, Chang et al. showed interaction between HSPA2 and JAG1, one of the ligands in the Notch pathway. The improved transcriptional level of JAG1 was related with HSPA2, and both participated in the process of malignant transformation of lung cancer (22). We have found no further studies of the mechanism of HSPA2 function in lung adenocarcinoma.

The proliferation of lung adenocarcinoma cell lines (A549 and H1975) decreased after HSPA2 knockdown, which was induced by G1/S phase cell cycle arrest as the expression of relative protein in the G1/S phase cell cycle changed accordingly. After downregulation of HSPA2, western blotting showed increasing phosphorylation of Erk1/2. The extracellular signal–regulated kinase ERK1 and ERK2 (ERK1/2) cascade regulates a variety of cellular processes via phosphorylation of multiple target proteins. The outcomes of its activation range from stimulation of cell survival and proliferation to triggering of tumor suppressor responses such as cell differentiation, cell senescence, and apoptosis (23). The hyperphosphorylation of Erk1/2 protein could promote cell cycle arrest by regulating p16 (24), p21 (25), and p27 (26), which are common inhibitors of G1/S cyclin-dependent kinase. The function of increasing the phosphorylation level of Erk1/2 protein in cell cycle regulation was consistent with our results.

The ER is the major site of protein synthesis and transport in eukaryotic cells and can transport abnormal proteins to the cytoplasm. Those proteins were degraded by proteasome via ER-associated degradation. A disorder of ER-associated degradation would induce ER stress and trigger the unfolded protein response. IRE1α, PERK, and ATF6 protein represent three branches of the unfolded protein response (27). Studies of ER stress in the regulation of tumor cell cycle arrest have been reported (28,29). Meanwhile, the functions of HSPs in ER stress have been frequently studied (30-34). However, the relationship between HSPA2 and ER stress remains unknown. Our study shows that upregulation level of IRE1α and PERK protein in the HSPA2 knockdown group is comparable with that in the control group. It is worth noting that the Erk1/2 cascade have a reported relationship with ER stress. Erk1/2 has been intimately linked with the IRE1α and PERK stress pathway. Erk1/2 protein activation was inhibited after ER stress and IRE1α pathway activation, but the mechanism was unclear (35). A similar phenomenon has been observed in gastric cancer cells, in which activation of Erk1/2 inhibited Bip protein in the IRE1α pathway, after which apoptosis was induced by ER stress (36).

The activation of Erk1/2 mediated phosphorylation of CHOP (downstream of the PERK pathway). This process could change the activity of its own transcriptional activation domain, subsequently changing its affinity with the binding protein and ultimately leading to changes in the gene expression profiles (37). In a study of HeLa cells, Erk1/2 also played an important role in the process of apoptosis induced by the high expression level of CHOP, and Erk1/2 also mediated the phosphorylation of CHOP (38). It remains uncertain which genes were dependent on CHOP phosphorylation and were responsible for alteration of the cellular phenotype associated with triggering the subsequent progression of cell apoptosis.Therefore, when the downregulation of HSPA2 induces ER stress, crosstalk may occur with the high phosphorylation level of Erk1/2. Erk1/2 activation leading to ER stress or ER stress happening before Erk1/2 protein phosphorylation require further study, and the relationship between ER stress and the cell cycle requires further discussion.

Ethical Statement: This study has been approved by the ethics committee of the First Affiliated Hospital of Zhejiang University in China and written informed consent was obtained from eligible guardians. The authors are accountable for all aspects of the work in ensuring that questions related to the accuracy or integrity of any part of the work are appropriately investigated and resolved.