Legionella spp. is widely known as the causative pathogen of community-acquired pneumonia, the common symptoms of which include fever, cough, expectoration, dyspnea and radiological signs. Extra-pulmonary infections due to Legionella spp. are rare. The difficulties in culture remains to be a challenge in clinical diagnosis.

Metagenomics Next-generation sequencing (mNGS) is a new technique which is increasingly used for infectious diagnosis. It allows for culture-independent identification of various pathogens in complex microbial samples and semi-quantification of pathogen loads. Now we report a case of septic arthritis caused by L. micdadei and Staphylococcus aureus unexpectedly diagnosed by mNGS.

A 54-year-old male visit the clinic of the Infectious Diseases of Zhongshan Hospital because of new-onset swelling with progressive pain in the 1st and 3rd metacarpophalangeal (MCP) joints of his right hand for 16 days. He denied any symptom of local trauma, fever, respiratory disorder or febrile illness before the onset. He had medication history of oral corticosteroid for systemic lupus erythematosus (SLE). After the onset, he increased the steroid doses without doctor’s advice. In fact, he developed progressive pain and swelling in the right elbow joint one month earlier, which was ended up with spontaneous rupture of the joint mass and discharge of dark red pus.

He had a visit to the rheumatologic clinic on the 9th day of the onset. The initial analysis detected a leukocytosis count of 13.39×109/L, neutrophil proportion of 93.1%, a slight increase in erythrocyte sedimentation rate (ESR, 52 mm/h), significant increase in C-reactive protein (CRP, 117.4 mg/L), undetected pro-calcitonin (PCT) and a similar level of autoantibodies as before (ANA 1:100, dsDNA 100 IU/mL). CT of hands showed some swelling of the 1st and 3rd MCP joints with subluxation (Figure 1). His SLE was evaluated as stable, with a possibility of infection. He was not admitted to the rheumatologic ward. The rheumatologic clinician ordered a decreased dose of corticosteroid and a normal dose of oral levofloxacin, which slightly relieved the symptoms in the joints.

The patient was admitted into the ward of Infectious Diseases on the day of the clinic. He was afebrile and normotensive. His MCP joints were swollen, tender and warmer than surrounding tissues, especially in the 3rd MCP joint. Blood tests indicated increased levels (leukocytosis count 19.79×109/L, neutrophil proportion 90.9%, ESR 78 mm/h, CRP 242.1 mg/L, PCT 0.33 ng/mL). A purulent aspirate (about 3ml in all) obtained by arthrocentesis on admission was sent to microbiological lab for conventional microbial culture and to a tertiary sequencing lab for mNGS test simultaneously (Figure 2). 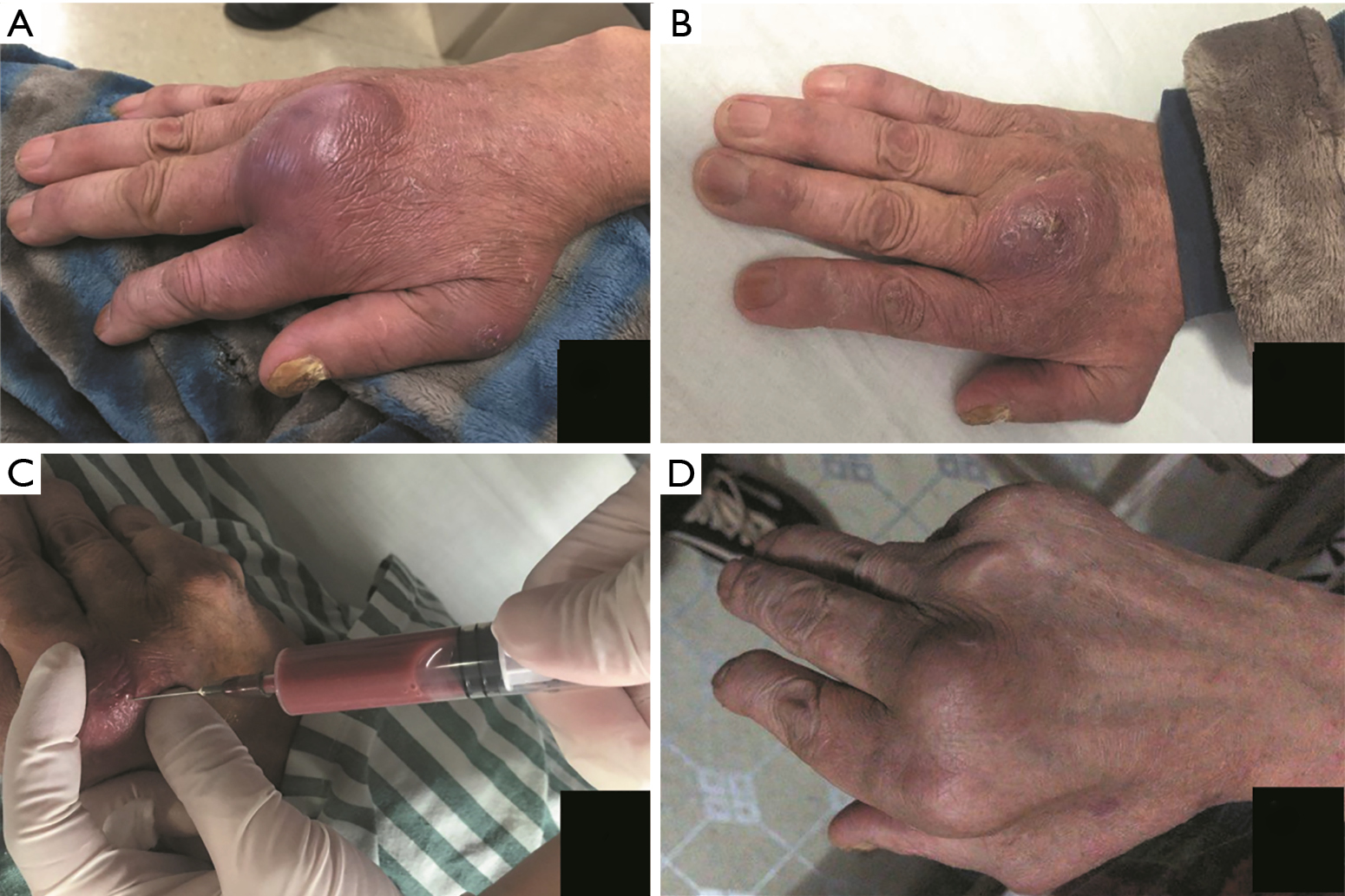 Figure 2 The patient’s 3rd MCP joint before, during and after treatment. (A) Day 0. The obviously swollen joint on admission. (B) Day 6. The swelling alleviated significantly after first arthrocentesis and treatment of oral levofloxacin. (C) Day 6. About 10 mL dark red aspirate obtained in the 2nd arthrocentesis. (D) Day 56. The joint was almost recovered. MCP, metacarpophalangeal.

Brief methods of mNGS were according to the standard protocol of the BGISEQ-100 sequencing platform (BGI, China). (I) DNA Extraction. (II) Library Construction and Sequencing. The DNA extracted was sonicated to generate 200–300 bp fragments. The fragments were then end-repaired, added specific barcodes, amplified by PCR and purified. Quality control was performed with the Agilent 2100 Bioanalyzer (Agilent Technologies, Santa Clara, CA, USA). Reads of short (<35 bp) and low-quality were filtered out. Human host sequences (mapped to the human reference genomes hg19) were eliminated. (III) Data processing and analysis. High-quality sequencing data were aligned to the Microbial Genome Database. The mapping sequences were then advanced analyzed. The reference genomes were downloaded from the National Center for Biotechnology Information (

Twenty-four hours later, we received the mNGS report. A large number of standardized strict mapping reads (SDSMR) of L. micdadei and small numbers of SDSMR of S. aureus, L. dumoffii and L. pneumophila were detected. The SDSMR numbers of L. micdadei, S. aureus, L. dumoffii and L. pneumophila were 63,169, 361, 300 and 31; with genomic coverage rate of 76.05%, 2%, 0.4143% and 0.1958%, respectively (Figure 3). In consideration of microorganism genome’s rupture into short fragments and the sequence homology among different Legionella species, the non-micdadei Legionella reads were assumed as micdadei reads that have mapped to non-micdadei reference sequences. In addition, several skin colonizers such as Propionibacterium acnes and coagulase negative staphylococcus were also present in the results (4 and 1, respectively), yet were considered as contamination due to the small numbers of reads and mis-mapping due to the sequence homology among different staphylococcus. The following 16s rRNA sequence analysis confirmed the presence of L. micdadei. Oral levofloxacin treatment was continued after mNGS test. 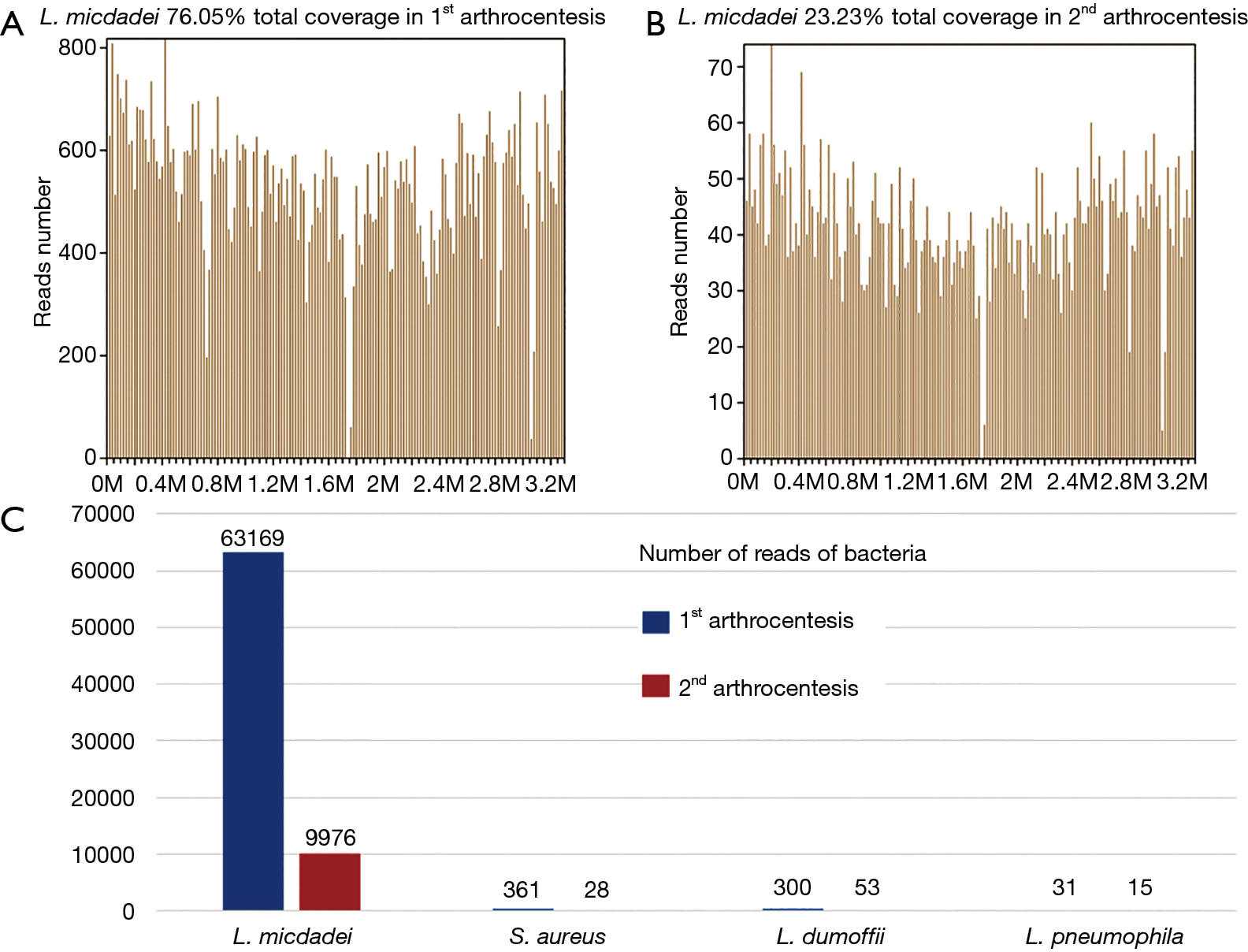 Sixty hours later, a growth of methicillin-sensitive S. aureus (MSSA) in standard culture medium was reported. The S. aureus was sensitive to levofloxacin. In consideration of the patient’s economic situation, we did not add new antibiotics although levofloxacin is not a first-choice for S. aureus. Oral levofloxacin treatment was continued.

Twenty-four hours later, mNGS reported Legionella species and S. aureus again. Compared to the previous report, most of the bacteria had decreased significantly in sequencing reads (Figure 3), which were consistent with the alleviation of symptoms and improvement of laboratory test results. Propionibacterium acnes and coagulase negative staphylococcus were negative this time. 54 h later, the conventional culture reported a single MSSA again. The patient was prescribed with another 60 days’ oral levofloxacin. Eight weeks later, the patient revisited the outpatient clinic and was found almost fully recovered.

This report describes a case of septic arthritis caused by L. micdadei and S. aureus in an immunocompromised patient. The incidence of legionellosis has been increasing in the United States and in Europe (2-4), with a nearly 3.5-fold increase between 2000 and 2011 in the United States (3). The typical mode of transmission for Legionella is inhalation of aerosols which leads to pneumonia. Although rare in frequency, extra-pulmonary infections caused by Legionella species includes prosthetic valve endocarditis (5), pyelonephritis (6), sinusitis (7) and cellulitis (8). Legionella species may also cause wound infections due to direct inoculation and skin contamination (9,10). The majority of extra-pulmonary infections caused by Legionella species occur in immunocompromised individuals (11).

To date, ten cases of Legionella arthritis have been reported, including eight septic (12-19) and two reactive (20,21) arthritis (Table 1). However, we present the first case of septic arthritis in native joint caused by L. micdadei, accompanied with S. aureus. Our case included, 8/11 patients were immunocompromised. Of the other three cases, two were diagnosed as reactive arthritis and had pneumonia history about 2 weeks before the onset. L. pneumophila is the leading pathogen (5/11). The others are L. longbeachae (one case) (14), L. Dumoffii (one case) (15), L. micdadei (two cases, one in prosthetic joint (19) and our case of septic arthritis in native joint), L. bozemanae (one case) (16) and L. cincinnatiensis (one case) (18). Both small and large joints could be affected. Except for one 32-year-old patient, who had dived using a compressed air breathing apparatus 2 weeks before a CT detected atypical pneumonia and clinical examination detected arthritis (20), all patients were more than 50 years old. Intra-articular injection and aerosolized water therapy may be the potential risk factors. Besides SLE, we did not find other risk factors for Legionella micdadei infection. 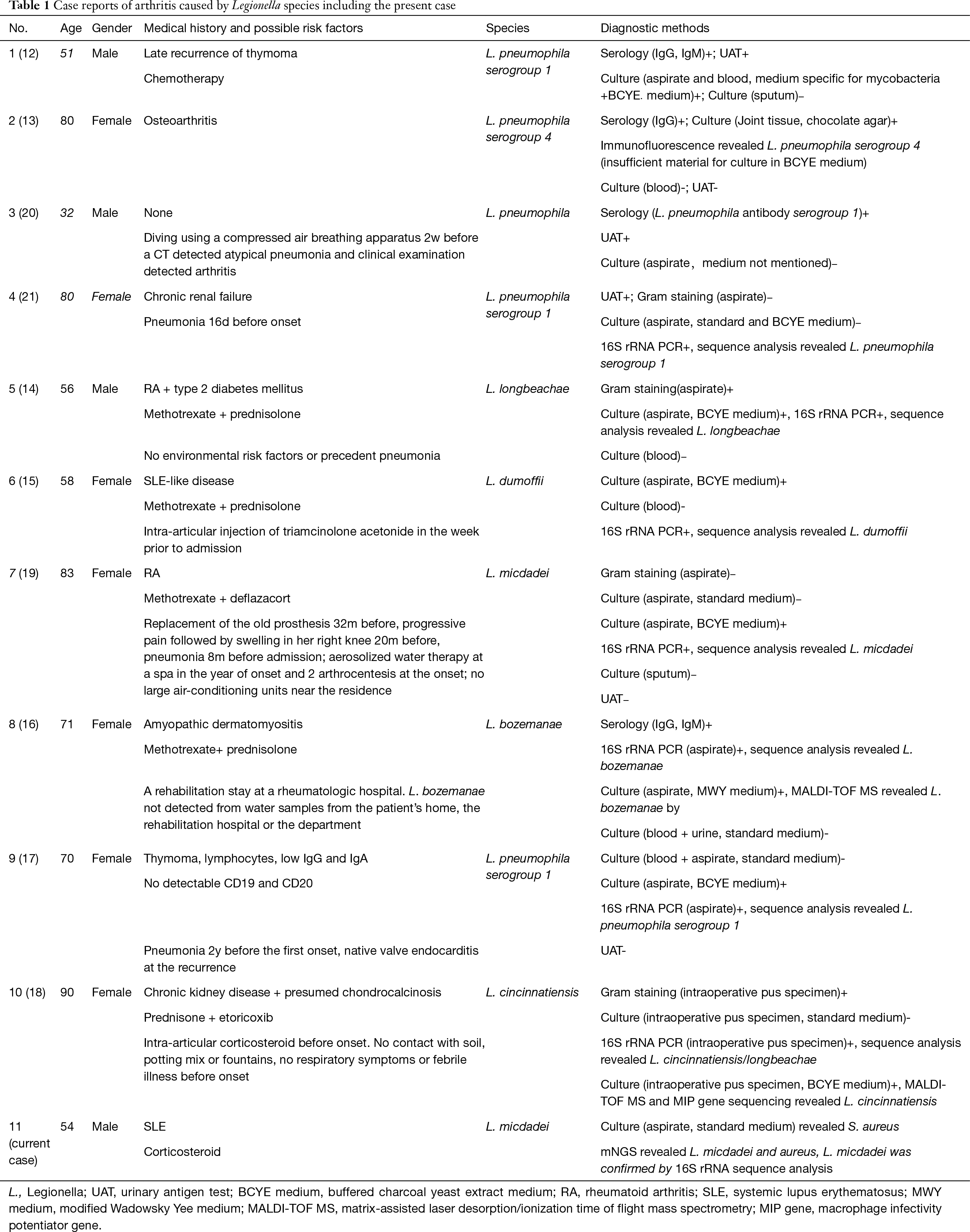 The urinary antigen test (UAT) and serum antibody examination are common methods for Legionella detection. UAT is designed for L. pneumophila serogroup 1. To a great extent, it is the availability of this test that L. pneumophila serogroup 1 had most confirmed cases. While other species do not have their specific tests and could not achieve such accurate etiological diagnosis. Serum antibody examination requires several weeks for seroconversion. Most microbiological diagnosis was established upon joint specimen culture and 16s rRNA sequence analysis. Legionella species grow on special culture media (buffered charcoal yeast extract, BCYE) instead of standard ones, impeding the detection of this pathogen in routine culture. Hence the true frequency of infection may be significantly underestimated. Interestingly, Legionella species also grew unexpectedly on other culture media, such as chocolate agar (13) and mycobacteria growth medium (12). For culture-negative infections, 16s rRNA sequence analysis may help. Since cases of Legionella infections are still few, it is hard to tell the differences on epidemiology, toxicity, pathogenicity or other biological characteristics between Legionella micdadei and other Legionella species. As mNGS gaining its popularity, it would be possible to summarize the characteristics of different Legionella species in future.

Given the single positive result in conventional culture, Legionella infections would not be taken into consideration for the patient. mNGS detected the mixed infection and identified the species, making a great supplement to conventional culture. Besides, mNGS is time-saving because it’s culture-independent. In immunocompromised patients, complex mixed infections are very common, where conventional culture-dependent methods might not be enough for etiological diagnosis. mNGS is a new technique that is increasingly used for the clinical diagnosis of infectious diseases. Theoretically, with sufficiently long reads, multiple hits in the microbial genome, and a complete reference database, most microorganisms can be uniquely identified through mNGS (22). Althrough PCR based testing other than next generation, full-genome sequencing can be used to seek viral and fungal pathogens, mNGS has its superiority in diagnosis: (I) that a single test is able to identify bacterial, viral, fungal and parasitic pathogens, (II) that it is able to identify the presence of multiple organisms, (III) that it is able to provide a relative quantification of the multiple organisms present in a single sample and (IV) that it greatly saves time, especially for the mycobacteria infection. Several case reports and clinical studies have demonstrated the use of mNGS as a promising diagnostic tool for infectious diseases (22-24). Our case is the first one in which septic arthritis was diagnosed through mNGS of the aspirate sample.

Currently, clinical surveillance of infection progression is mainly guided by clinical manifestations, routine laboratory tests and culture. However, we still need a tool to directly monitor the dynamics of the pathogen. Apart from etiological diagnosis, mNGS offers a quick way to semi-quantitively monitor the changes in pathogen loads. Thus we consider mNGS a rapid method for disease surveillance (25). Our case implies the promising potential of mNGS as an effective tool for rapid and accurate infection diagnosis and surveillance.

Sample contamination is a common problem in mNGS. There were several possible contaminating microorganisms in this study. In consideration of the high sensitivity of mNGS, the relatively small reads numbers and the sequence homology among different staphylococcus, P. acnes and coagulase negative staphylococcus were considered as contamination. This contamination mainly caused by commensal microbes on the skin surface and are also very common in culture (especially coagulase negative staphylococcus). Similarly, in sputum sample, commensal oral flora such as Streptococci and anaerobe are frequently reported. Clinicians should be familiar with the background microorganisms in various parts of human body where specimens are collected. However, sometimes commensal microorganisms and pathogens can perform mutual transformations.

In conclusion, we present the first case of septic arthritis in native joint caused by L. micdadei, accompanied with S. aureus, diagnosed through mNGS. Conventional culture may not be able to detect all the pathogens. mNGS is a good supplement for rapid and accurate etiological diagnosis and surveillance. mNGS may play an important role in complicated infections, especially in immune-compromised patients.