Preeclampsia is a multisystem disorder that is characterized by hypertension with either proteinuria or end-organ dysfunction in both previously normotensive women and chronically hypertensive women (1). The exact vasoactive molecule responsible for preeclampsia has not yet been determined, but it is widely accepted that the placenta plays a crucial role in the pathogenesis of preeclampsia and that delivery of the placenta remains the only definitive treatment (2). However, the delivery may not be in the best interest of the fetus when the gestational age is below 34 weeks, mainly because of the immaturity of the fetal lung (3). The policy of expectant management was proposed to improve neonatal outcomes; however, the course of preeclampsia, especially early-onset severe preeclampsia, which is defined as preeclampsia that occurs prior to 34 weeks of gestation, is associated with progressive deterioration of the maternal condition (4). Therefore, the tipping point in terms of the risks and benefits of expectant management must be determined.

This study was undertaken to explore the associations between preeclampsia characteristics and examine the decreased latency and poor neonatal outcomes during the expectant management of early-onset severe preeclampsia, with data stratified according to pregnancy outcome due to difficulties in evaluating different maternal and neonatal complications.

We performed a retrospective review of all 213 women with severe preeclampsia diagnosed at <34 weeks of gestation who received expectant management to prolong pregnancy and who were admitted between 2010 and 2015 at Renji Hospital affiliated with Shanghai Jiaotong University School of Medicine. This study was approved by the ethics review board of Renji Hospital affiliated with Shanghai Jiaotong University School of Medicine, and informed consent was obtained from every patient. The inclusion criteria were as follows: the diagnosis of severe preeclampsia of pregnancies was performed according to the American College of Obstetricians and Gynecologist (ACOG) criteria (1). The exclusion criteria were as follows: the condition of either the mother or fetus was unstable during the first 48 hours after admission. Specifically, this included women with eclampsia, HELLP syndrome, severe uncontrolled hypertension (defined as the inability to stabilize systolic blood pressure <160 mmHg and diastolic pressure <110 mmHg when maxed out on antihypertensive drugs), abruptio placentae, an abnormal fetal heart rate, severe oligohydramnios (defined as the deepest vertical pocket being <2 cm or an amniotic fluid index <5 cm) or reversed end-diastolic flow in the umbilical artery. Nine patients were diagnosed with severe preeclampsia before 24 weeks and still insisted on continuing the pregnancy because of sterility or recurrent spontaneous abortion. The authors are accountable for all aspects of the work in ensuring that questions related to the accuracy or integrity of any part of the work are appropriately investigated and resolved.

Prophylactic magnesium sulfate was given in the first 5 days of expectant management, intrapartum, and for 48–72 hours postpartum. Dexamethasone was given when the patient was admitted to the hospital. Maternal monitoring included blood pressure measurements every 6 hours, clinical evaluations of symptoms a minimum of two times a day, and 24-hour urine analysis twice weekly. Antihypertensive drugs such as labetalol and nifedipine were used to maintain systolic blood pressure at 155 mmHg or lower and diastolic blood pressure at 100 mmHg or lower. Intravenous nicardipine was used as a first-line treatment for women with severe hypertension (defined as systolic blood pressure ≥160 mmHg or diastolic blood pressure ≥110 mmHg). When necessary, labetalol, nifedipine, and nicardipine were used together. Blood tests included measurements of hemoglobin, platelet counts, liver enzymes [aspartate transaminase (AST) and alanine aminotransferase (ALT)], creatinine, lactate dehydrogenase, fibrinogen, D-dimers, prothrombin times, and partial thromboplastin times. These tests were performed daily, every other day, or once every three days, depending on the clinical symptoms and laboratory findings. Fetal evaluations included ultrasound evaluations of fetal growth and estimations of amniotic fluid volume at entry, umbilical artery Doppler velocimetry, fetal heart rate monitoring, and clinical evaluations of fetal movement three times a day.

Fetal and maternal complications and indications of delivery

Maternal indications for delivery during expectant management were all major maternal complications defined below, except for severe uncontrolled hypertension despite maximum doses of combined antihypertensive therapy (labetalol, nifedipine, and nicardipine), and thrombocytopenia (<100,000 cells/µL).

There was one case of maternal death, which was brain hemorrhage due to the sudden uncontrolled hypertension. The remaining 212 patients were divided into 3 groups according to fetal outcomes, which was shown in Table 1. The definition of fetal loss and live birth were as follows: fetal loss, including intrauterine fetal death, and termination of mid-trimester pregnancy due to disease severity; live birth, birth with a living child. We further divided this condition into 2 parts: <34 weeks and ≥34 weeks. Based on the indications of delivery, the 2nd group was divided into 2a and 2b. We also observed the neonatal survival rate of all 3 groups, which means the survival rate of live births during the first 28 completed days. 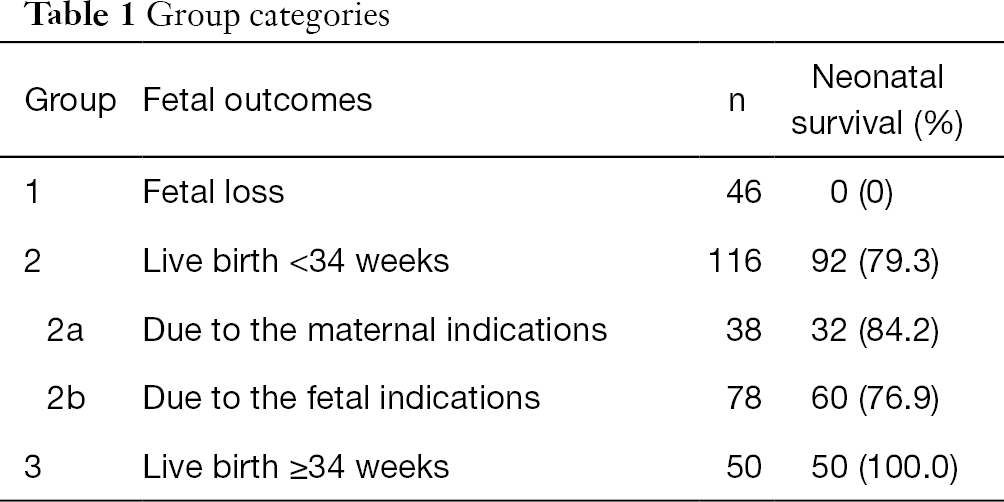 Data are presented as the average and range or percentage, as appropriate. All variables were analyzed separately. Multivariate regression analysis was performed to investigate the contributions of IUGR (5); prolongation; the gestational ages at the time of diagnosis and delivery; the platelet count; liver enzyme levels (ALT); plasma albumin; creatinine; 24-hour urine protein; doses of antihypertensive drugs; and pleural fluid and ascites for pregnancy outcomes in group 1, 2a, 2b, and 3. The remaining statistical analyses were performed by Student’s t-test and Pearson correlation analysis.

During the study period, 213 singleton pregnancies were admitted for preeclampsia and expectantly managed from 17 weeks and 0/7 days to 33 weeks and 5/7 days.

The average number of days of pregnancy prolongation days was 18.5 days. Delivery was achieved by cesarean section in 79.2% of cases. Deliveries were prompted by maternal reasons in 39.6% of cases, fetal distress in 45.3% of cases, and a combination of the two in 15.1% of cases. The 1 case of maternal death was due to brain hemorrhage because of sudden uncontrolled hypertension. There were no instances of eclampsia or severe acute renal failure among the 213 women.

Table 3 Contributions of factors to the pregnancy outcomes
Full table

where Φ is the cumulative distribution function of N(0,1).

In the same way, a condition that can be classified into group 3 is approximate to the following: 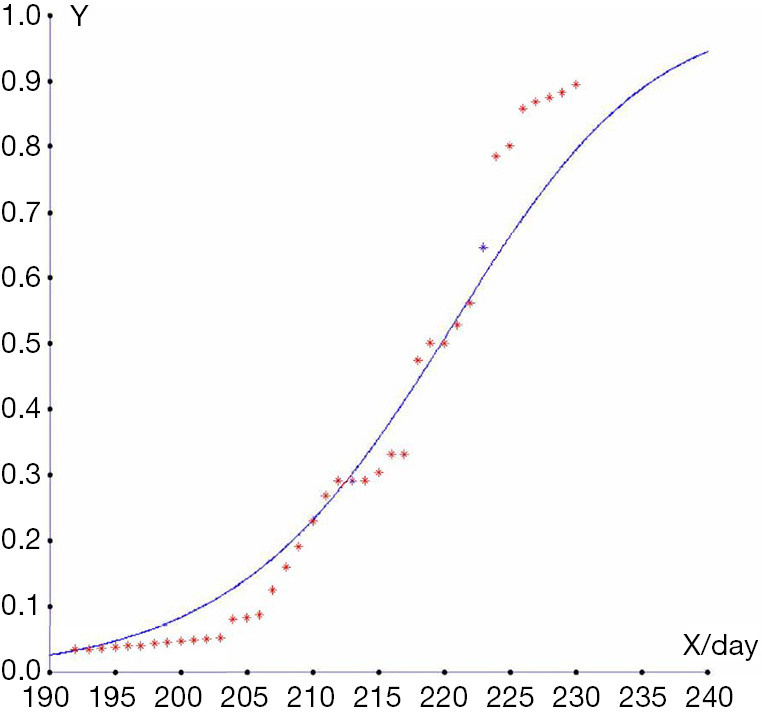 Figure 1 Possibility of classification into group 1 according to the diagnostic gestational age. Red points indicate the actual ratio. 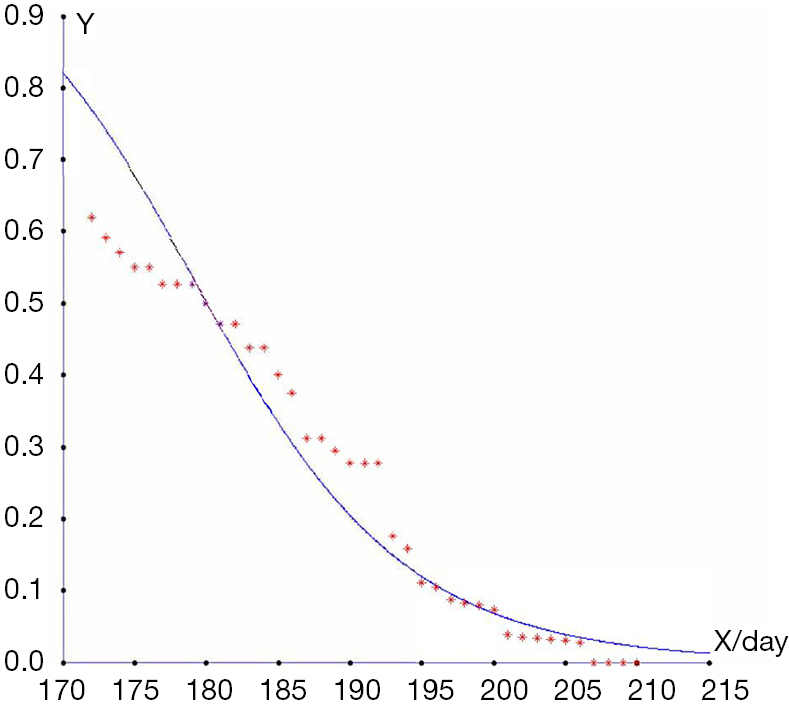 Figure 2 Possibility of classification into group 3 according to the diagnostic gestational age. Red points indicate the actual ratio.

Similar to the above analysis, the main factors in the other groups were 24-h urine protein, hydrothorax, ascites, and albumin. All the participants were divided into two groups, defined as pregnancies with or without hydrothorax and ascites (Table 4). There were significant differences in the 24-h urine protein and plasma albumin levels between pregnancies with and without hydrothorax and ascites (both P<0.05).

Studies about early-onset severe preeclampsia have usually suggested that a poor pregnancy outcome occurs in combination with poor perinatal outcomes, such as neonatal mortality, respiratory distress syndrome (RDS), bronchopulmonary dysplasia (BPD), and intraventricular hemorrhage (IVH), and with maternal complications, such as antepartum HELLP, abruption placentae, pulmonary edema, DIC, and renal insufficiency (4,6-8). Additionally, it is difficult to evaluate the severities of different types of maternal and neonatal complications. This study designed a new approach for classifying pregnancy outcomes to explore the association and latency between early-onset severe preeclampsia characteristics and influencing factors.

There are more criteria that need to be taken into account, such as IUGR and the umbilical artery. However, this method is limited in that some factors are not included. In addition, the sample size is too small to obtain accurate results.

In summary, we have found that plasma albumin level and hydrothorax and ascites should be monitored closely, as they may lead to termination of the expected management of early-onset severe preeclampsia. Given its unsatisfactory pregnancy outcomes, expectant management should be reconsidered before 25 weeks and 4/7 days of gestational age.

Ethical Statement: The authors are accountable for all aspects of the work in ensuring that questions related to the accuracy or integrity of any part of the work are appropriately investigated and resolved. This study was approved by the ethics review board of Renji Hospital affiliated with Shanghai Jiaotong University School of Medicine, and informed consent was obtained from every patient.