Post-transplant diabetes mellitus (PTDM) is a severe and increasingly frequent complication in kidney transplant recipients, which increases the incidence of cardiovascular and infectious complications and has an adverse impact on both graft and patient survival (1-3). PTDM most frequently develops in the early months after transplantation, usually within the first year (2). In kidney transplant recipients, a number of independent risk factors for PTDM have been identified, including older age, obesity, ethnicity, family history of diabetes, donor type, episodes of acute rejection, cytomegalovirus (CMV) and hepatitis C virus (HCV) infection, the use of corticosteroid, and the type of immunosuppression therapy (2,4-6). Therefore, a pre-transplant identification of patients who are at a high risk of developing PTDM would be beneficial for creating preventive strategies and improving clinical management.

The C-peptide index (CPI) is the ratio of serum C-peptide to plasma glucose levels and is used to evaluate β-cell function (7,8). CPI is strongly correlated with β-cell area as estimated by histological analysis of surgical specimens of the human pancreas (9). It has been reported that postprandial CPI is more practical for evaluating β-cell functional capacity than fasting CPI (8), and is the best predictive marker for the requirement of insulin therapy (10). Furthermore, studies have demonstrated that postprandial CPI is more related to new onset type 2 diabetes than fasting CPI and the 2-hour glucose test (11). While studies have associated CPI with diabetes, its association with PTDM has not been previously examined.

At our transplant center, all kidney transplant candidates routinely undergo a 75 g oral glucose tolerance test (OGTT) to identify glucose intolerance or pre-transplant diabetes mellitus. To evaluate the predictive power of CPI for the development of PTDM within one year after transplantation, we retrospectively analyzed 290 kidney transplant recipients with the aim of identifying the time point when OGTT CPI was most closely related to PTDM.

Selection of the population

We retrospectively identified 446 consecutive patients receiving kidney transplants in our transplant center between January 2015 and December 2017. A total of 156 patients were excluded from this study for the following reasons: pre-transplant diabetes mellitus (n=98), secondary transplantation (n=34), recipient age <18 years (n=10), or early graft or patient loss (n=11). HCV positive patients exclusions were due to the low number (n=3). Finally, 290 patients were included in this study (Figure 1). The mean age of the patients was 39.4±10.2 years, and the mean pretransplant BMI was 22.1±3.2 kg/m2. 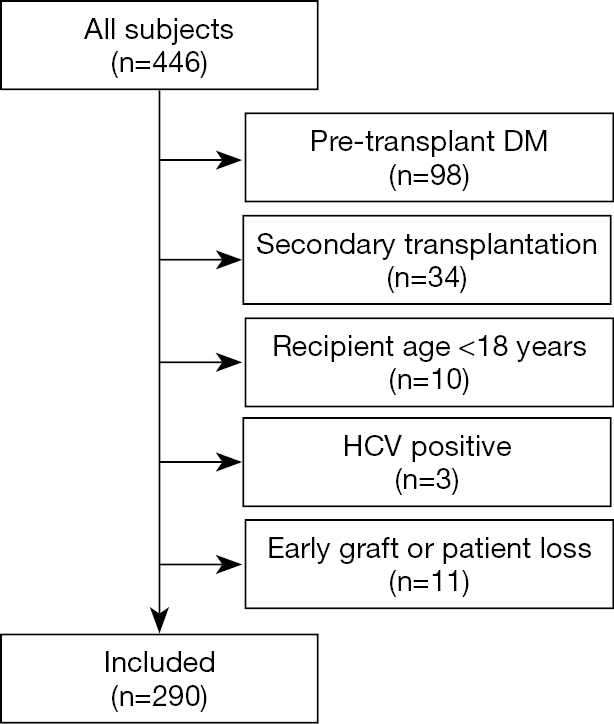 All patients were treated with corticosteroids, which began with intraoperative 500 mg intravenous (IV) methylprednisolone, followed by 500, 250, and 250 mg IV methylprednisolone on day 1, day 2 and day 3, respectively, relative to the day of operation. Oral prednisone started with a dose of 20 mg/day on day 4, with gradual tapering to 8 mg/day at month 6, and 4 mg/day thereafter. Corticosteroid reduction was more rapid in patients who developed PTDM.

As a screening test, a 75 g OGTT was performed after an overnight fast of at least 10 h several months prior to transplantation. Blood samples were obtained before and at 1 and 2 h after ingestion of a 75 g glucose solution. Biochemical data were retrieved from the laboratory data base, including glycemic profiles (fasting, 1 and 2 h glucose), C-peptide levels (fasting, 1 and 2 h), glycated hemoglobin (HbA1c), albumin, triglycerides, and total cholesterol. Clinical data were gathered from electronic medical records. CPI was calculated as follows: serum C-peptide level (ng/mL)/plasma glucose level (mmol/L).

In accordance with the American Diabetes Association (ADA) criteria (12), PTDM was diagnosed if one of the following was present during the first year post-transplantation: (I) a fasting plasma glucose (FPG) ≥7.0 mmol/L on two separate occasions, (II) a casual plasma glucose ≥11.1 mmol/L with symptoms of DM, (III) a 2-hour glucose level of OGTT ≥11.1 mmol/L, (IV) the need for insulin or oral antidiabetic medication.

Data were analyzed using the SPSS 19.0 software. Descriptive statistics are expressed as mean ± SD or median (interquartile range). Distribution of normality was assessed by the Kolmogorov-Smirnov test. Differences between groups were tested by the Student’s t-test or the non-parametric Mann-Whitney U test as appropriate. Categorical variables were analyzed by the chi-square test.

A logistic regression model was established to assess the independent risk factors associated with PTDM. Covariates of the final model were defined using a backward methodology. A P value <0.05 was considered statistically significant.

A survival analysis was carried out to calculate the cumulative probability of PTDM over time. A Kaplan-Meier analysis was performed to compare survival time (time period without PTDM) according to 2 h-CPI level (1 if 2 h-CPI ≤2.60 and 0 otherwise). A log-rank test was used to compare the obtained survival curves.

No differences were found between PTDM and non-PTDM patients regarding sex, dialysis mode, type of primary disease, or type of CNI. Patients with PTDM had higher pre-transplant age (P<0.001) and BMI (P=0.004) than the non-PTDM patients. A greater proportion of PTDM patients received kidney transplantation from deceased donors compared to non-PTDM patients (97.2% vs. 85% respectively, P=0.045). The patient characteristics of the study are shown in Table 1. 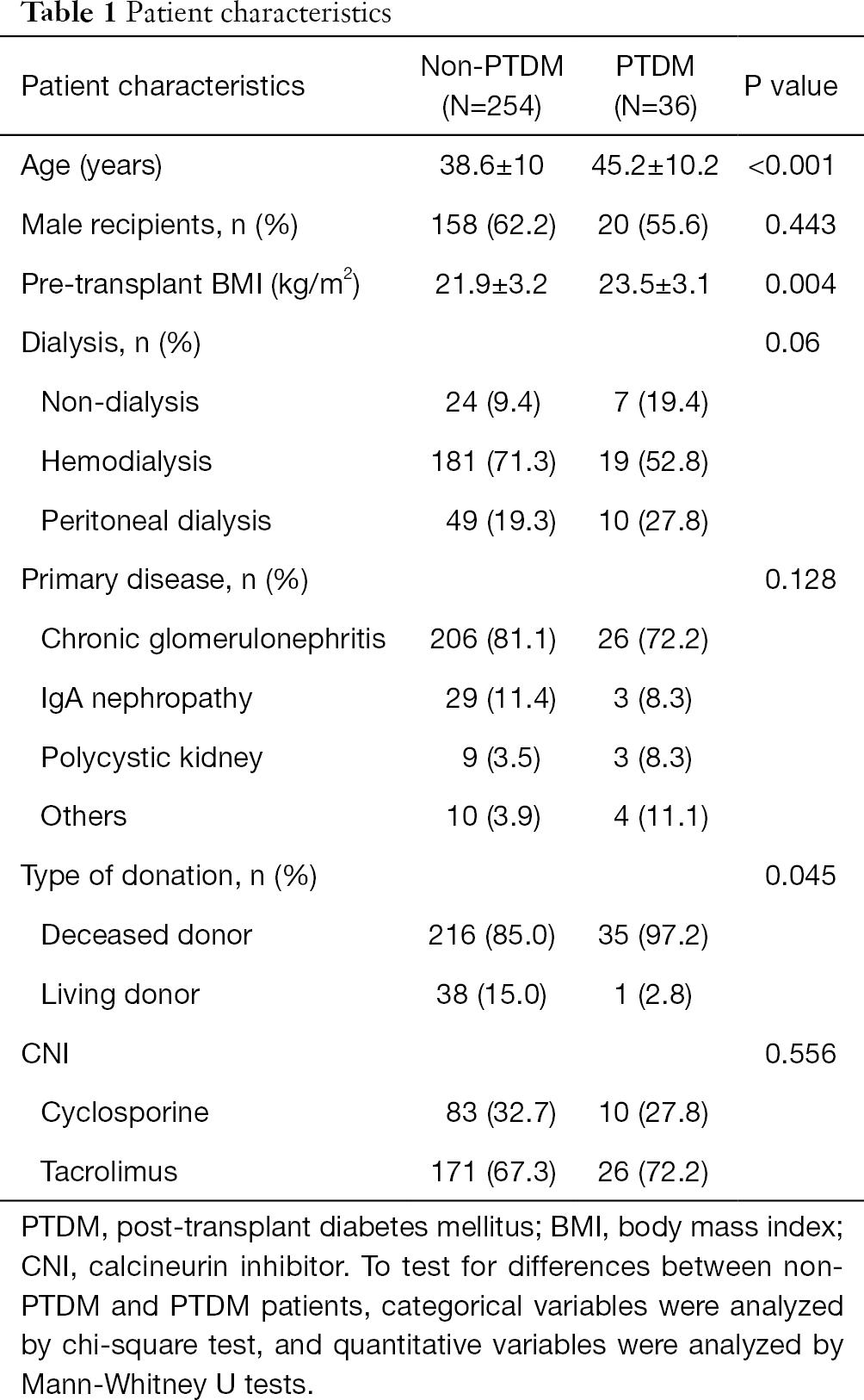 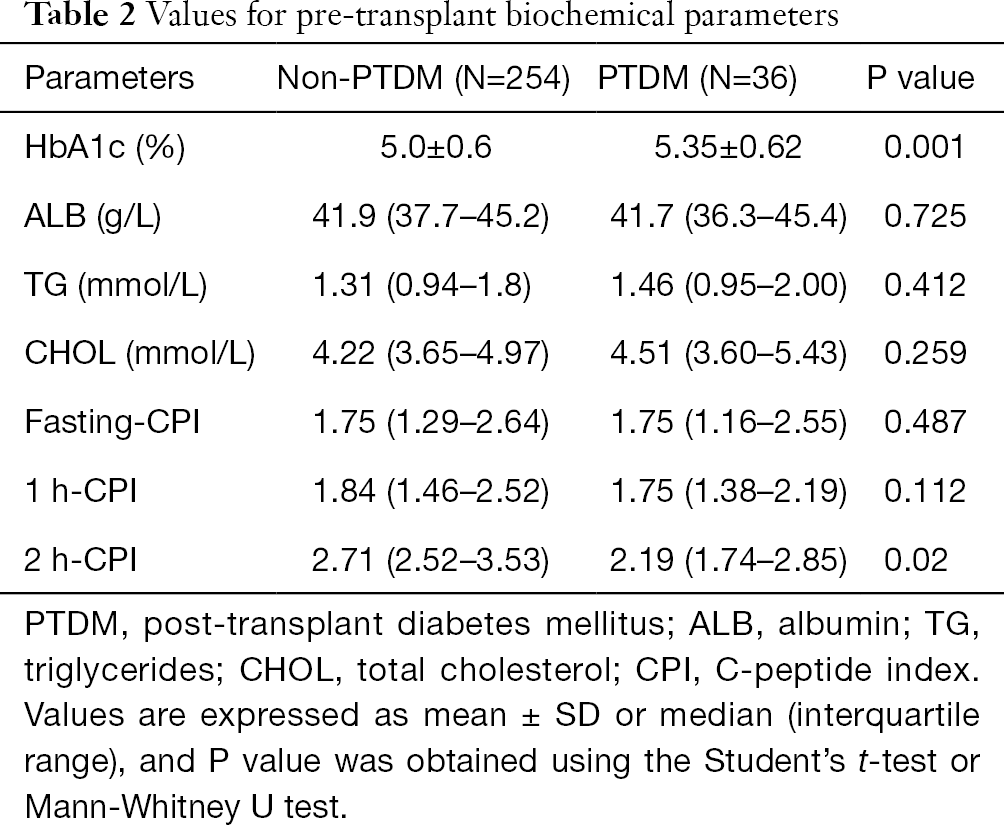 Univariate logistic regression analysis showed that age, pretransplant BMI, primary disease, HbA1c, and 2 h-CPI were significant predictors of PTDM (Table 3). In the multiple logistic regression model, variables with a P<0.1 in the univariate analysis were included in analysis (including age, pretransplant BMI, primary disease, type of donation, HbA1c, total cholesterol, and 2 h-CPI). This model showed that age, BMI, HbA1c, and 2 h-CPI were significant pretransplant predictors for PTDM. 2 h-CPI was the only protective factor for PTDM. For every 1-unit increase in 2 h-CPI level, there was a 43.2% decrease in the risk of developing PTDM (Table 4). 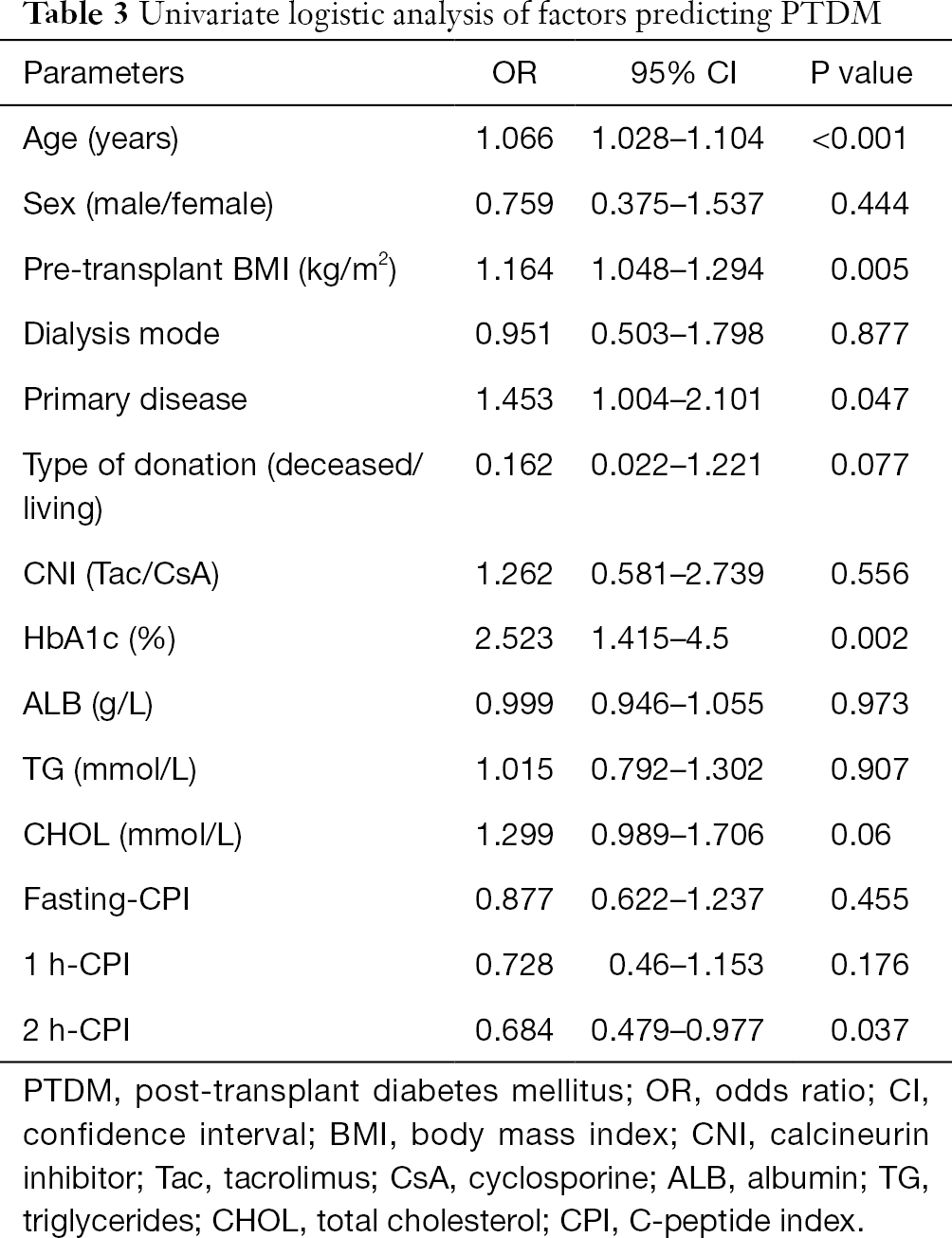 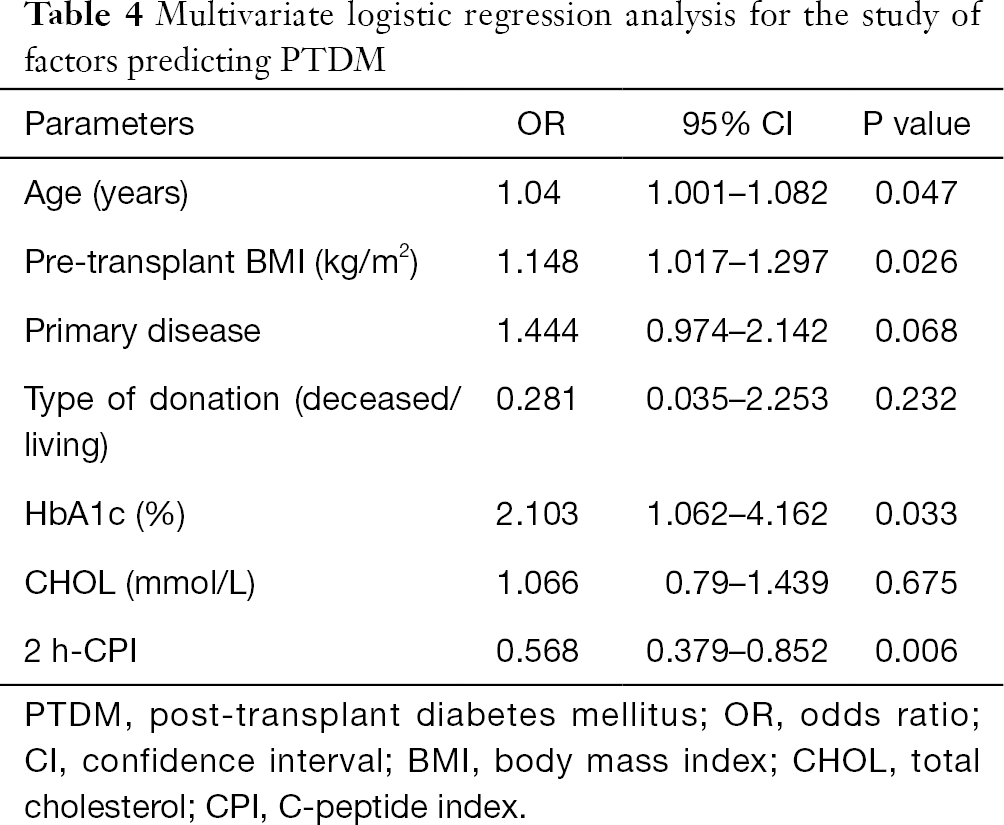 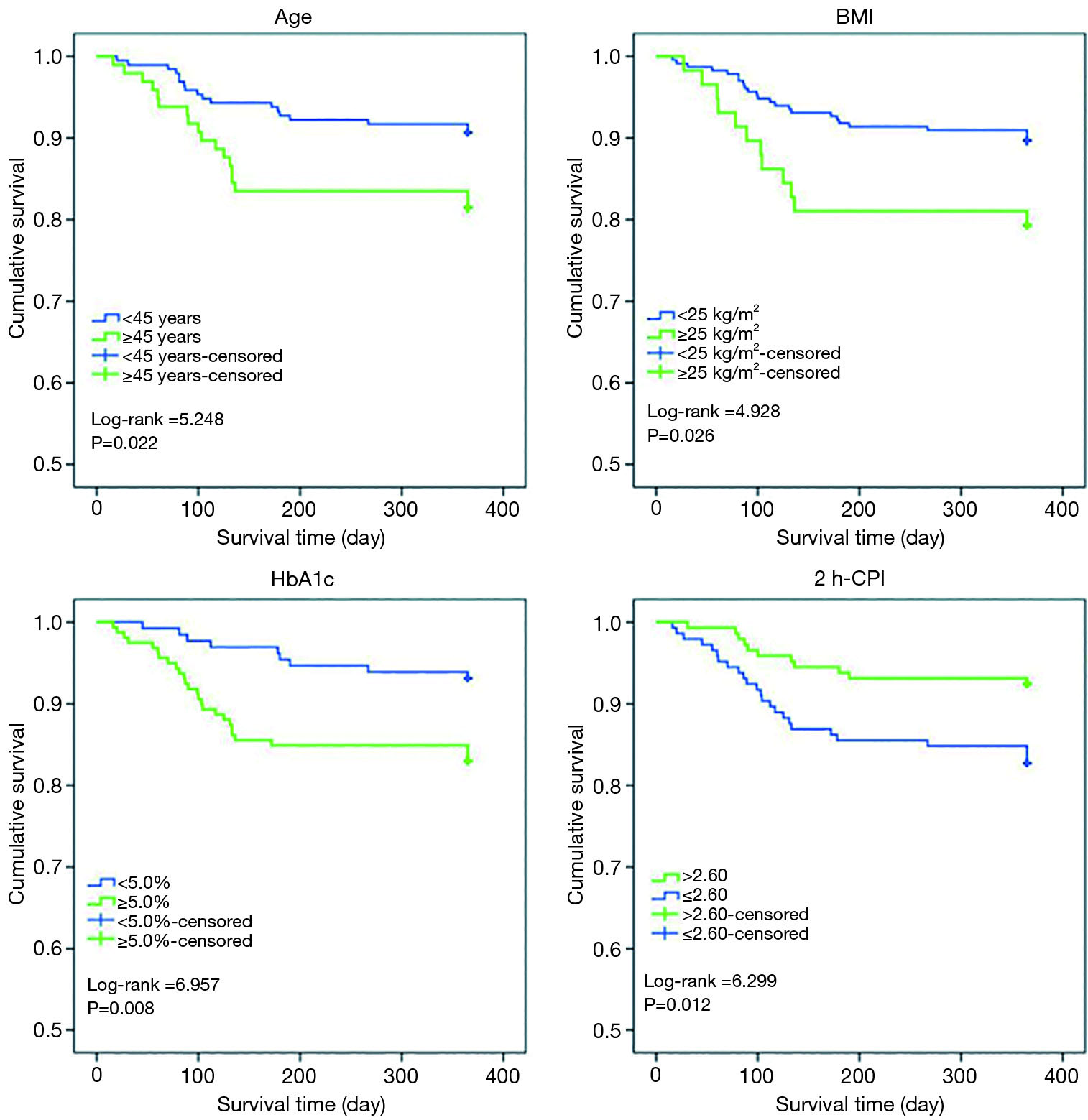 Obesity is a well-known risk factor that contributes to the development of PTDM (18). In a meta-analysis including 55 eligible studies, BMI was found to be an independent risk factor for PTDM (15). In this study, pre-transplant BMI was an independent predictor for the development of PTDM in kidney transplant recipients. Patients who have developed PTDM present a higher pre-transplant BMI, which is in line with previous results. In fact, obesity is associated with hypertriglyceridaemia, low-grade inflammation, and decreased adiponectin release, all of which induce insulin resistance (19). Furthermore, our results also show that patients who are overweight (BMI ≥25 kg/m2) show a greater cumulative probability of PTDM than those of normal weight. Our findings also indicate that for each 1-unit increase in pre-transplant BMI, the risk of developing PTDM increases by more than 10%.

HbA1c is a validated and reliable marker for glycemic control (20). According to the ADA, an HbA1c level ≥6.5% has been included as a criterion for the diagnosis of diabetes mellitus (21). In diabetic patients, HbA1c is an important predictor of morbidity and mortality (22). In the general population, even having HbA1c levels <6.5% may indicate a risk of developing diabetes mellitus (23). Erhan’s study shows that pre-transplant HbA1c is a predictive risk marker for early diagnosis of PTDM in kidney transplant patients (24). In this study, our results suggest that HbA1c is a predictor of PTDM, and the risk of PTDM increases as HbA1c levels increase.

The CPI has recently been devised as an index of β-cell function (8,25), which is often measured as fasting CPI or postprandial CPI. Previous studies have shown the clinical usefulness of the CPI, as CPI is strongly correlated with β-cell area as assessed by histological analysis of surgical specimens of the pancreas (7,9), and decreases progressively with the duration of type 2 diabetes (26). Moreover, postprandial CPI is more strongly correlated with the insulin requirement for the treatment of type 2 DM compared with fasting CPI (8). Based on OGTT, Yoko and colleagues found that 2 h-CPI was significantly correlated with both the oral disposition and clamp disposition index, which are two other indices used for evaluating insulin secretion, suggesting that OGTT 2 h-CPI is related to both insulin secretion and insulin sensitivity (27). Another recent study demonstrated that postprandial CPI is more related to diabetes than fasting CPI, and OGTT 1h-CPI is most related to diabetes in patients without diabetes (28). However, in this study, we did not find any relationship between OGTT 1h-CPI and PTDM; instead, OGTT 2 h-CPI was an independent predictor of PTDM. For every unit decrease in 2 h-CPI, there was a 43.2% increase in the risk of developing PTDM. In the survival analysis, patients with low pre-transplant 2 h-CPI levels had a higher probability of developing PTDM.