Urological cancers, mainly including bladder cancer (BC), prostate cancer (PC) and renal cell carcinoma (RCC), are common malignancies which bring heavy burden to human health. In 2018, the globally estimated new cases for BC, PC and RCC were 549,393, 1,276,106, and 403,262, respectively (1). Although improved survival outcomes have been made due to the development of surgical-centered comprehensive treatment, the prognosis of advanced patients is still unsatisfactory because of recurrence and metastasis. Additionally, only 25% patients could benefit from immunotherapy (2). In terms of BC, the 5-year survival was only 5.4% for distant metastasis (3). As for RCC, recurrence occurred in one-third surgery patients (4). Hence, it may be of great importance to investigate prognostic factors for survival and recurrence in urological cancers, which could play a critical role in clinical decision.

Recently, accumulating evidence emerged on the prediction of tumor recurrence and survival using clinical parameters. In various solid tumors, prognostic value of systemic inflammatory response (SIR) had already been proved, and many studies supposed that SIR might promote tumor growth based on previous extracellular matrix enzymes, growth factors or proangiogenic factors in tumor microenvironment. Also, inflammatory cytokines could activate cancer stem cell pathway, which was proved to promote tumor invasion and development. Furthermore, the nutritional status was also verified to be closely associated with survival outcomes. Previous studies (5,6) found that a low pre-treatment prognostic nutritional index (PNI) was related to a worse prognosis in many types of cancer. In 2009, Karl et al. (7) evaluated the nutritional status of 897 urologic patients by using the Nutritional Risk Screening (NRS) 2002, and they found malnutrition could increase the risk of malignant disease.

Glasgow prognostic score (GPS)/modified GPS (mGPS), combination of pre-treatment albumin and C-reaction protein (CRP) levels, are two different concepts that have minor discrepancy in the definition of Score 1. Recently, both GPS and mGPS showed great value in predicting survival outcomes of various cancer types (8-10). Certainly, a lot of articles has explored the specific role of GPS or mGPS in urological cancers. As for BC, Miyake (11) and Wuethrich (12) demonstrated that higher pre-treatment mGPS/GPS was strongly associated with poorer overall survival (OS), and similar conclusions were drawn in RCC (13,14) and PC (15). However, Ferro (16) reported that pre-treatment mGPS could not be a predictive tool for OS and cancer specific survival (CSS). Another study (17) conducted by Cho supported this result. Additionally, debates still existed on the specific role of GPS/mGPS in urological cancers because of the differences in sample size, study design and the intermixed use of terms (GPS and mGPS). Hence, we performed this study to clarify the relationship between GPS/mGPS and prognosis of patients with urological cancers. To our best knowledge, this is the first meta-analysis to estimate the prognostic role of pre-treatment GPS/mGPS in urological cancers, which could provide clinical guidance in the future due to the lack of strong evidence guiding the clinical application of GPS/mGPS in urological cancers.

In order to investigate the relationship between mGPS/GPS, we searched relevant articles from public online databases including PubMed, Web of Science and Embase comprehensively, up to May 30th 2019. Text words and Medical Subject Headings (MeSH) terms were combined: (“modified Glasgow prognostic score” or “Glasgow prognostic score” or “GPS” OR “mGPS”) and (“urological/ urothelial tumor/cancer” or “prostate cancer” or “bladder cancer” or “renal cell cancer” or “upper tract urothelial carcinoma” or “penile cancer”) and (“progress” or “survival” or “outcome” or “prognosis” or “recurrence”). This study was conducted following the preferred reporting items for systematic reviews and meta-analyses (PRISMA) statement (18) and only English references were included in the selection process.

Relevant studies were finally included should meet the following criteria: (I) case control or cohort studies, (II) patients were diagnosed with urothelial carcinomas with histopathological results, (III) related endpoints were explored (such as: OS, progress-free survival (PFS), recurrence-free survival (RFS), CSS, disease-free survival (DFS), disease-specific survival (DSS) and corresponding data were present in the form of hazard ratios (HRs) with 95% confidence interval (CIs) in the articles. Meanwhile, articles should be excluded when meet any of the following criteria: (I) case report, letter or review, (II) accurate data were lacked, (III) simple description with no further analysis or key information.

The GPS score was defined as described before (19): patients with both elevated CRP (>1.0 mg/dL) and hypoalbuminemia (<3.5 g/dL) assigned a score of 2, while those with none or one abnormality were assigned scores of 0 and 1, respectively. The only difference between mGPS and GPS was that hypoalbuminemic patients without elevated CRP were assigned a score of 0 in mGPS score system.

Two independent researchers (F Qi and Y Xu) were assigned for the whole selection process and discussion with a third investigator (Y Zheng) if disagreements exist. We extracted the following data according to prepared standard form: first author, publication year, cancer type, area, treatment, study design, sample size (total patients), endpoints (corresponding HRs with 95% CIs), follow-up and definition of GPS/mGPS. Kaplan-Meier curves were used to extract HR with 95% CI (20,21) if it could not be obtained directly from the article. Quality of each enrolled study was evaluated by the Newcastle-Ottawa Scale (NOS) (http://www.ohri.ca/programs/clinical_epidemiology/oxford.htm), which was a useful tool for the quality assessment of non-randomized studies (22).

The whole analysis process was performed by Stata software (version 12.0; StataCorp LP, College Station, TX, USA). Pooled HRs were calculated by HRs with 95% CIs from each study. Moreover, heterogeneity was evaluated according to Higgins I2 and Cochran’s Q test. The random effect model (DerSimonian-Laird method) (23) was applied if significant heterogeneity existed (P<0.10 or I2>50%). Otherwise, the fixed effect model (Mantel-Haenszel method) (24) would be utilized. Publication bias was assessed using Egger’s linear regression test and Begg’s funnel plot, and P<0.05 was thought to have statistical significance. Additionally, sensitivity analyses were conducted to check the reliability and stability of the pooled results by excluding each study once a time consecutively.

After careful selection, a total of 20 studies (11-17,25-37) were eventually enrolled in this meta-analysis, and detailed information of selection process was shown in Figure 1. Baseline characteristics of eligible researches were present in Table 1 and the NOS scores of included studies were all above 6 (detailed rankings were in Table 2). Generally, different studies focused on different urological cancers [1 study on PC, 5 studies on BC, 11 studies on RCC, 1 study on upper tract urothelial carcinoma (UTUC) and 2 studies on mixed cancer types]. In terms of treatment methods, immunotherapy was studied in 3 articles, surgery was studied in 13 articles, chemotherapy was in studied 2 articles and treatment method was not available in 2 articles. Overall, 11 articles explored the role of GPS/mGPS for OS, 10 for CSS, 1 for DFS, 1 for PFS, 5 for RFS and 1 for DSS. 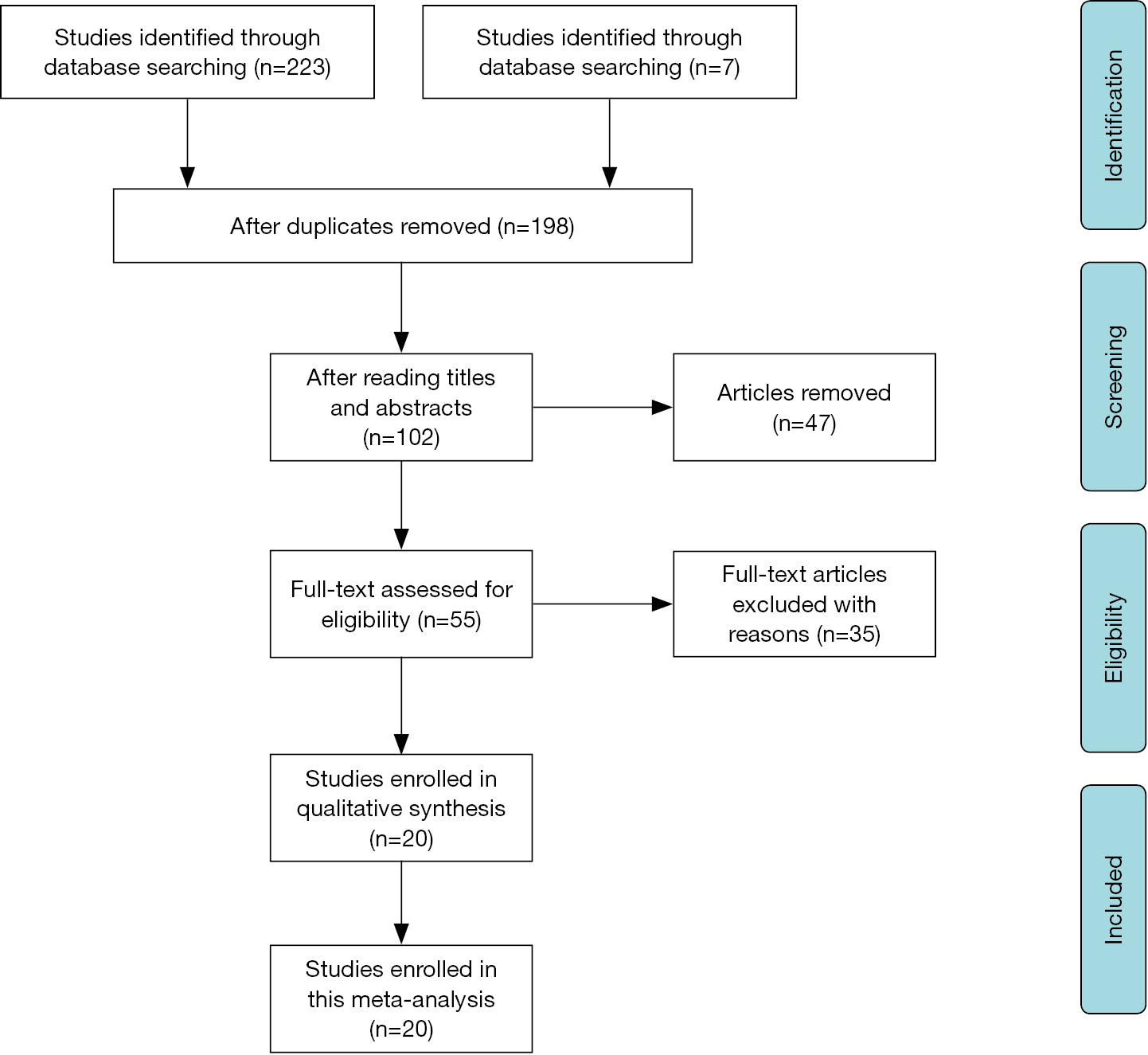 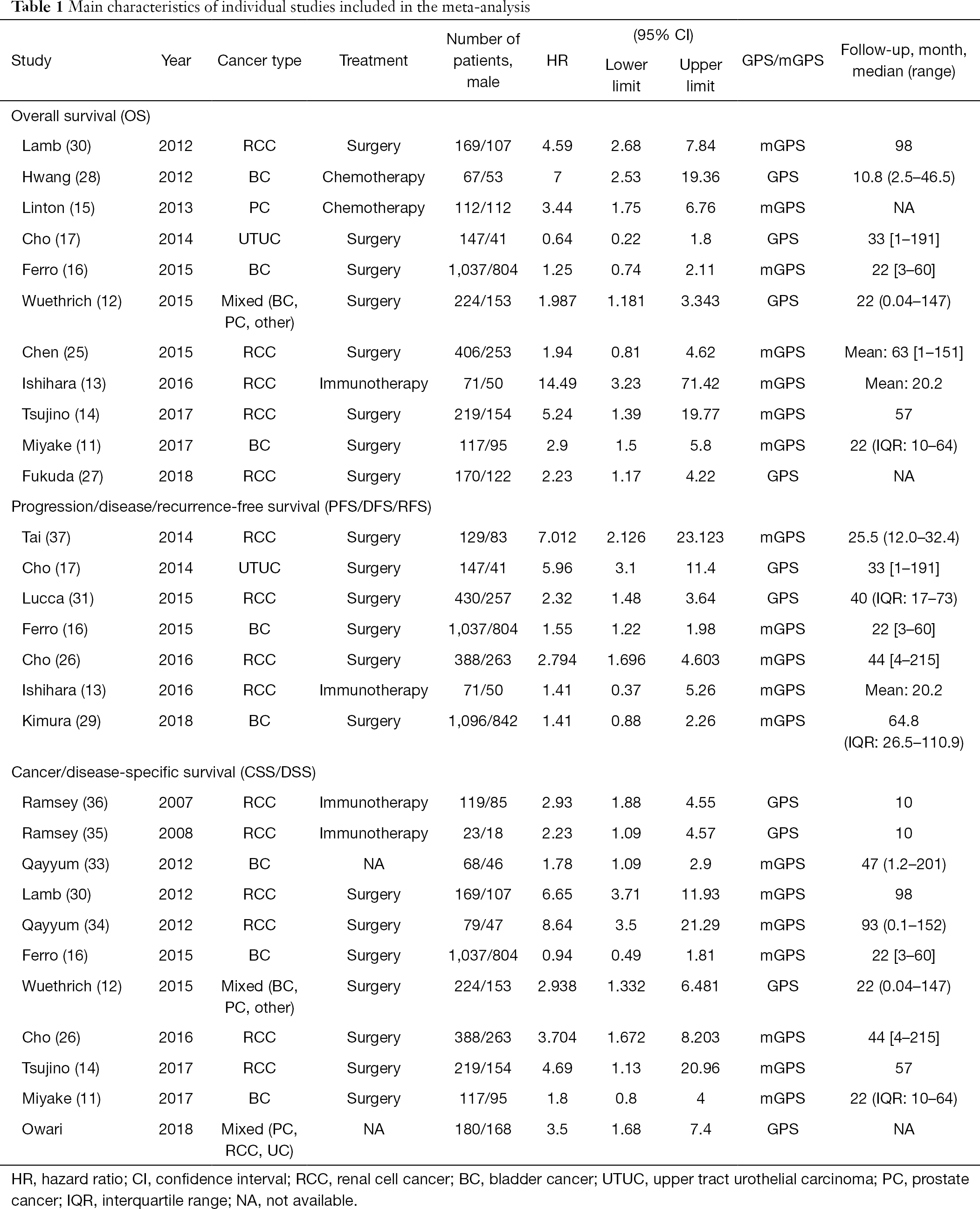 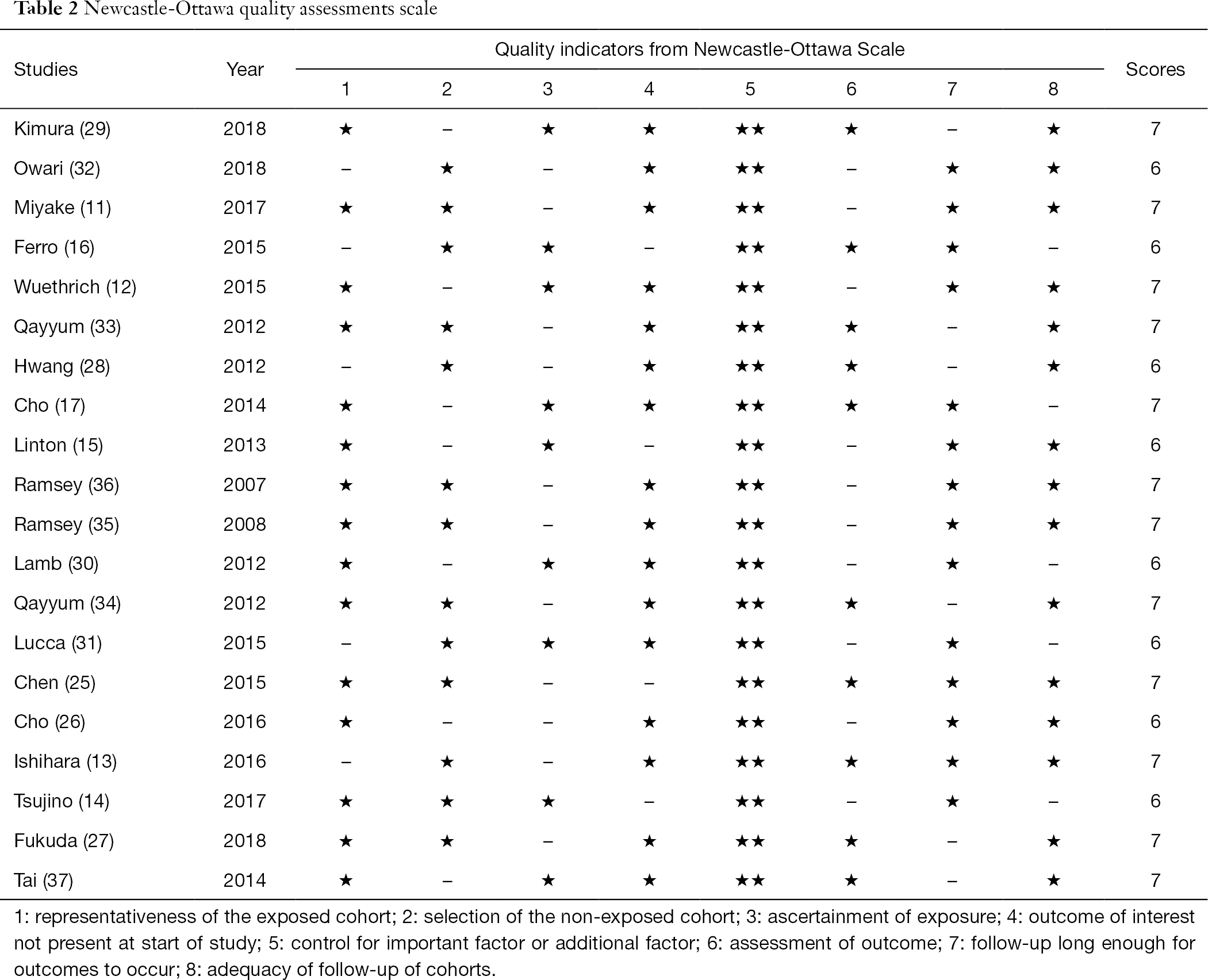 GPS/mGPS and OS in urological cancers 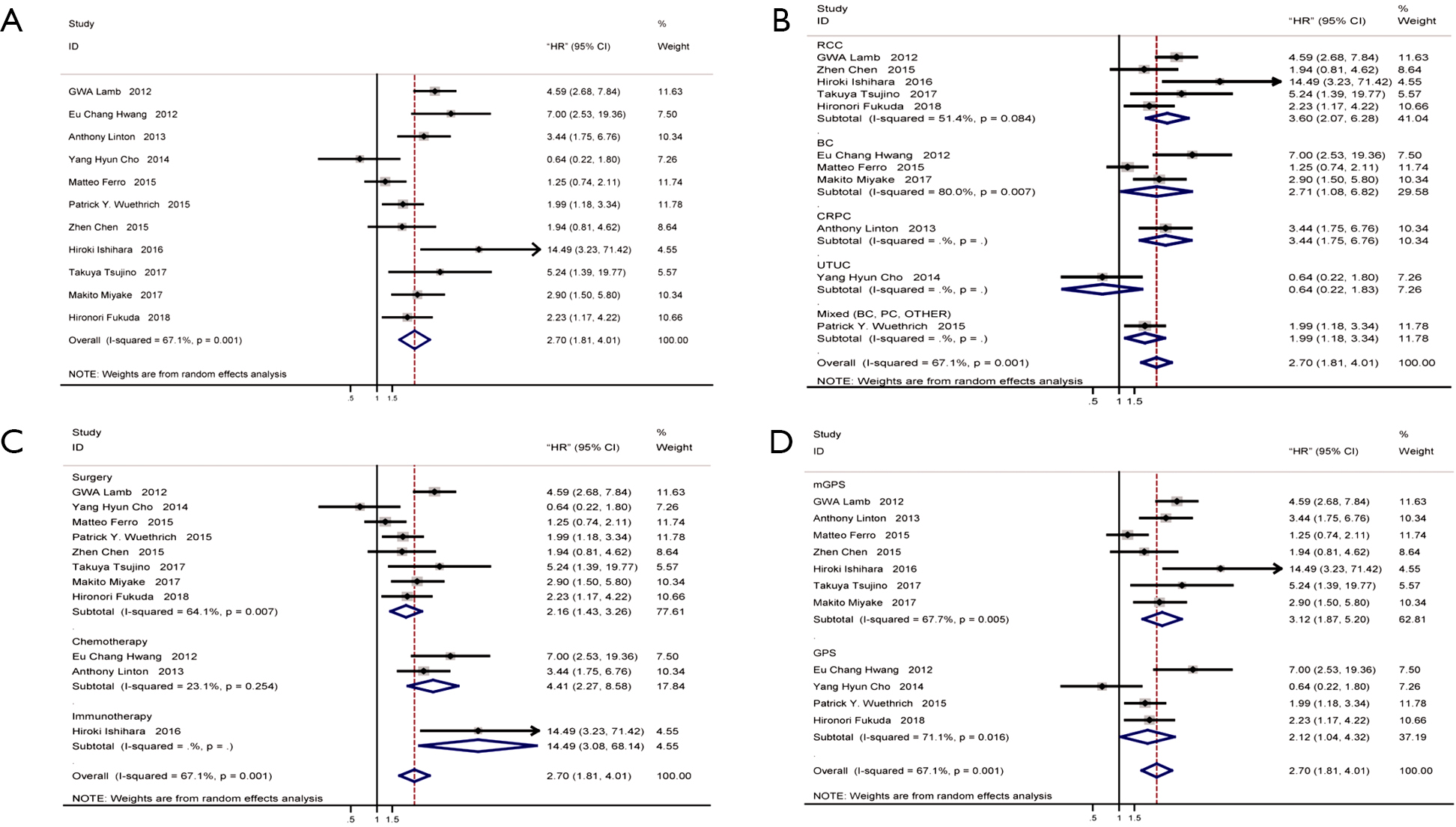 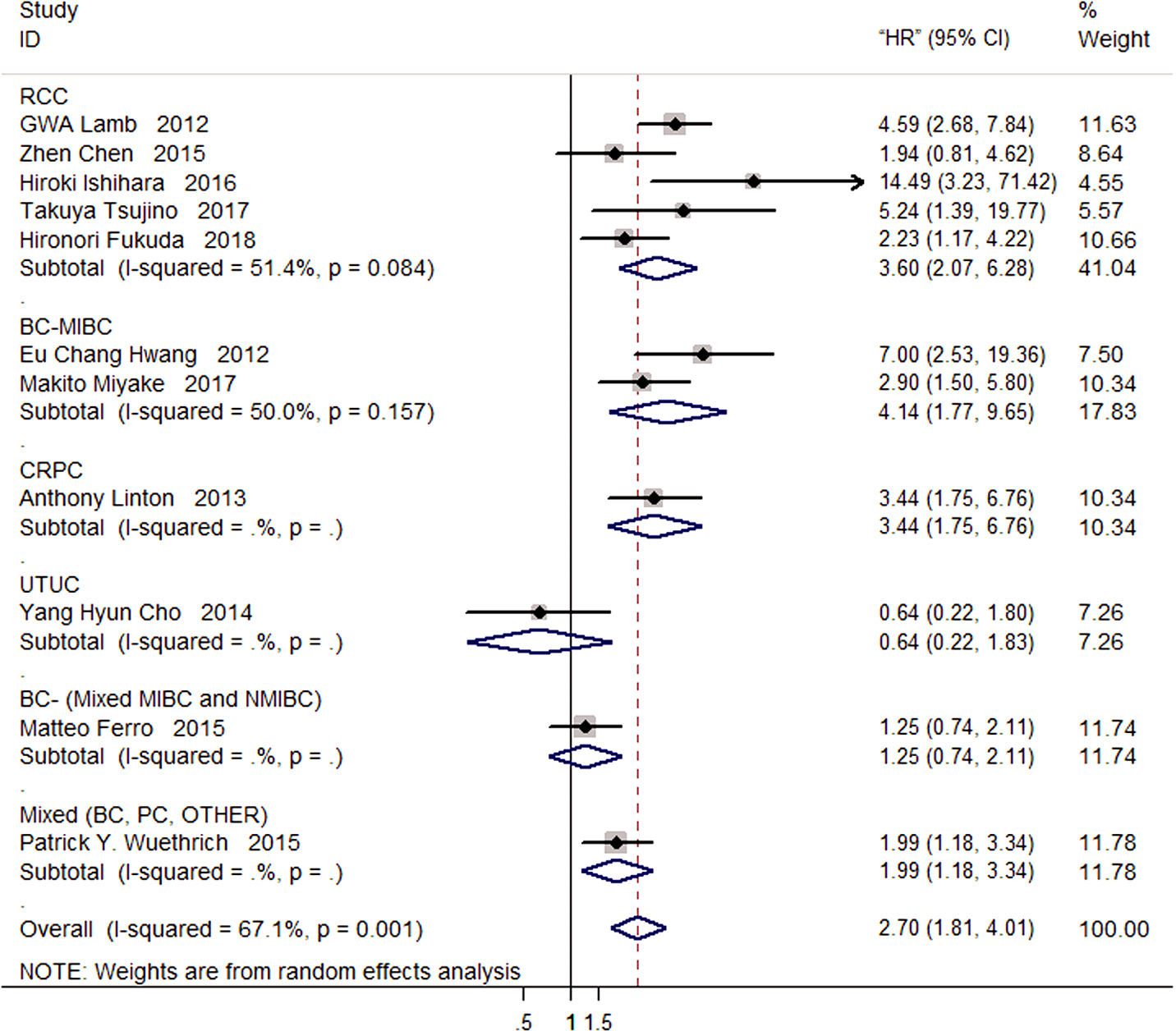 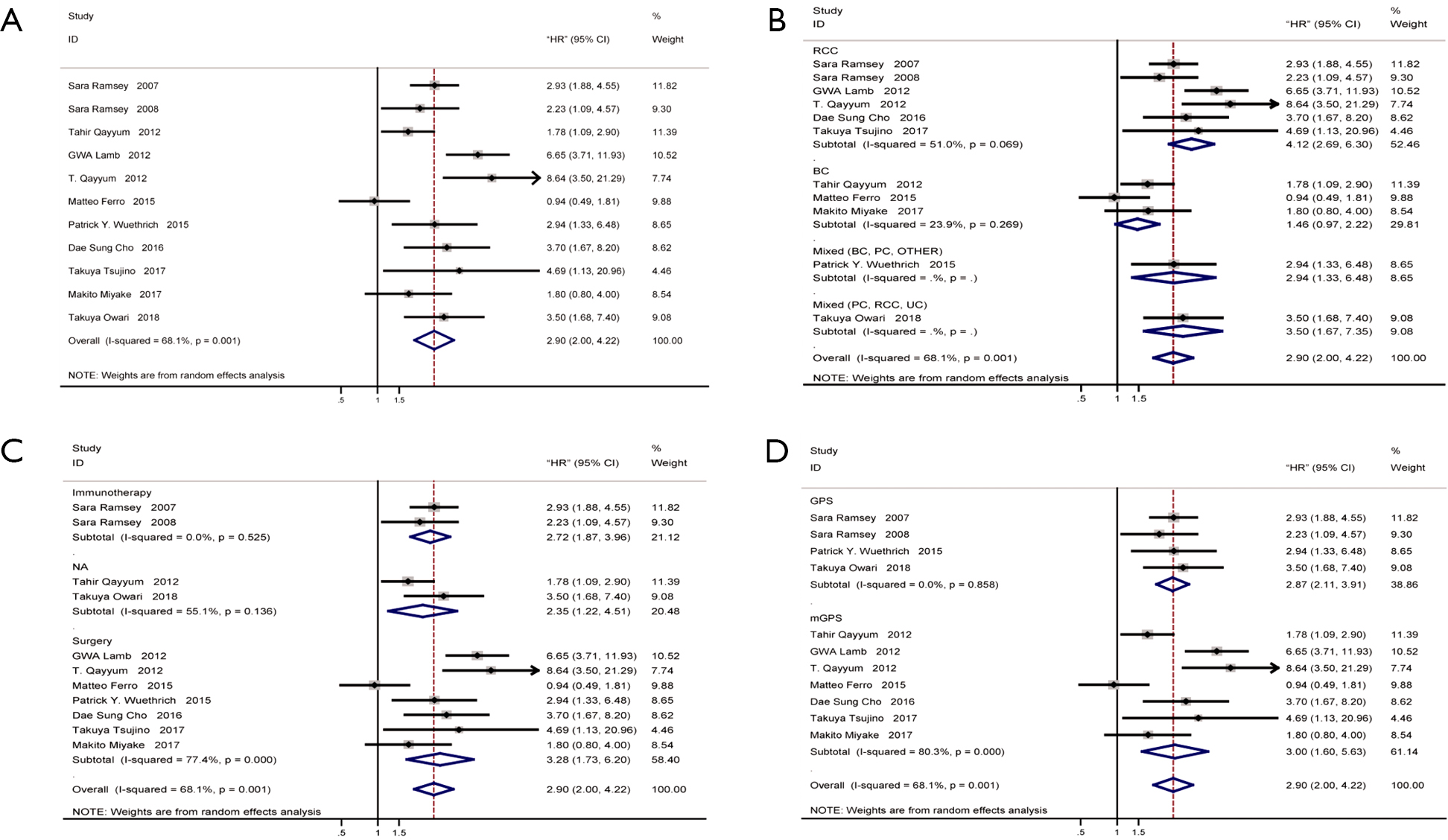 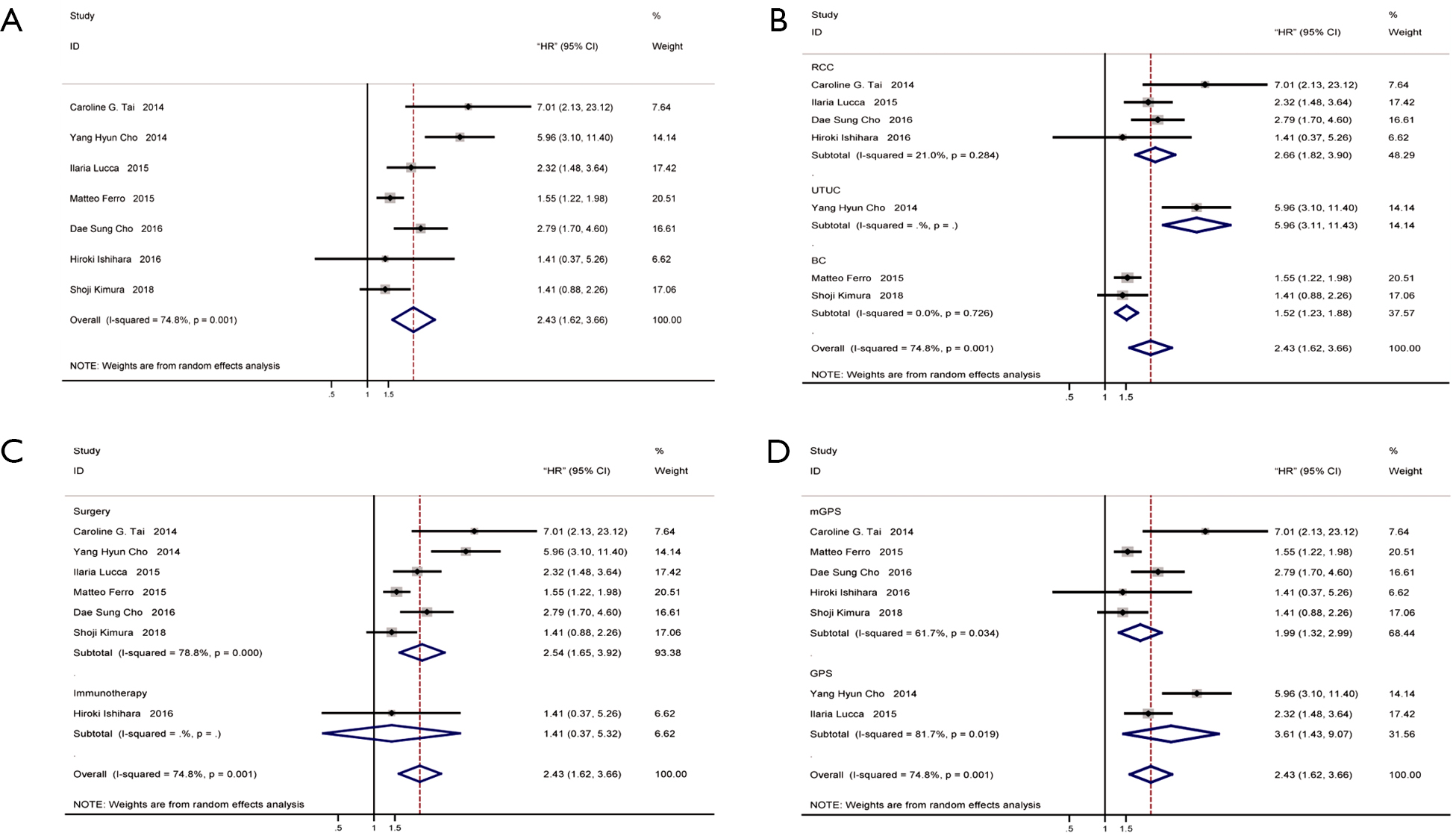 In order to discover the individual influence on the whole, we performed the sensitivity analysis by calculating the remained part by omitting one single study each time. Obviously, our results indicated that no single study could influenced the pooled HRs with 95% CIs significantly, indicating that our results were reliable (Figure 5). 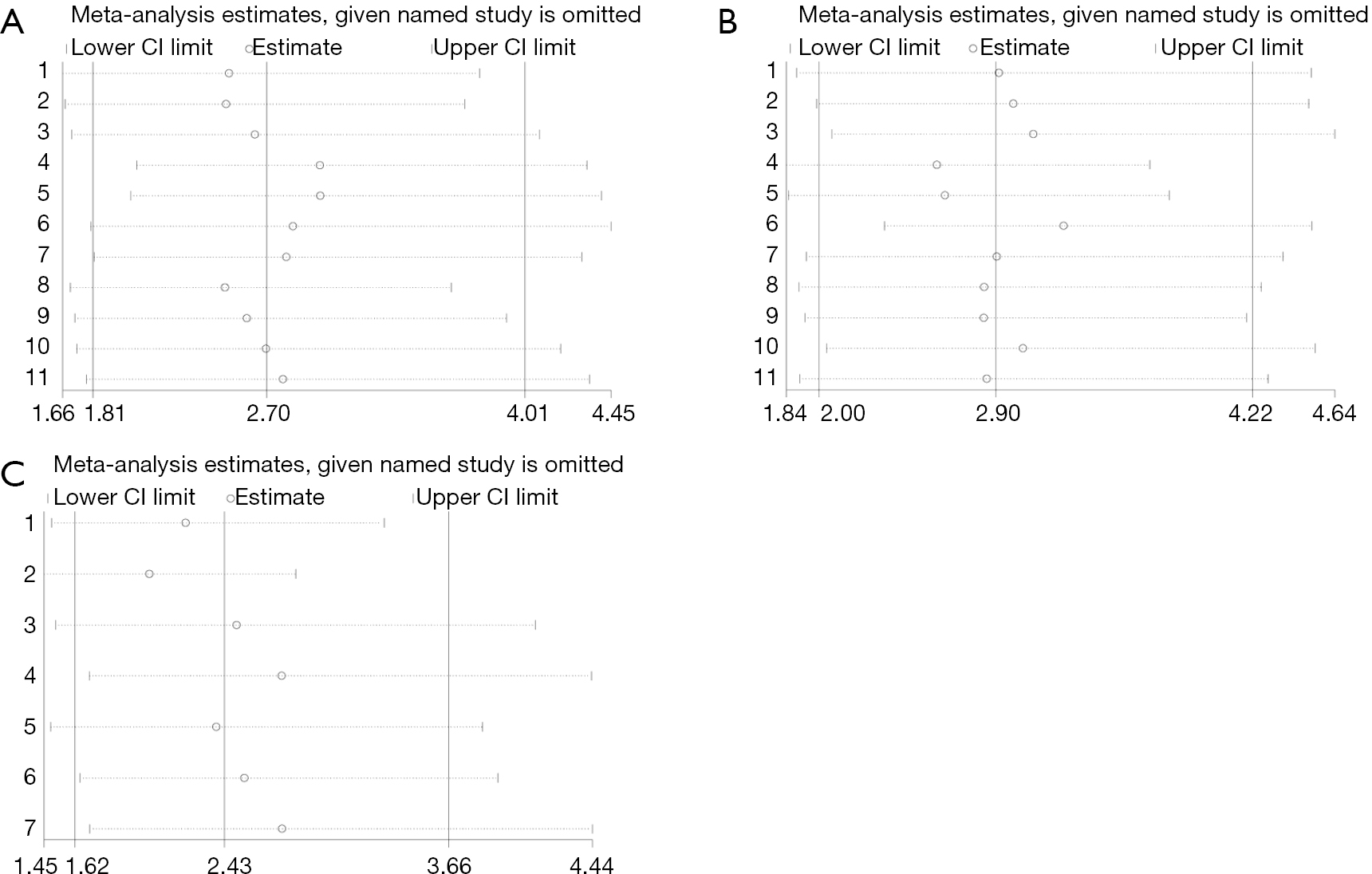 As shown in Figure 6, publication bias was evaluated based on the Egger’s linear regression test Begg’s funnel plot. All P values for OS or CSS/DSS or DFS/RFS/PFS were more than 0.05 (PEgger: OS: 0.329; CDD/DSS: 0.501; DFS/RFS/PFS:0.147), which meant that no significant bias existed. 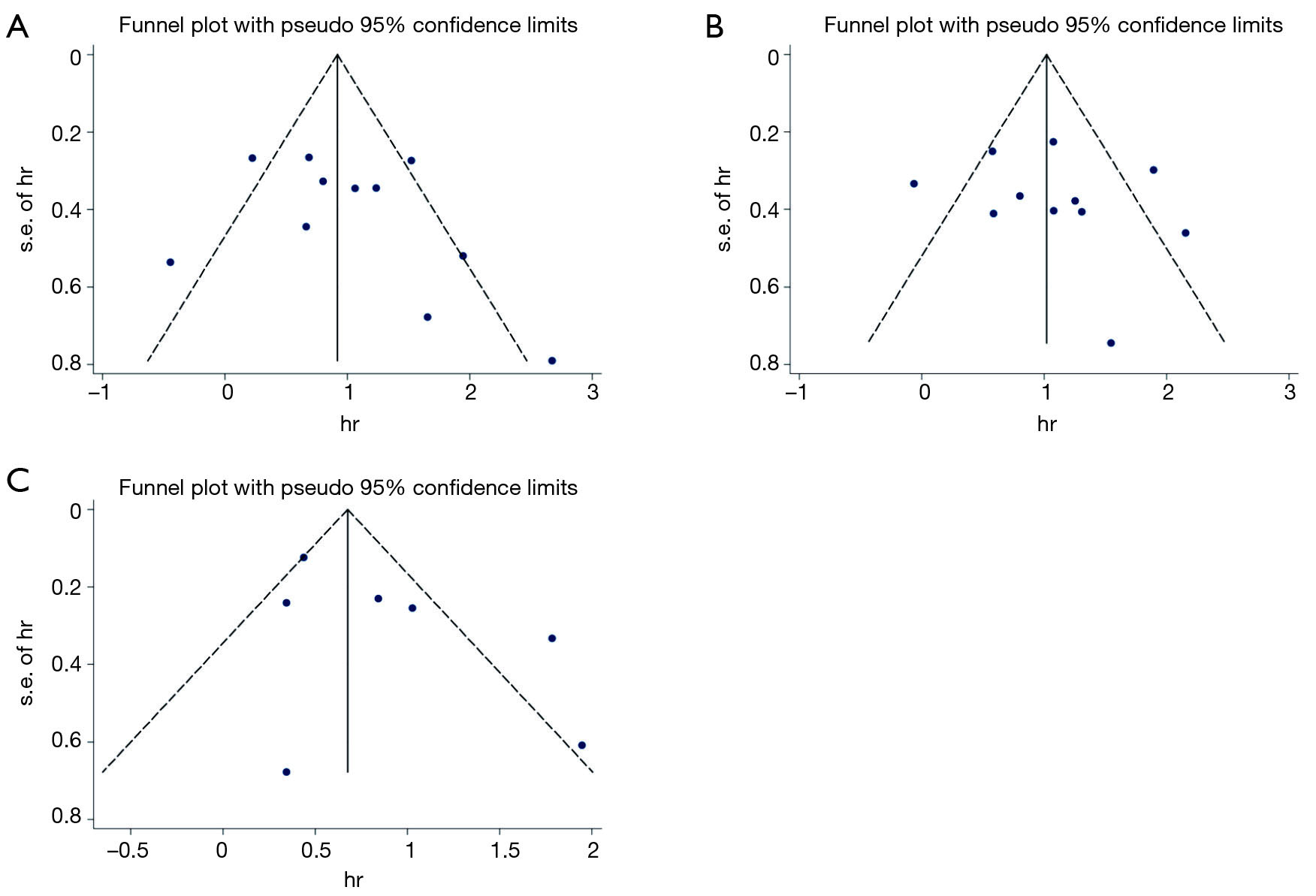 Previous studies (38-40) has already recognized that host inflammatory response was a vital determinant of disease progression. Elevated CRP, an evidence of SIR, had been identified as a negative prognostic factor in many cancers, such as thymic epithelial tumors (41), lung cancer (42), gastric cancer (43), PC and so on. Thurner et al. (44) identified that elevated plasma CRP (≥8.6 mg/L) was a strong prognostic predictor for poor survival in patients with PC, which was independent of other factors such as Gleason score, tumor stage and prostate specific antigen when diagnosed. Also, preoperative serum albumin level has already been recognized as a valuable factor on prognosis prediction in patients with various cancer types. Ayhan et al. (45) reported that preoperative albumin level was an independent predictive factor for OS in debulked epithelial ovarian cancer patients. Lambert et al. (46) found that pre-treatment albumin levels had a bearing on higher mortality in BC. A research conducted by Heys et al. (47) demonstrated that the presence of lower pre-treatment albumin level was tightly related to poorer survival in patients with colorectal cancer.

GPS, a combination of serum and CRP, was first introduced by Forrest (48,49) to establish a new predictive system for inoperable non-small cell lung cancer patients. Forrest discovered that GPS was an independent predictor of OS (HR 1.88; 95% CI, 1.25–2.84, P=0.002), which could provide additional prognostic information for clinical practice. Ramsey et al. (36) reported that in metastatic RCC patients, GPS could predict survival outcomes independent of former scoring systems. In 2007, McMillan et al. (50) first suggested to modify GPS into mGPS evaluating the prognostic effect of SIR on patients who underwent resection for rectal and colon cancers, and he believed that hypoalbuminemia was dependent on the presence of SIR in colorectal patients. Additionally, the prognostic role of mGPS had been proved in various cancer types, such as colorectal cancer (51), esophageal cancer (52), lung cancer (53) and so on. Fan et al. (54) compared GPS and mGPS in prognosis evaluation, and he put forward that GPS was superior to mGPS in non-small cell lung cancer patients. However, further studies are needed to discuss the comparison between GPS and mGPS. Furthermore, the concepts of sensitive mGPS (55) (S-mGPS) and high-sensitivity modified Glasgow prognostic score (HS-mGPS) (56,57) were proposed, and their prognostic effect had been proved.

In our research, 20 studies were enrolled to explore the relationship between GPS/mGPS and survival outcomes. The pooled results showed that lower pre-treatment GPS/mGPS level was closely related to better survival outcomes including OS, CSS/DSS and DFS/PFS/RFS. Obviously, both GPS and mGPS played an important in prognosis prediction. Furthermore, subgroup analysis by treatment type, GPS/mGPS and cancer type acquired the same conclusions. In sum, a low level of pre-treatment GPS/mGPS may indicate better survival outcomes. Only one article (17) was on the relationship between OS and GPS/mGPS in UTUC, and in that research Cho et al. suggested that GPS had no OS prediction significance (HR =0.64; 95% CI, 0.22–1.80) which was not consistent with the pooled result. We thought it was because of the relatively fewer articles in the group and uncontrollable bias. Study (not included in this meta-analysis because of the exclusion criteria and low evidence level) conducted by Suyama (58) investigated the prognostic significance of GPS in upper urinary urothelial carcinoma provided useful information, he claimed that GPS was an independent factor which could predict overall death in patients with urothelial carcinoma significantly (HR =6.18; 95% CI, 1.85–20.60).

This study was the first attempt for us to investigate the prognostic value of pre-treatment GPS/mGPS in urological cancers. Additionally, the strict inclusion criteria for enrolled articles made it more convincing and robust. Nevertheless, some potential limitations should not be ignored. Firstly, unavoidable bias may exist because most of the included studies were retrospective researches rather than prospective articles. Secondly, the entire heterogeneity was huge in some analysis processes, but the heterogeneity diminished when in subgroup analysis. Thirdly, relevant studies were too few in some subgroup analysis to obtain a convincing which made uncontrollable bias may exist (Cancer type: there was only one article on PC, and only one article on UTUC. Treatment type: only two articles on chemotherapy and only three articles on immunotherapy). Last but not least, further prospective randomized controlled trials were needed and upcoming studies should solve above difficulties before widely clinical application.

Our study shed light on that GPS/mGPS might be an independent prognostic factor in urological cancers, indicating that a lower level of pre-treatment GPS/mGPS was closely related to better survival outcomes (OS, DFS/RFS/PFS, CSS/DSS). However, deep exploration was restricted because of the limited researches. Therefore, higher quality randomized controlled trials and large sample size studies are still needed to further verify our results.