Hypertension is a pathological change in multiple organs, such as the heart, blood vessels, brain, and kidney, characterized by long-term, chronic, complex progress caused by genetics, the environment and neurohumoral/hormonal drive. Angiotensin II (Ang II) comes from the renin-angiotensin system existing in the systemic and local circulation, constricts blood vessels through its structural and functional effects, and plays a critical role in the regulation of blood pressure and the pathogenesis of hypertension. Acute stimulation of Ang II can modulate salt/water balance, vasomotor tone and blood pressure in the body, while chronic stimulation can accelerate the proliferation and hypertrophy of vascular smooth muscle cells (VSMCs), influence VSMC migration and extracellular matrix deposition and result in cardiac and vascular remodeling (1,2).

VSMCs are the predominant structure of the vascular system and play a pivotal role in maintaining blood pressure and angiostasis (3). Uncontrolled proliferation and migration of VSMCs is a key link in assorted cardiovascular diseases (hypertension, coronary heart disease, vascular restenosis and atherosclerosis) (1,4). Ang II plays countless roles in regulating cardiovascular physiology and pathology by modulating different signaling pathways of VSMCs and by influencing the interactions between VSMCs and extracellular matrix, further leading to proliferation, contraction, migration, hypertrophy, fibrosis, rearrangement and lipid oxidation of VSMCs, which ultimately result in hypertension, atherosclerosis, restenosis and so on (2).

Cortistatin (CST) is a recently detected biological peptide secreted from the cerebral cortex, whose biological function has been found not only in protecting the encephalon, immunologic system and endocranium but also in regulating cardiovascular diseases (15,16). In recent years, studies on the effects of CST on cardiovascular diseases have continued. In 2013, a study showed that CST restrains the proliferation and migration of human VSMCs in atherosclerosis and restenosis (17). It reported that CST inhibits the accumulation of extracellular matrix in abdominal aortic aneurysms (18). Moreover, our experimental team previously proved that CST plays a protective role in suppressing vascular calcification (16,19), myocardial infarction (20) and sepsis (21). We are inquisitive whether CST acts as a protector in hypertension and what cellular and molecular mechanisms may be involved. Accordingly, we hypothesized that CST may suppress Ang II-mediated proliferation and migration of VSMCs, and this effect might be associated with MAPK signaling pathways.

Healthy male Wistar rats weighing 100–120 g, whose isolated thoracic aorta tissue was used for VSMC culture, were obtained from the Animal Center laboratory, the Second Affiliated Hospital of Harbin Medical University. The animal care and experimental procedures were approved by the Animal Management Rule of the Ministry of Health, People’s Republic of China (document No. 55, 2001) and carried out in accordance with the Ethics Committee of the First Affiliated Hospital of Harbin Medical University, China. In short, after removing the intima and adventitia of an isolated thoracic aorta, the aorta was processed into thin slices with an area of approximately 1–2 mm3, which were first cultured in Dulbecco’s modified Eagle’s medium (DMEM) (Corning, New York, NY, United States) containing 4.5 g/L glucose, 20% fetal bovine serum (FBS) (Clark, Claymont, DE, United States) and 1% penicillin-streptomycin solution in an incubation environment of 5% CO2 at 37 a for approximately 3–7 days. After that, primary VSMCs grown from the periphery of tissue blocks were cultured in the medium (only the FBS concentration changed to 10%, while other components remained unchanged). VSMCs after 4–8 passages were selected for our experiments. For experimental administration, VSMCs were treated with Ang II (10−7 M) for 24 h after a 12 h stationary stage in pure DMEM or were pretreated for 30 min with CST (10−8 or 10−7 M) before Ang II administration. For inhibition assays, PD98059 (5×10−5 M), SB203580 (10−5 M), SP600125 (10−5 M) and XMD17-109 (10−6 M) pretreatments were added for 1 h before Ang II administration.

CCK8 was used to determine cell proliferation. VSMCs were seeded in a 96-well plate at a density of 2×103 cells/well in 100 µL of cell solution with 10 µL of CCK8 solution for 1.5 h at 37 °C. The optical density (OD) was examined at 450 nm with a LI-COR microplate reader (Lincoln, Nebraska, United States). Cell proliferation was calculated by the following formula: cell proliferation = OD values (treated groups)/OD values (control groups).

VSMCs in each group were collected and suspended in pure DMEM, and then the density was adjusted to 2×105 cells/ml. The cell suspensions with or without CST in each group were cultured in the upper chamber of a Transwell (8.0 µm, Corning, New York, NY, United States), and at the same time, the lower chamber was filled with DMEM (10% FBS) with or without Ang II for 24 h. The superior layer cells of the upper chamber were washed with phosphate-buffered saline (PBS) (3 times) and erased with cotton swabs, and then they were fixed in 4% paraformaldehyde and stained with 0.1% crystal violet. After rinsing with PBS, the cells were observed and photographed under an inverted microscope. The number of stained cells was counted (5 visual fields in each group), and the experiment was repeated at least three times.

Values are expressed as the mean ± SD, and all experiments were repeated at least 3 times, using GraphPad Prism 5.0 software for analysis. Differences among experimental groups were analyzed using one-way ANOVA followed by Tukey’s test. P<0.05 was regarded as significant.

Effects of Ang II on VSMC proliferation and migration

When VSMCs were treated with Ang II for 0, 12, 24 and 48 h, we observed an obvious increase in the expression levels of p-ERK1/2, p-p38 MAPK, p-JNK and p-ERK5 and an time-dependent increase in the expression level of p-ERK1/2 under Ang II stimulation (Figure 2A,B,C,D,E). For the phosphorylated protein expression levels of the other MAPK signaling pathways, there were no large differences between 24 and 48 h of Ang II treatment in VSMCs. Therefore, in our study, we chose 24 h as the suitable administration time of Ang II to VSMCs.

To delve deeply into the role of the MAPK signaling pathways in VSMC proliferation and migration promoted by Ang II, we attempted to use inhibitors of the ERK1/2, p38 MAPK, JNK and ERK5 signaling pathways. For pharmacologic inhibition assays, PD98059, SB203580, SP600125 and XMD17-109 pretreatments were independently added 1 h before Ang II treatment of VSMCs. In Figure 3A,B,C,D, we observed that PD98059, SB203580, SP600125, and XMD17-109 clearly blocked the Ang II-mediated increases in protein expression levels of p-ERK1/2, p-p38 MAPK, p-JNK and p-ERK5, respectively. As shown in Figure 3A,B,C,D, in VSMCs, PD98059, SB203580, SP600125 and XMD17-109 individually downregulated the expression levels of PCNA and OPN that were increased by Ang II and upregulated the expression level of α-SMA that was decreased by Ang II. Moreover, in agreement with the western blot results, CCK8 analysis showed that administration of the inhibitors attenuated Ang II-induced cell proliferation (Figure 3E). Transwell observation further corroborated that PD98059, SB203580, SP600125, and XMD17-109 mitigated the migration of VSMCs stimulated by Ang II (Figure 3F). These results indicated that the four main MAPK signaling pathways (ERK1/2, p38 MAPK, JNK and ERK5) may all be involved in Ang II-promoted proliferation and migration. 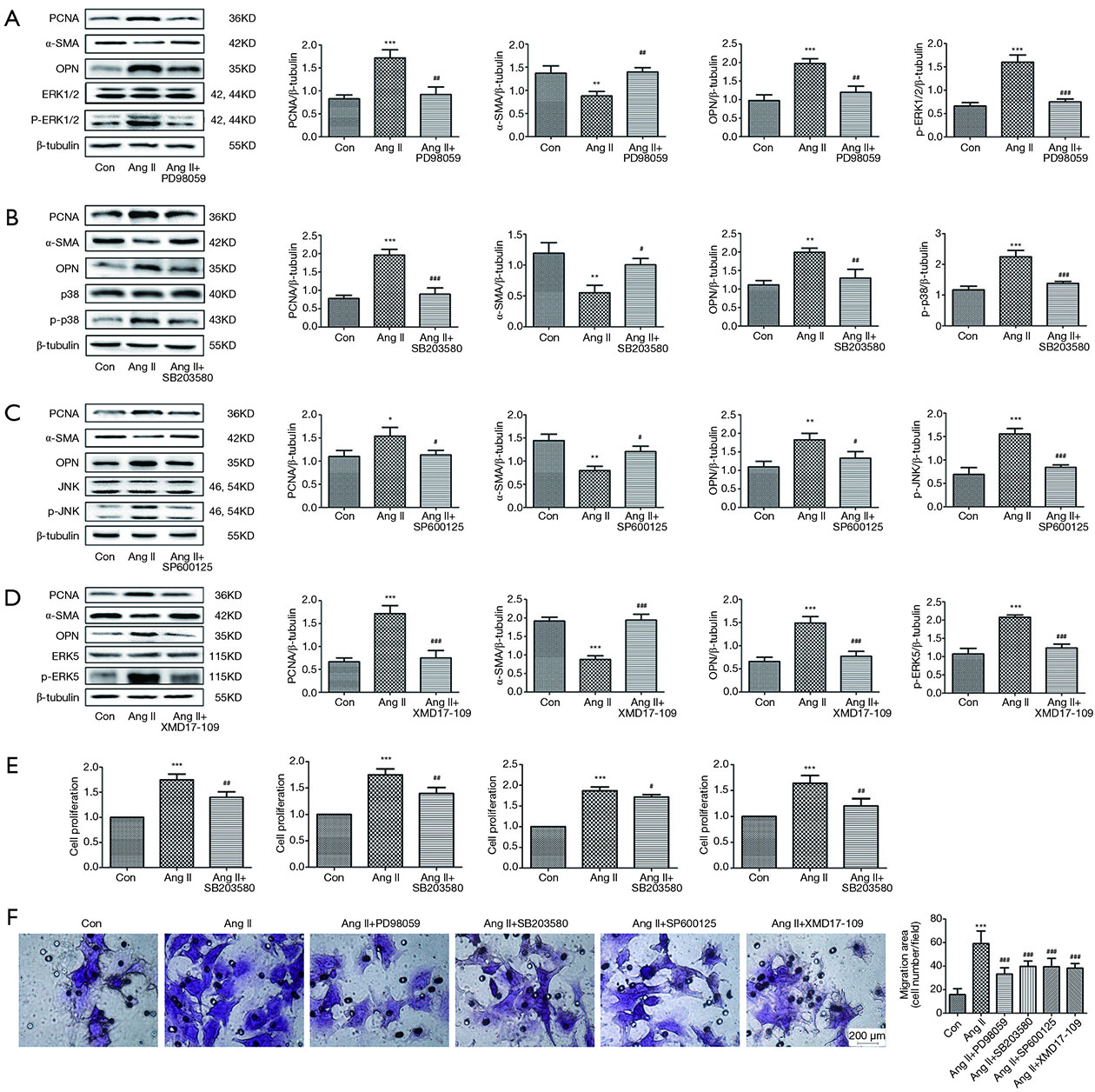 To explore the potential role of CST in VSMC proliferation and migration promoted by Ang II and to further study the possible mechanism involved, we pretreated VSMCs with CST at concentrations of 10−8 and 10−7 M, followed by Ang II stimulation. Then, we detected the effects of CST on the proliferation and migration of VSMCs promoted by Ang II and whether CST had an effect on the MAPK family signaling pathways activated by Ang II. As shown in Figure 4A, both 10−8 and 10−7 M CST positively downregulated the protein expression levels of PCNA and OPN and simultaneously upregulated that of α-SMA. From a CCK8 test, we observed that CST pretreatment decreased the proliferation rate induced by Ang II in VSMCs (Figure 4B). Moreover, compared with the concentration of 10−8 M, 10−7 M could more obviously suppress Ang II-induced VSMC proliferation (Figure 4A,B). Transwell observation showed that CST at a concentration of 10−7 M refrained the VSMC migration induced by Ang II but 10−8 M had no obvious effect on Ang II-mediated cell migration (Figure 4C). 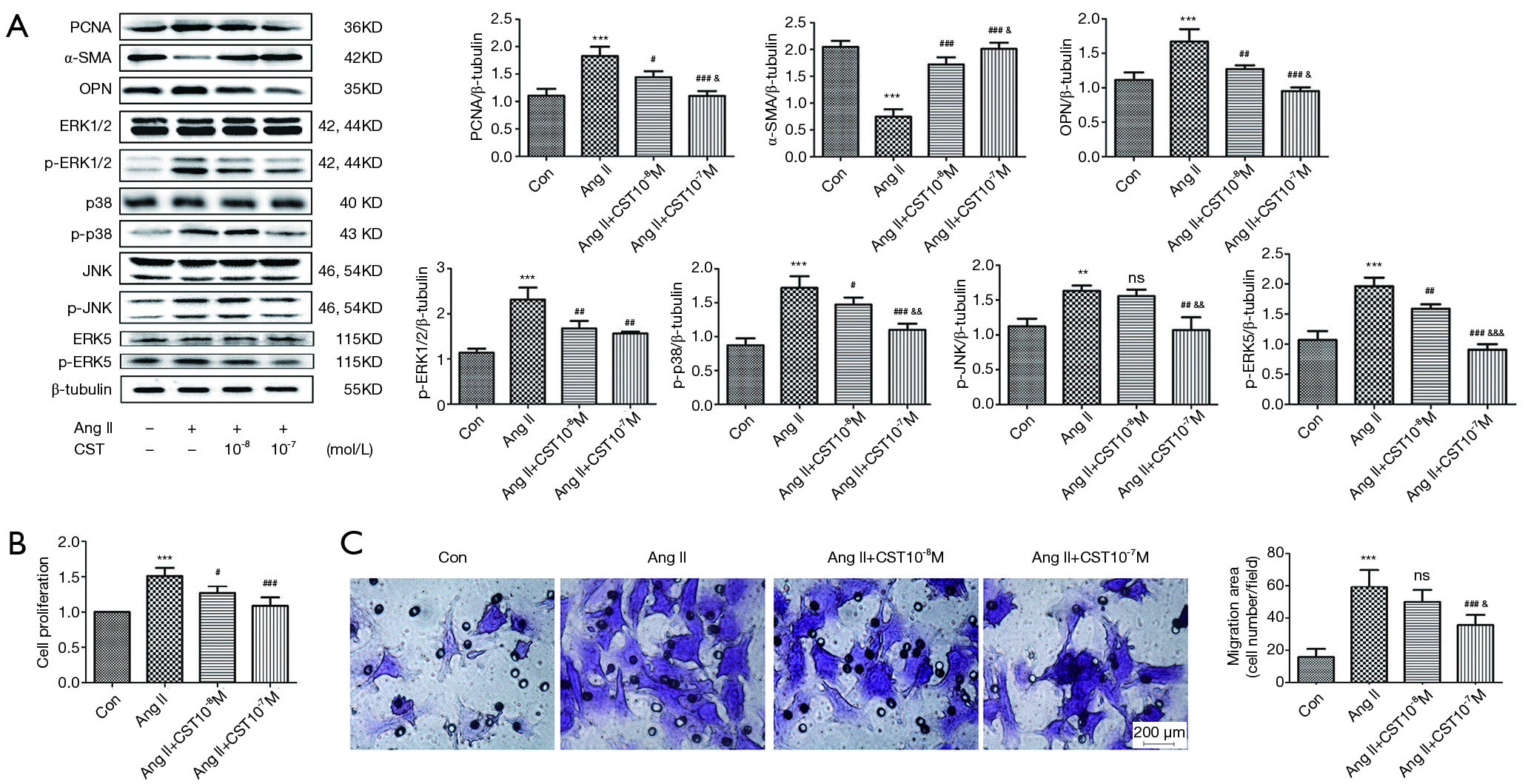 As shown in Figure 4A, pretreatment with CST downregulated the expression levels of p-ERK1/2, p-p38 MAPK, p-JNK and p-ERK5 that were stimulated by Ang II. In a detailed comparison, there was no large difference between the effects of the concentrations of 10−8 and 10−7 M of CST on the expression level of p-ERK1/2. However, for the expression levels of p-p38 MAPK, JNK and p-ERK5, there remained an obvious significant difference between 10−8 and 10−7 M CST. CST at the concentration of 10−8 M did not downregulate the expression level of p-JNK, but 10−7 M clearly did. In conclusion, CST at a concentration of 10−7 M was more impactful than 10−8 M CST to inhibit the proliferation and migration of VSMCs and the activation of the MAPK signaling pathways under Ang II conditions. These findings indicated that CST exerts the inhibitory function on Ang II-induced proliferation and migration in VSMCs, which might occur possibly via inactivating the MAPK signaling pathways.

Ethical Statement: The authors are accountable for all aspects of the work in ensuring that questions related to the accuracy or integrity of any part of the work are appropriately investigated and resolved. The animal care and experimental procedures were approved by the Animal Management Rule of the Ministry of Health, People’s Republic of China (document No. 55, 2001) and carried out in accordance with the Ethics Committee of the First Affiliated Hospital of Harbin Medical University, China.