Osteosarcoma is the most common malignancy of bones in humans, which accounts for ~2.4% of childhood tumors (1). The incidence peaks during the second decade of life, and the tumors mainly localize in the distal femur and proximal tibia (2,3). For most local lesions, osteosarcoma can be surgically cured with a 5-year survival of ~50% to 65% (4,5). Meanwhile, approximately 80% of patients have metastatic diseases (6,7), especially pulmonary metastases, which accounts for the top cause of death (8,9).

In spite of the advances achieved in the treatment, the mechanism underlying tumor progression and metastasis remains elusive. A transplanted-tumor animal model is necessary to clarify the mechanism underlying the progression and metastasis of osteosarcoma in vivo (10). A previous study reported the establishment and characterization of a model. In this study, human osteosarcoma cells were transformed with v-Ki-ras, and were producible for pulmonary colonies by intravenous injection into nude mice (11). However, an animal model with a transplanted primary solid tumor that can develop spontaneous pulmonary metastasis has been less reported.

In this study, we developed a novel human osteosarcoma cell line that was suitable for establishing a transplanted primary solid tumor and developing a spontaneous pulmonary metastasis in animals.

Human primary osteosarcoma tissues were obtained from a 16-year-old boy with osteoblastic osteosarcoma, which was in accordance with the ethical guidelines established by Shanghai Ruijin Hospital. Fresh osteosarcoma tissues (named WJ0823, P0) were dissected into small pieces (3×3×1 mm3) at 4 °C, and implanted subcutaneously into the two flanks of 6-to-8-week-old female NOD/SCID mice (P1) through a 3-mm incision. Then, tumor tissues from the xeno-grafts were dissected into small pieces (2×2×1 mm3) and implanted into the 2flanks of another NOD/SCID mouse (P2) for further passage. All animal experiments were in accordance with the approved guidelines provided by the Laboratory Animal Resource Center of Shanghai Jiao Tong University School of Medicine.

This patient’s osteosarcoma tissues including P0, P1, and P2 tissues were fixed in 10% buffered formalin and decalcified. All tissues were routinely embedded in paraffin and 3 non-sequential sections/animal were obtained. The tissues were subjected to Cal-Ex solution overnight. Then, all tissues were cut into 5 µm sections and stained with hematoxylin and eosin according to the manufacturer’s instruction.

All the slides were examined using alight microscope (Olympus BX60).

Preparation, purification, and characterization of Well5 cell suspensions from induced subcutaneous tumors at the flank of the mice

The subcutaneous tumors (P2) at the flank of the mice were harvested 6 weeks after tumor inoculation, and a single-cell suspension was prepared by digesting tumor tissue (4 mm3) with type IV collagenase for 1 h at 37 °C. Then, cells were washed in PBS3 times, and grown in DMEM Medium (Life Technologies, USA) supplemented with 10% FBS (Life Technologies, USA) at 37 °C in a 5% CO2 incubator. Flow cytometric analysis was used to distinguish between CD44+ human (BD, USA) cells and CD44− mice cells. Cells were suspended in FACS buffer (PBS containing 1% FBS, with or without 0.1% Na3N) and subsequently stained with fluorochrome-conjugated antibodies. Then, data were analyzed with either FlowJo software (Tree Star, Ashland, OR, USA) or Summit software (Beckman coulter). Finally, CD44+Cellswere sorted by MoFlo and suspended into DMEM supplemented with 2% FBS.

A scratch was made across the monolayer of Well5 cells seeded in 6-well plates. Well5 cells were seeded at a density of about 2.5×105 cells/well in complete medium (DMEM with 10% FBS). When the well was covered with Well5 cells, scratch was performed. Images of the scratches were captured at 0 and 24 h using inverted microscope (IX73, Olympus, Tokyo, Japan). CCK-8 assay (Dojindo, Rockville, MD, USA) was used to investigate cell proliferation. Briefly, 100 µL of cell suspension (5,000 cells/well) were seeded in a 96-well plate, and incubated in a humidified incubator at 37 °C for 24 h. Then, 10 µL of CCK-8 was added in each well, and incubated at 37 °C for 2 h. Finally, OD 450 nm was measured using a microplate reader.

A total of 24 BALB/c nude mice were anesthetized with ketamine (100 mg/kg). Well5 cells (1×106 cells in 200 µL PBS) were injected into the proximal tibia of the mice. The tumor size was measured every 3 days, and the primary tumors and pulmonary metastatic lesions were harvested at 4, 6, and 8 weeks after injection. The metastatic lesions were fixed in 10% formalin, and embedded in paraffin. Then, 3 non-sequential serial sections/animal were stained with HE staining form icroscopic metastasis analysis.

Luciferin was injected into the intraperitoneal cavity ~5 minutes before imaging at a dose of 150 mg/kg. Mice were then placed on the imaging stage to collect ventral and dorsal images using the IVIS (Xenogen Corp., Alameda, CA, USA). Photons emitted from the primary tumors and pulmonary metastatic lesions were quantified using Living Image software (Xenogen Corp., Alameda, CA, USA).

SPSS19.0 software package was used for data analysis. Measurement data are presented as mean ± SD of 3independent experiments. Student’s t-test for unpaired variables was used to determine statistical significance of differences between the groups, and a P<0.05 was considered statistically significant. 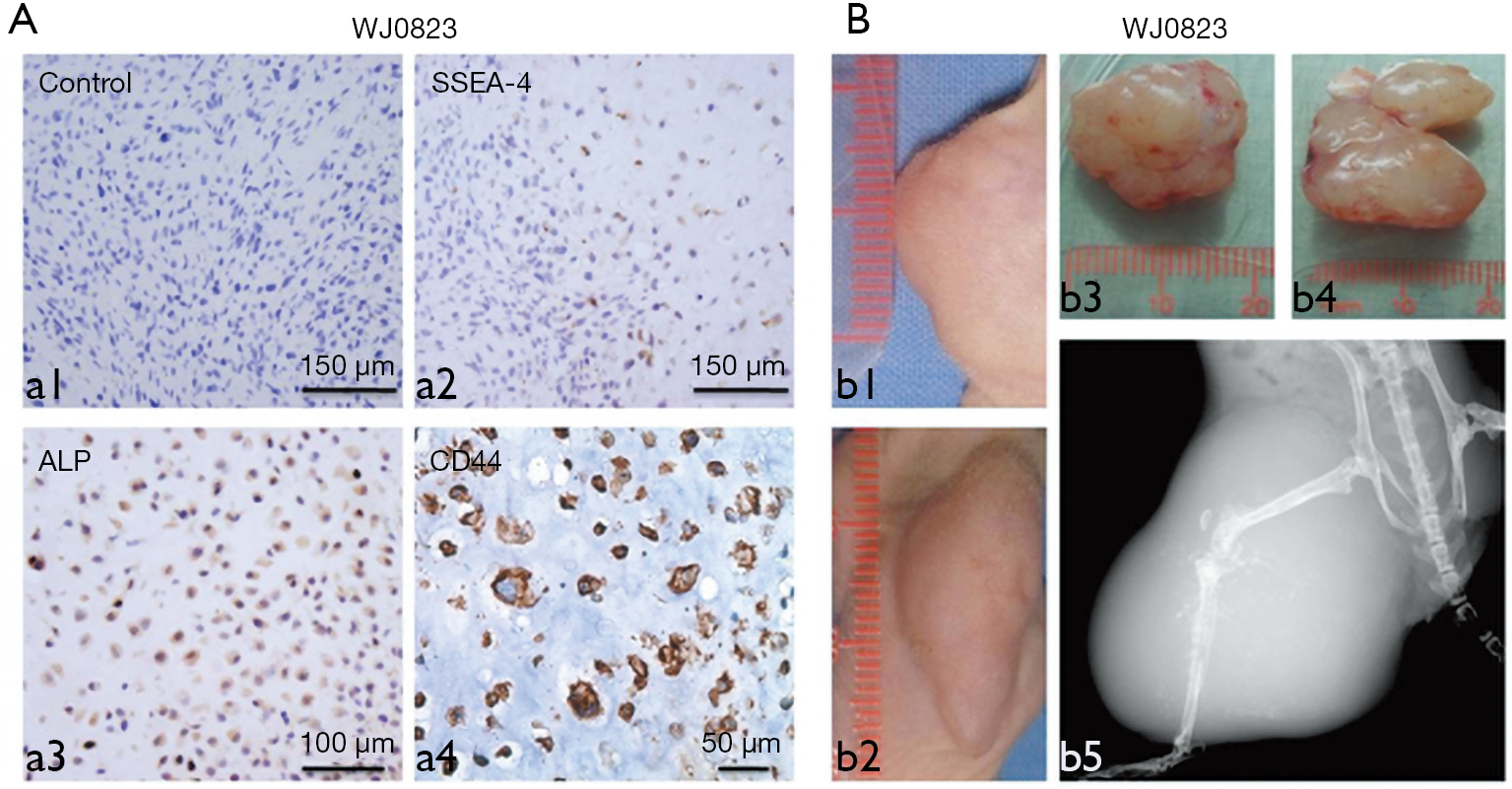 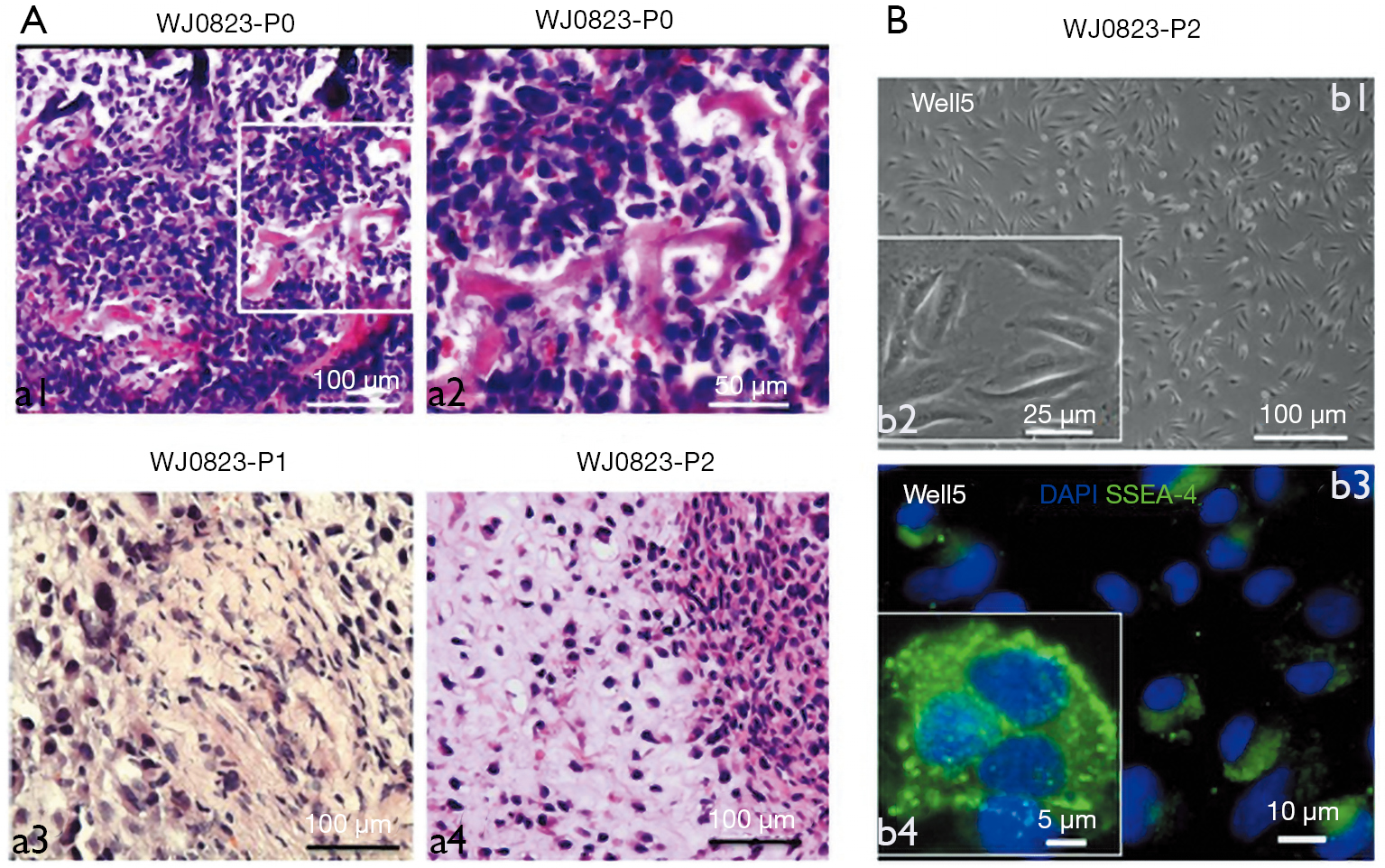 Adipogenesis, osteogenesis, migration, and proliferation of the Well5 cell line 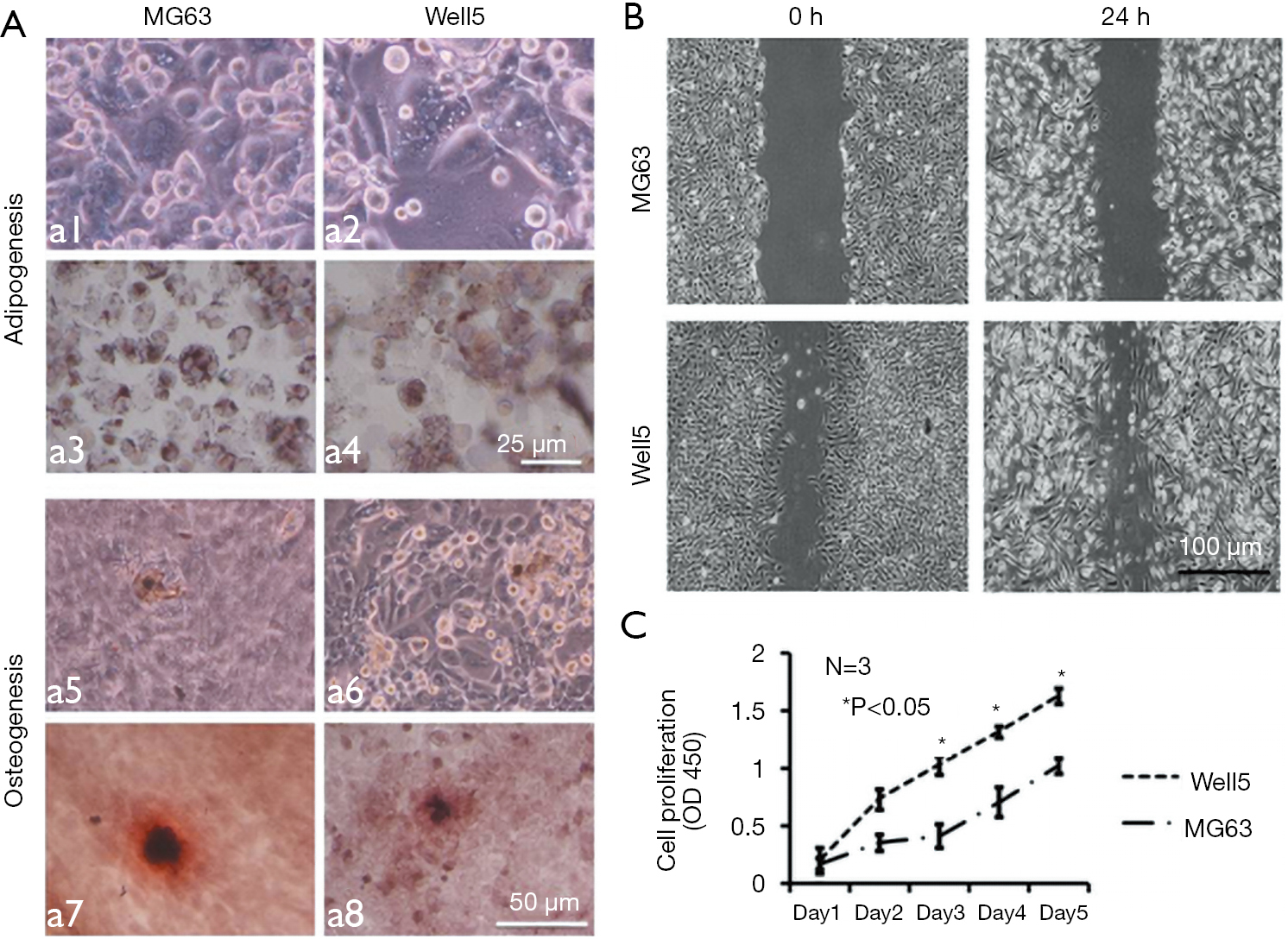 Next, the NOD/SCID mice were injected with Well5 cells to examine the ability of orthotopic tumor formation and spontaneous pulmonary metastasis development. As shown in Figure 4A and B, tumors were observed in all the mice, being firmly involved into the tibia, and extended into the soft tissues around the bone. Moreover, pulmonary metastases were observed in all the mice. As shown in Figure 4C and D, the pulmonary metastatic lesions extracted from Well5-cell-injected animals exhibited numerous surface metastases at as early as 6 weeks, which became more prominent by 8 weeks. 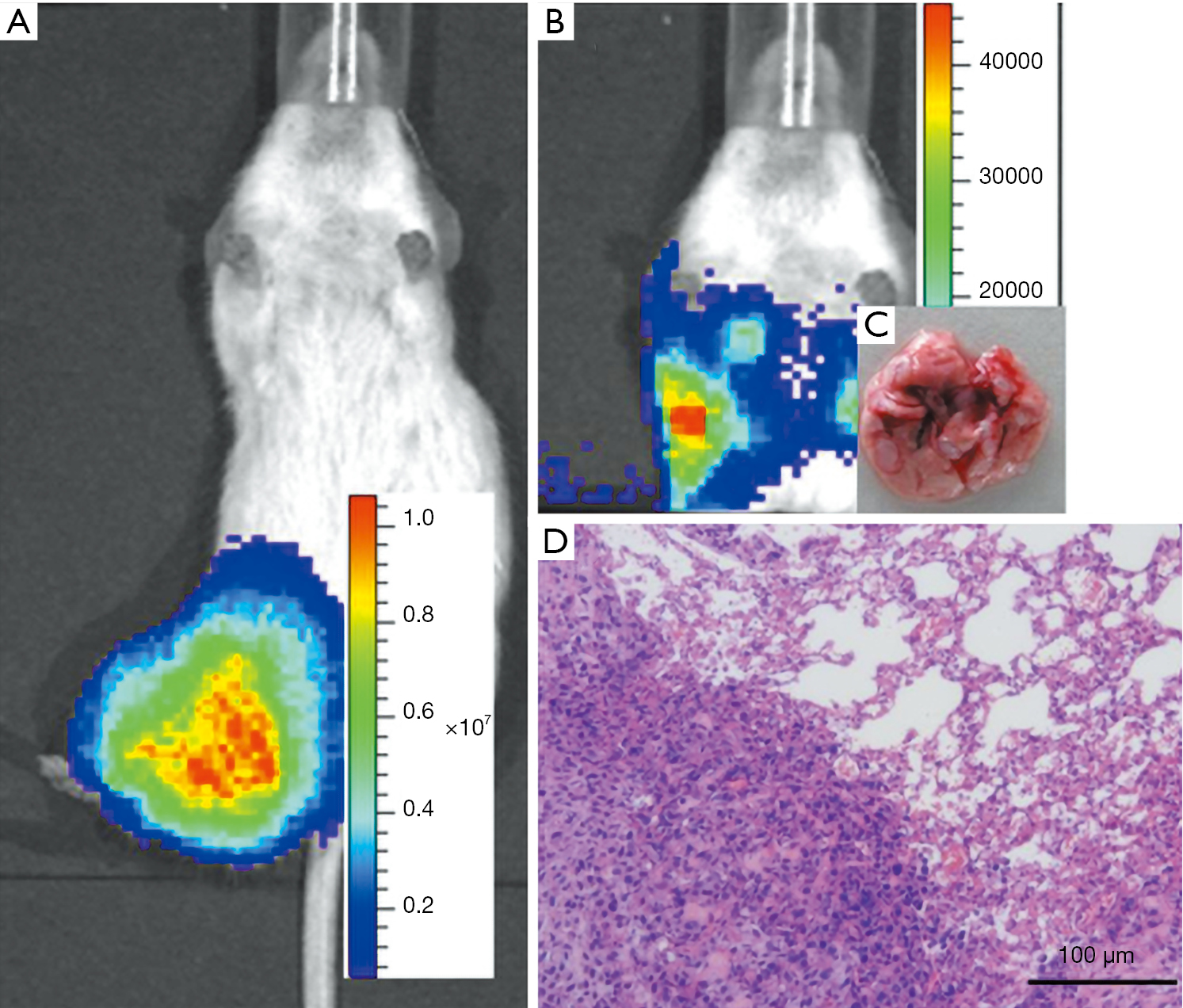 By estimate, ~10% to 20% of patients with osteosarcoma suffer from lung or bone metastasis at the time of diagnosis, and, in spite of progress achieved in recent clinical research, a large proportion of patients eventually die of pulmonary metastatic disease (12,13). There is an urgent need to develop in vivo experimental systems, which will examine tumor growth and metastasis and the development of potential therapeutic agents.

Metastatic models in experimental animals are important to clarify the mechanism underlying tumor growth and metastasis. Tumor transplantation to rodents is the conventional way to establish metastasis models (14,15). While many of these models require administration of tumor cells intravenously or subcutaneously. The establishment of human osteosarcoma animal models in nude mice has been reported in previous studies (16,17). Also, osteosarcoma was developed by injecting human tumor cells either intravenously or subcutaneously in some of these cases (18,19). These animal models might not be clinically relevant because osteosarcoma cells are not spontaneously developed. Moreover, in these cases, tumor progression and metastases do not mimic the human clinical course.

In Jia et al.’s study, it was reported that a novel cell line named Saos-LM6 was isolated after 6 repeated cycles of tumor cells in xenograft mice (16), which was featured by pulmonary metastases. Su et al. established another new highly metastatic osteosarcoma cell line named MG63.2 from the parental MG63 cells (20). In the present study, we established a novel human osteosarcoma cell line, which was characterized by the development of spontaneous pulmonary metastasis after orthotopic implant of tumor cells. In the study, we found that Well5 cells could be orthotopically transplanted into NOD/SCID mice and that this resulted in local tumor invasion surrounding tissues and numerous spontaneous pulmonary metastases in a reproducible and quantifiable manner. Furthermore, Well5 cells presented a stronger ability for adipogenesis, osteogenesis, migration, and proliferation than MG63 cells. In this model, tumor progression and metastasis followed a human clinical scenario, which makes it a promising and reliable system for the evaluation strategy against osteosarcoma, especially against post-surgical micrometastatic disease.

In conclusion, our study established a novel osteosarcoma cell line namedWell5, which possessed osteoblast-like characteristics and might be a useful model for biological studies of osteosarcoma, and the development of novel strategies against osteosarcoma.

Funding: This research was supported by the Chinese National Natural Science Foundation (No. 81172550).

Ethical Statement: All animal experiments were in accordance with the approved guidelines provided by the Laboratory Animal Resource Center of Shanghai Jiao Tong University School of Medicine. All the authors are accountable for all aspects of the work, and the questions related to the accuracy or integrity of any part of the work are appropriately investigated and resolved.