Bone marrow edema syndrome (BMES) is a painful disease with pathological increase of the interstitial fluid in bone, usually affecting a joint (1). BMES occurs preferentially in the lower extremity in men (3:1) aged 20–40 years (2). Because BMES is often diagnosed late and attempts at treatment are frequently unsuccessful, 80% of patients develop osteonecrosis (ON) 3–18 months after onset. In some cases, this even necessitates joint replacement (3-8). ON is a global health-care burden. According to this, there are 15,000 to 20,000 new cases of ON each year in the USA alone and studies showed that the average prevalence was 28.91 per 100,000 populations in Korea (9). In 2004 the number of patients who sought medical care for ON in Japan was about 11,400 (10). Besides this, Bergman et al. showed that the incidence rate was 4.7 cases per 10,000 among patients 50 years and older in Sweden in 2005 (11). Additionally, in the United Kingdom the incidence of ON ranges from about 1.4 to 3.0/100,000 including data from approximately 3.4 million active patients (12). On top of this, Zhao et al. estimated that there are 8.12 million cases with ON of the femoral head among Chinese people aged 15 years and older (13). It is thought that 10–12% of all total hip replacements are due to ON (2,14-16).

Chen et al. recently determined that female patients with ON in the proximal femur are at a higher risk of anxiety and depression (17). Anxiety and depression limit the ability to work, worsen the health-related quality of life (HrQoL), and thus lead to socio-economic problems (18). It has not yet been established whether psychological distress (anxiety and depression) plays a part in the genesis of ON or is already present in the early stages of ON (i.e., BMES).

The primary aim of the present study was therefore to investigate psychological distress and self-reported HrQoL in patients with BMES. The hypothesis was that patients with BMES that has not yet progressed to ON are more likely to suffer anxiety or depression than the normal population and also have poorer HrQoL. A secondary goal was to find out whether HrQoL or psychological distress is affected by the stage or site of the disease.

This retrospective study was conducted at the University Hospital Jena/Orthopaedic Department, Campus Eisenberg, Thuringia, Germany and included patients with the diagnosis of BMES of the proximal femur or the knee joint who were treated in our hospital in 2016 or 2017. Those whose treatment was less than 12 months ago were excluded. The selection criterion in screening the electronic medical records was diagnosis M87.* according to the International Statistical Classification of Diseases and Related Health Problems (ICD-10-GM, German Modification).

Standard treatment of patients with BMES

Following a standard treatment schemeJeny (3,19)), all patients were admitted to the hospital and received a 5-day course of intravenous Iloprost (Ilomedin, Bayer Schering, Germany). Patients with Association Research Circulation Osseous (ARCO) stage ≥2 were additionally treated with surgical decompression beforehand (4). In all patients only partial loading of the affected joint (max. 15 kg weight bearing using two forearm crutches) was permitted for 6 weeks after treatment.

All patients were given a questionnaire for self-reporting of psychological distress and HrQoL. The Hospital Anxiety and Depression Scale (HADS) was used to document anxiety and depression and the five-level version of the EuroQol Group’s EQ-5D instrument (EQ-5D-5L) to assess HrQoL. The established cut-offs described in the literature were employed to categorize patients as suffering from anxiety or depression (≥11 for anxiety and ≥9 for depression) (20). The EQ-5D-5L index was used to evaluate the EQ-5D-5L results. A mean value of 0.91 (health status of the South Australian population) was taken as reference for the normal population and corresponds approximately to the health status of the local population (21). Moreover, the visual analog scale of the EQ-5D-5L (EQ-VAS) was used. Ratings on this scale of 0 to 100 mm represent a global evaluation of the self-perceived health status, where 0 stands for the worst imaginable and 100 for the best imaginable state of health (21-24).

With regard to the primary hypothesis, psychological distress was evaluated by comparing the rates of anxiety and depression in the study group and the control cohort. Based on the parameters EQ-VAS and EQ-5D-5L index, the effect of the disease on HrQoL was compared by age group and sex between patients with BMES and the control group.

Secondarily, we analyzed the influence of disease stage and site of edema (hip or knee joint) on the results of HADS and EQ-5D-5L in the BMES group.

Of the 104 patients with the diagnosis of BMES who were identified and contacted in writing, 56 (53.8%; 26 females, 30 males) completed and returned the questionnaires. Their mean age was 55.8 years (range, 15–84 years). Further demographic and patient-specific data can be found in Table 1. 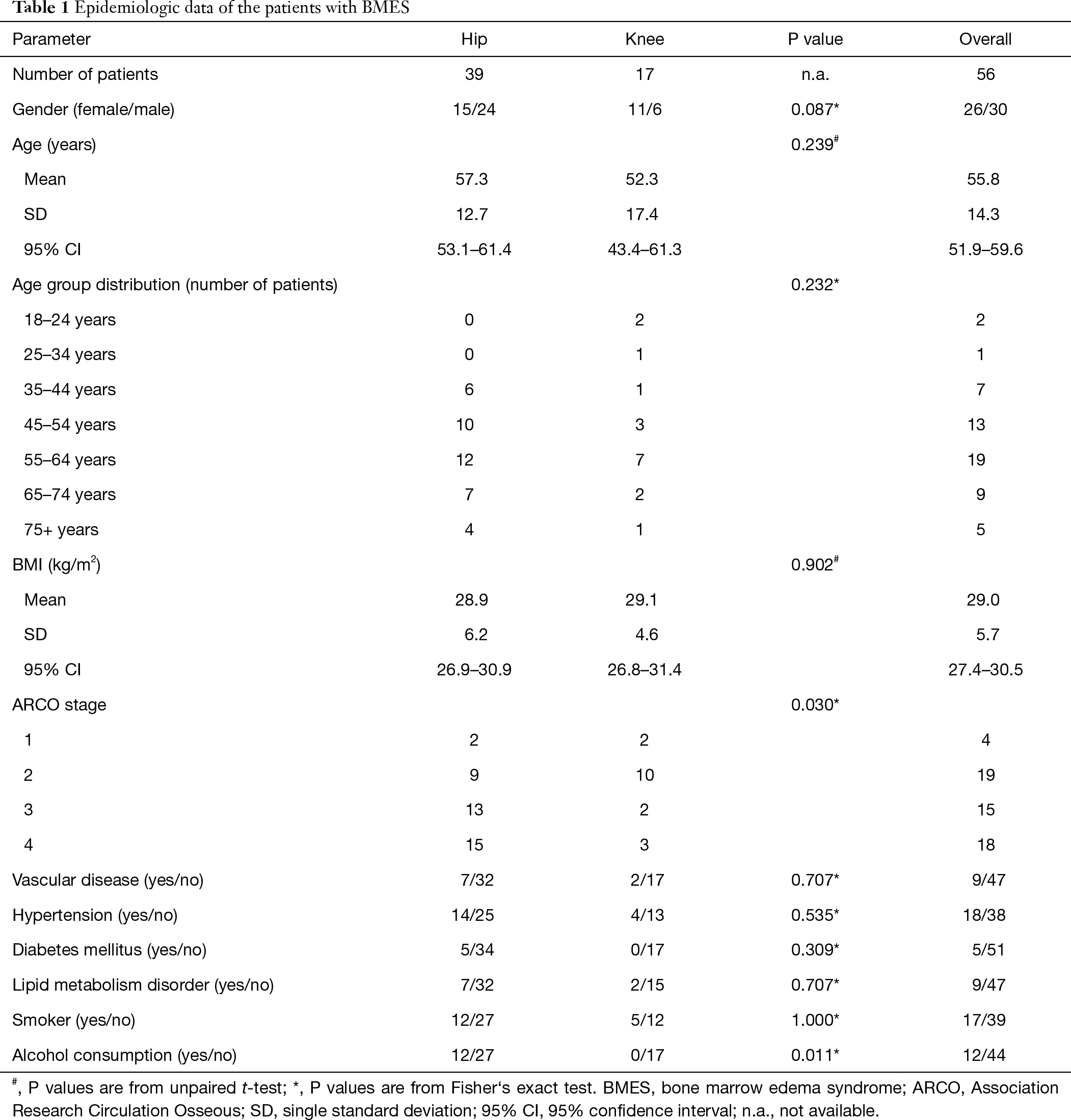 Table 1 Epidemiologic data of the patients with BMES
Full table

There was no significant difference between the study group and the control cohort in the rate of either anxiety (P=0.595) or depression (P=0.241; Table 2). 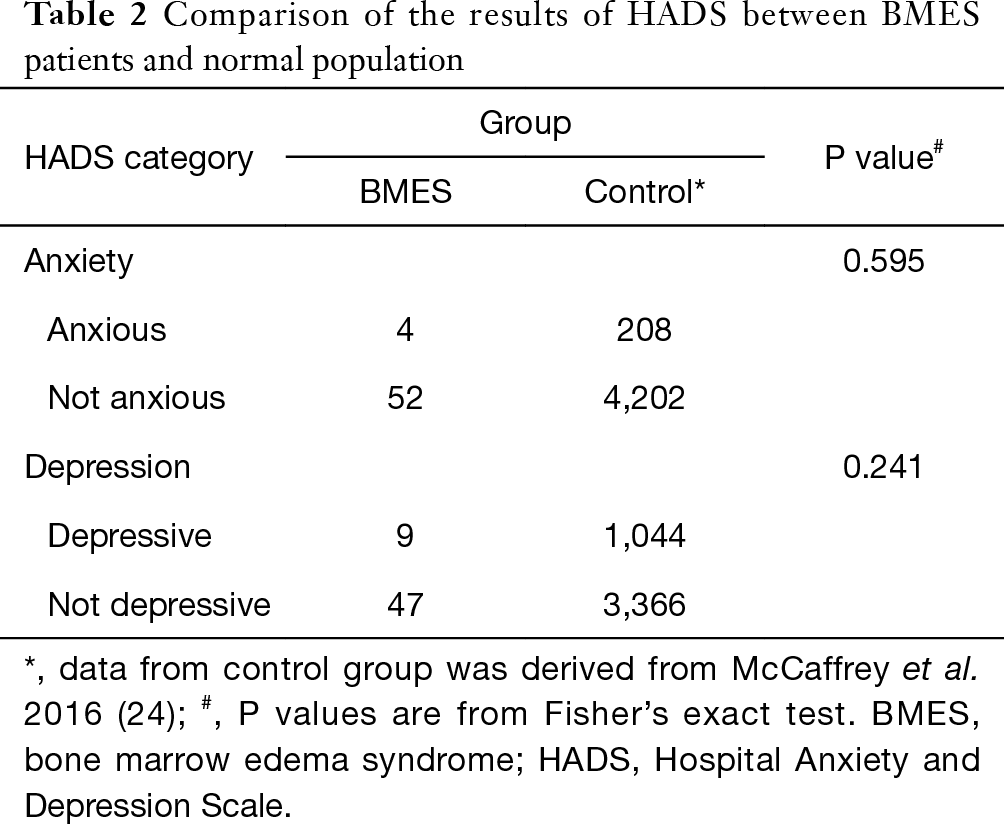 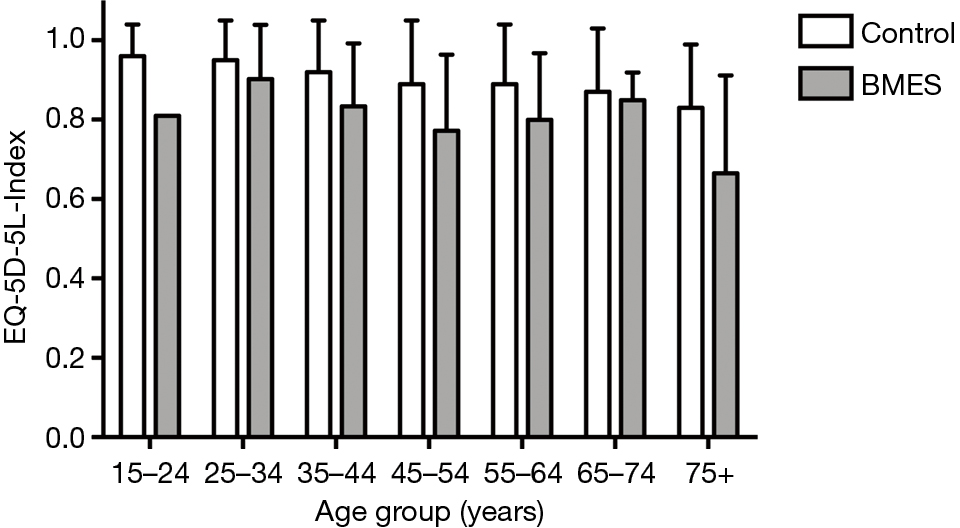 Figure 1 The age group distribution of HrQoL based on the EQ-5D-5L index of patients with BMES and the healthy population (24). The influence of age group (P=0.036) and presence of BMES (P<0.001), but not their interaction (P=0.816), had a significant influence on the results. Whiskers represent single standard deviation. HrQoL, health-related quality of life; EQ-5D-5L, the five-level version of the EuroQol Group’s EQ-5D instrument; BMES, bone marrow edema syndrome. 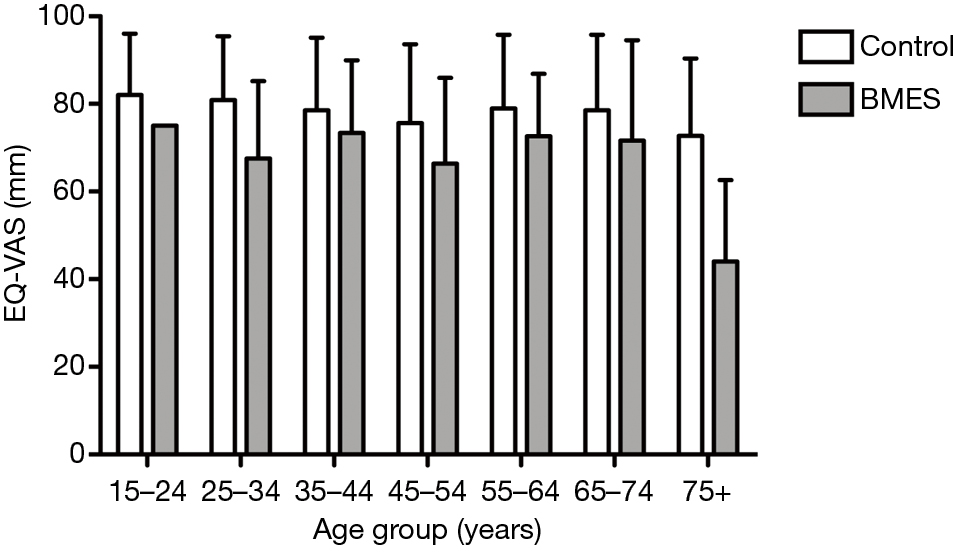 Figure 2 The age group distribution of HrQoL based on the EQ-VAS of patients with BMES and the healthy population (24). The influence of age group (P=0.040) and presence of BMES (P=0.001), but not their interaction (P=0.542), had a significant influence on the results. Whiskers represent single standard deviation. HrQoL, health-related quality of life; EQ-VAS, the visual analog scale of the EQ-5D-5L; EQ-5D-5L, the five-level version of the EuroQol Group’s EQ-5D instrument; BMES, bone marrow edema syndrome.

Influence of site and stage of disease

The influence of the site of edema and the ARCO stage on the HADS results is shown in Tables 3,4. 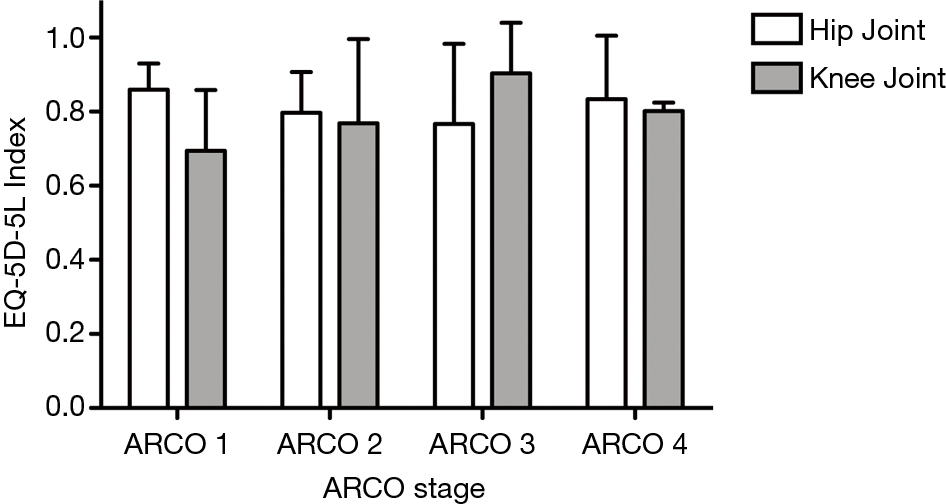 Figure 3 The ARCO stage distribution of HrQoL based on the EQ-5D-5L index of patients with BMES of the hip or knee joint. Neither ARCO stage (P=0.900), the site of BMES (P=0.738), nor their interaction (P=0.592) had a significant influence on the results. Whiskers represent single standard deviation. ARCO, Association Research Circulation Osseous; HrQoL, health-related quality of life; EQ-5D-5L, the five-level version of the EuroQol Group’s EQ-5D instrument; BMES, bone marrow edema syndrome. 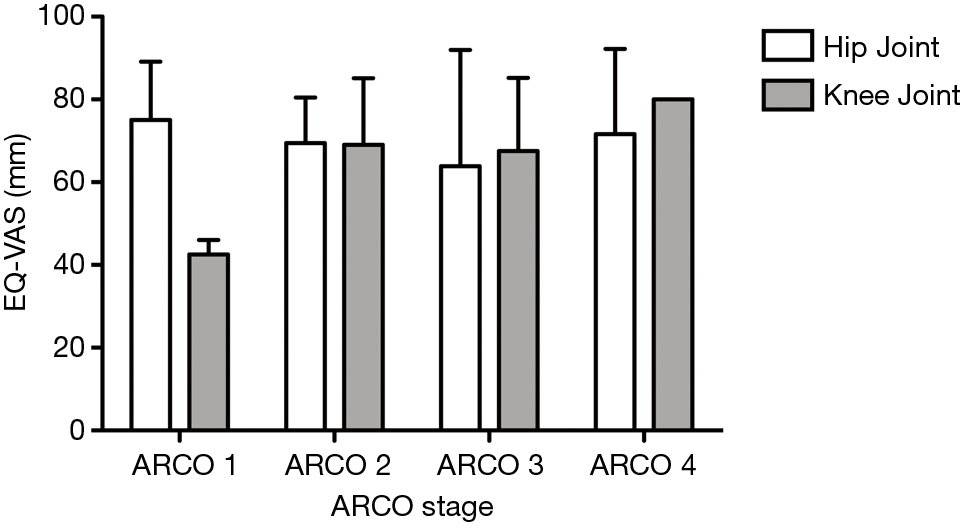 Figure 4 The ARCO stage distribution of HrQoL based on the EQ-VAS of patients with BMES of the hip or knee joint. Neither ARCO stage (P=0.501), the site of BMES (P=0.483), nor their interaction (P=0.383) had a significant influence on the results. Whiskers represent single standard deviation. ARCO, Association Research Circulation Osseous; HrQoL, health-related quality of life; EQ-VAS, the visual analog scale of the EQ-5D-5L; EQ-5D-5L, the five-level version of the EuroQol Group’s EQ-5D instrument; BMES, bone marrow edema syndrome.

The aim of the present study was to determine the psychological distress and the self-reported HrQoL in patients with BMES compared with the normal population. The secondary goal was to investigate the influence of disease stage and edema site on the outcome parameters. To the best of our knowledge we are the first to demonstrate the presence of a marked worsening of HrQoL, irrespective of age or sex, in BMES, the precursor of ON. In contrast to our hypothesis, however, the BMES patients did not show elevated rates of anxiety and depression. There was also no difference with regard to the joint involved or the radiological stage of BMES.

Earlier studies demonstrated that BMES causes pain and functional impairment (19). Our study confirms these findings in relation to the worsening of self-reported HrQoL owing to pain and functional impairment. Strikingly, the worsening of HrQoL was evident despite the elapse of at least 1 year since treatment. One explanation for this may be the fact that in many cases the detection and treatment of BMES took several weeks or even months. This can be associated with a degree of chronification of pain in the patients concerned. The International Association for the Study of Pain (IASP) defines chronic pain as “pain that has persisted beyond the normal tissue healing time (usually taken to be 3 months) (27). Thus, the typical evolution of BMES almost inevitably leads to chronic pain, which is then reflected in the HrQoL.

The prevalence of anxiety and depression in the patients with BMES was much lower than in the patients with ON described by Chen et al. (17). While the rates of anxiety (7.1%; 4/56 patients) and depression (16.1%; 9/56 patients) in BMES patients do not differ essentially from those of the normal population, the published prevalence in patients with ON seem to be much higher (anxiety: 20.4%, 44/216 patients; depression: 21.8%, 47/216 patients). It can be assumed that, due to the short duration of the disease, a chronic pain disorder has not yet developed and for this reason anxiety and/or depression have not yet progressed. It is well known from other diseases like low back pain that anxiety and depression are strongly linked to the chronicity of pain (27,28). Therefore, either anxiety or depression increase with the progression of the disease and the development of ON, or BMES is particularly likely to progress to ON in a subgroup of patients prone to anxiety and depression. Thus, one can conclude from the data that anxiety and depression are probably not causal factors for BMES, but it remains open whether anxiety, depression, and psychological distress caused by chronic pain, for example, can trigger progress to ON or whether they are a consequence of the disease. The results of a small-animal study by Henneicke et al. suggest the former. Using a mouse model, they found that chronic stress triggered an increase in serum glucocorticoid concentrations, which in turn led to increased osteoclast activity with elevation of bone resorption (29). In a recently published review, Harth and Nielson summarized data demonstrating how inflammatory joint diseases such as osteoarthritis are greatly intensified by the psychological distress resulting from chronic pain (30).

Although other risk factors such as elevated serum lipids or excessive biomechanical loading in obese patients seem to be primarily responsible for the pathogenesis of BMES (31), associations have nevertheless been demonstrated between the accepted risk factors, e.g., obesity, and psychological distress (32). However, it appears that this tends to play a relevant part in the progression to ON only with increasing duration of disease.

Our study is not without limitations. First, because the numbers of patients with anxiety or depression are relatively small, the power may be insufficient to document a corresponding difference, especially in the subgroups for ARCO stages or individual joints. Second, owing to the study design one can only speculate regarding the further progression of individual patients towards ON. Third, this was a retrospective study at an isolated point in time. No conclusions can be drawn concerning the course of the disease over time. Finally, the control cohort is from a different population (South Australia), so bias cannot be excluded with certainty. Nevertheless, the mean EQ-5D-5L index, for example, is almost identical in the two populations (South Australia vs. Germany) (21).

Ethical Statement: The authors are accountable for all aspects of the work in ensuring that questions related to the accuracy or integrity of any part of the work are appropriately investigated and resolved. The study was approved by the local ethics committee under rule number 5494-04/18/18.