Colorectal cancer (CRC) is the fourth leading cause of cancer-related death worldwide, and approximately 30% of CRC have been identified in the rectum (1-3). While early screenings can significantly reduce cancer morbidity (4), many cancers are diagnosed at middle or late stage, which led to a high mortality and recurrence rates. For locally advanced rectal cancer, chemoradiotherapy (CRT) prior to surgery has been established as the standard of care (5). A great amount of evidence showed that preoperative CRT significantly prevents the progress of cancers and improves overall survival of cancer patients, compared with surgery alone (6-13).

Currently, locally advanced rectal cancer is a widely accepted indication of preoperative CRT for rectal cancers (9,14). Therefore, accurate preoperative staging of rectal cancer is critically important for CRC treatment. Nowadays, imaging methods including computed tomography (CT) and magnetic resonance imaging (MRI) are the main approaches to evaluate preoperative staging of CRC. MRI, due to excellent soft tissue contrast, is powerful for the identification of mesorectal node involvement as well as assessment of the circumferential resection margin (15-20). Compared to CT, which has approximately 60% of accuracy of the assessment of lymph node involvement (21), MRI showed 80% of accuracy in determining lymph node involvement in CRC patients (15,22). Therefore, one fifth of RC patients with lymph node metastases (LNM) are still underdiagnosed as clinically node-negative CRC and may miss the opportunity of preoperative CRT even MRI is used for preoperative staging of CRC.

Therefore, preoperative imaging alone is insufficient for accurate evaluation of lymph node involvement in CRC patients. New tools and evaluation system are highlighted to improve the assessment of lymph node involvement in CRC patients. Numerous factors have been proposed for the assessment of LNM in previous study, such as depth of submucosal invasion, lymphovascular invasion, high-grade mucin production, signet ring features, T-stage, and poorly-differentiated adenocarcinoma (23-29). However, most of these risk factors were based on the results from resected specimen, which were obtained postoperatively and may be inappropriate for preoperative staging of CRC.

In this study, we analyzed a number of preoperatively clinical factors, which were selected to develop a nomogram for preoperative prediction of LNM in clinically lymph-node negative rectal cancer patients. Our results are useful for physicians to screen CRC patients for preoperative CRT.

Statistical analysis was conducted using the R software (version 3.0.1; http://www.Rproject.org). The packages in R that were used in this study are reported in the data supplement. Descriptive statistics were computed for all variables. The least absolute shrinkage and selection operator (LASSO) method was used to identify predictive factors from the primary data set, weighted by their respective coefficients. Multivariate analyses of selected suboptimal risk factors associated with LNM were conducted using the logistic regression analysis. Bidirectional elimination was done to fit regression models based on the lowest Akaike information criterion. A prediction nomogram was established based on multivariate logistic regression analysis. Decision curve analysis was conducted to determine the clinical usefulness of the nomogram by quantifying the net beneﬁts at different threshold probabilities. P values less than 0.05 were considered statistically significant. 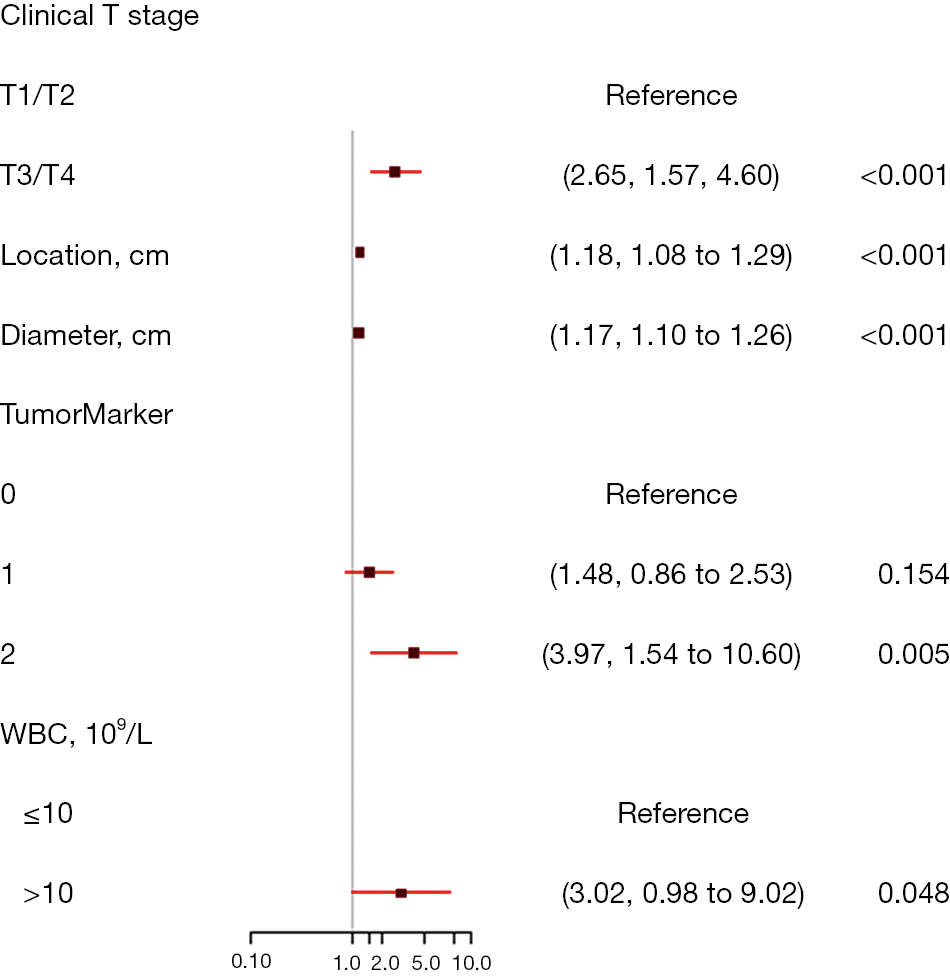 Development and validation of an individualized prediction model 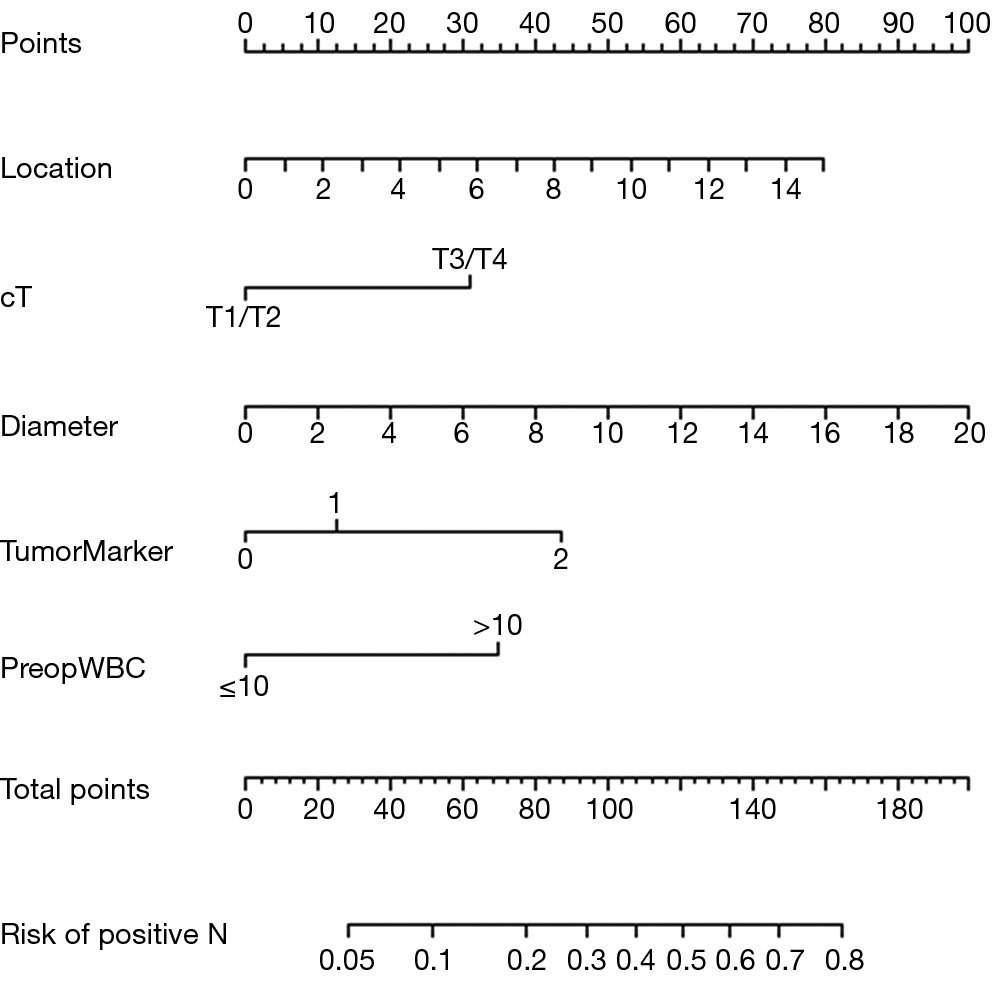 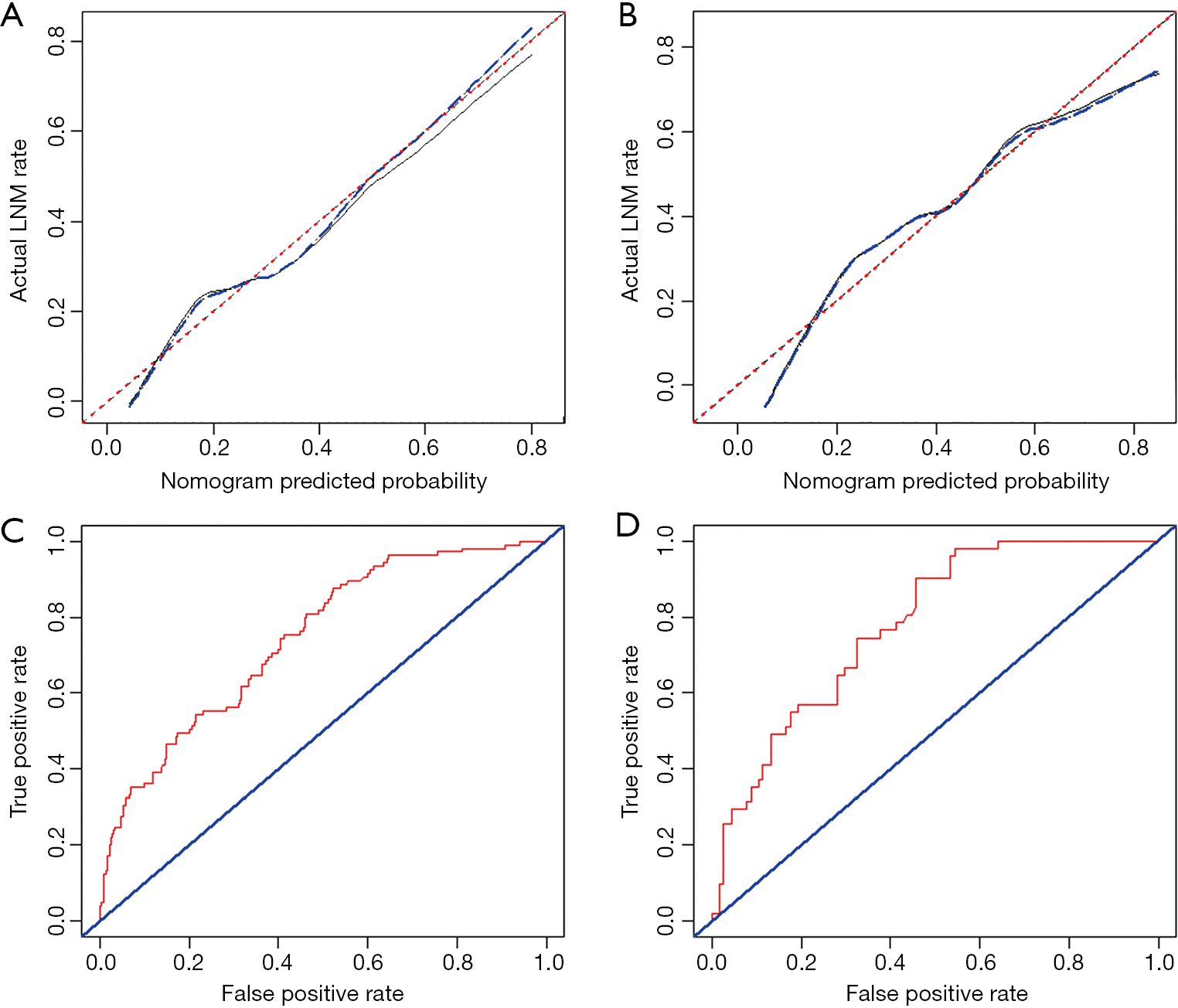 Figure 4 (A,B) Calibration curves of the developed nomogram in each cohort. (A) Calibration curve of the nomogram in the training cohort. (B) Calibration curve of the nomogram in the validation cohort. The x-axis represents the predicted probability from the nomogram, and the y-axis is the actual probability of LNM in clinically node-negative rectal cancer patients. The dashed line indicates that predicted outcome perfectly corresponds with actual outcome. The blue line indicates the bias-corrected accuracy of the nomogram while a closer fit to the diagonal dotted line represents a better prediction. (C,D) Receiver operating characteristic (ROC) curve. (C) ROC curve in the training cohort [area under the curve (AUC): 0.743]. (D) ROC curve in the validation curve (AUC: 0.777). Diagonal segments are produced by ties. LNM, lymph node metastases.

The decision curve analysis of the nomogram showed that the nomogram adds more benefit to LNM prediction in clinically node-negative rectal cancer patients than either the treat-all-patients scheme or the treat-none scheme when the threshold probability of a patient or doctor is between 5% and 70% (Figure 5). The true and false positive rates in each risk threshold were also shown in Figure 5.

Figure 5 (A) Decision curve analysis of the predicted nomogram model. The Y-axis measures the net beneﬁt. The red line represents the predicted nomogram model. The green line represents the assumption that all clinically node-negative RC patients had LMN. Thin black line represents the assumption that no patients had LMN. The net beneﬁt was calculated by subtracting the proportion of all patients who are false positive from the proportion who are true positive, weighting by the relative harm of forgoing treatment compared with the negative consequences of an unnecessary treatment. The decision curve showed that the nomogram adds more benefit than either the treat-all-patients scheme or the treat-none scheme to predicting postoperative AL when the threshold probability of a patient or doctor ranges between 10% and 67%. (B) The true positive rates and false positive rates in each risk thresholds. The black light represents the true positive rates of the model, while the red light represents the false one. LNM, lymph node metastases.

MRI is recommended as the best imaging approach for clinical staging of rectal cancer (15). However, MRI, which is not capable of detecting metastatic lymph nodes <3 mm, exhibits an accuracy rate of 80% for predicting lymph node involvement (15,22). In this study, the false negative rate of MRI for predicting lymph node involvement ranged from 20% to 30%, which is consistent with previous reports. The limitations of existing imaging tools may exclude prospective patients from CRT because of missing diagnoses of LNM. Therefore, finding other methods to assess accurate status of regional lymph node involvement in rectal cancer patients is of great importance. In the present study, we aimed to establish a clinical scoring system based on preoperative parameters to accurately assess the status of lymph nodes in clinically node-negative rectal cancer patients.

Nomograms have been widely used to visualize risk factors and prognosis in CRC patients (30,31). In our study, six potential predictors from 13 risk factor candidates were used to establish a nomogram by shrinking the regression coefficients using the LASSO method, which has been recommended for variable selection (21,32). Then, the multivariate logistic regression model was used for the determination of the optimal predictors (33,34).

T classification, which is an index of the depth of tumor invasion, has been well recognized as one of the most important predictors of LNM for CRC (24,35-38). A study based on 804 cases reported that the percentage of lymph node involvement arises from 5.7% to 78.8% accordingly when the T classification increases from 1 to 4 (36). In our study, we found that the clinical T classification is a significant independent predictor of LNM in clinically node-negative rectal cancer patients, which is consistent with previous studies.

CEA and CA19-9, which are the most common tumor markers of CRC, have been currently utilized in clinical practice for cancer screening and follow-up (43,44). Previous studies have fully demonstrated that increased levels of CEA and CA19-9 were risk factors of tumor recurrence and anti-tumor agent resistance (45). A study based on 130 CRC patients revealed that elevated CEA and CA19-9 were significantly correlated with lymph nodes involvement (45). In the present study, our results also suggest that the elevation of these two preoperative tumor markers were predictors for LNM.

The white blood cell count (WBC) was a widely used marker of infection and inflammation (48). Numerous studies have demonstrated that inflammation is involved in tumorigenesis and metastasis (49), mainly through changing the systemic immune status and local microenvironment (50), which is partially reflected by the abnormalities of WBC count (51). Several studied have found that more WBCs were associated with carcinogenesis, tumor progression and cancer mortality (48,51-53). Our study suggests that elevated WBC level was an ominous prognostic sign of LNM.

While several studies evaluated predictors for LNM, no study focused on the prediction of LNM in clinically node-negative rectal cancer patients. In this study, we established a nomogram consisting of 5 clinical factors. The decision curve showed that our nomogram is better than either the treat-all-patients scheme or the treat-none scheme in LNM prediction when the threshold probability of a patient or doctor ranges between 5% and 70%. The nomogram-derived probability was also calculated for better usage. For example, the sensitivity and specificity were 75% and 56%, respectively, in the training cohort, and 90% and 45%, respectively in the validation cohort, when a 20% risk of LMN was set as the nomogram-derived probability cut-offs. These results suggest the high sensitivity and specificity of our nomogram in identifying CRC patients who need CRT. Thus, our nomogram, which has up to 75% of accuracy of detecting LNM, provides supplemental information for individual clinical decision, which can be used to properly enroll CRC patients for CRT.

There are several limitations in our study. For instance, our study did not fully take advantages of the MRI examination. Recently, radiomics, which incorporate the features of imaging examination, has emerged in the field of cancer research (21). The nomogram including imaging features may be more convincing than using the result of MRI examination alone. Besides, 30% of rectal cancer patients were initially considered to be node-positive but were negative in the pathology report, and these patients might be overtreated (21). Therefore, it is of great importance to develop models for preoperative individualized assessment of LN metastasis in clinically node-positive patients, which requires our further investigation.

In conclusion, we established a nomogram consisting of five preoperative clinical factors for individualized prediction of LNM in clinically node-negative rectal cancer patients. Our nomogram is useful for enrolling CRC patients for CRT. 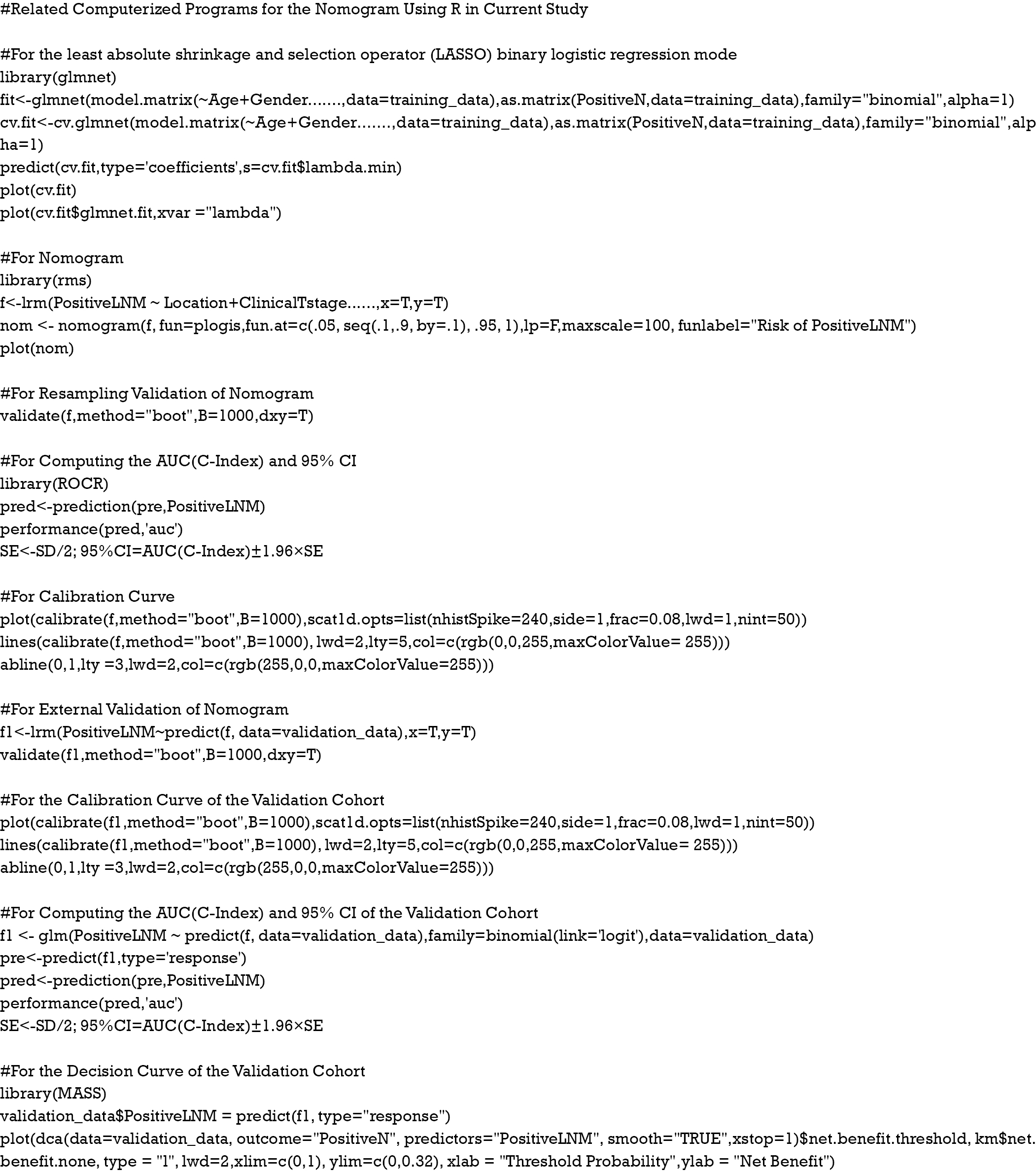 Ethical Statement: The authors are accountable for all aspects of the work in ensuring that questions related to the accuracy or integrity of any part of the work are appropriately investigated and resolved. This study was approved by the Institutional Review Board (IRB) of The Sixth Affiliated Hospital of Sun Yat-sen University. All patients provided written informed consent to participate in this study.