Comparison of the effects of photon, proton and carbon-ion radiation on the ecto-calreticulin exposure in various tumor cell lines

Radiation therapy (RT) plays an important role in treating various malignancies. Whether the intent is palliation or radical cure, radiation used to be considered as a local therapeutic modality through direct killing of tumor cells. However, in recent years, many pre-clinical and clinical researches have revealed the abscopal effect of RT (1). RT can induce tumor regression in unirradiated regions through indirect anti-tumor immune response (2).

Immunogenic cell death (ICD) of tumor cells is critical in triggering tumor antigen-specific immune response. ICD refers to those cell death forms that can be recognized by the immune system and induce strong anti-tumor immunity (3). Preclinical studies in various human and mouse tumors have demonstrated that RT can induce ICD of tumor cells characterized by the expression of damage associated molecular patterns (DAMPs) (4).

One of the most potent DAMPs released by dying cells after irradiation is the membrane exposure of calreticulin (CRT). CRT is a Ca2+-binding lectin chaperone that is mostly located in the ER lumen (5). When CRT translocated to the surface of dying cells, the ecto-CRT, it can serve as an “eat me” signal for neighboring phagocytes, which plays a pivotal role in activating anti-tumor immunity (6,7). Ecto-calreticulin exposure is strongly correlated with the immunogenicity of tumor cell death induced by chemotherapy as well as RT (8). Thus, elucidating the factors that affect ecto-CRT exposure of tumor cells post-irradiation is the key to study the anti-tumor immunity of RT. It is also of great important for further exploration of the combination of radiotherapy and immunotherapy.

Nowadays, ionizing particle radiotherapy, including proton and carbon-ion, is the most advanced and effective RT technology, which has advantages over conventional photon radiation in the treatment of malignancies (9). Ionizing particle can generate stronger radiobiological effects than photon, cause more complicate DNA double strand breaks, resulting in a stronger tumor-killing effects, especially for those photon-resistant tumors (10,11). However, there is limited knowledge of the impacts of different types of radiation beams on immune response. In particular, the differences between ionizing particles and conventional photon beam in inducing ecto-CRT exposure are not well studied yet.

For photon irradiation, adherent tumor cells in log-growth phase were plated in T25 flasks and irradiated with a 225 kVp X-ray beam (PXi precision X-RAD 225) at a dose rate of 3.198 Gy/min as the method previous reported (12). The linear energy transfer (LET) of X-ray was about 2 keV/µm.

For proton and carbon-ion irradiation, cells were also plated in T25 flasks (Corning, NY, USA). Then using the IONTRIS intensity-modulated raster scan system with the energy of 173.27 MeV, for proton, and 333.82 MeV/u, for carbon-ion, to irradiate the flasks at the Shanghai Proton and Heavy Ion Center (SPHIC), Shanghai, China. The LET was approximately 1.9779 keV/µm for proton and 29.1351 keV/µm for carbon-ion. The beam line was horizontal, and the Bragg Peak of proton and carbon-ion were adjusted to the surface where cell attached with solid-water (see Figure S1).

The irradiation doses, irradiated with photon, proton and carbon-ion, were all physical doses. All the cells, including those mock-irradiated ones, were then washed with fresh medium and incubated at 37 °C with 5% CO2.

Irradiated and mock-irradiated (control group, 0 Gy) cell lines were detected at 12, 24, and 48 h after irradiation. Cells were harvested, washed twice with cold PBS. Then cells were incubated in cold blocking buffer (5% FBS in PBS) for 15 min, followed by washing and incubation with monoclonal antibody. Surface exposure of CRT (ecto-CRT) was evaluated by staining with primary labeled monoclonal antibodies (PE-conjugated, specific for human only, Abcam, ab83220). Each sample was then examined by flow cytometer (Guawa easyCyte) to identify ecto-CRT exposure. Flow cytometric data were analyzed by FlowJo software (version 10,FlowJo, LLC, Ashland, Oregon, USA). Forward scatter (FSC) versus side scatter (SSC) plots were gated in order to exclude cellular debris. Median of fluorescence intensity (MFI) was used to compare ecto-CRT exposure among different groups. 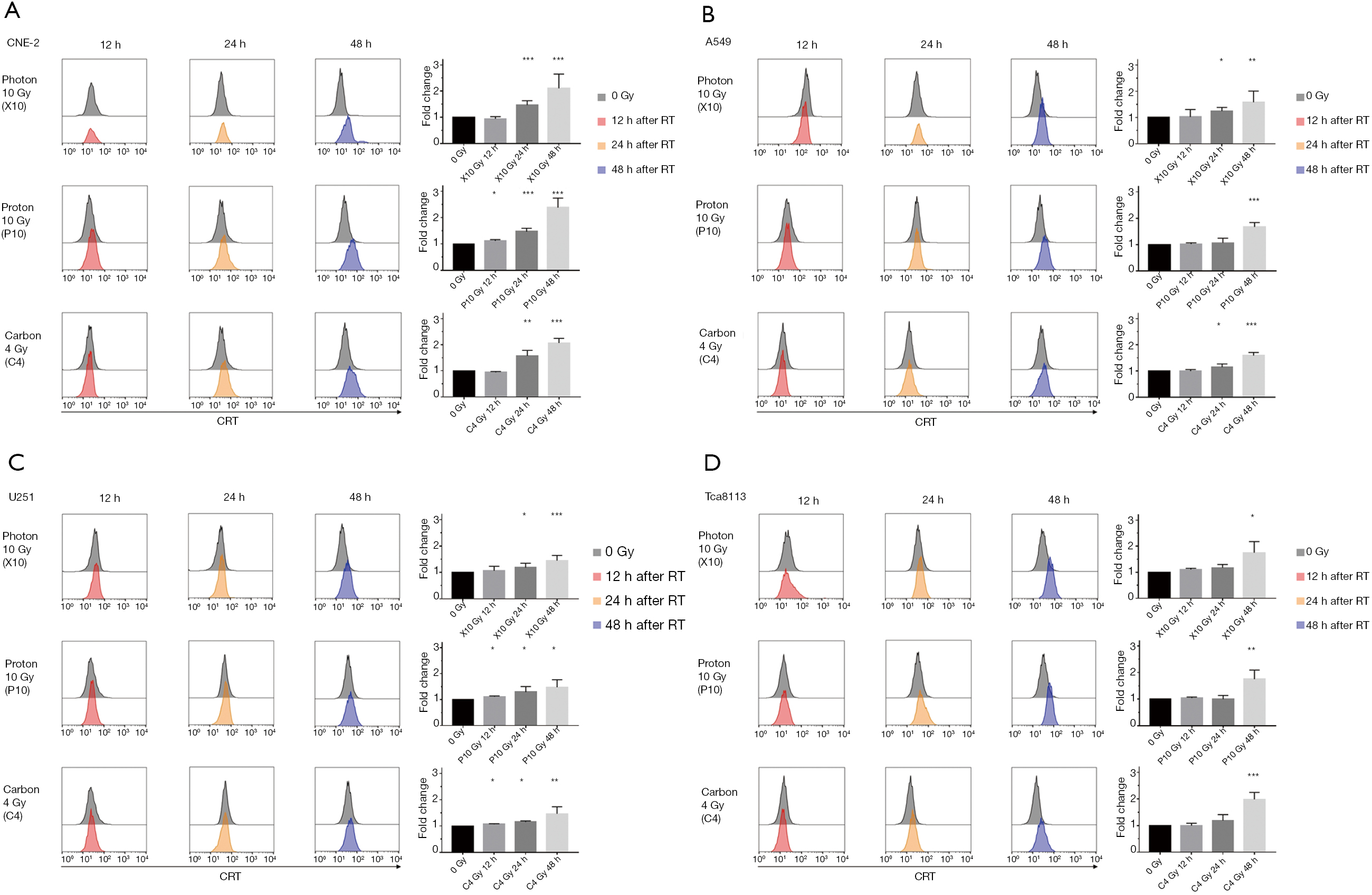 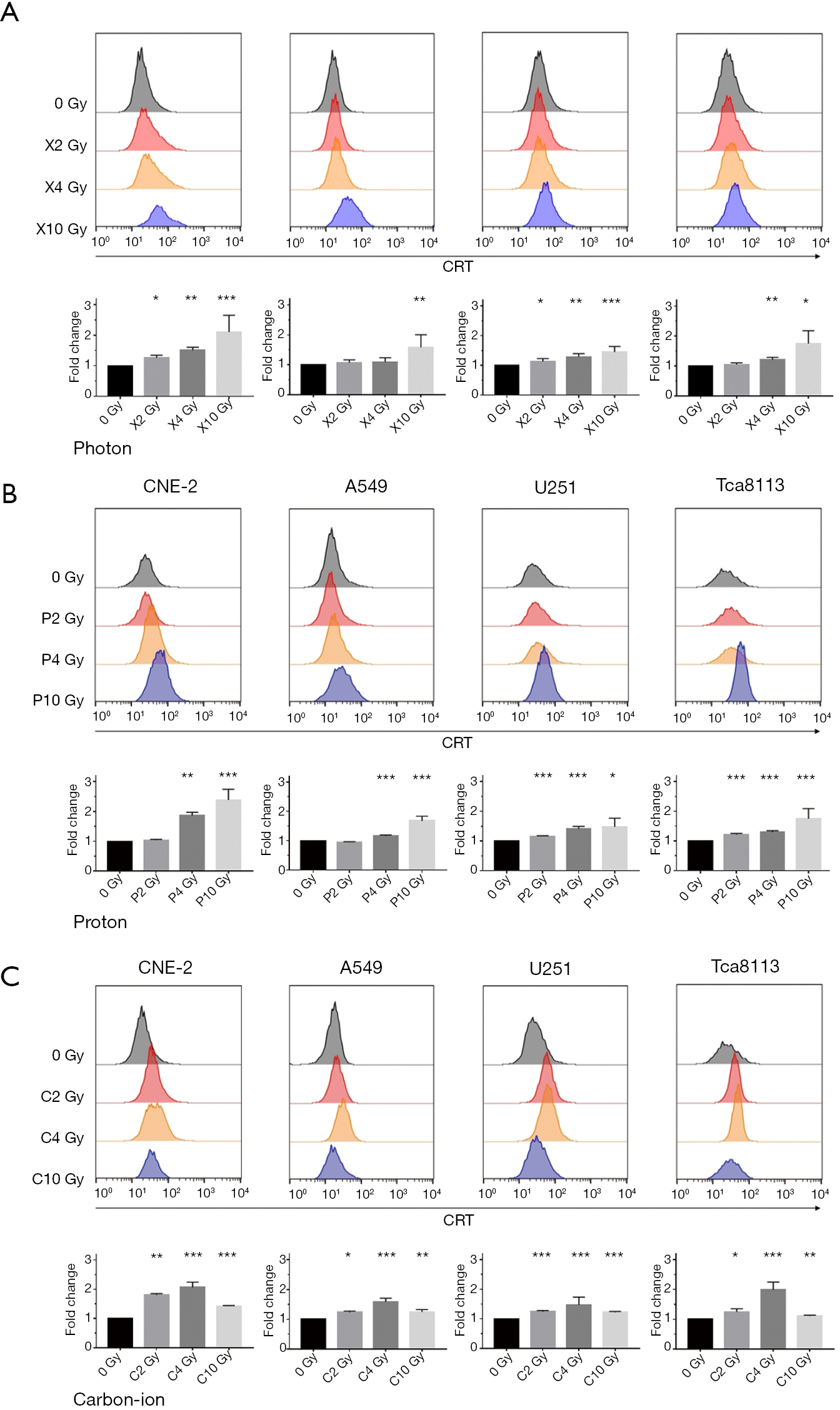 Figure 2 Comparison of ecto-CRT exposure with different physical doses. Four human cancer cell lines were mock-irradiated (0 Gy) or exposed to 2, 4 and 10 Gy with photon, proton and carbon-ion beams, respectively. The exposure levels of ecto-CRT were evaluated by flow cytometry at 48 h after irradiation. The bar chat represented the fold change of median fluorescence intensity (MFI) of each irradiated group compared with control group (0 Gy). All the groups were repeated at least three times with similar results. The results are expressed as the mean ± SD of independent experiments. *, represents P<0.05; **, represents P<0.01; ***, represents P<0.001. CRT, calreticulin. 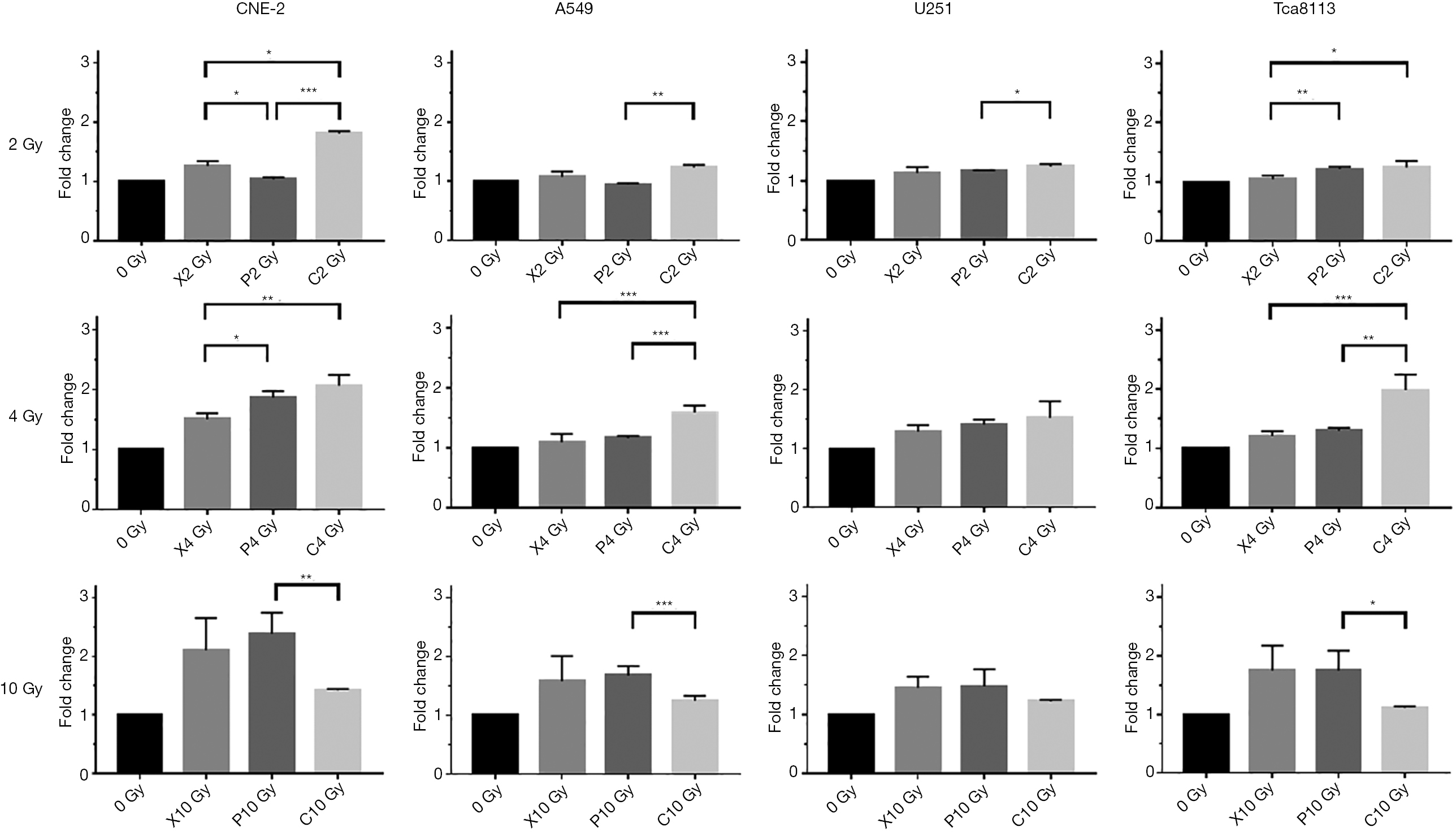 Figure 3 Comparison of ecto-CRT exposure with same physical doses but with different types of beams. Four human cancer cell lines were mock-irradiated (0 Gy) or exposed to 2, 4 and 10 Gy with three types of RT beams, respectively. The exposure levels of ecto-CRT were evaluated by flow cytometry at 48 h after irradiation. All the groups were repeated at least three times with similar results. The results are expressed as the mean ± SD of independent experiments. *, represents P<0.05; **, represents P<0.01; ***, represents P<0.001. CRT, calreticulin.

Nowadays, a growing body of research have reported the abscopal effect and the anti-tumor immune response contributed by RT (13). Induction of immunogenic cancer cell death has become one of the major aims of RT (14), because it would be of benefit not only to treat distant and occult metastasis but also to eradicate radiation-resistant cancer cells and cancer stem cells. As the frontier technology of RT, proton and carbon-ion therapy may provide a promising future to conquer cancer. However, the effectiveness of proton and carbon-ion to trigger immune response against dying tumor cells remain unclear. This present study evaluated the level of ecto-CRT exposure in four human cancer cell lines treated with photon, proton and carbon-ion, providing the reference for future research related to ICD induced by RT, especially for proton and carbon-ion irradiation.

As mentioned before, CRT plays an important role in ICD and inducing effective anti-tumor immune response. The ecto-CRT functioned as an “eat-me” signal, promoting the phagocytosis of dying tumor cells by DCs (6). Blockade of ecto-CRT or knockdown of CRT will annihilate the immunogenicity of cell death (8,15). Furthermore, for clinical study, some researches have reported the diagnostic and prognostic value of CRT in various tumor (16-19). It was found that high CRT expression on tumor cells was associated with a higher density of infiltrating mature DC and effective T cells, accordingly with a better prognosis in lung cancer patients (20). However, the ecto-CRT exposure level in patients after treated with RT, especially proton and carbon-ion, was lack of study, because of the difficulty to obtain tumor samples post-RT. Thus, we conducted this in vitro experiment, trying to figure out the post-irradiated ecto-CRT exposure in tumor cells treated with RT, especially with proton and carbon-ion.

When comparison of ecto-CRT exposure with different doses of each radical beam, we found that photon and proton induced ecto-CRT exposure with dose increasing. However, carbon-ion exhibited a different manner, it increased most ecto-CRT exposure at C4Gy rather than C10Gy or C2Gy (Figure 2). These results indicated that each radical beam has an optimal dose to induce ecto-CRT as well as ICD of tumor cells. It has already been studied in photon irradiation that only using a proper range of fractionation dose (7–15 Gy), RT can be immune-stimulatory, otherwise it may induce no immune response or even immune-suppressive effects (24-27). As we compared with carbon-ion, proton and photon irradiation, we must take the relative biological effectiveness (RBE) into consideration. The RBE of proton is considered as 1.1 (28). So proton usually showed a similar biological effect with photon, so did in our research. Previous research also demonstrated that proton shared a common immunogenic modulation with photon (29). However, carbon-ion was thought to have favorable biological property with a higher RBE value as 2–3 (30,31). Our previous study suggested that the RBE of carbon-ion is 2.5 for CNE-2 cell line (12). So carbon-ion 2 and 4 Gy physical dose are equivalent to 4–6 and 8–12 GyE equivalent biological dose. While carbon-ion 10 Gy physical dose might be equivalent to 20–30 GyE equivalent biological dose. Thus, when compared three types of radical beams in iso-physical dose, we found that carbon-ion has stronger effects on increasing ecto-CRT than proton and photon at low dose (2, 4 Gy), but changed oppositely at high dose (10 Gy) (Figure 3). We assumed that C10Gy physical dose is relatively too high for inducing ICD of tumor cells, so cells exposed to such high dose radiation may go through a different death pattern. Further study is warranted to elucidate the mechanism underlying this phenomenon.

In this study, we included four human carcinoma cancer cell lines. When compared the fold change of ecto-CRT irradiated with iso-physical dose (Figures 1 and 2), we found that the increase of ecto-CRT is tumor-dependent. RT with each type radical beam can increase more ecto-CRT exposure in radiation-sensitive tumor cell, such as nasopharyngeal carcinoma (CNE-2) and tongue squamous carcinoma (Tca-8113), than radiation-resistant cell, like glioblastoma (U251) and lung adenocarcinoma (A549). It suggested that tumor cells may have different immunogenicity when treated with RT. In addition, the RBE values of different tumor are quite different. As we previously reported, the RBE of carbon-ion in CNE-2 cell line was 2.5 (12). While for U251 cell line, the RBE of carbon-ion was only 1.43 (32). Thus, it was reflected in our results that carbon-ion did not significantly increase more ecto-CRT exposure than proton and photon for U251 cell line when compared with iso-physical dose (Figure 3).