In the latest definitions for sepsis and septic shock (Sepsis-3), Sepsis is defined as life-threatening organ dysfunction caused by a dysregulated host response to the infection. Septic shock is a subset of sepsis with circulatory and cellular/metabolic dysfunction associated with a higher risk of mortality (1-3). Nowadays, septic shock is one of the major healthcare problems, affecting and killing millions of people around the world every year (4,5). Similar to acute myocardial infarction, or stroke, early identification and appropriate management in the initial hours after sepsis developing can improve the prognosis.

In septic shock, when volume resuscitation fails to restore mean arterial pressure (MAP), vasopressors such as dopamine, norepinephrine, epinephrine, dopexamine, will be used, either alone or in combination (6,7).

There have been some meta-analysis studies for comparing these vasopressors in 28-day mortality (8-13). The result of these studies showed that norepinephrine was probably the best regimen. The latest network meta-analysis was published in May 2019. In the meta-analysis conducted by Cheng et al. (14), the studies comparing levosimendan with comparators were included in their study, however, levosimendan promotes the vasodilatation (15), which is different from the vasopressors in the management of septic shock. Actually in those included studies (16-24), they not only used single levosimendan as a group [norepinephrine (16-21,23), or dopamine (22) was also added to maintain the blood pressure]. Moreover, three randomized controlled trials (RCTs) included in their study combined placebo with/using other standard therapy as a group (25-27). So in our study, we excluded the studies above, and mainly talked about “vasopressor”. We did this network meta-analysis and tried to find out what kind of regimens of vasopressors could be more appropriate for treating patients with septic shock in clinical practice.

Two investigators independently reviewed the identified abstracts and selected articles for full reviewing, and the discrepancies were resolved by the third reviewer. The reference lists of eligible studies and relevant papers were also manually searched and reviewed. The search terms were “septic shock” and “vasopressor”, etc. The search terminal date was 2019/4/22. Finally we found 2,517 articles, excluding 1,374 duplications, then we included 46 articles through reading the title and abstract, and 31 studies (28-39) were (40-58) included by reading the whole articles (Figure 1). 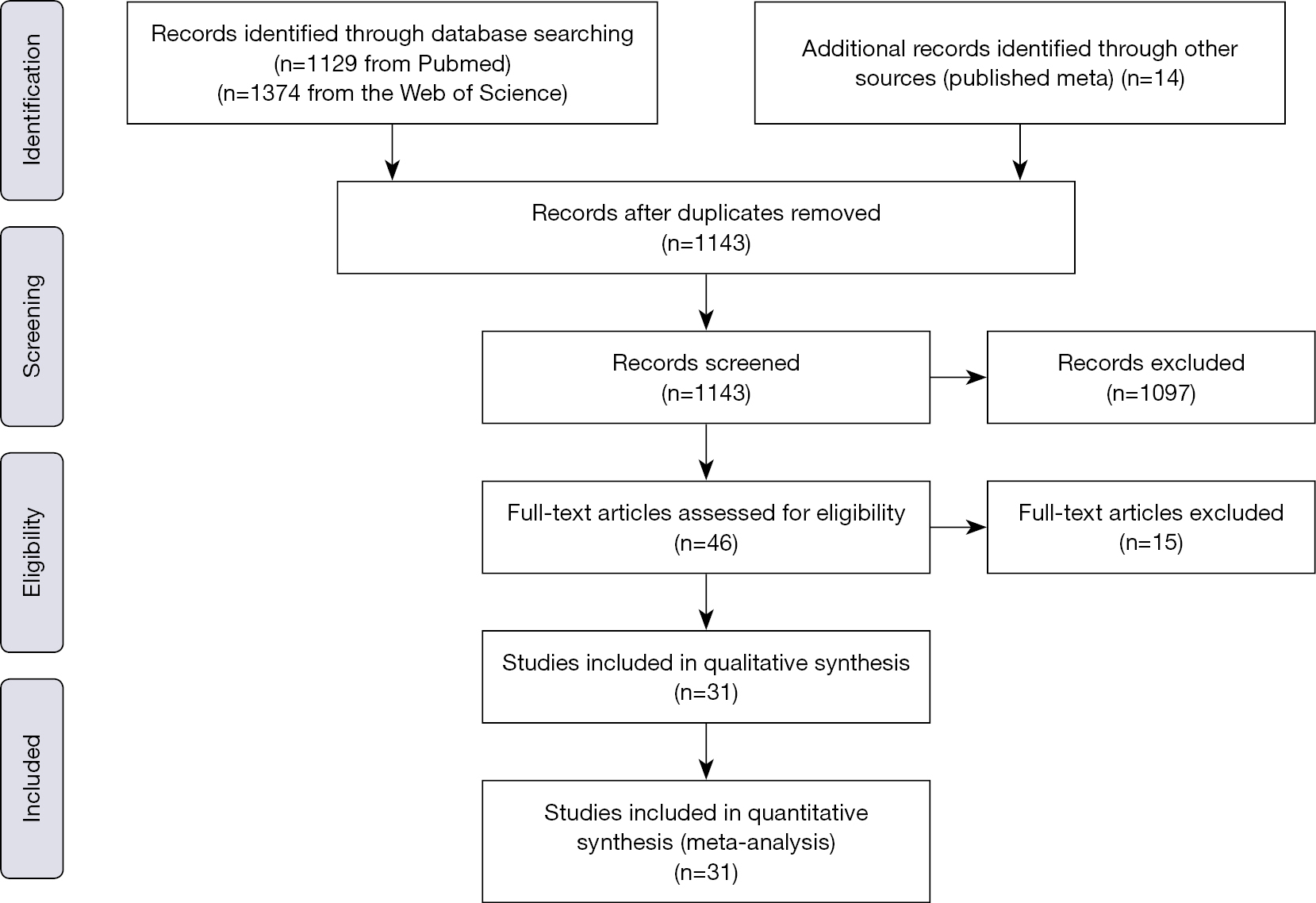 Two authors independently reviewed the identified abstracts and selected articles to full review. The third reviewer addressed the discrepancies. For each selected publication, the following baselines and study characteristics were extracted: first author, publication year, country, participant characteristics, total number of patients in experiment and control group, age of patients in each group, other baseline characteristics, and the treatment dose of each medication in these studies were concluded below (Tables 1,S1). Primary outcome measure was the 28-day mortality, secondary outcome measures were the incidence of arrhythmia, and increased heart rate. This study is a network meta-analysis, so it does not need ethics approval. 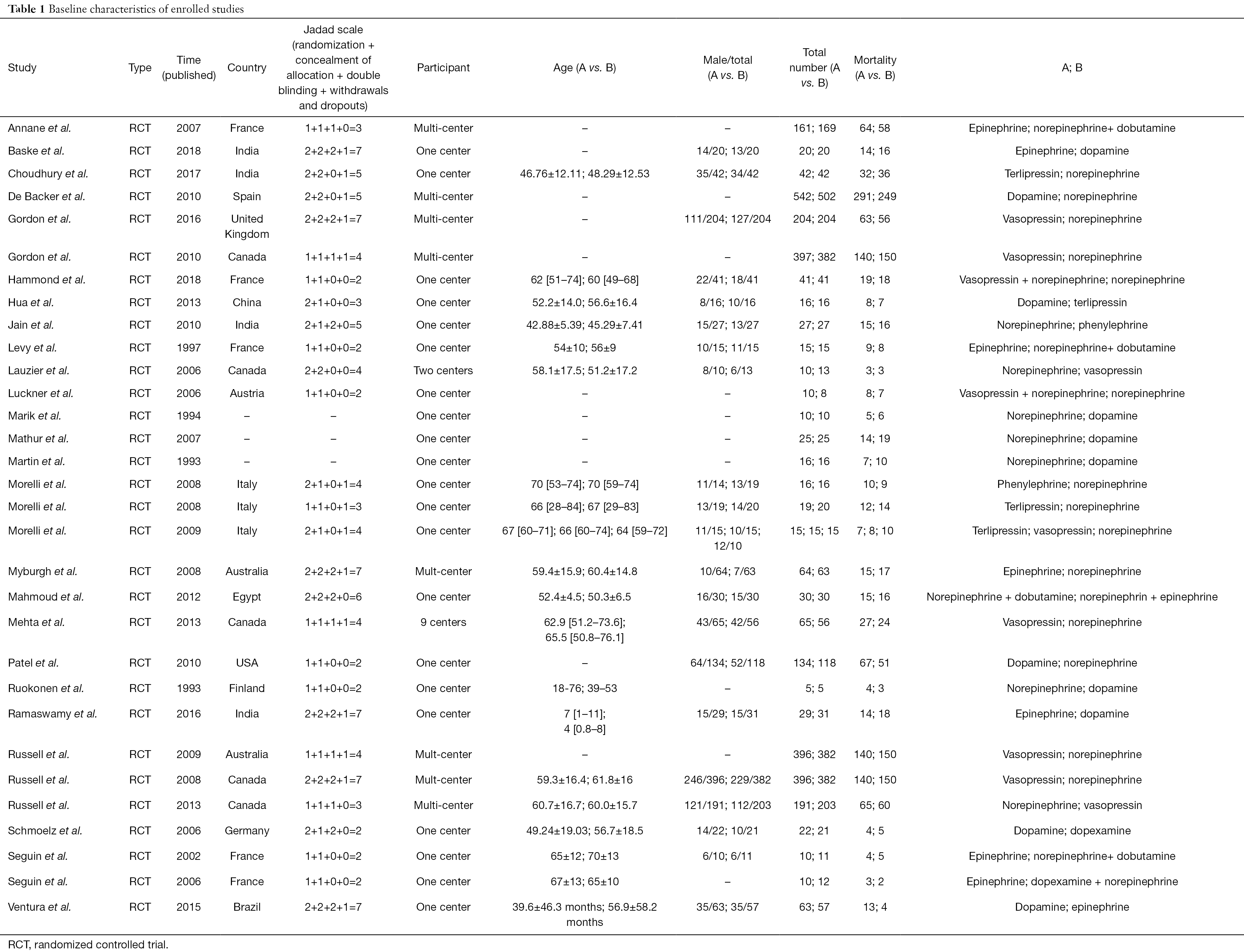 Risk of bias of trials included in this meta-analysis was assessed according to the Jadad scale, in the following domains: random sequence generation, allocation concealment, blinding of participants and personnel, and completed withdrawals and dropouts.

We pooled data and used odd ratios (OR), confidential interval (CI) for the dichotomy outcome: the 28-day mortality, incidence of arrhythmia. We used mean difference (MD), CI for the continuous outcome: heart rate. All statistical analyses were carried out with Stata 15.1.

In our study, we totally included 31 RCTs with 5928 patients about what kind of regimens of vasopressors could decrease the 28-day mortality in patients with septic shock. The quality of the article evaluations was as followed. The Jadad Scales of all included studies ranged from 2 to 7, and the studies included in our study were all well-prepared RCTs (Table 1).

In network meta-analysis, we didn’t compare the heterogeneity in the study, but we made an inconsistency test to find out whether the data of these studies could be mixed and calculated. The inconsistency test showed that the comparison could be performed by consistency (P>0.05) (Table 2). 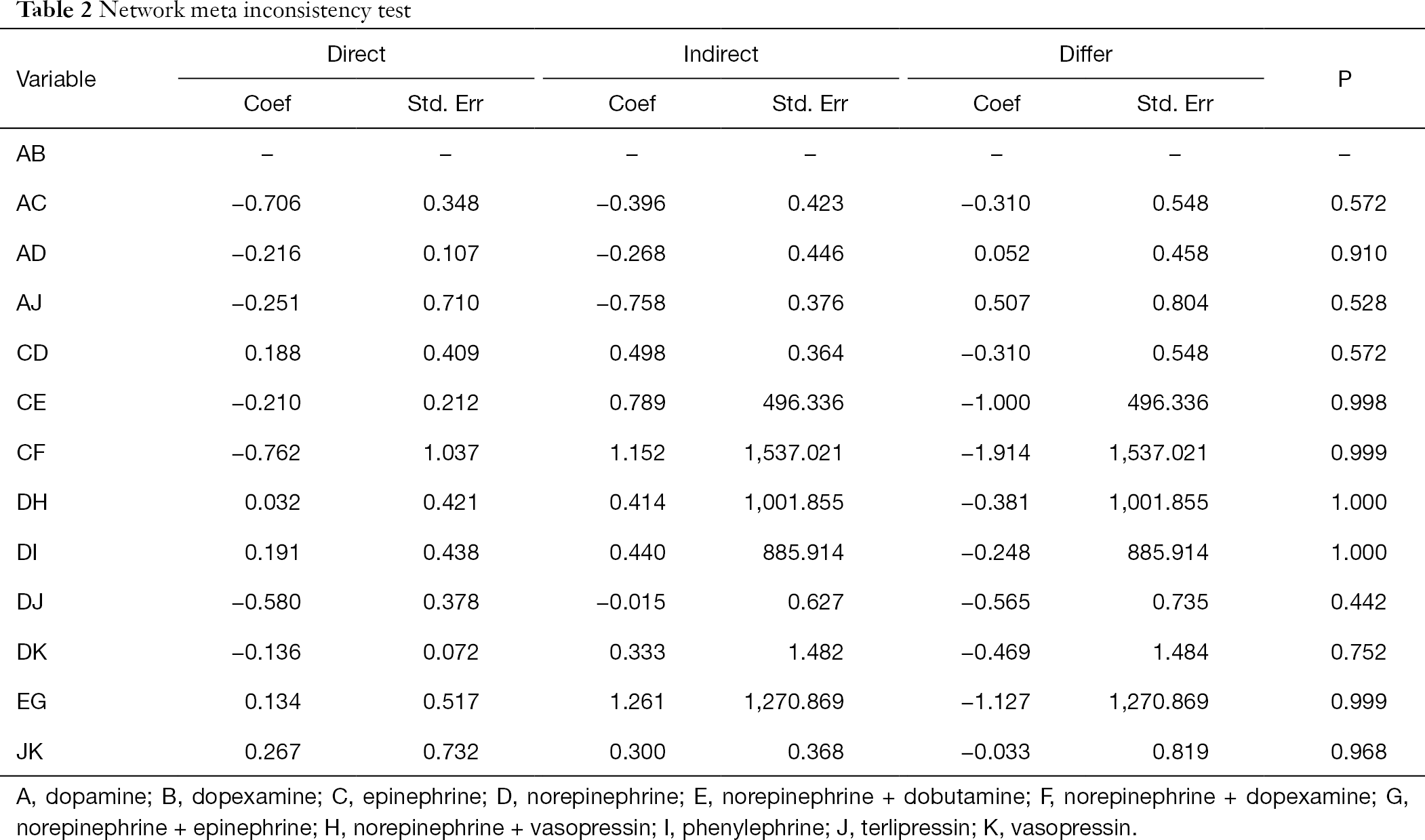 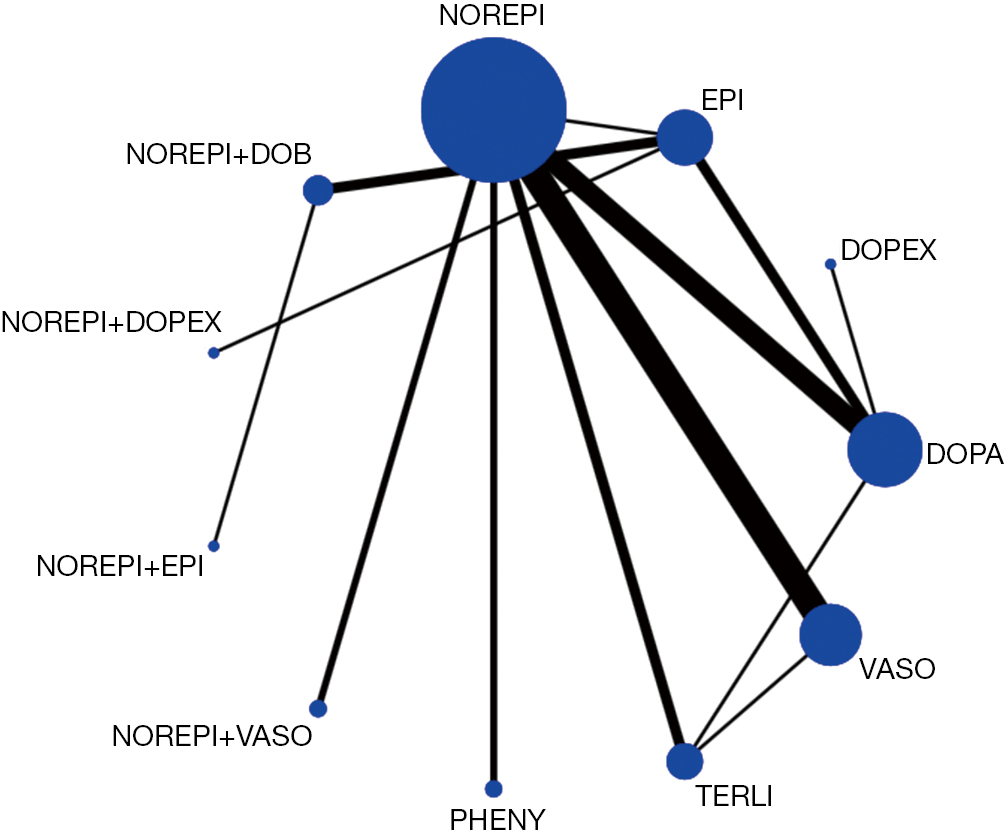 Figure 2 Network evidence of the comparisons for the different vasopressors regimens. 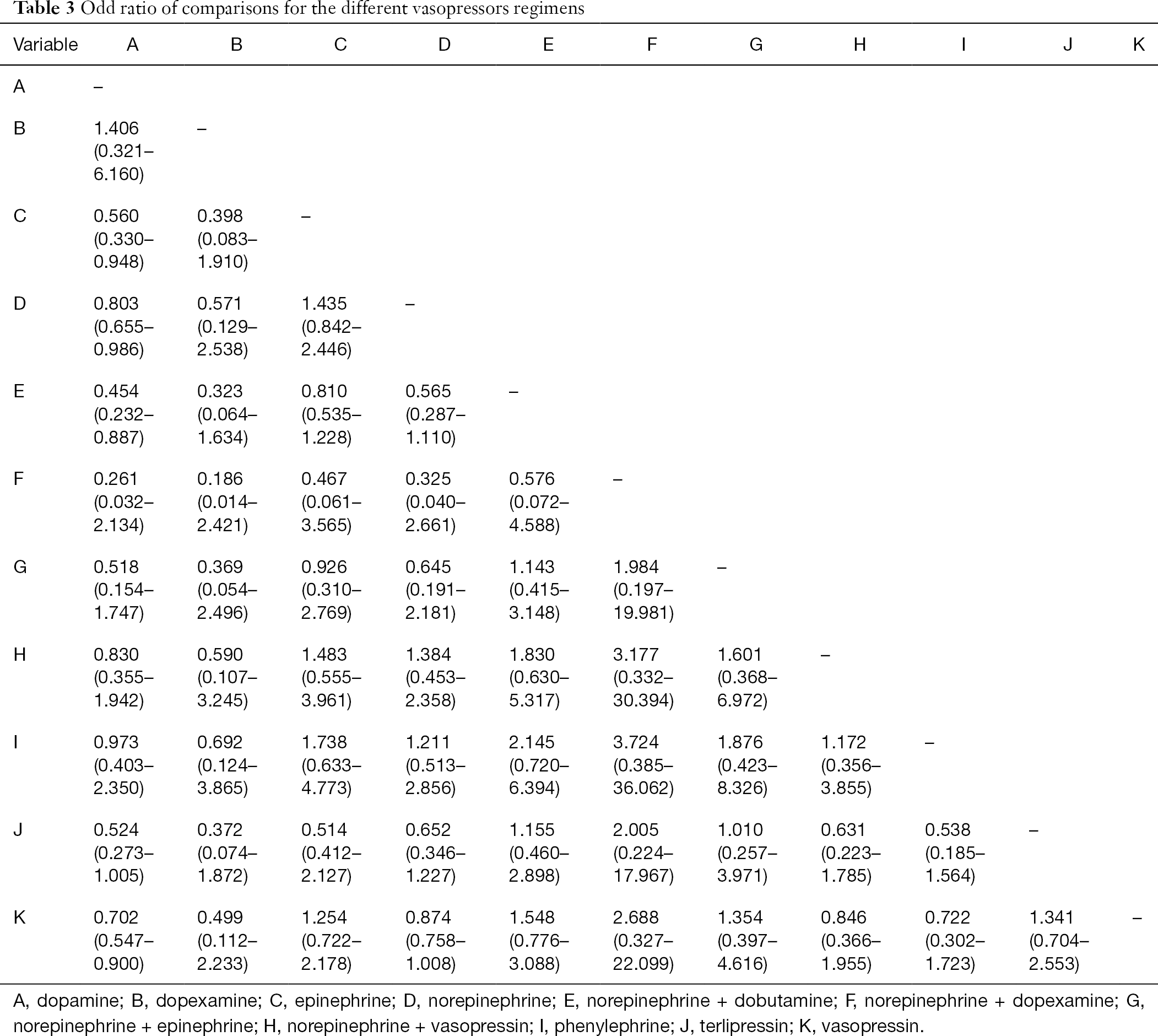 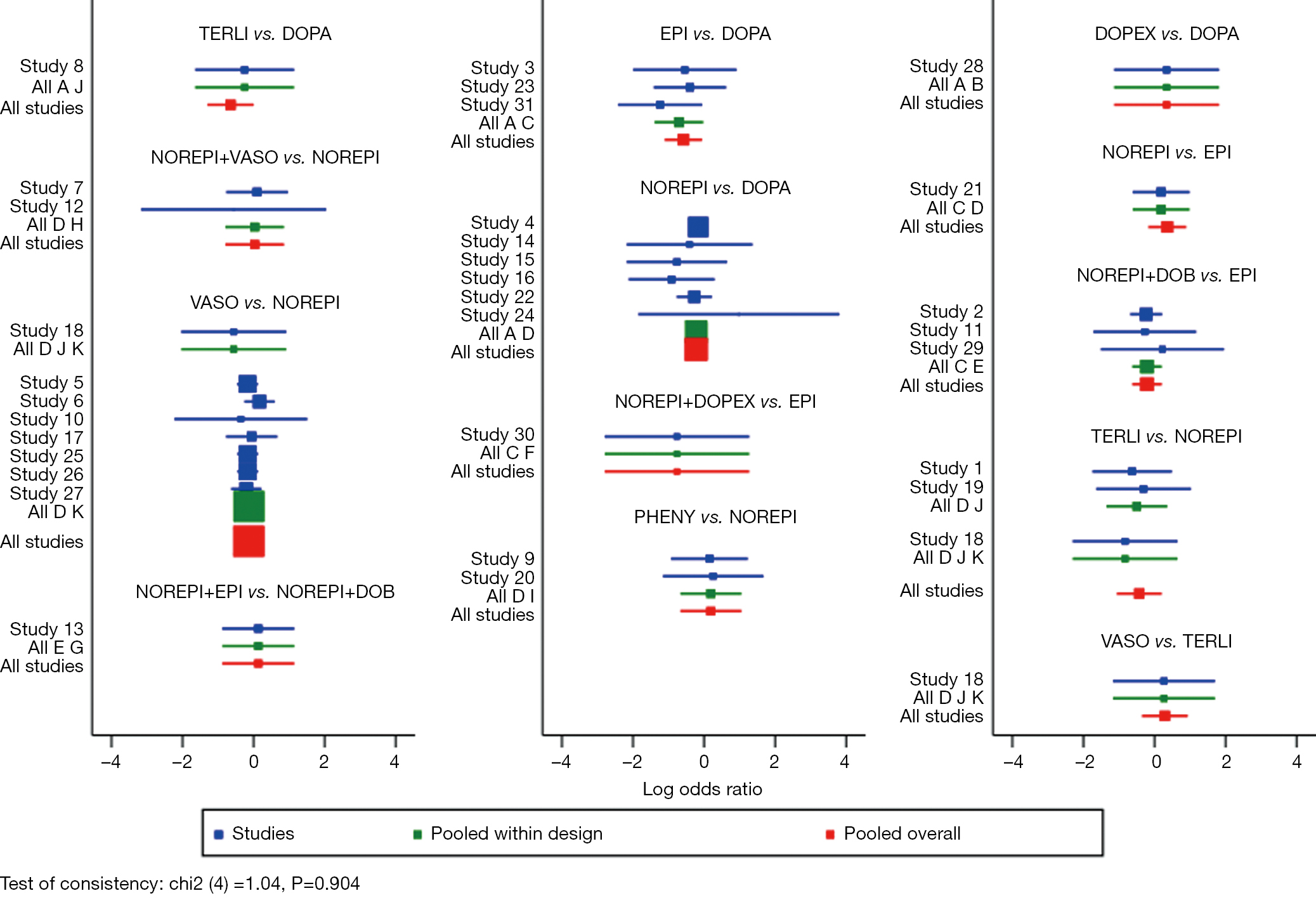 Figure 3 Forest plots of the comparisons for the different vasopressor regimens.

Potential publication bias of vasopressors used for treating patients with septic shock was performed and showed as funnel plot (Figure 4). 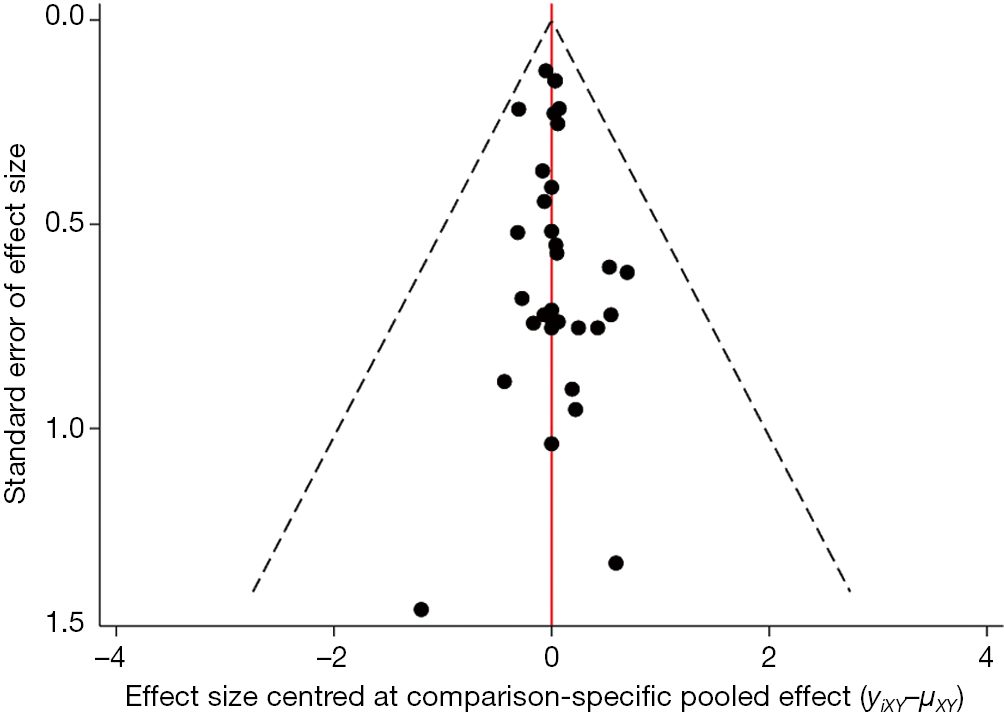 Supplementary data show the results of incidence of arrhythmia and increased heart rate in septic shock patients in the included studies of the network meta-analysis (Figures S1,S2, Tables S1-S5). 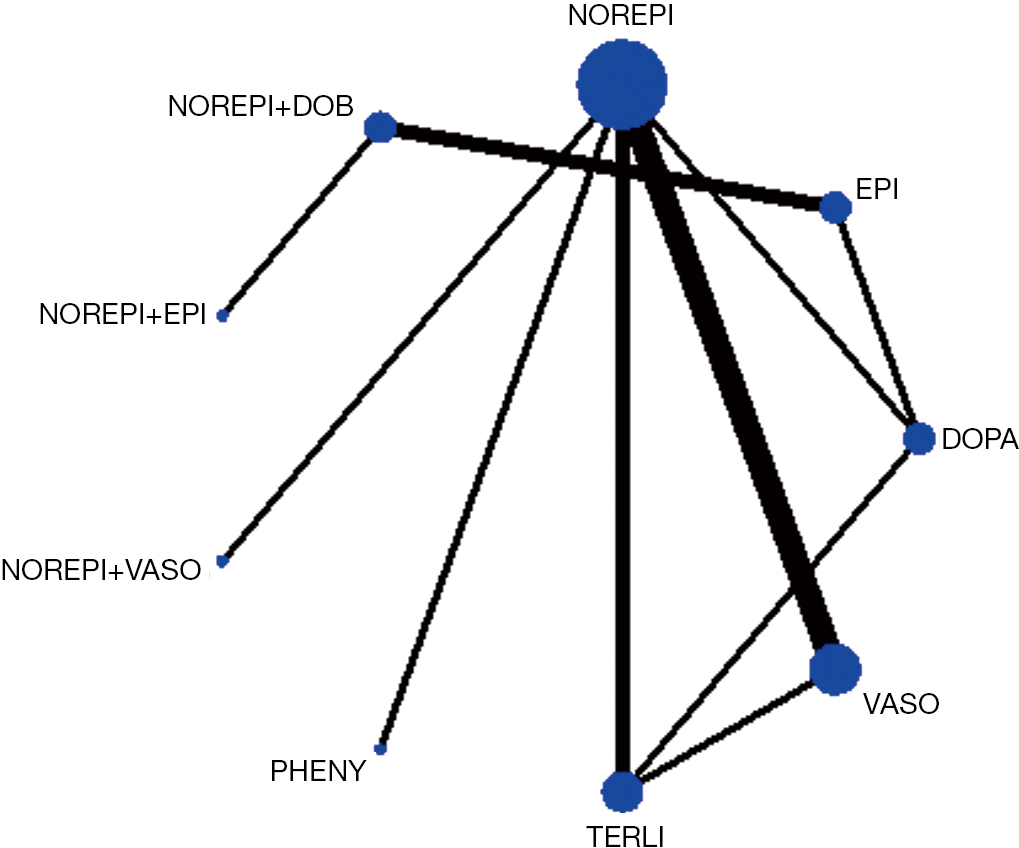 Figure S1 Network evidence of the comparisons for the different vasopressors regimens in arrhythmia. 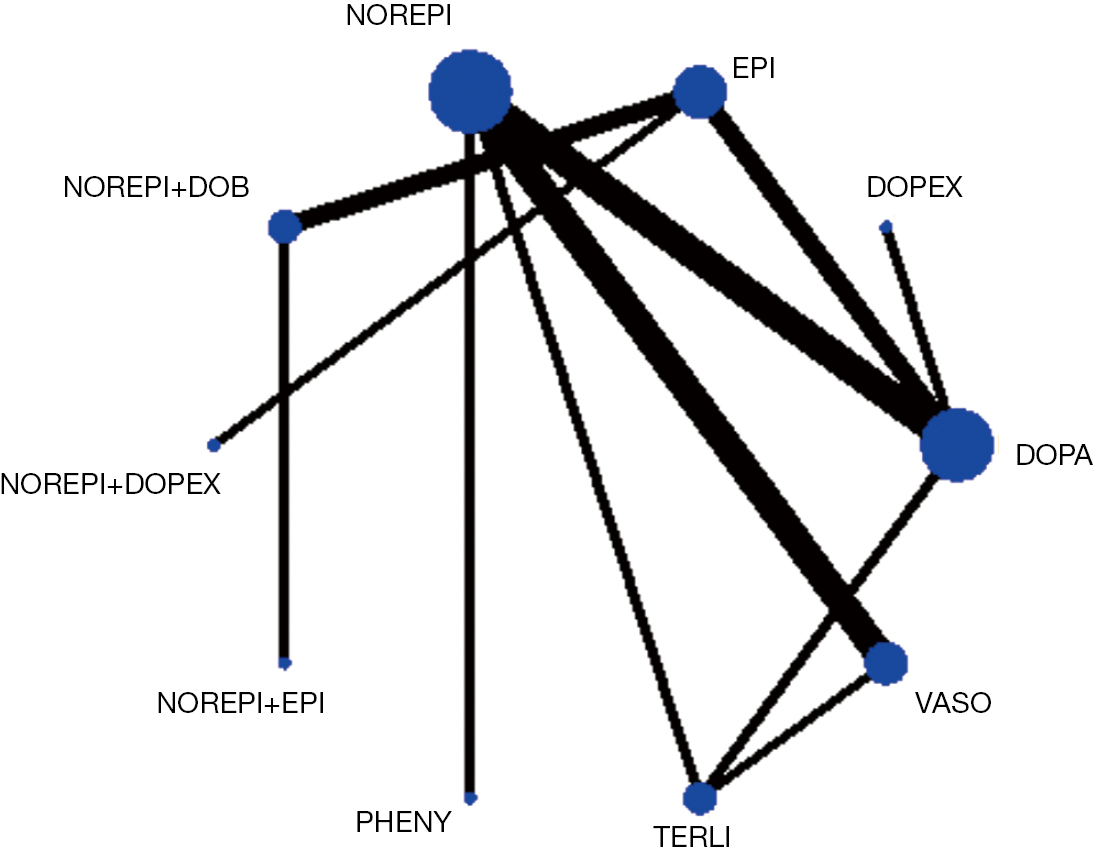 Figure S2 Network evidence of the comparisons for the different vasopressors regimens in heart rate. 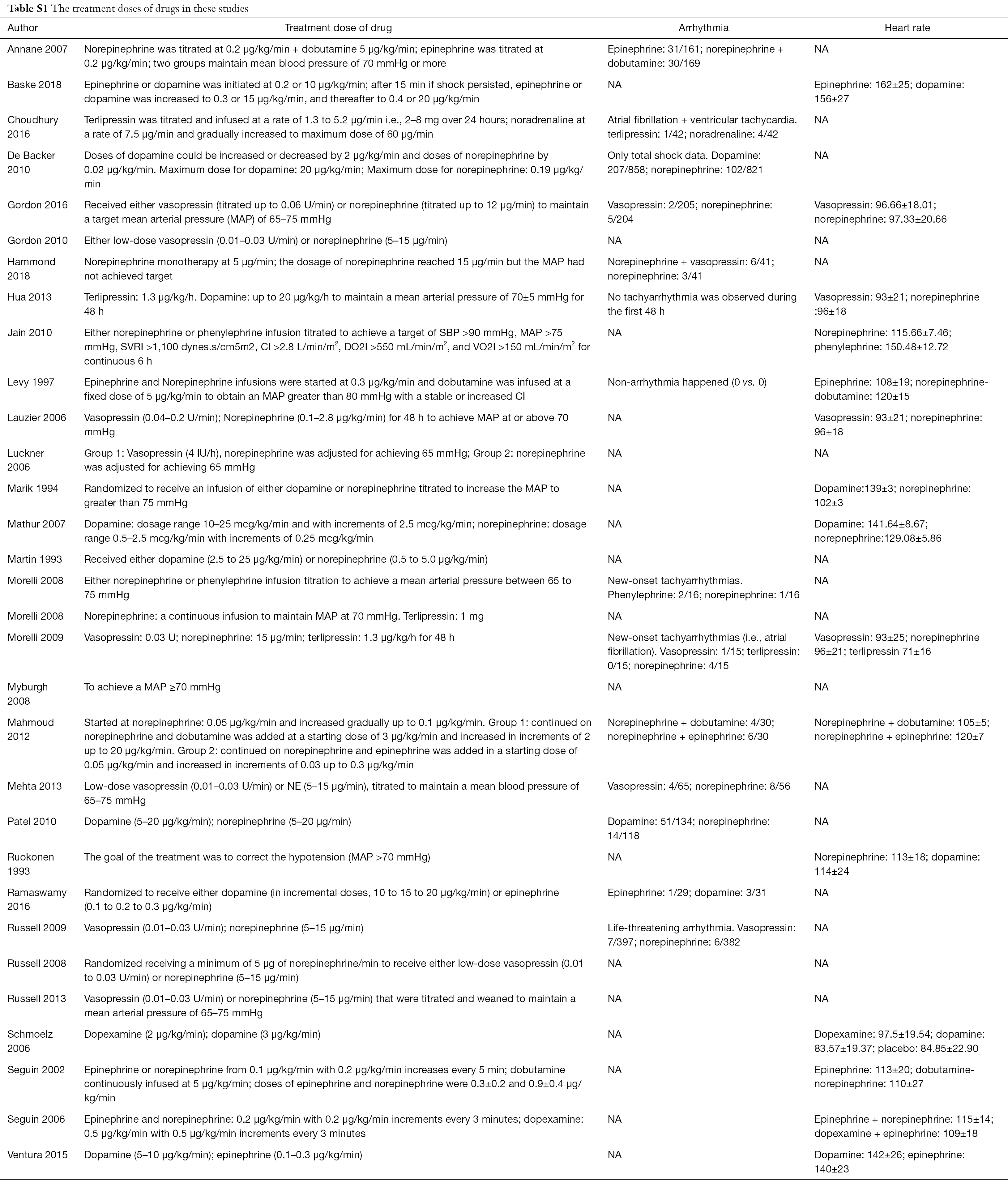 According to the results of our study, using combination vasoactive agent (vasopressors) is prior to only one agent. In addition, for the results of arrhythmia and increased heart rate, the combination regimens groups did not showed inferiority to other single regimen groups.

On the one hand, in pathophysiology, septic shock is a kind of distributive shock; the hypotension results from peripheral vasodilation and low systemic vascular resistance (59). Septic shock not only injures the vessel, making the body fluid flow from blood vessel to tissue, but also damages the cardiac function by secreting bacterial toxin (60,61).

On the other hand, single vasopressor regimens have many adverse events. For example, epinephrine induces higher heart rate, cardiac output, oxygen delivery, and more oxygen consumption than the combinations by stimulating the beta-1 adrenergic receptors (6); dopamine increases MAP mostly due to increment of stroke volume and heart rate; Norepinephrine also has limitations, as it increases MAP by means of the vasoconstrictive effects, with little improvement of cardiac function, changing heart rate and increasing strike volume less; In recent studies, low dose of vasopressin is probably effective in raising blood pressure in patients refractory to other vasopressors and may have other potential physiologic benefits.

In addition, combination regimens probably have synergistic effects on decreasing the dosage and adverse events of one agent.

Similarly, the meta-analysis conducted by Zhou et al. (10) also showed the priority to combination regimens. However, the guideline (62) only demonstrated that norepinepherine was more useful than dopamine, and ‘adding either vasopressin or epinephrine’ to norepinepherine was suggested. Nowadays, in clinical practice, combinations only appear when single vasopressor treatment could not appropriately control the MAP.

The limitations of our study were showed as followed: Firstly, the studies included were only published in English, so we might lose some excellent studies published in other languages. Secondly, although the result showed that the probably best combination was norepinephrine and dopexamine. This finding was based on a single study comparing this combination to epinephrine. Further, dopexamine is not available in many countries and has fallen out of favor. But according to our study, the results gave clinical practitioners the reference that the combination treatment could be better in downing 28-day mortality.

We acknowledge all the contributed authors.