Male breast cancer (MBC) represents an uncommon disease, with an estimated 2,550 men diagnosed in the United States (USA) in 2018, accounting for less than 1% of all new breast cancer patients (1). In recent years, the trends in incidence of female breast cancer (FBC) has risen due to the increased longevity, changes in lifestyle behaviors, the prevalence of mammography screening and improve healthcare awareness (2-4), and a growing proportion of breast carcinomas are detected early. Unlike FBC, men are not only lack of self-awareness of breast health examination, but also not included in the screening program. Thus, MBCs are tended to advanced stage.

Due to the rarity of MBC, large-scale randomized clinical trials for MBC are not feasible. Therapeutic strategies in men are, therefore, the generalized from the management of FBC patients. The optimal management strategy for MBC patients is still unknown. MBC patients have significantly different clinicopathological features and treatments when compared to that of FBC patients. For example, male patients had different hormone levels at baseline and were diagnosed at an older age and more advanced stage (5,6). Furthermore, MBC patients are more likely to undergo total mastectomy (5,7). To address the issues mentioned above, a study using the real-world data from national cancer-registry database would be informative and clinically relevant. The Surveillance, Epidemiology, and End Results (SEER) database is a national database that covered approximately 28% of the USA population. In this study, we aimed to use the SEER database to analyze the trends in incidence, clinicopathological characteristics, and survival outcomes of early MBC patients and compared them with the propensity score-matched early FBC population.

Clinicopathological factors including age at diagnosis, year of diagnosis, race, marital status, histology, grade, American Joint Committee on Cancer (AJCC) stage, tumor size, LN status, ER status, PR status, human epidermal growth factor receptor 2 (Her2) status, molecular subtype, surgery, chemotherapy and radiation were retrieved from the SEER database. Hormone receptor (HR) positivity was defined as ER and/or PR positivity. Her2 status and subtype were not available in the SEER database until 2010. Because the HR-negative/Her2-positive subtype of MBC was uncommon (8), breast cancer molecular subtypes were classified as HR-positive/Her2-negative (ER/PR+ and Her2−), Her2-positive (Her2+, regardless of ER/PR status) and triple-negative (ER−, PR− and Her2−). This is a study using de-identified, public available dataset, and ethical approval can be waived based on our institutional policy.

The incidence rates per year of stage I–II breast cancer in the male and female cohorts are calculated by SEER*Stat (Version 8.3.5). Trends in the incidence of early MBC and FBC were calculated per 100,000 individuals and were age-adjusted to the USA standard population in the year 2000. The joinpoint regression model is useful for distinguishing and describing the occurrence of changes in different periods throughout trends in data (9). This regression model of cancer incidence rates was used to assess the annual percentage change (APC) in breast cancer. The model allows up to 2 joinpoints for rates from 2000 to 2015, with 3 maximum segments (10). The incidence rate analyses were performed the Joinpoint statistical software (Version 4.7.0.0) from the Surveillance Research Program of the USA National Cancer Institute.

Eligible patients were considered as the original cohort, which is used to analyze the baseline clinicopathological features and survival of MBC and FBC in a real-world scenario. To reduce bias, we developed a 1:4 (MBC:FBC) matched cohort using PSM analysis. All statistical tests were two-sided, P values of 0.05 or less were considered significant. Statistical analysis was performed using SPSS software, version 23 (IBM Corporation, Armonk, NY, USA). 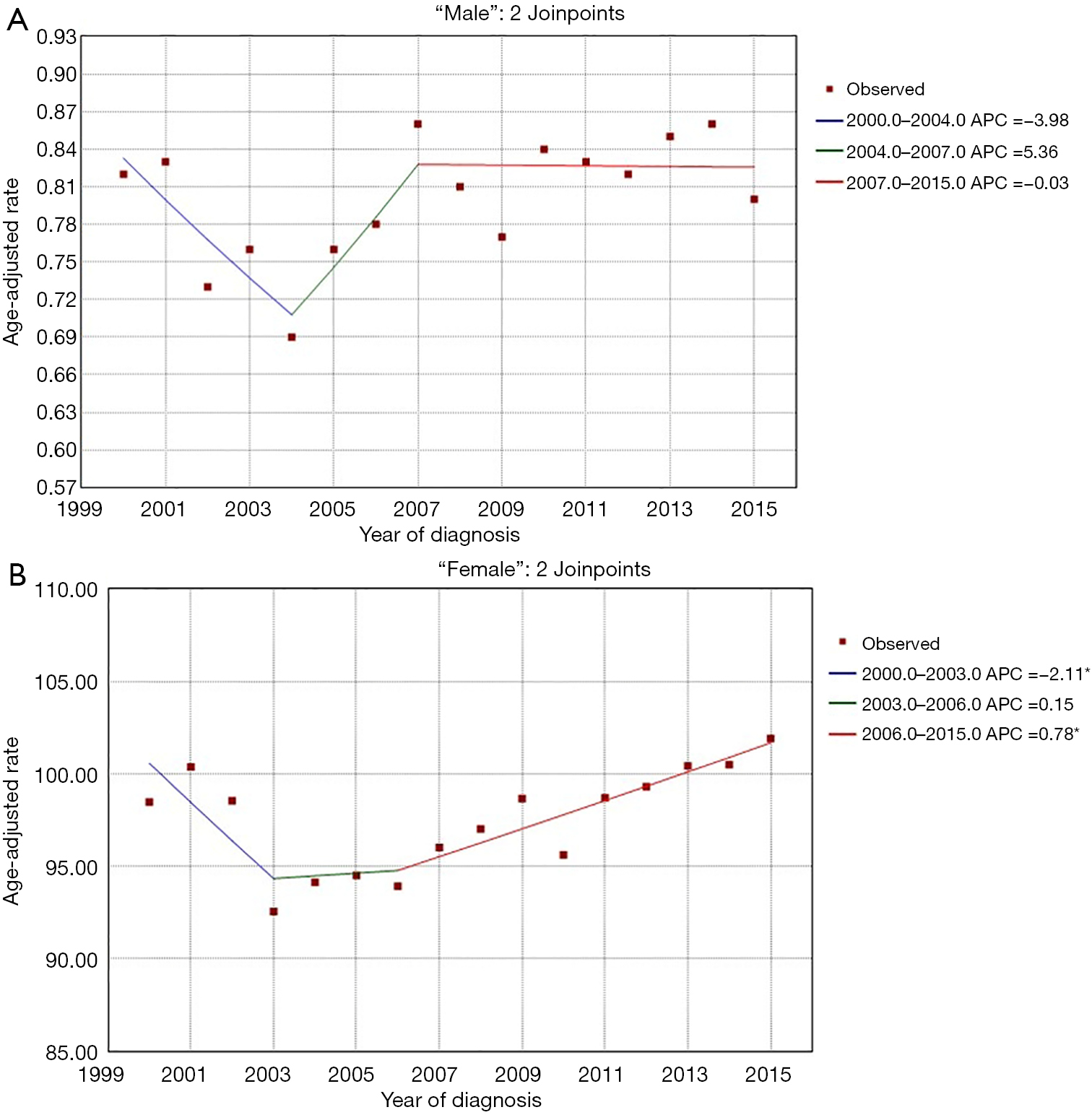 Figure 1 Trends in the age-adjusted incidence rates of early male breast cancer (MBC) (A) and female breast cancer (FBC) (B) by joinpoint regression (2000–2015). *, indicates that the annual percent change (APC) is significantly different from zero at the alpha=0.05 level. Final Selected Model: 0 Joinpoint.

Clinical characteristics and survival outcomes of the original cohort 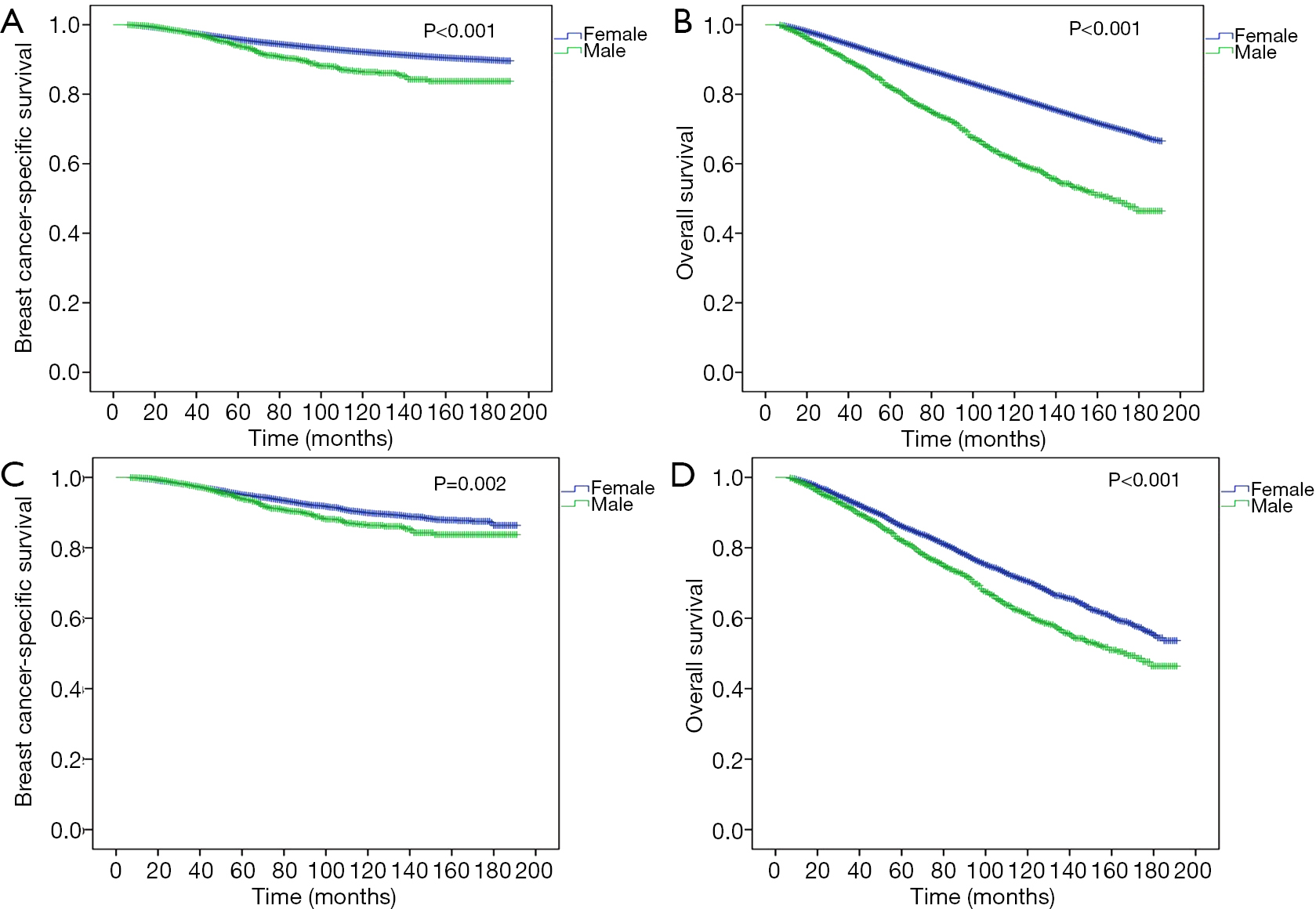 Survival outcomes in the matched cohort

After PSM, 2,254 male and 9,016 female patients were completely matched. None of the variables were significantly different between the two groups (Table 1). In the matched cohort, early MBC had significantly worse BCSS (P=0.002, Figure 2C) and OS (P<0.001, Figure 2D) than female counterparts. 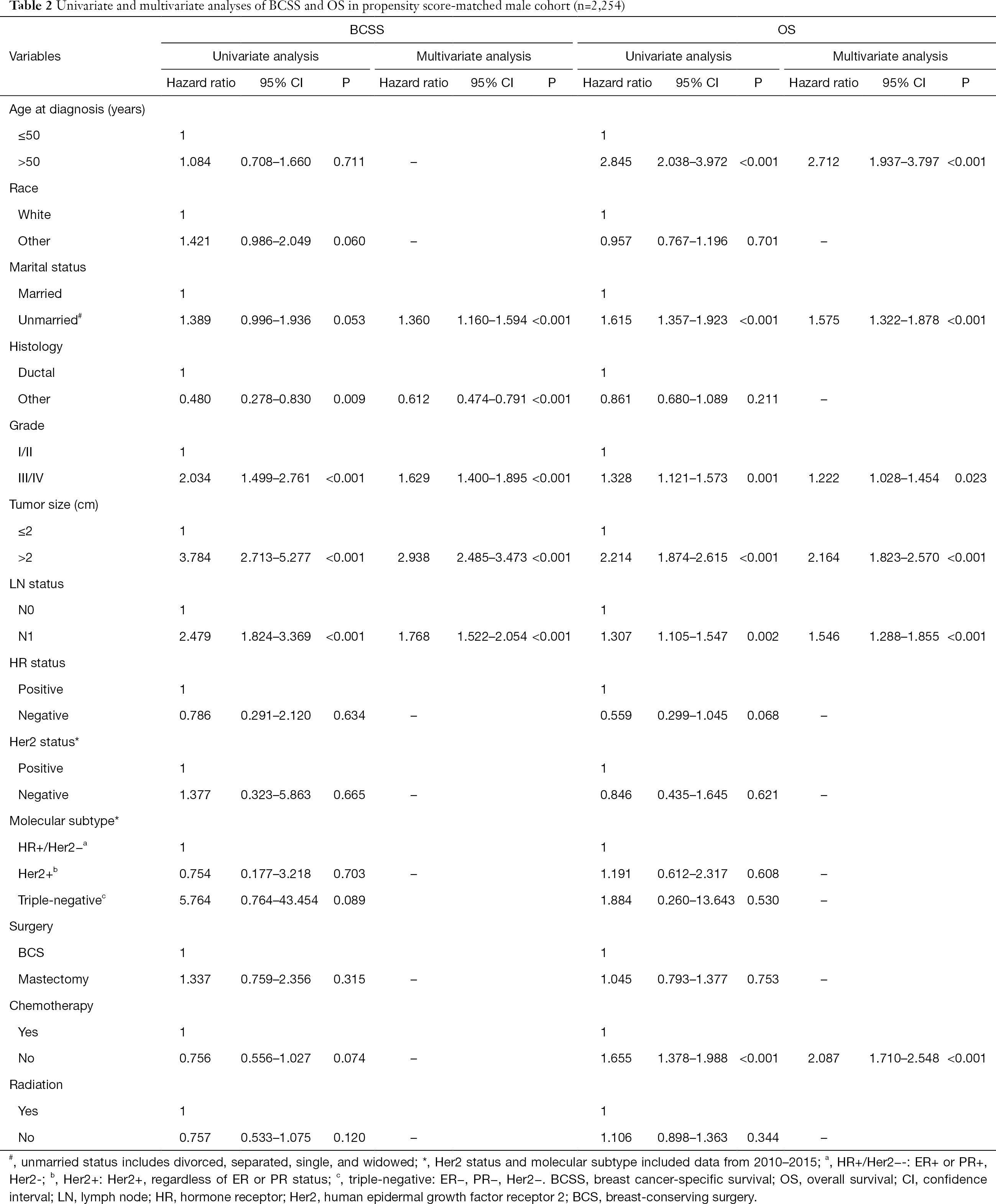 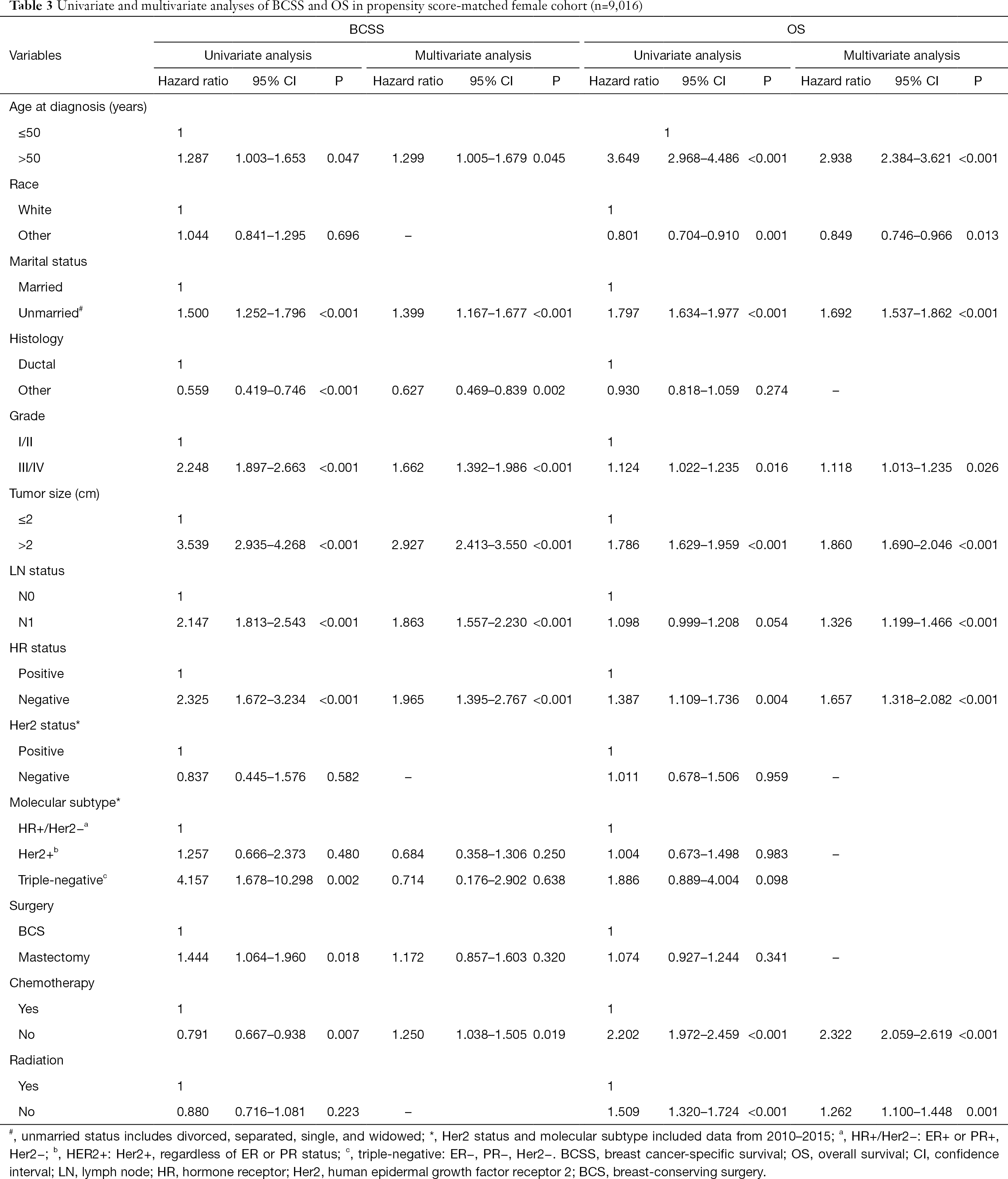 In the stratified analyses, MBC vs. FBC was still significantly associated with worse BCSS and OS in patients with stage I and II diseases (Figure 3). The differences were more significant in stage II than in stage I patients. Interestingly, when stratified by HR status, MBC vs. FBC was associated with worse BCSS (P<0.001, Figure 4A) and OS (P<0.001, Figure 4B) only in HR-positive subgroups, but not in HR-negative subgroups (Figure 4C,D). 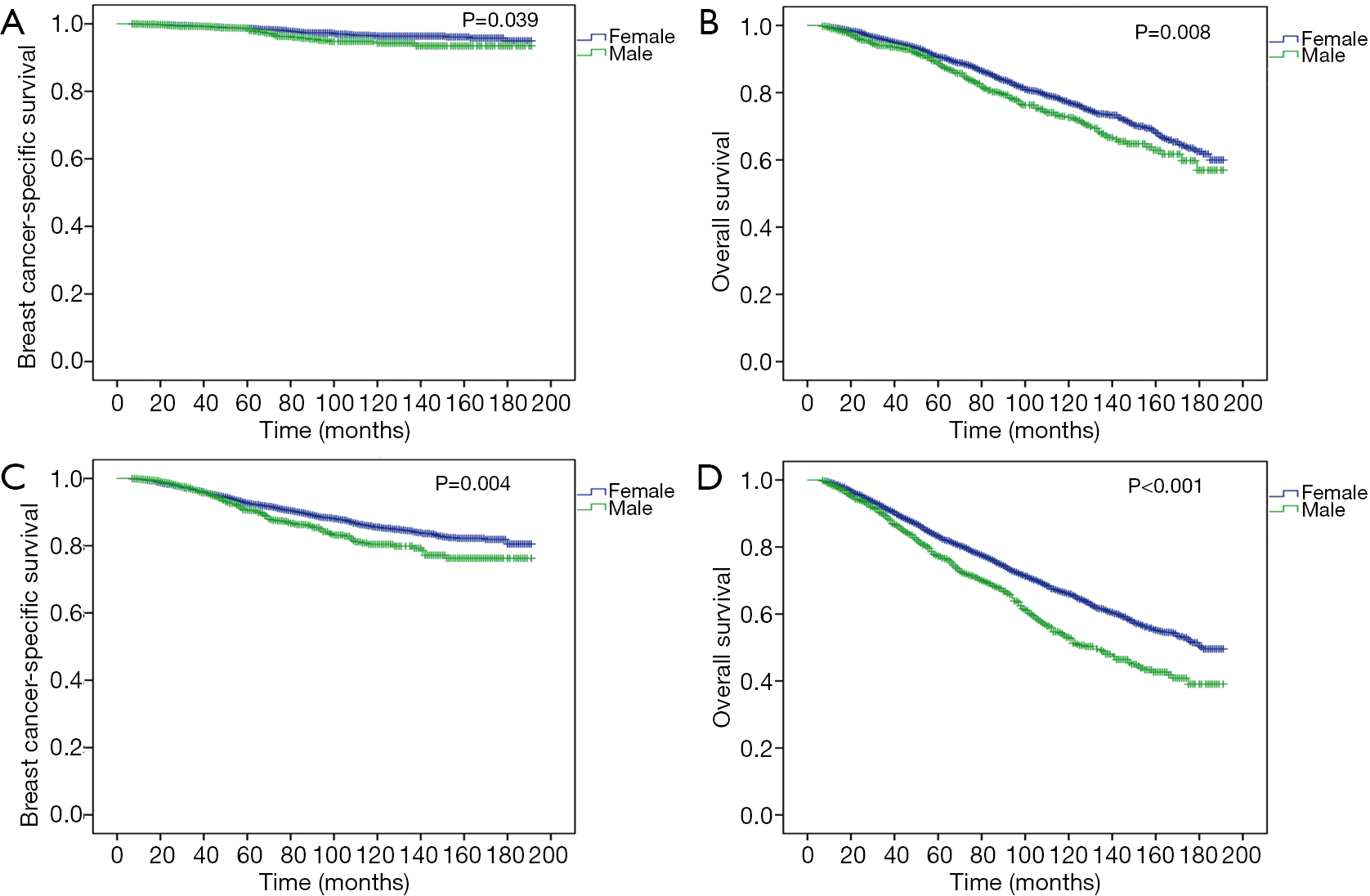 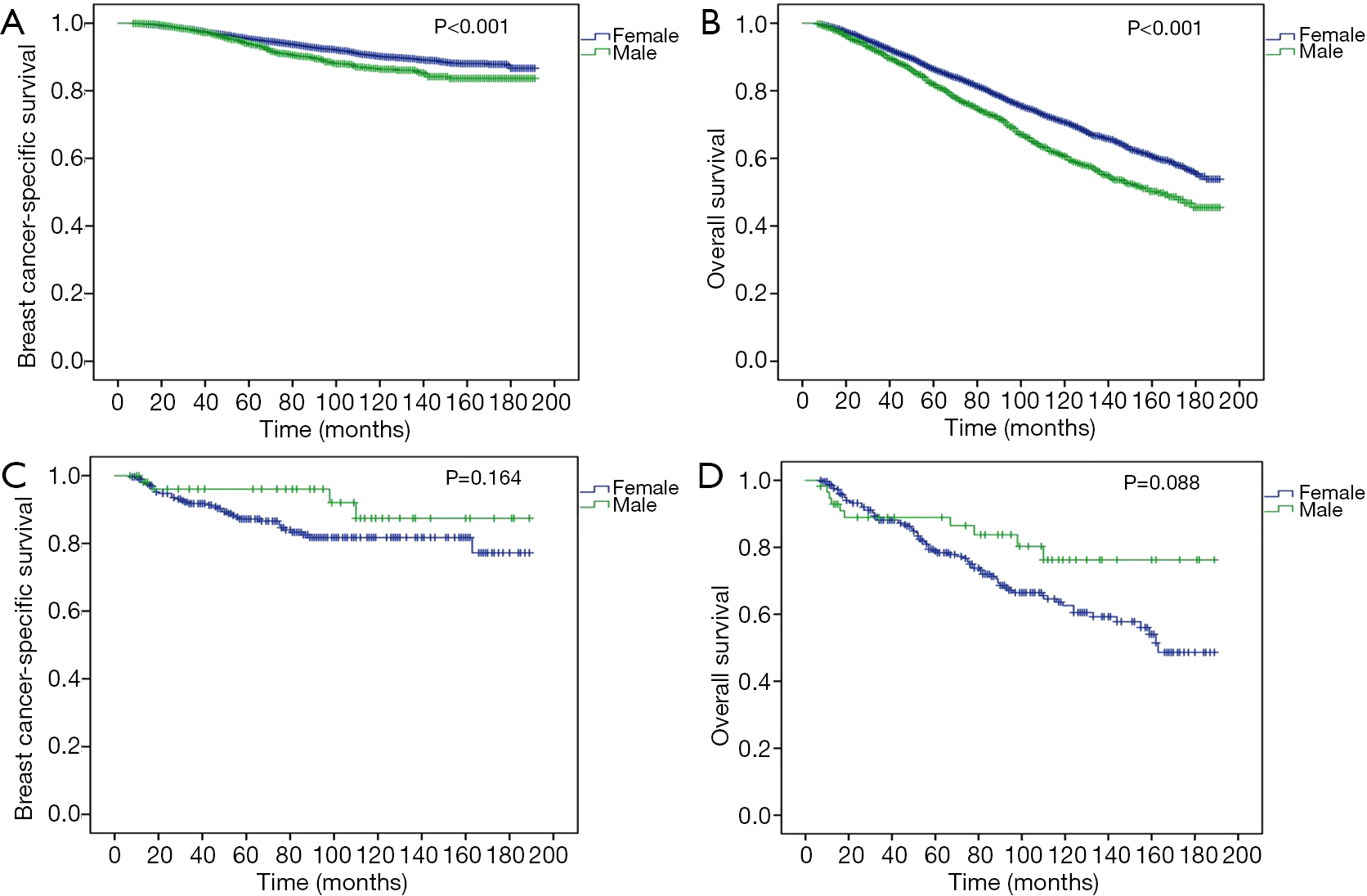 This large population-based study is the first to describe the trends in incidence of early MBC from 2000 through 2015. There are several differences in biological behaviors and clinicopathological features between male and female patients. We observed that early MBC had worse survival outcomes than propensity score-matched FBC.

In recent decades, we observed that early MBC incidence trends were stable. However, the incidence rates of early FBC changed significantly. The drastic drop between 2002 and 2003 seems to be temporally linked to the sharp decline in the use of postmenopausal hormone therapy (PHT) following the results of the Women’s Health Initiative findings in 2002 on the adverse effects of combined PHT use, including increased risk of breast cancer (11). This phenomenon occurred in many countries worldwide with similar drops in PHT prescription and a concomitant decrease in breast cancer incidence (12,13). There are other explanations for the decline in the incidence of FBC, such as a decrease in mammography screening (14,15) and improvement lifestyle (16). However, these factors had only a modest effect on the incidence of breast cancer.

Additionally, in both MBC and FBC, the unmarried patients in our study had worse BCSS and OS compared with married patients. Many studies reported that marital status had impacted cancer outcomes (17,18). Previous reports illustrated that unmarried status was a significant predictor of the refusal of definitive treatment, early discontinuation of treatment, and non-adherence to adjuvant therapy in breast cancer patients (19,20). There are some possible explanations for this finding. First, unmarried patients may lack cancer screening. As is known, early screening could lead to early cancer detection and effective treatment. Breast cancer screening is a well-known generally effective strategy to reduce breast-cancer related death and improve the quality of life. Hanske et al. (21) demonstrated that divorced/widowed/separated and never-married patients had a lower rate of breast cancer screening than the married group (74% vs. 81%). As a result, unmarried patients may have more advanced tumor and worse prognosis. Second, unmarried patients may have fewer economic resources and social support than married patients. Spouses may encourage patients to seek medical attention for worrisome symptoms, to receive curative therapies, and to comply with prescribed treatments, all of which may result in better prognosis (22,23). Interestingly, a study showed that male patients benefited more from marriage than did female patients. The reason for this may be considered that unmarried women receive greater social support from their relatives or friends than unmarried men (24). Third, unmarried patients may lack psychosocial support and may have more psychological stress. Accumulating evidence suggested that negative emotions may contribute to cancer progression and mortality (25,26). Taken together, these findings suggested that the impact that marriage, social, and psychological support could affect survival in breast cancer patients.

Previous reports suggested that MBC patients were presented with older age at diagnosis, more aggressive tumor biology, and more comorbidities, and therefore poorer survival compared with FBC patients (5,27,28). In our study, we used the national cancer-registry database and confirmed the previous findings that MBC patients had worse survival outcomes in a real-world scenario. Since the sample size of MBC patients was significantly different from that of the FBC patients, we developed a 1:4 (MBC:FBC) propensity score-matched cohort, in which we still observed that MBC was associated with worse clinical outcomes. Several underlying reasons should be considered. First, MBC has more aggressive biological behavior than FBC. A study evaluating the 21-gene recurrence score in MBC and FBC illustrated that high recurrence score ≥31 was more common in male patients (12.4% vs. 7.4%) (6), suggesting that MBC tended to have a higher risk of tumor relapse. Second, the optimal strategies for MBC remain unclear and are extrapolated from knowledge about female counterparts. Due to majority of MBC were HR-positive tumor, endocrine therapy plays an important role in MBC. However, male patients’ compliance is not as adequate as FBC patients. Previous studies found that MBC patients had lower adherence rates to receive adjuvant endocrine therapy because they were less likely to accept side effects than females, such as decreased libido, sleep disorder and thromboembolic events (29-31). As a result, lower compliance may lead to the poorer prognosis. Third, the mechanism of ER in MBC may be different from that in FBC. This is further supported by our findings that HR status was not prognostic in MBC patients, which was different from that of the FBC population. These results were consistent with findings from a study from Turkey (32). On the other hand, since the serum estrogen level of male adults is close to that of the postmenopausal women (33), the use of AI might have improved the clinical outcomes in ER-positive MBC patients. However, studies showed that AIs led to inferior survival compared to tamoxifen alone (34,35). A study by Pagani et al. speculated that the inferiority of AIs versus tamoxifen in men might be associated with gonadal physiology, and suggested that men should be used gonadal suppression when to use AIs (36). Therefore, further studies on the mechanism of endocrine therapy in MBC patients are essential. We should be cautious about using the management strategy from FBC in MBC patients and suggest that HR-positive MBCs should receive more aggressive treatments and more intensive surveillance plans comparison with FBC patients.

There are some limitations to our study. First, the SEER database does not provide information about comorbidities, which may affect the survival outcomes of male and female patients. Second, some therapy-associated data that greatly affect the prognosis of breast cancer, such as endocrine therapy and targeted therapy, are not available in the SEER database. Third, we do not have information regarding the family history of breast cancer and BRCA mutation data. BRCA germline mutations are strongly associated with breast cancer development, especially for MBC (37). Recently several studies demonstrated that other genetic mutations, such as CHEK2 and PALB2, were associated with increased risk of MBC (38), but data on these pathogenic variants are missing in SEER. Lastly, local recurrence is not recorded in the database, and only mortality data are available, which is limited to survival outcomes. However, despite these limitations, this is a large population-based cohort with long-term follow-up in male and female patients with stage I–II breast cancer. Similar to other studies using data from the SEER database, the cancer registry did not contain all of the relevant information, which may have led to an imbalance between male and female cohorts. We used the PSM analysis to attenuate the confounding variables to obtain reliable prognosis data.

In conclusion, the incidence trends for early MBC were stable, whereas the trends changed significantly for early FBC from 2000 to 2015. Early MBC had worse survival outcomes when compared with female counterparts. In the future, more basic, biological studies are needed to investigate the driven pathways that account for the aggressive behaviors and inferior clinical outcomes of MBC. Clinical trials might be necessary to confirm the validity of using strategies from FBC in MBC patients, and individualized treatment approaches should be developed.