Survival and analysis of prognostic factors for hepatoblastoma: based on SEER database

Hepatoblastoma (HB) is the most common primary liver cancer in children with rapid growth in recent years (1-3). Patients with HB are usually present at 0–4 years and rare to see at >15 years (4). At present, the pathogenesis of HB is unclear, which may be related to very low body weight, tobacco intake, and some inherited syndromes like Beckwith-Wiedemann syndrome (5).

Complete tumor resection is the cornerstone of treatment for HB, which offers the only chance for long-term survival. However, most of them were presented with an extensive unifocal or multifocal primary tumor or distant metastases at diagnosis, and lost the chance to surgery, leading to a very low 5-year survival rate (20–30%) (6,7). In the past four decades, great changes have taken place in the treatment of HB. In the 1980s, cisplatin (PLA) and doxorubicin (DO) were introduced to treat HB and improved prognosis. After then, several groups made their efforts to establish the core of the treatment for HB: chemotherapy plus complete resection of the tumor. The International Childhood Liver Tumor Strategy Group (SIOPEL) designed pretreatment extent of disease (PRETEXT) radiographically stage and risk stratification to conduct clinical treatment for HB. Meantime, Children’s Oncology Group (COG) also based on surgical findings to establish the stage for progress. Relying on these stages, it can help stratify the disease and facilitate the search for appropriate treatments. According to SIOPEL, the 5-year overall survival (OS) rate for HB can reach 75%.

Although survival rates have improved dramatically, there are many problems to be solved. The effects of many pathological factors on survival are not well understood, such as age, tumor size, multiple tumors, macrovascular invasion, and distant metastases. Moreover, small samples do not adequately account for their true survival. The goal of this study is to assess the newest survival of HB and the risk factors which impacted on survival by using the Surveillance, Epidemiology and End Results (SEER) database, also calculate the incidence of HB in recent years.

The SEER database provides clinical information on many tumors in an effort to reduce the cancer burden (8-12). We chose SEER 21 Regs Limited-Field Research Data + Hurricane Katrina Impacted Louisiana Cases, Nov 2018 Sub (2000–2016) to calculate age-adjusted incidence, which was largest geographic coverage available—approximately 36.7% of the US population (based on 2010 census). SEER*Stat software (version 8.3.5; National Cancer Institute, Bethesda, MD, USA) was used to analyze incidence rates and trends from 2004 to 2016. All incidence data were age-adjusted and normalized to the 2000 US Standard Population. The annual percentage change (APC) was calculated using the weighted least squares method (https://seer.cancer.gov/).

To investigate the survival of HB and the risk factors, we chose SEER 18 Regs Research Data + Hurricane Katrina Impacted Louisiana Cases, Nov 2018 Sub (1975–2016), because this database contained the most risk factors. SEER database contains high-quality follow-up and related clinical information. For accurate enough survival information, this research extracted patient data from 2004 to 2011, and the follow-up time was more than 5 years.

According to the International Classification of Diseases for Oncology, third edition (ICD-O-3), the code of HB was 8970. The age range is under the age of 19 years. The information of sex, race (whites, blacks, others), the size of the tumor, macrovascular involvement, multifocal tumor, distant metastasis, the way of treatment, and the survival were collected. The methods of treatment were classified as no-surgery, resection, and liver transplantation (LT). We excluded cases that no information provided in the extent of the disease and the way of treatment.

Statistical analysis was carried out by using IBM SPSS Statistics 25.0 (IBM Corp., Armonk, NY, USA). The survival rate of HB was calculated by using the Kaplan-Meier method, and the survival curve was drawn. The log-rank test was used to formally test the differences. Cox’s regression method was used for the multifactor analysis. Significant standard is P<0.05.

The age-adjusted incidence of HB 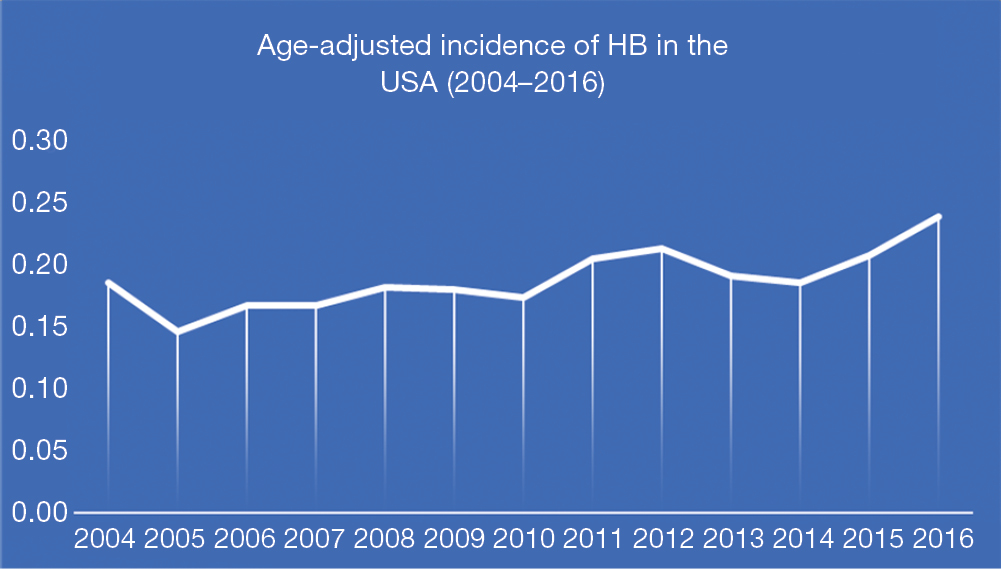 According to the selection criteria, a total of 302 cases were included in this study. Male patients accounted for 65.6%, more than women. Most patients were under the age of 2 years, and over the age of 2 years accounted for only 36.1%. The most common race is white, accounting for 79.5%. Resection is still the most common treatment method, accounting for about 66.9%. The detailed information is shown in Table 1.

Survival and univariate analysis for all patients 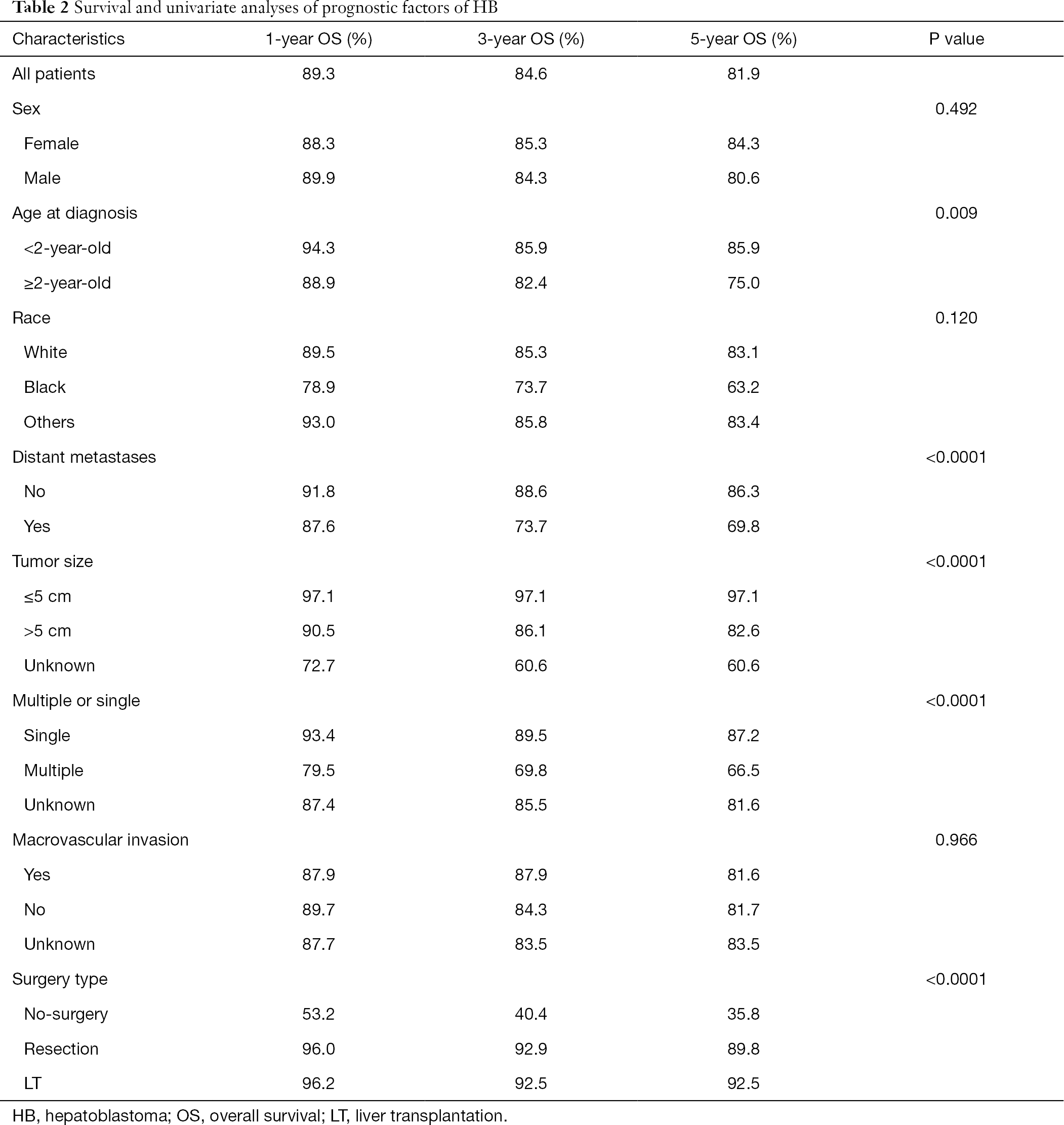 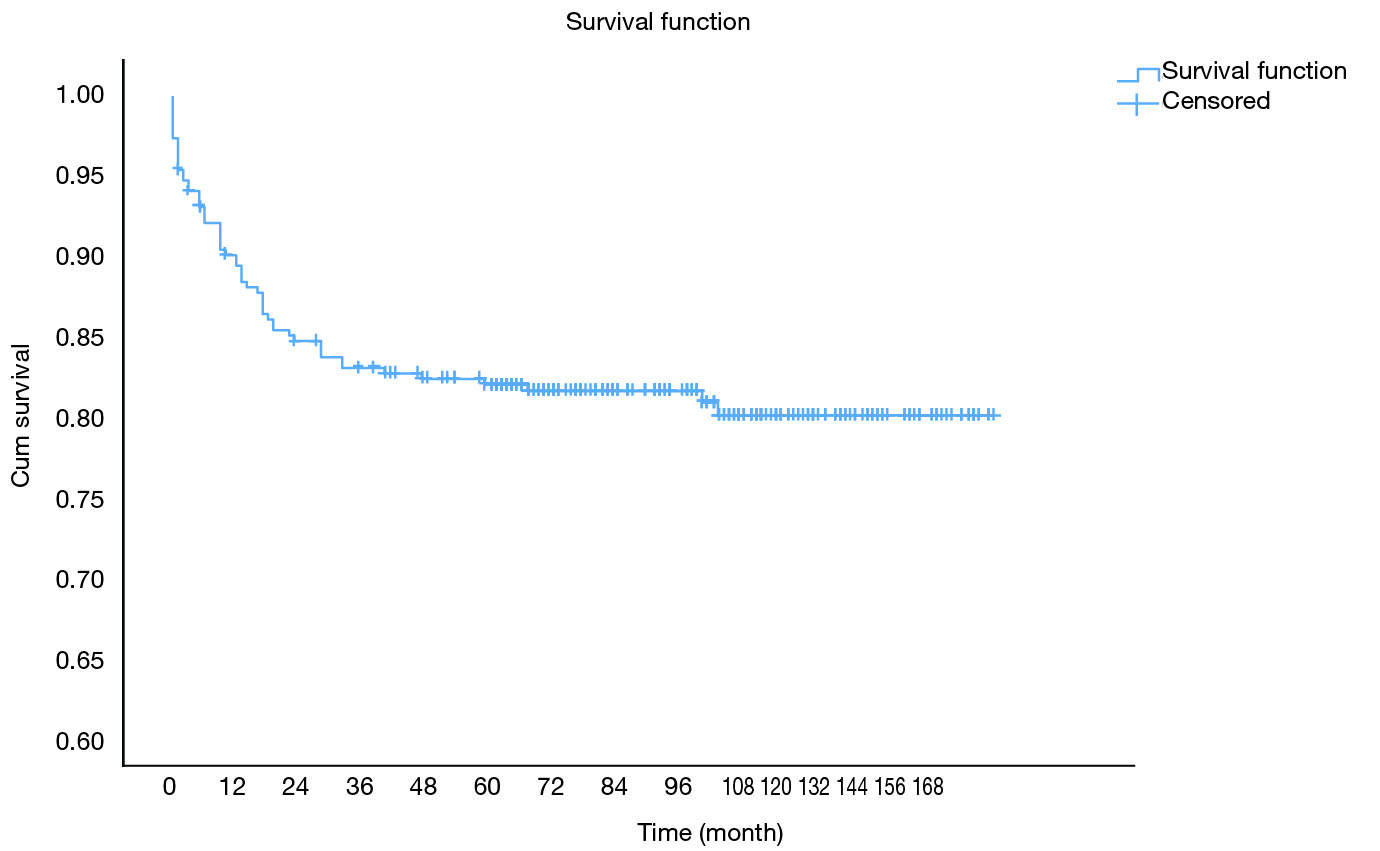 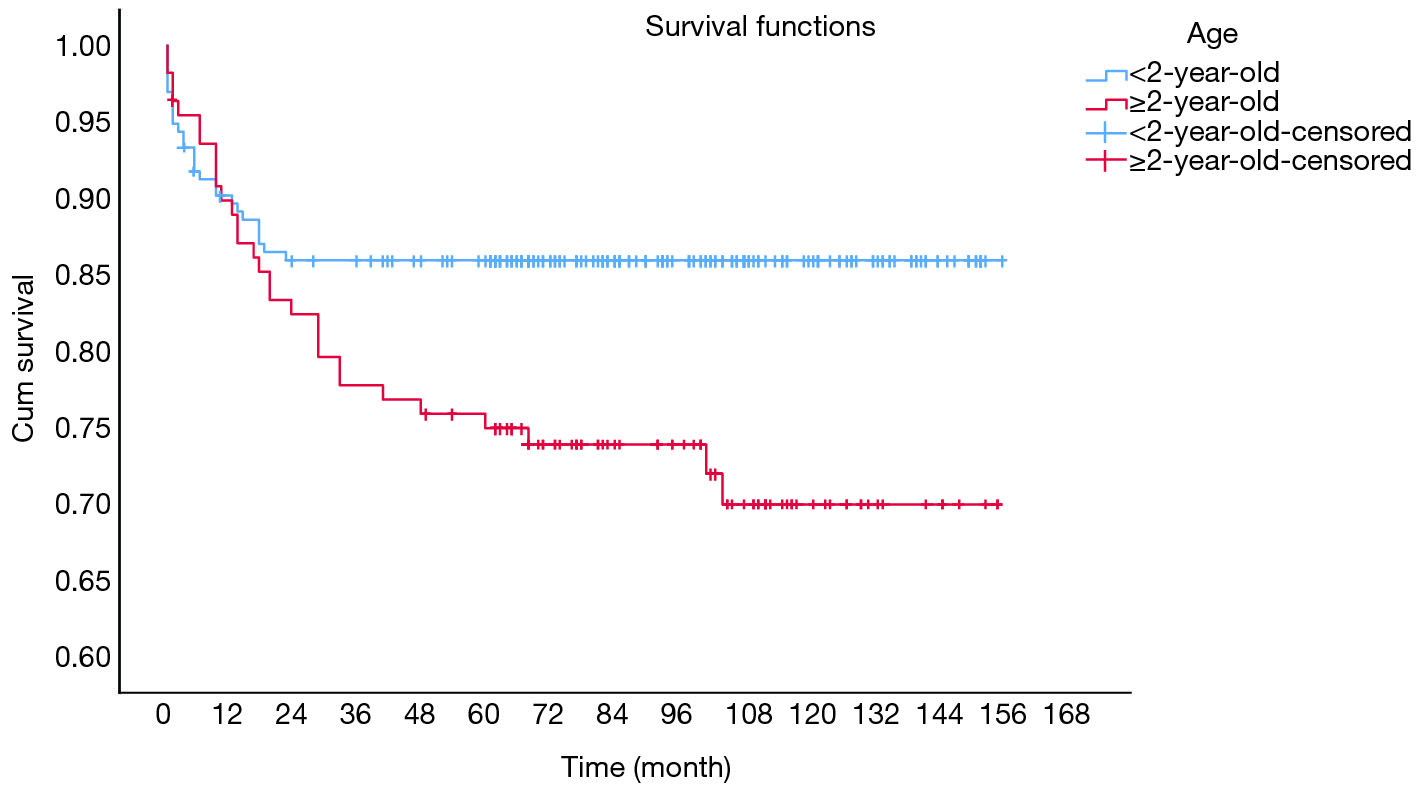 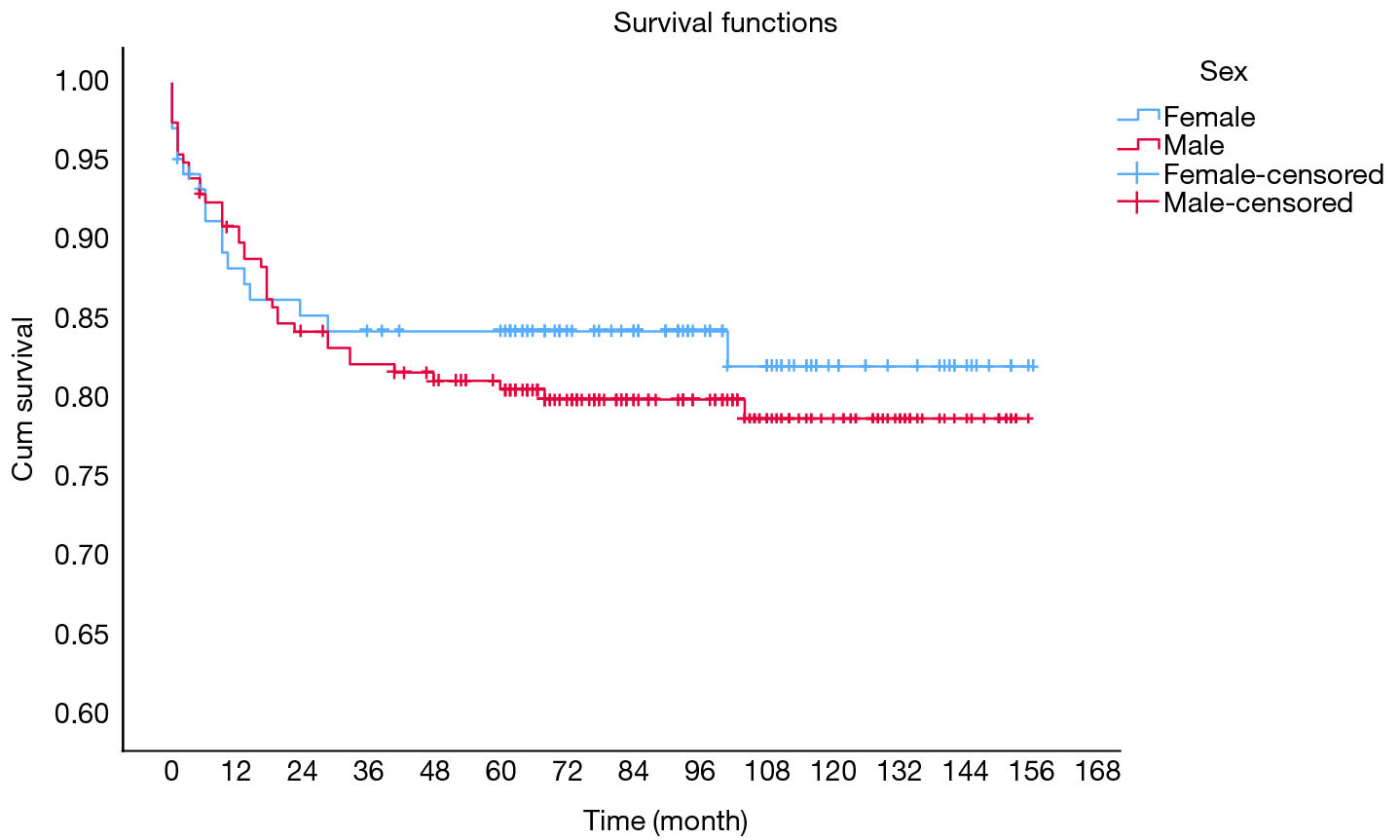 Figure 4 Survival curves for HB which were stratified according to sex. Female vs. male, P=0.492. HB, hepatoblastoma. 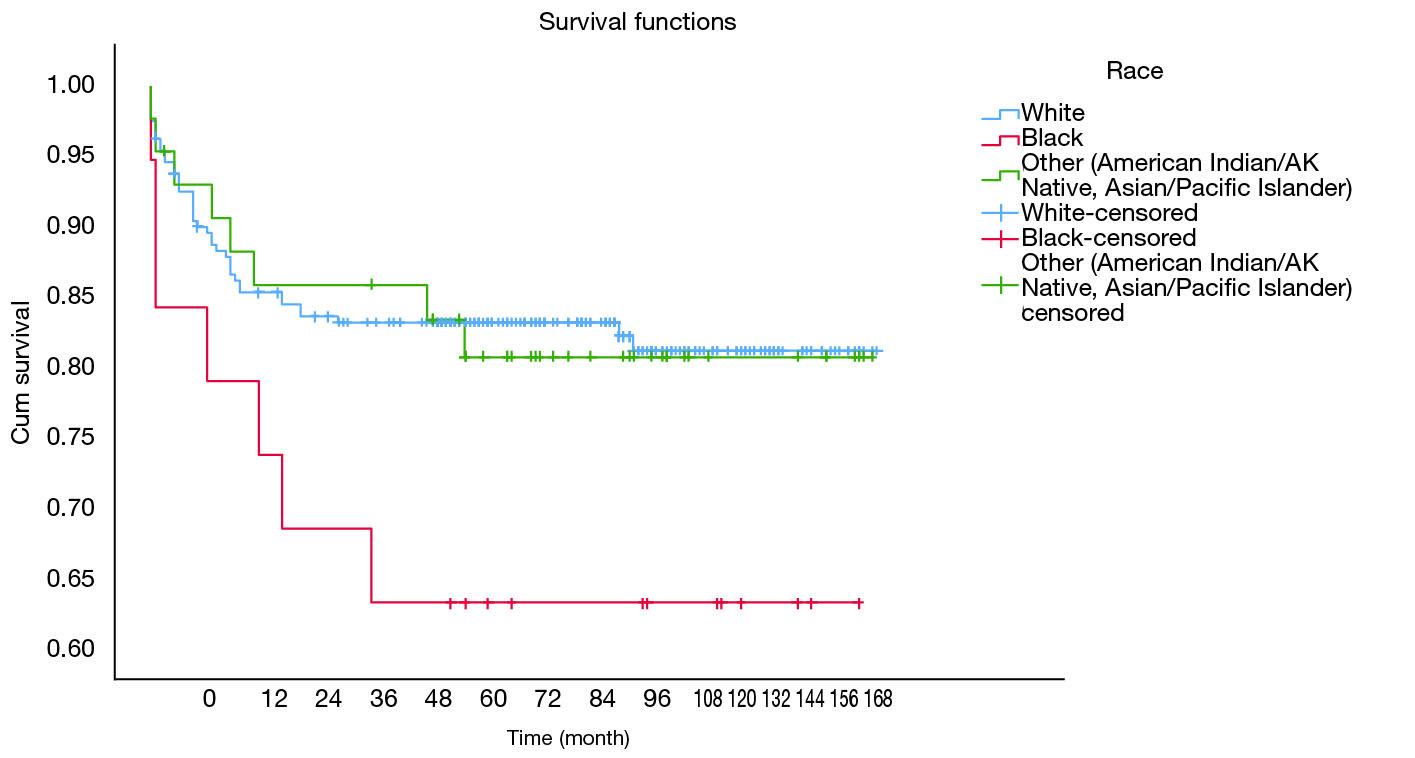 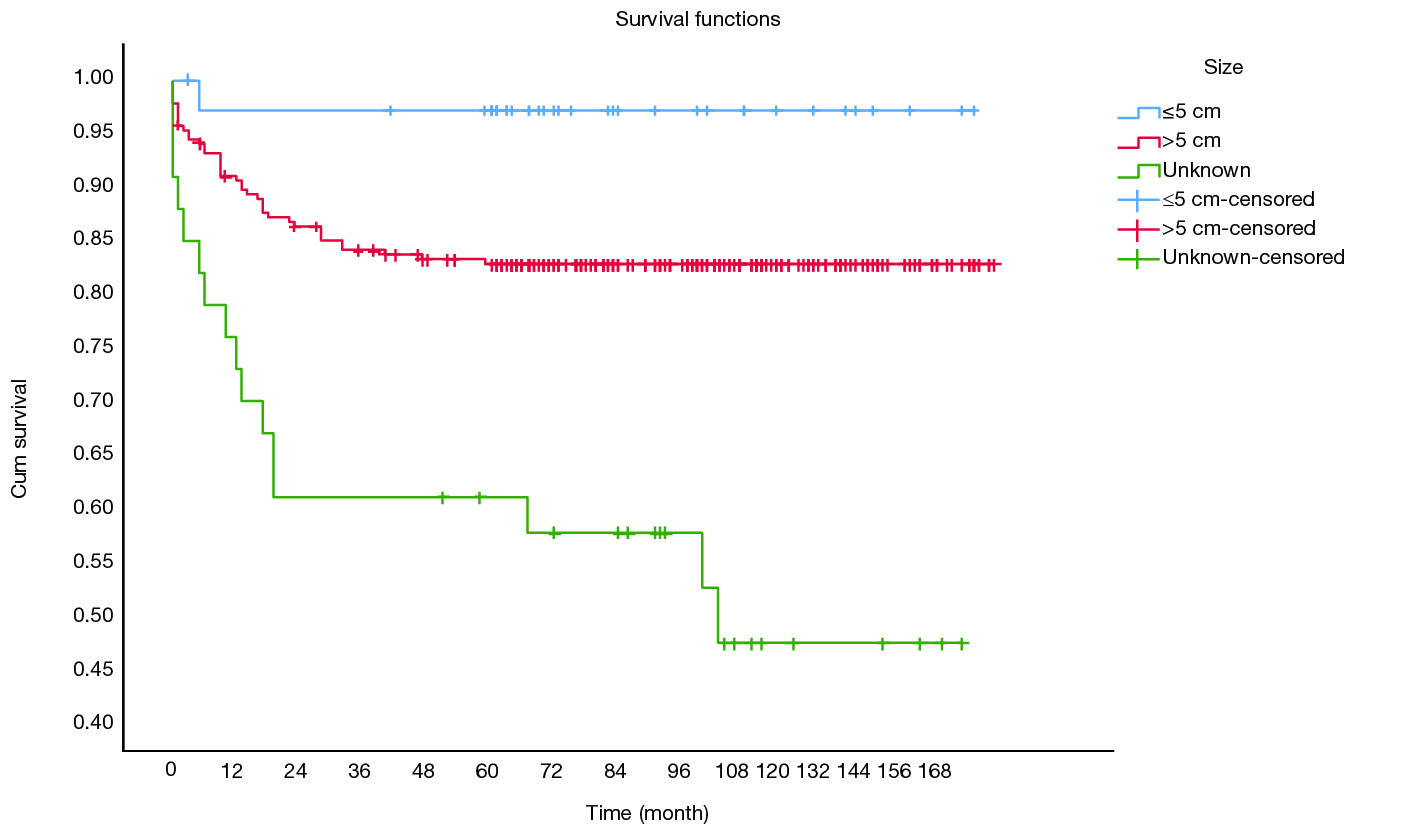 Figure 6 Survival curves for HB which were stratified according to tumor size. ≤5 vs. >5 cm, P=0.031. HB, hepatoblastoma. 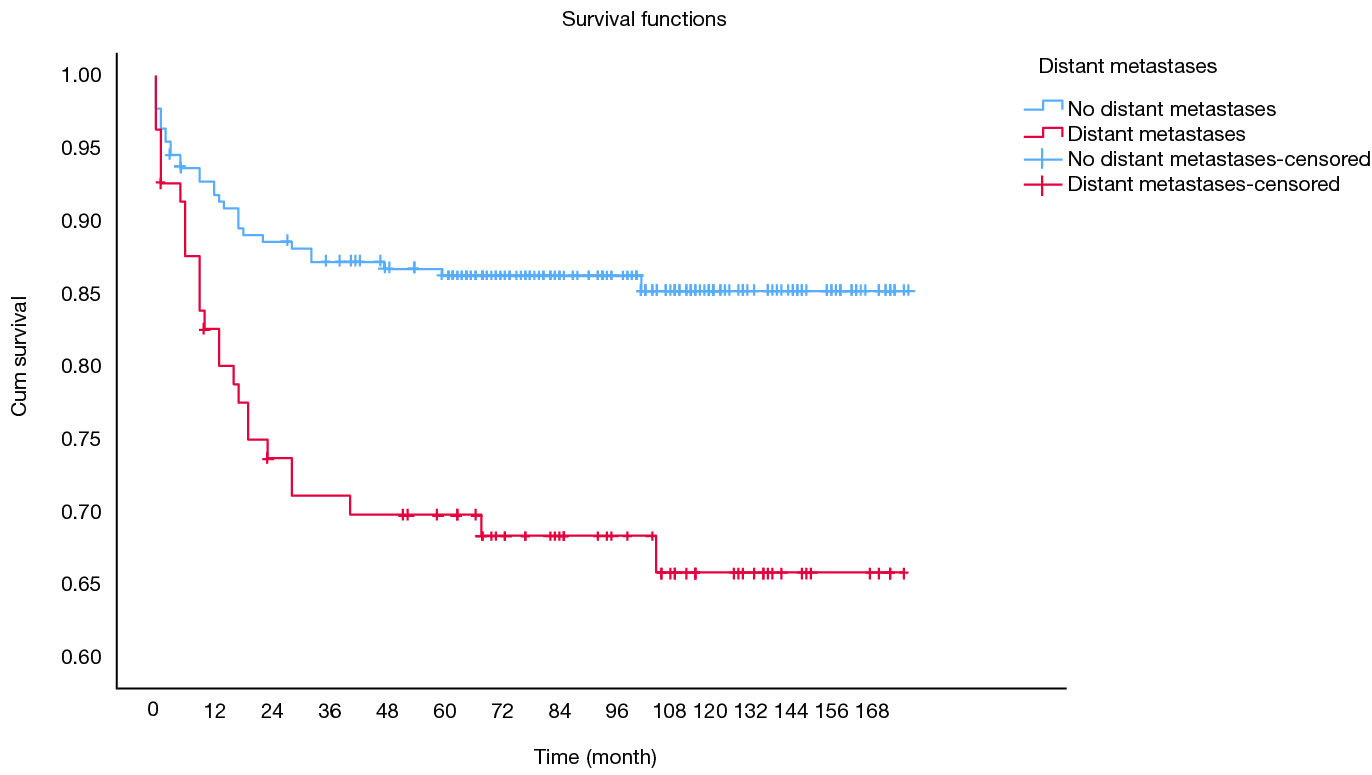 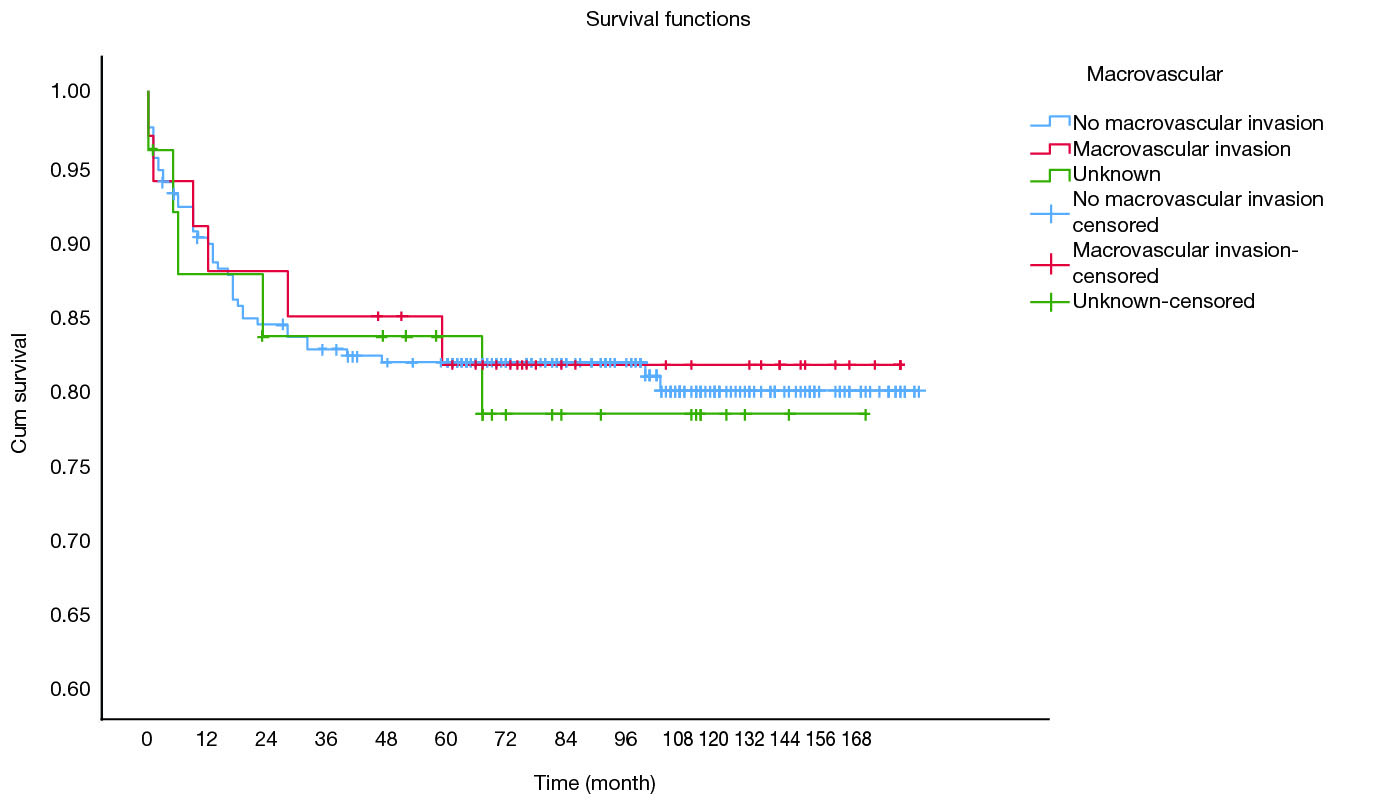 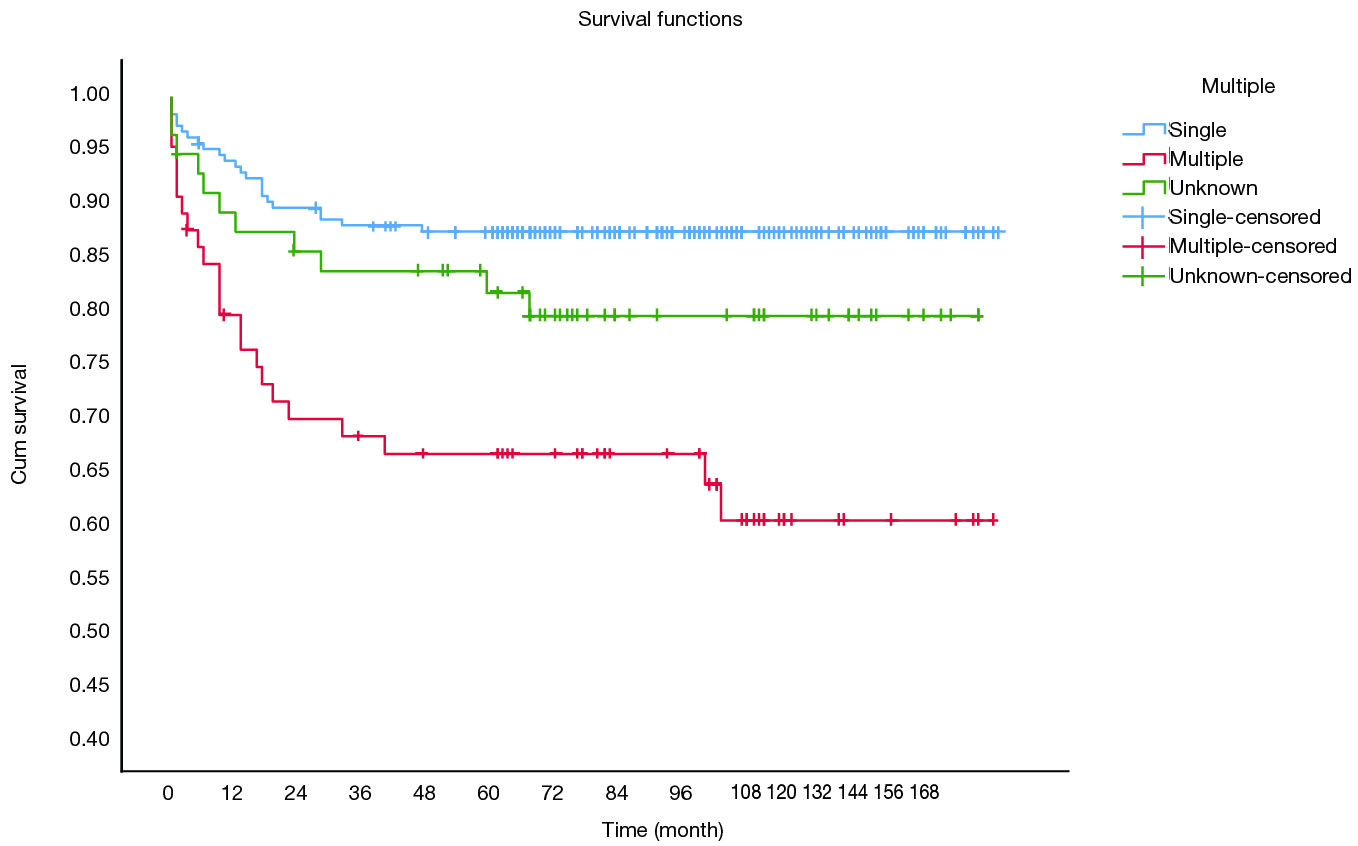 Figure 9 Survival curves for HB which were stratified according to multiple tumors or not. Single tumor vs. multiple tumors, P<0.0001. HB, hepatoblastoma. 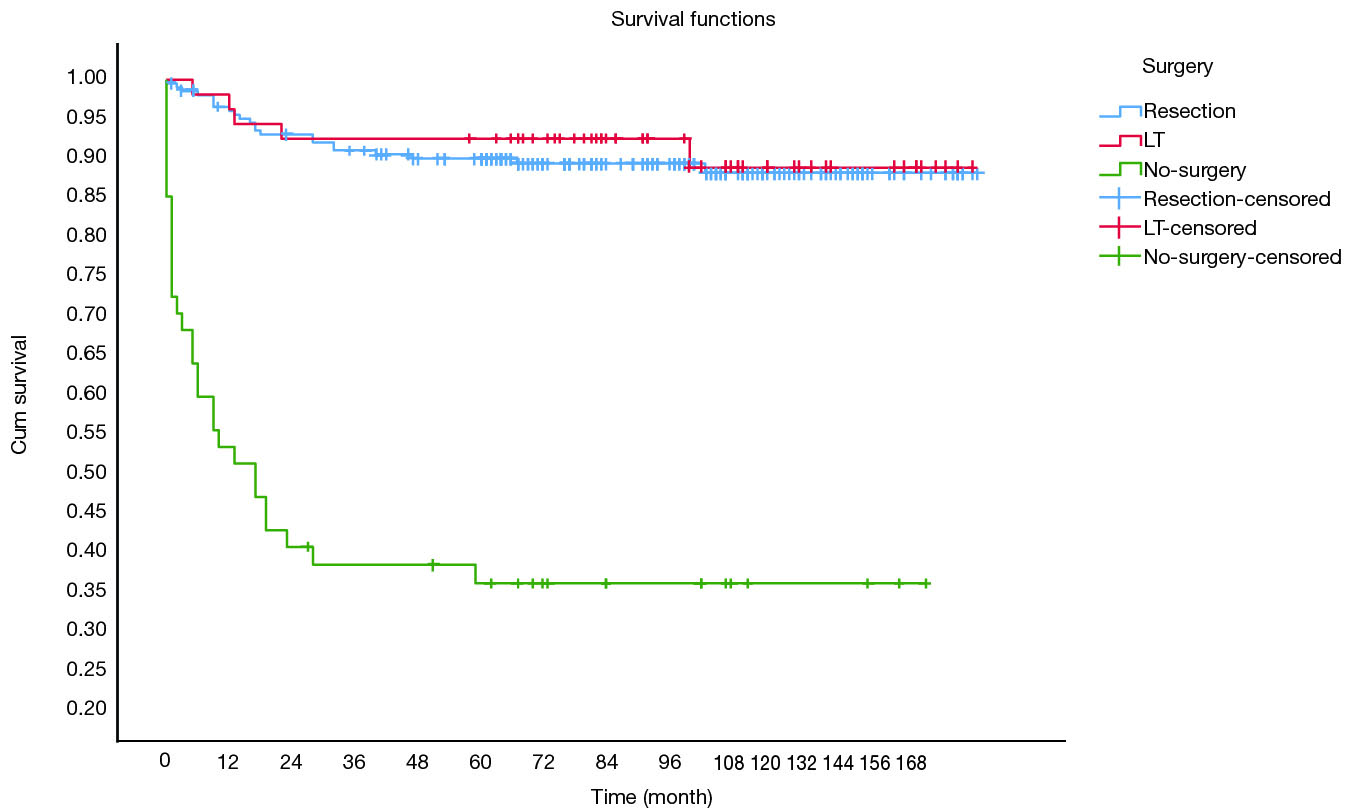 Multivariate analysis for all patients 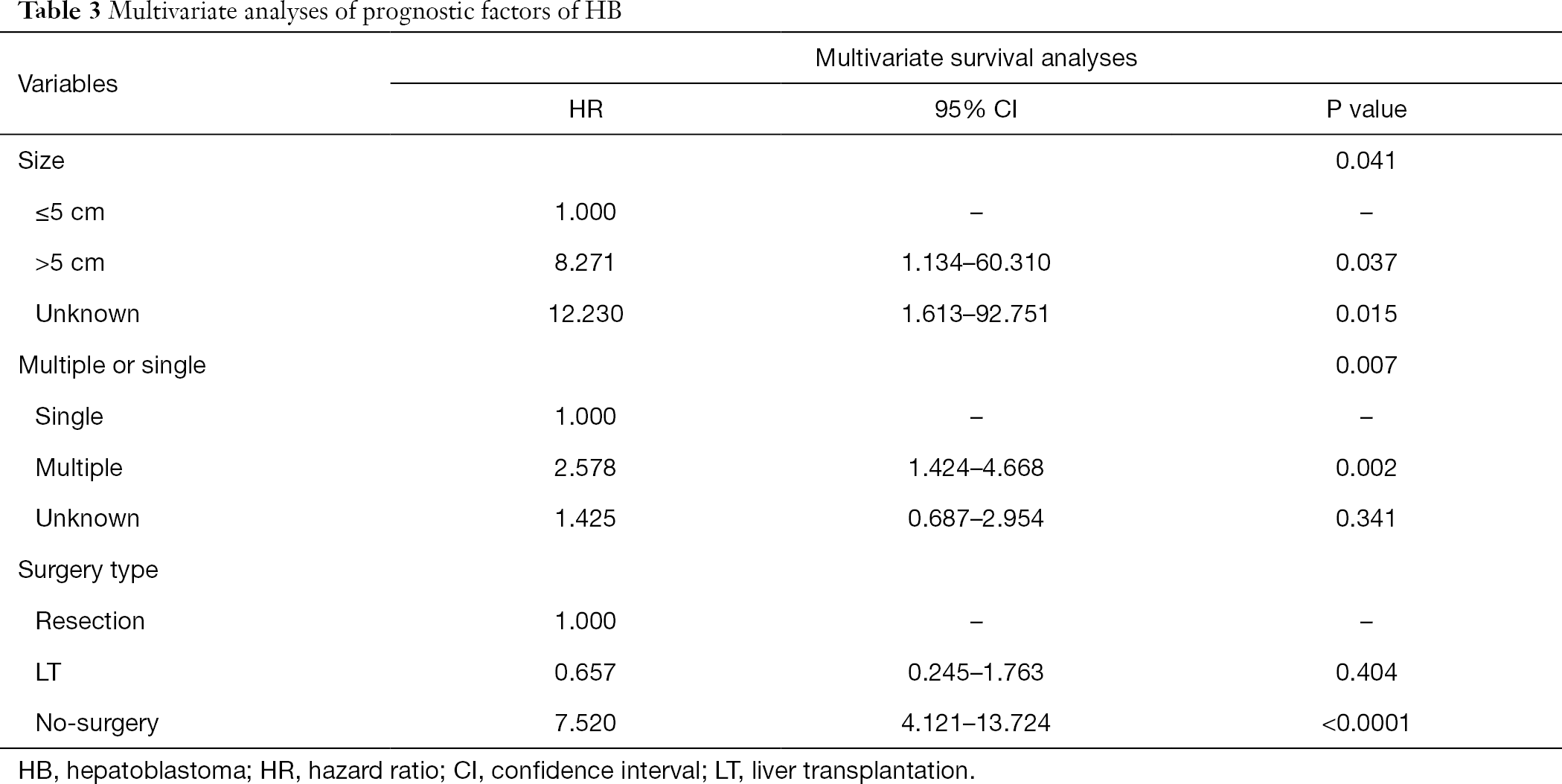 Univariate and multivariate analysis for the surgical treatment group

In order to further identify the prognostic factors of the surgical treatment group, the resection group and the transplantation group were analyzed. Univariate analysis showed that the age ≥2-year-old, distant metastases, multiple tumors, and tumor size >5 cm were the risk factors of prognosis. However, in multivariate analysis, only the age ≥2-year-old (HR, 3.240; 95% CI, 1.433–7.326) and multiple tumors (HR, 2.395; 95% CI, 1.057–5.430) were the risk factors for the surgical treatment group. The detailed information is shown in Tables 4,5. 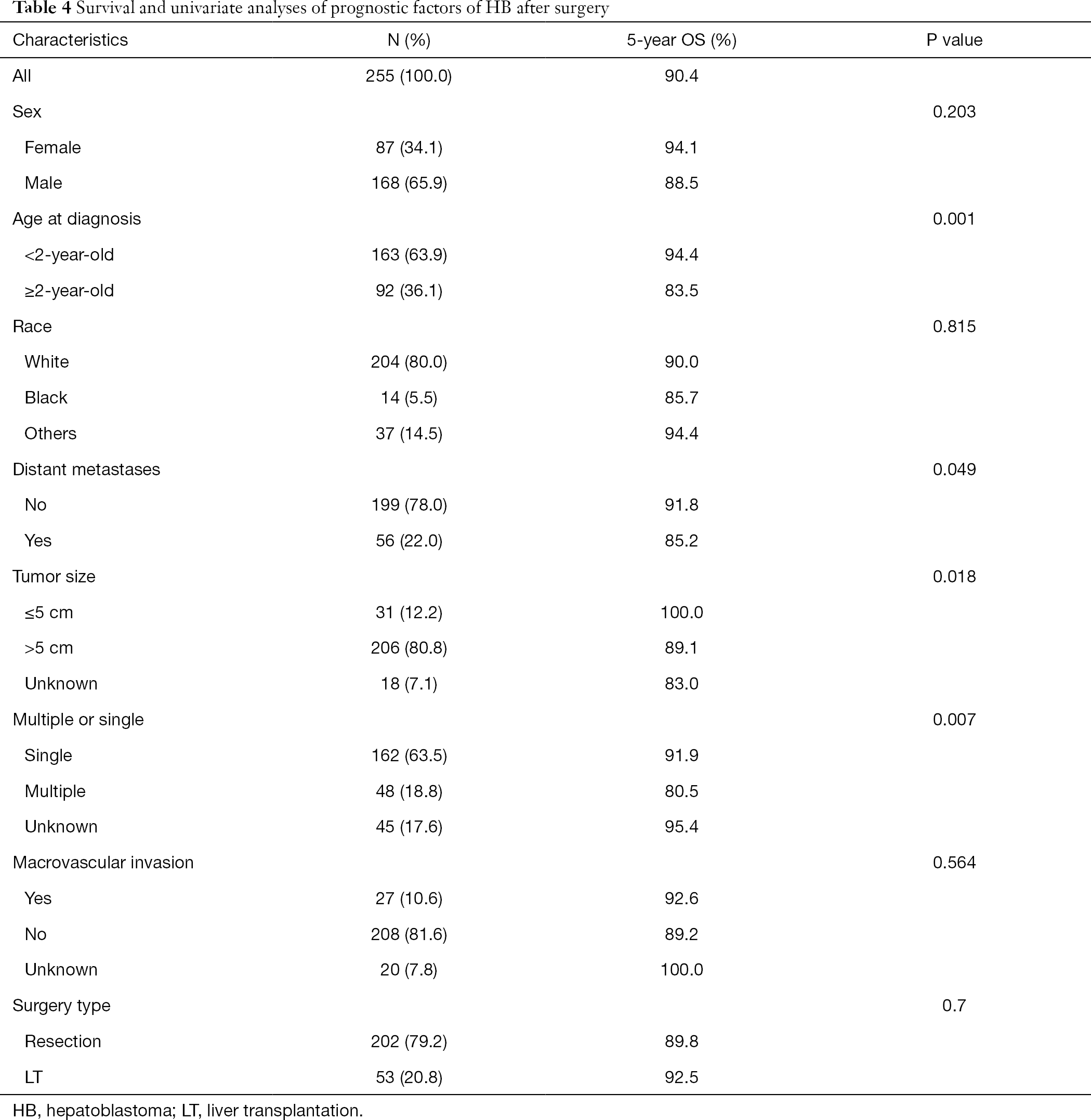 Although HB is the most common type of primary liver malignancy in children, its incidence is still very low. According to our results, the overall age-adjusted incidence of HB was 0.19 patients per 100,000 children. However, it is worth noting that its incidence is still increasing year by year, although we cannot find out the exact cause of this.

The prognosis of HB was gloomy 40 years ago. Because of multiple lesions or distant metastases at the time of diagnosis, radical surgery cannot be performed. Children usually died within six months after diagnosis, and the OS rate is less than 30%. The change in treatment is mainly based on a series of studies conducted by SIOPEL. In 2000, neoadjuvant therapy was used to reduce the tumor stage before surgery, and the 5-year OS was 75%. Since then, the status of neoadjuvant chemotherapy in the treatment of HB has been established, and survival has begun to increase. Previous studies based on the SEER database showed that the overall 5-year survival of HB was 52–63% (1,13,14). Our study shows that the 5-year OS of all patients was 81.9%, significantly higher than that of previous studies. The reason for this phenomenon may lie in the use of surgical techniques and medical devices and better chemotherapy regimens. By studying HB at different periods, Horton et al. (14) also found that the 5-year OS in 1973–1982 was only 36%, while the OS reached 63% in 1983–2005. This is similar to our standpoint.

No-surgery has become the most important factor affecting survival. The 5-year OS of the resection group can reach 89.8%, while only 35.8% in no-surgery group. The prognosis of the resection group was similar to that of the transplant group, which was similar to previous studies (15). Age has become an important prognostic indicator in many cancer studies. Although age was not considered as a risk factor in the initial PRETEXT stage, age became an important stratification factor in the recent stages by Children’s Hepatic tumors International Collaboration (CHIC), and cut-off values were 3- and 8-year (16). We draw the survival curves by age group and found that the survival of 1- and <1-year group were better than those older than 2-year, suggested that 2-year may be the cut-off value that affects the prognosis of HB. Although age was not an independent predictor in the multivariate analysis for all patients, ≥2-year-old was the only risk indicators in the multivariate analysis of the surgical treatment group.

In previous studies, distant metastasis, and macrovascular involvement were important prognostic factors. In our study, macrovascular involvement was not a risk factor either in univariate analysis or multivariate analysis. At the same time, distant metastasis of the tumor has prognostic significance only in univariate analysis. There were two possible reasons for these results. One may be the data were too few to distinguish variable (the macrovascular involvement group had 33 cases). The other reason may be that the impact of these factors was less important by using chemotherapy. More and more researchers believed that tumor response to chemotherapy was an important marker for predicting long term survival (17,18). In the latest stratified PRETEXT staging, PRETEXT IV patients with no distant metastases, <3-year and alpha-fetoprotein (AFP) >100 ng/mL, with or without traditional risk factors (such as macrovascular invasion, multifocal, extrahepatic invasion and other factors) all had similar prognosis (16).

Similarly, the current view is that even if there is distant metastasis at the time of diagnosis, if the tumor is sensitive to chemotherapeutic drugs, surgical resection or transplantation can still be used to achieve good survival. Our study also confirmed this (the survival of the distant metastasis group was 85.2% after surgery). We believe that it is necessary to re-examine traditional risk factors, including distant metastasis, and more studies are needed to confirm our hypothesis.

Our research also has many shortages. First, because the SEER database does not provide internationally popular PRETEXT stages, there is no way to compare survival conditions with other clinical studies that adopt this staging approach. Second, we lack some clinical data, such as AFP, lymph node metastasis of the tumor, spontaneous rupture, and chemotherapy regimen. Third, due to retrospective studies, there is selective bias. In the end, in our article, there is some unknown data in some variables, such as tumor size, multiple tumors, and macrovascular involvement, which may have an impact on the results. However, even though the SEER database provides reliable follow-up, we believe these survival data are real and reliable.

In conclusion, through the above analysis, we believe that the survival of patients with HB has been greatly improved in the recent years, and at the same time, due to the application of better chemotherapy, we should re-evaluate the traditional risk indicators of prognosis in order to better apply to the clinical.

Ethical statement: The authors are accountable for all aspects of the work in ensuring that questions related to the accuracy or integrity of any part of the work are appropriately investigated and resolved.