Association between TIM-3 polymorphisms and cancer risk: a meta-analysis

T-cell immunoglobulin- and mucin-domain-containing molecule 3 (TIM-3), also known as hepatitis A virus cellular receptor 2 (HAVCR2), is a T-helper 1 (Th1)-specific cell surface protein and functions to regulate an immune checkpoint by activating macrophages and enhancing experimental autoimmune encephalomyelitis severity (1,2). TIM-3 also served as a specific cell surface marker for Th1 CD4+ T lymphocytes, CD8+ T lymphocytes, dendritic cells, Th17 lymphocytes, but not for Th2 cells and is a member of the Ig super family (3-5). The Tim-3 pathway may interact with the programmed cell death 1 pathway in dysfunctional CD8+ T cells and Tregs in cancers (2). Molecularly, TIM-3 interactions with its ligand, galectin-9, will negatively regulate tumor infiltrating CD4+ T and CD8+ T cells via the selective elimination of TIM-3-positive T cells to control T lymphocyte populations and activities (6,7). Functionally, TIM-3-positive CD4+ and CD8+ T cells reduce the production and secretion of cytokines and/or show less proliferation after exposure to tumor antigens (7). In contrast, the inhibition of TIM-3 expression or activity was shown to restore antigen-induced specific cell proliferation and cytokine levels (7). Thus, altered TIM-3 expression would be considered to be involved in cancer susceptibility. Notably, a recent meta-analysis demonstrated that higher TIM-3 expression was associated with advanced tumor stage and shorter overall survival of patients with various cancers, including bladder cancer, non-small cell lung cancer, gastric cancer, ovarian cancer, cervical cancer, hepatitis B virus-associated hepatocellular carcinoma, and clear cell renal cell carcinoma (8). Targeting of TIM-3 was considered in a novel cancer immunotherapy strategy (9). In this regard, the assessment of TIM-3 alteration and activity could help us understand the role of TIM-3 in cancer susceptibility.

We searched literature for all published studies that assessed an association between TIM-3 polymorphism and cancer in PubMed, EMBASE, China Biology Medical Literature Database (CBM), Wanfang Data, and the China National Knowledge Infrastructure (CNKI) (up to July 10, 2018). TIM-3 is also known as “CD366, HAVCR2, KIM-3, TIM3, TIMD-3, TIMD3, or T-cell immunoglobulin mucin-3”; thus, our search also included these words as keywords in addition to “polymorphism or single nucleotide” and “carcinoma or neoplasms”. Moreover, in the CBM, Wanfang, and CNKI databases, our search terms used these corresponding keywords in Chinese characters. Our literature search was only restricted to human studies. Next, we retrieved all eligible studies and checked their bibliographies for further relevant publications. If insufficient data were available in trial publications or for unpublished trials, we contacted the investigators to obtain the data. The inclusion criteria included (I) case-control or nested case-control studies focusing on the association between TIM-3 and cancer risk; (II) having adequate data to calculate the genotypic odd ratio (OR) and corresponding 95% confidence interval (CI), including total number of cancer cases and controls, as well as the number of cases and controls for each genotype; (III) all full text articles. The exclusion criteria were (I) publication of reviews, tutorials and letters; (II) animal studies; and (III) duplicate publications. However, when a similar or identical patient population was used in several publications, we only selected the most recent, largest, or complete study for our data analysis. If more than one ethnic population was enrolled in a study, each population was regarded as an independent study for our data analysis.

Data were extracted independently by two investigators (H Fang and M Sun) from all eligible studies, which included the first author’s name, year of publication, country, ethnicity of the population, tumor types, sample source, genotyping methods, matching criteria, genotype distribution and control source, Hardy-Weinberg equilibrium (HWE), and number of participants with each genotype in the cases and controls.

Quality assessment was also performed by two investigators (H Fang and M Sun) independently using the Newcastle-Ottawa Scale (NOS) according to a previous publication (15). The NOS contains eight items, which are categorized into three perspectives, i.e., selection of the study group and the comparability and exposure of the interest. In this study, we scored the quality of each study for a maximum of 1 point for each item in the selection and exposure perspectives and a maximum of 2 points in comparability. Any discrepancy was solved through discussion between the two investigators. If they could not reach a consensus, other investigators were consulted to resolve the discrepancy to make a final decision through a vote majority.

The HWE was estimated first in controls for each study using the χ2 test and a P value <0.05 was considered to indicate significant disequilibrium according to a previous study (16). The crude OR and 95% CI calculated using Woolf’s method were used to estimate the association between TIM-3 polymorphism and cancer susceptibility under the dominant, recessive, homozygous, heterozygous, and allelic models. The heterogeneity across all eligible comparisons was assessed using χ2-based Cochrane’s Q statistics (the significance level was set at P<0.10) according to a previous study (17) and the I2 statistics. The following thresholds were used to quantify the I2 metric: I2=0–25%, no heterogeneity; I2=25–50%, moderate heterogeneity; I2=50–75%, large heterogeneity; I2=75–100%, extreme heterogeneity (18). Furthermore, the data were combined using both fixed effect (Mantel-Haenszel) (19) and random effect (DerSimonian and Laird) (20) models. Unless stated otherwise, the random effect estimates were reported. Meta-regression analysis was applied to detect the source of heterogeneity. To explore the sources of in-between-study heterogeneity, we conducted a stratified analysis according to the source of control groups and the type of cancer.

To assess the impact of a single study on the pooled OR and to confirm the stability of the results, we performed a sensitivity analysis to repeat analyses by the sequential removal of individual studies (21). The Funnel plots and Egger’s test (22,23) were used to explore the presence of publication bias.

Regarding the haplotype association analysis, we utilized a multivariate analysis strategy with summary-based data and methods that used count data in a generalized linear mixed model framework (logistic regression).

In this study, we identified a total of 40 studies (39 from PubMed and one from CBM and CNKI). After removing duplicated studies, we excluded 29 publications and abstracts and obtained 11 publications. While inspecting their full-text, we found that two studies were not relevant to TIM-3 SNPs association and that one study contained overlapping data; thus, these three studies were also excluded (21). Eight studies (13,14,24-29) remained, the data of which were incorporated into our systematic review and meta-analysis (Figure 1). 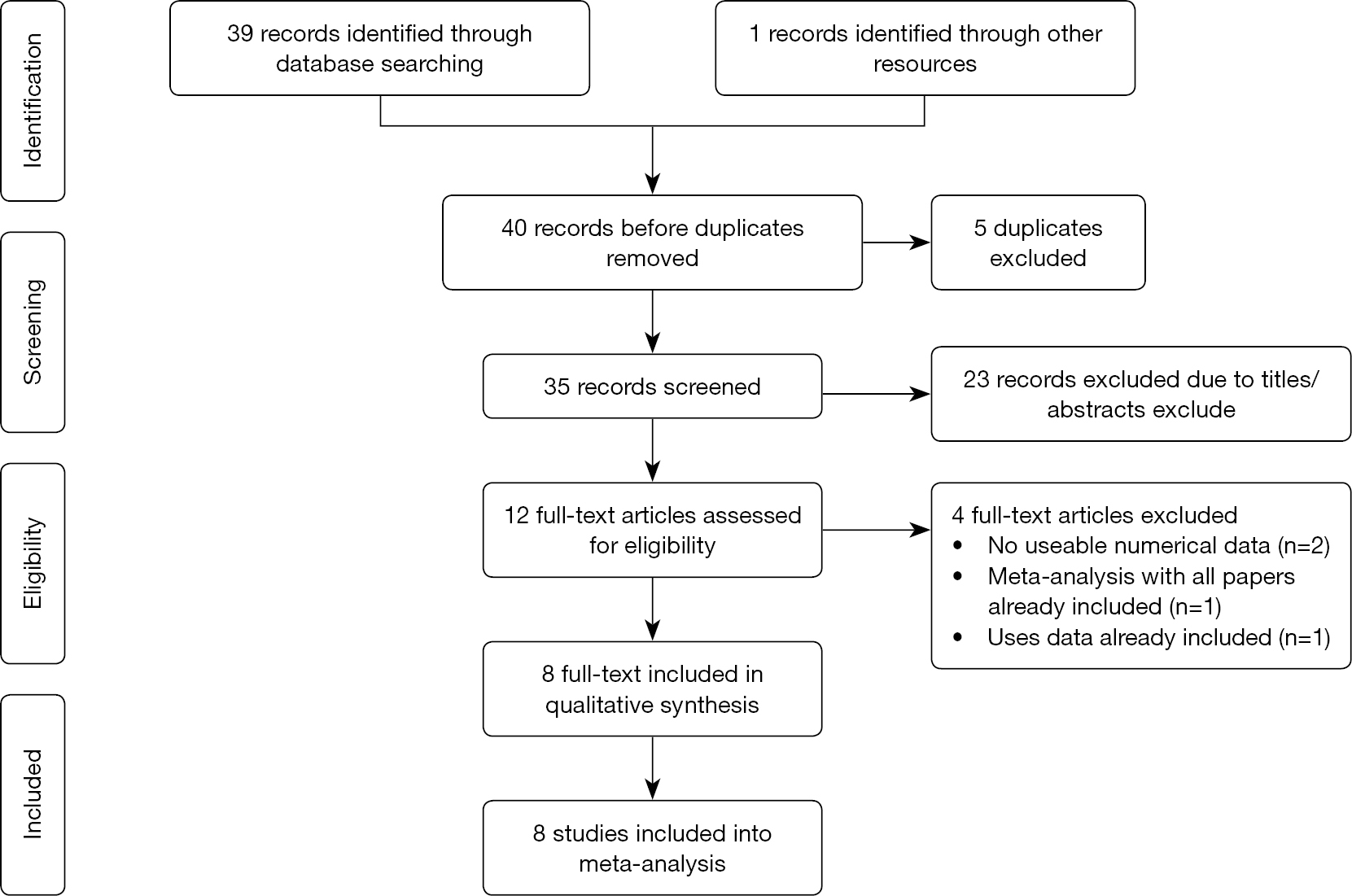 Characteristics of the included studies

All eligible publications were case-control studies with a total of 4,852 participants (2,229 cases and 2,623 controls). Seven publications were in English, and one was in Chinese (13). However, all studies were performed in China, and the genotype distributions in the controls met the HWE. 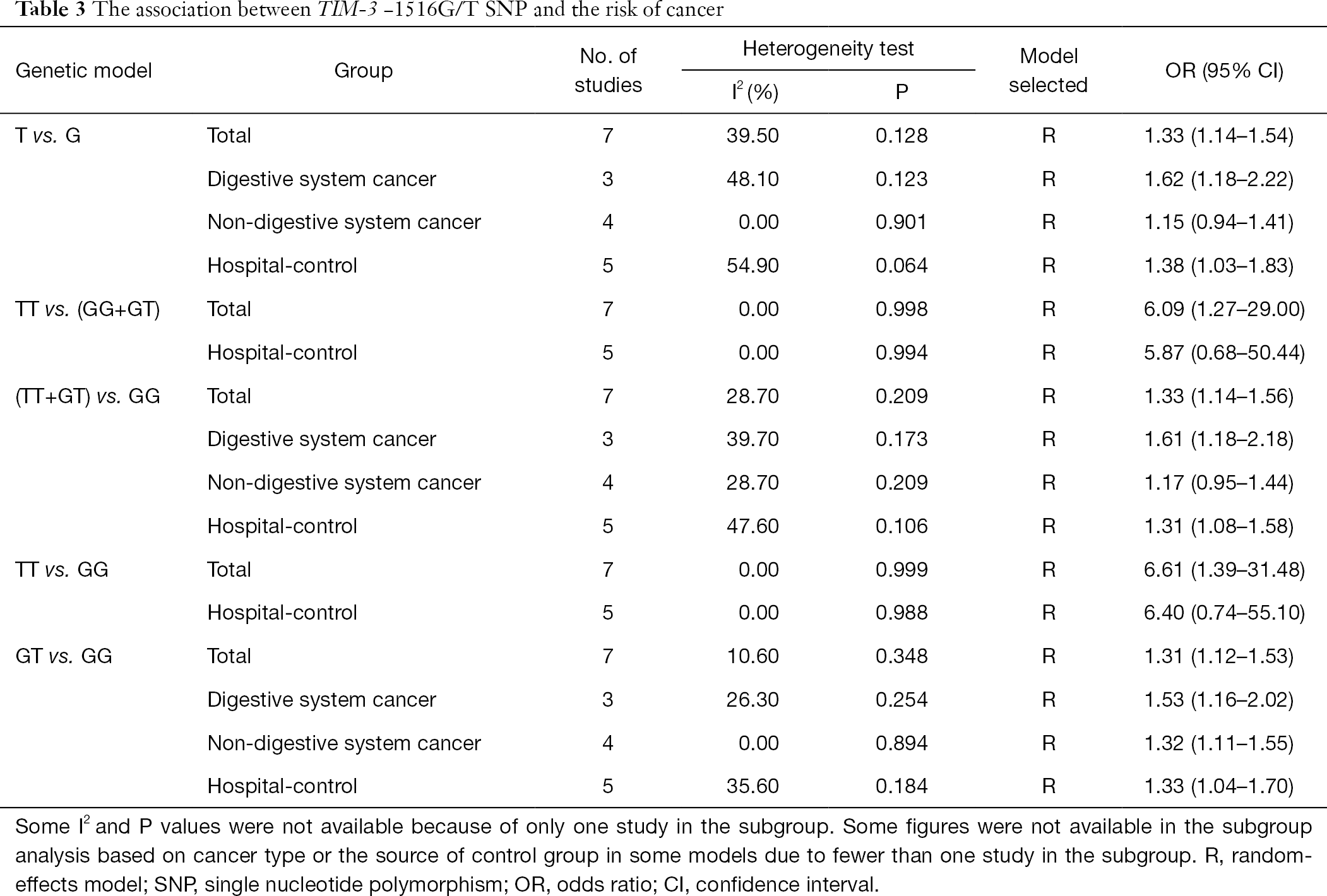 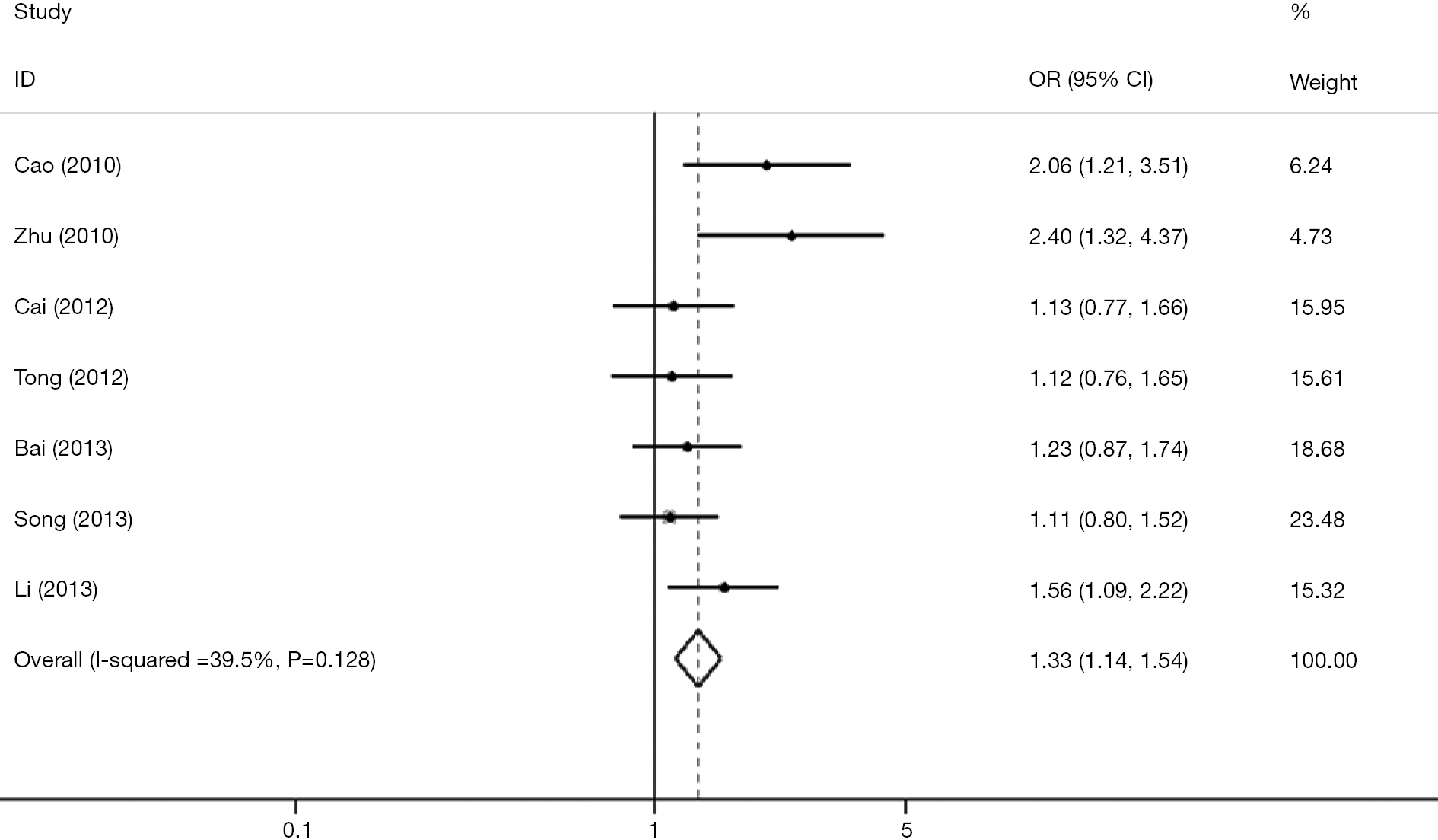 Two studies assessed the association between TIM-3 −882C/T and cancer risk (13,24). We did not make a pooled estimate with only two studies. The data in the original two studies showed that subjects carrying the CT genotype and T allele had a significantly increased risk of cancer compared with those carrying the CC genotype and C allele, respectively (T vs. C, CT vs. CC, Figure S1, Table S1). 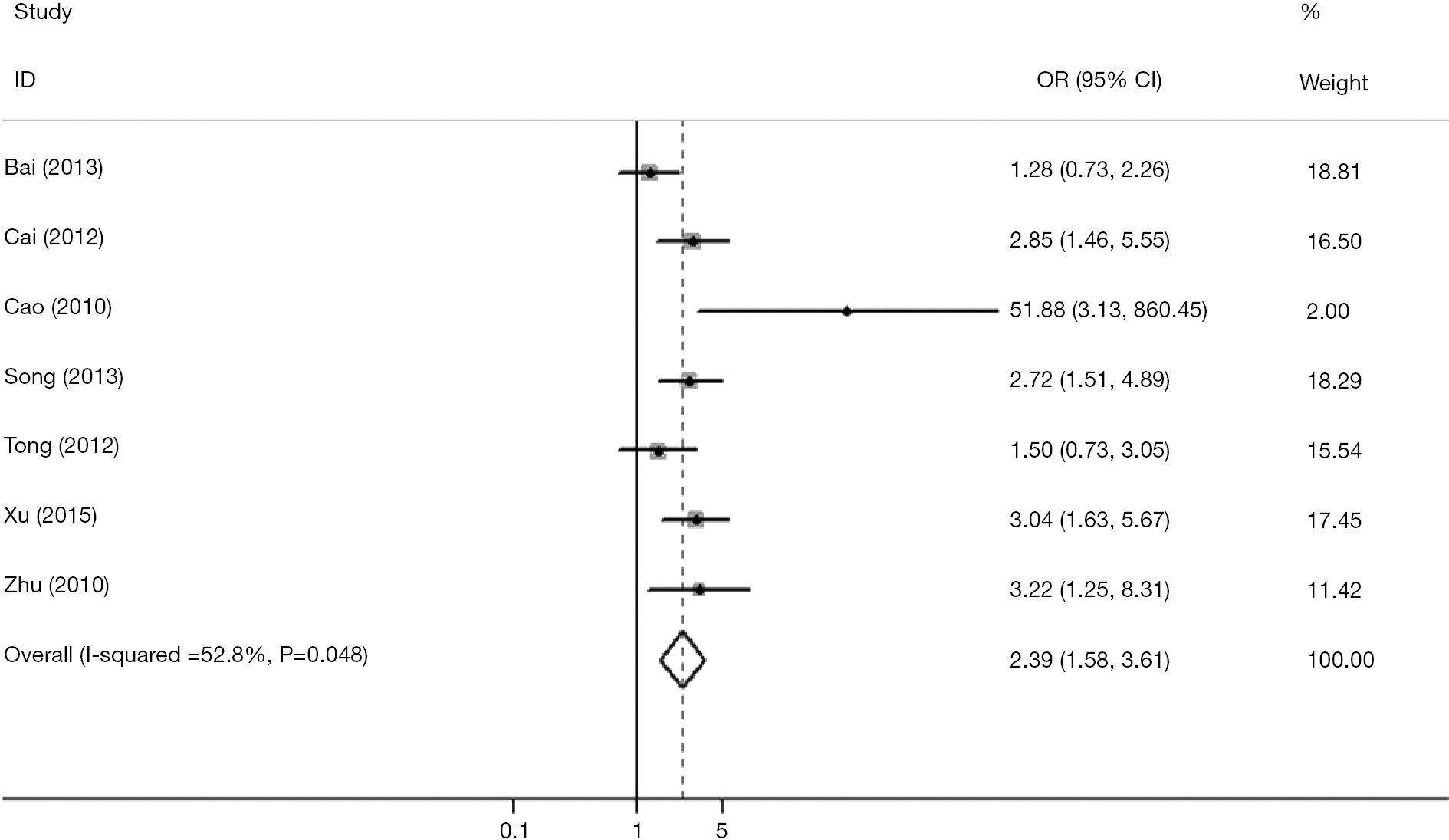 We retrieved five studies that determined the association between TIM-3 +4259 T/G and cancer risk in 1,868 cases and 2,566 control subjects (Table 5). The data showed that subjects carrying the GT genotype, GG+GT genotype, or G allele had a significantly increased risk of overall cancer compared with those carrying the TT genotype, TT genotype or T allele, respectively [G vs. T (Figure 4); GT vs. TT; (GG+GT) vs. TT]. In the sensitivity analyses based on the source of control, we found that the TIM-3 +4259T/G polymorphism was associated with an increased cancer risk in the hospital population [T vs. G; (GG+GT) vs.TT]. The three forests of the association between TIM-3 polymorphism (−1516G/T, −574G/T, +4259T/G) and cancer risk (the allelic model) were in Figures 2-4. 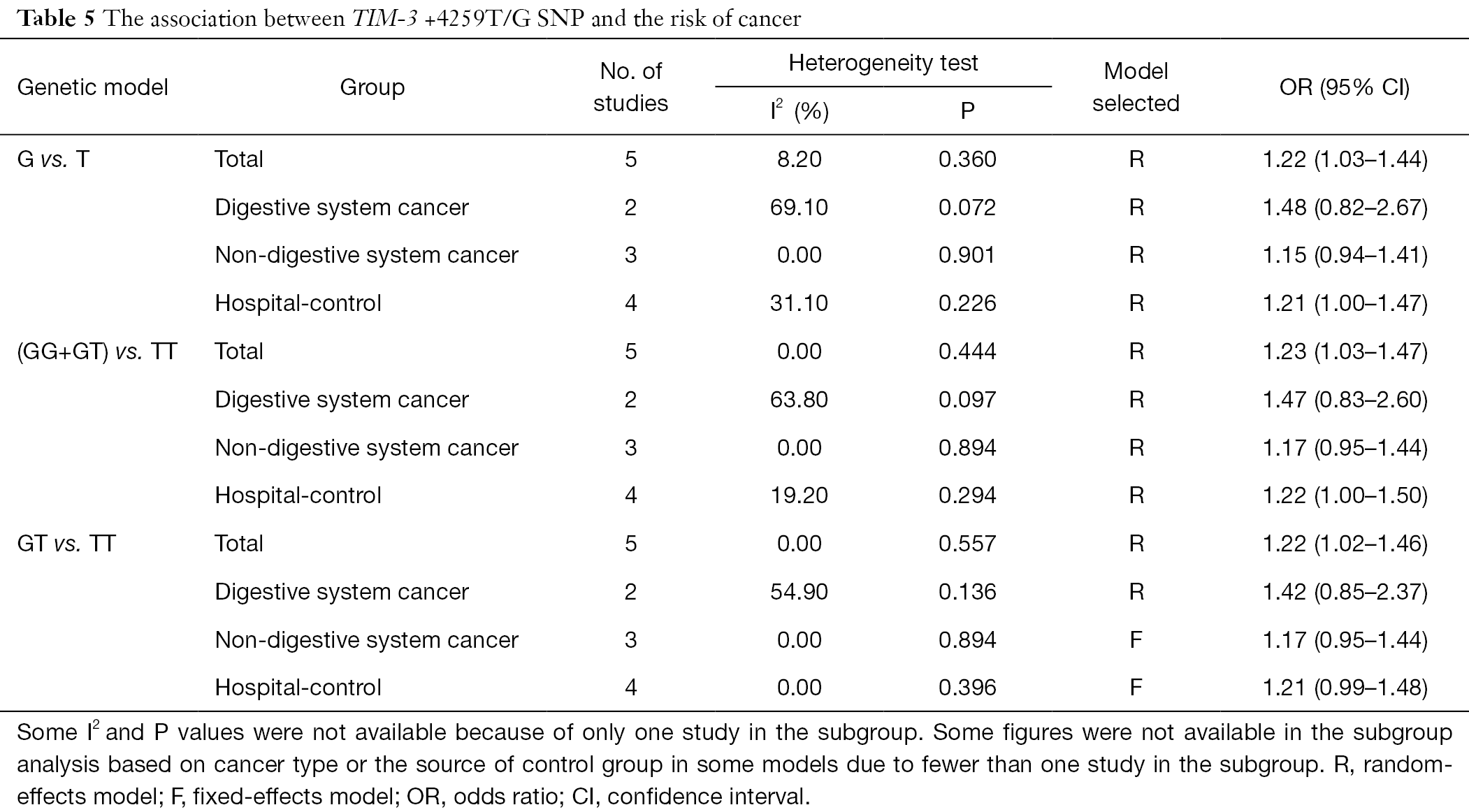 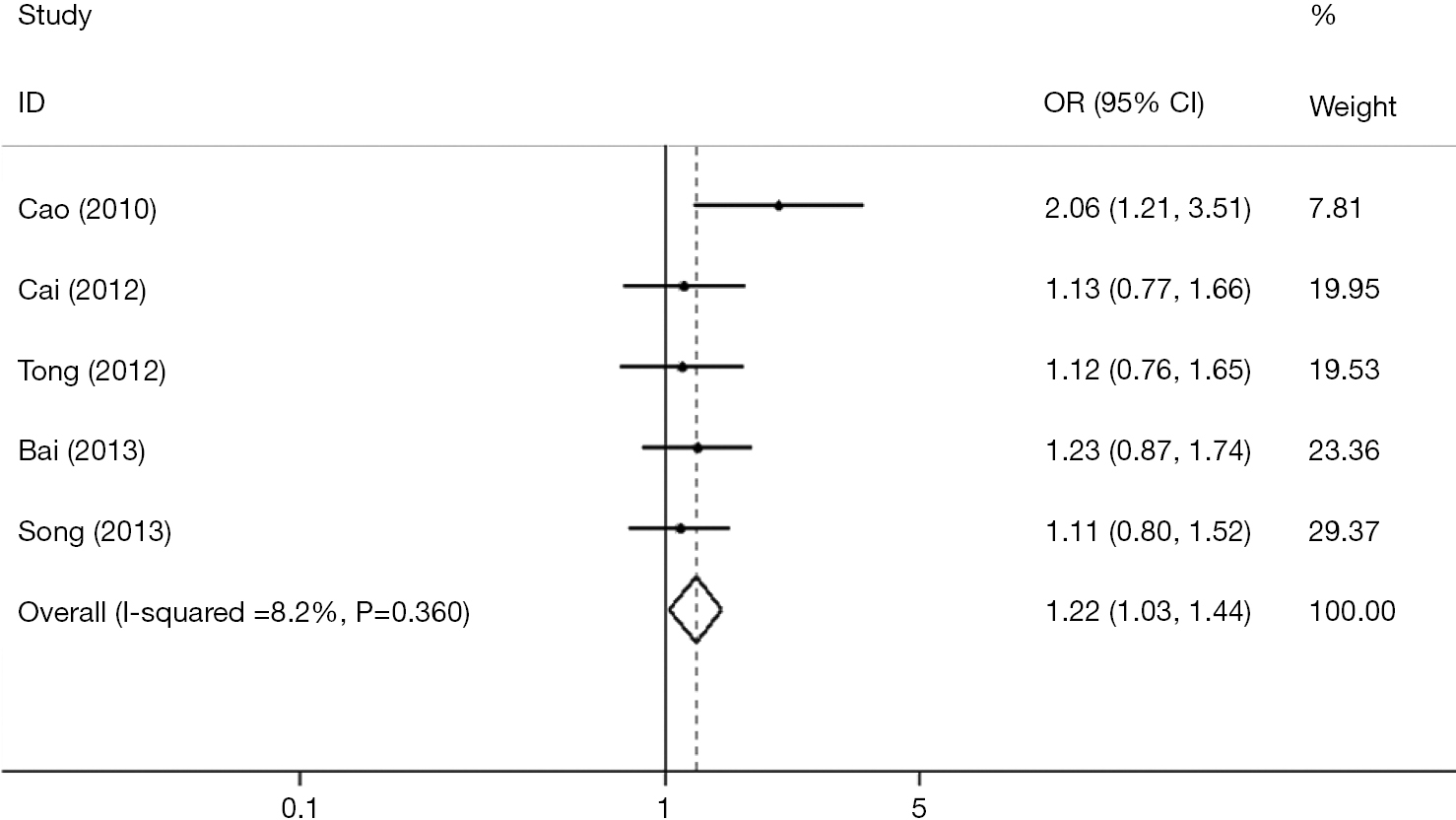 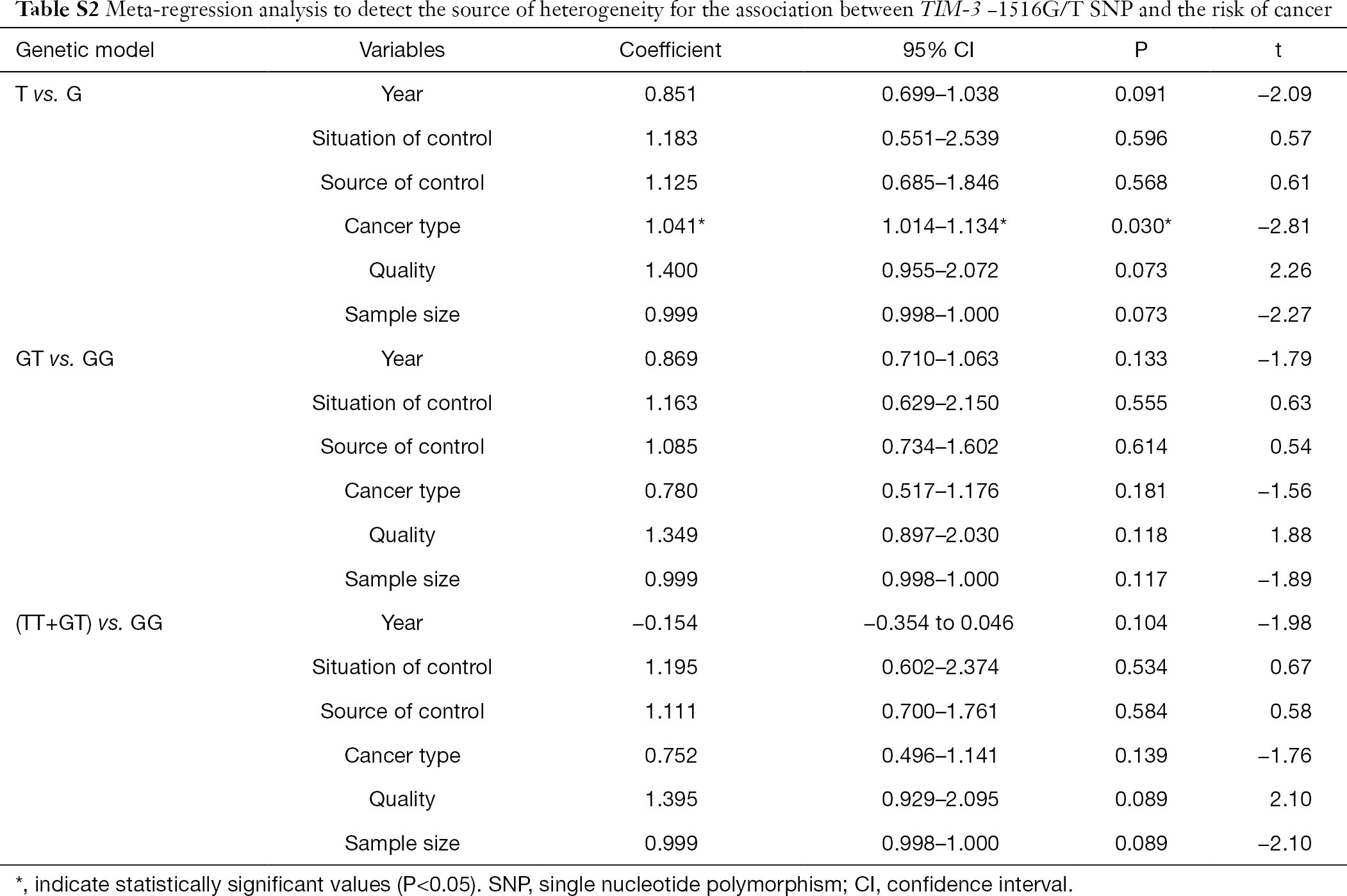 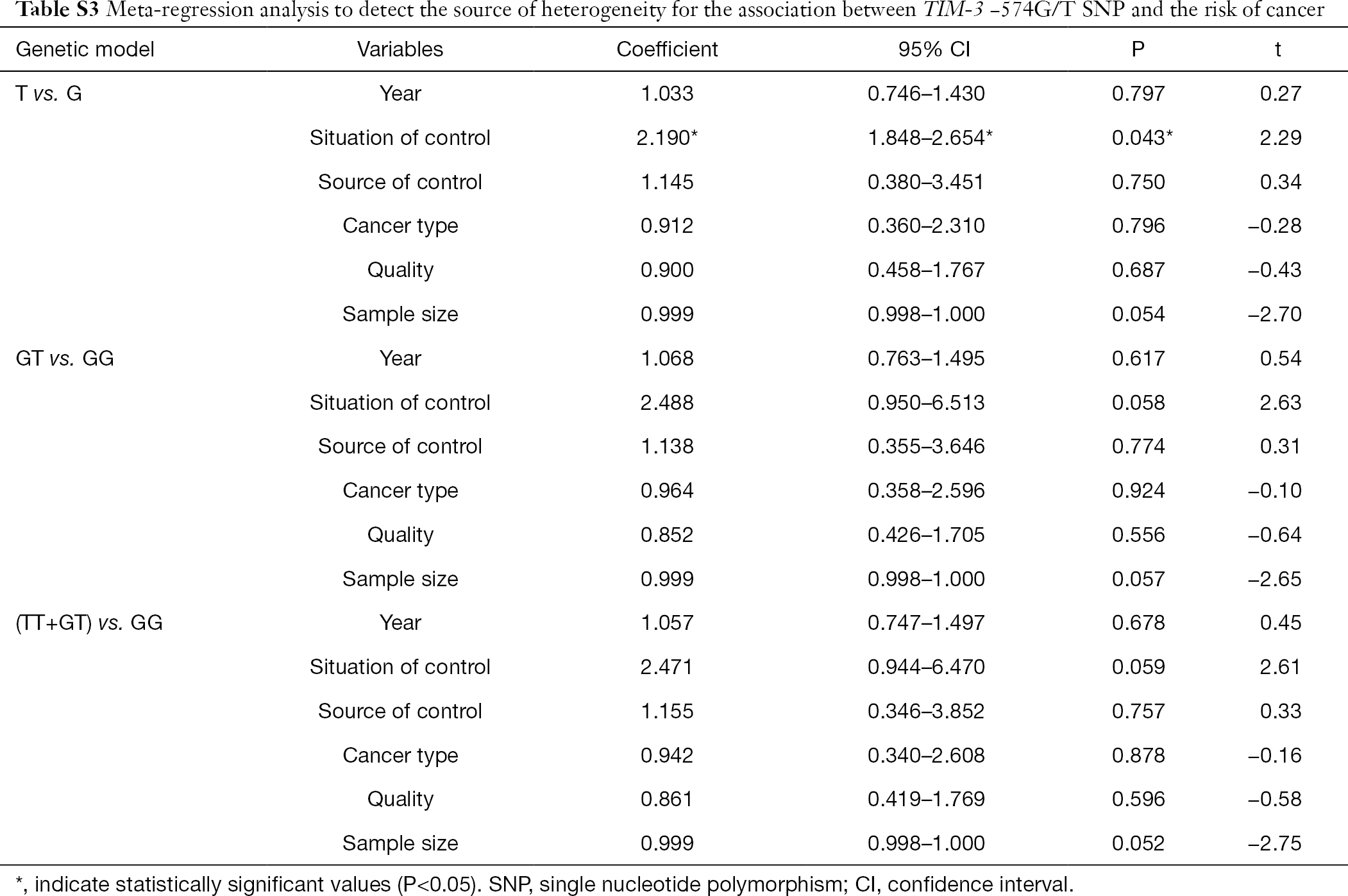 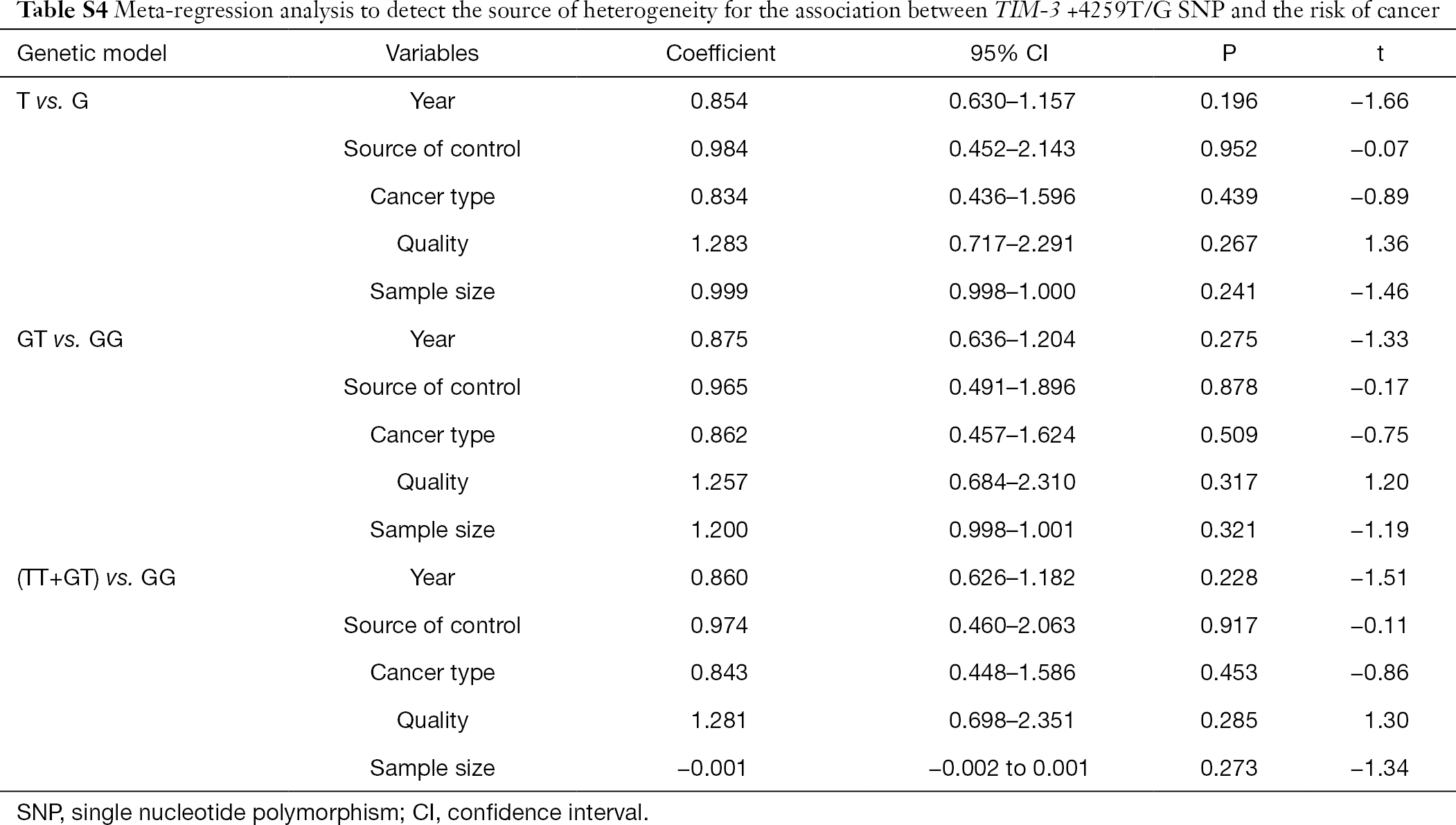 We performed a sensitivity analysis and found that there no single studies altered the pooled OR qualitatively, which indicated the stability of this meta-analysis. We then performed Egger’s test and found that those combined analysis had a publication bias under the T vs. G (Figure 5), GT vs. GG, (TT+GT) vs. GG model for the TIM-3 −1516G/T polymorphism (P=0.002, P=0.012 and P=0.017, respectively). 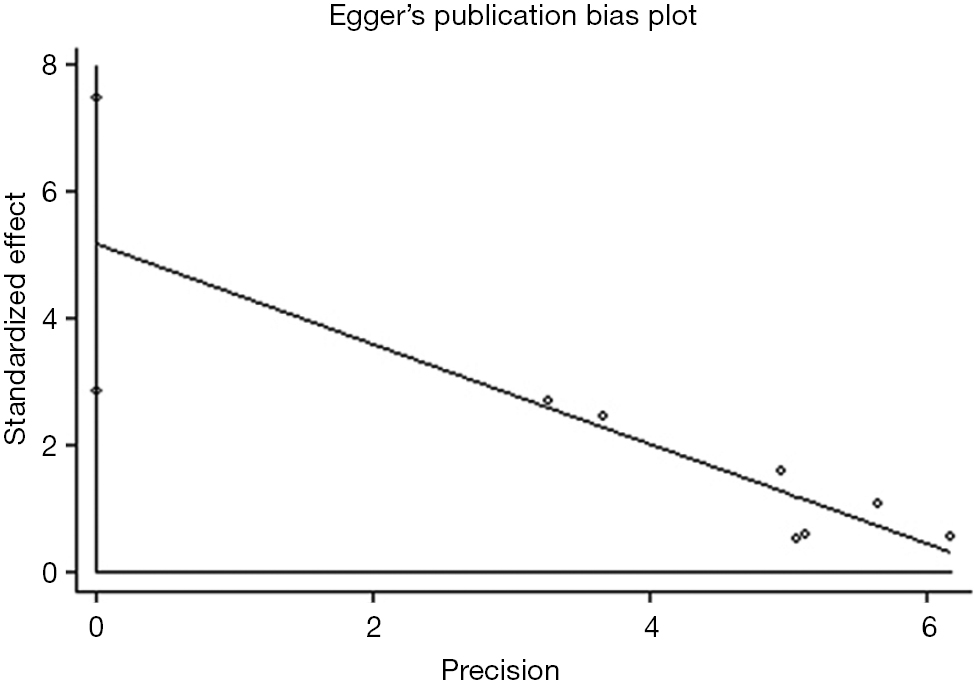 Notably, the human TIM-3 gene contains 23,000 base pairs of DNA with 7 exons, while the TIM-3 protein was characterized by an N-terminal Ig domain of the V subset, followed by a mucin-like domain, single transmembrane domain, and a cytoplasmic tail of variable length. Different TIM-3 polymorphisms could affect TIM-3 expression and impact the protein functions, e.g., the TIM-3 +4259T/G polymorphism was reported to affect exons 3 and the mucin-like domain of the protein (10). Thus, the TIM-3 polymorphisms were associated with cancer susceptibility in human beings.

Gastric cancer is the fourth most common cancer and the second leading cause of cancer-related death in the world (30). A number of risk factors contribute to gastric cancer development, among which Helicobacter pylori infection is important (31). Chronic inﬂammation of the gastric mucosa induced by H. pylori could gradually progress from inflammation and premalignant changes to a suitable microenvironment for tumor initiation and establishment (32). A previous study demonstrated that TIM-3 expression was markedly increased in lymphocytes in mice infected with H. pylori and that a change in Th1 cytokine had a similar tendency as that of TIM-3 expression, while the entire bacteria and the component of H. pylori were able to promote Th1 response (33). This animal model clearly supported that infection-induced TIM-3 expression altered the host immune responses and susceptibility of gastric cancer in humans. However, the underlying mechanistic link between TIM-3 polymorphisms and the risk in developing other cancers, such as non-small cell lung cancer, is unknown; however, immune responses and overall linking to tumor immunology and aberrant immune responses affect tumor development and progression. Thus, the study of TIM-3 in immune checkpoints and modulation could help researchers better understand tumor immunology and therapy (7).

Notably, a previous meta-analysis also showed an association between TIM-3 polymorphism and cancer risk (10). However, there are many differences between the current meta-analysis and the previous one (10), e.g., the current study analyzed four TIM-3 polymorphisms (−1516G/T, −574G/T, −882C/T, and +4259T/G), whereas the previous study only analyzed three; the current study also included an analysis of four TIM-3 haplotypes (GGT, TGT, GGG, and GTT). Moreover, we added a Chinese study (9) to our subgroup analyses. However, the further study of TIM-3 polymorphisms should be extended to other human cancers to accumulate sufficient cases and controls for individual cancer sites because different cancers carry different risk factors and molecular mechanisms of carcinogenesis. For example, exposure to various environmental factors, such as tobacco smoking, could lead to lung cancer development, while an increase in red meat intake could associate with colorectal and breast cancers. How these factors coordinate with TIM-3 polymorphisms to increase the risk of these cancers requires further study. In the current meta-analysis, we did not include these environmental factors for data analysis because (I) the original studies may not have these data and (II) the inclusion of these factors could cause heterogeneity and inclusive data.

In conclusion, the current meta-analysis demonstrated that these TIM-3 polymorphisms were associated with an increased risk in the development of human cancers. However, the results were obtained through sampling statics and statistical differences, which is not the same as a clinical difference; thus, the result can be only used for clinical reference and not for clinical diagnosis or the prediction of cancer development or risk.

The authors would like to thank Medjaden Bioscience Limited.