In the absence of a positive sputum bacteriological result, pathological and bacteriological examinations of lung lesion biopsies are important methods for confirming bacteriologically-negative tuberculosis (1). However, it is challenging to access the lesion in order to obtain a sufficient amount of tissue sample. Surgery is one of the most direct methods; however, it is invasive, expensive, and not suitable for all patient populations as a diagnostic technique. Percutaneous pulmonary puncture is a conventional method used for biopsy; it is minimally invasive and inexpensive and is thus widely used in clinical practice. However, this method is less precise when the lesion is tiny or locates at the inner one-third area of lung and is associated with high pneumothorax and bleeding rates (2). Tuberculosis specialists have thus been searching for an effective and minimally invasive method to access and diagnose lesions.

In endobronchial ultrasonography using guide sheath (EBUS-GS), a 360° small ring-shaped ultrasound probe is used for transbronchial access of the peripheral pulmonary area. A guide sheath is then used to establish a channel for biopsy under the guidance of ultrasound imaging of the lesion (3). In electromagnetic navigation bronchoscopy (ENB), a flexible catheter is guided by real-time positioning to access peripheral pulmonary lesions for biopsy (4). These two new endobronchial diagnostic techniques, when combined, greatly facilitate the diagnosis of peripheral pulmonary lesions (5) and are an especially useful, minimally invasive, effective diagnostic method for difficult pulmonary tuberculosis cases.

EBUS and ENB were introduced into Shanghai Pulmonary Hospital, China, in 2010 and 2014, respectively, and Shanghai Pulmonary Hospital was the first hospital in the Asia Pacific region to adopt ENB (6). We have diagnosed 78 cases of suspected atypical bacteriologically-negative pulmonary tuberculosis with these two techniques between June 2014 and March 2017. In this paper, we will discuss the clinical value of these two techniques.

Among 126 cases from June 2014 to March 2017, 34 (27%) cases showed lesions cannot reached by EBUS/ENB indicated by chest CT, 7 (5.6%) cases refused EBUS/ENB, and 7 (5.6%) cases lost to follow-ups. At last, a total of 78 patients were included in this prospective observational study, including 54 men and 24 women aged 19 to 76 (mean: 48±17) years with suspected pulmonary tuberculosis based on clinical manifestations, laboratory tests, and imaging studies (Figure 1). Of these patients, 33 received 14 days to 24 months of diagnostic anti-tuberculosis treatment that did not confirm tuberculosis. Patients underwent high-resolution computed tomography (CT) before bronchoscopy (Figure 2), and data was recorded on a CD. In addition, patients underwent relevant preoperative tests and exams, including electrocardiograms (ECG), blood clotting time assessment, routine blood tests, and HIV, syphilis, and hepatitis marker screens, to ensure that they did not have any contraindications for bronchoscopy. The study was in accordance with the amended Declaration of Helsinki and approved by the Ethical Committee of Shanghai Pulmonary Hospital. Patients and their families were informed about the study and signed informed consent forms. 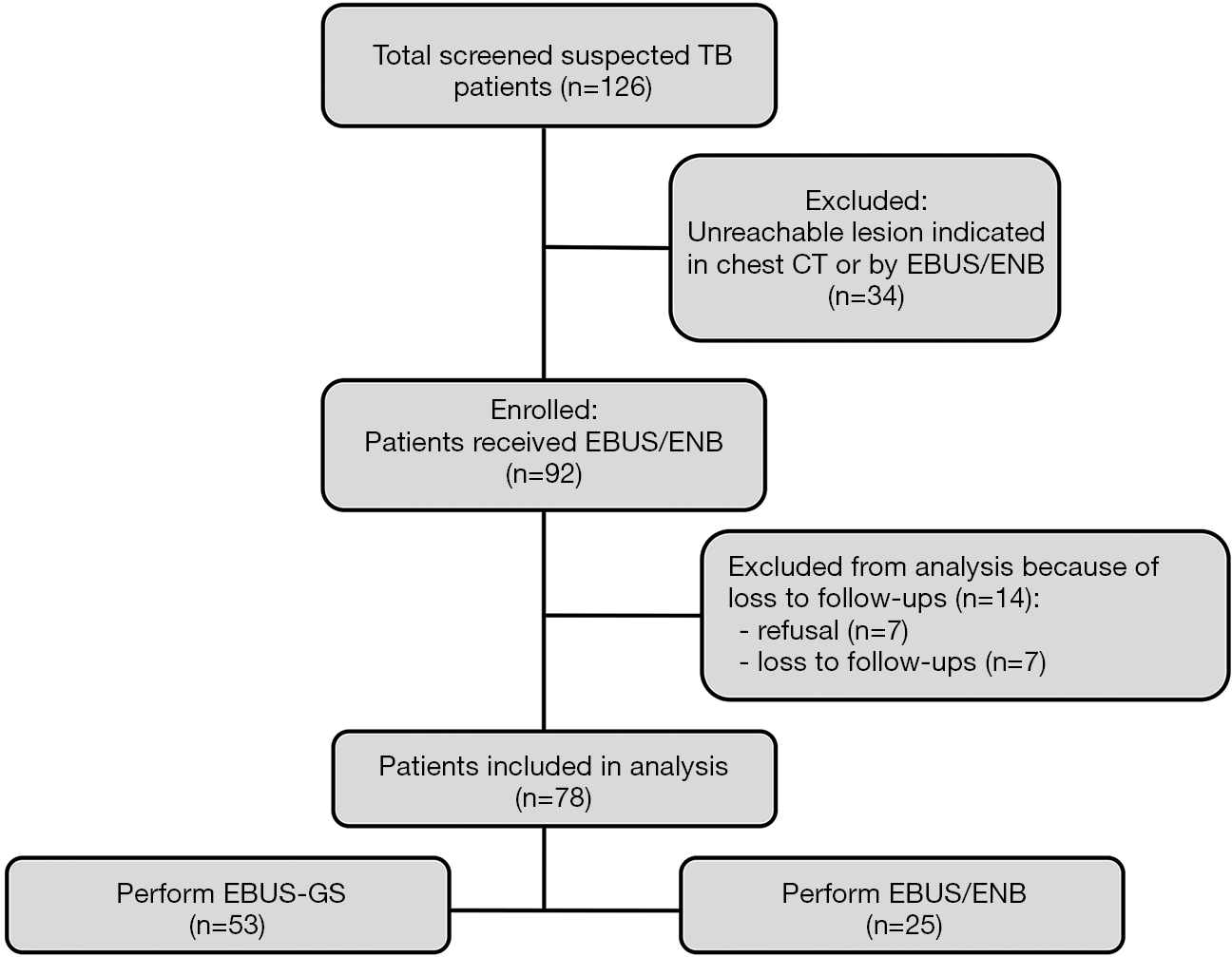 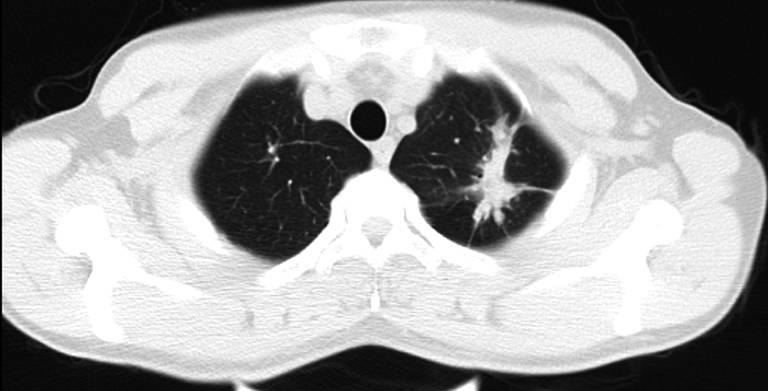 Figure 2 Chest CT scan of the patient showed the location and morphology of the lesion.

Inclusion criteria were as follows: (I) Negative sputum acid-fast bacilli smear and negative sputum molecular test (repeated three times); (II) pulmonary tuberculosis diagnosed at another hospital with no marked absorption of the lesion after at least two months of diagnostic anti-tuberculosis treatment; (III) unconventional lesion site and no signs of typical tuberculosis revealed by imaging studies; (IV) A method was selected (EBUS-GS alone, or EBUS-GS + ENB) based on the lesion site and the level and angle of the bronchus involved; and 5) Difficult cases cannot diagnosed through regular bronchoscopy or any other examinations showed.

Exclusion criteria were as follows: (I) patients cannot receive bronchoscopy due to contraindications; (II) diagnosed patients with confirmed acid-fast bacilli in sputum; and (III) patients’ lesions <1 cm, without bronchus sign, or cannot reached by ENB.

Patients were instructed to fast (no food or water) for at least six hours before bronchoscopy. Patients with hypertension were instructed to take hypotensive drugs, and patients with diabetes were instructed to skip a dose of hypoglycemic drugs or insulin. The bronchoscopy was performed with general anesthesia. Once in the operating theater, patients were placed in the supine position on the table. A peripheral venous access was established, and ECG, pulse oxygen saturation, and blood pressure were monitored. Sufentanil (0.4–0.6 µg/kg), propofol (1.5–2 mg/kg), and succinylcholine (1–1.5 mg/kg) were intravenously injected to induce general anesthesia. After 1 min, a laryngeal mask was placed on the patient (male: 5#, female: 4#). During navigation, mechanical ventilation was administered, and anesthesia was maintained with propofol (25–75 µg/kg/min) and succinylcholine (3–5 µg/kg/min). At the end of bronchoscopy, naloxone (0.2–0.4 mg) was administered, and the laryngeal mask was removed once the patient was completely awake. 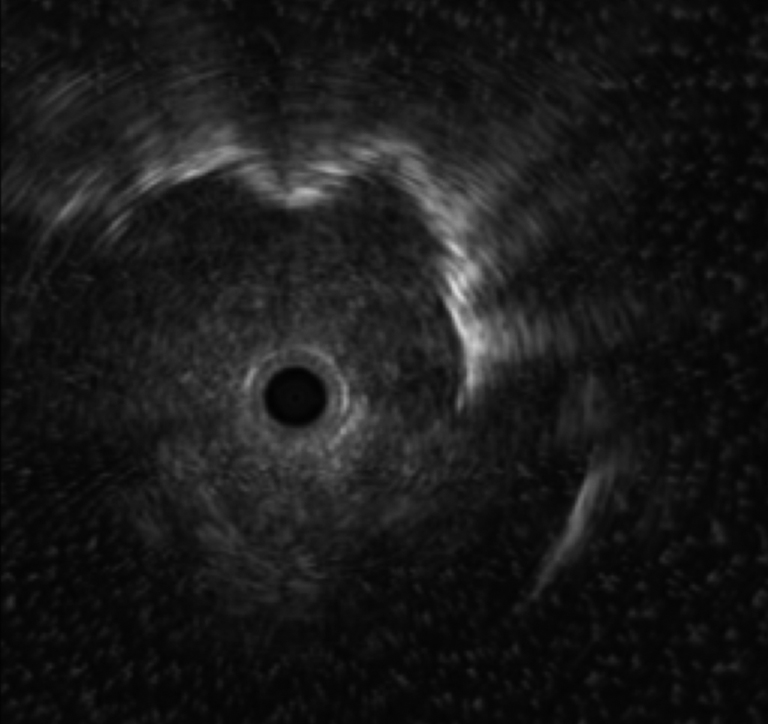 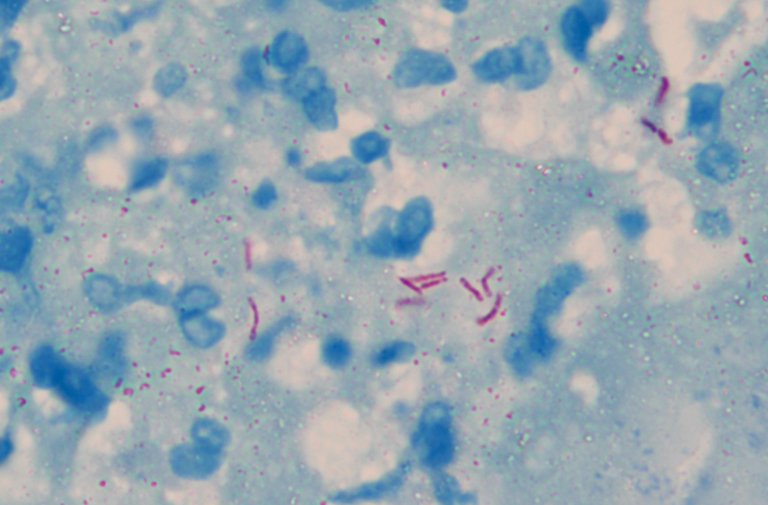 We examined a total of 78 patients with suspected pulmonary tuberculosis between June 2014 and March 2017, including 54 men and 24 women with an average age of 48±17 years. General information on the study population is presented in Table 1. Maximum diameter of the lesion is 29.1±14.5 mm. Laboratory tests and previous treatments are presented in Table 2. Finally, 44 patients were diagnosed with tuberculosis, 1 with nontuberculous Mycobacterial (NTM) lung disease, 15 with lung cancer, 15 with pulmonary infection, 1 with allergic bronchopulmonary aspergillosis (ABPA), and 2 with pneumoconiosis. A total of 25 tuberculosis patients (56.8%) were successfully diagnosed using EBUS-GS + ENB (Table 3). Among 78 cases, 53 cases received EBUS-GS, and then 36 cases were confirmed indicating a diagnostic rate of 67.9%, 25 cases received EBUS-GS combining with ENB, and 19 were diagnosed indicating a diagnostic rate of 76%. Nine of the patients with confirmed diagnoses were diagnosed by pathological examination, 4 by genetic analysis, 11 by positive smears, and 14 by positive cultures. Among all confirmed tuberculosis patients, positive rate of brushing forceps was 20.5% (9/44), biopsy 45.5% (20/44), lavage fluid smear and culture 36.4% (16/44), and transbronchial needle aspiration 40% (4/10). No complications such as pneumothorax, major bleeding, or infection were observed in this study. 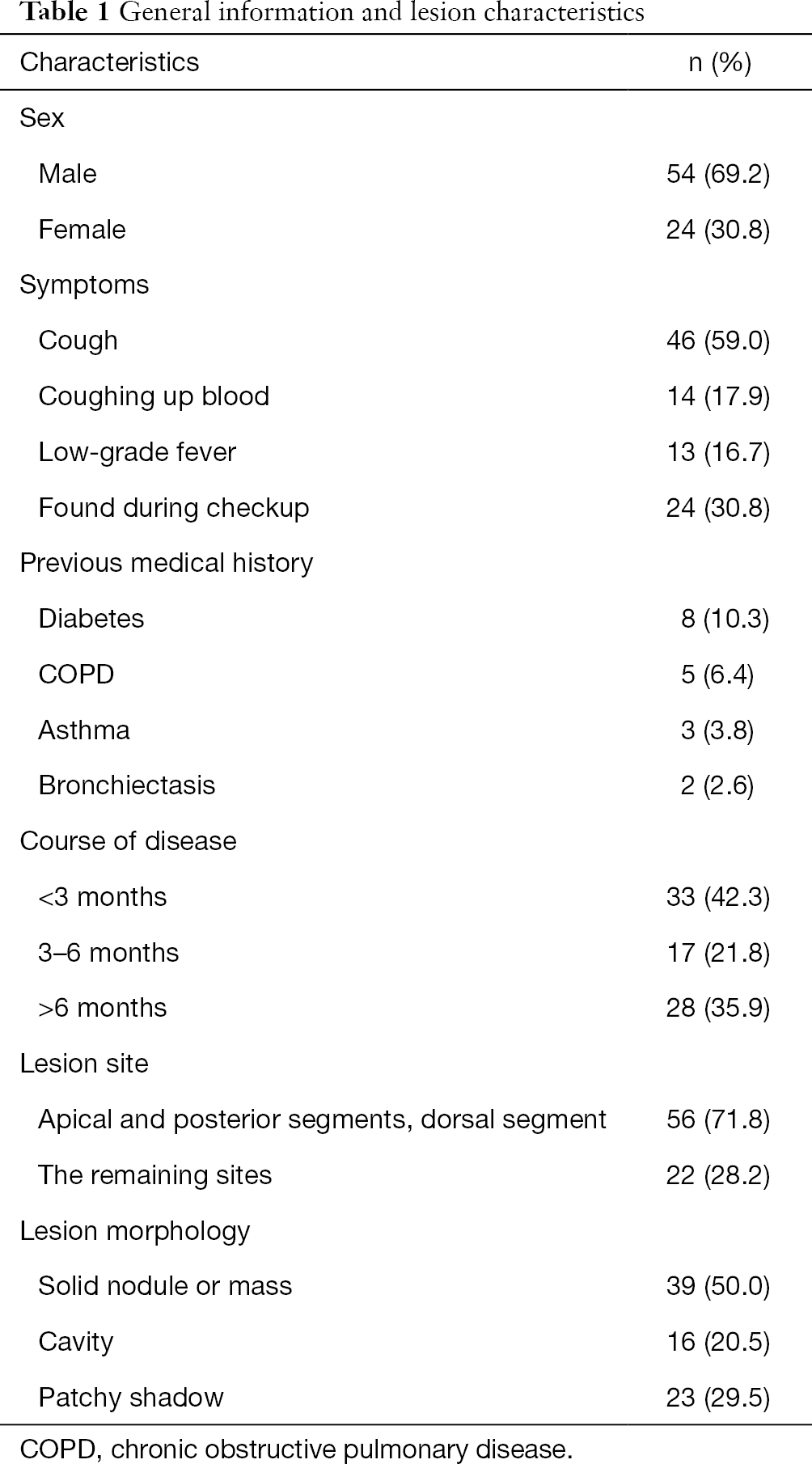 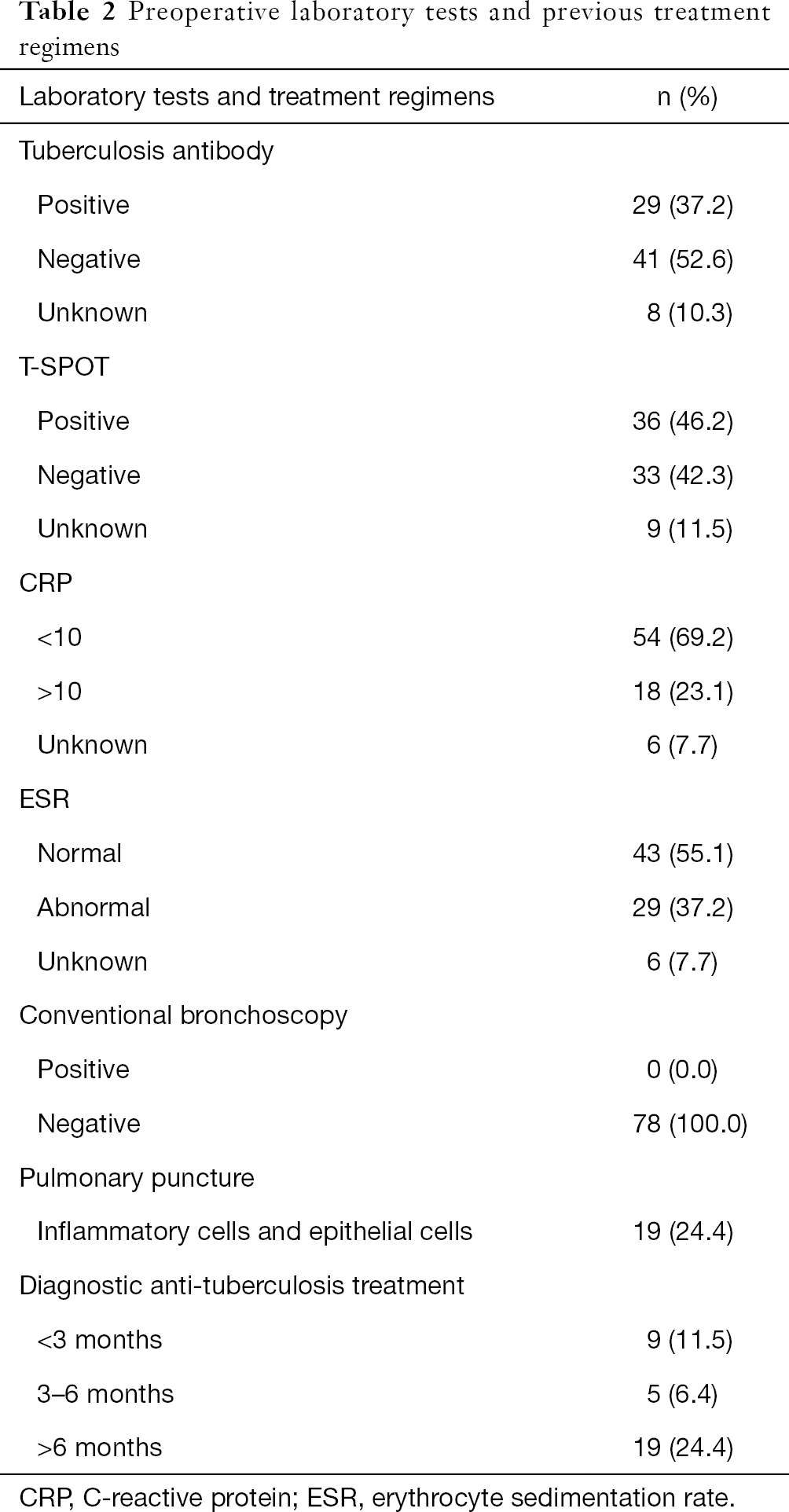 Clinical application of the endobronchial technique

Historically, respiratory specialists have relied on transbronchial lung biopsy (TBLB) to diagnose peripheral lung lesions, especially diffuse lesions. Given the increasing number of patients with peripheral pulmonary nodules in China, physicians have attempted lung aspiration or biopsy under the guidance of fluoroscopy, but the diagnostic rate is low (9). EBUS-GS, introduced into China in 2010, uses a ring-shaped ultrasound probe that can access bronchioles via bronchoscope clamps to observe the bronchus with ultrasound, locate the lesion, and collect a sample through the guide sheath. This technique is especially advantageous for peripheral lesions near the mediastinum (10). The technique is performed through natural channels, thereby minimizing damage and pneumothorax. Ultrasound images confirm the location of vessels around the lesion, which helps prevent major bleeding (11).

EBUS-GS cannot access distal bronchi and is inflexible. As a result, it cannot locate certain distal lesions or lesions with sharp bronchial angles. But, since first introduced into clinical practice in the US in 2005, ENB has contributed to major breakthroughs in locating and diagnosing small peripheral pulmonary nodules (12). The SuperDimension inReach system uses the ENB technique for minimally invasive exploration of deep lung lesions and mediastinal lymph nodes. The system has sensors at the front of the catheter that send signals to three magnetic nodes on the patient’s chest and the electromagnetic positioning plate under the patient's body, thus acting like a GPS navigation system in the patient’s lungs. The system guides the biopsy device to suspected sites to diagnose suspected target tissue.

ENB has a high diagnostic rate for both benign and malignant peripheral pulmonary nodules (13). When used with EBUS, ENB can confirm the lesion in real time, further improving the diagnostic rate (14), minimizing bleeding, and reducing patient and operator exposure to X-rays. Thus, this combination represents a minimally invasive, effective, and safe endobronchial diagnostic technique.

It has been difficult to diagnose and treat atypical bacteriological-negative pulmonary tuberculosis because of the lack of "gold standards" for diagnosis. Such cases are typically diagnosed based on imaging studies, tuberculosis antibodies, and the T-SPOT assay (15). Invasive exams, such as bronchoscopy and percutaneous pulmonary puncture, may improve the detection rate of Mycobacterium tuberculosis (16-18). In recent years, interferon-γ release assays and rapid molecular detection assays have greatly advanced the diagnosis of pulmonary tuberculosis. Diagnostic anti-tuberculosis treatment also plays an important role in the diagnosis and treatment of bacteriologically-negative tuberculosis and is thus widely used in clinical practice. However, It is important that histopathological examination is routinely introduced to confirm tuberculosis in unconfirmed cases using EBUS-GS or ENB, especially in patients who do not respond to diagnostic anti-tuberculosis treatment.

At present, most foreign clinical studies on peripheral endobronchial techniques focus on malignant diseases and have demonstrated the effectiveness of EBUS and ENB use for the diagnosis of malignant nodules. Our previous case report demonstrated that ENB has specific clinical value in the diagnosis of bacteriologically-negative pulmonary tuberculosis (19). In this study, all 78 patients were suspected to have pulmonary tuberculosis on the basis of symptoms, laboratory tests, and chest imaging studies. Of these, 33 patients received 14 days to 24 months of diagnostic anti-tuberculosis treatment, and repeated sputum acid-fast bacilli smears and cultures were negative. Conventional bronchoscopy and pulmonary puncture, however, could not confirm the diagnosis. In 71.8% of the patients, the lesion was located in the posterior, apical, or dorsal segment of the upper lobes, was inaccessible by conventional bronchoscopy, and a second percutaneous pulmonary puncture would have been risky or difficult to perform and had a low positive rate. When using EBUS plus ENB (brushing, biopsy, irrigation), however, 70.5% of the cases were pathologically or bacteriologically confirmed, and complications such as pneumothorax did not occur. Our results demonstrate that EBUS plus ENB is advantageous for enabling lesion access and successful biopsy and diagnosis with various detection methods. Among patients with a final diagnosis of pulmonary tuberculosis, 56.8% were confirmed with EBUS plus ENB. The diagnostic rate of this combined technique was relatively low for malignant lesions but enabled a breakthrough for benign lesions, indicating that EBUS plus ENB is a promising technique for the differential diagnosis of atypical bacteriological-negative tuberculosis.

Advantage and dis advantage of the endobronchial technique in tuberculosis diagnosis

Studies have demonstrated the feasibility of electromagnetic navigation and EBUS (20). With constant improvements and upgrades, the electromagnetic navigation technique is expected to facilitate the identification of even smaller lesions and be more widely used in the future. The cost of EBUS-GS/ENB is 15000 CNY in China, which is more expensive than regular bronchoscopy (400 CNY) together with laboratory test (1,000 CNY), while the cost of thoracoscopy is about 40,000 CNY. In this study, the diagnostic rate of EBUS-GS/ENB was 75%, while the diagnostic rate of thoracoscopy was 100% (21). Though the diagnostic rate of thoracoscopy is high, it has high cost, big invasiveness, and many complications. EBUS-GS/ENB is a method worthy recommendation. However, these techniques are not yet mature and require further validation and investigation to confirm their clinical value in the diagnosis and treatment of tuberculosis.

There are some limitations in this study. This is an observational study, describing the application of EBUS-GS/ENB in culture negative tuberculosis patients. However, there was no control group, and the method was not compared with other methods. In the future, comparison will be conducted between EBUS-GS/ENB and other methods such as thoracoscopy and traditional diagnostic methods in terms of diagnostic value and cost-effective, aiming to reveal the application value of EBUS-GS/ENB in culture negative tuberculosis patients more deeply and comprehensively. Due to the lack of relative international guidelines and publications, the choice of EBUS-GS/ENB is relatively subjective. There is still a lack of unified and specific standard. In the future, detailed indications of EBUS-GS and BUS-GS/ENB can be concluded through large sample studied, to make BUS-GS/ENB more reasonable and more effectively used.

In conclusion, the introduction of EBUS and ENB in China has provided a new direction for the diagnosis of atypical bacteriological-negative tuberculosis, as the techniques are less invasive and less expensive than thoracoscopy.

Funding: This study was supported by the Shanghai Pujiang Program (16PJD041) and Clinical Research Plan of SHDC (16CR1028B).

Ethical Statement: The authors are accountable for all aspects of the work in ensuring that questions related to the accuracy or integrity of any part of the work are appropriately investigated and resolved. The study was in accordance with the amended Declaration of Helsinki and approved by the Ethical Committee of Shanghai Pulmonary Hospital (18Q016NJ). Patients and their families were informed about the study and signed informed consent forms.