Growing evidence indicates that IL-37, a new inhibitor of both innate and adaptive immunity, plays a role in tumor (1). As the 7th member of the IL-1 family (IL1F7), IL-37 is produced as a precursor and then cleaved into mature form in the cytoplasm. IL-37 has five isoforms, IL-37a, b, c, d and e, which encodes 157 to 218 residues. IL-37b is the biggest isoform and has been identified as a functional gene to inhibit inflammation in many studies (2,3). In the present study, IL-37 means IL-37b isoform. IL-37 can be widely expressed in lymph node, thymus, bone marrow, and other tissues (3). Recent studies suggested an important role of IL-37 in tumor, such as fibrosarcoma (4), liver cancer (5,6), renal cancer (7), lung cancer (8,9). Gao et al. found the development of tumor was significantly inhibited by a single injection of Ad IL-37b, and many injections could completely inhibit fibrosarcoma development (4). Zhao et al. reported IL-37 had lower expression in hepatic cancer and was related to the infiltrating density with CD57 + NK cells (6). In non-small lung cancer tissues, the expression of IL-37 was significantly reduced, and the IL-37 expression levels were associated with cancer status, TNM phase, and poor prognosis (9). Jiang et al. identified IL-37 significantly inhibited the renal cancer cell invasion and proliferation, and promoted cell apoptosis (7). In our previous study, IL-37 inhibited cervical cancer (CC) cell proliferation, invasion and apoptosis, but molecules involved in these processes were less well understood (10,11). Thus, this study aimed to investigate the effects of IL-37 on CC cell invasion and the relevant genes.

CC is the fifth leading cause of cancer death in women (12). About 266,000 women die of it every year (13). Understanding the molecular pathways and genes which affect the CC progression will help improve the treatment and reduce the mortality. Runt related transcription factor 2 (RUNX2) is a member of the RUNX family whose function in CC is still not clear. RUNX2 is a key regulator of normal bone development, homeostasis and remodeling (14-16). Further, mounting evidence showed that RUNX2 activated genes associated with tumor genesis and metastasis, and promote tumor cell invasion in cancers, such as breast cancer (17-19), prostate cancer (20,21), thyroid cancers (22), osteosarcoma (23-25), and melanoma (26). Our preliminary study experiment found that IL-37 could inhibit human CC cell invasion and influence the expression of RUNX family. In the present study, we aim to investigate the role of IL-37 and the correlation of IL-37 and RUNX2 in CC cells. To the best of our knowledge, it is the first time to report the correlation of IL-37 and RUNX2 expression in CC. The results will be helpful to understand the biological function of IL-37 and to provide new potential molecule for CC therapy.

Human CC cell lines, Siha and C33A were purchased from the China Center for Type Culture Collection (CCTCC) (Wuhan, China) as previously described (10,26). The cells were maintained in DMEM medium containing 10% fetal bovine serum (FBS) purchased from Invitrogen, supplementary with 2.0 mmol/L L-glutamine, 50 U penicillin and 50 µg/mL streptomycin. All cells were routinely cultured in a 5% CO2 atmosphere at 37 °C. The empty vector pIRES2-EGFP was purchased from Shanghai Geneary Biotech Co., Ltd. (Shanghai, China). The expression plasmid pIRES2-EGFP/IL-37 which expressed IL-37 (NM_014439) in eukaryotic cells had been described in our previous study (10). The expression plasmid pGV230-RUNX2 which expressed RUNX2 (NM_001015051) in eukaryotic cells was cloned into XhoI/KpnI clone sites and sequenced by Genechem Co., Ltd, China.

For transfection, cells were plated onto 6-well plates (Corning, USA) at a density of 2.5×105 cells per well. Cells were transfected with Hilymax (Dojindo, Shanghai, China) reagents in serum- and antibiotic-free OptiMEM (Gibco-BRL, USA) according to the manufacturer’s instructions. The ratio of Hilymax (µL) to DNA (µg) was 15:3.

Cells were lysed in RIPA buffer (Beyotime, Shanghai, China) and the lysates were collected into tubes and centrifuged at 12,000 g for 20 min at 4 °C. The supernatants were collected and protein concentration was quantified with BCA Protein Quantitative Kit (Beyotime, Shanghai, China). Then, western blotting was performed according to the manuals. Equal amount of protein (200 µg) was separated on 10% SDS-PAGE and transferred to PVDF membranes (Millipore, Billerica, MA, USA). The membrane were then blocked with 5% non-fat milk for 1 h and incubated overnight at 4 °C with rabbit anti-human antibodies against IL-37 (Abcam, Cambridge, MA, USA, ab116282; diluted 1:1,000), RUNX2 (Abcam, Cambridge, MA, USA, ab23981; diluted 1:1,000), and GAPDH (Goodhere Technology, Hangzhou, China; AB-P-R001; diluted 1:500), respectively. In the next day, the membrane was-incubated with HRP-conjugated secondary antibody (Beyotime, Shanghai, China; diluted 1:1,000) for 1 h and detected by enhanced chemiluminescence (ECL). Reactive bands were revealed with Immobilon Western Chemiluminescent kit (WBKLS0100, Millipore, USA) by Cobas e601 automatic chemiluminescence image analysis system (Roche, USA). Each experiment was performed in triplicate.

Cell invasion ability was detected by transwell assay as described previously (10). The upper chambers were pre-coated with Matrigel (BD Bioscience, San Jose, CA, USA). Cells (6.0×104 cells /well) were placed into the upper chambers (BD Bioscience, San Jose, CA, USA) containing 10% FBS. The lower chambers were filled with RPMI-1640 with 20% FBS. After incubation for 48 h for Siha or C33A cells at 37 °C, cells on the lower surface of the membranes were fixed and stained with 0.1% crystal violet, and five random fields of vision were selected to be counted under a light microscope (Olympus, 200×). Each experiment was performed in triplicate.

Statistical analyses were performed using SPSS 15.0 (http://spss.en.softonic.com/). Independent sample t-test was used for analyzing two groups and one-way analysis of variance (ANOVA) was used for examining multiple groups. Rates were compared using the Chi-square test. The level of statistical significance was set at P<0.05 or P<0.01. 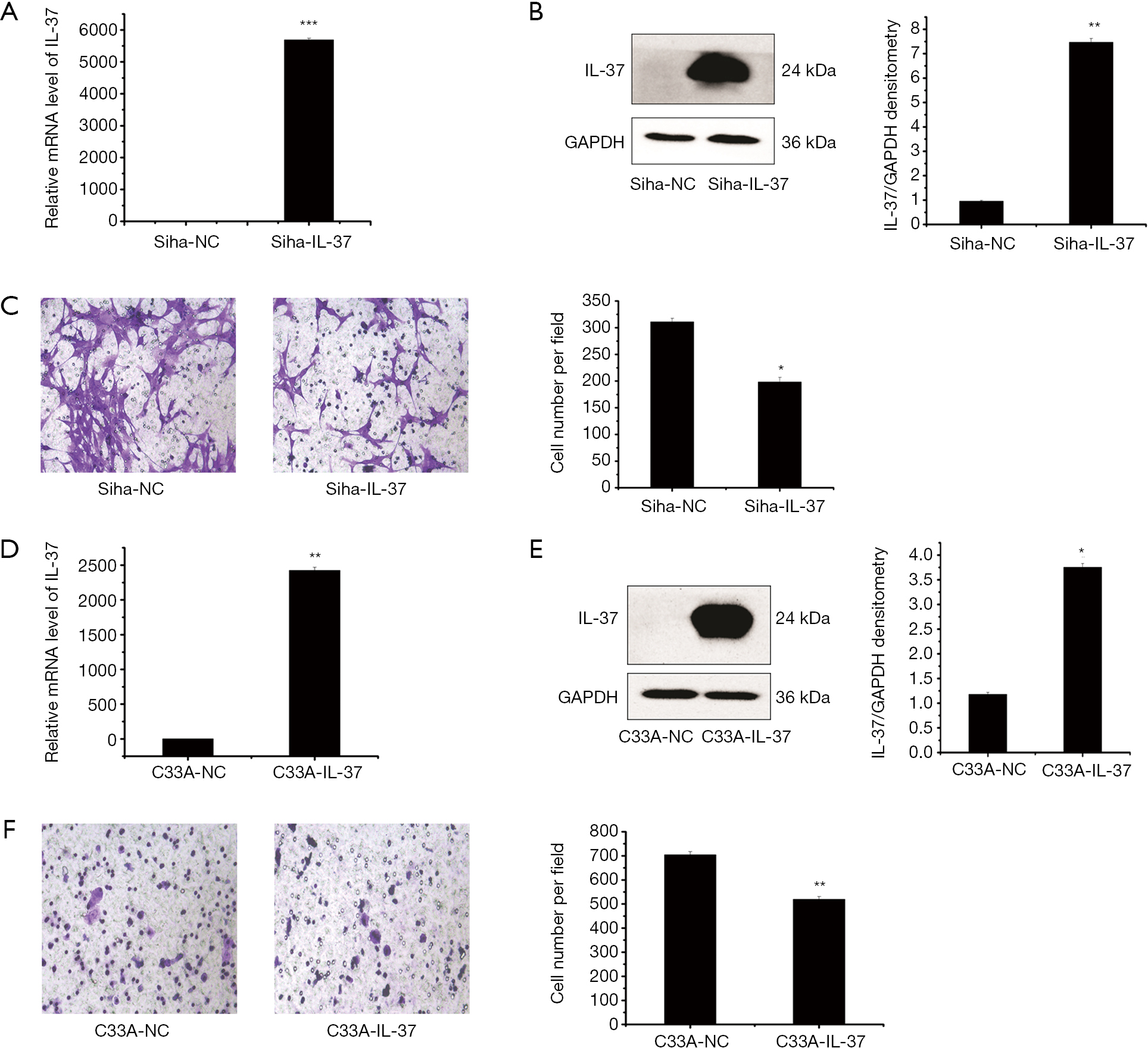 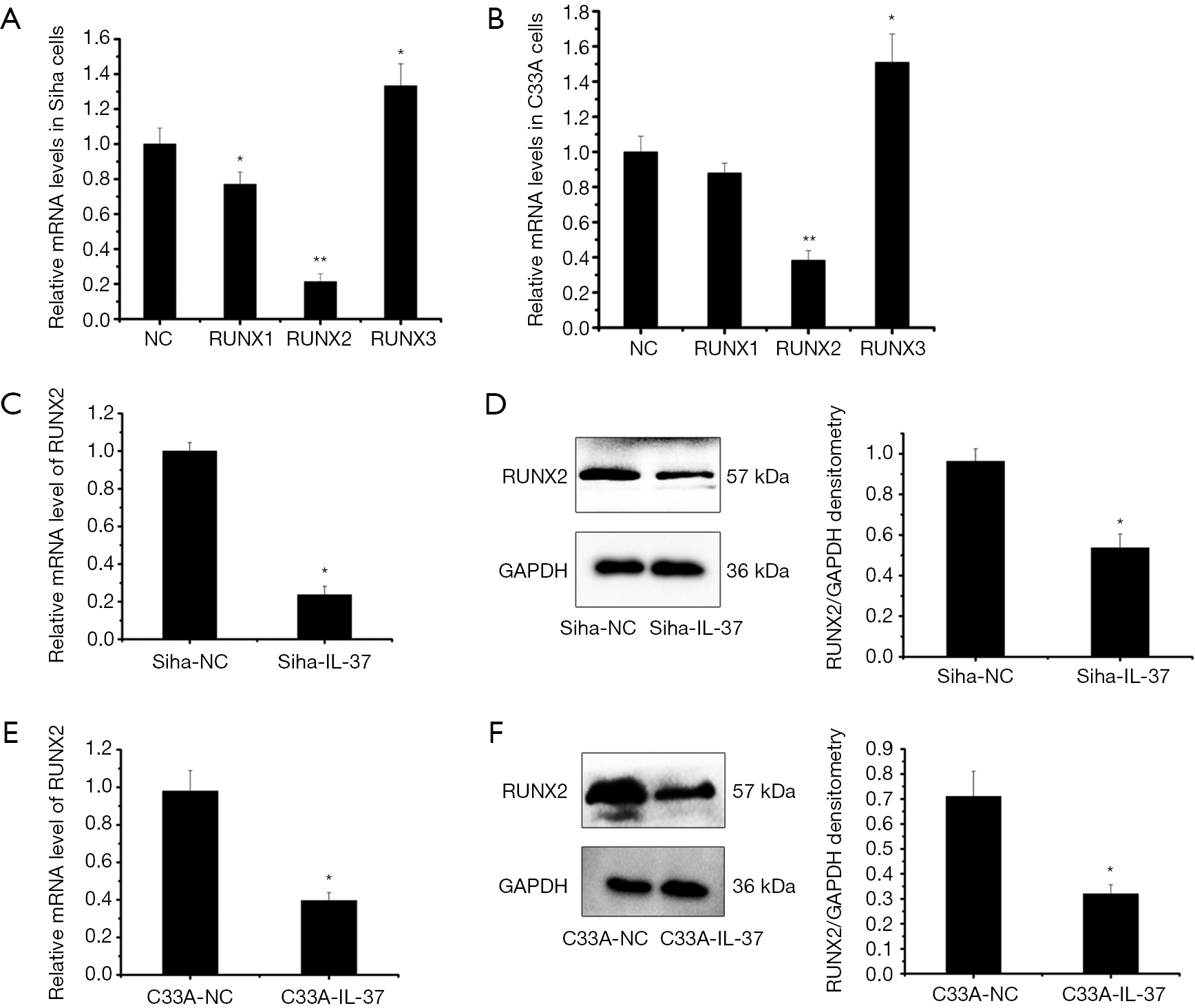 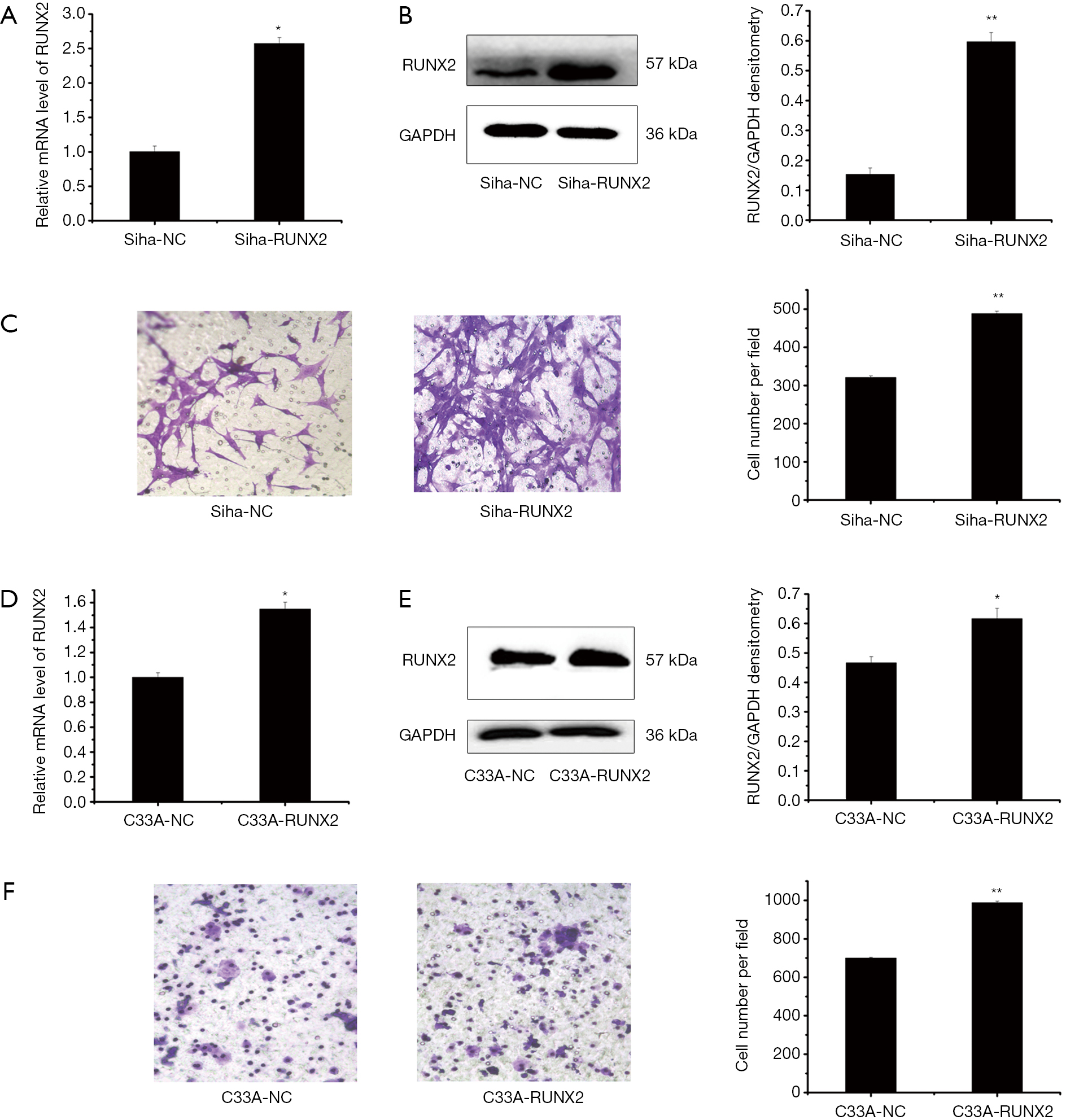 In this study, the effect of IL-37 on cell invasion was investigated. We found IL-37 played an inhibitory role in CC cell invasion, which suggested IL-37 might work as an anti-tumor molecule in Siha and C33A cells. This result was consistent with many previous studies. In fibrosarcoma, IL-37 showed significant tumor suppression in mice (4). In renal cell carcinoma, IL-37 expression was observed to inhibit cancer cell proliferation and invasion through IL-6/Stat3 pathway (7). In colon cancer cells, overexpression of IL-37 inhibited cell migration and invasion by suppressing β-catenin (29). These studies implicated the inhibition ability of IL-37 on tumor cells.

Additionally, IL-37 also had inhibition ability on tumor microenvironment. In hepatocellular carcinoma, IL-37 expression was decreased, but increased intratumoral expression of IL-37 proportionally positively correlated with the overall survival and disease-free survival (6). The mechanism of the antitumor effect of IL-37 is activating immunity in the tumor microenvironment through the regulation of NK cells. In breast cancer, IL-37 was up-regulated and showed the antitumor effects by inﬂuencing the tumor microenvironment (30). In non-small lung cancer, Ge et al. found IL-37 expression was up-regulated in non-tumor tissues but down-regulated in lung cancer tissues, they further suggested IL-37 repression of the development of lung cancer may be through tumor angiogenesis inhibition (9). However, in ovarian cancer, the authors found high serum IL-37 levels were associated with an unfavorable prognosis of human epithelial ovarian cancer (EOC) patients (31). More data is needed and the relationship between IL-37 and CC microenvironments may be a good direction in future studies.

RUNX2 was involved in the inhibition of cell invasion by IL-37, no similar report was found before. IL-37 gene was transfected into cancer cells and decreased the expression of mRNA and protein of RUNX2, and RUNX2 overexpression can rescue the cell invasion reduced by IL-37 in CC cells. All these results indicated RUNX2 was involved in the anti-tumor processes of IL-37 induced. Mature IL-37 can translocate into the nucleus and activate many transcriptional factors. Our previous study had proved IL-37 could regulate STAT3 signaling in CC cells HeLa and C33A. Here, we also showed the participation of RUNX2 in the inhibited cell invasion by IL-37. To our knowledge, the interaction between the two proteins was reported for the first time. This result helps to further understand the molecular network associated with IL-37 in CC.

In addition, due to more and more stringent ethical review, we could not collect enough human biopsies to detect the expression of those genes. Thus, the present version of this study focused on the cell invasion in cancer cell lines in vitro and the results did show that RUNX2 promoted cancer cell invasion and was involved in the cell invasion inhibition by IL-37 in vitro. The preliminary results showed that IL-37 up regulated RUNX3 which might be a tumor suppressor for CC (39), suggesting that RUNX3 up regulation might also be related to the function of IL-37. However, RUNX3 was not the mostly changed gene among the RUNX family and was not the main clue for this study, we hope to further research it in next study.

In the present study, C33a cells are HPV-negative and SiHa cells are HPV16-positive which is the most important HPV subtype in HPV infection. The inhibitory ability of IL-37 on SiHa cells seemed a little weaker than that on C33a cells. The data in the HPV-negative and HPV-positive cell lines was different, the difference was not so significant here. HPV16 E6 gene is one of the main oncogene for cervical carcinogenesis which is mainly related to P53 pathway. Two studies speculated that IL-37 might regulate P53 (40,41) which mediated HPV E6-induced carcinogenesis. Thus, IL-37 might play a role in HPV-induced pathological process by regulating P53, which might be a potential idea for the next study.

In conclusion, the present study demonstrates that IL-37 can significantly inhibit cell invasion in CC cells Siha and C33A. RUNX2 has an opposite effect. The anti-tumor effect of IL-37 is, at least in part, via the suppression of RUNX2 in CC cells.

Ethical Statement: This study didn’t include any human tissues or animal experiments; thus, no ethics approval was needed. The authors are accountable for all aspects of the work in ensuring that questions related to the accuracy or integrity of any part of the work are appropriately investigated and resolved.