Traditionally, due to the distance between the primary lesions and metastases, the surgical strategy for CRLM, especially for sigmoid colon or rectal cancer, requires two incision sites (an inferior abdominal midline incision and a right subcostal incision) (16,17), or even a staged operation (18,19). At our center, with the use of laparoscopy, we designed a novel single-incision surgical approach for simultaneous resection, which requires only a single right subcostal incision. In this prospective cohort study, the clinical data of 42 patients with sigmoid colon or rectal cancer and liver metastases who underwent simultaneous resection of both lesions at our center between January 2012 and December 2016 were collected. By comparing the patients’ clinical characteristics and postoperative outcomes, we managed to compare the safety and feasibility between the single-incision and dual-incision surgical approaches and discuss the effects of the incision choice on postoperative outcomes and complications.

With the approval of the Institutional Review Board, 85 patients with sigmoid colon or rectal cancer and liver metastases who were treated with surgery at the Abdominal Surgery Department, Cancer Hospital of the Chinese Academy of Medical Science, Beijing, China, between January 2012 and December 2016 were included in this retrospective study. All 42 patients received an electronic colonoscope examination and underwent a biopsy, which confirmed that the primary tumors were adenocarcinoma of the sigmoid colon or rectum. Diagnosis of liver metastases was based on imaging results by hepatic magnetic resonance imaging (MRI), which was verified by two or more radiologists. Furthermore, the postoperative pathological results confirmed the diagnosis of colorectal cancer with liver metastases.

The indications of a laparoscopic hepatectomy include a solitary lesion located in the peripheral segments of the liver and not adjacent to major vasculature, and multiple lesions that can be resected with a single anatomic hepatectomy with a clear margin. The indications of open hepatectomy include a solitary lesion adjacent to major vasculature that prevents negative margin or safe manipulation, a large solitary lesion that cannot obtain margin-free resection or safe manipulation, and multiple liver metastases with bilobar distribution and complicated manipulation. Whether it is laparoscopic or open hepatectomy, we need to reserve an adequate volume of future liver remnant for a successful recovery after surgery. 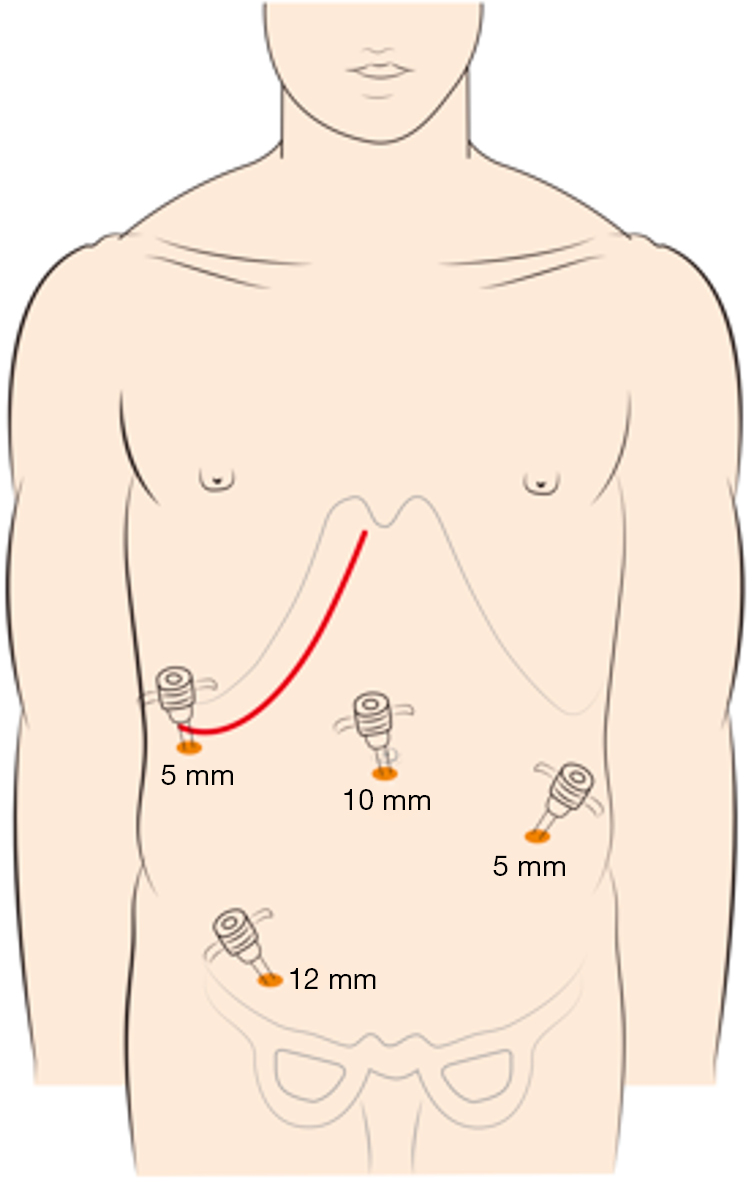 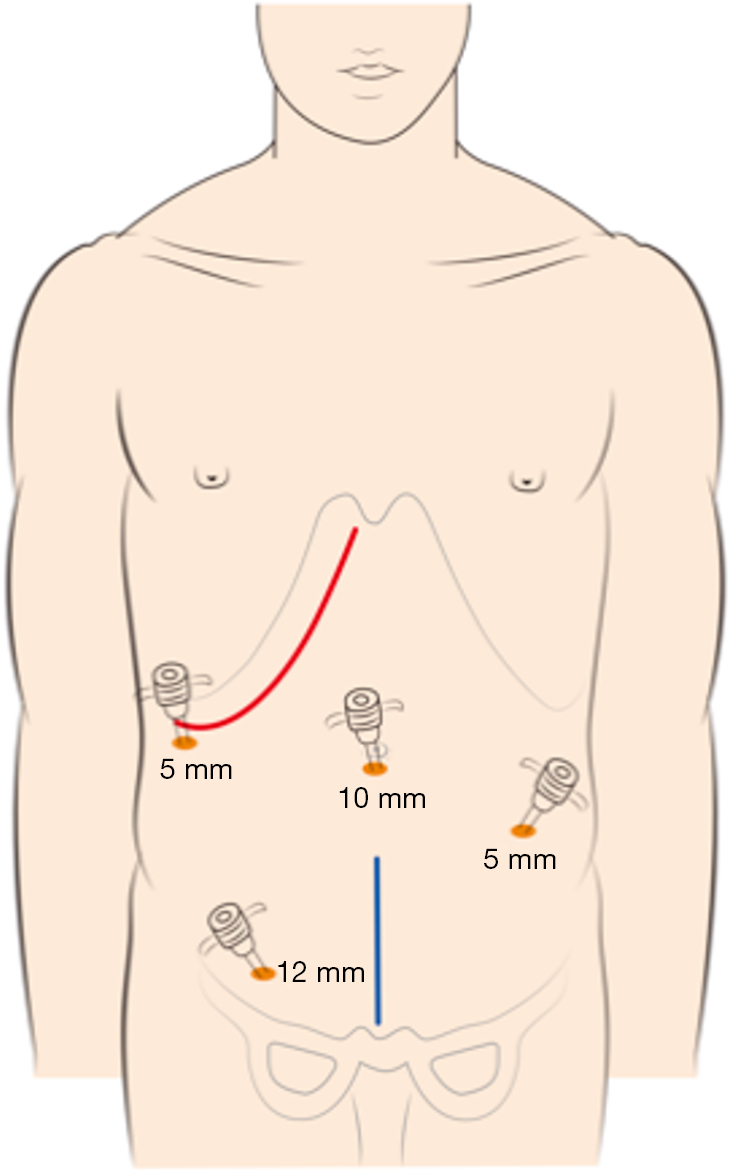 For each patient, the intraoperative and postoperative outcomes were evaluated, including operation time, total hospital stay, postoperative hospital stay, intraoperative blood loss, time of removal of drainage tubes, and postoperative complications. Surgical outcomes between the single-incision group and dual-incision group were compared using the χ2 test for enumeration data and the Mann-Whitney U test for measurement data. Statistical significance was defined as P<0.05. All of the analyses were performed using the statistical software SPSS 21.0 (SPSS Inc., Chicago, IL, USA). 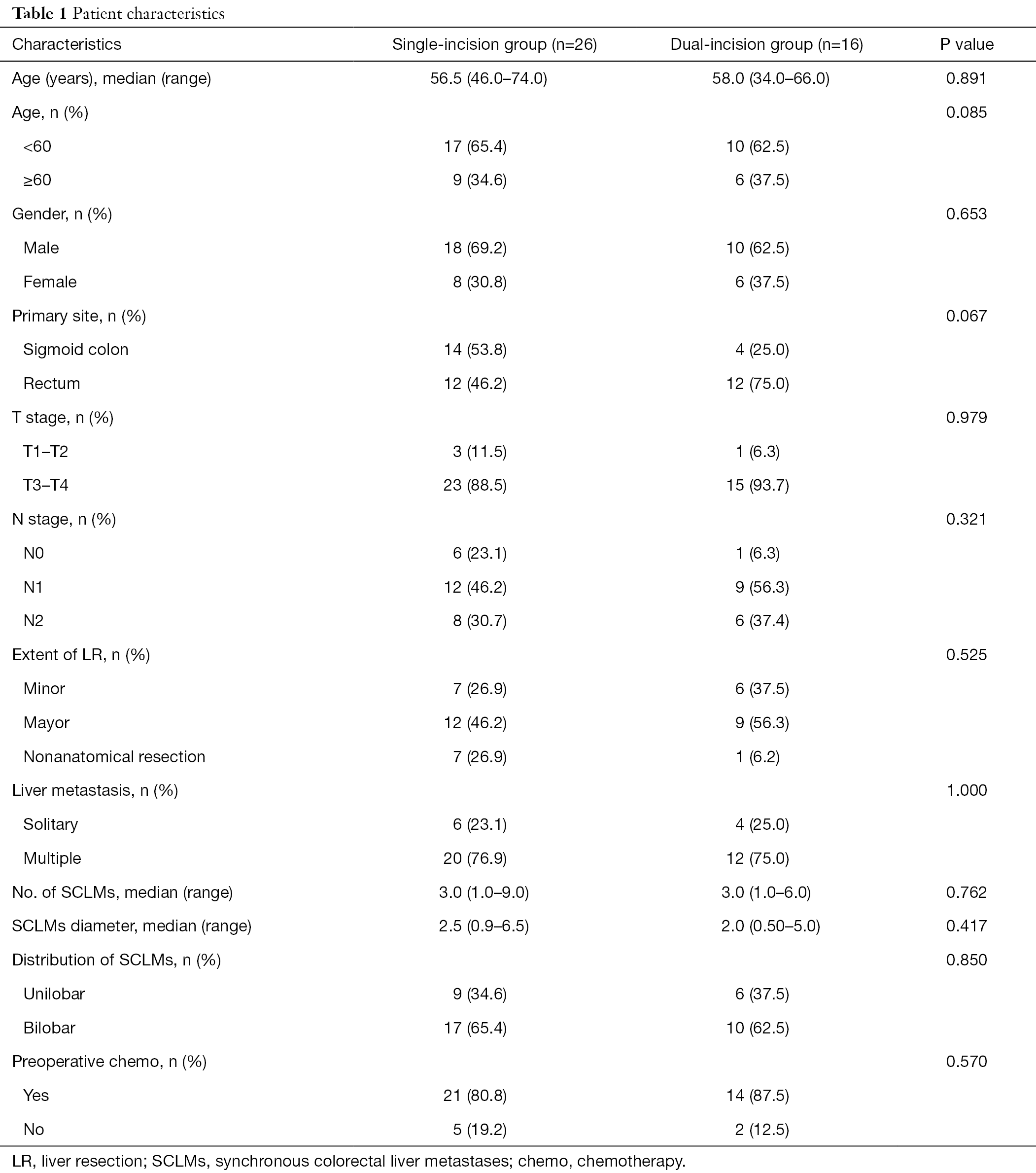 In this study, 18 (42.3%) patients had cancer that primarily originated from the sigmoid colon, and the single-incision group had a larger number of patients with primary colon cancer than did the dual-incision group, but there was no noticeable difference (P>0.05). There was no significant difference in the condition of local tumor node (TN) stage between the two groups (P>0.05).

The median number of liver metastases was 3.0 and 3.0, with a median size of CRLM of 2.8 and 2.0 cm in the single-incision group and the dual-incision group, respectively (P>0.05). We used Couinaud’ classification for the definition of liver segments. Major hepatectomy was defined as resection of more than two liver segments. The extent of liver resection and the distribution of liver metastases were comparable between the two groups (P>0.05).

Twenty-six patients underwent single-incision surgery, while the other 16 underwent dual-incision surgery. There was no significant difference between the two groups regarding total hospital stay, postoperative hospital stay, volume of intraoperative blood loss, time of postoperative drainage tube extraction (including gastric tube, urinary catheter, pelvic and peritoneal cavity drainage tube), and the time to the first postoperative bowel movement (P>0.05) (Table 2). However, concerning the operation time, the duration was shorter in the single-incision group than in the dual-incision group (328.0 vs. 420.0 min, respectively; P=0.006). 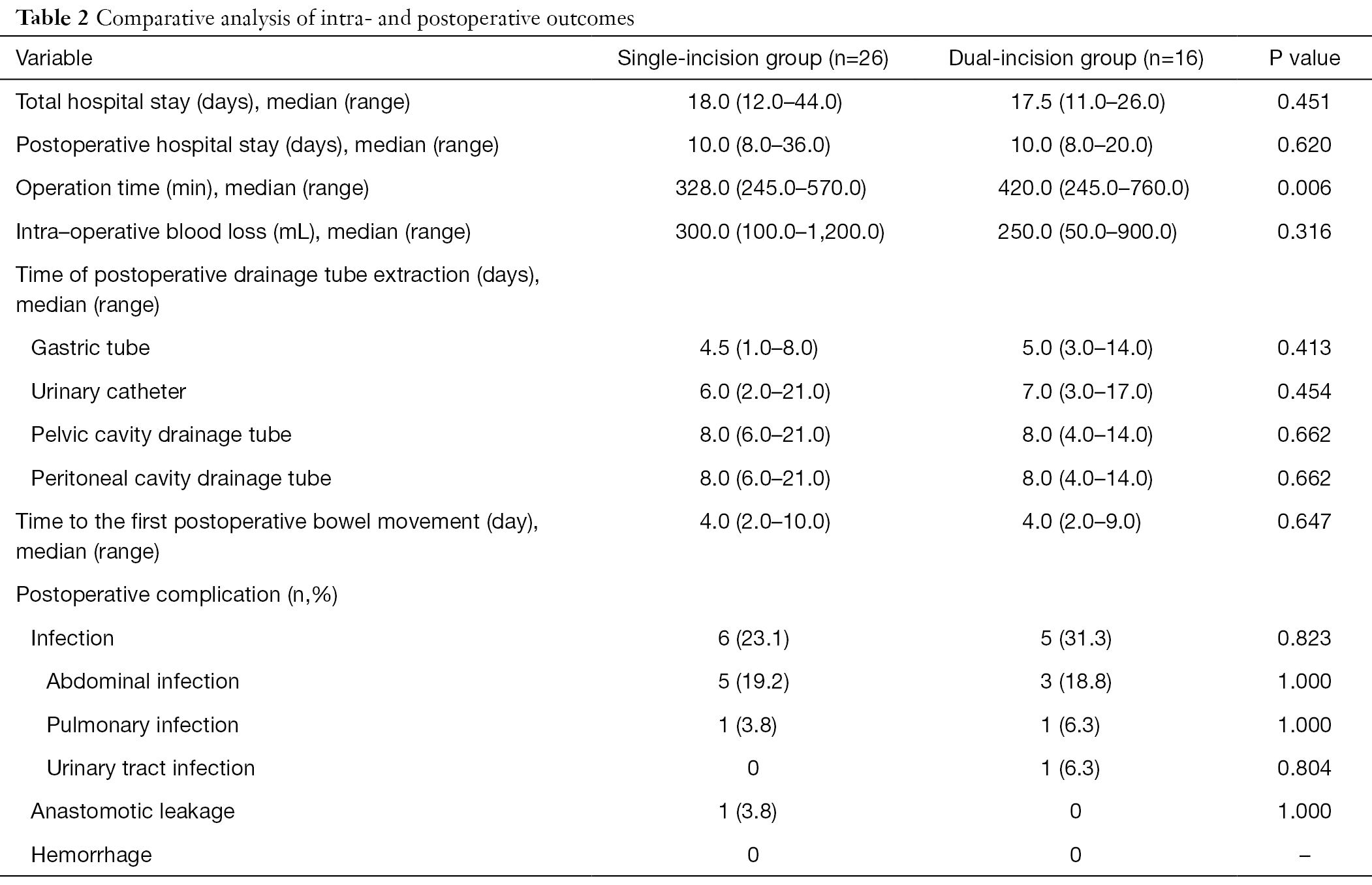 Although the surgical strategies for colorectal cancer liver metastases are debated, an increasing number of studies has demonstrated that compared to a staged resection, a simultaneous resection can obviate a second operation, shorten operation time, reduce intraoperative blood loss, shorten postoperative hospital stay, and reduce hospital costs. Also, there is no significant difference between the two surgical strategies regarding short-term and long-term outcomes (10,11,20,21). Our experiences from the clinical practice at our center attest to safety and efficacy of treating CRLM patients using simultaneous surgical resection (13,14).

Moreover, the ideal surgical procedure and incision approach for the simultaneous resection of CRLM, in which various types of incisions have been applied, is still controversial. When choosing an ideal surgical incision approach, the following principles should be considered: providing adequate exposure, minimally interfering with abdominal wall anatomy and function, rapidly entering the peritoneal cavity, and fulfilling a cosmetic result. The midline and paramedian incisions are the most common incision approaches applied in colorectal surgery and entail less blood loss and no muscle damage or nerve injury. However, the right subcostal incision is also used in colorectal surgery (22). In liver surgery, the Kocher subcostal incision, i.e., the right subcostal oblique incision, is often used, which has the advantages of hepatic mobilization and vascular control. Considering the needs of both colorectal and liver resection, the extended midline incision and lower midline plus right subcostal incision were the most commonly used, while other types of incision approaches have also been innovated. For instance, Hsu et al. (23) report a type of reversed L-shaped incision that was used for right hemicolectomy combined with liver resection. However, with regards to simultaneous the resection of sigmoid colon or rectal cancer with synchronous liver metastases, there were few improvements in the incision approach.

At our center, for patients with sigmoid colon or rectal cancer and CRLM and for whom removing liver metastases was infeasible, we used a single-incision approach, which was the right subcostal oblique incision. Our study included 42 patients with sigmoid colon or rectal cancer and CRLM, of whom 26 underwent a single-incision approach, and 16 underwent a dual-incision approach. We compared hospitalization time, postoperative hospitalization time, operation time, intraoperative blood loss, time of postoperative drainage tube extraction, time to the first postoperative bowel movement, and postoperative complications between the two groups, and the only significant difference was the operation time. The median duration of operating time in the single-incision and dual-incision groups was 328.0 and 420.0 min, respectively (P=0.006). In dual-incision group, after radical resection of primary lesions and intestinal tract reconstruction by laparoscopic approach and laparotomy thorough the midline incision of the inferior abdomen, we re-disinfected and re-laid sterile sheets for patients before liver metastases resection. Therefore, the process of re-disinfection and re-laying sterile sheets, and the additional midline incision of the inferior abdomen and its closure increased the operation time. Few postoperative complications occurred in either group. Postoperative infection is the most worrisome issue in simultaneous resection due to intestinal lumen exposure. The rate of infection in both groups was similar (26.9% vs. 31.3%, P>0.05). The only instance of anastomotic leakage occurred in the single-incision group, and there was no difference in the rate of anastomotic leakage between the two groups.

Regarding the single-incision operative approach, the most significant concern is the ability to remove sigmoid or rectal lesions successfully. During the single-incision operation, we first disconnected the relevant arteries and veins, isolated the mesentery, stripped the intestine, and disconnected the intestinal segment distal to the lesion with the assistance of laparoscopy. Therefore, only the disconnection of the intestinal segment proximal to the primary lesion and intestinal tract reconstruction needed to be performed with an open approach. In our experience, the latter steps were feasible as long as the mesentery isolation was adequate. With the development of the laparoscopic technique, several studies have suggested that the laparoscopic approach is effective and safe for simultaneous resection of colorectal cancer and CRLM in appropriate patients (12,24-27). For patients unable to undergo laparoscopic operations, such as the patients in our study, the single-incision open approach is available with the benefit of shortening the operation time shortening and reducing both abdominal wall trauma and pain.

This study has several limitations. The patient numbers of both groups were relatively limited, and the patients were identified from a single center. Due to the availability of laparoscopic surgery, fewer patients in our hospital received an open approach. To ensure the value of this study, we chose relatively strict inclusion criteria. Furthermore, due to the limitation of time, we were unable to analyze the long-term outcomes for both incision approaches, including overall survival, disease-free survival, and long-term complications, which require further research.

Ethical Statement: The authors are accountable for all aspects of the work in ensuring that questions related to the accuracy or integrity of any part of the work are appropriately investigated and resolved. The study is approved by the Institutional Review Board.