Gastrointestinal stromal tumors (GISTs) which originate from the cells of Cajal or the precursor of these cells, are the most common mesenchymal neoplasms of the gastrointestinal (GI) tract (1). They account for 1–2% of all GI tumors in the United States and can occur anywhere in the digestive tract. However, they frequently occur in the stomach and small intestine and less often in the esophagus, rectum, and colon (2). Approximately, 85% of GIST tumors express antigen CD117 which is a receptor tyrosine kinase coded by the KIT gene (3).

Surgery is the main treatment for regional and resectable GISTs (4). However, unlike other solid tumors, lymphadenectomy is not routinely performed during the surgical process as nodal involvement is rare in GIST patients (i.e., 1.1% to 3.4% of cases) (5). The current National Comprehensive Cancer Network (NCCN) guidelines advise lymphadenectomy to be performed only when the lymph nodes are suspected to be affected, as in the case of enlarged regional lymph nodes (6). Even so, enlarged regional lymph nodes might be free from cancer cells thereby making lymphadenectomy unnecessary. Most surgeons tend to perform lymphadenectomy during surgery, because it seems unlikely to increase the patient’s risk of mortality. Therefore, it is a logical strategy to mitigate future intervention due to potential metastasis. However, lymphadenectomy is associated with increased surgical trauma and very likely to increase the risk of death (7).

Previous studies have shown that primary tumor size was positively associated with lymph node metastasis in solid tumors. For example, lymph nodes metastasis rates for T1a, T1b, T1c, and T2 stage breast cancer patients were 13.5%, 20.4%, 35.9%, and 50.0%, respectively (8). Similar to breast cancer patients, we can hypothesize that GIST patients with a small primary tumor size (i.e., <2 cm) might have a low probability of metastasis, and thus do not need to undergo lymphadenectomy; however, patients with a large primary tumor (i.e., >10 cm) and a high probability of metastasis should be referred for lymphadenectomy. Compared to GIST patients of more than 40 years of age, younger GIST patients who have a relatively high risk of nodal involvement might benefit from lymphadenectomy (5). At present, these hypotheses have not been investigated.

In this study, we used the Surveillance, Epidemiology, and End Results (SEER) to examine whether lymphadenectomy was associated with poor survival rates in GIST patients and whether primary tumor size, patients’ age, and tumor sites could be used as indicators for lymphadenectomy. Our study has implications in guiding surgeons to choose the most appropriate surgical treatments for GIST patients, specifically in relation to over-treatment.

We used data collected from the SEER project, which is a cancer registry system consisting of 18 regional registries covering 28% of the US population (9). SEER collects and codes data items using the North American Association of Central Cancer Registries (NAACCR). The code book can be downloaded from SEER’s website (https://seer.cancer.gov/). Primary cancer site and histology were coded according to the third edition of the International Classification of Diseases for Oncology (ICD-O-3). We identified GIST patients using the “cs0204schema” variable. In the SEER dataset, codes 35 to 41 of the “cs0204schema” variable represent GIST tumors of the appendix, colon, esophagus, peritoneum, rectum, small intestine, and stomach, respectively. The exclusion criteria were as follows: diagnosis by autopsy or death certificate only, missing age, previous cancer history, distant metastasis, survival time of less than 1 month, missing data concerning tumor size and/or lymphadenectomy information. This study was approved by the Institutional Review Board of Sun Yat-sen University Cancer Center (ID: B2017-099-13).

We used the variable “EOD10_NE” to define lymphadenectomy. This variable describes the total number of regional lymph nodes removed and examined by the pathologist. This variable had 8 categories. Detailed information of each category can be found in Table S1. We defined the patients with codes 01-89, 90, and 96-98 as the lymphadenectomy group; patients with codes 00 and 95 as the non-lymphadenectomy group; and patients with code 99 as the missing group. SEER defined tumor size information using two variables: “CSTUMSIZ” and “EOD10_SZ”. We defined the tumor sizes of GIST patients diagnosed before 2003 using the variable “EOD10_SZ” and those after 2004 using “CSTUMSIZ”. We coded continuous tumor size variables into 4 categories by defining the tumor size as less than 2, 2–5, 5–10, or >10 cm.

Table S1 The categories of “EOD10_NE” in the Surveillance, Epidemiology, and End Results database
Full table

Overall survival (OS) and cancer-specific survival (CSS) were the outcomes of this study. We used “STAT_REC” and “VSRTSADX” variables to define the overall vital status and cancer-specific vital status, respectively. For the overall vital status, SEER recorded patients who died before the follow-up cut-off date as “death” and those after the cut-off date as “censored”. The “VSRTSADX” variable designates the people who died as a result of their cancer as “cause-specific death” and the people who are still alive or who died from other cancers as “censored”. We used the “srv_time_mon” variable to define survival time. The detailed calculation process of survival time can be found here: https://seer.cancer.gov/survivaltime/3-fields-survival-time-active.pdf. Survival time was defined as the interval between the date of death or date of last contact and the date of GIST diagnosis. SEER records survival time in months.

According to the literature review and our clinical experience, we included age at diagnosis (continuous), sex (male vs. female), race (non-Hispanic White, non-Hispanic Blacks, Asian Pacific Islanders, Hispanics, others), marital status (married vs. unmarried), and grade (I to IV) as potential confounding factors.

We used mean and standard deviations or medians and inter quartile ranges to describe continuous variables and proportions to describe categorical variables. We compared the distribution of social-demographic variables (e.g., age, sex, race, marital status) and clinical variables (e.g., grade) between the lymphadenectomy group and the non-lymphadenectomy group using t-tests or chi-square tests. For continuous data not normally distributed, we used Mann-Whitney U test instead of t-test. We tested the differences in OS and CSS between the lymphadenectomy group and the non-lymphadenectomy group using Kaplan-Meier methods with log-rank tests and Cox proportional regression models after adjusting for potential confounding factors. We also ran several further univariate and multivariate Cox regression analyses to examine whether the effects of lymphadenectomy on OS or CSS differed across various subgroups, including tumor size (less than 2, 2–5, 5–10, and >10 cm), tumor sites (colorectal, peritoneum, small intestine, stomach), and age (no more than 40 and above 40 years). All the tests were two-sided, 0.05 was set as the significance level. SAS 9.3 (SAS Institute, Cary, NC, USA) and R 3.2.1 were used for the data analysis.

Characteristics of the participants 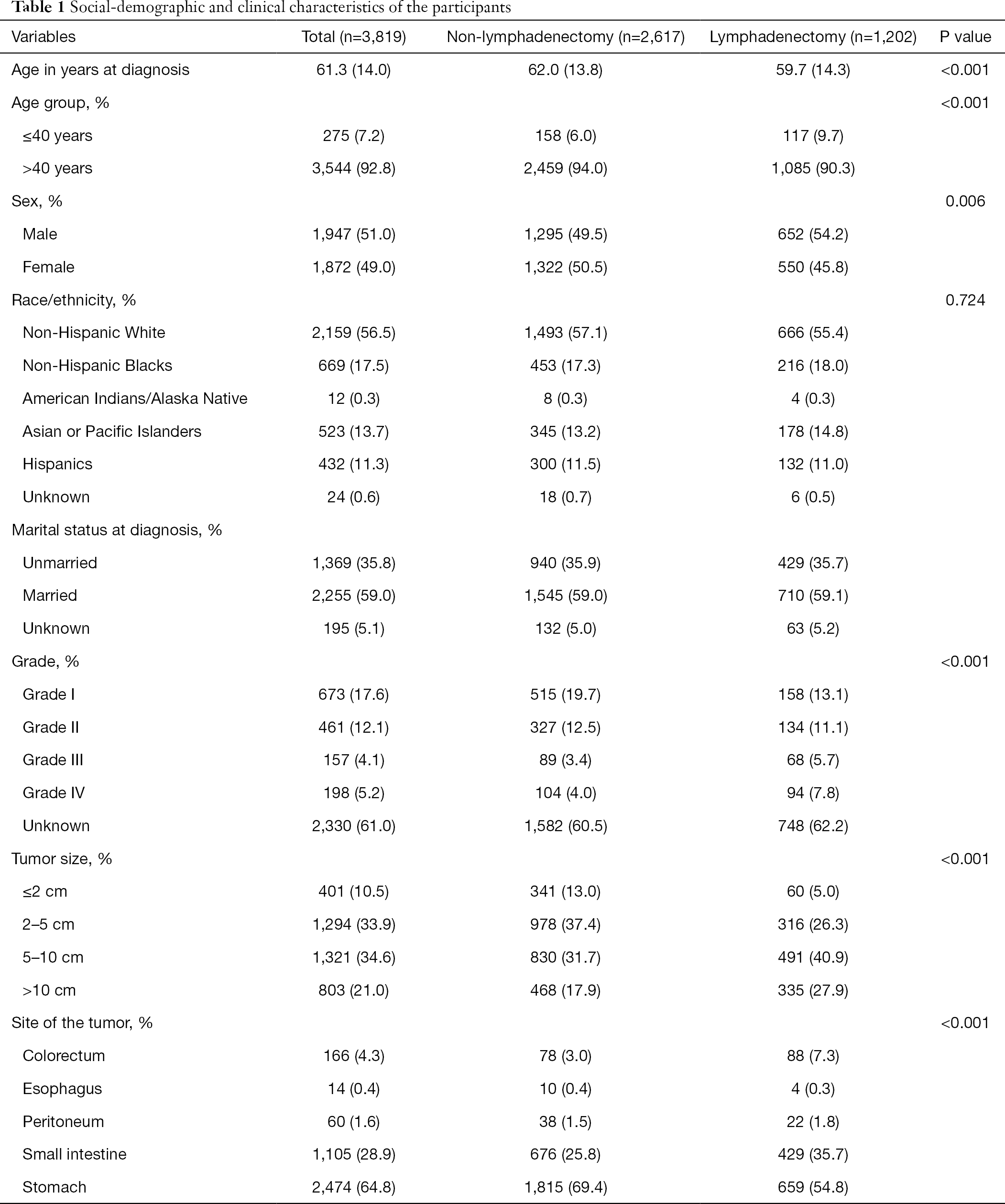 Influence of lymphadenectomy on OS and CSS 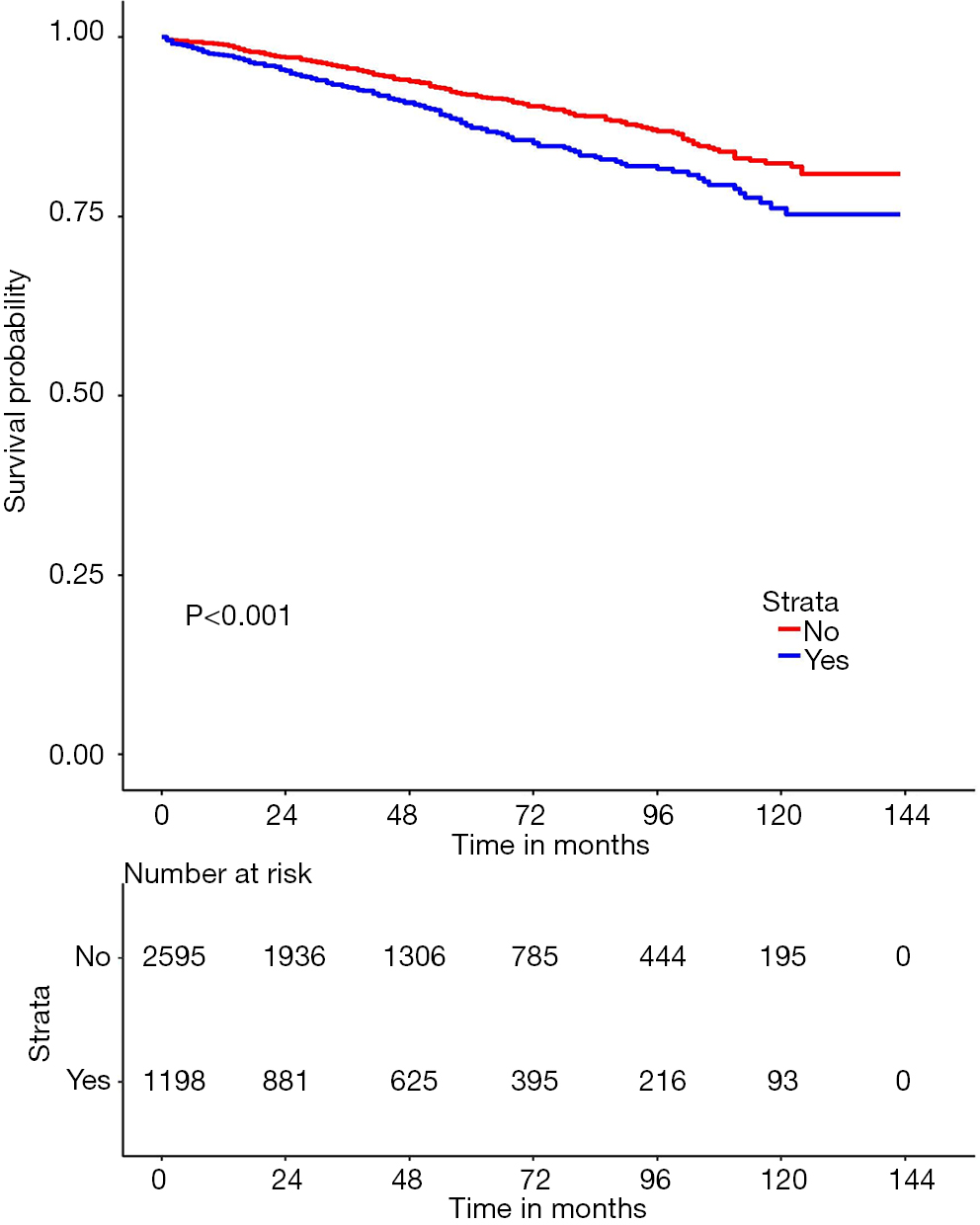 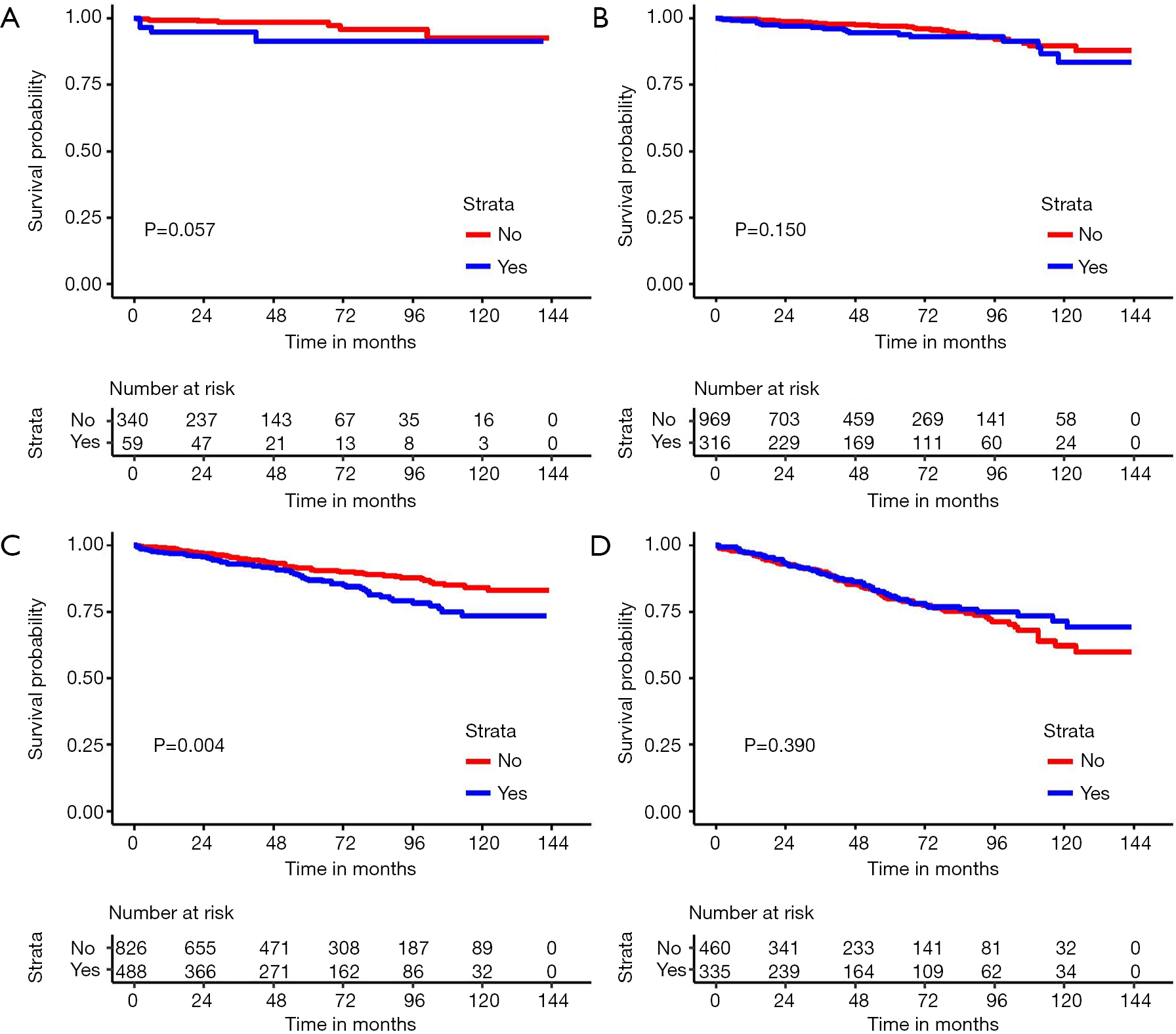 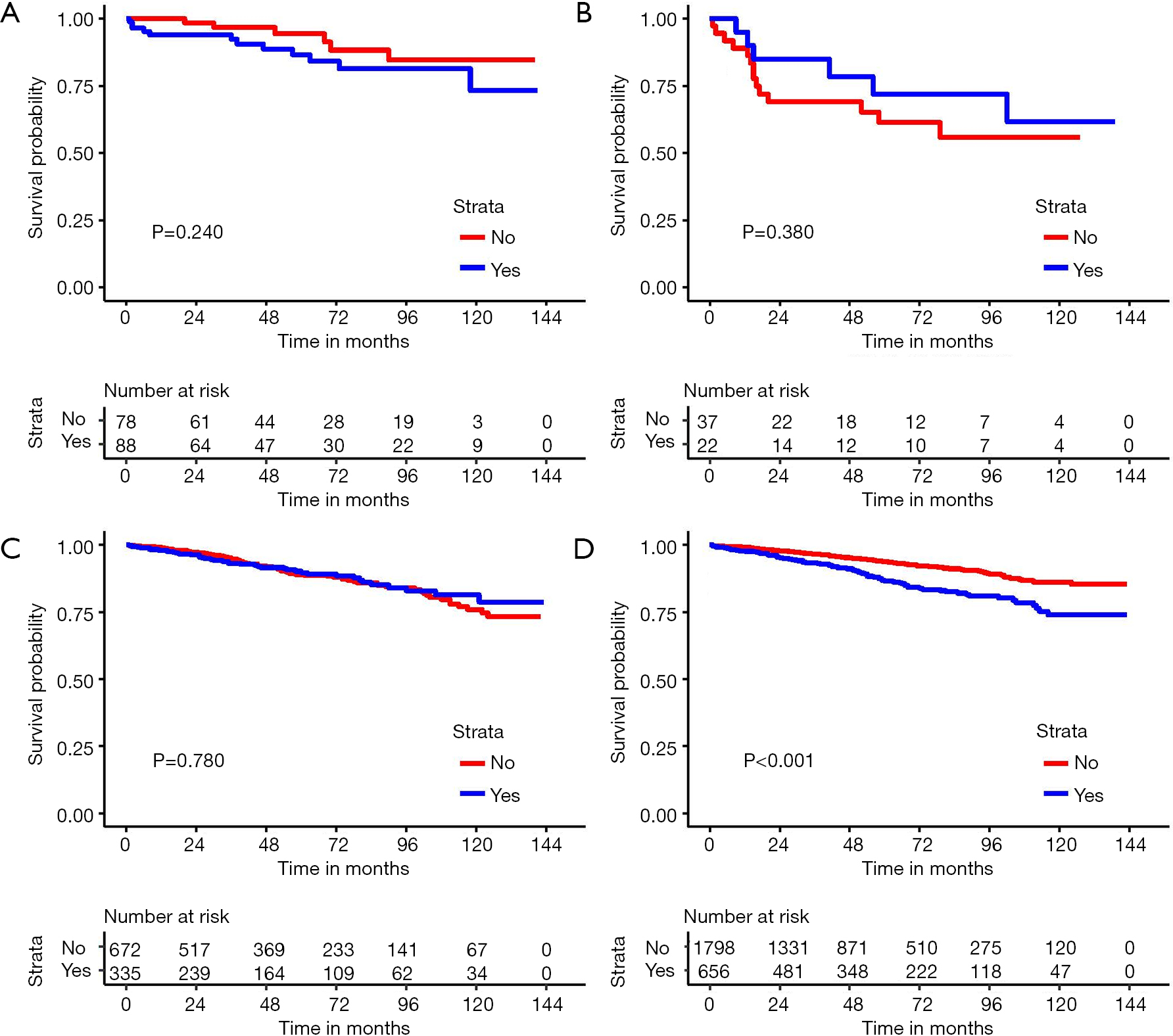 Cox proportion analysis between lymphadenectomy and OS and CSS 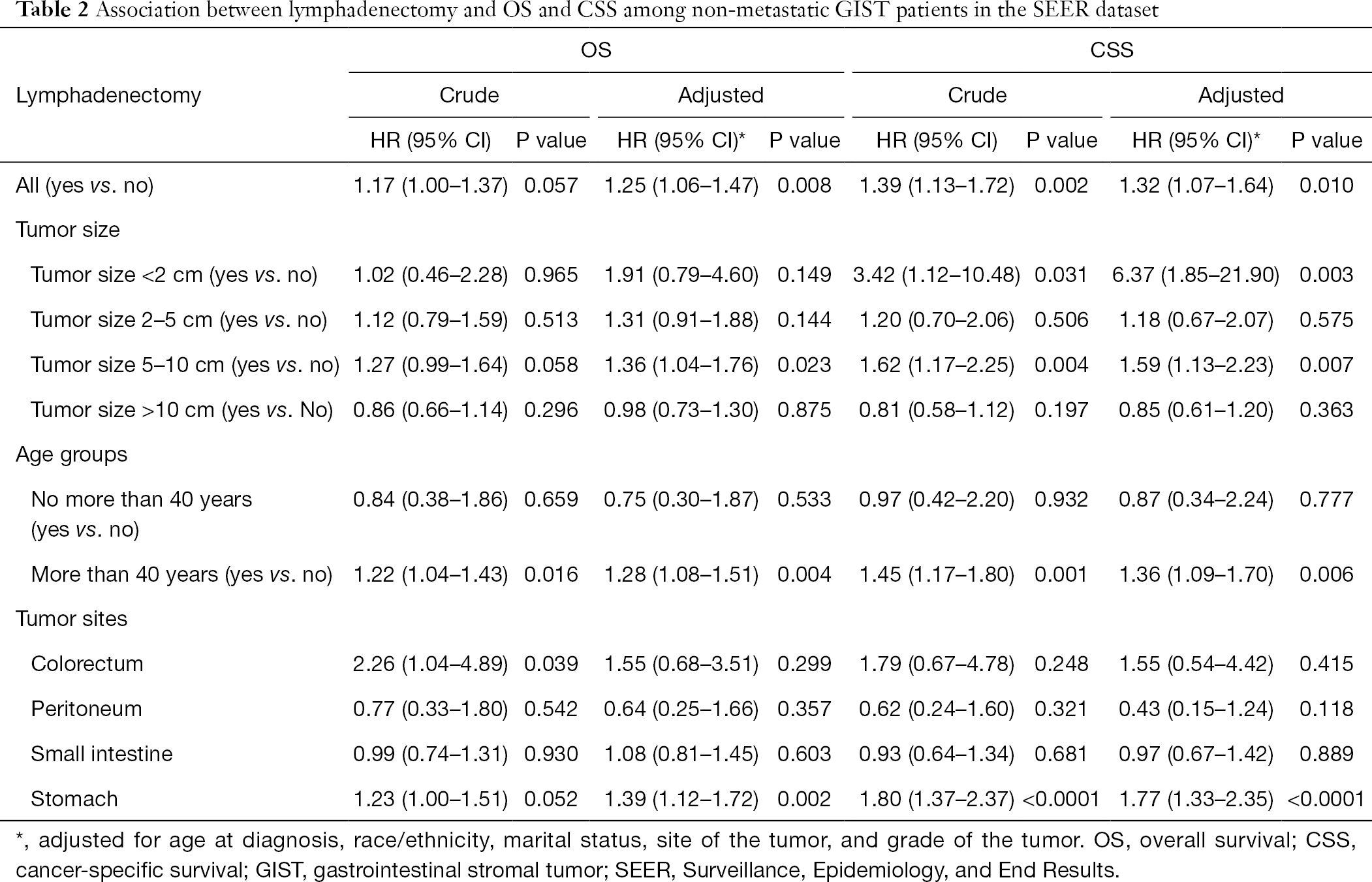 Our analysis shows that lymphadenectomy was associated with an increased risk of overall death and cancer-specific death in GIST patients. This was especially evident in patients with a primary tumor size of less than 2 cm, who were more than 40 years old and had a stomach tumor. To our knowledge, this is the first study to assess the effect of lymphadenectomy on GIST patients’ long-term survival.

The rate of nodal involvement differed significantly across age groups of GIST patients. Agaimy and Wunsch reported that the rate of regional node metastasis for gastric patients who were less than 40 years old was 25%, while for the whole population the metastatic rate was only 1% (5). In this study, we found, contrary to our hypothesis, that lymphadenectomy does not improve GIST patients’ long-term survival among those less than 40 years old. This indicates that lymphadenectomy may be an unnecessary treatment even among patients with a relatively high risk of lymph node metastasis. Our finding is similar to a previous study which revealed that metastasis had no impact on overall and disease-free survival in GIST patients (13).

The lymphatic drainage system of the GI tract is complex (14). The number of lymph nodes and the possibilities of nodal involvement could differ greatly across different organs. Evidence has suggested that the metastatic rate for small intestinal GIST is significantly higher than other types of GIST tumors. In this study, we found that lymphadenectomy does not improve long-term survival among GIST patients with tumors in the colorectum, esophagus, peritoneum, and small intestine, and that those with stomach tumors had an increased risk of overall and CSS death. Although we are unsure as to why, we suspect this is because most epithelioid GISTs were benign, with a mitotic count of less than 5/50 HPFs (15). Another possible explanation is the small sample sizes of patients for other types of GIST tumors. Ultimately, the findings of this study do not support lymphadenectomy according to those tumor sites.

Our study has several limitations. First, we did not adjust for the use of imatinib and mitotic rate, as SEER does not collect imatinib information, and a large percent of data concerning the mitotic rate is missing. Second, all participants were from the USA, so the findings are not generalizable to other populations. Therefore, caution and further analyses are needed before conclusions can be made to other populations.

In summary, in contrast to what was previously assumed, lymphadenectomy was associated with an increased and not a decreased, risk of mortality in GIST patients. In this study, primary tumor size and age were seemingly not indictors for lymphadenectomy. Further research, however, is needed before claims of possible lymphadenectomy-related over-treatment can be substantiated.

Ethical Statement: The authors are accountable for all aspects of the work in ensuring that questions related to the accuracy or integrity of any part of the work are appropriately investigated and resolved. This study was approved by the Institutional Review Board of Sun Yat-sen University Cancer Center (ID: B2017-099-13).