The effect of biofeedback training on intestinal function among patients with middle and low rectal cancer: a randomized controlled study

Rectal cancer is a common colorectal carcinoma causing death in China, for which middle and low rectal cancer accounts for 60–80% of the total incidence (1-3). With development of medical technology and people’s higher requirements for the quality of life, many patients with rectal cancer of more than 2 cm between the neoplasm inferior margin and dentate line are able to have a sphincter preservation operation (SPO), so that the proportion of SPO takes up 62–85% in all rectal cancer operation (4,5). Although bowel continuity can be realized through SPO, the inconvenience and mental stress of neostomy nursing throughout life should be avoided, as approximately 90% of patients face bowel symptoms such as an increase of defecation times, endless defecation, or even fecal incontinence, which are collectively referred to as anterior resection syndrome (ARS), and cause serious disturbance to daily life (6-9). The life quality for some patients with SPO is similar to that of patients with Mile’s operation (5). At present, there is no specific therapy for ARS, and management is mainly based on experience and symptoms. Some researchers have reported the positive effect of drug use, anal plugging, rectal lavage, biofeedback training, and pelvic rehabilitation on rectal function (3,10). However, most research has focused on treatment after the occurrence of postoperative symptoms and adoption of self pre- and post-control, while few studies have reported on the indications and timing of ARS prevention and ARS treatment (11). Biofeedback (BFT) is an emerging type of biological behavior therapy which centers on applying a biofeedback mechanism to collect the physiological activity information of patients. This information is processed and amplified by special equipment, and displayed by using familiar visual or auditory signals, so that patients can adjust physiological activities according to their own information drawn from the physiological activities observed; in this way, abnormal physiological change can be relieved or eliminated (12). BFT is considered to be an effective, safe, noninvasive, and economic method with little adverse effect (13). The present study is a prospective randomized controlled trial that explores the effect of biofeedback training on middle and low rectal cancer patients with SPO by dynamic analysis on patients’ bowl function. The aim is to provide a practical basis for constructing reasonable rehabilitation training schemes of patients’ anorectal function.

This study is a prospective and randomized controlled trial. The selected patients had middle and low rectal cancer in a tumor hospital in Guangzhou from June 2015 to December 2016. The inclusion criteria were as follows: patients who were diagnosed with middle and low rectal cancer by pathology and pelvic MRI (with inferior margin being 2 to 8 cm to the dentate line) with expectation that the anus be preserved through surgery but with the patients needing to carry a temporary stoma; age of 18 to 75; with primary and higher education, and being able to communicate in Cantonese or Mandarin; being able to take care of themselves, and understanding and agreeing to participate in this study. The exclusion criteria were as follows: patients with cognitive or language disorders; metastatic rectal cancer or advanced neoplasms; with other malignant neoplasms being treated; subjected to pelvic or anus area surgery or ostomy in the past; combined with preoperative severe diseases such as hemorrhoids, anal fissure, anus fistula, rectocele, Crohn disease, irritable bowel syndrome, ulcerative colitis. Patients could be eliminated from the study for the following reasons: could not be treated according to the program, or with poor compliance; patients who asked to quit; patients had the following conditions after preoperative radiochemotherapy, and after re-assessment,: the anus could not be preserved, radical resection could not be achieved and temporary neostomy was not needed, or temporary stoma could not be reversed; having postoperative intestinal obstruction, anastomotic fistula and other complications or not being able to eat through the mouth; the patients dying; the patients losing contact. 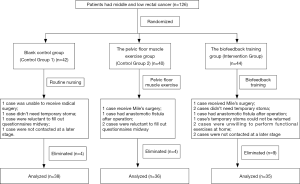 Figure 1 Flow chart of the design. 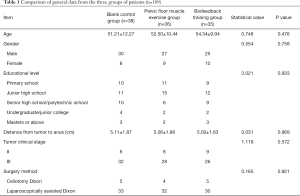 All three groups of patients received routine diagnosis and treatment. From the time when patients were diagnosed with rectal cancer, the inferior margin of the tumor was 2 to 8 cm from the dentate line; after examination by the attending doctor or multidisciplinary discussion, the treatment plan was determined to be preoperative radiochemotherapy with rectal neoplasm anterior resection (SPO) and the need to retain temporary stoma. The patients were in the group, 1 year after radical surgery, for a total of about 16 months. The methods of intervention for each group are detailed below.

The blank control group was given routine nursing. Radiochemotherapy and preoperative standard nursing were conducted, and diet, defecation posture and so on were guided.

The Chinese version of the Memorial Sloan-Kettering Cancer Center (MSKCC) intestinal function questionnaire is a patient self-assessment questionnaire developed by Temple et al. (14) in 2005. The Chinese version of the questionnaire included 4 factors of defecation frequency, defecation urgency, defecation affected by diet, and abnormal defecation feeling, a total of 18 entries. The 1st question is “For how many days during the last 4 weeks did you defecate normally?” According to the range of daily defecation times of the population studied, scoring for each item is divided into 5 equal parts, and each is assigned with a value between 1 and 5 points according to the degree of defecation from more to less; the rest of the entries adopt Likert 5-level grading which includes “always”, “often”, “sometimes”, “rarely”, and “never”; these are assigned a value of 1 to 5 points respectively, in which the 4th, 5th, 7th, 11th and 12th entries adopt reverse grading. The sum of scores of all entries was the total score of the scale, and the higher the total score, the better the intestinal function of the patients. In this study, the Chinese version translated by Hou et al. (15) was used for investigation; the Cronbach’s α coefficient of the total score of the Chinese version of the questionnaire for each factor was 0.602 to 0.856, the reliability of the retest was 0.662 to 0.893, and the questionnaire had good convergent validity and known group validity (15).

After data collection, the data were checked and input by two people using SPSS 15.0 software and described using frequency with mean ± standard deviation. The equilibrium test between the two sets of data was carried out by paired t-test and Chi-square test; the change trend of the intestinal function scale score at different time points was analyzed by using RMANOVA of a general linear model. P<0.05 indicates that the difference is statistically significant.

Comparison of general data from the three groups of patients

Age, gender, education level, tumor location and stage, and surgery methods of the three groups of patients had no statistical differences, and these data were comparable (see Table 1). 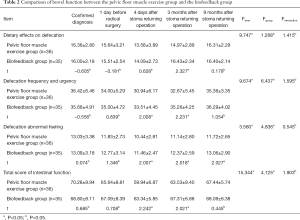 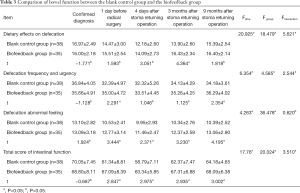 In the biofeedback training group, the total score of intestinal function and scores of each dimension were significantly higher than those of the blank control group during the post-intervention change, which suggested that biofeedback training can significantly improve intestinal dysfunction caused by treatment on patients with middle and low rectal cancer. That is, biofeedback training enables patients to recover faster, earlier, and closer to the pretreatment state at the end of the measurement. This is because the SPO of the middle and low rectal cancer often needs to remove part of the rectum close to the dentate line (5), causing damage to the rectal stool receptor, resulting in a smaller rectal volume and a paresthesia. Previous scholars (10) also pointed out that defecation dysfunction was more common than defecation incontinence in patients with middle and low rectal cancer, and its postoperative effects were more common and more severe (3,18,19). In addition, visceral afferent neurological dysfunction and fibrosis caused by radiochemotherapy led to residual rectal sensitivity disorder which led to abnormal intestinal function of patients. Biofeedback training can adjust the central autonomic pathway through visual and auditory information feedback (20), and can also change the local nerves and body fluids in the hypothalamus and cerebral cortex to adjust the neural reflex (12,20) to improve the sensory function of the rectum, thereby improving the intestinal function and mental state of the patients.

Biofeedback training is safe, effective, inexpensive, and has few side effects, but it takes a while to produce the desired result. The patients’ training compliance is critical to the training effect. Previous studies have also confirmed (12,13) that the efficacy of biofeedback training is not related to the patients’ age, gender, and course of the disease, but related to whether the patients can adhere to treatment and the course of treatment. Before the start of the study, the intervention program was revised and improved several times in order to ensure the patients’ convenience as much as possible under the premise of ensuring the effect to improve the patients’ compliance. In the process of intervention, the researchers also fully understood the psychological and social environment of each patient and took targeted measures to improve patients’ compliance. For example, the working time of the nurse who was responsible for the biofeedback training was flexibly arranged, and the biofeedback training was performed according to the time of the patients on the weekend. In order to improve the home training compliance of some patients who tended to forget the training time, the researchers regularly sent information, made special calendars to remind them of regular training, encouraged their families to participate, and urged patients to return to hospital for treatment on time.

In summary, biofeedback training cannot completely avoid the occurrence of intestinal dysfunction in patients with middle and low rectal cancer, but it can reduce the degree of intestinal dysfunction and promote the recovery of intestinal function of patients with rectal cancer during the course of treatment. All the patients in this study were all middle and low rectal cancer patients who received radiochemotherapy, surgery, and temporary stoma. The sample types were relatively simple and were high-risk patients with ARS, which can represent the situation of these patients better. These patients received biofeedback training immediately after they were included in the groups, which changed the method of training in the past (training was only conducted if there was a problem) and played a preventive role, so that it allowed patients to recover their functions and benefit earlier. The tracking time was relatively long, and the total time length was 16 months (9 months after the stoma returning operation). The patients were already in a stable state during the recovery period, and the researchers could comprehensively evaluate the effect of the intervention. The deficiencies in this investigation were that the number of patients in each group of this study was low, and it was a single-center study; thus, the representativeness needs to be strengthened. Large-sample and multi-center research can be carried out in the future.

Ethical Statement: The authors are accountable for all aspects of the work in ensuring that questions related to the accuracy or integrity of any part of the work are appropriately investigated and resolved. The study has obtained ethics approval from Ethics Committee of Sun Yat-sen University Cancer Center, the number of the approval was 5010-2014-04-01. Written informed consent was obtained from the patient for publication of this manuscript and any accompanying images.