It is well established that one-third of patients with non-small cell lung cancer (NSCLC) present with locally unresectable disease at the time of diagnosis. The standard of care for these patients is concurrent chemoradiotherapy (CRT) when EGFR mutations and anaplastic lymphoma kinase (ALK) rearrangements are absent. Although curative outcomes are achieved in patients given concurrent CRT, only a small proportion of patients achieve long-term survival, and 15–40% show recurrence that leads to treatment failure (1). According to the IASC data released in 2015, patients with pN3 NSCLC were reported to have an average median survival time of 10 months and an average 5-year-survival of 9% (2).

The use of antibodies against programmed cell death 1 (PD-1) is a promising new therapy for advanced cancers (3). In patients enrolled in the KEYNOTE-001 trial who had previously untreated NSCLC and a PD-L1 tumor proportion score of 50% or greater, pembrolizumab was associated with a response rate of 58.3%, with a median progression-free survival (PFS) of 12.5 months (4). Here, we report on a successful conversion from pN3 NSCLC to pN0 in a patient treated with a PD-1 checkpoint inhibitor combined with platinum-based chemotherapy achieving at least 33 months’ PFS. 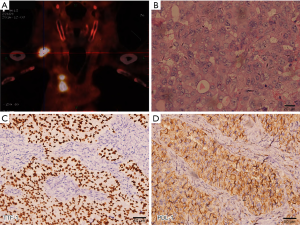 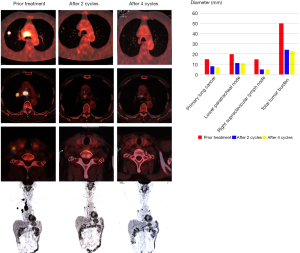 Figure 2 Radiological evaluation of the treatment efficacy with PET/CT at different time points.

Considering the potential drug resistance, radical surgery was performed to remove the upper lobe, the right hilar/mediastinal lymph node, and the supraclavicular lymph node. Postoperative pathological examination showed that there were a few cancer cells in the primary lung cancer lesion with an abundance of tumor-infiltrating lymphocytes and proliferation of fibrous tissue (Figure 3); no cancer cells were found in the 39 excised lymph nodes (0/39). Immunohistochemical results of the primary lung cancer tissue showed that PDL-1 expression was negative. Molecular pathologic analysis of these tissue samples showed no gene mutation (Figure 3). The patient was discharged from hospital after recovery without any periprocedural complications. As of now, the patient is in follow-up without adjuvant treatment, and recent PET-CT examination has found no evidence of recurrence or metastasis (Figure 3). 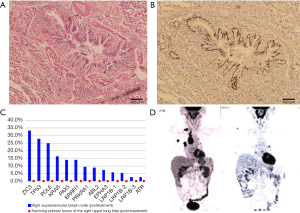 We conducted intradisciplinary and multidisciplinary consultation of this case. Our patient had IIIB-NSCLC, involving clustered mediastinal lymph nodes as well as supraclavicular lymph node metastasis. He had no chance of surgery according to current clinics guide, while he obtained radical surgery following chemotherapy plus immunotherapy and received sound therapeutic effect with no less than 33-month PFS. However, whether this strategy lead to a new treatment mode for IIIB-NSCLC, should also be considered.

In this case, chemotherapy plus immunotherapy successfully transformed a clinically locally advanced NSCLC patient (cT1N3M0 IIIB) to an early-stage NSCLC patient (ypT1N0M0 IA). The dramatic major pathological response (MPR) of locally advanced NSCLC neoadjuvant therapy has rarely been achieved in terms of either single-agent chemotherapy or single-agent immunotherapy. Langer et al. (5) reported that chemotherapy, in combination with pd1 blockage, could improve the objective response rate for patients with advanced non-squamous NSCLC, showing that PD-1 inhibitor could be synergistic with chemotherapy. Also, two biomarkers for PD-1 inhibitor, PDL-1 expression, and tumor mutation burden, were high. Thus, we recommended a combination of pembrolizumab, carboplatin, and pemetrexed as first-line treatment; the dramatic MPR verified the conversion from an unresectable case to a resectable case. For a long time, the radical operation was impossible for patients with N3 NSCLC. These patients were reported to have an average median survival time of 10 months, and an average 5-year-survival of 9% (2). The advent of immunotherapy offers a glimmer of hope for advanced lung cancer and has demonstrated an excellent down-stage effect for certain advanced cases of NSCLC. However, no experience was reported about the safety and validity of pulmonary resection in N3 NSCLC patients who have received immunotherapy. This case showed that chemotherapy plus immunotherapy could convert some patients with unresectable N3 NSCLC to early-stage NSCLC. While we should select patients by biomarkers carefully to guarantee definite downstage effect.

This case convinced us that it is safe to perform surgery following immunotherapy plus platinum-based chemotherapy, and the medium effect appeared encouraging with a PFS of at least 33 months. This experience convinced us that a subset of unresectable advanced NSCLC patients could receive help from this strategy and achieve a radical surgery opportunity. It is worth mentioning that PDL-1 expression and the tumor mutational burden of the surviving primary lung cancer tissue was negative, which means that further immunotherapy might be invalid, and its curative effect has reached its limit. In terms of radiographic evaluation, the disease presents as stable. This provides a theoretical foundation for the idea that surgical intervention should be adopted when disease stability is observed, and a partial response is noted. Postoperative adjuvant therapy was not suggested for conversion therapy from cT1N3M0 to ypT1N0M0 was obtained. We believe that this strategy could be implemented to those targeted therapy gene mutation wild-type locally advanced NSCLC patients who have both high PDL-1 expression and TMB, with the best timing of the operation being when the disease is stable following partial response, and follow-up observation is sufficient when MPR is achieved.

There are several questions should be further discussed in this case

Question 1: how should we select those III-NSCLC patients who can benefit from immunoadjuvant therapy and down staging enough to have the radical operation?

The treatment with chemo-immunotherapy before surgery, either in resectable or in non-resectable NSCLC is an experimental treatment. There are few prospective data available and it is unknown what the high rates of major pathological remissions and complete remissions mean for the survival of patients. It is simply unknown if a pathological remission after chemo-immunotherapy is biologically the same as after chemotherapy alone. It may well be that in order to obtain a long-lasting anti-cancer immune effect, the bulk of the tumor should remain longer in the body.

The radiological assessment of response after chemo-immunotherapy has not been settled. In all prospective studies, there has been no correlation at all between RECIST responses and pathological effects. A sizable minority of patients may even show some volume increase of the tumor without viable tumor cells in the resection specimen.

The surgical morbidity is largely unknown. Although resection seems safe, some studies report a difficult resection at the lung hilum because of fibrosis and a high rate of conversion from VATS to open thoracotomy.

Finally, there are no data to support the use of TKI in patients with stage III NSCLC as part of a curative intent treatment, even if targetable driver EGFR mutations or ALK translocations are present.

This case report is interesting, but should not lead to a different strategy than concurrent chemotherapy and radiotherapy, followed by durvalumab in fit patients with locally advanced NSCLC. Enrolment of patients like the one in this case report in prospective clinical trials is mandatory.

Question 2: how should we arrange immunoadjuvant therapy?

The only proven benefit for overall survival is concurrent chemotherapy and radiotherapy, followed by durvalumab in fit patients with locally advanced NSCLC. It is important to emphasize the significant role of support care in this setting. Durvalumab should be initiated within 6 weeks after the end of radiotherapy.

Question 3: how do we determine the optimal surgical time?

If we apply salvage surgeries to locally advanced stage III NSLC patients, we had better confirm resistance for previous therapy without distant metastasis. We should decide whether indication of curative surgery exist or not at the first evaluation. As you know, salvage surgery is a just optional therapy to aim curative status intensively based on the patient’s request.

As mentioned previously, surgery after or before immune therapy is at present an experimental therapy, for no long-term survival data are available. Therefore, the only way to answer this question correctly is to enter patients in well-designed prospective studies.

Question 4: is post-operative adjuvant therapy effective when MPR is achieved?

We think that the tumor status of just before surgery is important. If the tumor cells have resistance for previous therapy, it is difficult to expect the effect of it. We can evaluate preoperative status of the tumor cells from preoperative clinical course of image findings and pathological findings of surgical specimens. If we confirm MPR in surgical specimens, we should add adjuvant therapy using the same agent.

At present, it could be argued that postoperative radiotherapy could be administered in case of persistent N2 disease and/or an incomplete resection.

Patients with drive-gene-negative N3-NSCLC were considered inoperable in most cases. Furthermore, only a very small portion of patients who were assessed as being downstage while also being able to undergo a complete excision following neoadjuvant treatment by an MDT could obtain the possibility to undergo radical surgery. Immunotherapy in combination with chemotherapy could enhance the major pathology response rate in patients with but not limited to these following factors: PD-L1 high expression, high tumor mutation burden and wild-type drive gene. For these drive-gene-negative N3-NSCLC patients, this treatment strategy could improve the downstage rate and eventually more patients could obtain radical surgery opportunity.

Ethical Statement: The authors are accountable for all aspects of the work in ensuring that questions related to the accuracy or integrity of any part of the work are appropriately investigated and resolved. Written informed consent was obtained from the patient for publication of this Case Report and any accompanying images.