In 1821, Laennec described in his “Treatise on Diseases of the Chest” probably the first published description of acute respiratory distress syndrome (ARDS), however it wasn’t until 1967, in a landmark article published in Lancet that the term Acute Respiratory Distress Syndrome “ARDS” was mentioned (1). Ashbaugh and colleagues described a syndrome of tachypnea, hypoxia, and decreased pulmonary compliance in a series of 11 adults and one child with respiratory failure. The pathologic features included interstitial and intra-alveolar edema and hemorrhage, as well as hyaline membrane formation.

Like other clinical syndromes, ARDS lacks a definitive gold standard for diagnosis, so our diagnostic criteria have sought to identify clinical signs and symptoms reflective of the pathobiology of the disease. These relate to the diffuse albeit non homogeneous nature of the injury at both the alveolar epithelial and endothelial surface, inflammation, loss of functional residual capacity and impairment in pulmonary compliance, hypoxemia, and elevations in alveolar dead space.

Since its description, pediatric intensivists have relied on adult-based definitions of ARDS for patient care, research and prognostication, including both the American European Consensus Conference (AECC) and Berlin Definitions (2-4). Although the pathophysiology of ARDS in adults and children is comparable, practice patterns specific to pediatrics, co-morbidities, and contrasts in outcomes made it clear that a pediatric specific definition was needed (5).

In contrast to the Berlin definition for adult for adult ARDS, the Pediatric Acute Lung Injury Consensus Conference (PALICC) definition (6) simplified radiographic criteria, incorporates pulse oximetry metrics when PaO2 is not available, introduces the use of oxygenation index (OI) and oxygenation saturation index (OSI) to stratify severity groups instead of PaO2/FiO2 (PF ratio) with minimum positive end-expiratory pressure (PEEP) and creates specific criteria to define ARDS in children with chronic lung disease and cyanotic heart disease. In addition, no upper limit of age is defined for PALICC criteria, although children with perinatal-related lung injuries are excluded. Moreover, PALICC had pediatric specific criteria to define PARDS and at-risk for PARDS in infants and children on non-invasive ventilation. The definitions are summarized in Figures 1 and 2 below. Given the relatively major changes to the definition of ARDS proposed by the PALICC definition, it is important to evaluate the impact the definition will have on the international epidemiology of PARDS.

Since 2015, there have been several studies reporting aspects of the epidemiology of ARDS using the PALICC definition (Tables 1,2).Previous studies and meta-analysis using the AECC or Berlin definition estimate the incidence in the US, Europe and Australia and New Zealand to lie between 2–12.8 per 100,000 person years (7-12), or approximately 1–4% of PICU patients, or 8–10% of mechanically ventilated patients. Using Berlin and AECC criteria, Schouten et al. (12) reported the pooled weighted population-based incidence was 3.5 cases per 100,000 person years (95% CI: 2.2–5.7). The pooled weight PICU based incidence was 2.3% (95% CI: 1.9–2.9%). This trend was stable over time (13-17). 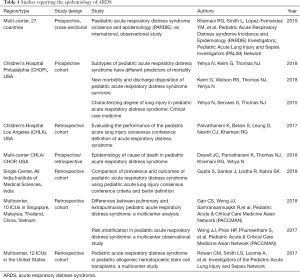 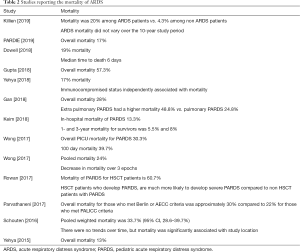 There have been no population-based studies estimating the incidence of PARDS. Interestingly the recently completed Pediatric Respiratory Distress Incidence and Epidemiology (PARDIE) study (18) in 145 international intensive care units, representing 27 countries, found that using the PALICC definition, PARDS occurs in approximately 3% of PICU patients, or 6% of those on mechanical ventilation. These results are consistent with previous estimates using AECC and Berlin criteria. So it appears as if the rate of PARDS continues to be stable over time, even when using the PALICC definition. However, PARDIE also found that the PALICC definition identified approximately 40% more children as having ARDS and diagnosed ARDS a median of 12.8 hours sooner than the Berlin definition within the first 3 days. This is consistent with other, retrospective reports, Gupta et al. (19) and Parvathaneni et al. (20). Reconciling this stable incidence over time with this nearly doubling in number of patients identified with the PALICC criteria highlights that monitoring practices have changed significantly in the last decade, and the requirement for invasive arterial blood gas values to apply Berlin and AECC definitions in current times and moving forward will under-estimate the PARDS incidence/prevalence. For this reason, it is important that future studies regarding the epidemiology of pediatric ARDS use PALICC criteria, including pulse-oximetry.

Notably, there appears to be significant regional and ICU specific variation in the rates of PARDS. From the PARDIE study, among mechanically ventilated patients, the number of new cases of PARDS was highest in North America, high income countries, during non-summer months, and lowest in medium volume PICUs (all P<0.01).

Multiple triggers for ARDS have been identified and other potential triggers continue to emerge as adverse pulmonary reactions to new therapies are observed. However, a few common triggers account for most cases of ARDS. In the pediatric population, intrinsic pulmonary processes including Pneumonia or lower respiratory tract infection remains the most common PARDS risk factors. Sepsis remains the second most common risk factor. Several studies have consistently shown this trend (19-26), which is true regardless of which definition is applied. In a secondary analysis of a multicenter retrospective cohort study (23) in Asia, Gan et al. (27) found that pulmonary PARDS accounted for 86.6% of cases and extrapulmonary PARDS for 13.4%. The most common causes of extrapulmonary PARDS was sepsis (82.9%) and for pulmonary PARDS pneumonia (91.7%). PARDIE (18) confirmed that Pneumonia/lower respiratory tract infection is the leading cause of PARDS followed by sepsis. Trauma is reported as a cause of PARDS in 4–8% (18,22,25,26,28,29), although as recently reported only 1.8% of critically injured children develop ARDS (by either Berlin or AECC criteria). Motor vehicle crashes are the most common mechanism of injury in pediatric trauma patients who develop ARDS (21).

Pre-existing co-morbidities are common amongst PARDS patients (12–74%). The PARDIE study showed that 63% of patients with PARDS have co-morbidities. Pre-existing lung disease was the most prevalent (28%), followed by prematurity (19%), chronic respiratory support (17%) and a history of congenital heart disease (11%). Interestingly because the PALICC definition (like the Berlin definition) allowed cardiac disease and ARDS to co-exist, PARDIE found that 8% of PARDS patients had acquired heart disease and 6% had documented left ventricular dysfunction. Immune suppression and cancer was also very common and represented 21% of all patients. Immune suppression was an independent risk factor for mortality, which is consistent with multiple previous studies (8,9,16,17,29-34).

Two meta-analyses conducted using Berlin and AECC definitions have highlighted that there appears to be a reduction in overall mortality amongst children with ARDS over time, with cumulative estimates converging around 20–30% in recent years (12,24). Many studies which have used the PALICC definition in the last several years have identified similar mortality rates (20,24,27) although mortality has been reported as being <20% in some cohort studies, including the PARDIE study (18,22). Importantly, there appears to be significant regional heterogeneity in mortality, which may be related to income disparities, health care systems, or a variety of other factors (12,18,19,24).

Hypoxemia severity has been suggested to stratify risk in current ARDS definitions (both Berlin and PALICC). Some studies have been able to identify a relationship between initial PALICC (or Berlin) severity and important clinical outcomes such as ventilator free days or mortality (18,23,24,27). However, others have been unable to reproduce this relationship at PARDS onset (22), or highlight that severe disease at PARDS onset discriminates mortality, with little difference between those with NIV, mild, or moderate disease (18,20), including those who have undergone a stem cell-transplant (35). Interestingly, a delayed measure of hypoxemia appears to improve mortality risk stratification (18,20,22). Previous studies have suggested waiting 12–24 hours after PARDS diagnosis to stratify risk, but the PARDIE study suggests this can be done approximately 6 hours after PARDS diagnosis.

In addition to hypoxemia severity, it is clear that the ARDS trigger is associated outcome. Using AECC and Berlin definitions of ARDS, Schouten et al. (12) found in their meta-analysis that patients with indirect lung injury (e.g., sepsis) had a significantly higher mortality than patients with direct lung injury (e.g., pneumonia), OR 3.29 (2.22–4.86, P<0.001). These findings appears to hold even when applying PALICC definitions, with several studies suggesting higher initial severity of illness for those with extra-pulmonary PARDS, more organ failure, higher mortality, and fewer ventilator free days (25,27). In addition, patients with indirect lung injury were more likely to be immune compromised (25). In the PARDIE study, immune compromised state and non-pulmonary ARDS retained a significant association with mortality, even after controlling for hypoxemia severity (18).

There are few published articles describing the cause of death in pediatric ARDS. Adult studies have shown that refractory hypoxemia is an uncommon cause of death in ARDS, and the leading cause of death is multisystem organ failure (MSOF) or neurologic factors (36,37). The same holds with pediatric ARDS. It is still not clear whether the mortality is primarily due to PARDS, aggravated by PARDS or associated with the inciting insult or comorbidities. Dowell et al. (26) performed a retrospective observational study of all nonsurvivors of PARDS at the Children’s Hospital of Philadelphia (CHOP) and the Children’s Hospital of Los Angeles (CHLA). They report an overall mortality of 19%, and after PARDS onset a median time to death of 6 days (IQR, 3–13 days). Greater PARDS severity and higher PRISM scores were associated with earlier deaths. Immunocompromised patients accounted for 35% of all non survivors and comprised 51% of late (>7 days) deaths. Patients who died within 7 days after PARDS onset were more prone to die of a neurologic cause of death. MSOF was the leading cause of death for patients who died greater than or equal to 7 days after PARDS onset. And 20% of PARDS patients died from refractory hypoxemia and this was also more common in those who died greater than or equal to 7 days after PARDS onset. Similarly in the PARDIE study, 34% of deaths were thought to be primarily related to refractory hypoxemia, 43% to multiple organ failure, 28% to neurologic injury, and 18% to unresolving shock.

In addition to high rates of mortality and long lengths of ventilation, it is increasingly recognized that many PARDS survivors have new morbidity after ICU discharge. Keim et al. (28) found that, 23% of PARDS survivors had new morbidity after ICU discharge, most notably a decline in functional status. Watson and colleagues have recently corroborated these findings in a large cohort study of mechanically ventilated children identifying approximately 20% have impaired health-related quality of life and functional status, and this is associated with etiology of respiratory failure and duration of mechanical ventilation (38,39). In addition post-ICU morbidity is very common in pediatric trauma patients who develop ARDS, with a nearly 4-fold higher risk of being discharged to a rehabilitation facility compared to trauma patients who do not develop ARDS (21).

In conclusion, the PALICC criteria have created a contemporary standard to define pediatric ARDS which is reflective of current practice patterns. A series of recent investigations have demonstrated these criteria, when applied to recent cohorts, identify many more patients with ARDS in current practice, compared to AECC or Berlin definitions. Nevertheless, there are consistent percentages of patients identified as having ARDS between current cohorts with the PALICC definition, and historical cohorts using the AECC or Berlin Definition. This highlights that the overall rate of ARDS is likely not changing over time, but that the PALICC definition is necessary in current times to ensure we are identifying all patients with ARDS. It is likely that many patients who meet PALICC criteria now would have been identified with Berlin or AECC 20 or 30 years ago, but are not currently identified by Berlin or AECC given changes in clinical practice with regards to respiratory monitoring. This reinforces the importance of using PALICC criteria moving forward for future epidemiologic studies of PARDS. However, it is also clear that PARDS severity alone (as measured by the PALICC) criteria insufficiently characterizes the risk for mortality or other important clinical outcomes amongst PARDS patients, although there appears to be some association between PARDS severity and outcome, particularly when hypoxemia is severe.