Cytochrome P450s (CYPs) are a superfamily of enzymes, which catalyse a broad range of compounds (1,2). These enzymes detoxify xenobiotics to exert body defence against environmental hazard. They also play key roles in carcinogenesis by turning precarcinogens into carcinogen such as azoxymethane and deactivating carcinogens (3). CYPs also regulate many human body biological processes such as biosynthesis of estrogen, conversion of cholesterol into bile acids and biotransformation of bile acids (4). Manipulation of these processes through CYP activities may help prevention and treatment of diseases. In this review, we summarise the roles of CYP3A4 in biotransformation of bile acids, regulation of CYP3A4 and stimulation of CYP3A4 activity for the treatment of cholestasis.

Bile acids are the major products of cholesterol catabolism, which have important physiological functions in human body. They facilitate not only the elimination of cholesterol and body wastes but also the digestion of fat and the absorption of lipid soluble vitamins. Bile acids also play a role as signalling molecules in the fine-tuning of energy homeostasis (5,6). However, bile acids are toxic when accumulated in high concentration. Cholestasis is the impairment of bile flow and is characterised by the accumulation of bile acids in the liver and serum (7). The accumulated bile acids are toxic and critical in the pathophysiology of cholestasis. A major aim of cholestasis treatment is to reduce the concentration of toxic bile acids in both blood and liver.

The toxicity of accumulated bile acids has been shown both in vivo and in vitro, which result in a series of pathological changes including alterations of P450 activity. In a 5 day bile duct ligated model, total P450 was decreased to 50% and 75% of controls in male and female rats respectively (7,8). In vitro, addition of bile acids dramatically inhibited P450-catalysed reactions (9). The effect correlates with the hydrophobicity of bile acids with most toxic being the lithocholic acids, the moderately toxic deoxycholic and chenodeoxycholic acids and the least toxic cholic acid. At a cellular level, bile acids caused apoptosis at low concentrations and necrosis at high concentrations.

There are adaptive responses in the body to decrease the pool of bile acids to protect the body from their toxicity. These responses include decreased synthesis, increased metabolism and renal elimination of bile acids. Nuclear receptors have the important functional roles in these responses and hold much promise in the treatment of cholestasis (10). CYP3A4 is the major enzyme for the detoxification of bile acids, hydrolysing bile acids to facilitate their subsequent glucuronidation by UDP-glucuronosyltransferases (UGTs) (11). Stimulation of CYP3A4 activity could be employed for the treatment of cholestasis.

Role of CYP3A4 and its regulation

CYP3A4 is a member of cytochrome P450 (CYP450) enzymes encoded by a gene superfamily (12). Among all CYP enzymes, CYP3A4 is the most important, which is the most abundant in both liver and intestinal tract (13). The gene encoding CYP3A4 is located in chromosome 7q21.1. Other CYP enzymes encoded in 7q21.1 are CYP3A5, CYP3A7 and CYP3A43. But they are minor isoforms.

The enzyme CYP3A4 has broad substrates (Table 1). The broad substrates are attributed to the structure of the CYP3A4 active site which has been characterised by X-ray crystallography (23). It has been reported that CYP3A4 has a much larger active site cavity to bind a broad range of substrates, compared with other CYPs (23,24). CYP3A4 also has multiple binding sites (25). The substrates are generally transformed into inactive forms or compounds of lower activity through reactions such as N-oxidation, C-oxidation, N-dealkylation, O-dealkylation, nitro-reduction, dehydration and C-hydroxylation. CYP3A4 metabolises not only xenobiotics including majority of drugs and carcinogens to protect living organisms from environmental toxicity (12,26) but also many endogenous compounds such as cholesterol, bile acids, fatty acids, prostaglandins, leukotrienes, retinoids and biogenic amines (12,27).

CYP3A4 expression, its stability and inhibition are regulated by different mechanisms. Many factors including nuclear receptors, hormones, xenobiotics and signalling molecules regulate CYP3A4 expression as shown in Figure 1 (27,28). In CYP3A4 regulatory region, there are two binding sites for nuclear receptors PXR and FXR to bind to and confer transactivation (29). PXR forms a heterodimer with 9-cis retinoic acid receptor (RXR) to bind to CYP3A4 promoters (14,30,31). Disruption of these elements in the promoter of CYP3A4 caused dramatic decrease in reporter activities (30). CYP3A4 dis-regulation in PXR-null mice further demonstrated an important role of PXR in CYP3A4 activation (32). Another nuclear receptor constitutive androstane receptor (CAR) has also been demonstrated to activate CYP3A4 (33,34). Many hormones such as triiodothyronine, dexamethasone and growth hormone involve the regulation of CYP3A4 (20). CYP3A4 is also regulated by a large number of xenobiotics including many drugs (Table 1) (18,21,31,35). Several drugs, some beverage and bile acids can inhibit CYP3A4 activity (9,15,22,36-38). 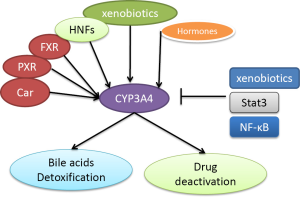 CYP3A4 in bile acids transformation and its alterations in cholestasis

It has been shown that CYP3A4 is distinctly increased in several cholestasis models and also upregulated in bile duct-ligated rats (BDL) (52). This could facilitate detoxification of bile acids and increase their renal elimination. However, increased bile acids have detergent effect, which decreases the CYP3A4 activity (9,53).

Up-regulation of CYP3A4 expression in cholestasis

PXR forms a heterodimer with retinoid X receptor (RXR) to bind to xenobiotic response elements in the CYP3A4 promoter (63-66). Disruption of the PXR gene eliminated the enhanced expression of CYP3A4 by its inducers dexamethasone and pregnenolone 16a-carbonitrile (32). In PXR-null mice, introduction of human PXR allowed the induction of CYP3A4 by the human-specific inducer-rifampicin (32). In the regulatory region of CYP3A4 gene, two PXR elements (distant and proximal) have been identified that are separated by more than 7,000 nucleotides in the genome (30). Disruption of the distant and proximal elements causes a 73% and 53% decrease in reporter activities respectively. However, in vitro binding studies showed that the proximal element was preferred. Chromatin immunoprecipitation experiments showed that the genomic fragment harbouring the proximal element was preferably precipitated over the fragment containing the distant element in the CYP3A4 gene (67).

Other nuclear receptors such as CAR may be also involved in the regulation of CYP3A4 (69). CAR has been demonstrated to regulate CYP3A4 transcription (30). It has a crosstalk with PXR to regulate overlapping but distinct genes. However, so far, no evidence supports the binding of bile acids to CAR.

Accumulated bile acids can inhibit CYP3A4 activity. As shown in vitro, they have non-specific detergent effects on several rat CYPs and non-CYPs (9). It is quite possible that CYP3A4 is also subjected to the direct inhibition of accumulated bile acids. This should be taken into account when considering the actual activity of CYP3A4 in cholestasis.

Estrogen has an important role in cholestasis. It could cause cholestasis especially in patients with bile acid transporter deficiency. It has been found to accumulate in BDL rats (7,8) and to down-regulate male specific CYPs 2C11 and 3A2. Recently, estrogen was considered to down-regulate CYP3A4 in human liver. After comparing 27 human hepatic CYP3A4 mRNA levels, it was found that young females have lower levels of CYP3A4 mRNA than young men, while older women displayed the same levels of CYP3A4 as older men, both of which were much higher than those in young women (74). Thus, the implication is that estrogen may play a role in regulating CYP3A4 transcription. However, another study using 54 samples of human liver microsomes did not find any influence of age or gender on CYP3A4-mediated midazolam hydroxylation and CYP3A4 protein mass (75).

Overall, activity of CYP3A4 will be determined by (I) transcriptional up-regulation of CYP3A4 expression by bile acids through nuclear receptors, (II) down-regulation by blood levels of estrogen and (III) direct inhibition of CYP3A4 by bile acids due to detergent effect of bile acids. Therefore, CYP3A4 activity may be stimulated at the early stage of cholestasis but inhibited when cholestasis further develops due to highly increased blood levels of estrogen and bile acids.

CYP3A4 expression is highly variable. There are marked individual variations in the expression of CYPs including CYP3A4, which affect the biological response (efficacy and/or toxicity) of many drugs as well as individual responses to CYP inducers (76,77). In humans, a 10-fold variation exists among individuals for rifampicin induced CYP3A4 expression (78-80). In the liver, substantial differences in CYP3A4 expression between individuals have been detected that could not be explained by environmental factors (78). A similar situation was found in the intestine, whereby CYP3A4 mRNA levels in biopsies of the mucosa of five healthy subjects varied by about 10 fold (79). This variation could be related to the polymorphisms of CYP3A4 and the other genes involved in the regulation of CYP3A4.

Any polymorphism in the genes involved in CYP3A4 mediated bile acid detoxification in cholestasis could affect this adaptive response. More than 20 CYP3A4 mutations have been identified in humans although the frequency is low (81). Mutations of CYP3A4 affect the metabolism of clinically used drugs, leading to toxic blood concentration of drugs. Theoretically, these CYP3A4 variations can also affect bile acid detoxification. However, there have been no reports on them as there have been for bile acids transporters. There is also a report that a high degree of SNP polymorphism in PXR found in a screening of the Dutch population (66). How these mutations affect the cholestasis is not yet assessed.

The nuclear receptor activators have been extensively studied and some of them are actually used clinically. Rifampicin, for example, is used for treatment of cholestasis (82-86). In 14 healthy volunteers, administration of rifampicin at 600 mg for 7 days markedly increased urinary excretion of bile acids, the 6-α-glucuronides, caused by increased production of 6 hydroxylated hyocholic and hyodeoxycholic acids, with subsequently conjugation at C-6 by UDP-glucuronosyltransferase (87).

As shown in Figure 1 and Table 1, CYP3A4 activity is stimulated by many other compounds. These CYP3A4 activators may also be considered for use in treating cholestasis. There are possibilities to discover a better compound than UDCA and rifampicin in terms of effectiveness in reducing the levels of bile acids both in liver and blood. It is also possible to use some of them for combinatorial application with rifampicin or UDCA. At present these stimulators are not well studied in the treatment of cholestasis.

CYP3A4 catalyzes more than 50% of clinically used drugs. Any change of CYP3A4 activity will affect the pharmacokinetics of these drugs. Thus, the manipulation of CYP3A4 in cholestasis must be incorporated into the consideration of the dose of other drugs used in these patients. It also affects the metabolism of other drugs such as anti-cancer drug cyclophosphamide (17), cardiovascular drug nifedipine (88). The main drugs affected are listed in Table 1.

CYP3A4 is an important enzyme in bile acid detoxification, which is responsively up-regulated in cholestasis. Disruption of the CYP adaptive responses in cholestasis leads to more severe hepatic injury, thus retaining of high levels of CYP3A4 protein and its enzymatic activity by CYP3A4 inducers has therapeutic implication. Clinically, it is essential, to reduce the factors which inhibit CYP3A4 and to employ CYP3A4 activators to maximize its activity for detoxification of bile acids in the treatment of cholestasis.