Osteoporosis, a disease characterized by deteriorated microarchitecture and increased fragility of the bone, has a high prevalence in the postmenopausal women, leading to reduced quality of life, greater economic burden, elevated disability and even higher mortality (1,2). Postmenopausal bone loss has long been ascribed to the deficiency of endogenous estradiol (E2) production with age (3). In recent years, lower testosterone (T) and higher sex hormone binding globulin (SHBG) concentrations have also been recognized as factors related to increased bone loss and fracture risk in postmenopausal women (4,5).

It has widely been reported that type 2 diabetes mellitus (T2DM) is associated with higher skeletal fragility and consequently increased fracture risk, despite the conflicting evidence that patients with T2DM show decreased, normal or even elevated bone mineral densities (BMDs) assessed by dual X-ray absorptiometry (DXA) compared with individuals without diabetes (6-8). The discrepancy might be attributed to the different examining sites of BMDs, different sites may result in various outcomes, especially in T2DM patients (9). A recent study reports the reduced bone mass and increased vertebral fractures in Chinese women with T2DM, indicating that BMD may still be used to reflect the bone health in diabetic females (10). To date, most studies exploring the relationships among sex hormones and skeleton have been conducted in non-diabetic subjects. It is necessary to better understand the relationships among sex hormones and BMDs at various sites in postmenopausal women with T2DM who have greater risks for osteoporosis and fractures.

World Health Organization (WHO) Fracture Risk Algorithm (FRAX) is an online instrument that has been widely used for the assessment of fracture risk by many professional organizations (3). FRAX employs clinical risk factors such as age, body mass index (BMI), previous fractures, and other factors alone or combined with femoral neck (FN) BMD determined by DXA to estimate the 10-year probability of major osteoporotic fracture (MOF) and hip fracture (HF) (11). There is evidence showing that FRAX may underestimate the future fracture risk in T2DM patients, because diabetic risk factors are not included in this tool (12,13). Replacement of rheumatoid arthritis (RA) with DM in FRAX is recommended to effectively improve the performance of FRAX in T2DM (14,15).

The present study aimed to explore the associations of sex hormones including SHBG, follicle-stimulating hormone (FSH), luteinizing hormone (LH), E2, total testosterone (T) and free testosterone (FT) with BMDs, osteoporosis/osteopenia and 10-year probability of MOF and HF determined with modified FRAX after the replacement of RA with T2DM in postmenopausal women with T2DM.

The clinical information was retrospectively collected from postmenopausal women with T2DM who were hospitalized in the Department of Endocrine and Metabolic Diseases, Rui Jin Hospital, Shanghai Jiao-tong University School of Medicine between January 2010 and December 2012. Amenorrhea for more than one year in women aged >50 years was defined as postmenopause (16). Subjects with hormone treatment or endocrine diseases that may influence bone metabolism including Cushing syndrome, hyperthyroidism, hypogonadism were excluded; subjects with RA, chronic kidney disease (CKD) stages 4 and 5 (eGFR <30 mL/min) and malignancy were excluded; subjects receiving pharmacotherapy that may apparently affect bone metabolism including alfacalcidol, calcitonin and bisphosphonates were excluded. Finally, a total of 214 postmenopausal women (aged 50–84 years) with T2DM were included in this study. The protocol for the research project was approved by the Ethics Committee of Rui Jin Hospital affiliated to Shanghai Jiao-tong University School of Medicine (2019 No. 45). All procedures performed in studies were in accordance with the ethical standards of the Institutional Research Board and with the Helsinki Declaration.

The medical information was collected based on the medical records. Height was measured to 0.1 cm, and weight recorded to 0.1 kg. BMI was calculated as weight in kilograms divided by height in meters squared.

Continuous variables were compared with the Shapiro-Wilk test. Data with normal distribution are presented as mean ± standard deviation (SD), data with abnormal distribution as median (interquartile) and categorical variables as number (percentage). Independent-sample t-test was employed to compare the variables with normal distribution and Mann-Whitney U test to compare the variables with abnormal distribution. Spearman correlation was used to assess the correlations among sex hormones, BMDs and 10-year probability of MOF and HF. Multivariate linear regression analysis was performed to determine the contributions of sex hormones to the BMDs at three sites, MOF and HF. Considering the original FRAX design, risk factors such as age and BMI were not enrolled in linear analysis. In logistic regression models, important sex hormones were fitted as continuous variables to examine the odds ratios (ORs) and 95% confidence interval (CI) of osteoporosis/osteopenia (defined as a BMD T-score at either L2-4, FN or TH less than −1). Receiver operating characteristic curves (ROC) of osteoporosis/osteopenia were generated to evaluate the maximal Youden index and the associated cut-off values of SHBG. In multivariate logistic regression model, the ORs (95% CI) of osteoporosis/osteopenia across cut-off values of SHBG and potential risk factors were calculated. The prevalence rate and ORs (95% CI) of osteoporosis/osteopenia according to the quartiles of SHBG were compared with Chi-square test and logistic regression, respectively. Scatter diagrams with trend lines of SHBG concentrations with BMDs and MOF, HF were produced by logistic regression. Data processing and statistical analysis were performed using Statistical Package for the Social Sciences (version 22.0; SPSS, Chicago, IL, USA). A value of P<0.05 was considered statistically significant. 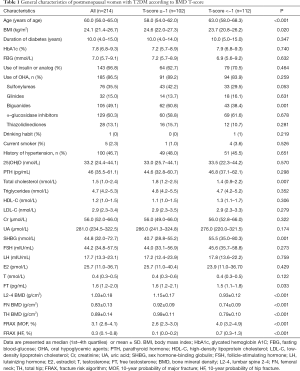 Correlations among sex hormones and BMDs, 10-year probability of MOF and HF 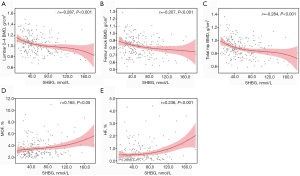 The contributions of sex hormones to BMDs, MOF and HF in postmenopausal women with T2DM were further analyzed by multivariate linear regression analysis. BMDs at three sites, MOF and HF were used as dependent variables, and sex hormones as independent variables. In unadjusted model (Model 1), SHBG and E2 were the determinants of BMDs at three sites (Table 3). However, after adjustment for age, duration of diabetes, HbA1c, FBG, insulin or analog use, OHA use (sulfonylureas, glinides, biguanides, α-glucosidase inhibitors, and thiazolidinediones respectively), history of hypertension, PTH, 25(OH)D, total cholesterol, triglyceride, HDL-C, LDL-C, Cr and UA in Model 2, SHBG was still a determinant of BMDs at L2-4 (β=−0.228, P<0.05), FN (β=−0.209, P<0.05) and TH (β=−0.313, P<0.05), but E2 had no relationship with the BMDs (Table 3). After further adjustment for BMI, SHBG was still related to the BMD at L2-4 and TH although its contribution reduced, but there was no relationship between SHBG and BMD at FN. SHBG and E2 were the determinants of modified MOF (SHBG, β=0.253, P<0.001; E2, β=−0.159, P<0.05); SHBG was the only determinant of modified HF (β=0.262, P<0.001). Besides, we also assessed the associations among sex hormones and 10-year probability of fractures evaluated by standard FRAX tool (without replacing RA with DM), the results were similar to the present study showed (Table S1). 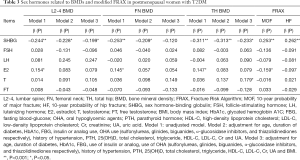 Table 4 ORs of osteoporosis/osteopenia for per SD increase in SHBG, FSH or E2 of postmenopausal women with T2DM
Full table

The prevalence of osteoporosis/osteopenia showed an increased trend with the increase in SHBG of post-menopausal women with T2DM (P trend=0.001) (Figure 2 and Table 5). Logistic regression analysis revealed that, compared with subjects in Q-1, subjects in Q-4 had increased risk for osteoporosis/osteopenia (OR =4.21, 95% CI: 1.17–15.12, P=0.015) even after adjustment for multi-variables including E2 and T (Table 5). 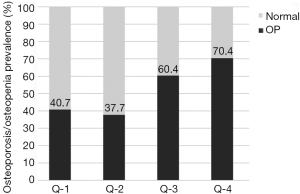 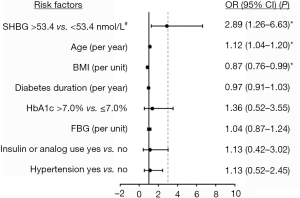 In the present study, the primary findings were that, in postmenopausal women with T2DM, SHBG was inversely associated with the BMDs at L2-4, FN and TH, but positively with the 10-year probability of MOF and HF; high SHBG was the major risk factor of osteoporosis/osteopenia independent of E2 and T; FSH, LH, E2, T or FT was not associated with the BMDs, MOF or HF. To our knowledge, our study for the first time investigated the relationships of serum SHBG with BMDs and future risk of fractures in postmenopausal women with T2DM.

It has universally been acknowledged that estrogen deficiency plays a central role in the pathogenesis of postmenopausal osteoporosis (19). In our diabetic-postmenopausal individuals, E2 was found as a determinant of BMDs in unadjusted regression model (Table 3), but its significance disappeared after adjustment for multi-variables. This might be explained as that the postmenopausal individuals in the present study had an extensive E2 deficiency, and thus the protective effect of E2 on BMDs was quite weak. The associations identified in the unadjusted model might be attributed to the interactions with other potential factors such as age and BMI.

SHBG, a transport protein, acts to bind main sex hormones including circulating T and E2, transporting them towards target cells. Its effect on sex steroids bio-activity and metabolic outcomes are widely investigated (20,21). A widely accepted theory about how SHBG is involved in bone metabolism is based on its anti-estrogenic effect. Higher SHBG binds to estrogen to reduce its biologically active form, which consequently reduces BMD and increases fracture risk (22). However, there is evidence showing that SHBG is not only a carrier protein that affects the bone indirectly, but also a mediator that specifically modifies the membrane receptors including estrogen receptors and consequently triggers the relevant intracellular signaling pathways (23,24). The present study revealed that high SHBG was an independent risk factor of osteoporosis/osteopenia even after adjustment for E2 and T. Even though the biological mechanism of how SHBG is involved into diabetic bone and fractures remained unclear, our findings still suggest that measurement of SHBG could give a clue to the risk of osteoporosis/osteopenia and future fracture risk in postmenopausal women with T2DM.

Notably, in our results, the associations of SHBG with BMDs at L2-4 and TH were compromised and its association with FN disappeared after adjustment for BMI. One possible explanation is that BMI is one of numerous factors that affect BMD (25). Indeed, our study also demonstrated that BMI was a protective factor of osteoporosis/osteopenia as shown by multivariate logistic regression analysis (Figure 3). In addition, studies also reveal that BMI may markedly influence the variation of SHBG. Higher BMI has been found to be associated with lower SHBG, leading to the elevation of active E2 and T, which results in the maintenance or increase of BMD (21). Despite these findings, our study further revealed that SHBG was still an independent risk factor of osteoporosis/osteopenia in multivariable regression model, even after adjustment for BMI.

This study has several limitations: (I) this study was retrospective, and the changes in sex hormones and BMDs over time were not examined. Thus, whether their changes are involved in the interactions is still unclear; (II) although several osteoporotic fractures were recorded as long-term end points, the number of fractures was too small to conduct statistical analysis. Therefore, the modified FRAX was used to calculate the 10-year probability of HF and MOF. The replacement of RA with diabetes in FRAX improves the performance of FRAX in assessing fracture risk of diabetes patients; (III) no healthy controls were included in the present study.

Ethical Statement: The authors are accountable for all aspects of the work (if applied, including full data access, integrity of the data and the accuracy of the data analysis) in ensuring that questions related to the accuracy or integrity of any part of the work are appropriately investigated and resolved. The protocol for the research project was approved by the Ethics Committee of Rui Jin Hospital affiliated to Shanghai Jiao-tong University School of Medicine (2019 No. 45). All procedures performed in studies were in accordance with the ethical standards of the Institutional Research Board and with the Helsinki Declaration.