Prevalence of cervical spine degenerative changes in elderly population and its weak association with aging, neck pain, and osteoporosis

Neck pain is a major public health problem, both in terms of personal health and overall well-being as well as the associated expenses. In one meta-analysis, Fejer et al. reported the point, one year, and lifetime prevalence of neck pain was 7.6%, 37.2%, and 48.5%, respectively, with women experiencing more neck pain than men (1). Most cases of uncomplicated neck are assumed to result from muscle sprains and strains, ligamentous injuries, and spinal degenerative changes (2). MRI is commonly used to investigate the possible causes of neck pain; however, the association between MRI finding of cervical spine degenerative changes and neck symptoms remain not well defined (2-8). Cervical degenerative findings are common in asymptomatic subjects, particularly subjects aged 40 and older (3-7). Frequency and range of cervical spine degenerative findings in asymptomatic individuals are also highly age-dependent (6,9-12).

This was a part of the year-14 follow-up study of osteoporotic fractures in men (MrOS) (Hong Kong) and osteoporotic fractures in women (MsOS) (Hong Kong) studies. At baseline, 2000 Chinese men and 2000 Chinese women ≥65 years were recruited from the local communities from August 2001 to March 2003 (14-16). The recruitment criteria were established so that the study results from the cohort would be applicable to a broad population of similarly aged community-dwelling men and women. The project was designed primarily to examine the BMD of older Chinese adults prospectively for 4 years. All participants were community dwelling, able to walk without assistance, had no bilateral hip replacement and had the potential to survive the duration of a primary study based on their general medical health. No participants had a known malignancy or previous lumbar spine surgery. The study protocol was approved by the Chinese University of Hong Kong Ethics Committee. Written informed consent was obtained from all participants. The male and female study cohorts was followed at year-4 (1,519 males and 1,546 females) (17,18). During 2014–2017, a year-14 follow-up was carried out. Cervical spine MRI was performed in 272 males (mean: 82.9±3.83 yrs; range, 77–99 yrs) and 150 females (mean: 81.5±4.27 yrs; range, 74–100 yrs). The sample selection for MRI was random with potential bias for more mobile subjects as they were more willing to participate.

MRI was performed using a Philips Achieva TX 3.0T scanner equipped with dual transmitter (Philips Healthcare, Best, The Netherlands). The subjects were scanned in supine position, with the body coil used as the radiofrequency signal transmitter and dedicated spine coil used as the signal receiver. Due to the constrain of the MRI machine time available for this population study, only T2 weighted sagittal images were acquired. The imaging parameters included: 2-D turbo spin echo sequence, TR =3,000 ms, TE =120 ms, flip angle=90, slice thickness =3.5 mm, and inter-slice gap =0.4 mm, FOV = 270 mm × 189 mm, Matrix =340×263, NEX =1. All MRI was performed in Saturday morning. The study was designed so that males would be examined firstly. Due to some logistical reasons in the course of the study, this Saturday morning MRI time became no longer available, thus at the close of this study more males were scanned than females. To match the female subject number, 152 males (mean: 82.2±3.93 yrs; range, 77–99 yrs) were randomly selected, and male data were analyzed based on all participant (n=272) and the subgroup (n=152). It was noted that there was no overall difference between the whole group analysis and the subgroup analysis, therefore the whole male group data are presented in this study. 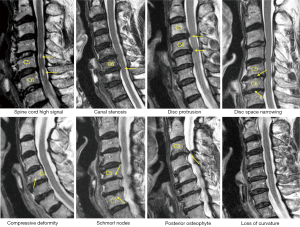 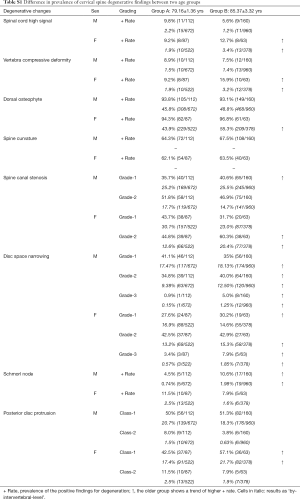 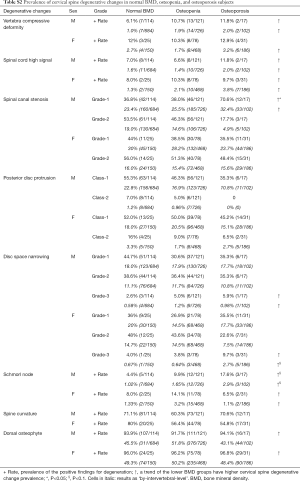 The frequencies and of cervical degenerative findings are shown in Table 2. Out of the 422 subjects, 414 (98.1%) exhibited at least one MRI degenerative finding at one or more vertebral levels. These degenerative changes tended to be more common in females; however, statistical significance was all not achieved. The degenerative findings’ cervical level-specific and severity-specific data are shown in Figure 2. Spinal canal stenosis, disc space narrowing, and disc bulging/protrusion were common at c3/4, c4/5 and c5/6 levels, with C5/6 had the highest overall positive frequency. Spinal cord high signal was more common at C4/C5 levels. C5 vertebra had the highest prevalence of cervical compressive deformity. 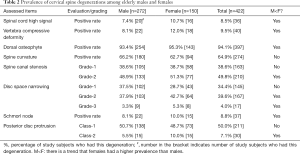 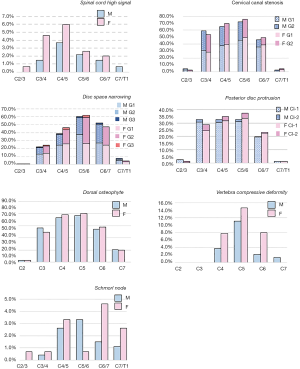 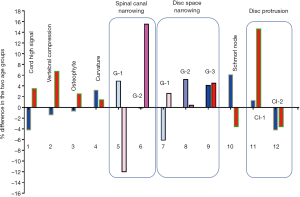 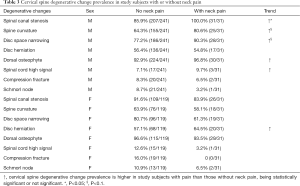 Although most acute neck pain episodes resolve spontaneously, more than a third of affected people have low grade symptoms or recurrences more than one year later (1,2). Surgery is more effective than conservative treatment in the short term but not in the long term for most of these patients; moreover, early treatment does not have a meaningful impact on prognosis (19,20). Variables that predict neck pain persistence include female sex, older age, presence of radiculopathy, higher baseline pain intensity, multiple pain sites, smoking, obesity, poor general health, and a variety of psychosocial factors (2). Cervical disc degenerations affect more than 80% of patients over 60 years without producing any symptoms (21). Degenerative changes can both be physiological aging changes and pathological changes (21,22). As expected, this study confirms degenerative changes are extremely common in elderly subjects. In consistence with other reports of younger subjects (6,11,23,24), spinal canal stenosis, disc space narrowing, and disc bulge/protrusion were common at C3/4, C4/5 and C5/6 levels, with the peak at C5/6 level. However, spinal cord high signal was more common at C4/C5 levels, both for males and females. It is generally considered that spinal cord high signal, which is associated with liquidation of spinal cord, is caused by spinal canal stenosis, particularly when impinged by protruded discs or osteophytes. Therefore our study shows a mismatch between the cervical level with the highest frequency of spinal canal stenosis and highest frequency of spinal cord high signal, this could partially be due to frequent rotation of the upper segment of cervical spine. This study shows, at advanced age, the older group (>81 yrs old) still had higher prevalence of degenerative findings or higher severity of degenerative findings, and the age-dependence was more notable in females.

Our study also shows the cervical spine degenerative changes had higher frequency in elderly females than in elderly males; furthermore, females tended to have more severe grades of degeneration. In addition, while males and females had similar prevalence of spinal canal stenosis, spinal cord high signal is notably more prevalent in females, indicating females are prone to develop cervical myelopathy. Fejer et al.’s analysis noted that women report more neck pain than men, with on average the neck pain prevalence being 1/3 higher in females than in males (1). This neck pain prevalence difference is likely be due to both differences in structural degeneration as well as difference in physiological mechanism. Women generally have a lower threshold of perception of pain and in reaction to it (25-27). However, in an evaluation of pain characteristics of adults 65 years of age and older referred to a tertiary pain care clinic, the older patients had relatively more physical problems concordant with their complaints, but fewer psychological factors contributing to disability than the younger pain patients (27). Recent evidences suggest relative estrogen deficiency may contribute to the accelerated lumbar disc degeneration and degenerative spondylolisthesis in postmenopausal women (28-33), which in turn is associated with increased prevalence of lower back pain (32). In the cervical spine, a similar trend may have been observed. In their study Matsumoto et al. (34) noted that disc degeneration was present in 17% of discs of men and 12% of those of women in their twenties, and 86% and 89% of discs of both men and women over 60 years of age. However, how long this ‘post-menopause accelerated spine degeneration phase in women relative to men’ lasts after menopause has not been determined. Gambacciani et al. (35) reported after menopause disc space shows a progressive decrease that almost entirely occurs in the first 5 to 10 years since menopause. However, our recent report in a 4-year follow-up study starting from a mean age of 72.5 years shows, there was a greater lateral thoracic and lumbar disc area loss in women than in men (36). That women have faster disc space narrowing than men even 20 years after menopause concurs with previous reports of Wάng et al. (16) and de Schepper et al. (37). The participants’ age in this study is the oldest of the similar studies. This study tentatively suggests this ‘accelerated spine degeneration’ phase could last till >81 years old.

Despite the poor relationship between radiological abnormality and low back pain symptoms (38), low back pain is more common in subjects showing lumbar spine degenerative changes (39). For the relationship between cervical spinal degenerative changes and neck pain, this study tends to concur with this notion. On the other hand, this study does show the cervical spinal degenerative changes are very common in subjects without neck pain, even spinal cord high signal and vertebra compressive deformity were commonly noted in those subjects without neck pain. This study did not show an association between Schmorl nodes and neck pain. However, the overall prevalence of this sign was low. It is known that Schmorl nodes are mostly asymptomatic (40).

Compared with elderly males, elderly females are more likely to develop osteoporosis and osteoporotic vertebral facture, and senile osteoporosis is associated with lumbar disc degeneration (13). Osteoporosis may be an etiological factor in the development of disc degeneration with osteoporosis inducing loss of vertebral height, leading to instability, facet arthrosis, and disc degeneration. While thoracic/lumbar vertebra compressive deformity is commonly seen in clinical practice (15,41), there are few research studies on this aspect for cervical spine. This study shows that low BMD status, being osteopenia, or osteoporosis, was associated with compressive fracture of cervical vertebra. This study confirms elderly females had higher prevalence of cervical vertebra compressive deformity than elderly males. For males, this study low BMD status was associated with spinal canal stenosis. A potential minor factor which could have interfered this observation is that females with osteoporosis were slightly older, however, there was no age difference between the three BMD groups in males. Schmorl’s node is the herniation of nucleus pulposus through the cartilaginous and bony end plate into the body of the adjacent vertebra. Bone loss may predispose affected vertebrae to herniation of more disc material, exacerbating the condition. In this study, a trend is shown in males that lower BMD status was associated with higher frequency of Schmorl’s node.

There are a number of limitations in this study. This study was not purposely designed for looking at cervical spine degenerations and statistical power was not initially determined; though for a MRI based study the study subjects number is large compared with many other reports (4-12). Thus we should more look at the trend of this study’s results rather than look too much into the actual p-values. If the males and females show the same trends, then these trends are more likely to be real. Due to the higher prevalence of cervical spine degenerative changes and their ill-illuminated underlying causes, it is not surprising that the associations demonstrated in this study between degeneration and age, neck pain, or BMD were only weak. Statistical significance can be improved when the sample size is increased. In this study only T2 weighted sagittal images were acquired, this would negatively affect characterization of degenerative change of facet joints and foraminal stenosis.

Funding: This study was partially supported by a grant from the Research Grants Council of Hong Kong SAR (Project no. SEG CUHK02).