According to current rescue strategies for subjects with out-of-hospital cardiac arrest (OHCA), immediate cardiopulmonary resuscitation (CPR) significantly improves survival. Effective ventilation is an important component in survival and is associated with return of spontaneous circulation (ROSC) and neurological recovery (1). However, the most optimal method for effective ventilation is still under debate (2).

Traditionally, bag-valve mask (BVM) is often preferred to quickly establish ventilation and gain valuable time for successful recovery of spontaneous circulation, in the meanwhile, BVM is simple and practical to perform. However, it has some shortcomings, including leakage and gas pressure on the stomach, leading to increased risk of regurgitation and pulmonary aspiration (3).

Endotracheal intubation (ETI) is considered to be the optimal method for airway management by some studies because it provides better airway control and protection against upper airway obstruction compared with BVM. It also would decrease risk of gastric aspiration and control of carbon dioxide removal. However, incorrect placement of endotracheal tube and unnecessary interruption of chest compression are associated with prolonged operation and are major drawbacks of pre-hospital ETI (4).

Laryngeal mask airway (LMA) is an alternative airway adjunct that maintains respiratory ventilation, which may enable rapid and effective airway control in comparison with BVM when used by inexperienced personnel (5). Moreover, ventilation by LMA may be particularly advantageous for subjects with facial dysmorphia and obesity (6).

Many studies have observed the characteristics of these three methods of ventilation, but the conclusion regarding which one should be considered the priority remains unclear (7,8). In this study, we aimed to comprehensively evaluate the efficacy of BVM, ETI, and LMA in rescuing adult cardiac arrest by performing a meta-analysis and indirect comparison of these three methods of ventilation.

All search results were evaluated according to the Preferred Reporting Items for Systematic Reviews and Meta-Analyses statement by two independent researchers (Z Yang and J Li) (9). The screening accuracy rate of two independent researchers were evaluated by exact Fisher’s test. The selection of original studies was based on the process of viewing titles, abstracts, and full-text papers. The inclusion criteria were as follows: (I) studies focused on adult subjects with OHCA; (II) comparative studies examining the effect between any two of these methods: BVM, ETI, and LMA; and (III) comparative studies that reported at least one outcome of interest (ROSC, survival to admission, survival to discharge). Non-comparative studies, review articles, abstracts, case reports, editorials, expert opinions, commentary articles, not published in English and letters were excluded.

Data were extracted independently by two investigators (Z Yang and J Li), and conflicts were adjudicated by a third investigator (H Liang). Information on all available variables from the selected studies was extracted. ROSC, survival to admission and survival to discharge were used to evaluate the outcomes. Quality of each clinical trial was assessed using the Newcastle-Ottawa Scale (for cohort study) (10) and Cochrane collaboration’s tool (for randomised controlled trial) for assessing risk of bias (11). Quality assessment was conducted using the Cochrane risk of bias assessment tool. Risk of bias assessment for included studies in meta-analysis was classified as “high”, “low” or “unclear”.

After studies screening, there were only comparison studies between LMA vs. BVM and LMA vs. ETI, thus indirect treatment comparisons (ITCs) were used to indirectly compare BVM and ETI, which methodology was mentioned before (12). In short, the log risk ratio (log RR) of the adjusted indirect comparison for arm A vs. B was estimated by logRRAB=logRRAC−logRRBC, and its standard error for logRR was (13):

A traditional meta-analysis was performed to determine the RR of outcomes with its 95% confidence interval (CI) for LMA vs. BVM and LMA vs. ETI. ITCs were then conducted to compare BVM and ETI using ITC computer program (Canadian Agency for Drugs and Technologies in Health, Toronto, Canada). Single arm meta-analysis was conducted to calculate the pooled rate of each outcome.

A total of 349 records were screened after exclusion of duplicates up to July 31, 2018 (Tables 1,2). The screening accuracy rate of two independent researchers were (77% vs. 70%; P=0.50). Finally, 13 full-text articles reporting efficacy among BVM, ETI, and LMA met the inclusion criteria and were considered in this analysis. Of the included articles, 4 were studies focus on LMA vs. BVM (2,16-18), 4 were studies of LMA vs. ETI (8,19-21), and 5 included both comparisons (Figure 1) (22-26). All studies got at least 7 points according to the Newcastle-Ottawa Scale and Cochrane risk of bias assessment tool (Figure 2). 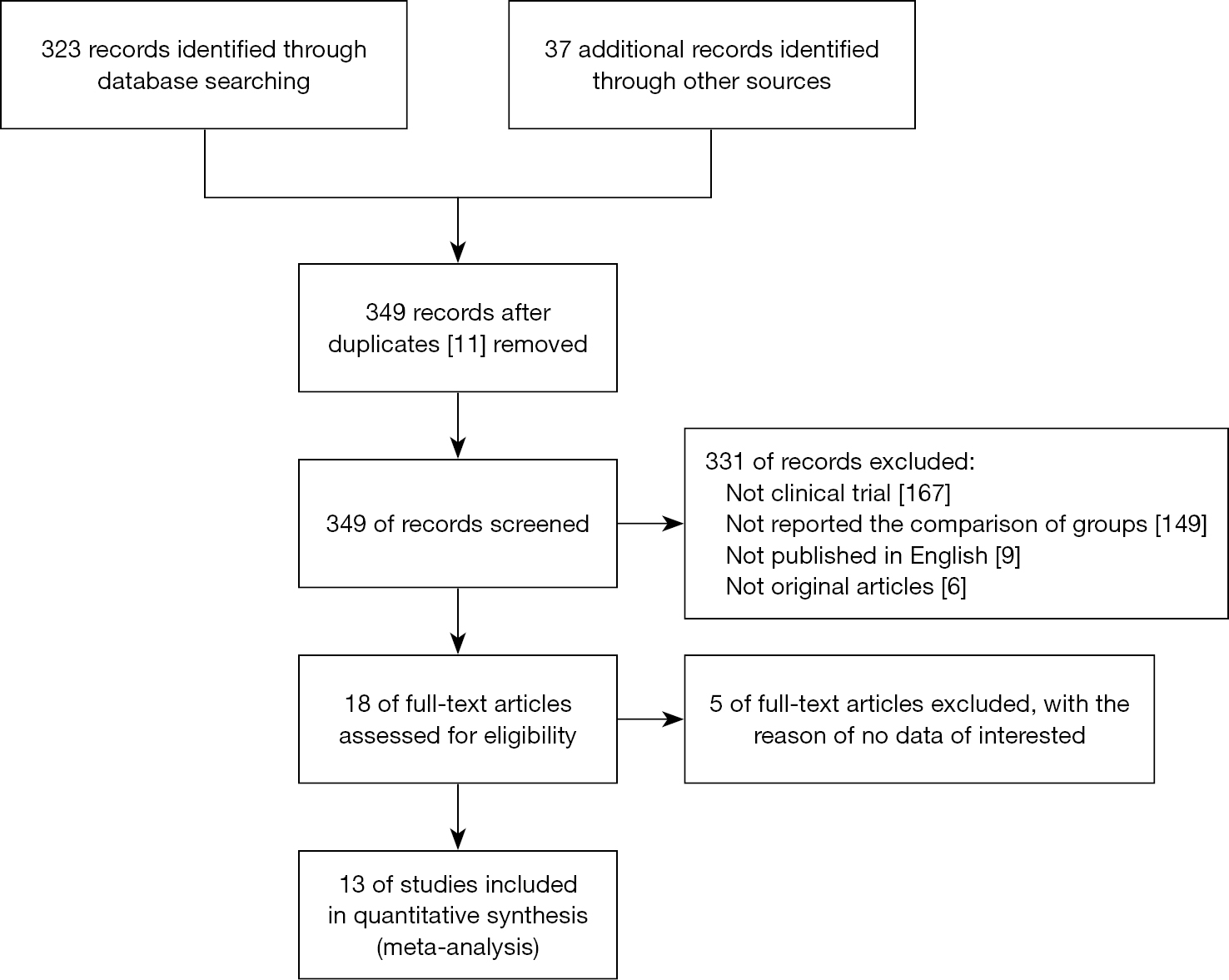 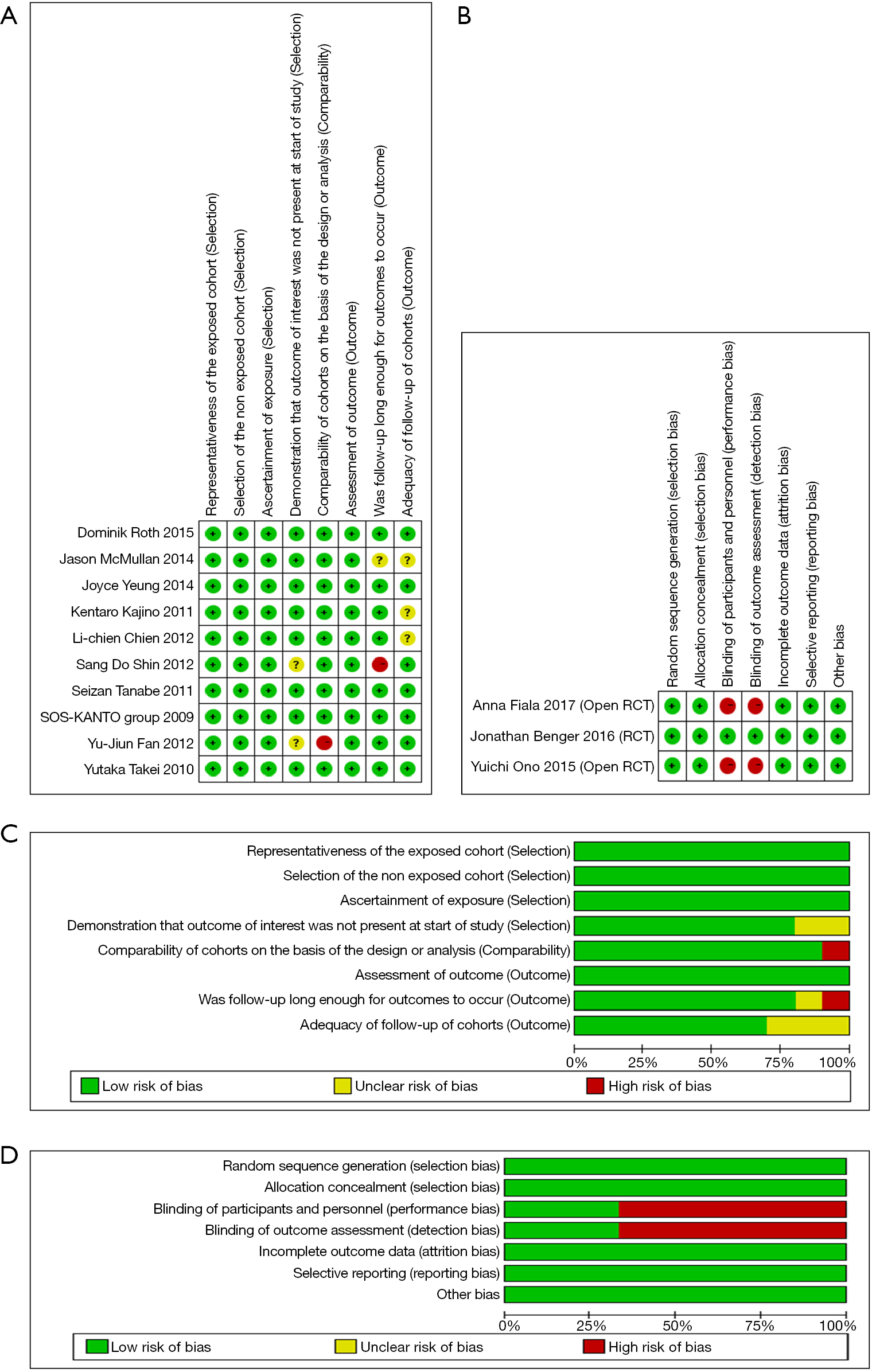 Visual inspection of funnel plots suggested a symmetric distribution for majority of the outcomes (Figure 6). Begg and Egger’s test confirmed there was no significant publication bias. A sensitivity analysis was performed by excluding the studies with the lowest-quality score. This did not influence the results.

For subjects with OHCA, ineffective ventilation is the most common clinical event contributing to severe respiratory depression and worse survival outcomes. BVM, ETI, and LMA are the most common methods of ventilation support, but the best choice is still controversial. Herein, we conducted a meta-analysis and indirect comparison of these three methods, and the results indicated that ETI offers the best outcomes among these three methods and LMA is relatively inferior to the other two methods.

BVM is the most commonly used ventilation airway adjunct and has been widely used for pre-hospital emergencies. It is simple and practical to operate and can quickly establish ventilation and gain valuable time for successful recovery. However, efficiency of the ventilation depends on whether the airway is effectively open and whether the mask is tightly closed. In a pre-hospital rescue, improper operation leads to flatulence, food reflux, and even suffocation.

ETI has been a “gold standard” for the airway management of subjects with OHCA for a long time (27). In the United States, 80% of subjects with OHCA are treated with ETI for advanced airway management during CPR (23). It provides better airway protection and ventilation control to prevent upper airway obstruction and effectively reduces the risk of bloating, reflux aspiration, and carbon dioxide retention. Nevertheless, ETI also has shortcomings in pre-hospital rescue, such as aspiration pneumonia, insertion into the esophagus, time-consuming preparation, unnecessary interruption of chest compression, complex requirements for intubation, and high failure rate. As a result, out-of-hospital ETI has been increasingly questioned as the preferred method of management of advanced airways (28,29).

LMA is a common supraglottic respiration airway adjunct that has been listed by the American Society of Anesthesiologists as a first-aid method for subjects with difficult airways. It can quickly establish and maintain respiratory ventilation. Moreover, in comparison with ETI, laryngoscope is not needed, and the success rate is higher than that of ETI. Even if LMA is not properly placed, it can maintain an unobstructed airway and is suitable for first-time emergency use. In Japan, South Korea, and other countries, LMA is widely used for resuscitation of subjects with OHCA as an alternative to airway management, such as ETI (8,19,24). However, it also has some shortcomings, such as poor sealing, displacement during transportation, flatulence, food reflux aspiration, and pharyngeal wall or epiglottis edema.

BVM ventilation is recommended by the 2015 American Heart Association Guidelines Update for Cardiopulmonary Resuscitation and Emergency Cardiovascular Care and the European Resuscitation Committee (30,31) when professionals perform early CPR on subjects with OHCA. With respect to bystander CPR with chest compression only, a prospective multicenter, non-randomized controlled trial SOS-KANTO (18) reported that the arterial potential of hydrogen (pH) of the extracorporeal ventricular fibrillation or pulseless ventricular tachycardia was higher in the LMA group than in the BVM group, but LMA was not as beneficial as BVM in improving the respiratory status of such subjects. A large study of 649,359 subjects in Japan with OHCA found that subjects with BVM had better neurological outcomes after 1 month than subjects with LMA or ETI, and this was thought to be related to the benefits of sustained chest compressions (32).

In our analysis, although without significance, the use of ETI offered an absolute higher survival rate for subjects with OHCA in comparison to BVM and LMA, in the meanwhile, ETI was also associated a higher success rate of recovery and the rate of hospital admission after successful recovery. However, from the trend of the forest plot, the success rate of recovery and the rate of live admission were similar for subjects treated with BVM and LMA. Therefore, for unskilled rescuers, to reduce the interruption time of chest compression and improve the success rate of resuscitation, BVM should be preferred for early CPR. But according to our study, ETI should be considered when the mask cannot be fixed to ensure ventilation or long-distance transportation.

Pre-hospital first aid in European countries, Canada, Australia, and the United States had excellent outcomes for ETI for advanced airway management. Although emergency medical services (EMSs) are available in most Asian countries, emergency personnel have limited experience with pre-hospital ETI (33,34). A study by Kajino (21) showed that professionals can quickly and effectively perform successful ETI for subjects with OHCA. Wang et al. (35) found that ETI was associated with a better 24-hour survival rate and a higher discharge rate and was more effective in achieving ROSC in comparison to LMA. However, EMSs in many Asian countries still encourage pre-hospital first-responders to use LMA as the most common method of airway management. Our meta-analysis of the success rate of recovery, survival to admission rate, and survival to discharge rate of subjects with OHCA demonstrated that ETI is more beneficial than LMA for subjects with OHCA. This may be due to the following reasons. Firstly, LMA may shift the ventilation quality during transport and care of subjects. Secondly, pre-hospital first-responders are unfamiliar with the LMA procedure. Finally, in comparison with LMA, ETI can better manage airway secretions and reduce the aspiration of gastric reflux, which is helpful in improving the respiratory status of subjects (23).

There are several limitations to our study: firstly, not all included studies were prospective comparisons, leading to data deficiency and potential selection and reporting bias in some outcomes; secondly, the majority of included studies reported an insufficient follow-up period, consequently, we were unable to evaluate long-term outcomes, such as 1 year survival rate after OHCA; third, small-study effects refer to the pattern that small studies are more likely to report beneficial effect in the intervention arm (36), although the funnel plot showed there was no obvious study bias in our analysis, some small-sample studies could still potentially affect the outcomes; finally, we have to admit the methodology of ITC has limitation of estimating HR, substantially diminishing the statistical significance, thus its evidence level is not as strong as traditional meta-analysis.

For subjects with OHCA, ETI should be considered for airway management as early as possible, which can improve the subject’s success rate of recovery and survival to admission rate. In future, large-scale, multi-center, randomized controlled studies should be conducted to evaluate the exact efficacy of BVM, ETI, and LMA for the first aid of subjects with OHCA, particularly the long-term effects, such as survival and discharge rates and quality of life after discharge.

Funding: This work was supported by the following funding (Funder: L Rong): Science and Technology Foundation of Guangdong Province, China (2012B061700046), and the Research Program for Colleges and Universities in Guangzhou (2012C054).