Circular RNAs (circRNAs) are increasingly implicated in different biological processes. A recent report by Tagawa et al., Proc Natl Acad Sci U S A [2018] investigates the circRNAs expressed following infection by Kaposi sarcoma herpesvirus (KSHV). We discuss the proposed biological functions of such circRNAs in enhancing or repressing virulence, as well as the possible utility of subsets of circRNAs in antiviral therapy.

KSHV, also known as human herpesvirus 8 (HHV-8), is a gamma herpesvirus first identified in tissues from AIDS (acquired immunodeficiency syndrome) patients with associated Kaposi sarcoma (KS) (1). KSHV was later linked to different KS forms as well as to neoplastic and lymphoproliferative diseases (2-5). KS in the United States accounts for ~4% of cases worldwide (6,7), and is among the most prominent cancers in patients with AIDS (8). Besides transcribing several protein-coding mRNAs, the KSHV genome expresses multiple noncoding RNAs (ncRNAs), including microRNAs (miRNAs) and long ncRNAs (lncRNAs). In addition, the KSHV genome can also give rise to circRNAs, as recently discovered (9-11).

CircRNAs can arise from linear precursor RNAs transcribed from coding and noncoding genes, and can contain exonic and intronic sequences. Many circRNAs are generated via backsplicing events whereby the 5' and 3' ends are covalently religated (12). Due to the lack of exposed 5' and 3' ends, circRNAs are protected by exonuclease degradation and hence are more stable than the linear precursor RNAs. Recent progress in RNA sequencing technology has revealed that circRNAs are highly abundant and are often expressed in specific tissues, drawing immense interest to understand their functions in health and disease (13-18). Some insight into circRNA function has been gained from evidence that circRNAs can interact with proteins and other RNAs (12). For instance, abundant circRNAs can bind miRNAs, acting as miRNA ‘sponges’ and inhibiting miRNA-mediated suppression of mRNAs. Similarly, the interaction of circRNAs with RNA-binding proteins (RBPs) can affect the function of RBPs upon other cellular targets (19). CircRNA interactions with other RNAs (e.g., mRNAs, lncRNAs) and with DNA have been shown or proposed to influence many cellular processes (12).

In a recent study, Tagawa and colleagues elegantly showed that upon KSHV infection, human umbilical vein endothelial cells (HUVECs) expressed many circRNAs (20). RNA-Seq analysis revealed numerous backspliced junctions from the KSHV genome, a finding that was validated by individual circRNA detection (21). By employing TREx-BCBL1 cells expressing RTA, an important modulator of the viral lytic phase, the authors discovered that viral circRNAs were more abundant in the lytic phase than the latent phase. In line with this finding, increased RTA levels in lymph node biopsies from KSHV-infected individuals correlated positively with high levels of circRNAs. As the number of tested biopsies was limited to one individual per condition, it would be important to extend these interesting observations to additional individuals in future work. KSHV-derived circRNAs kcirc55 and kcirc97 were proposed to be implicated in cell proliferation; other KSHV-encoded circRNAs were postulated to influence gene expression during apoptosis and other tumor-related processes.

Using circRNA microarrays, the authors further identified circRNAs with altered expression levels in KSHV-infected HUVECs and human B lymphocytes (MC116 cells) (20). Interestingly, several of these circRNAs harbored multiple binding sites for KSHV miRNAs, leading the authors to hypothesize that the circRNAs derived from the human genome might sequester KSHV-derived miRNAs and prevent their repressive impact upon target mRNAs. The authors focused on hsa_circ_0001400, which is highly abundant in HUVECs and is moderately elevated following infection; by contrast, the levels of linear transcript RELL1 mRNA, which overlaps partly with hsa_circ_0001400, was not affected in KSHV-infected cells. While hsa_circ_0001400 levels did not change in the different viral phases, latent or lytic, its overexpression reduced the levels of viral LANA and RTA mRNAs, and its silencing elevated these mRNAs. In future work, it will be important to investigate other cellular circRNAs increasing after infection, as their function may synergize with the effects of hsa_circ_001400 in suppressing the expression of KSHV genes. Among a subset of interferon-stimulated proteins, only TNF was upregulated by hsa_circ_0001400, suggesting that the circRNA might function in antiviral host defense via TNF production. Given the clinical implications of the findings in this report, the possibility that TNF is an effector of hsa_circ_0001400 actions also warrants future investigation.

The identification of viral and mammalian circRNAs produced after KSHV infection raises many interesting questions, particularly regarding the mechanisms whereby KSHV circRNAs might promote virulence while mammalian circRNAs might prevent it (Figure 1). Analyzing the abundance, expression timeline, and localization of these circRNAs, as well as identifying en masse the interacting factors—proteins, RNAs, DNA, and other macromolecules—will shed critical light on the functions of circRNAs in mounting and counteracting KSHV infection. More broadly, the report by Tagawa et al. sets the stage for investigating the expression and function of circRNAs produced in response to other viral infections. Similar to other areas of circRNA biology, there is urgent need for global approaches to study circRNA sequences, copy numbers, associated factors, and possible translation profiles of circRNAs synthesized during the viral response. 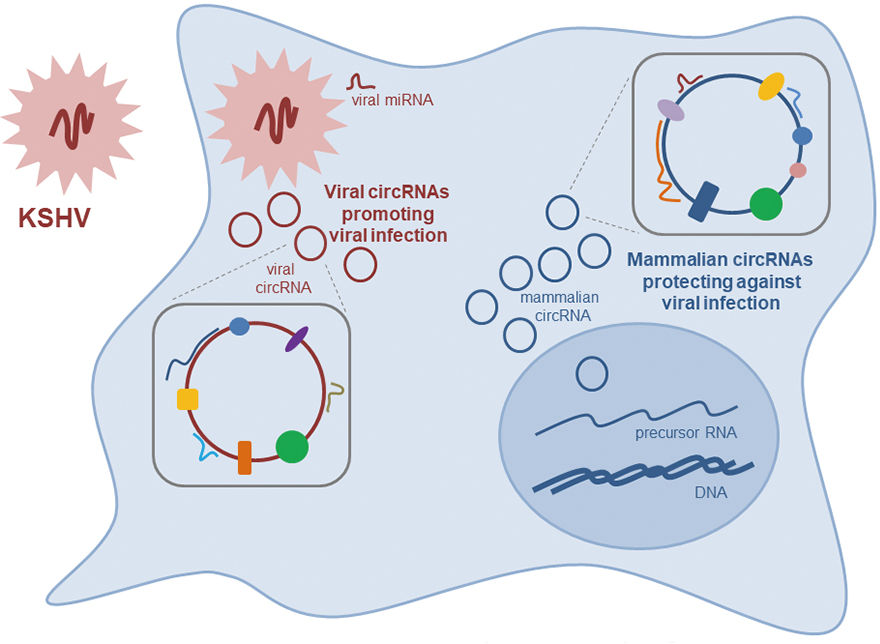 Figure 1 CircRNAs expressed following KSHV infection can promote or repress viral infection. CircRNAs arising from either the viral genome (red) or the cellular genome (blue) are hypothesized to influence the viral response at least in part by associating with a range of factors. CircRNA-interacting factors, including diverse proteins (filled shapes) as well as coding and noncoding RNAs (lines), are postulated to modulate the impact of circRNAs following viral infection. KSHV, Kaposi sarcoma herpesvirus; circRNA, circular RNAs.

Finally, as suggested in the Tagawa report, some endogenous circRNAs may provide defense against viral infection. These circRNAs could be exploited therapeutically to prevent or reduce viral disease. For example, administration of hsa_circ_001400, possibly in combination with other cellular circRNAs induced by KSHV, might engender a more robust anti-viral response. Similarly, antagonization of KSHV-encoded circRNAs could have additional therapeutic benefit. Towards these goals, it is imperative that biological methods be developed to produce protective circRNAs and antagonizing RNAs at a large scale, as well as methods to direct them to target tissues for antiviral outcomes in the clinic.