Colorectal cancer (CRC) is the third deadly cancer worldwide, and its incidence increases with age (1). Despite the fact advances in multimodality therapy have been made in recent decades, the recurrence and mortality rate of CRC did not substantially decrease (2-4). The detailed molecular mechanisms related to CRC tumorigenesis and progression remain poorly understood (5,6). Therefore, it is urgent to identify novel biomarkers with prognostic and/or therapeutic values in CRC to further unveil the mechanisms involved in CRC occurrence and development.

Long non-coding RNAs (lncRNAs) are a set of large transcripts (more than 200 nucleotides in length) with limited protein-coding potential (7,8). Emerging evidences have suggested that lncRNA is an important class of regulators, which involves in various biological processes, such as cellular development, immune regulation, especially tumorigenesis and progression (9,10). Notably, accumulating studies reveal that dysregulation of lncRNAs are associated with tumorigenesis and progression in many types of cancer (11-13). For example, LncSox4 interacting with Stat3 and their complex directly binds to the Sox4 promoter region to initiate the transcription of Sox4, which promotes the self-renewal of liver tumor-initiating cells (14). LncRNA PCAT1 directly binds to FKBP51, leading to activation of AKT and NF-κB signalings in castration-resistant prostate cancer (15). We previously identified several lncRNAs (including FEZF1-AS1, UCA1, LINC00152, and SNHG6), which exert tumor-promoting functions in CRC (16-19).

A total of 86 paired CRC tissues and adjacent NCTs used in this study were collected from the Affiliated Hospital of Jiangnan University. Our study was approved by the Clinical Research Ethics Committees of Affiliated Hospital of Jiangnan University, and all specimens were collected with informed consent. After tumor resection, tissue specimens were immediately snap-frozen in liquid nitrogen and then stored at −80 °C for total RNA extraction. The detailed information of patients was listed in Table 1. 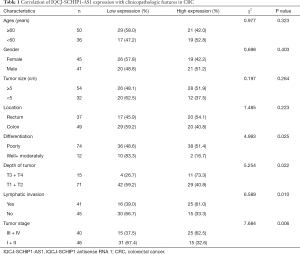 Total RNA was extracted from tissues and cells with TRIzol Reagent (Invitrogen, USA) according to the manufacturer’s instructions. Total RNA was then reversed transcribed for complementary DNA (cDNA) synthesis using HiFiScript cDNA Synthesis Kit (CWBIO, China). Quantitative RT-PCR (qRT-PCR) was performed using UltraSYBR Mixture (With ROX) (CWBIO), in a total volume of 16 µl containing cDNA, 2× UltraSYBR Mixture (With ROX), 0.2 µM of each primer and ddH2O. The primers used for qRT-PCR were listed in Table S1. β-actin was used as the internal control.

Cell Counting Kit 8 (CCK8, Dojindo, Japan) and colony formation assay were used to evaluate cell proliferation ability. For CCK8 assay, cells were seeded in a 96-well plate for 4 days, and the absorbance was measured at 450 nm once a day according to the manufacturer’s instructions. For the colony formation assay, cells (1,000) were plated in 6-well plate and cultured in DMED containing 10% FBS at 37 °C for 2 weeks. Colonies were then fixed in methanol, and stained with 0.1% crystal violet (Beyotime, China) for 30 min before counted.

HCT116 and LoVo cells were harvested 48 h after transfection. For cell cycle analysis, cells were fixed in chilled 75% ethanol at 4 °C overnight, and subsequently re-suspended in 800 µL of phosphate-buffered saline. Next, the fixed cells were stained with Propidium Iodide (PI, CWBIO) according to the instruction for detecting cell cycle progress, and then assessed by flow cytometer system (BD Biosciences, USA) to analyze the percent of cell numbers in different phase of cell cycle. For cell apoptosis analysis, transfected cells were harvested by Trypsin-EDTA Solution (Beyotime). Double staining with 7-amino-actinomycin D (7-AAD) and Annexin V-phycoerythrin (PE) was performed using the Annexin V-PE/7-AAD Apoptosis Detection Kit (CWBIO) according to the manufacturer’s recommendations. Then, the cells were analyzed by flow cytometer system to estimate the percentage of cell apoptosis.

Statistical analyses were performed by the analysis software SPSS 23.0 software (IBM, USA) or R software (version 3.5.1). The GraphPad prism 6.0 software and R software were utilized to make diagrams. The most appropriate cutoff values for IQCJ-SCHIP1-AS1 were obtained by generating receiver operating characteristic (ROC) curves. The Pearson χ2 test or Fisher’s exact tests was used to analyze the association between the expression of IQCJ-SCHIP1-AS1 and clinicopathologic factors. Kaplan-Meier survival analysis and the log-rank test were used to determine differences in survival rates. Survival data were also evaluated using Cox regression model. Student’s t test was used to determine significant differences of other continuous data. P values less than 0.05 were considered as statistically significant.

Levels of IQCJ-SCHIP1-AS1 expression are decreased in CRC tissues 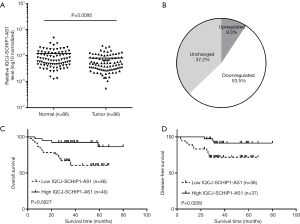 To study the correlation between IQCJ-SCHIP1-AS1 expression and clinicopathologic characteristics, the 86 CRC patients were classified into a relatively high (n=40) versus low group (n=46) using a cut-off value selected by the ROC curve (Figure S1; Table S2). As summarized in Table 1, decreased expression of IQCJ-SCHIP1-AS1 was significantly associated with poor differentiation (poorly vs. well+moderately; P=0.025), advanced depth of tumor (T3 + T4 vs. T1 + T2; P=0.022), lymphatic invasion (yes vs. no; P=0.010), and advanced tumor stage (III + IV vs. I + II; P=0.006). However, IQCJ-SCHIP1-AS1 expression was not associated with other clinicopathologic factors. 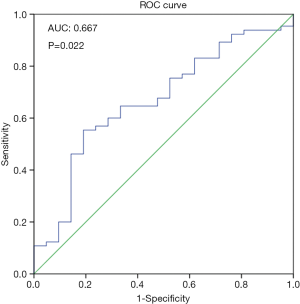 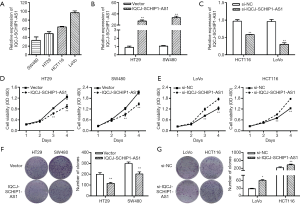 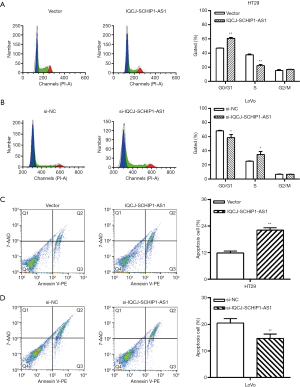 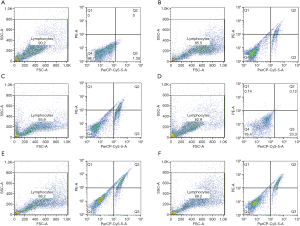 Functional and pathway analysis of IQCJ-SCHIP1-AS1 in CRC

To explore the underlying mechanisms of IQCJ-SCHIP1-AS1 in CRC, the gene expression profiling in IQCJ-SCHIP1-AS1-depleted HT29 cells has been studied. Bioinformatics analyses were performed based on the top 1,502 DEGs in IQCJ-SCHIP1-AS1-silenced cells compared with the control cells. GO terms of the top related DEGs were mainly involved in several DNA replication-related biological processes (Figure 4A). Besides, both KEGG analysis and GSEA showed that the top related DEGs mainly involved in cell cycle, DNA replication and p53 signaling pathways that have strong correlation with tumorigenesis and progression (Figure 4B,C). Several key DEGs in these pathways, including cell cycle (SKP2, E2F1, CCNB1), DNA replication (MCM2, FEN1) and p53 signaling pathways (GADD45A), were selected and validated further by qRT-PCR. The results confirmed our results of RNA-seq analysis (Figure 4D). In conclusion, we observed that these genes potentially regulated by IQCJ-SCHIP1-AS1 mainly concentrated in cell proliferation related pathways, which were consistent with the results of functional assays. 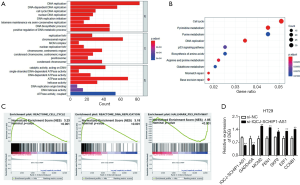 Recently, increasing evidences indicate that large numbers of lncRNAs were found to be aberrantly expressed and involved in the occurrence and development of human cancers (22-24). Such lncRNAs function as oncogenes and tumor suppressors and their aberrant expression is often associated with the prognosis of patients, which renders lncRNAs as the valuable prognostic biomarkers. In the present study, we provided the first evidence that IQCJ-SCHIP1-AS1 was downregulated in CRC, and was associated with poor prognosis. Functional assays revealed the proliferation-inhibiting effects of IQCJ-SCHIP1-AS1 in CRC cells. All these data indicated that IQCJ-SCHIP1-AS1 may function as a novel tumor suppressor in CRC.

Previous studies have showed the key regulatory roles of lncRNA in tumors. For example, lncRNA MALAT1 is reported to be overexpressed in variety of tumor types, including CRC, and identified to be associated with the short overall survival rate of CRC patients (25). Lnc-Spry1 is downregulated and mediates TGF-β-induced epithelial–mesenchymal transition by transcriptional and post-transcriptional regulatory mechanisms (26). High lnc-ZNF180-2 expression is associated with poor outcome in clear cell renal cell carcinoma (ccRCC) patients and might act as a biomarker to predict the survival of ccRCC patients (27). Our previous study demonstrated that LINC00152 functions as an oncogene to promote cell proliferation, metastasis and chemoresistance of CRC cells by regulating miR-139-5p/Notch1 axis (17). We also showed that FEZF1-AS1 promotes tumor proliferation and metastasis by regulating PKM2 signaling (18). In addition, we revealed that UCA1 enhances cell proliferation and drug resistance in CRC cells though inhibiting miR-204-5p, a well-known tumor suppressor (16,28).

In conclusion, we identified a novel lncRNA, IQCJ-SCHIP1-AS1, that was down-regulated in CRC and predicted poor prognosis. In addition, we demonstrated, for the first time, the proliferation-suppressing functions of IQCJ-SCHIP1-AS1 in CRC. The present work suggests that IQCJ-SCHIP1-AS1 is a potential therapeutic target and prognostic factor for CRC.

The authors thank for Dr. Chen Chen for critical reading of this article.

Ethical Statement: The study was approved by the Clinical Research Ethics Committees of Affiliated Hospital of Jiangnan University and written informed consent was obtained from all patients.