Tracheal diverticula are rarely encountered entity and usually project to the right side of thoracic inlet resulting from the presence of esophagus on the left. Tracheal diverticulum was first described by Rokitansky in 1838 with overall prevalence to be approximately 1% (1), whereas the comprehensive application of multi-detector computed tomography (MDCT) in recent years results in a higher prevalence of 3.7% to 9.5% (2).

There are two types of tracheal diverticula, congenital and acquired, varying from sites, characteristics to histology (3,4). Most tracheal diverticula are often asymptomatic and without special treatment. They may, however, act as a reservoir for sputa, thereby giving rise to tracheobronchial chronic inflammation or oppression symptoms such as cough, hemoptysis, dyspnea, dysphagia, stridor and neck lump sensation, etc. (5). In addition to dysphagia and burping, which may be either the consequence of the diverticulum or its cause, as a result of direct oppression to recurrent laryngeal nerve or phrenic nerve (6). Symptomatic diverticulum can give conservative treatment such as anti-inflammatory, postural drainage, etc. Transcervical resection or endoscopic laser surgery or electrosurgery should be considered for patients with severe symptoms or combined with repeated tracheobronchial inflammation. However, there is still insufficient evidence to recommend the optimal therapeutic schedule at present (7). We describe the treatment procedure for a special tension tracheal diverticulum with rare symptoms of dysphagia and dizziness for the first time.

A 61-year-old female was referred to our hospital of a 6-week history of progressive dysphagia and dizziness, without dyspnea, dysphonia, productive cough and neck pain. Previous history of trauma and surgery is negative. A plain chest radiography showed a radiolucency image at the base of the neck, adjacent to the trachea on the right side (Figure 1A). Further chest MDCT and three-dimensional reconstruction demonstrated this 4 cm × 5 cm lesion with a thin wall on the right posterolateral wall, without secretions in its cavity and connection to the trachea was invisible. The lesion had caused oppression of esophagus, trachea and displacement of the right common carotid artery to the posterolateral side, thus was thought to be the cause of progressive dysphagia and dizziness (Figure 1B). The lesion was treated as a trachea cyst firstly owning to no observation of channel between the entity and trachea on the image, and the symptoms remission after interventional sclerotherapy by anhydrous ethanol (8). The fine needle was percutaneous punctured into the lumen under the guidance of CT during the interventional operation. Iohexol was injected into the cavity after redraw gas without overflow the sac or enter the trachea. Then the gas in the sac was fully extracted followed by the injection of anhydrous ethanol into the lumen and achieving the purpose of sclerosing it. The patient recovered well, whereas, the lesion soon recurred after 2 weeks of interventional operation (Figure 2), therefore the diagnosis was modified as trachea diverticulum finally. The patient received surgery due to nullity of conservative treatment and interventional sclerotherapy.

Figure 1 Pretreatment imaging of tension tracheal diverticulum. (A) Chest plain film showing a radiolucency Image adjacent to the right base of the neck; (B) a displacement of the trachea (green arrow) and right internal carotid artery (red arrow) owing to the high pressure of tracheal diverticulum on coronary chest CT. 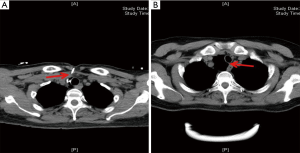 Surgical resection of the tracheal diverticulum was performed with a transcervical incision. The lesion was located in the inferior pole of the right thyroid lobe after separating the strap muscles. Dissociate carefully along the edge of the lesion, a narrow pedicle was found linking to the right rear membrane of the trachea (Figure 3A). There was no septum in the cavity after opening the diverticulum, whereas with a small flapper channel to the tracheal lumen (Figure 3B). The diverticulum neck was stapled by a 6-cm liner stapler, meanwhile the tracheal wall was well formed (Figure 3C). Histopathological analysis of the resected specimen showed tracheal mucosa epithelium only, which tended to an acquired tracheal diverticulum. The patient recovered well and was discharged 3 days after the operation. Chest MDCT and three-dimensional reconstruction revealed that the trachea and right common carotid artery returned to their normal position and morphology 4 weeks after surgery (Figure 3D), meanwhile this patient has a well recovery and her symptoms disappeared. Tracheal diverticulum is a rare benign disease without symptoms, even with clinical symptoms appear, most of them are caused by the oppression of peripheral cavity organs due to pathological changes such as tracheal diverticulum or related inflammation, and the solid tissue is rarely associated with the symptoms due to strong oppression resistance. Therefore, there was no report of dizziness caused by common carotid artery oppression before. In this case, there’s not only the symptoms of the esophagus, but also the oppression of right common carotid artery, considering the fact that there’s a tiny one-way flapper channel between the trachea and diverticulum which resulting in the high pressure of the diverticulum. And for this reason, the misdiagnosis for intervention sclerotherapy and the recurrence of the disease have been caused. The use of MDCT has increased the rates of incidental findings for this lesion. However, the diagnosis of a trachea diverticulum with a small channel is still a matter of caution, which need further examination such as barium esophagography, esophagoscopy, bronchoscopy and endotracheal imaging if necessary, in order to reduce misdiagnosis and missed diagnosis.

Asymptomatic tracheal diverticulum needn’t treatment, while we recommend multi-disciplinary intervention for symptomatic ones, even surgery when necessary. Combining the experience in the management of this patient, we recommended that the use of liner stapler for transcervical resection of tracheal diverticulum plus tracheoplasty be a safe and effective way rather than interventional treatment.

Our case is a special tension tracheal diverticulum with rare symptoms of dysphagia and dizziness which has not been reported previously. Ultimately, the tracheal diverticulum relapsed after interventional sclerotherapy due to misdiagnosis of the disease followed by transcervical resection. Therefore, it is necessary to improve the understanding of tracheal diverticulum in clinical practice, and provide an optimal treatment for patients through detailed procedure.

Informed Consent: Written informed consent was obtained from the patient for publication of this paper and any accompanying images.