The burden of cardiac arrhythmias in sarcoidosis: a population-based inpatient analysis

Sarcoidosis is a granulomatous disease of unclear etiology, with myriad clinical presentations and involving various organ systems. The annual incidence of sarcoidosis in the United States (US) is approximately 10.9 per 100,000 in Caucasians and 35.5 per 100,000 in African-American population, respectively (1). Sarcoidosis is classically known to involve the lungs but rarely can also involve other organs such as heart, brain, and skin (2). Up to 5% of sarcoidosis patients are found to have cardiac involvement, with associated clinical manifestations such as ventricular arrhythmias, conduction abnormalities, heart failure and sometimes sudden cardiac death (SCD) (3-5). In a retrospective study, as many as half of the patients with sarcoidosis were found to have cardiac sarcoidosis on autopsy (2). Cardiac involvement accounts for almost 10–25% of all deaths from sarcoidosis in the US and is usually attributable to malignant arrhythmias and complete heart block (3,4). Importantly, some studies have described patients with isolated cardiac sarcoidosis, that is, with no evidence of sarcoidosis involvement in other organs (5). In a recent prospective study of 73 patients with cardiac sarcoidosis who were followed for a median period of 8.8 years, arrhythmias developed in 51 (86.4%) patients, and lack of pacemaker or defibrillator was one significant predictor of mortality in Cox regression analysis (6). Nery et al. suggested that the cardiac involvement should be considered in all sarcoidosis patients aged <55 years presenting with an unexplained atrioventricular block, and in patients with idiopathic cardiomyopathy and sustained ventricular tachycardia (7).

The underlying pathophysiology of cardiac sarcoidosis involves the formation of non-caseating granulomas, which may involve any part of the heart, although the left ventricle is the most commonly affected chamber (8). The cardiac pathologic features include three successive histological stages, i.e., edema, granulomatous inflammation, and fibrosis leading to post-inflammatory scarring (8). There are no gold standard criteria for the diagnosis, and the low yield of endomyocardial biopsy combined with the limited accuracy of various clinical criteria finally make the diagnosis very challenging (9). Because of these reasons, cardiac sarcoidosis is an under-recognized entity, which is unfortunate because is readily treatable with corticosteroids, and early diagnosis and treatment may prevent further progression and complications (9). With the rising prevalence of cardiac involvement in sarcoidosis, multiple small studies have searched for asymptomatic cardiac sarcoidosis in patients with systemic disease. However, limited data exist on burden and outcomes of arrhythmias by subtypes in sarcoidosis. This study aims at evaluating the US nationwide estimate of the burden and the differences in the outcomes of various subtypes of arrhythmias in inpatient sarcoidosis population.

The Healthcare Cost and Utilization Project’s National Inpatient Sample (NIS) was investigated from January 2010 to December 2014 for examining the burden of arrhythmias in sarcoidosis patients. International Classification of Diseases, 9th Revision, Clinical Modification (ICD-9-CM) code 135 was used to recognize ≥18 years patients with sarcoid as a primary discharge diagnosis. To minimize selection bias, the final study cohort remained exclusive of patients with the concomitant acute coronary syndrome, prior ischemic heart disease or any ischemic cardiomyopathy. The NIS is an administrative dataset generated by the Agency for Healthcare Research and Quality (AHRQ) from the data backed by participating states (10). The NIS database has been used effectively in the recent past to evaluate the burden of arrhythmias in various conditions and to recognize, track, and examine national patterns in drifts in hospitalization rates, hospital charges, quality and outcomes in terms of mortality and complications (11-13). The NIS is the largest all-payer database inclusive of Medicare, Medicaid, private insurance and uninsured hospitalized patients in the US (exclusive of the Federal, institutional and short-term rehabilitation hospitals). Each admission is anonymous and is kept as a unique record with one primary discharge diagnosis and up to 24 secondary diagnoses during that admission. Data on demographic details including age, gender, race, insurance status, comorbidities, hospital characteristics, and procedures were studied. The NIS contains all discharge data from 45 states, almost illustrative of a 20% stratified example of the US community hospitals. Discharge weights provided within the NIS were then used to produce national-level assessments. 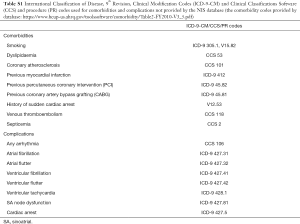 All analyses were performed using a complex sample design of SPSS Statistics 22 software (IBM Corp., Armonk, NY, USA), with the aim of considering clustering, stratification, and sampling weights. Therefore, subsequent estimates should be representative of the national inpatient admissions for sarcoid and arrhythmias. Univariate tests were performed to compare the baseline characteristic, comorbidity profile, and outcomes between patients with sarcoidosis with and without arrhythmias. These tests consisted of the Pearson chi-square test for categorical outcomes and student’s t-test for continuous outcomes, respectively. Statistical level of significance (alpha) was decided at 0.05. All outcome variables that were significant in univariate analyses were then incorporated in the final two-way hierarchical multiple logistic regression analysis.

After following a strict inclusion and exclusion criteria, as earlier mentioned, applying weights to the unweighted NIS dataset, we identified 369,285 inpatient admissions with a principal discharge diagnosis of sarcoidosis. Among these subjects, one-fifth (20%) had concomitant discharge diagnoses of arrhythmias (n=73,424). Table 1 shows the comparison of the baseline patient and hospital characteristics in sarcoidosis with and without arrhythmias. As predictable, older age was a risk factor for the development of arrhythmia (mean age 61.9 vs. 56.0 years; P<0.001). Sarcoidosis as a whole (with and without arrhythmia) was more commonly seen in females than in males (61.0% and 66.6%). Notably, arrhythmias were more common among male patients with sarcoidosis than in females (22.5% vs. 18.5%, P<0.001, Figure 1). Of the sarcoidosis-related admissions, whites (50.4%) were found to be arrhythmics more often than African American (44.2%). Interestingly, most admissions were nonelective in arrhythmic patients (85.5% vs. 80.3%, P<0.001) and during the weekdays, i.e., Monday–Friday compared to the remaining days of the week (78.7% vs. 80.5%, P<0.001). Most of the patients were insured by Medicare (45.7% vs. 58.0%, P<0.001). 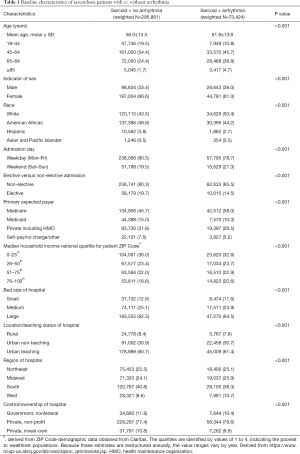 Table 1 Baseline characteristics of sarcoidosis patients with vs. without arrhythmia
Full table 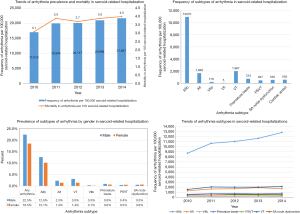 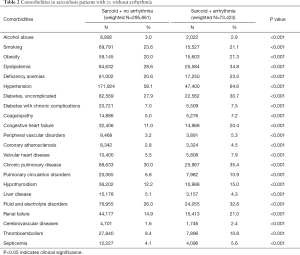 Table 2 Comorbidities in sarcoidosis patients with vs. without arrhythmia
Full table

Table 3 Outcomes in sarcoidosis-related hospitalizations with vs. without arrhythmia
Full table

Spectrum and burden of arrhythmias

The most frequent arrhythmia subtype in the sarcoid-related hospitalization (per 100,000) was atrial fibrillation [10,970] followed by ventricular tachycardia [1,967] and atrial flutter [1,665]. The other arrhythmic subtypes noted were premature beats [724], sinoatrial (SA) node dysfunction [535], paroxysmal supraventricular arrhythmias (PSVT) [467]. The least common arrhythmia was ventricular fibrillation and flutter. Cardiac arrest rate was 559 per 100,000 sarcoid patients. Atrial fibrillation was more common among male sarcoidosis patients (12.6% vs. 10.1%, P<0.001), with a significantly increased trend over the study period. The frequency of arrhythmia (per 100,000 sarcoid-related hospitalizations) and mortality (per 100 sarcoid-related hospitalizations) were seen to progressively increase over the study period (Figure 1).

In this study, we report the burden of arrhythmia in sarcoidosis patients in terms of types of arrhythmia, comorbidities, hospital LOS, and associated hospital charges. The important findings are as follows. Nearly one-fifth of sarcoidosis patients experience arrhythmias during hospitalization, which is a major concern on healthcare groundwork. Although sarcoidosis is more prevalent in females, arrhythmias more often occurred in males. Atrial fibrillation was the most common subtype followed by ventricular arrhythmias. We observed increasing trends in sarcoid-related hospitalizations with arrhythmias and subsequent in-hospital mortality during the study period. Sarcoidosis increased the odds of arrhythmia, whilst the presence of atrial or ventricular tachyarrhythmias and cardiac arrest significantly enhanced in-hospital mortality odds.

The most common age group of patients with sarcoidosis and arrhythmia was 45–64 years, which is similar to the findings of a previous study conducted by Zhou et al. (6). Although the sarcoidosis cohort predominantly comprised of females, arrhythmias were more common in males. Our findings are also supported by previous studies, which showed a male predominance of cardiac involvement in the sarcoidosis (14-16). Another study conducted by Morimoto et al. reported that although females had a higher incidence of sarcoidosis in general, the incidence of heart involvement was comparable in both genders (17). Our study also showed that the male sarcoid patient had the highest incidence of any type of arrhythmia. Sarcoidosis was also common in patients with African Americans descent, but arrhythmias were common in the white population. This could be due to the selection bias, as the final study cohort was mainly comprised of white population. In our study, patients with sarcoidosis and arrhythmia were most likely to be admitted to an urban teaching hospital. This finding is supported by a similar study indicating that urban areas have better diagnostic and management facilities, and better resources for early detection and advanced referral to higher care centers (18).

In terms of hospital outcomes, our study showed that the arrhythmic cohort presented with increased in-hospital mortality, hospital LOS and increased total hospital charges, which shows a huge burden of cardiac events in the sarcoidosis patients and its impact on the healthcare system. This is consistent with other previously published studies (3,19).

Hypertension was the most commonly present comorbidity in both groups. It was also seen that the arrhythmic sarcoidosis patients had the higher incidence of underlying comorbidities like a chronic pulmonary disease, diabetes, fluid and electrolyte disorders, and CHF. These findings are consistent with those reported by Patel et al. (18). A study conducted by Yazaki et al. showed that between 25% to 75% of patients with cardiac sarcoidosis present with CHF (20), and the presence of CHF indicates the progression of cardiac sarcoidosis to an advanced stage (21).

The most common subtypes of arrhythmias found in our study were atrial fibrillation, followed by ventricular tachycardia, and atrial flutter. This is in contrast to other studies, where ventricular tachycardia has been reported as the most common arrhythmia. Moreover, the incidence of atrial fibrillation increased progressively over the period of 5 years as opposed to other arrhythmias. The atrial arrhythmias are generally due to atrial enlargement secondary to ventricular dysfunction and/or pulmonary hypertension due to the core pulmonale. Our study also showed the increased presence of pulmonary disorders in the arrhythmia cohort. Some of this could also be due to the granulomatous infiltration culminating in atrial dilatation (22).

Although atrial arrhythmias were more common, cardiac arrests (including ventricular tachycardia and ventricular fibrillation) are associated with the maximum mortality rate in sarcoid-related hospitalizations. It was identified that supraventricular arrhythmias were not associated with significant mortality. Nevertheless, it is still important to identify atrial fibrillation as it carries therapeutic implications regarding thromboembolic risk. SVT can lead to inappropriate use of ICDs (23). They are several other studies supporting this finding (24,25). Therefore, an appropriate diagnosis is essential. One way to recognize atrial arrhythmias is by studying MRI as a study by Cain et al. showed that patients with atrial late gadolinium enhancement on MRI are threefold more likely to develop atrial arrhythmias than those with no evidence of gadolinium enhancement on MRI (26). The analysis of hospitalization trends showed that the prevalence of arrhythmia and mortality increased over the 5-year period. Other studies have also reported a similar trend (19,27,28). Our study has attempted to highlight the burden of arrhythmias in the sarcoidosis patient, which is one of the leading causes of mortality. Therefore, timely diagnosis and appropriate treatment can decrease the morbidity and mortality associated with this condition.

The NIS has few potential limitations being an administrative database, which should not be overlooked. Although we have excluded ischemic cardiomyopathy and myocardial infarction patients to minimize the selection bias as per previously validated methods, there remains a possibility of arrhythmias being classified as sarcoidosis-induced but actually, it is due to concomitant cardiovascular comorbidities. The histological investigational data and laboratory data were not accounted for in the analysis. Because of the retrospective nature of the database, we could not study the time frame from the diagnosis of sarcoidosis to arrhythmia development. The NIS does not include information about medication, which could have played a role in predicting the arrhythmia and related in-hospital mortality. Despite these limitations, the NIS is still the largest inpatient data source from the US hospitals and on weighing; data provided national estimates, which increased the generalizability of the results to an extent.

The rising prevalence, hospitalizations, and mortality associated with the arrhythmias in the sarcoidosis highlight the importance of heightened surveillance in these patients.