The kidneys maintain acid-base homeostasis (with the lungs controlling CO2) by reabsorbing large amounts of filtered bicarbonate (HCO3−) and excreting acid. Regulation of pH at both the cell level and organism level are important for many cellular functions and health. Both acidosis and alkalosis have both acute and long-term deleterious consequences. For instance, chronic acidosis leads to bone loss, muscle wasting, and progression of chronic kidney disease. The usual players in the mechanisms of regulation of acid-base balance are H+, HCO3−, excreted NH4+ which functions as an excreted acid, and urinary buffers, principally phosphate. Another player is citrate that is usually thought to play only a small role in overall acid-base balance in humans. Citrate inside cells is a Krebs cycle intermediate but citrate in the kidney and urinary space has several other roles. In addition to its role in acid-base homeostasis discussed below, citrate is a metabolic fuel for the kidney and very importantly functions as the most important endogenous inhibitor of calcium kidney stones.

Intriguingly, Zacchia et al. have now demonstrated that the major transport mechanism for citrate in the kidney, Na+ dicarboxylate cotransporter NaDC1, is regulated by acidosis very similarly to the major acid-base transporter Na+/H+ exchanger NHE3 (1). Using both in vivo and in vitro methods, this elegant study provides significant new understanding but also raises important questions about the interrelationship of acid-base homeostasis and citrate transport via NaDC1. To understand the potential implications requires some background on citrate transport and on acid-base homeostasis by the kidneys.

Citrate circulates in plasma at only very low levels (~0.1 mM) is freely filtered at the kidney glomerulus, and then 65–90% is reabsorbed in the proximal tubule (2,3). The extent of this reabsorption is crucial in that no other transport of citrate occurs along the nephron (4), leaving 10–35% of the filtered excreted into the urine. This urinary excretion provides several critical roles including (I) preventing calcium kidney stones by complexing calcium in a soluble form; and (II) excreting a potential base contributing to acid-base homeostasis. Citrate can be metabolized to 3 HCO3− and consequently represents a potential base; usually about 2–3 mmoles are excreted per day. During acidosis, this excretion goes down, contributing to the renal compensation for the acidosis. On the other hand, as urinary citrate declines, as during acidosis, the propensity for calcium stones increases. Since urinary calcium increases with acidosis (due to a variety of factors), chronic acidosis raises the risk of kidney stones considerably. So clinically, changes in urinary citrate and acidosis are interrelated.

As shown in Figure 1 the major mechanism of citrate reabsorption in the proximal tubule is NaDC1 located on the apical membrane of the proximal tubule (5). NaDC1 is in the large family of sodium coupled solute transporters. It preferentially transports dicarboxylates. Citrate is transported from the lumen as the dicarboxylate species (citrate−2) despite the tricarboxylate species, citrate−3 being more abundant based on the pKa of the third carboxylate group. At the apical membrane, 3 sodium ions are reabsorbed with each divalent citrate (citrate−2); this process is pH sensitive and competed by succinate and other Krebs cycle intermediates. Citrate−2 and citrate−3 rapidly equilibrate, the proportion determined by pH, so that as citrate−2 is reabsorbed, additional citrate−2 will be formed from citrate−3. The rate and extent of citrate transport will therefore be determined by the concentration of the transported ionic species citrate−2. 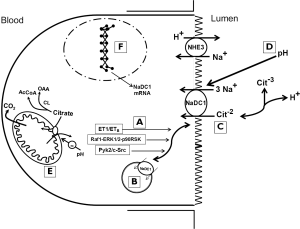 Figure 1 Schematic of mechanisms of acid-base regulation of citrate transport in the proximal tubule as discussed in the text. (A) The signal transduction mechanisms addressed by Zacchia et al. (1) that act via protein trafficking between recycling endosomes (B) and the apical membrane. (C) The transported ionic species citrate−2 increases as the pH decreases, [H+] increases. (D) pH also directly affects NaDC1 such that a lower pH stimulates transport. (E) Acidosis stimulates cytoplasmic and mitochondrial metabolism of citrate, promoting its reabsorption. (F) Acidosis also increases transcription of NaDC1 mRNA.

NaDC1 also reabsorbs other Krebs cycle intermediates such as succinate and α-ketoglutarate (αKG) which have been found to be important in paracrine signaling in the kidney (10). Their downstream delivery stimulates distal nephron G-protein coupled receptors GPCR91 (Sucnr1) and GPCR99 (Oxgr1) respectively. The former receptor stimulates renin release causing hypertension in some settings. αKG via Oxgr1 located on the apical membrane of type B and non-A-non-B intercalated cells in the collecting duct, stimulates bicarbonate secretion and salt reabsorption during alkalosis. The implications of this proximal-distal tubule signaling connection is currently not fully understood but provides other potential interrelationships between NaDC1 and other renal functions.

Despite the potential importance of variation in citrate excretion with acid-base derangements, the relative magnitude of this contribution needs to be acknowledged. Usually citrate excretion is in the range of 2–3 mmoles per day (6–9 mEq) (11). During acidosis, this may approach zero excretion. But net acid excretion by the kidneys is 30–70 mEq per day (NH4+ excretion plus titratable acid). Citrate excretion and HCO3− excretion (usually 3−) or potential alkali (citrate); these decrease with acidosis. During alkali loads or challenges, increased excretion of HCO3− and citrate occur as part of the renal compensation to correct any alkalosis. In humans, most of this excretion is HCO3− although citrate and other dicarboxylates contribute to the base excretion (11); in other mammals, a larger fraction of the excretion of base may be organic anions. The excretion of anions such as citrate rather than HCO3− will limit the elevation in urine pH during excretion of alkali; this lessens the propensity for the precipitation of calcium phosphate and formation of such stones.

Citrate reabsorption is regulated predominantly by acid-base balance. This regulation has several mechanisms. First, citrate metabolism in the kidney and in the proximal tubules more specifically, is altered by acid-base status. Cytoplasmic citrate lyase and mitochondrial aconitase are increased during acidosis. Metabolism of intracellular citrate will help drive citrate uptake across the apical membrane of the proximal tubule but the importance of this depends on the extent to which intracellular citrate concentrations are a rate limiting step at the apical membrane; this has not been firmly established (and was in fact controversial decades ago). But several mechanisms directly affect the transport process. First, the transported ionic species, the dicarboxylate citrate−2, gets significantly more abundant in the lumen of the proximal tubule as the pH declines which will occur to a greater extent during systemic acidosis (12). Also NaDC1 appears to be sensitive directly to pH (13). But additionally important, during acidosis more NaDC1 transporters are inserted into the apical membrane, and also more NaDC1 mRNA and protein are produced (14). These last mechanisms, particularly the insertion of transporters into the apical membrane from subapical vesicles, is the topic addressed by the recent Zacchia et al. paper (1).

Previous work by some of the same group has shown that acidosis increases NaDC1 activity via protein trafficking mediated via endothelin-1 (ET-1) activating the endothelin B receptor (ETB) (15). The recent paper extends this work to show that acid activation of NaDC1 involves two pathways, the nonreceptor tyrosine kinase Pyk2 and its downstream effector c-Src and in parallel the rapidly accelerated fibrosarcoma-kinase 1 (Raf1)/extracellular signal-regulated kinase 1,2 (ERK1,2)/p90 ribosomal S6 kinase (p90RSK) pathway. Surprisingly, these pathways with acidosis were not downstream of ET-1/ETB so that multiple redundant pathways appear to be involved with acidosis. To demonstrate these findings the authors used a cell culture model of the proximal tubule OKP cells overexpressing NaDC1 and ETB as they have before. In addition, they used mouse studies to validate some of their findings of acidosis. Particularly intriguing is that very similar findings have been made by the same group in regard to NHE3, the main mechanism of HCO3− reabsorption in the apical membrane of the proximal tubule (16).

HCO3− is freely filtered at the glomerulus so that the first role of the kidney in acid-base homeostasis is to reabsorb the large amounts of filtered HCO3−, some 4,000 mEq per day, reviewed in (17). Eighty percent of this reabsorption occurs in the proximal tubule with the remaining reabsorbed more distally. On the apical membrane of the proximal tubule, two proteins are responsible, NHE3 and H+-ATPase, the former playing the dominant role. Both secrete H+ which reacts with filtered HCO3−, converting it to H2O and CO2 which are readily permeable and reabsorbed. The reaction of H+ + HCO3− ↔ CO2 + H2O is facilitated by both luminal and intracellular carbonic anhydrase, isoforms IV and II respectively. The process of HCO3− reabsorption also requires a basolateral HCO3− transport process in series with the apical H+ secretory process; in the proximal tubule this is a Na+ coupled HCO3− cotransporter which transports HCO3− out of the cell into the basolateral aspect, and into the peritubular blood. The focus here is on the critical apical NHE3, the protein responsible for most of the HCO3− transport and in fact Na+ reabsorption in the proximal tubule. This protein also facilitates NH4+ secretion from ammonia made from glutamine in the proximal tubule cell.

Regulation of NHE3 occurs from many physiologic directions but perhaps most importantly from acid-base status (18). Acidosis stimulates NHE3 via many mechanisms, several roughly in parallel with those described above for NaDC1: direct substrate concentration (intracellular H+), allosteric effect (19), phosphorylation, and probably transcriptional effects (20). The latter is actually less clear cut than for NaDC1 (21). The signal transduction pathways for NHE3 might have been anticipated to vary from NaDC1. The Alpern and Preisig groups in a series of studies had previously shown that acid activation of NHE3 requires ETB receptors and separately the Pyk2/c-Src and Raf1-ERK1/2-p90RSK signaling pathways (but again, not downstream of ET-1 → ETB) (16). For the discussion here, the particulars of the signal transduction will not be reiterated. But for the separate proteins and processes of NHE3 and NaDC1 (Na coupled acid secretion and Na+ coupled citrate reabsorption) to have such similarities in the signaling from acidosis is remarkable and intriguing. Of note however is that NHE3 and apical Na+/H+ exchange in the proximal tubule are known to be influenced by many hormones and physiologic stimuli, whereas NaDC1 is influenced by few factors other than acid-base status. In addition to those factors discussed above, NHE3 is altered by adrenergic stimuli, angiotensin II, dopamine, glucocorticoids, insulin, PTH, and nitric oxide among others. In contrast, NaDC1 is altered by PKC, but few other factors than acid-base status. We have shown that proximal tubule apical citrate transport is sensitive to calcium and magnesium, probably via an apical calcium sensing receptor (9), but this transport is likely not via NaDC1.

The paper by Zacchia et al. importantly demonstrates that the major transport mechanism for citrate in the kidney, Na+ dicarboxylate cotransporter NaDC1, is regulated by acidosis very similarly to the major HCO3− transporter Na+/H+ exchanger NHE3. The importance of these findings relates to the interrelationship of acidosis, kidney stones, and urinary citrate. Many questions are raised by these studies. What are the common elements in the two transporters NHE3 and NaDC1 that account for the shared signal transduction mechanisms? What evolutionary pressures induced this commonality? Can these pathways be exploited to treat kidney stones (by raising urinary citrate) or acid-base disorders? Are there diseases that affect these pathways? (diseases affecting these pathways might not be apparent in acid-base parameters per se because of the redundant pathways and processes to regulate acid-base homeostasis). Both kidney stones and acid-base disorders are common with significant morbidity and consequence. Further understanding of the physiology and pathophysiology of these processes are needed.