Trends of snowboarding-related fractures that presented to emergency departments in the United States, 2010 to 2016

Snowboarding has grown to be one of the most popular winter sports in the United States (1). It has risen in popularity since its introduction in the 1998 Winter Olympics, and has drawn the participation of individuals at different ages and skill levels (2), having attracted participation from approximately 7.6 million Americans during the 2015–2016 season (1). Moreover, there are a variety of snowboarding styles that have evolved that require an increased level of skill (3). Concomitant with increased participation in the sport, there has been a growth in the injury rates among both recreational and elite snowboarders (4,5).

Many epidemiological studies often focus on identifying injury trends in snowboarding in comparison to skiing (5-7). While these studies have identified upper extremity injuries as the most prevalent among snowboarders, they do not offer a broader understanding of these specific injuries. Other investigations have compared injury patterns between professional and recreational participants of snowboarding, and have found an increase in injury distribution throughout the lower extremity of professional athletes (4,8). While a few studies have focused on examining injuries of specific body regions (2,7), there is paucity of literature that has reported on the most common types of injuries to all body parts, such as fractures, that can be generalized to the public.

ED data from snowboarding-related injuries in the United States from 2010 to 2016 were identified and reviewed using the National Electric Injury Surveillance System (NEISS) database. The NEISS database is a national database that is obtained from a sample of approximately 100 hospitals in the United States and its territories, and is managed by the United States Consumer Product Safety Commission (CPSC) (9). Information was collected on all injuries that presented to the 100 hospitals that make up the stratified probability sample. The hospitals are grouped into five strata, of which four are based on the hospital size (i.e., annual number of ED visits), and one that is comprised of children’s hospitals. The CPSC performs annual sampling frames of all hospitals that have ED’s in the United States, including the total number of ED visits. Data for each case collected from NEISS hospitals are assigned a sample weight that is determined by the inverse of the probability of selection for the hospitals in each stratum. Adjustments are made to these data to make sure that hospitals comply with required specifications, and new sampling frames are used to ratio-adjust the sample’s statistical weights for the present sample of NEISS hospitals to more accurately represent the total number of annual ED visits for the entire United States population (10). The ratio adjustment is the ratio of the known total number of hospital ED visits in a population frame over the estimated total ED visits in the sample of hospitals (11). At each hospital, the variables that are collected include age, sex, race, date, diagnosis category, body part injured, injury location, disposition, and a narrative field for describing the injury (11).

The NEISS database was queried for all patients who were between the ages of 2 and 81 years and presented to the ED with a snowboarding-related injury (NEISS Manual, product code 5031) between January 1, 2010 and December 31, 2016. The weighted estimate of the number of injuries was obtained by using the NEISS statistical weight calculations included within the data.

All of the data was compiled in an excel spreadsheet (Microsoft Corporation, Redmond, Washington, USA). Data was analyzed using SPSS version 24 (IBM Corporation, Armonk, New York, USA). A P value of less than 0.05 was the threshold for statistical significance. Descriptive statistics were performed and reported as frequencies and percentages or means and standard deviations. A linear regression analysis was performed to analyze annual trends of snowboarding-related fractures and the snowboarding-related fractures by body part; this was reported as the correlation coefficient (r) and the coefficient of determination (R2). 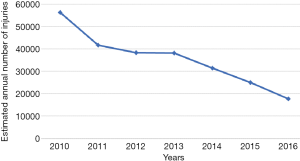 Figure 1 Trends of all snowboarding-related injuries. 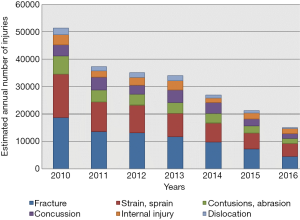 Figure 2 Snowboarding-related injury trends from 2010 to 2016 for six most common injury types. 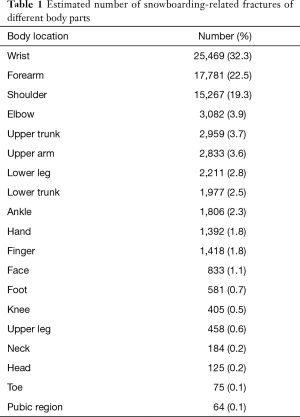 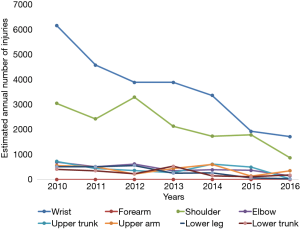 Figure 3 Annual trends of the most common snowboarding-related fractures.

Snowboarding has consistently attracted increased participation by millions of Americans over the last 30 years. As is the case with skiing, the inherent nature of snowboarding predisposes participants to an increased risk of various musculoskeletal injuries with unique injury patterns. Several studies have compared the injury patterns of snowboarding and skiing, yet few recent studies have attempted to examine the incidence and trends of snowboarding-related fractures within the United States population. The present study found that from 2010 to 2016, there was an overall decrease in snowboarding-related injuries. Additionally, the most prevalent types of injuries were fractures involving the upper extremity; specifically, the wrist, forearm, and shoulder.

There were several limitations to this study. The NEISS database employs a probability model to extrapolate injury trends within the population based on data from a collection of EDs in the United States. The database was compiled by sampling a fixed number of hospitals and using these samples to generate a weighted approximation of the total number of injuries for the population. This data may lead to inaccurate injury estimates because the data must be ratio-adjusted based on the hospitals used for the sample to create valid statistical weights. However, this process of sampling hospitals throughout the United States may permit this study’s findings to be more applicable to the general population. Additionally, the database cannot account for injuries that were seen or addressed outside of the ED, such as patients who were seen at outpatient clinics or by their primary care physicians. As with any large dataset, the NEISS database may also be subject to errors in data collection or entry. Despite these limitations, the findings of this study provide snowboarding participants with pertinent information that may help identify trends and rates of activity-related injuries, and might contribute to measures to further reduce the incidence of snowboarding-related injuries.

Ethical Statement: This study used publicly available de-identified data that was exempt by the hospital’s Institutional Review Board.